No more sleeps! Piñata is notoriously anxious to get started in the morning. Straws told him he wasn’t allowed to get up until he heard me pop my pad and she started to move. I decided to have a little fun with him. I woke up, smoked a cigarette, and quietly deflated my pillow. I could see his head poking out of his quilt watching me. I dragged out my morning routine as long as I possibly could. The minute I popped my sleeping pad he was up and poking Straws to get up. I might have taken a little too much joy in torturing him, but I know Straws and Z appreciated the extra sleep. We had planned on getting up early to watch the sunrise, but we didn’t have a good view. We made due with making coffee in the food prep area. I had the brilliant idea of packing out breakfast burritos from Many Glacier. Z, Straws, and Piñata cooked there’s in olive oil over a camp stove. Surprisingly I was still full after all the food I ate last night. I stuck to my coffee drink and a few Hostess chocolate donuts. We were joined by a foursome who we did not see last night. Every Labour Day weekend the Mom, Dad, adult daughter, and husband do a hike in Glacier. They were really friendly and we enjoyed their company. The large group that overran the food prep area last night looked extremely put out that we had taken over the area. The best moment was when the older man said very disparaging, I don’t think those kids will be up very early, they only hiked six miles yesterday and got to camp early. We were all thinking the same thing and did not say anything. If anyone has stock in REI, you must have seen a good increase after these folks bought all of their new gear. We really try not to be hiking snobs, but sometimes people make it hard to not judge them.
We took our time enjoying our last morning in camp, but Canada wasn’t going to come to us. It was time to earn my triple crown. We started our last day a little before seven o’clock. It looked to be an easy day of hiking. We had one major pass, Red Gap Pass, to hike over. The weather forecast for the day wasn’t great. It looked like we would have to deal with wind, rain, and cold temperatures. It seemed like a fitting end to the CDT. 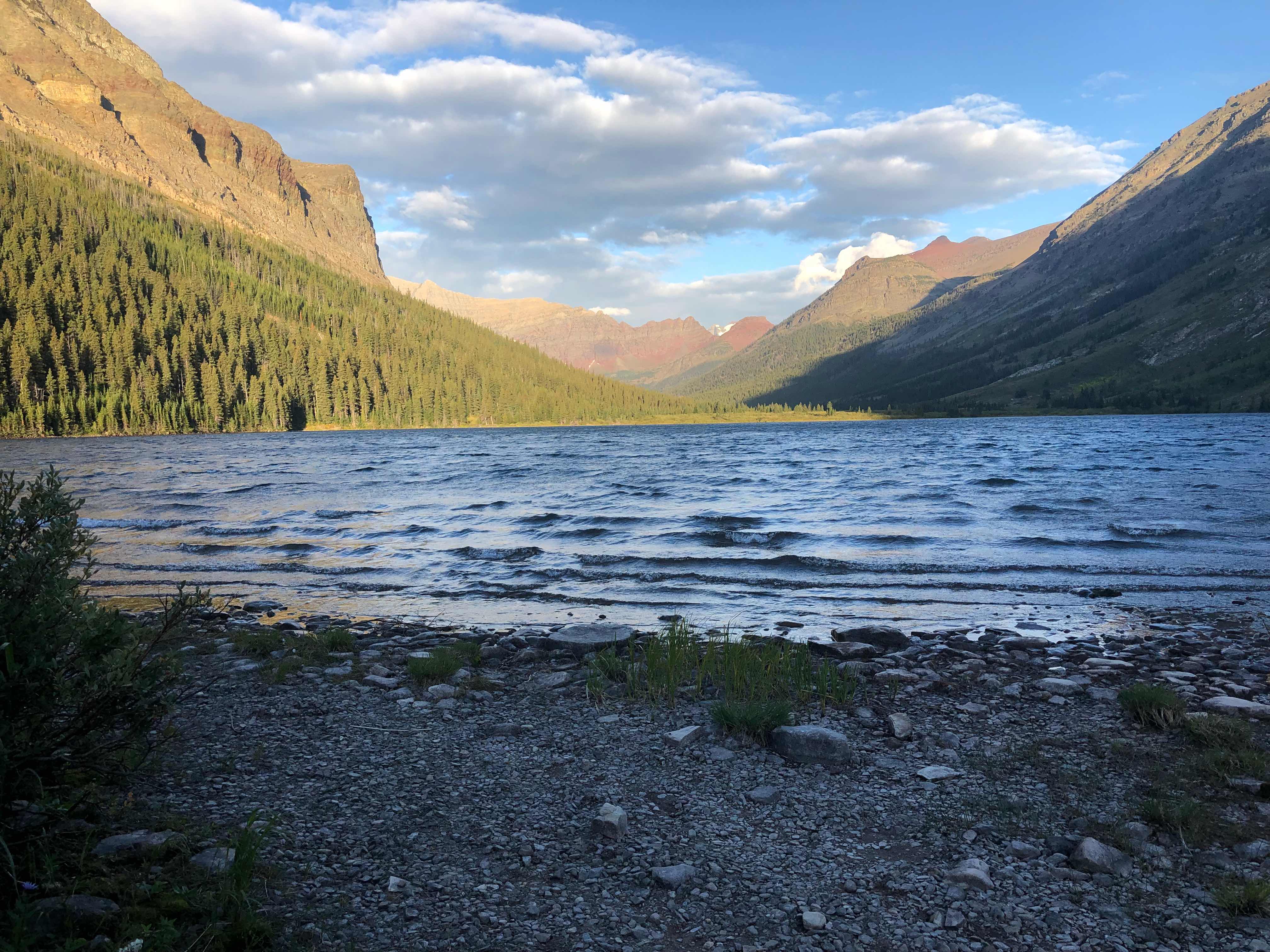 Poia Lake
The first couple of miles were super easy. We followed the edge of the lake for awhile, before following a creek. Eventually the nice flat trail turned into a climb. I could see Red Gap Pass in the distance and I was more than excited to get up and over before the weather rolled in. The clouds were beginning to look ominous. The farther we hiked the more you could feel each other’s excitement. It was just bubbling under the surface. 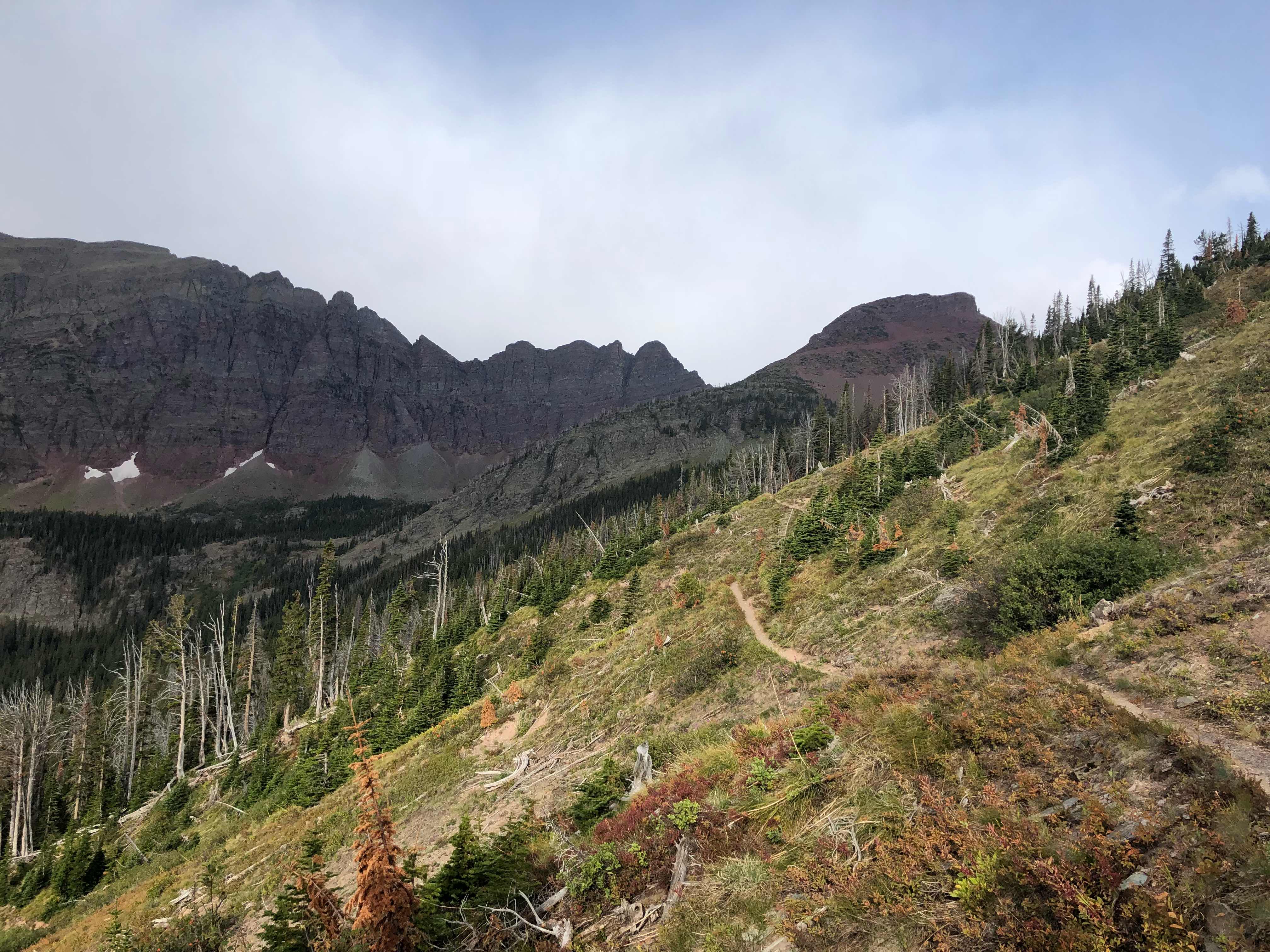 On the way up to the Pass
The only place where the wind was truly atrocious was at the top of the pass. It had also started to drizzle/snow. I could barely keep my footing as the wind pushed me all around. Z and I waited at the top of the pass for Straws, and Piñata. It was a good thing we didn’t have to wait very long. I was absolutely freezing. 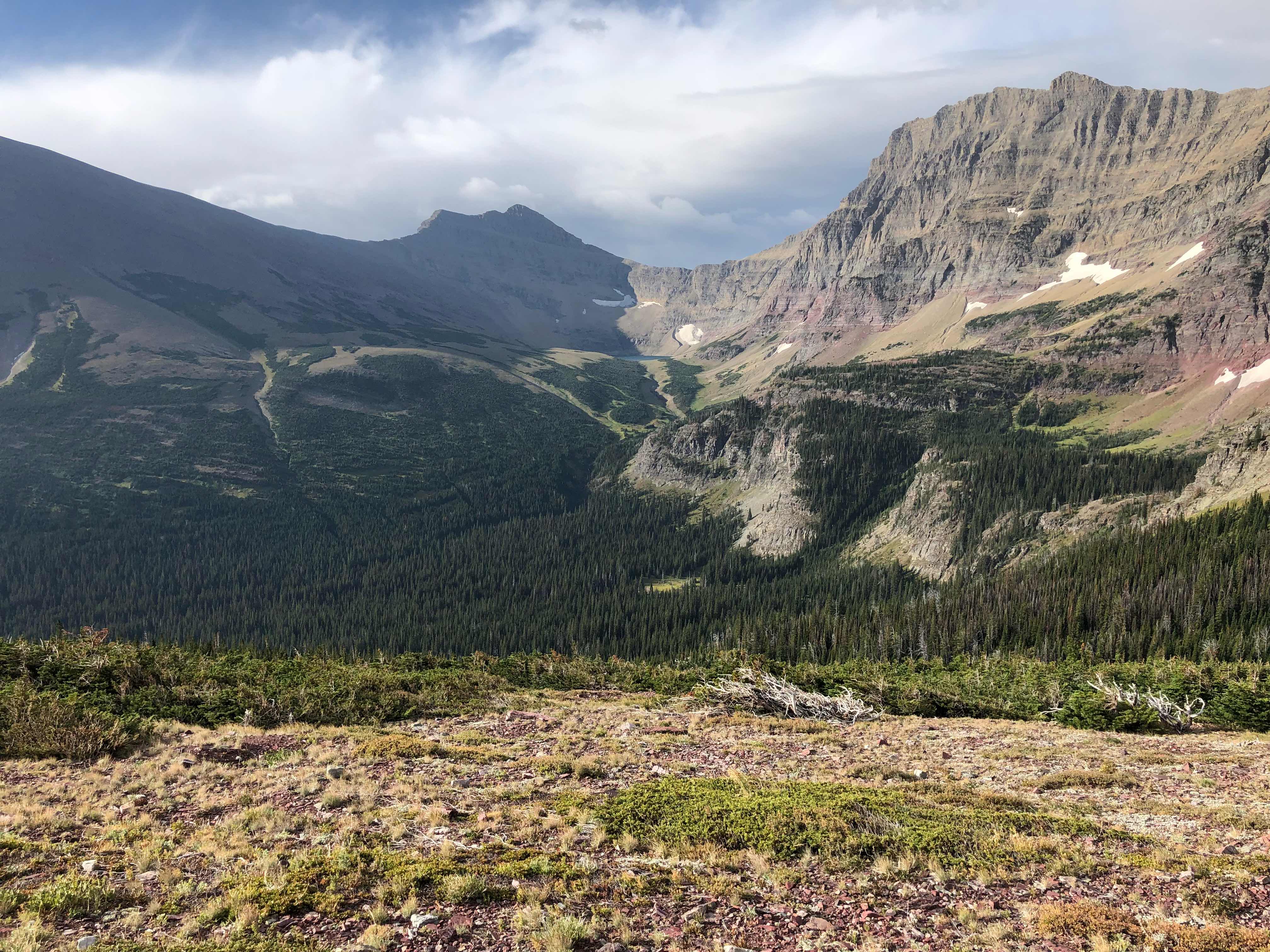 Panoramic views on the climb up to Red Gap 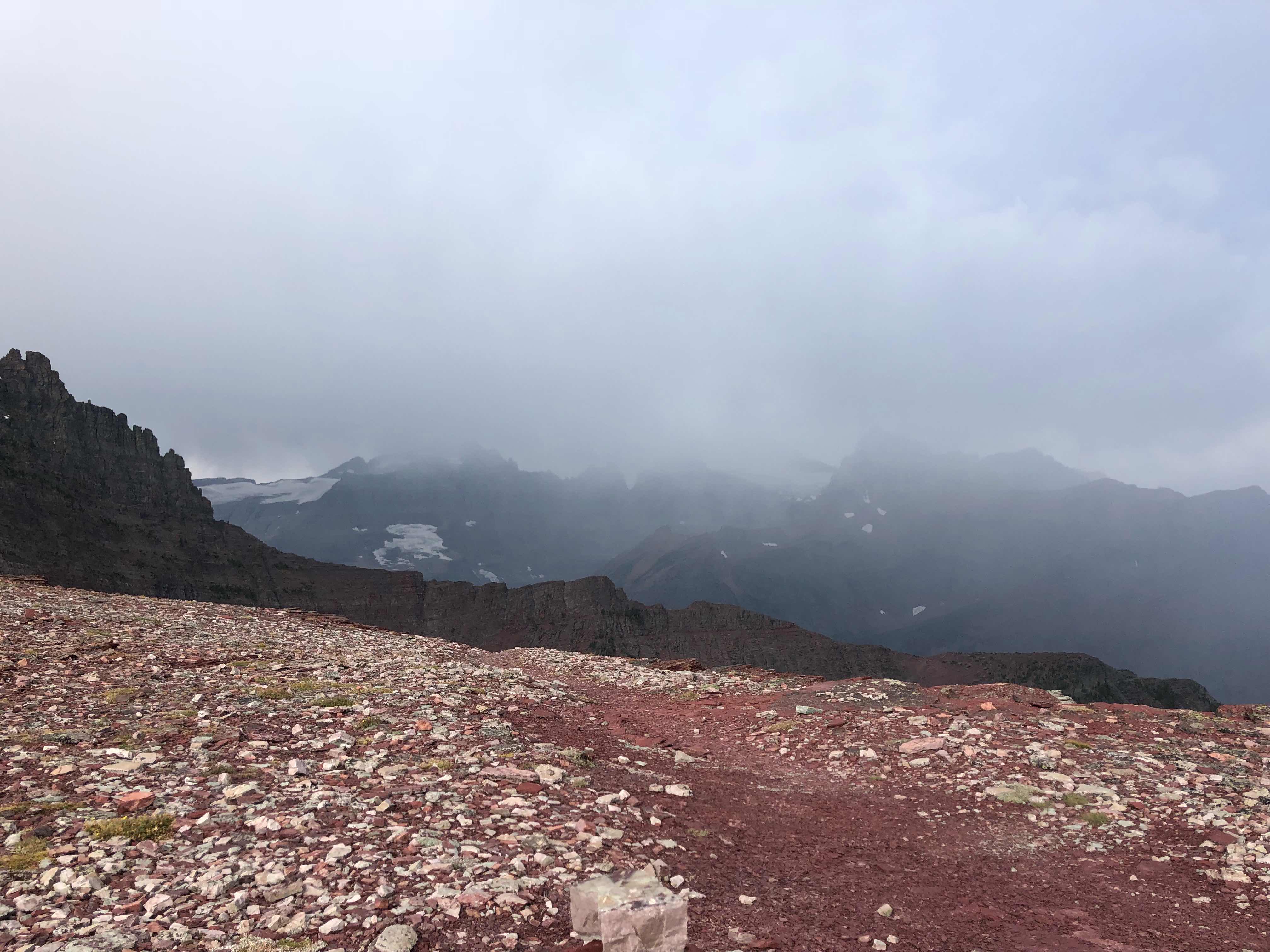 Weather at the top 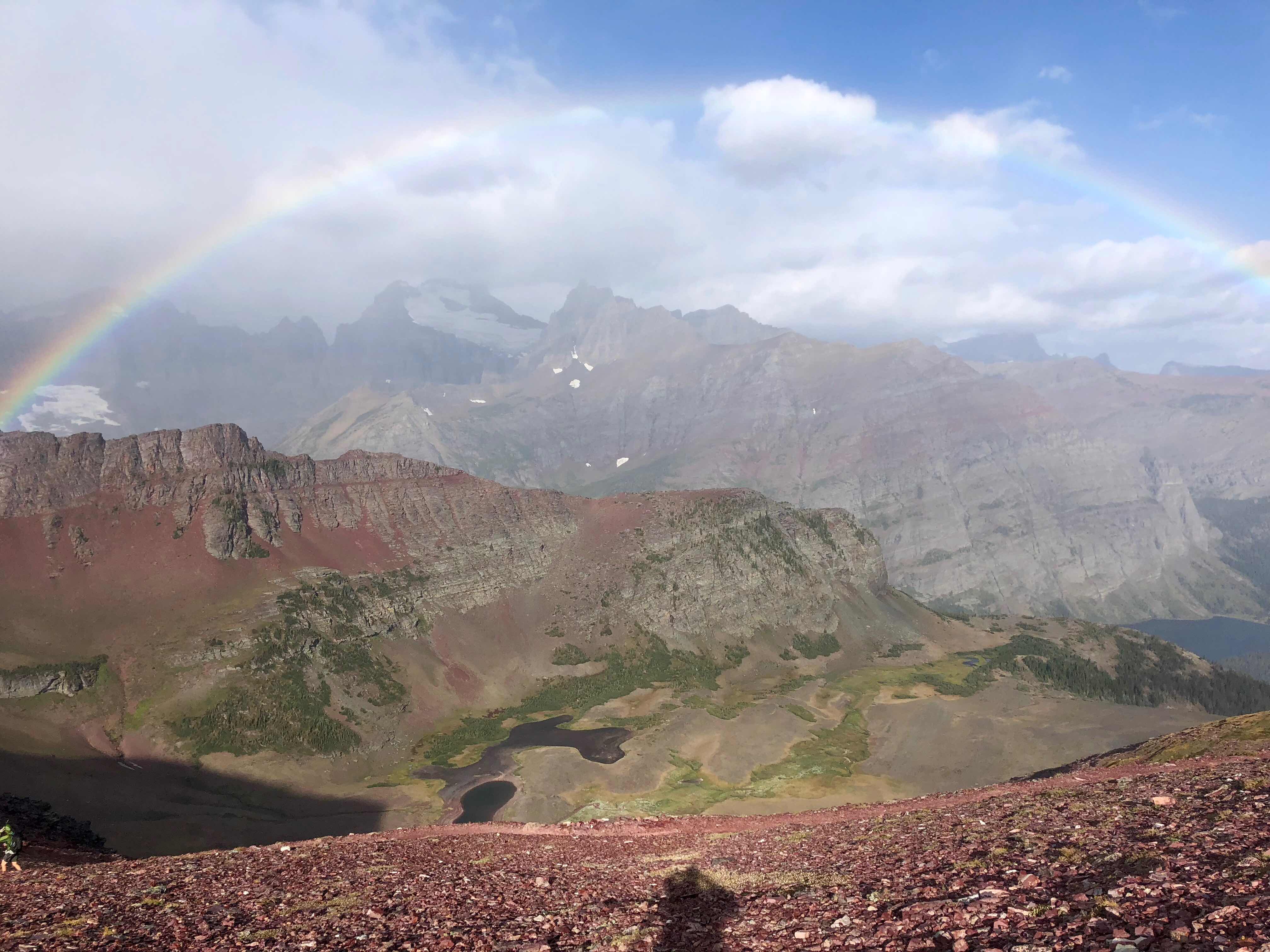 Rainbow!
The less than ideal weather at the top of the pass was totally ok with me. It wasn’t very pleasant to hike and stand in, but the sweet rainbow was perfect. You can’t have a rainbow without a little rain. 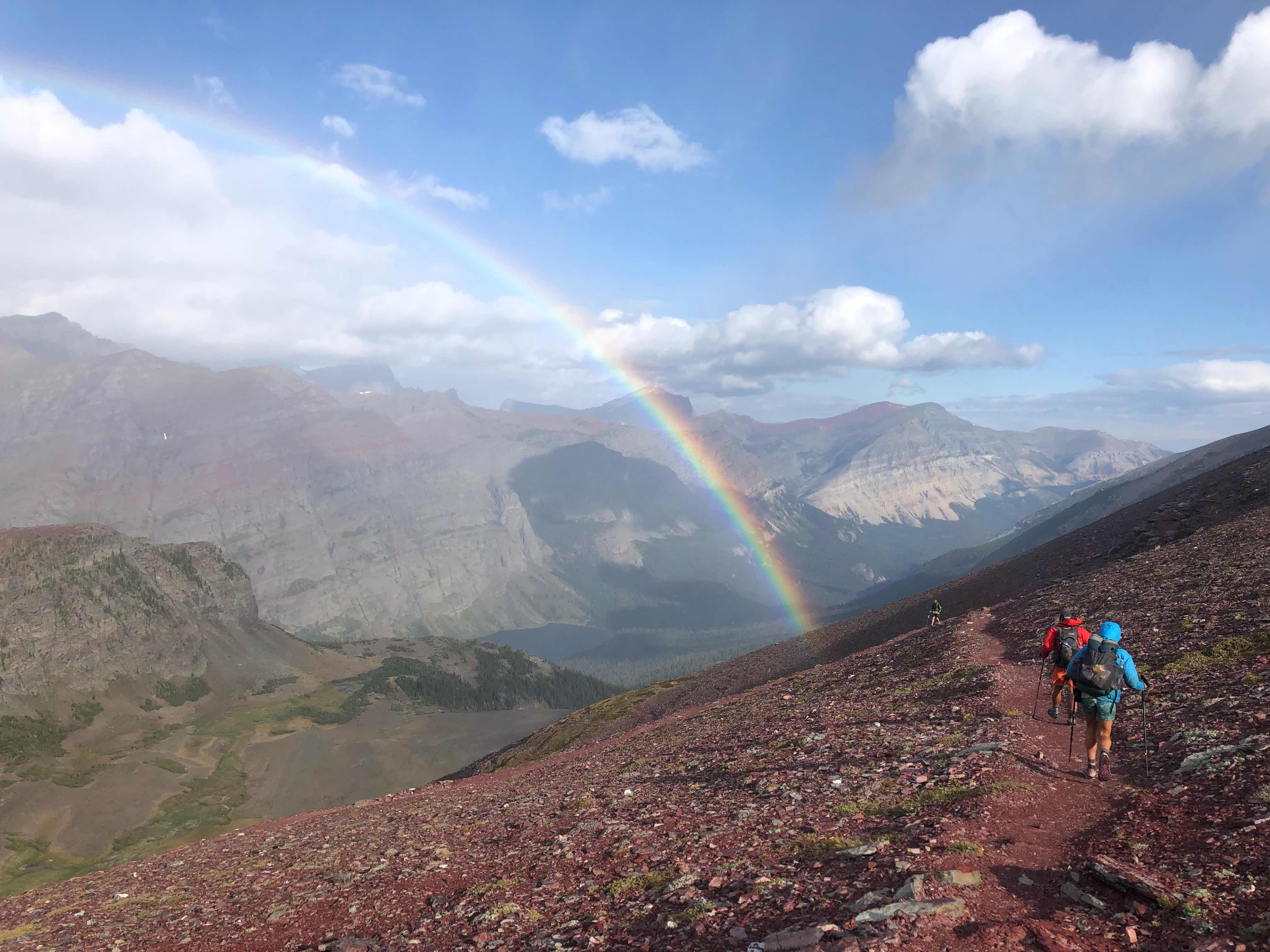 So vivid
The hike down the pass was very interesting. The small amount of drizzly rain had turned into a tiny hailstorm. I took a projectile directly to my eye. The wind came close to blowing me off the mountain several times, but I was still smiling ear to ear. 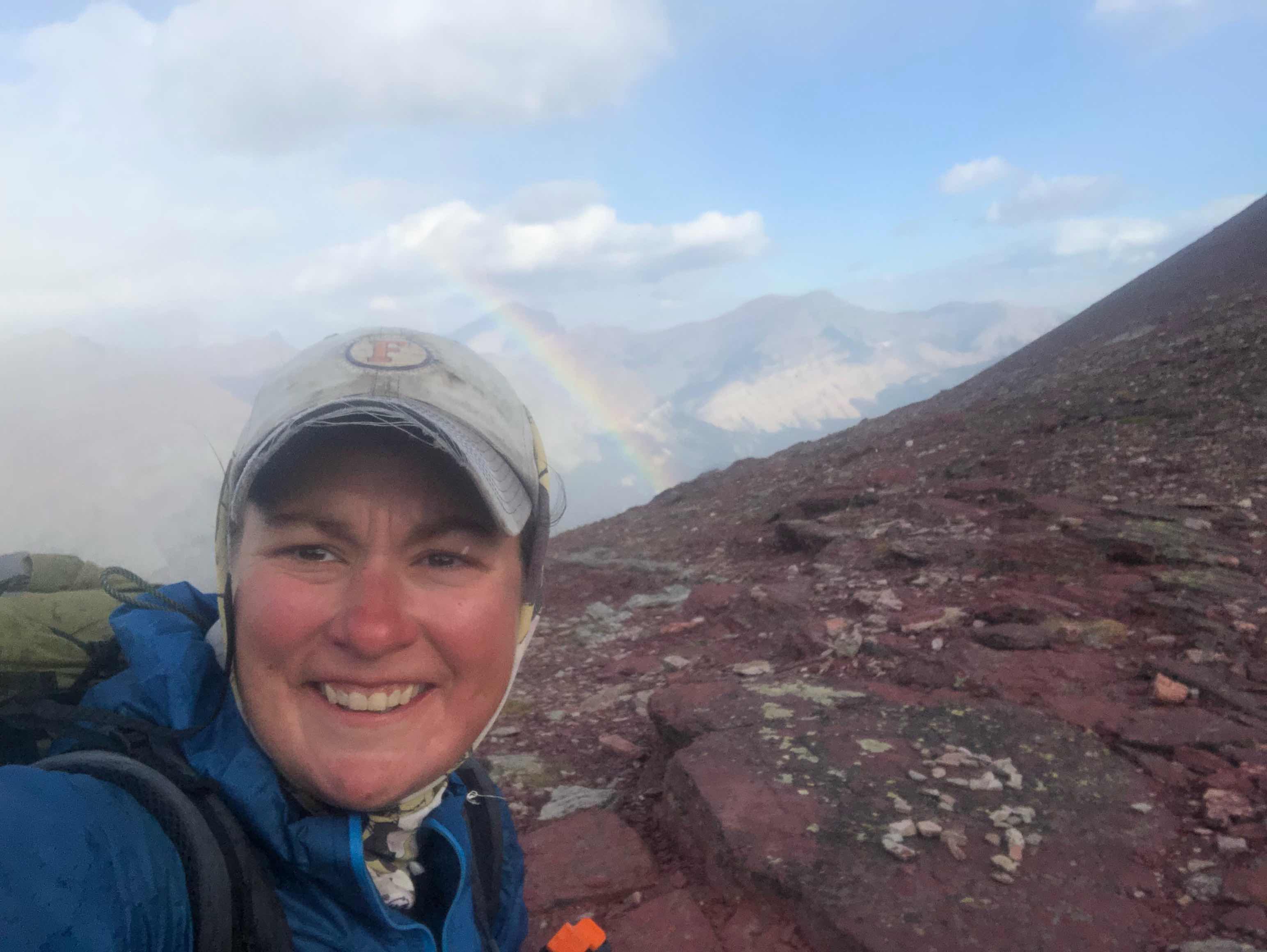 Shit eating grin
We made it about three quarters of the way down from the pass before we stopped for a break. We snuggled in amongst a groove of trees. I ate close to one thousand calories in a minute and a half. It was really cold and I regretted my meager breakfast. The calories helped to warm me up and the energy boost was very much appreciated. 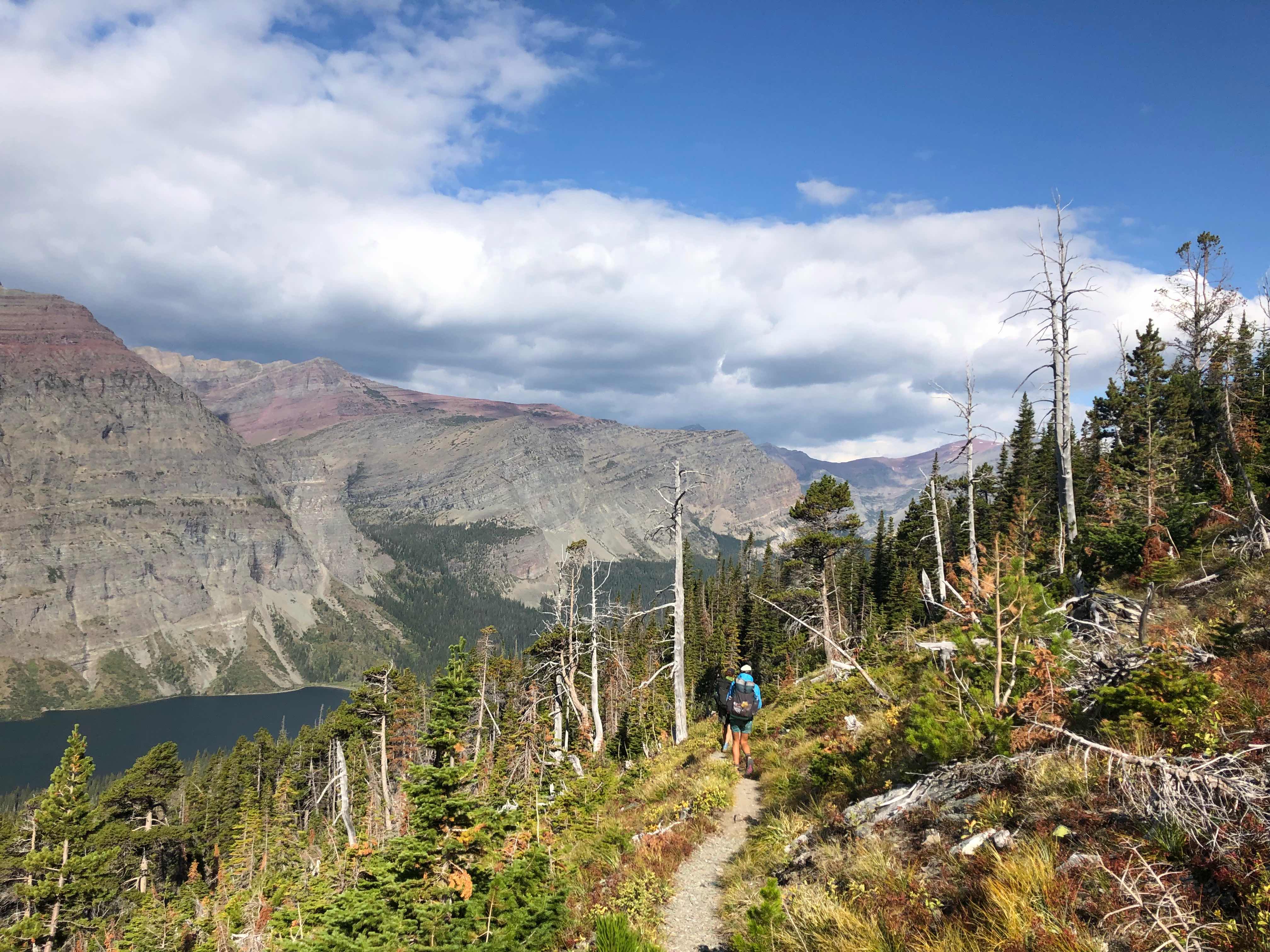 Almost to tree line
Once we got back into the trees the wind didn’t seem as bad. We walked along the shore of Elisabeth Lake, which I took to be a good omen since that is my middle name. Shortly after passing the lake we ran into a ranger. He was really nice, but we really weren’t in a chatting mood. We were in a make miles mood. He asked to see our permits, which we had handy. He also was interested in where Piñata had collected the feathers in his hat. We explained that they were all found along the side of a road in a town(none where actually found in Glacier). He told us to take a few extra minutes to walk off trail to see a cool waterfall. I’m not really sure what possessed us to actually follow his advice, but the waterfall was really cool. 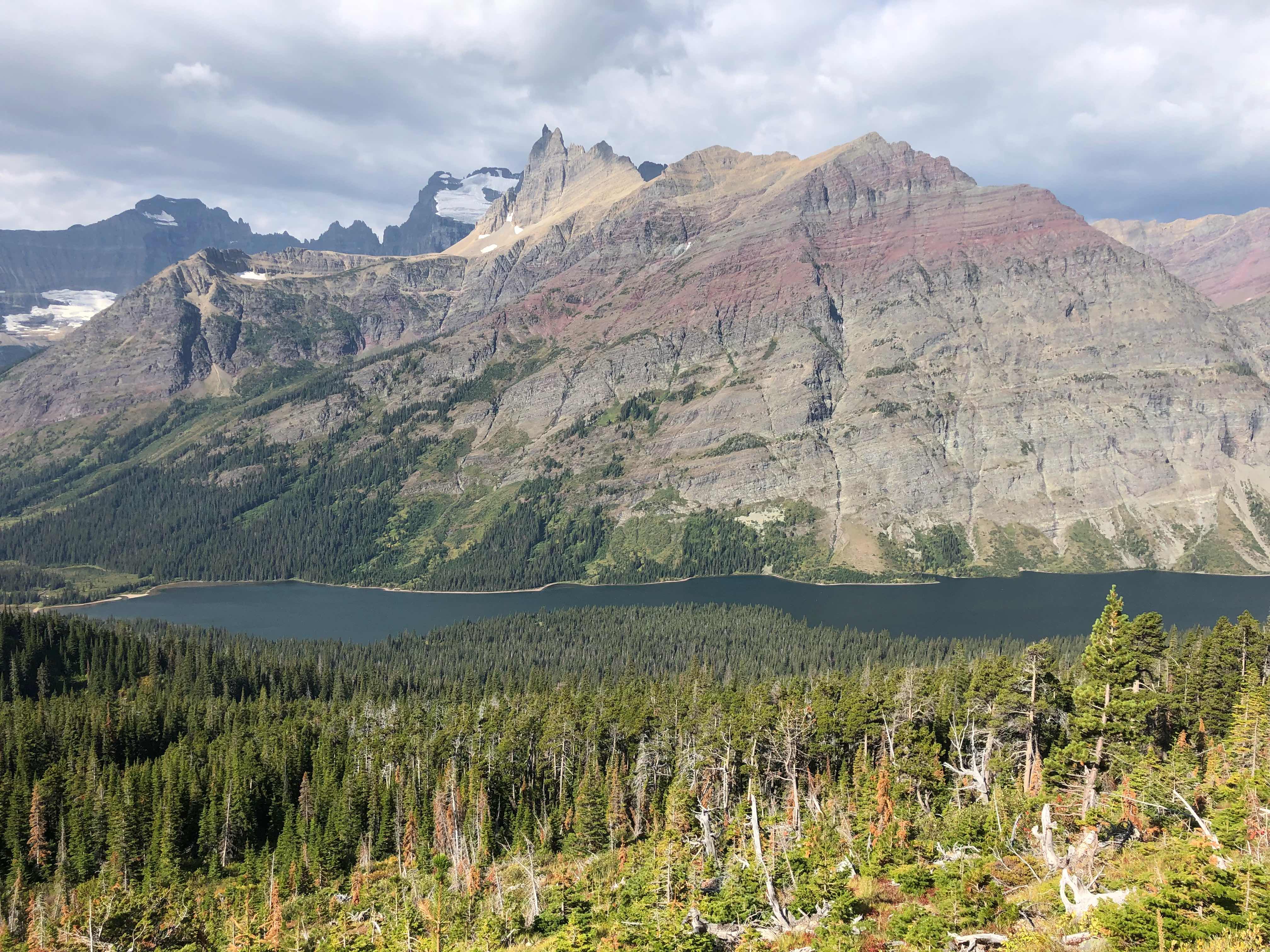 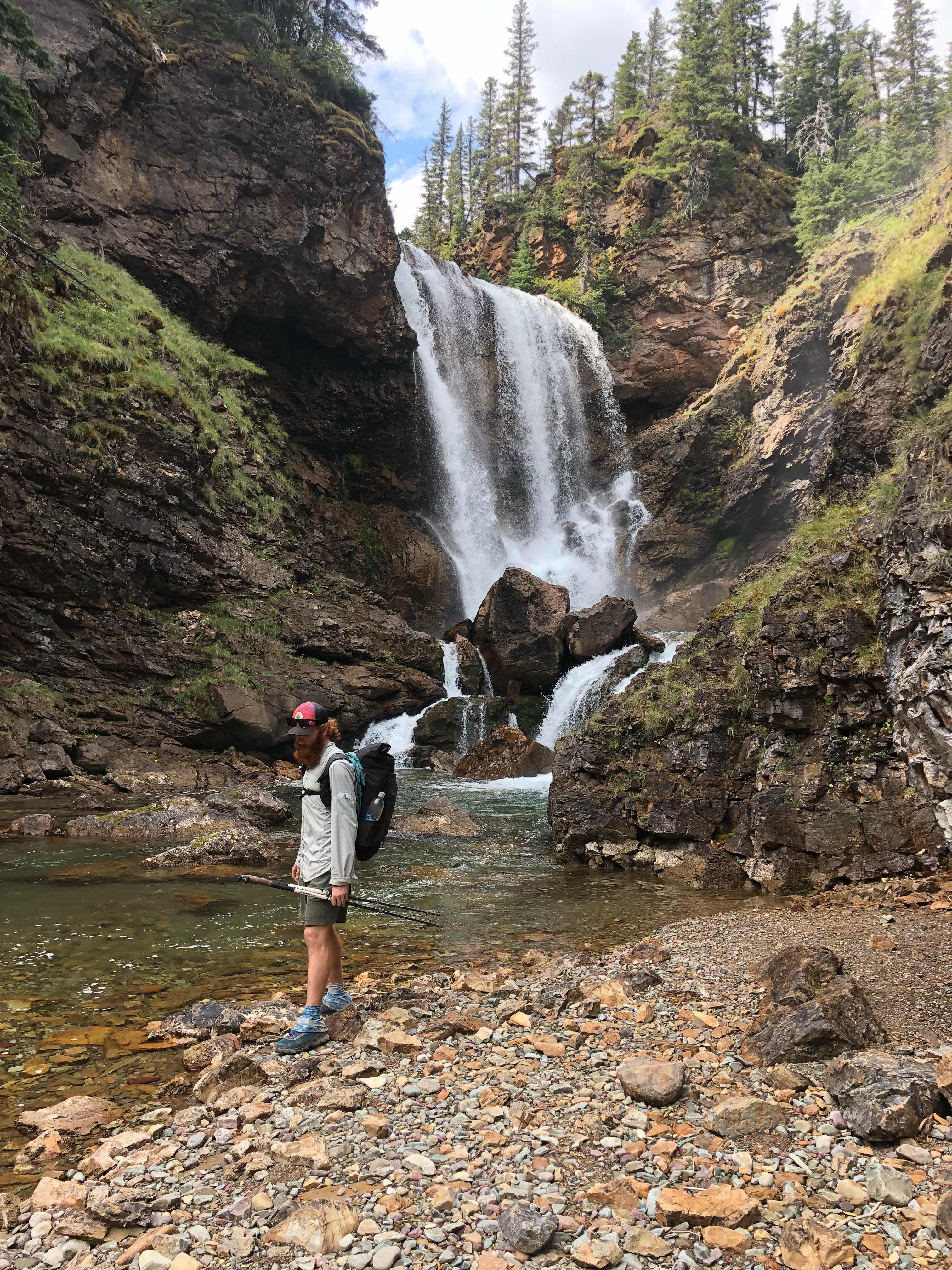 Dawn Mist Falls
We each collected water from the falls before heading out. I didn’t even touch that water for the rest of the hike. Once we passed the falls we were about eight miles away from the border. I could feel the excitement mounting in the group. We crossed over one more sketchy Indiana Jones style bridge and took our last break of the day. 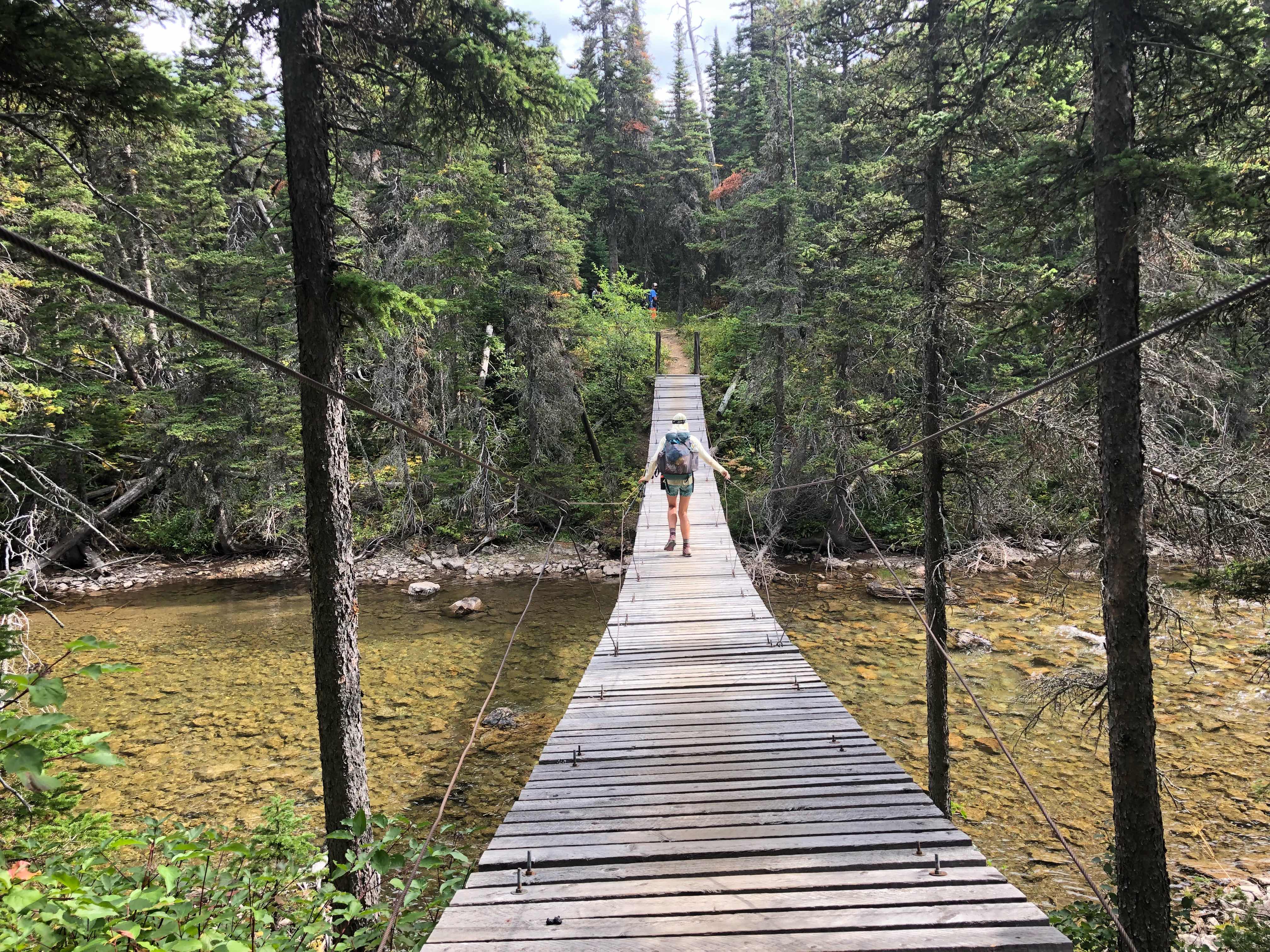 Indiana Jones and the Temple of Doom style bridge
The rest of the way to the border/parking lot/monument is kind of a blur. I’m not exactly sure why, but we ran the remaining 6.5 miles to the end. I strongly suspect that it was because Sour Straws was in the lead. She has these insanely long legs that she uses to outpace everyone. For the most part she restrains herself from destroying us, but not today. I literally stopped to take a picture and when I looked up she was gone. I let Z pass me and then had to run to catch up. They set such a fast pace that I would have to run for a few steps, walk fast, then run again. Eventually the walking fast wasn’t enough and I was just running. The last few miles to the border we hiked in the rain. It wasn’t raining hard enough to soak me, but the temperature was dropping as well. Eventually Z just took off and Straws, Piñata, and I slowed down the pace slightly. Just before hitting the end of the trail we could see a parking lot. That parking lot was the end and we sprinted the last quarter mile. To be honest finishing at a trailhead parking lot was very anticlimactic. 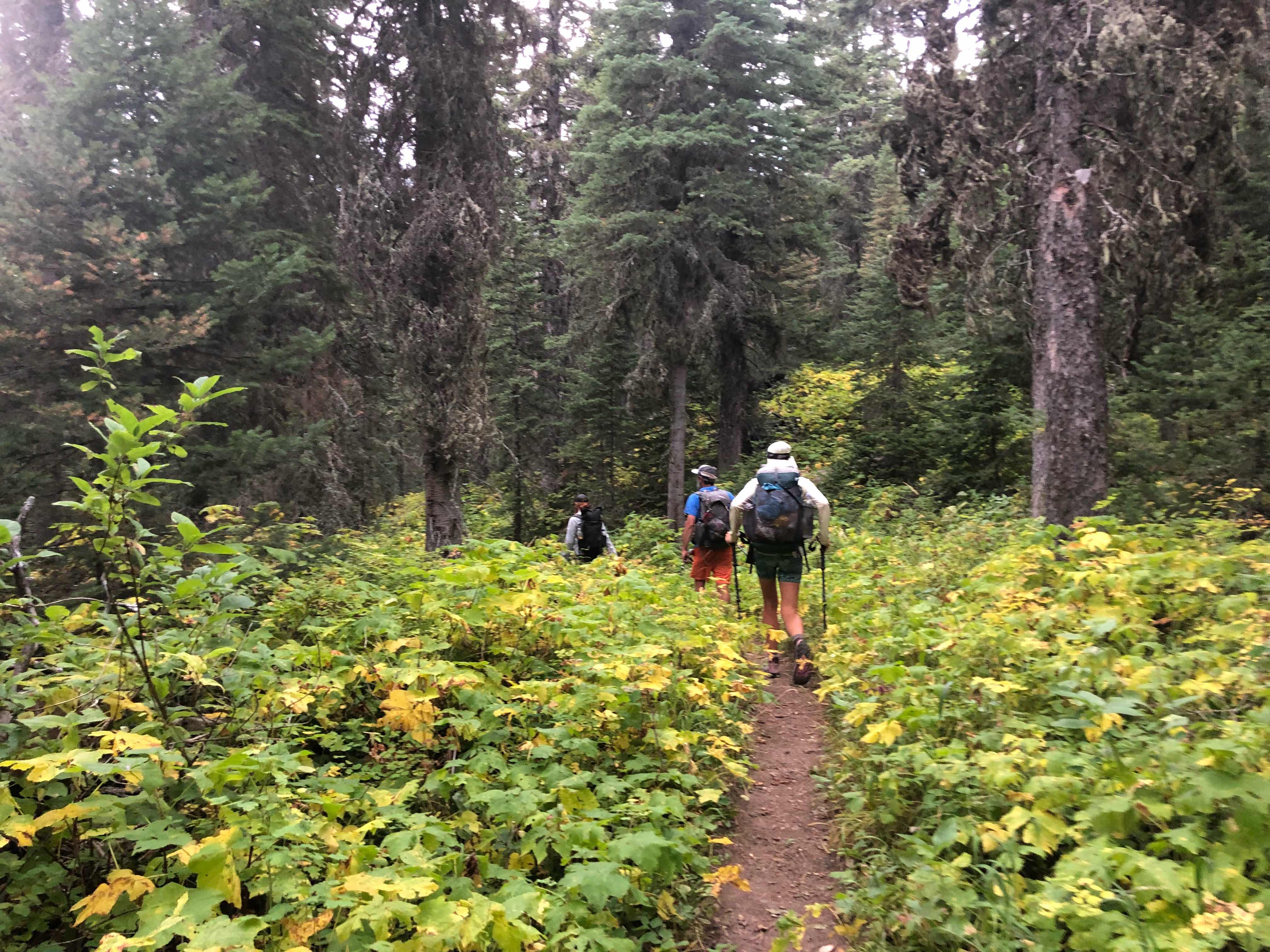 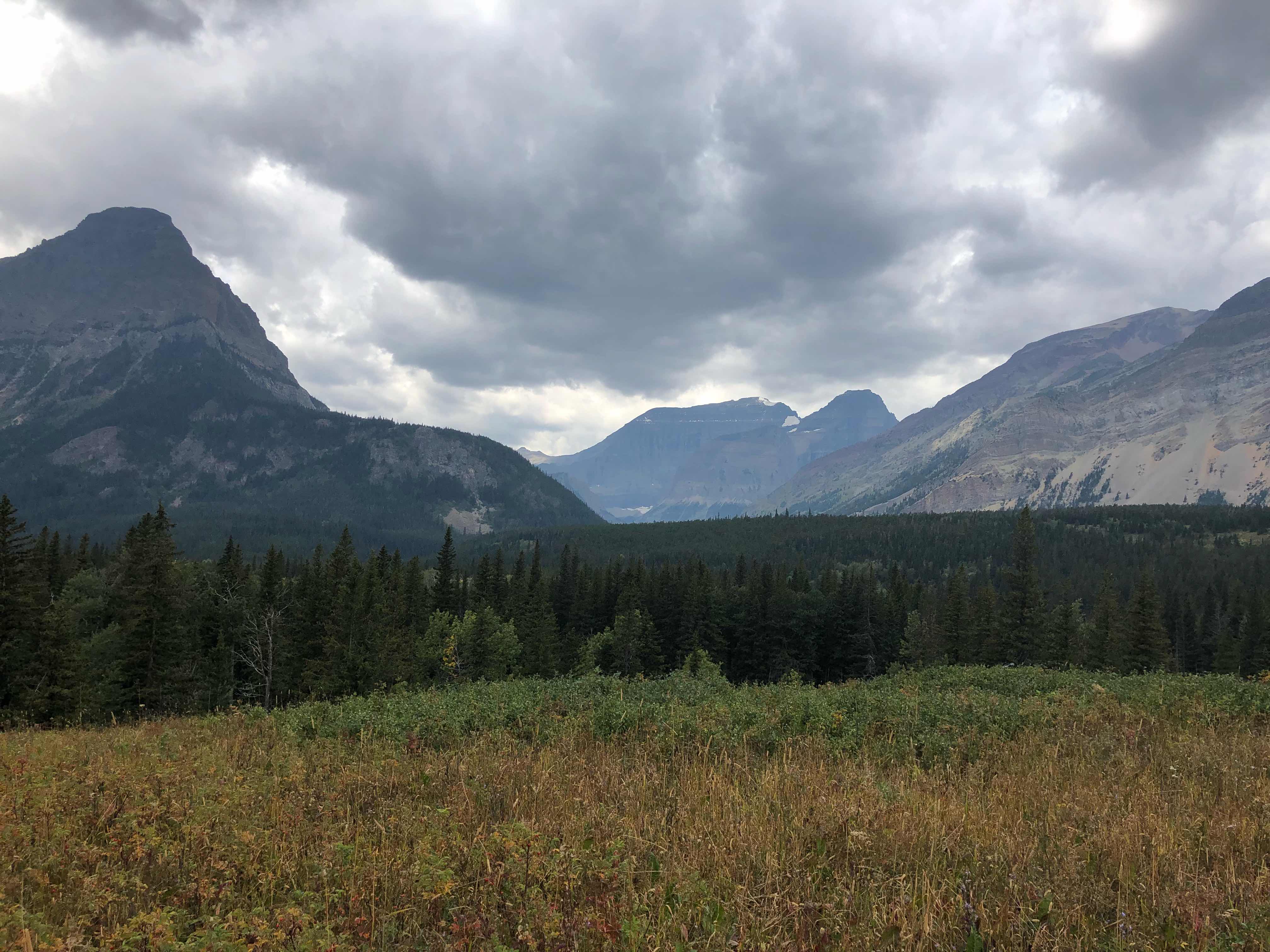 View from the rangers cabin 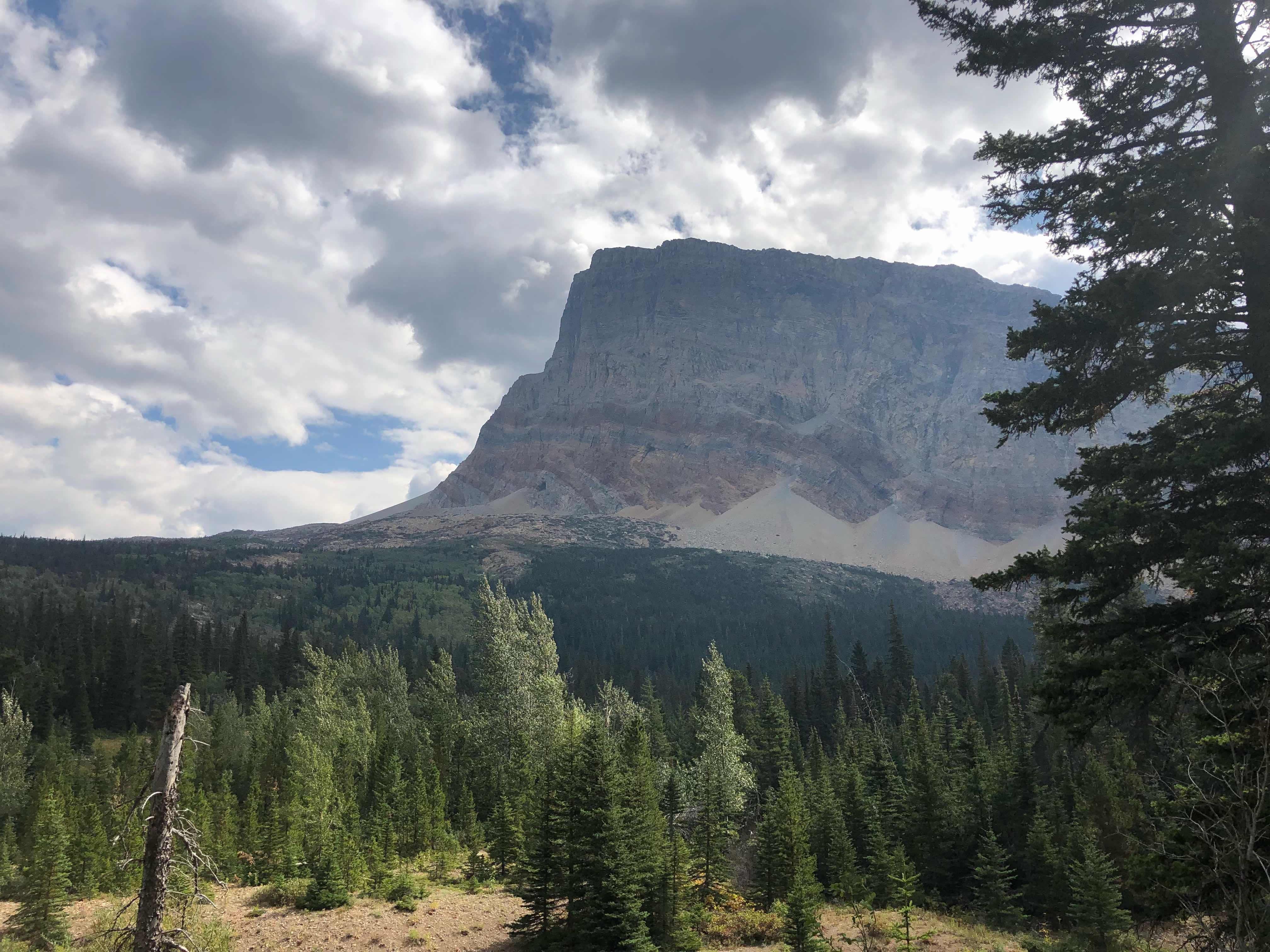 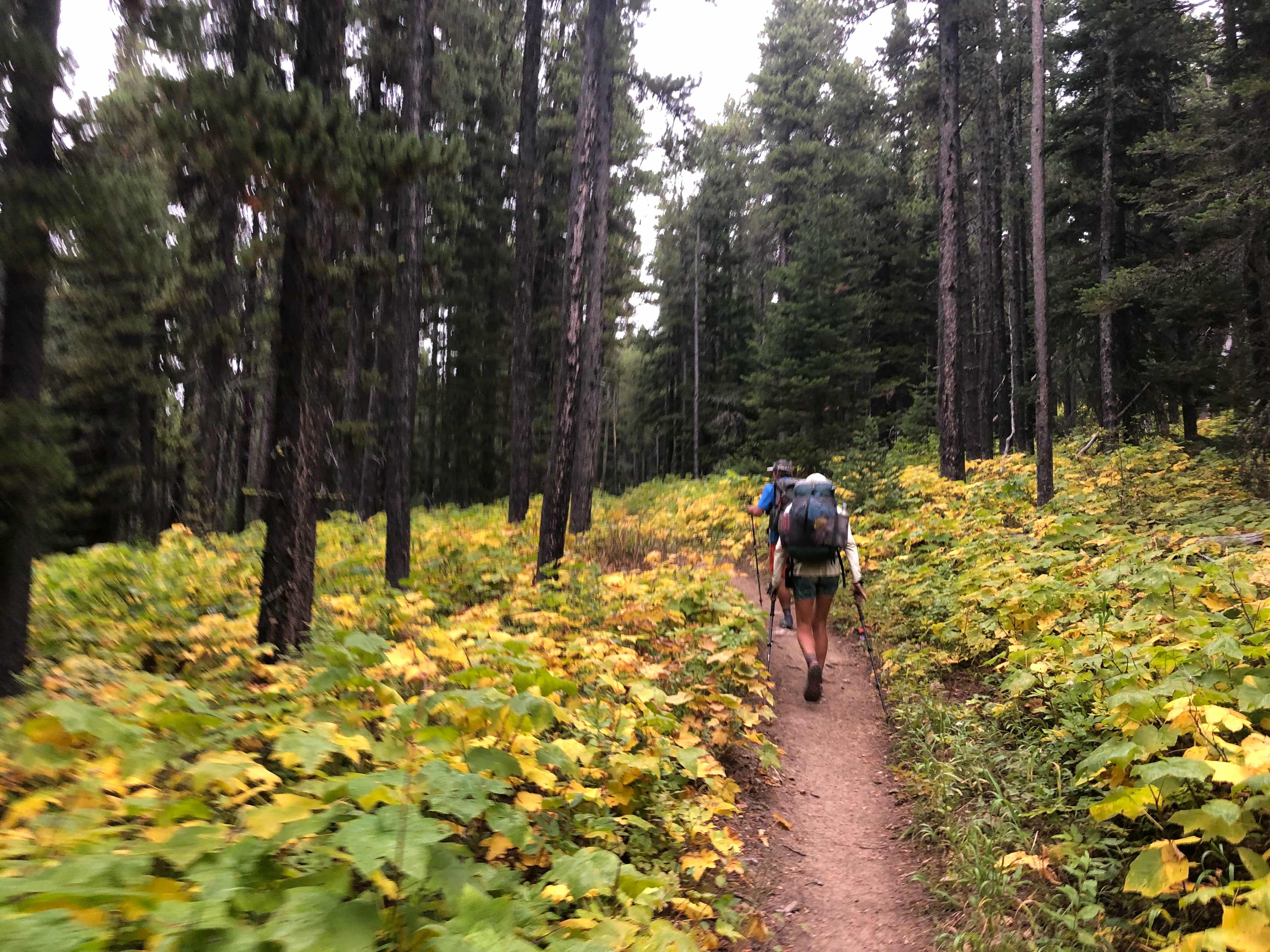 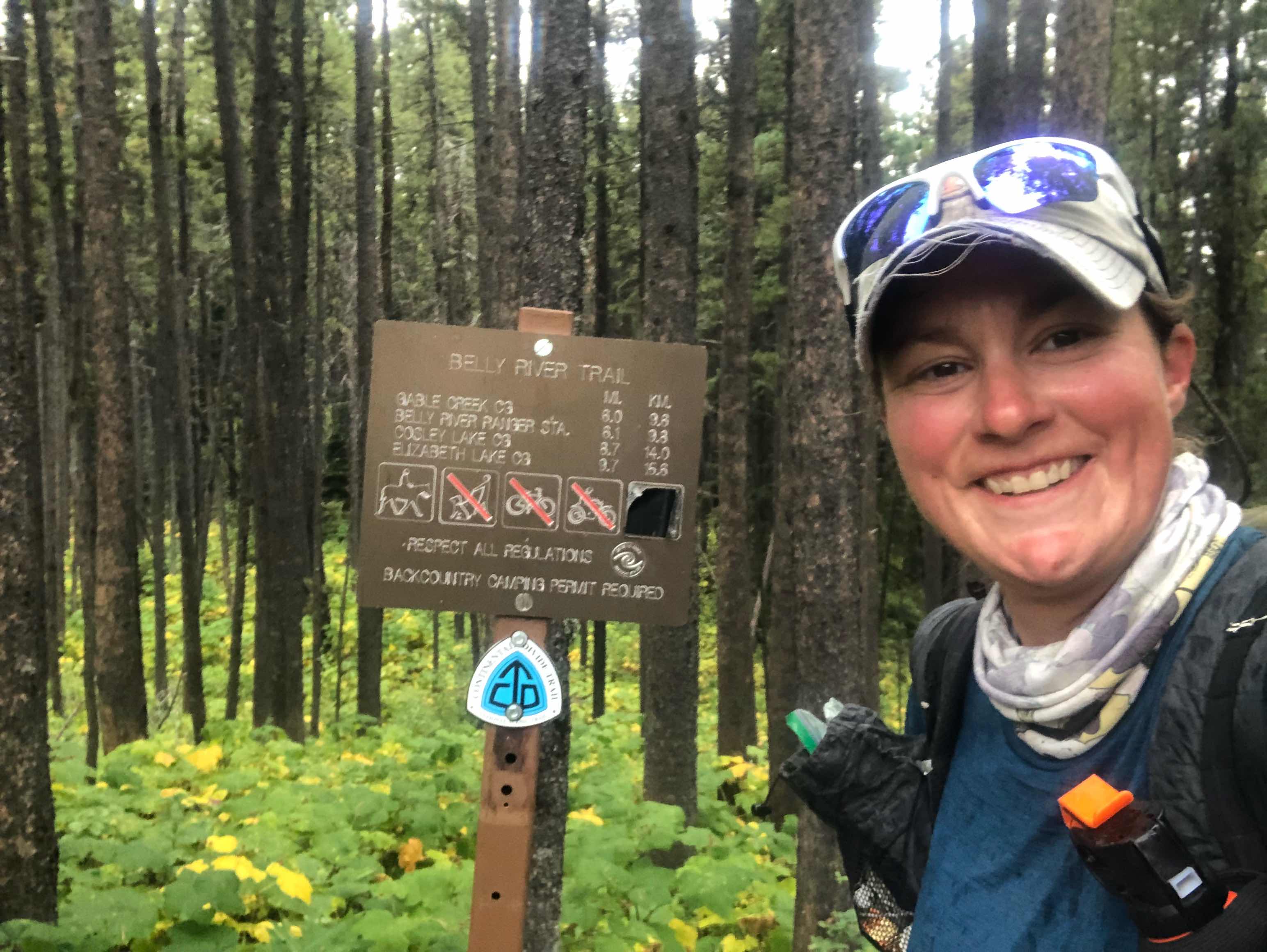 The final blaze and end of the trail
Once we made it to the parking lot we just kind of stood there. I had a million things running through my mind. It didn’t feel like I was done. We walked down the street to the border crossing to take pictures at the monument. It was so cold and the rain had picked up so we didn’t linger. We took a few individual pictures and a group picture as well. 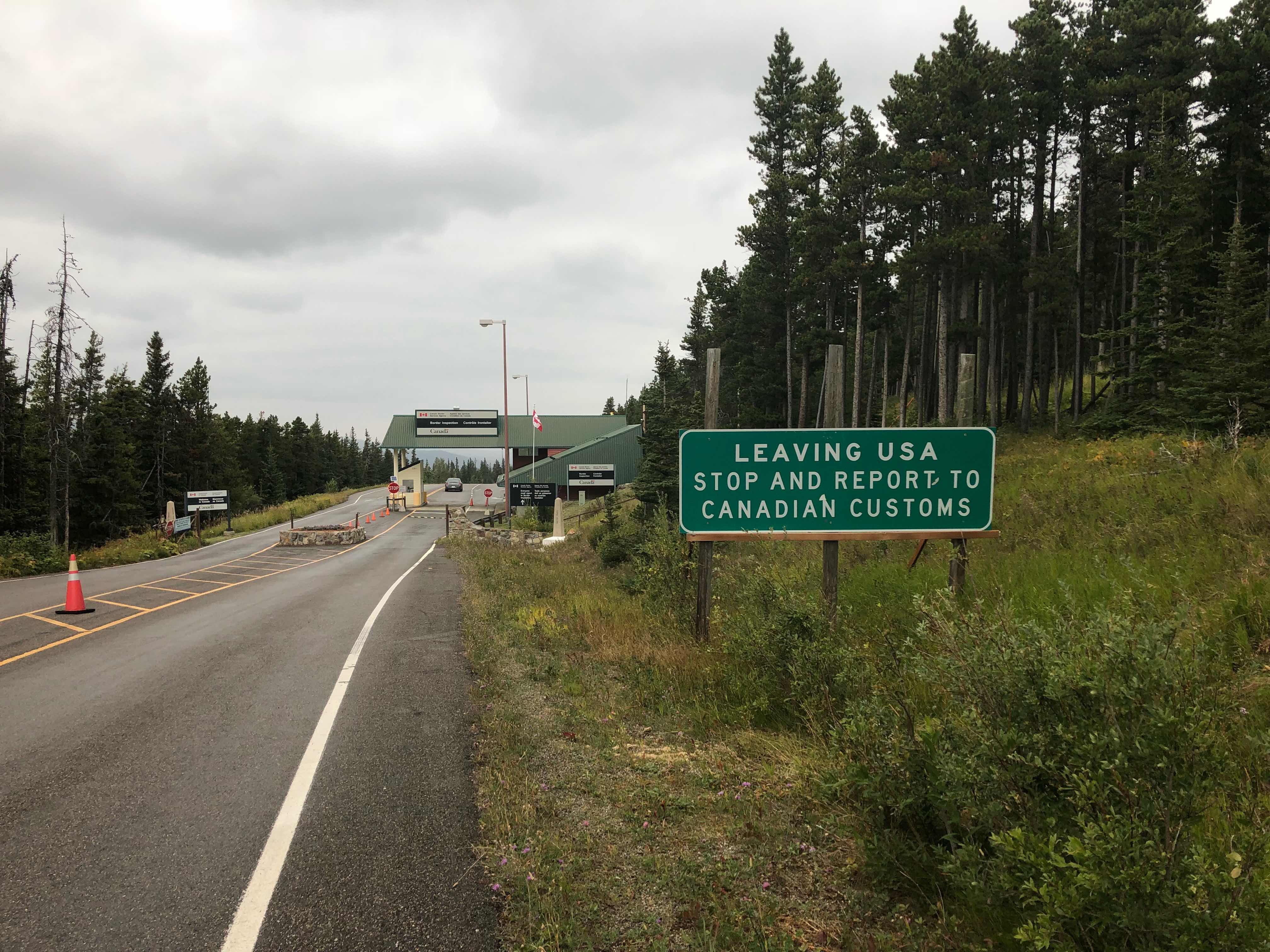 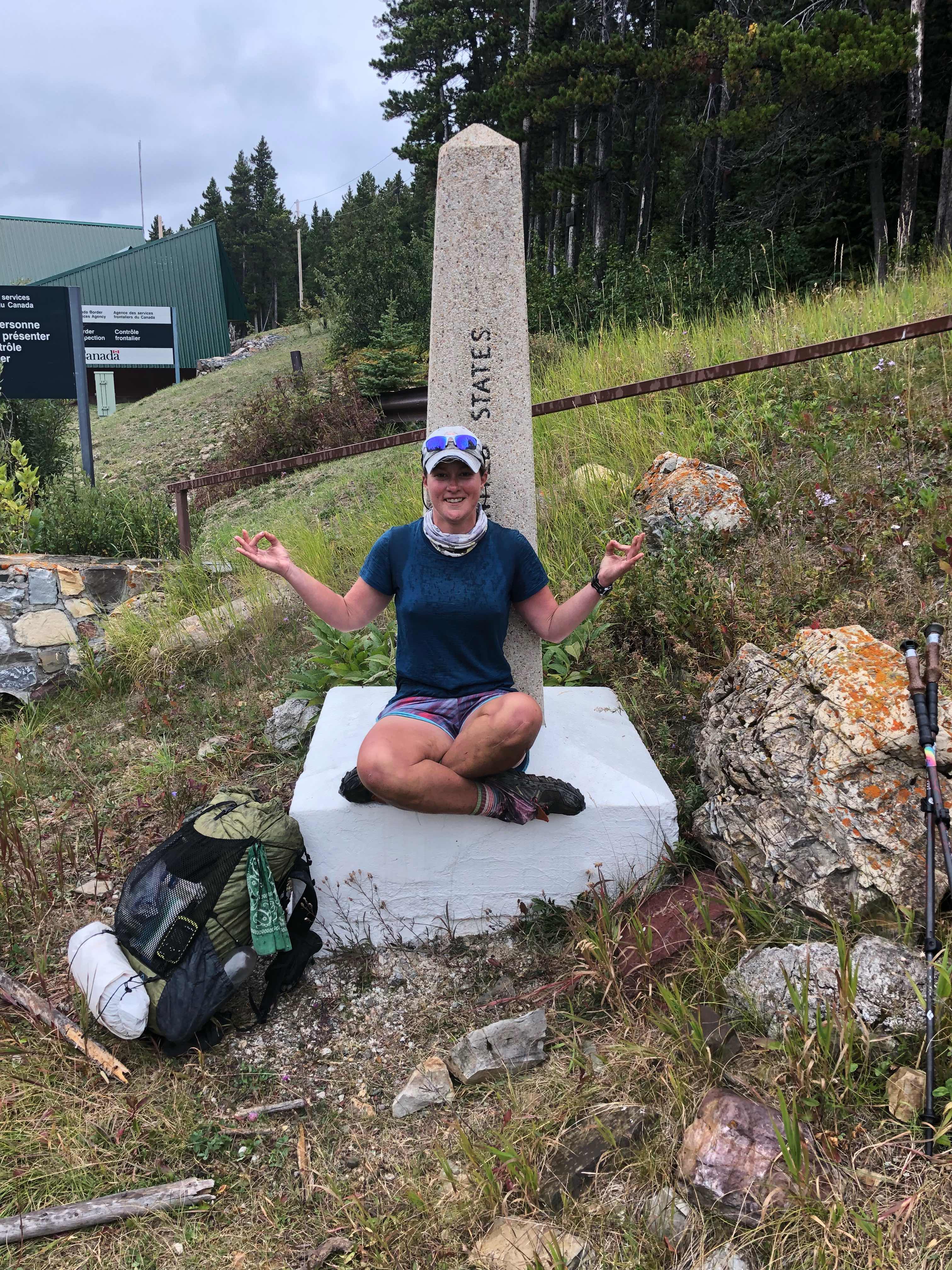 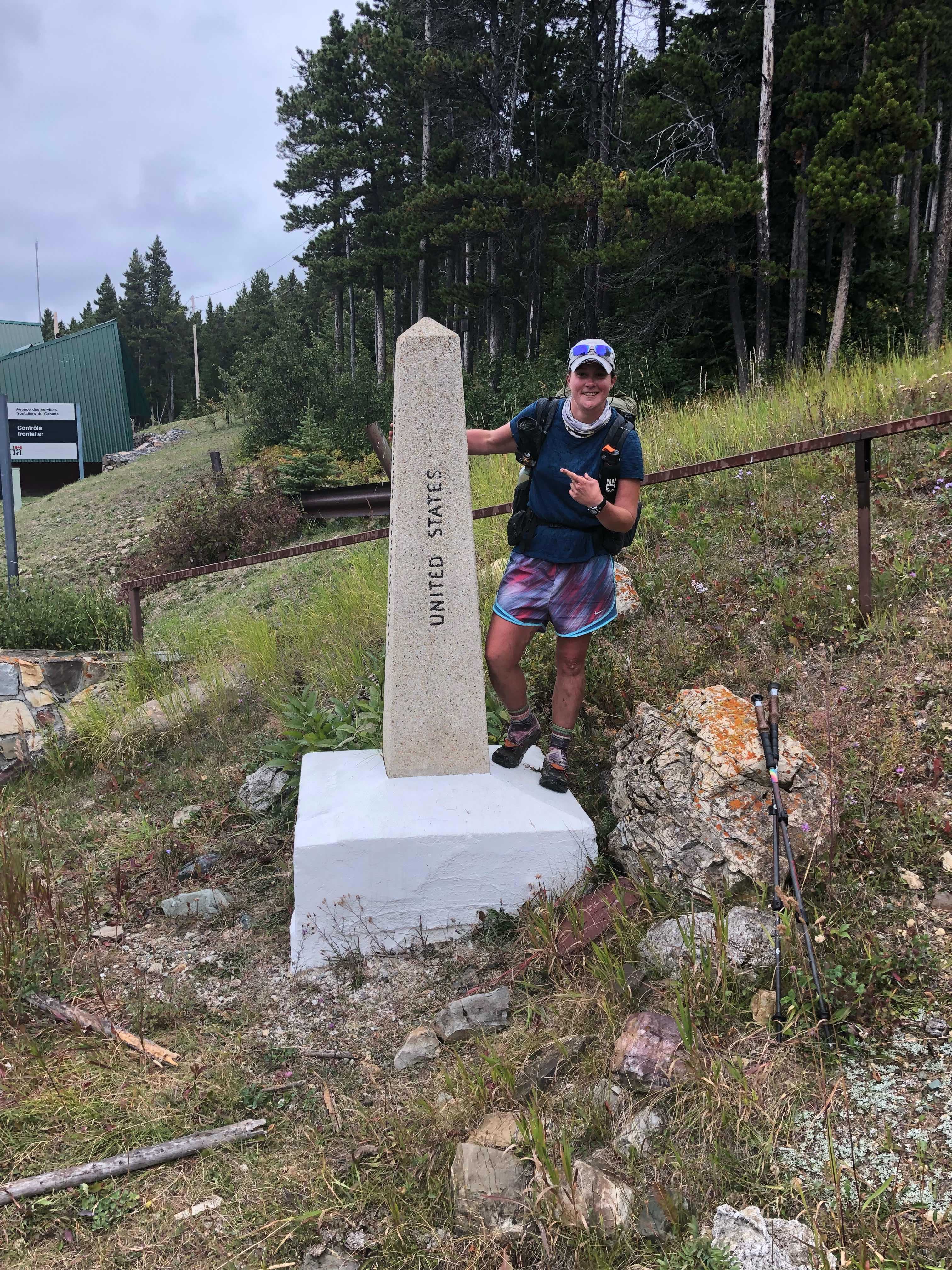 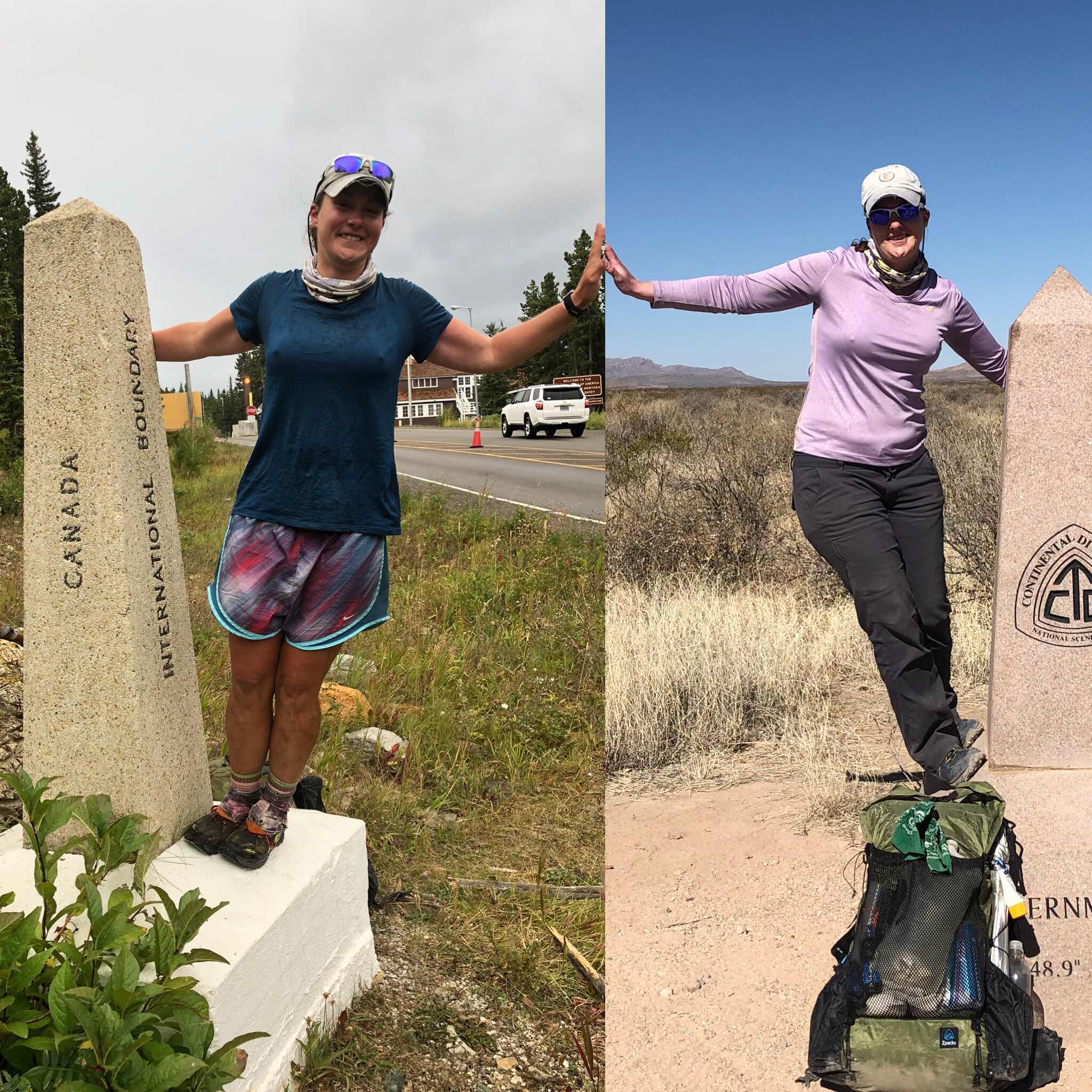 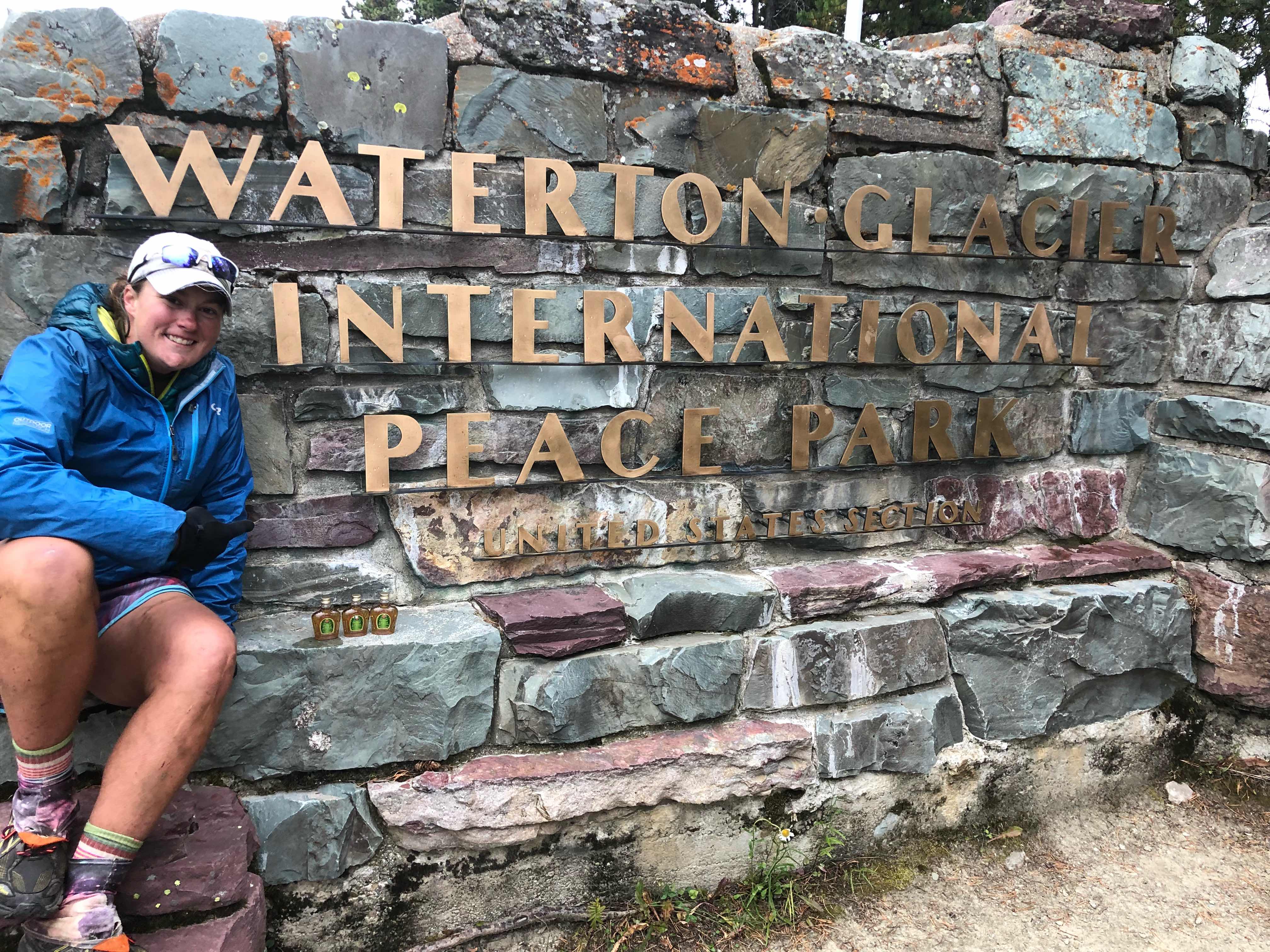 Triple Crown picture. Look closely and you can see my 3 mini bottles of Crown Royal 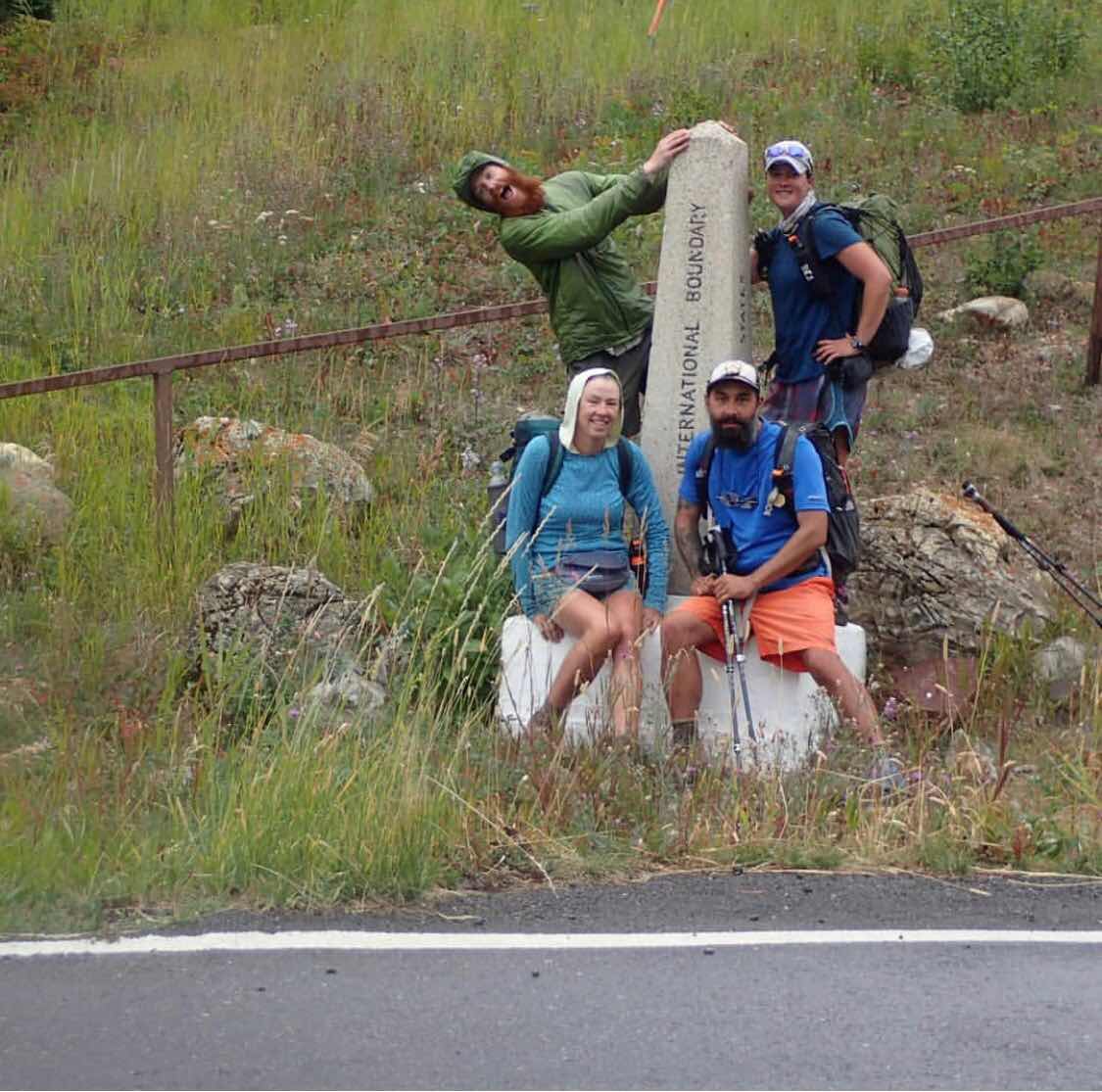 Group shot
We walked back down the trail to enjoy a little scotch, bourbon, and whiskey. We sat and laughed, but there were no tears. I’m not much of a crier and I still have unfinished business in Colorado. I’m sure once I make up my missing miles I’ll feel complete, but right now it doesn’t feel real. We got the worlds easiest hitch back to East Glacier. We barely even walked to the road before the first car driving past stopped to pick us up. It is the first time I’ve ever had the first car stop and pick me up. 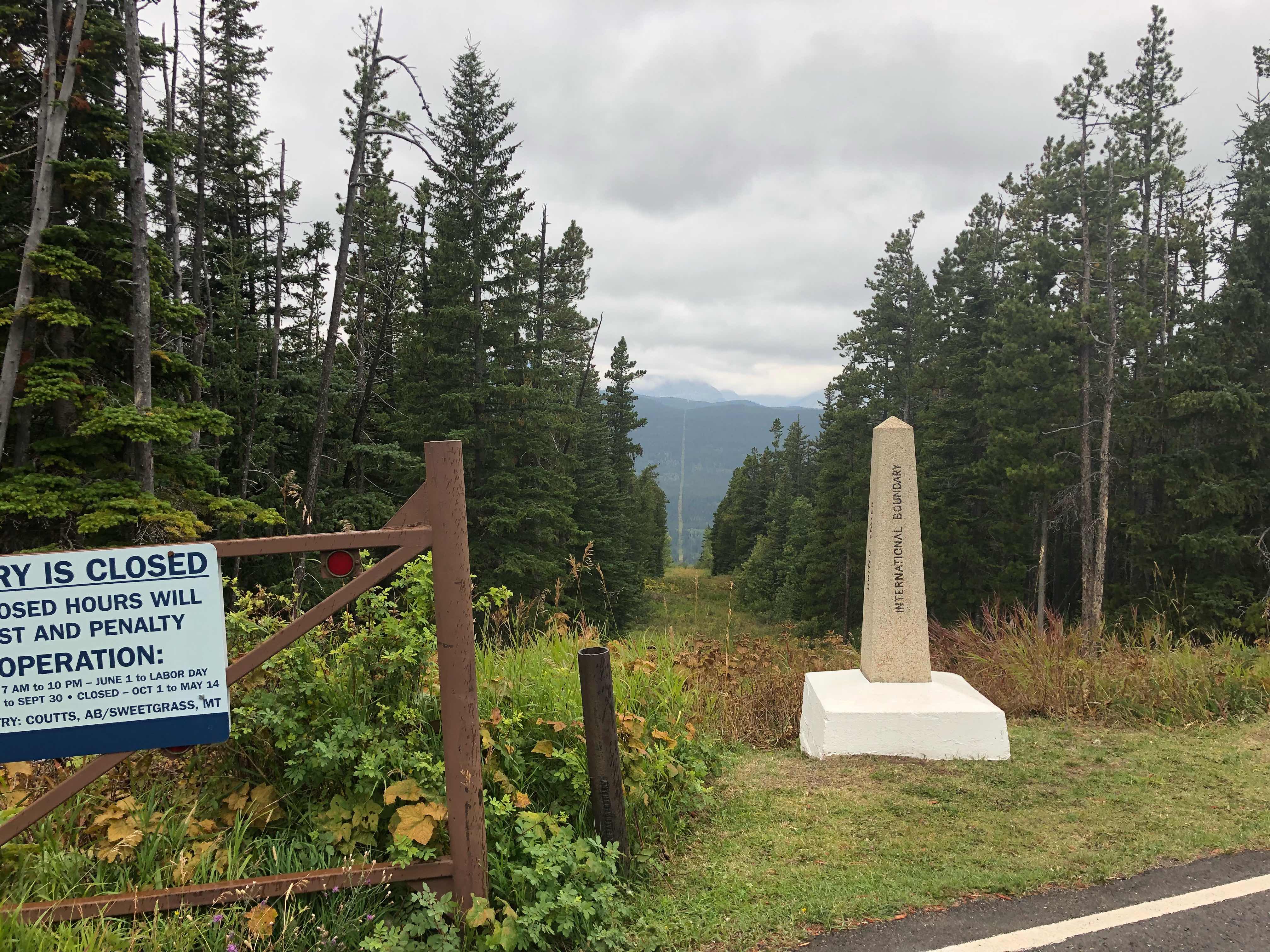 Clear cut marking the border
I’m now back in Colorado and getting ready to connect my missing footsteps. I’ll fill you in on the rest of my final day and traveling to Colorado in my next post. For those of you who participated in my When Will Yoda Finish contest, I finished at 2:20 pm local time on Sept 03.
“Starting something can be easy, it is finishing it that is the highest hurdle.”
- Isabella Poretsis