The last mistake I made yesterday was sleeping inside of the yurt. You would think that I would be smart enough to avoid sleeping inside of a shelter after the time I spent on the AT. I knew better, but was lured into it by the thoughts of staying warm without setting up my tent or sleeping in a ton of layers. The problem with shelters is that you are sleeping within feet of strangers. Everyone’s sleeping bags and pads squeak and crinkle. People get up in the middle of the night to pee and there is always someone who snores. To make things worse someone stepped on my sleeping pad and ripped a seam. Now my pad has a slow leak. Ugh! This pad only has a few hundred miles on it and it was very expensive. I stayed warm, but hardly slept. At 4:30 I decided enough was enough and started to pack up. I was out of the door and on the trail a little after 5 o’clock. By 5:20 it was light enough to see without my headlamp. I was more excited than usual for a town day. It has been a rigorous section and I was ready for a break. 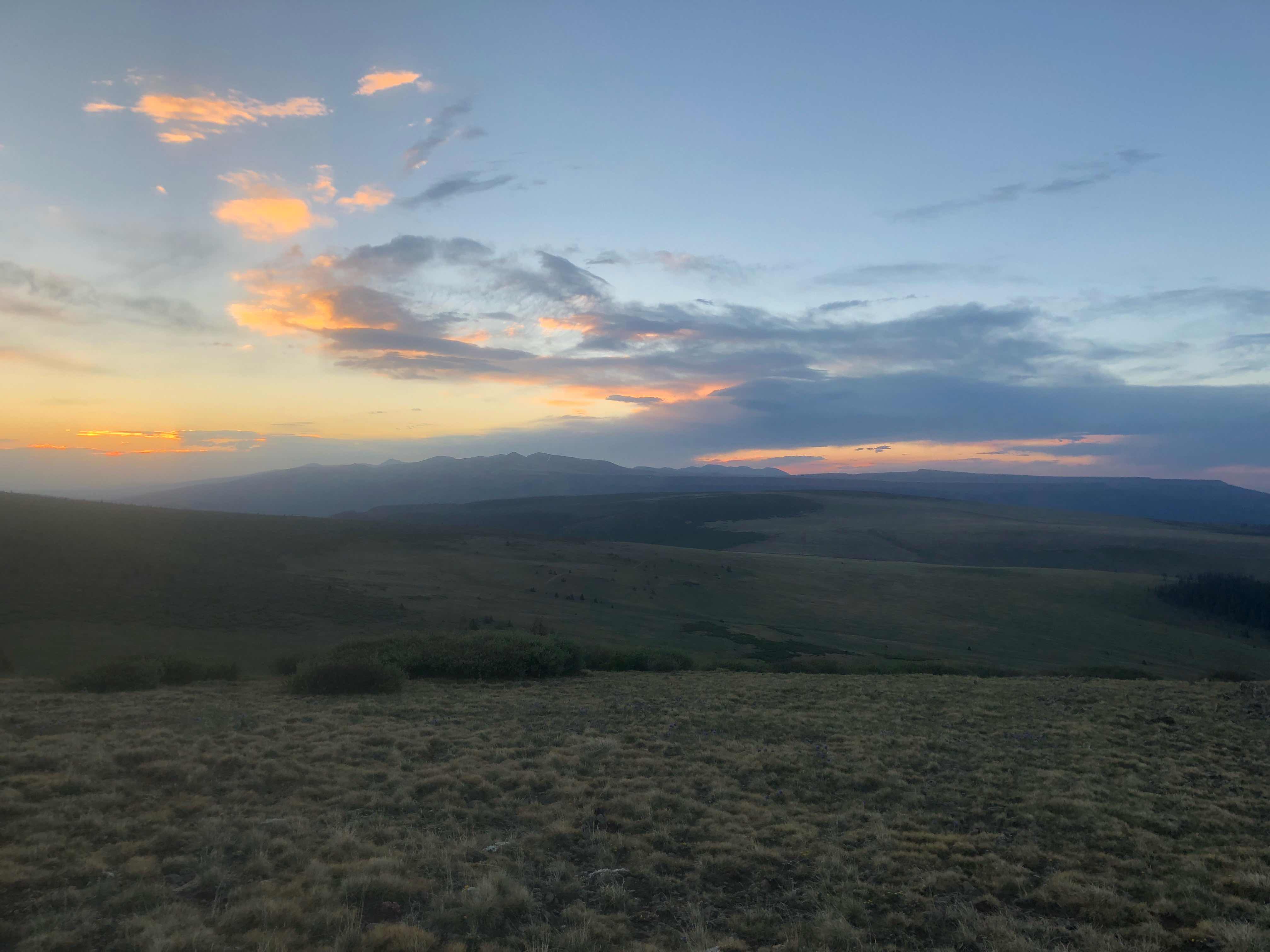 Sunrise
It was an easy hike to the highway and I made it there by eight o’clock. When I arrived I took the time to comb my hair and wash my face. I wanted to look my best for the hitch. This trail has been more difficult and time consuming to hitch into town. To my dismay there was someone already at the road trying to hitch. Custom dictated that I stand off to the side to allow that person to hitch first. I tried to make small talk with him, but he was a foreign hiker from Japan with little English. I understood that he had been waiting for thirty minutes and only three cars had passed. After an hour of waiting I decided enough was enough and I would use the female card to get us a ride. It is common knowledge that it is easier for female hikers to get a ride. As soon as I took charge a truck drove by returning hikers from town. The driver, Gabe, offered us a ride back to town. Gabe was super nice and a pleasure to talk to. Lake City was about seventeen miles away and the time passed quickly. 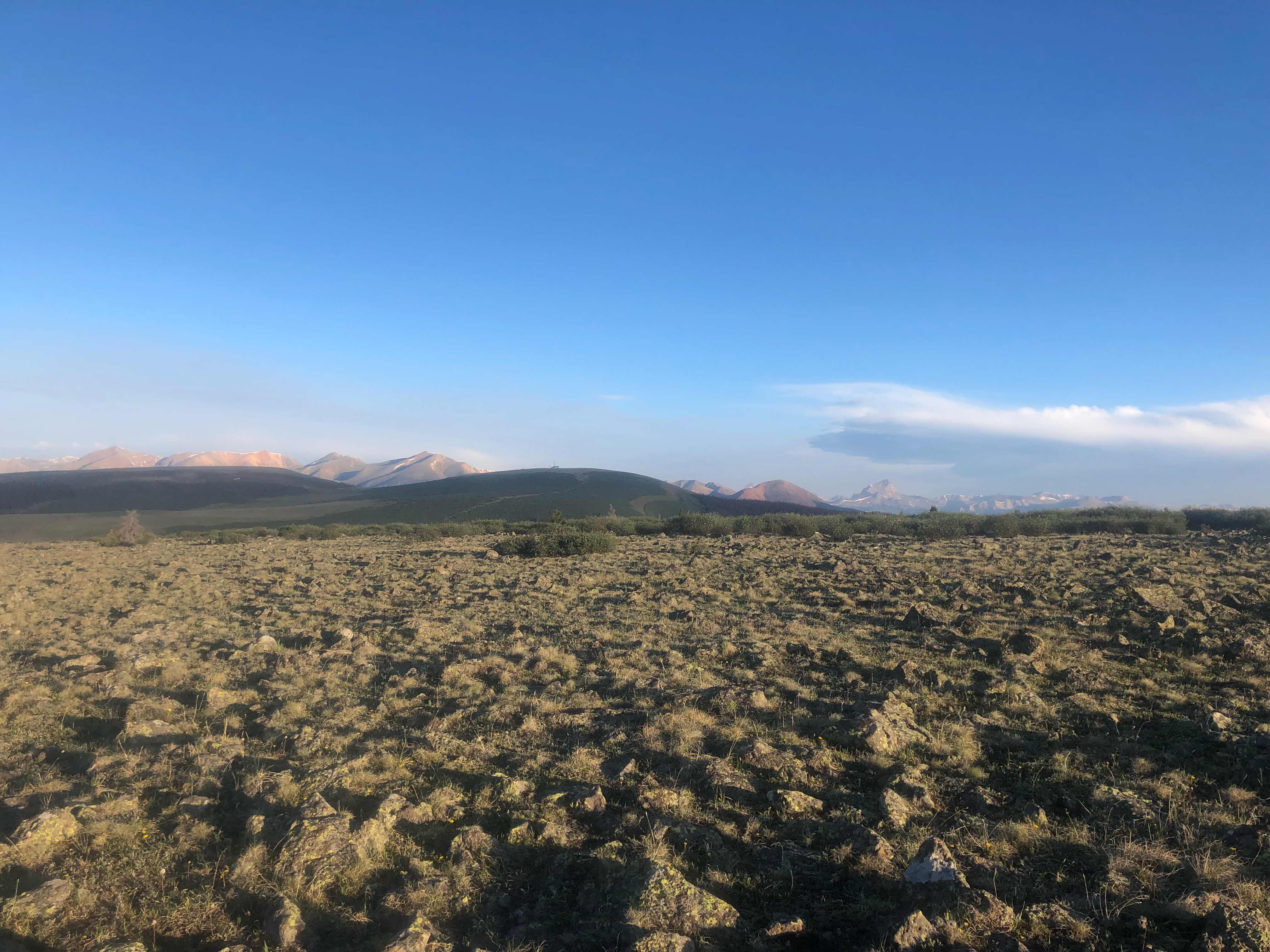 View from atop a mesa
I had planned on getting my own room for this town stop, but had a change of heart when I got a text from my dad. My resupply package to Monarch Pass required overnight shipping. Since it had to be sent UPS only it cost me $98. Wow! That ended up being an expensive four days of food. Turtle was up for splitting a room, so that worked out well. I went to find breakfast while I waited for him to make his way to town. I could have stayed at a local hostel for $20, but after last night the thought of staying in a bunk room did not appeal to me. 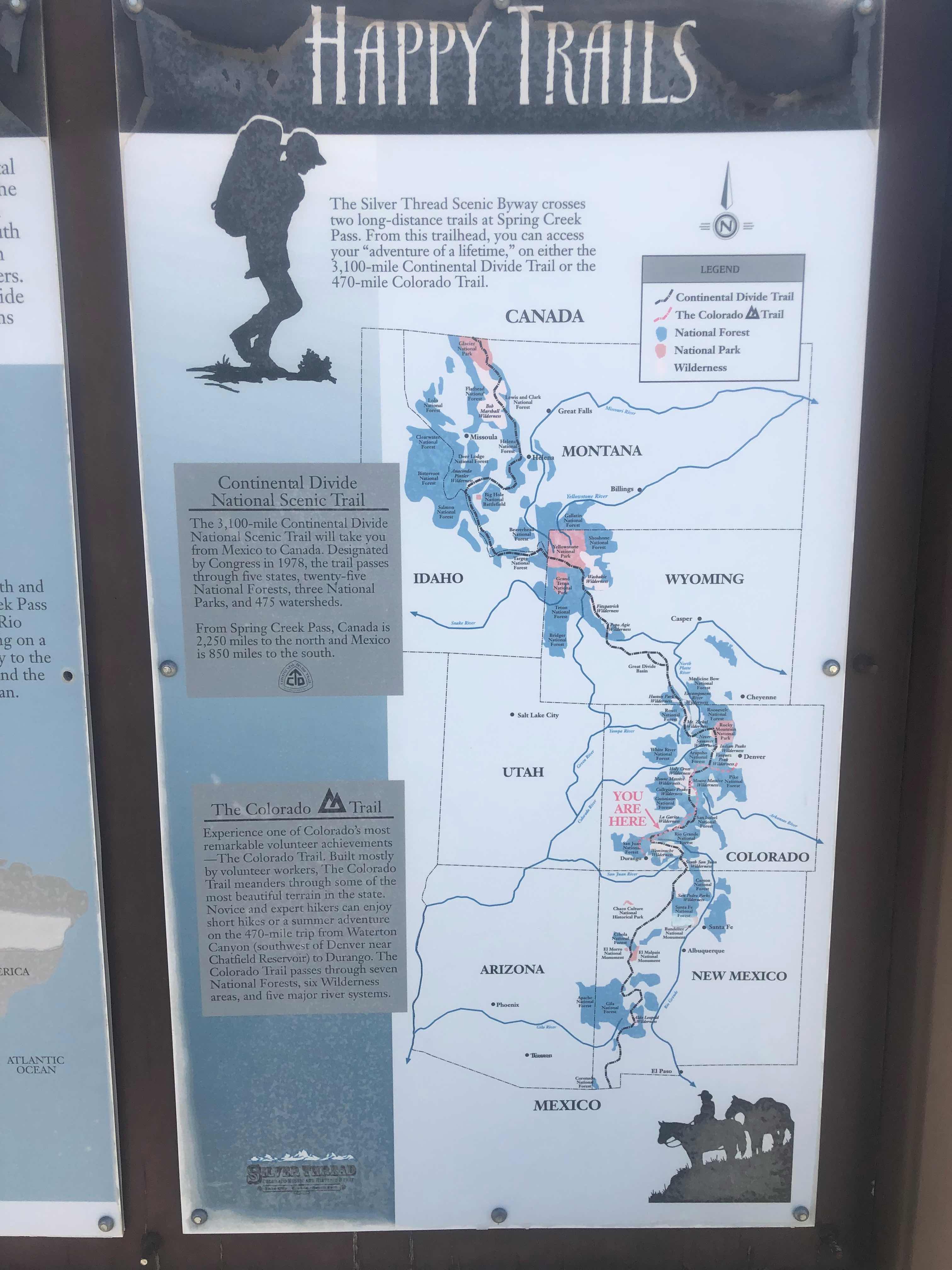 Sign at the Highway before town
Lake City is a cool little mountain town and everything is within walking distance. Turtle and I walked down to the laundromat. Just as we left the motel it started to pour. As soon as we walked into the laundromat it quit. The force did not seem to be with me the last few days. Turtle babysat our clothes during the wash cycle, while I went to the market. It was a very pricey resupply, but they had everything that a hiker would want. I finished the laundry while Turtle bought his groceries. We had a snack to eat at the bar next door before going back to the hotel. Once again it rained on us as soon as we left the bar and quit once we reached the motel. Our timing just seemed off. I took the time to try to find the leak in my sleeping pad. I’m pretty sure I found the problem and I hope my repair holds. I spent the next several hours planning out my next few resupply points. I don’t want to get caught off guard again and pay ridiculous prices for shipping. I also had to order a new hiking shirt, because my old one has a huge hole on the back. I was bummed to discover that I couldn’t get the same shirt anymore. I really liked that SmartWool shirt. I also had to get a new Swiss Army Knife because I lost mine in Wyoming. That is only the second thing I have ever lost on a hike. On the AT I lost a bandanna in the last hundred miles. I tend to keep pretty good track of my things.
I would like to thank a few people for their generosity. Thank you to Anita and Ron Watts for the awesome gift box. You managed to find all of my favorite foods and the Amazon gift card was perfectly timed to help out with my new gear. 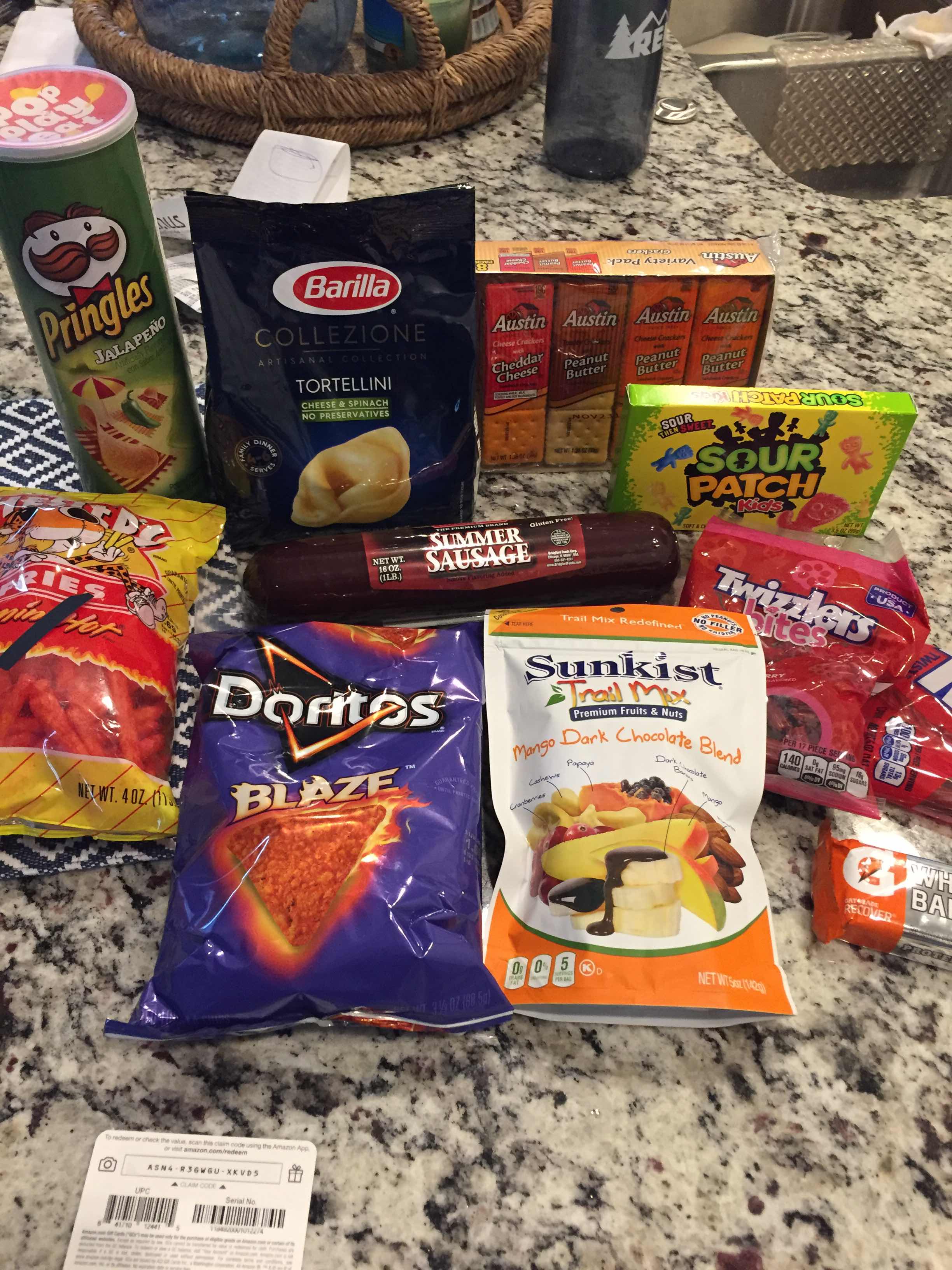 Such an awesome gift
I have forgotten several times now to thank Tammy Patterson for sending me magnesium oil early on in my hike. It really saved me early on with my over tight muscles. My mom put some in an 8oz Nalgene bottle which makes it really easy to carry with my other toiletries. I put it on my calfs almost every night. It helps ease my achy muscles and it helps me sleep. Thanks Tammy! I hope the boys are doing well and you’re getting them out hiking a little.
I want to wish a special little girl a very happy birthday! Today my youngest niece, Parker, turned seven. I can’t believe how fast she is growing up. Parker has such a beautiful smile and always lights up the room with her big personality and sense of humor. 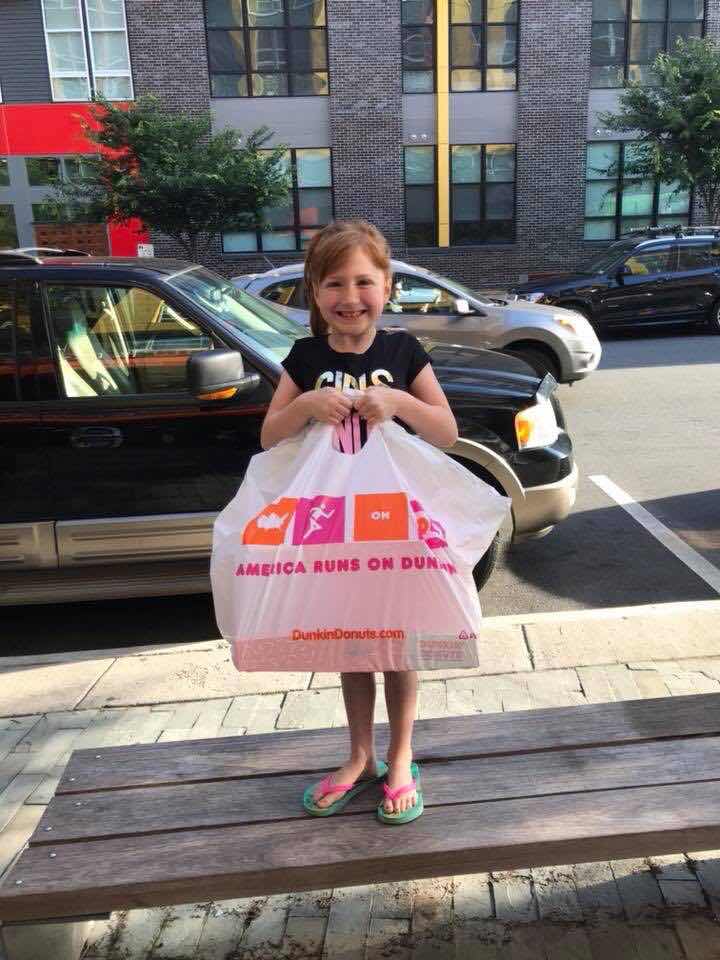 Happy birthday Parker
It looks like we might be in for days of bad weather. A big storm is supposed to hit on Saturday and the forecast leading up to it doesn’t look great either. This area desperately needs the rain, but I don’t relish the thought of hiking in it at 12,000 feet. Come what may, this trail won’t hike itself. Rain or shine, we leave town tomorrow.
“Success does not consist in never making mistakes, but in never making the same one a second time.”
– George Bernard Shaw