I had planned to get up this morning and be back on trail by eight o’clock. Well, that did not happen. Turtle and I woke up at 6:30 and promptly went back to sleep. I didn’t get up until nine o’clock. I think we all stayed up too late and had one beer too many. Since we were already running behind schedule Turtle and I decided to get breakfast. Action Jackson stayed behind and ate left over pizza. There is a local trail angel named Tom who gives rides back to the trail for free. We decided to give him a call before trying to hitch. We got lucky and he had time to give us a ride. Tom was a wonderful guy. He has been helping hikers with rides for a year. Once again the ride back to the pass went by quickly. So far Salida has been the most hiker friendly town to date.
Turtle still had to sort out his food resupply so Action Jackson and I started without him. We started the day off with an impressive climb up and over the Monarch ski area. It was very surreal to be hiking in a ski area. I almost felt like I was back home in Telluride. Now that I have hiked Monarch, I’d love to come back and snowboard on the runs I hiked up. 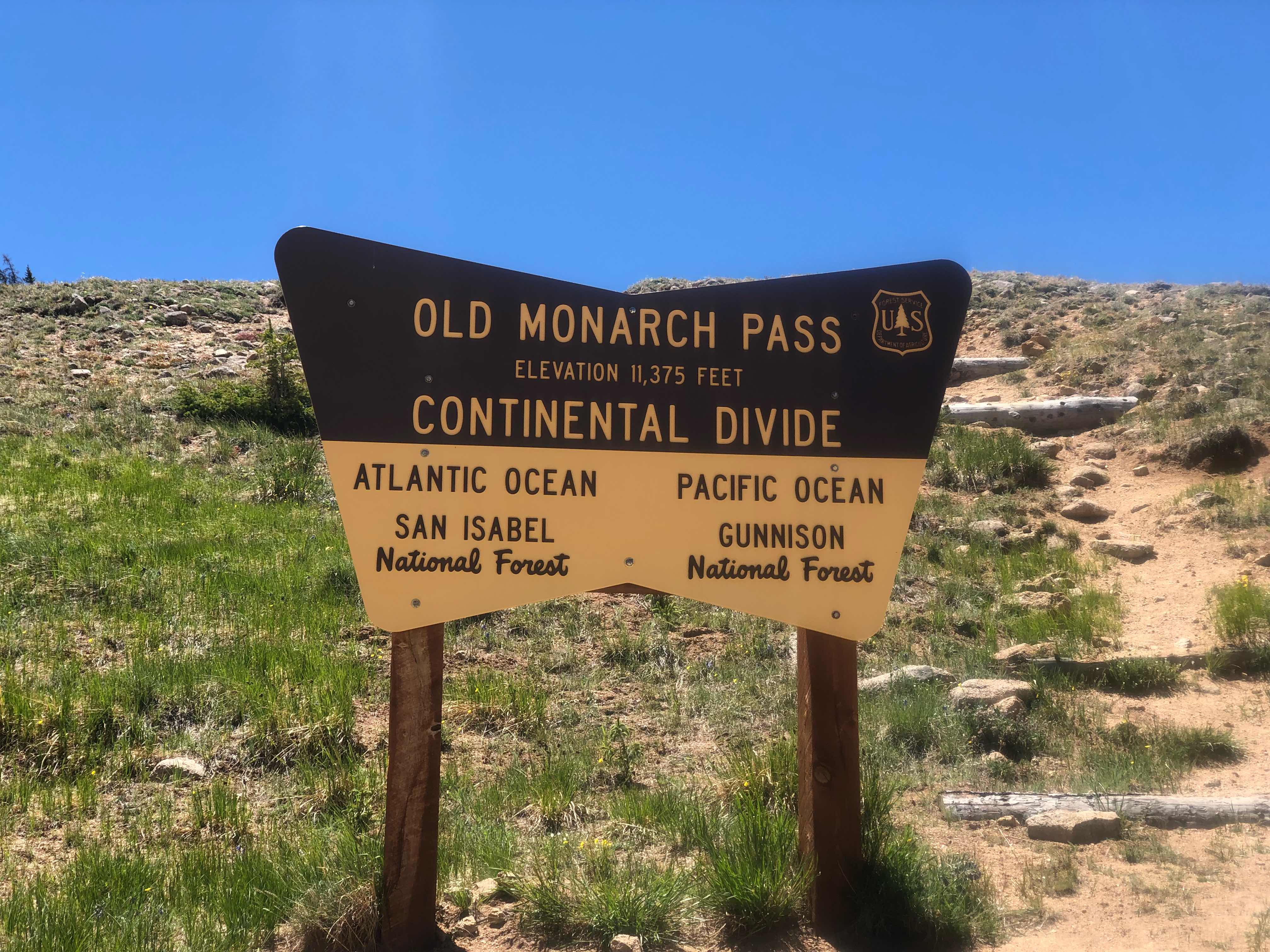 Not to be confused with New Monarch Pass 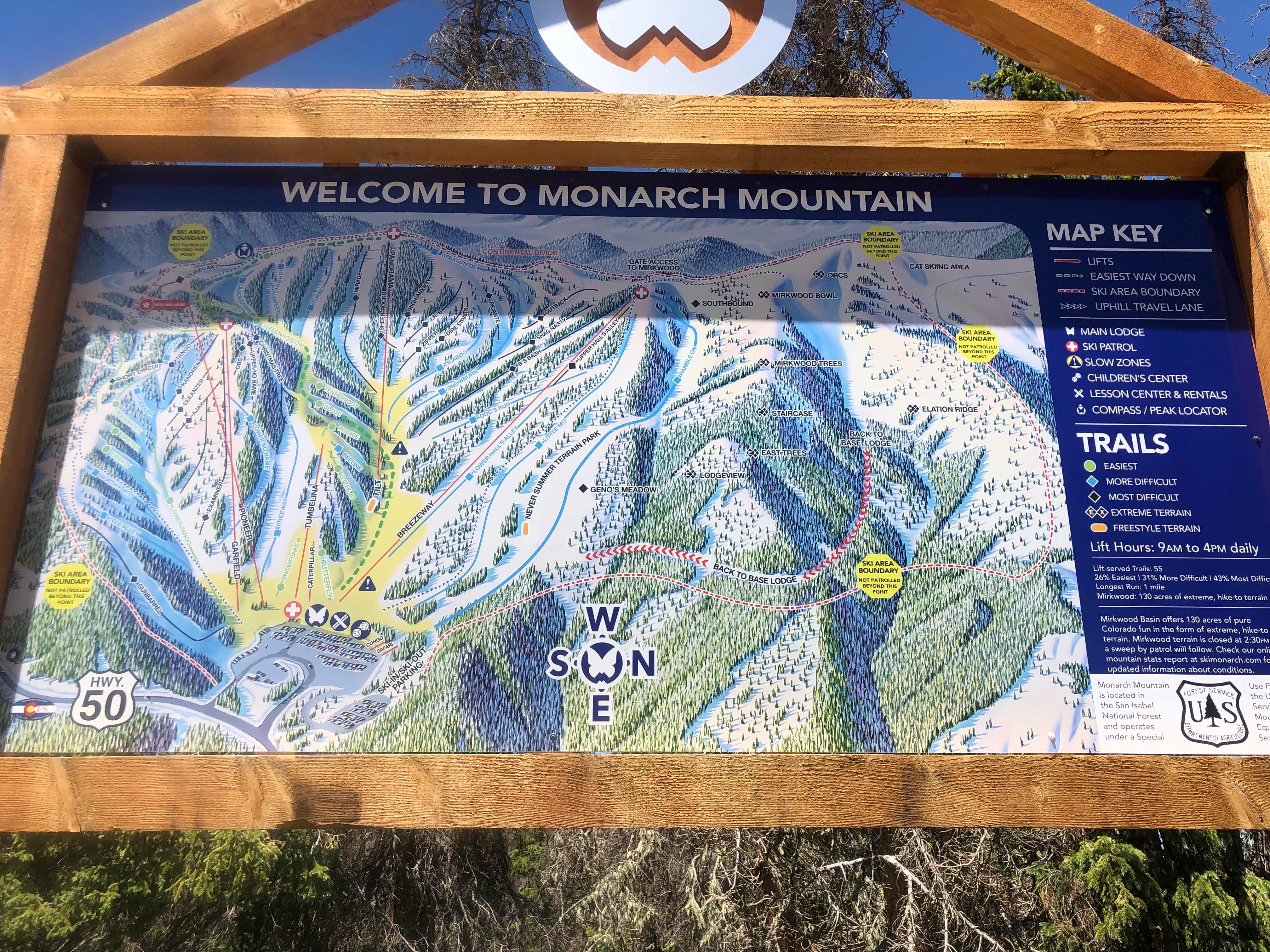 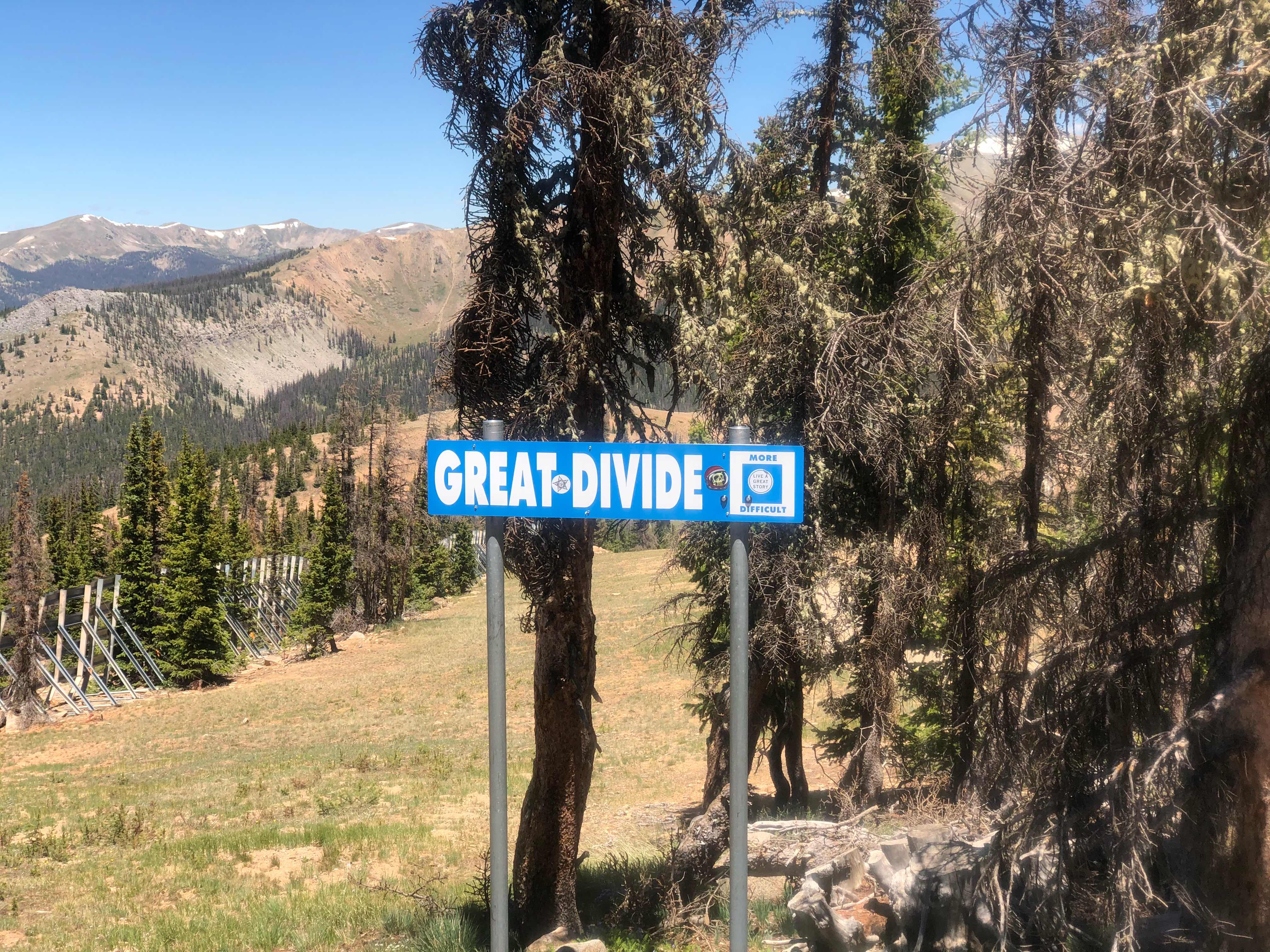 Intermediate run on the Divide
Today we actually got to hike on the Continental Divide. Considering the name of the trail is The Continental Divide Trail, we have spent very little time on the actual divide. My legs felt very tired today. I would have thought that after taking a day off they would feel nice and rested, but instead I felt lazy. Hopefully tomorrow I’ll be back to normal. With getting such a late start I had zero expectations for my mileage. Honestly I would have been happy to just get fifteen miles in. This section should be one of the best of the trail, but it looks like it might be one of the hardest as well. I have some ridiculous elevation changes coming up in the next few days. 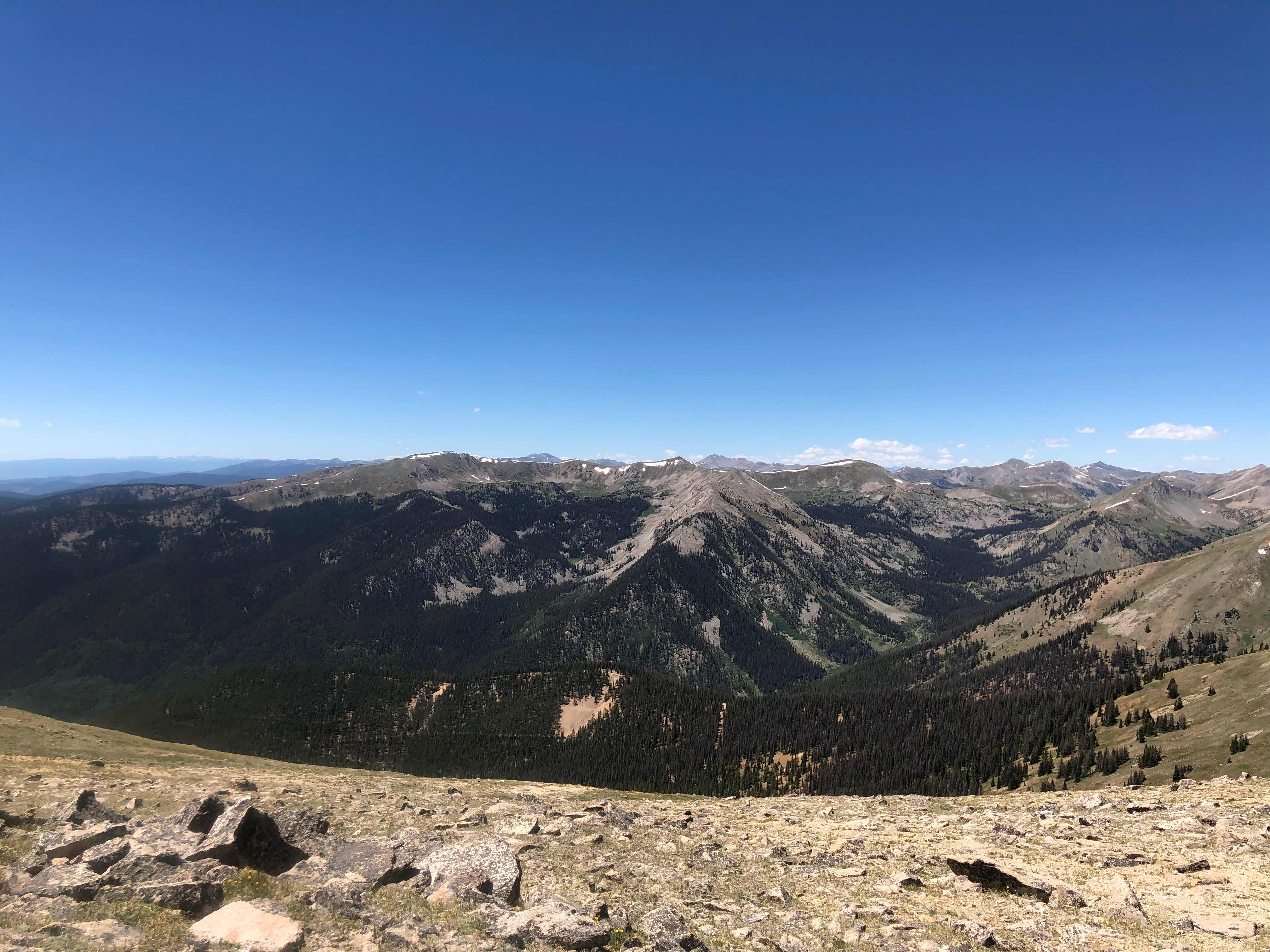 View from atop the divide
I was really hoping the miles would pass by quickly, but the views were so incredible I found myself taking a lot of breaks. So far the Collegiate Moutain range has lived up to the hype. I can’t wait to really get into them tomorrow. 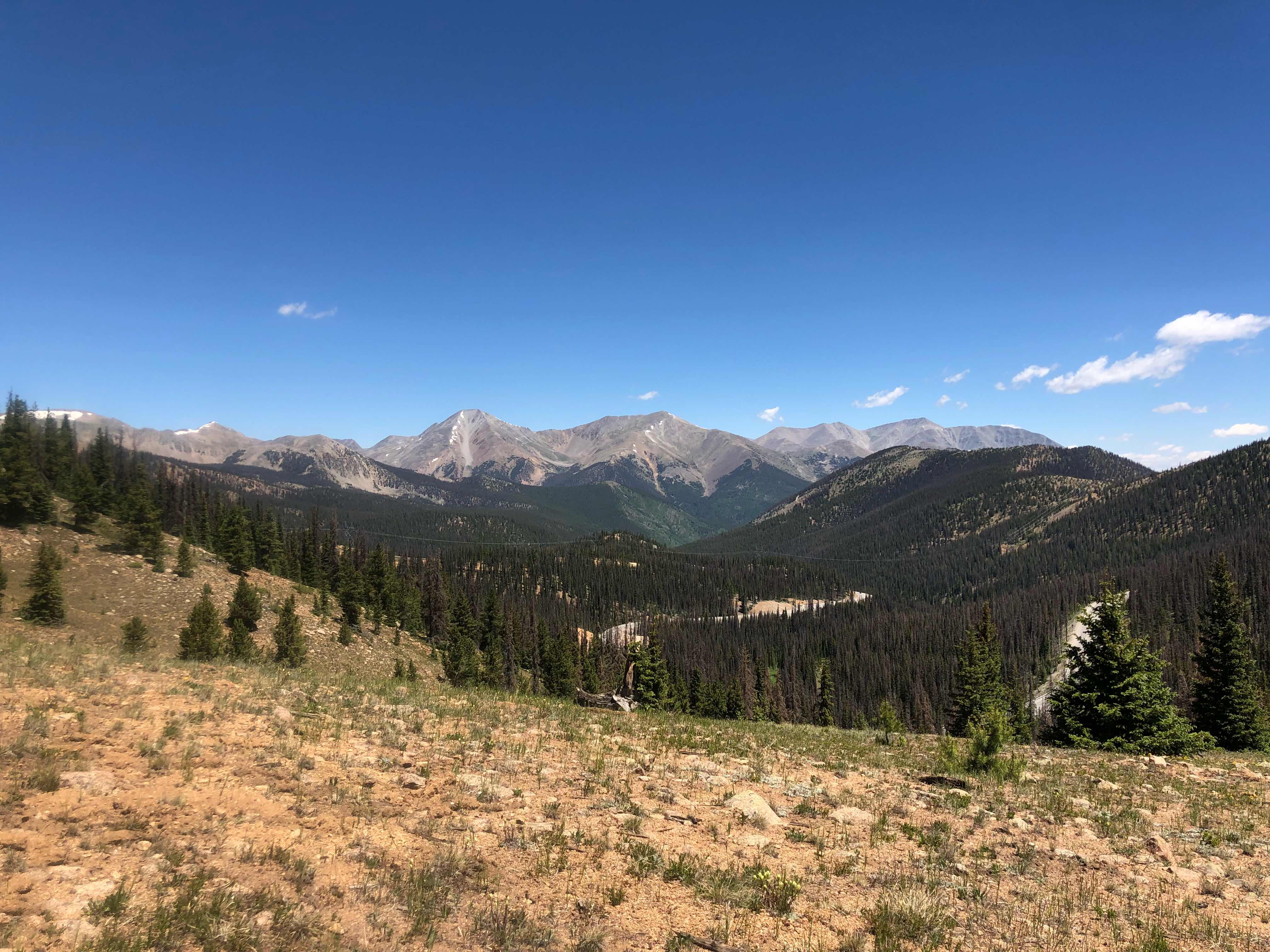 Just a sample of what the terrain looked like 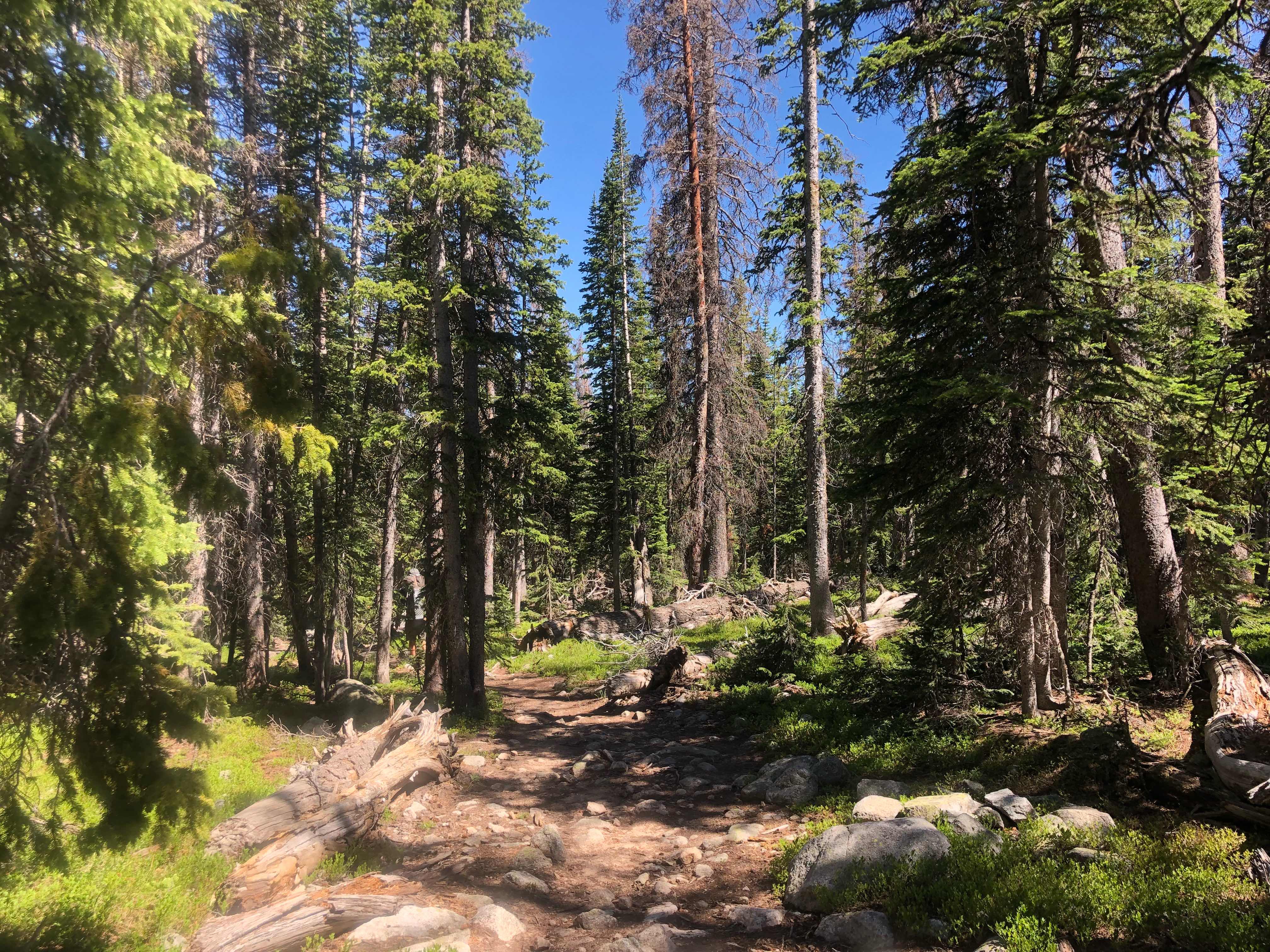 Walked through some forests 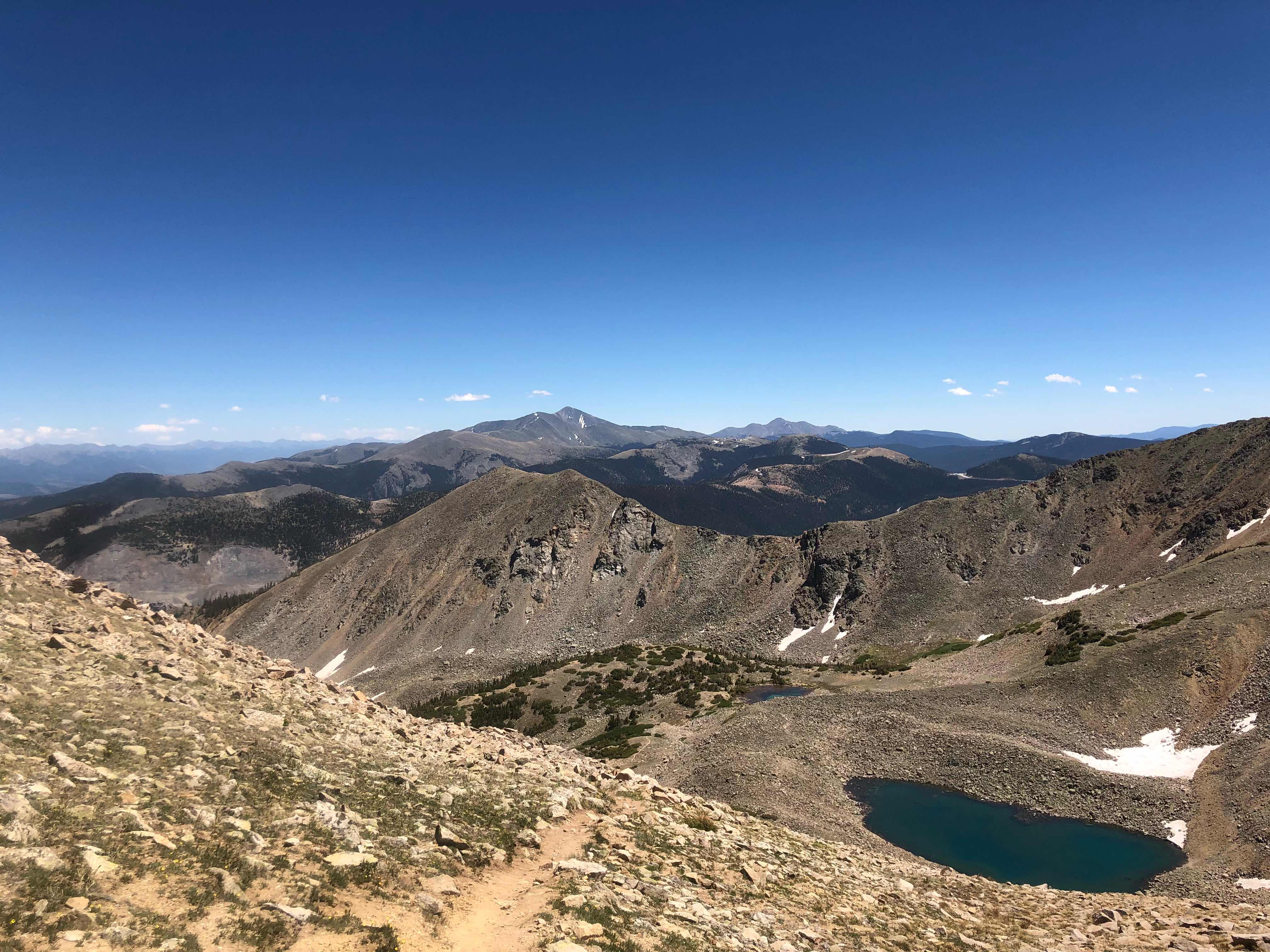 Had some nice alpine lakes 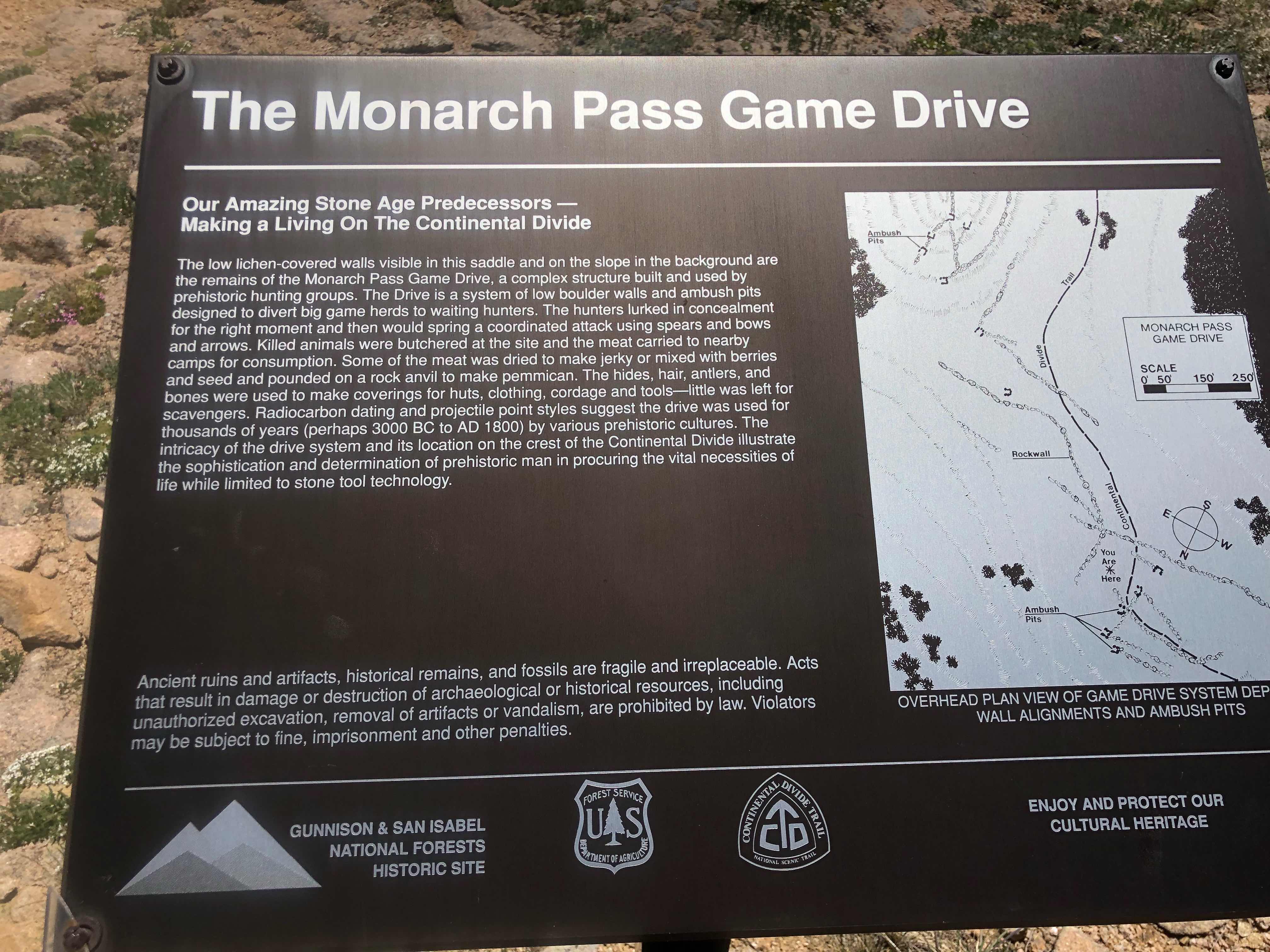 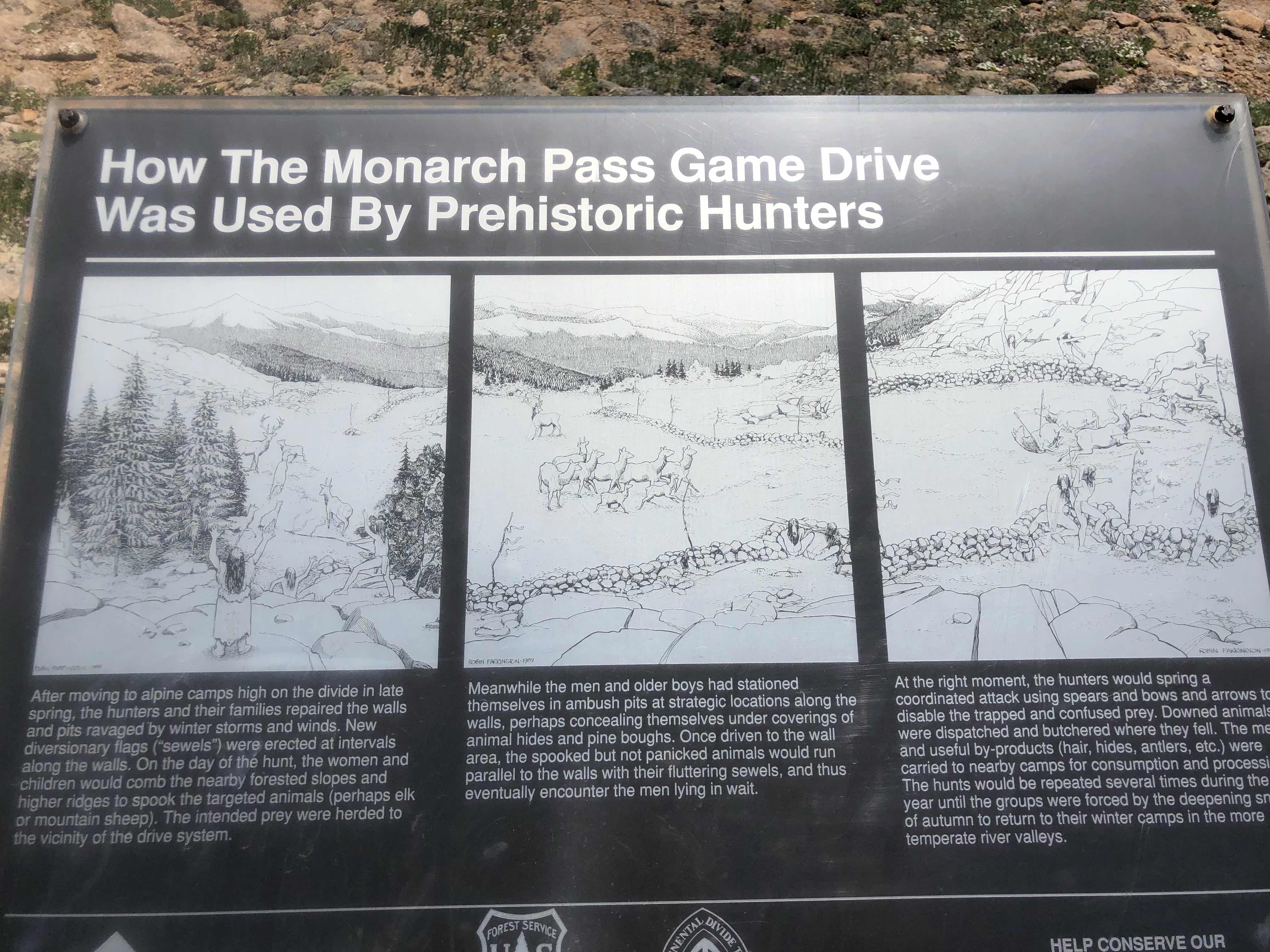 A little historical info
I also bought myself a new toy while I was in town. I’ve been meaning to download a new app for my phone for awhile now, but I always forget. Today AJ reminded me that I really wanted to buy an app called, Peak Finder. It works offline so I can just get my phone out and use the app to look at the surrounding mountains. It will tell me what mountains I’m looking out. So far I have really been impressed by it. 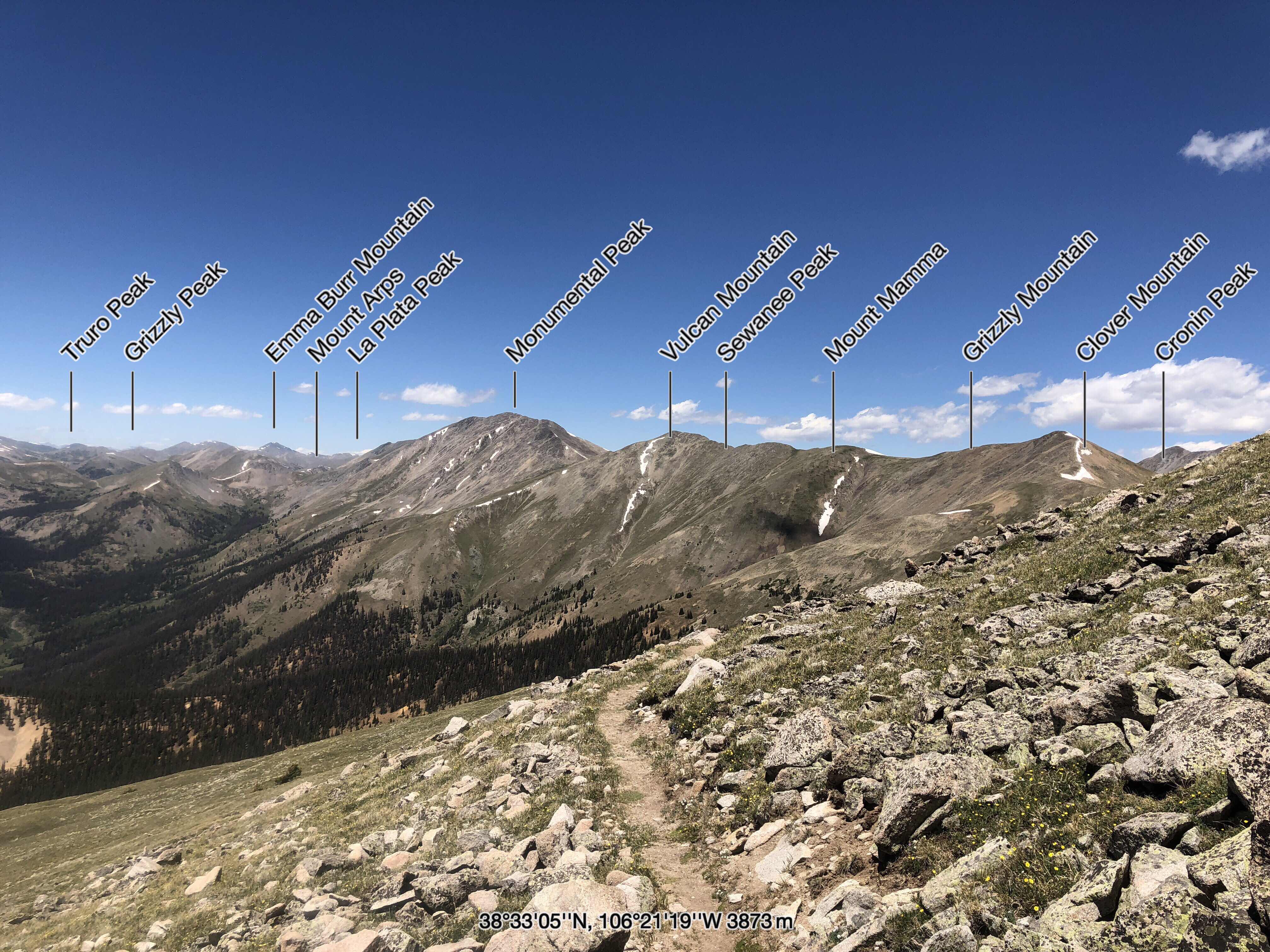 So cool
Even with all of my breaks today I still managed some respectable miles. I made it to our prearranged camp spot to find Action Jackson was already there. He was camped with four other people. I tend to enjoy camping with fewer people. The fewer the people the less noise and the better I sleep. I still had over an hour before it got dark so I decided to hike a little farther. I stopped to get some water a few tenths of a mile away, then I started looking for some flat ground. While I was looking for an acceptable place to camp I heard a noise in the bushes. As I turned to look a fox came running out. I hadn’t even considered seeing a fox as a possibility on my list of possible wildlife sightings. This fox was completely and utterly not impressed with my presence. He got to within a foot of me before I scared him away. I’m pretty sure that people camp in this area frequently and they probably feed him. 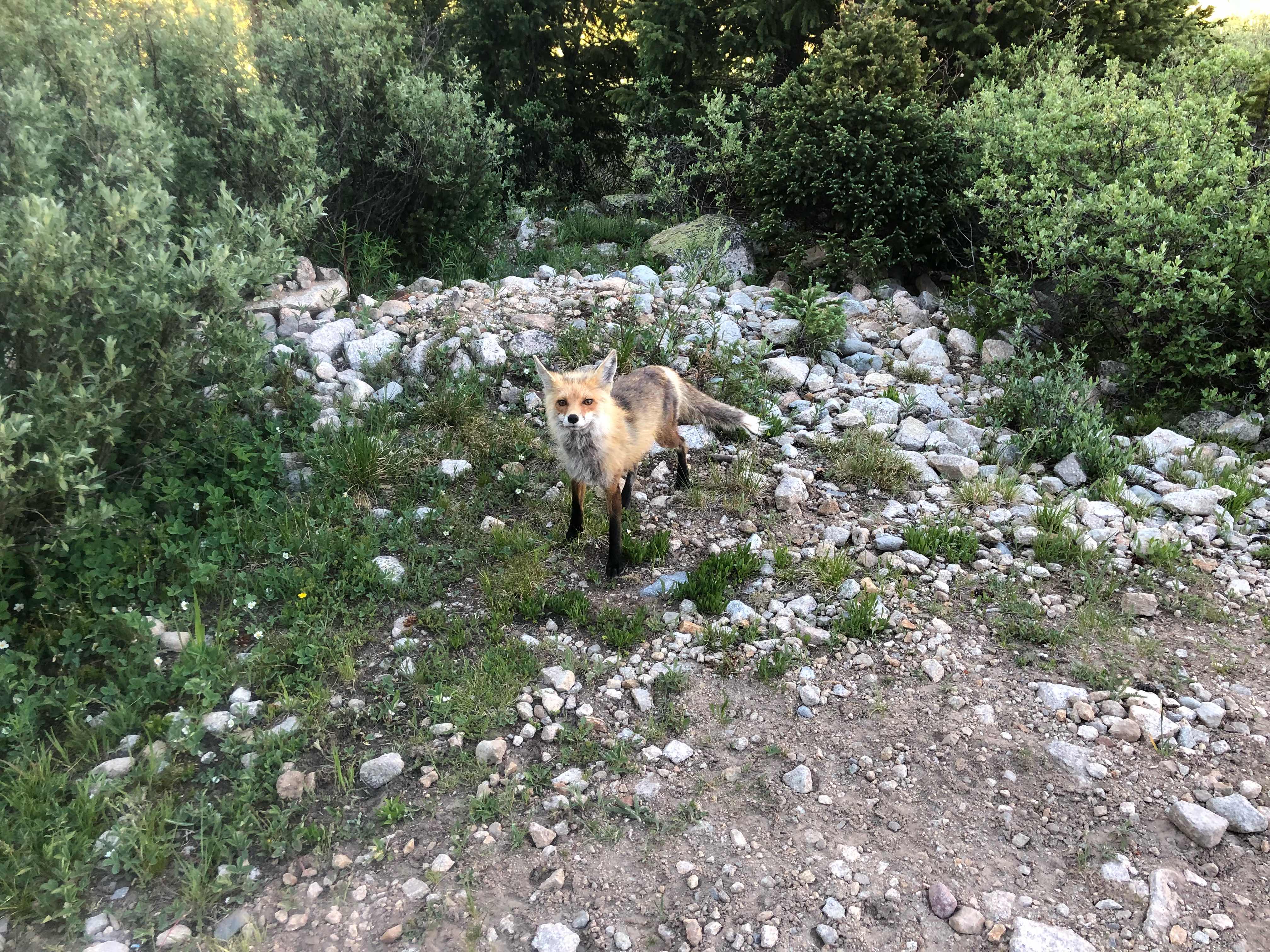 What does the fox say
I hiked about a quarter of a mile further before I found an ideal place to camp. I set up quickly and started to cook my dinner. I am enjoying some of the food I dehydrated before starting the trail. Tonight’s dinner consisted of chicken fajitas and flaming hot Cheetos followed by some Oreos. It might not be a gourmet dinner, but it is a lot of calories. As I was starting to eat Turtle made it into camp. He set up close by and as he was cooking dinner the fox found us. He circled and circled us. Turtle trying throwing a few rocks to scare him away, but it seemed to think that Turtle was throwing him food. Finally I had enough and jumped up and started to chase him. I threw in a blood curdling scream for good measure. That seemed to do the trick. Hopefully he doesn’t return while we are sleeping. I’m cowboy camping and there isn’t a spot to hang out food. I’ll just have to make due with putting my food in my pack and putting my pack next to me. 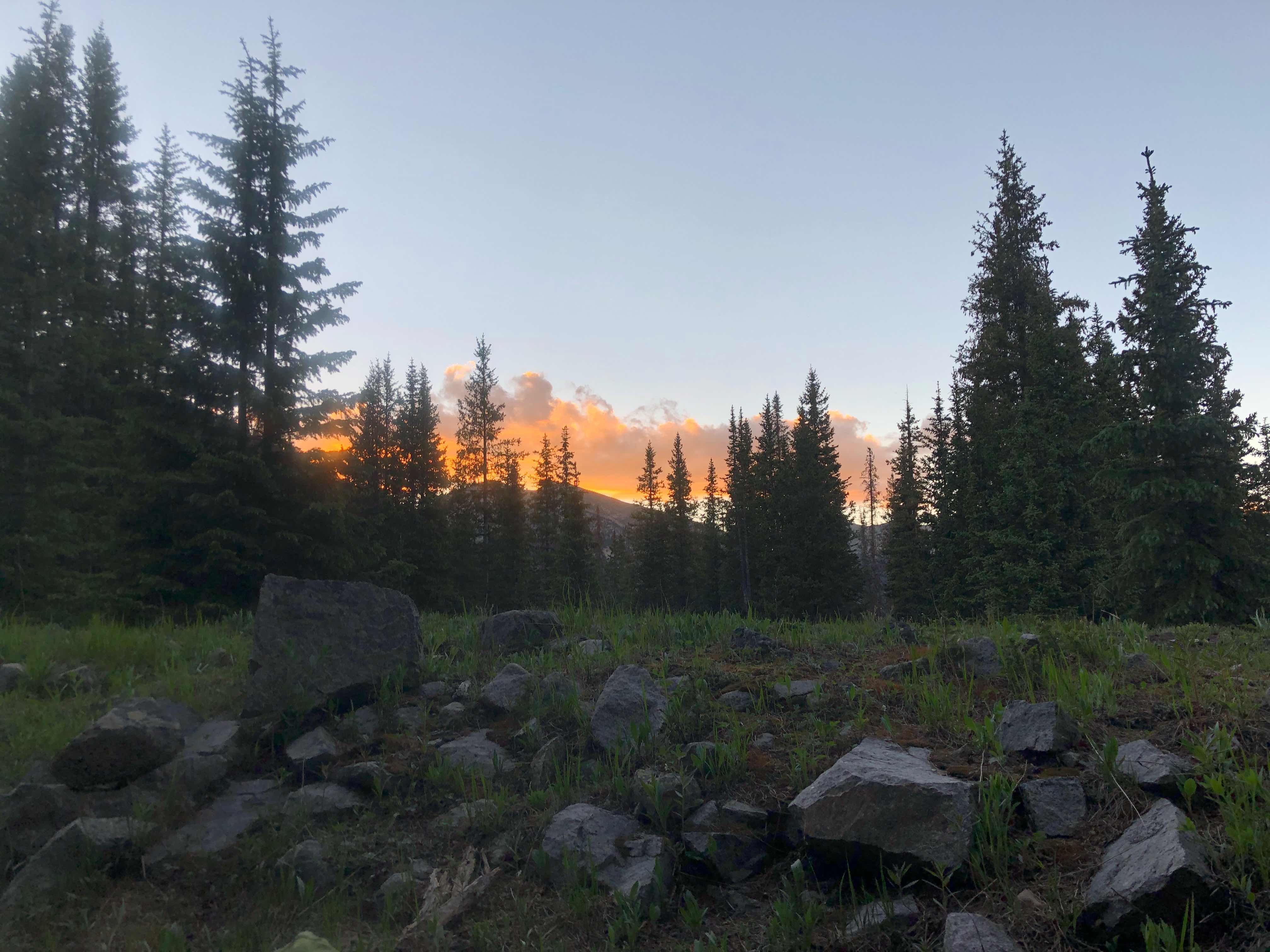 Sunset from camp
“Give yourself a gift of five minutes of contemplation in awe of everything you see around you. Go outside and turn your attention to the many miracles around you. This five-minute-a-day regimen of appreciation and gratitude will help you to focus your life in awe.”
- Wayne Dyer