I was so tired and it was dark when I got to camp last night so I didn’t bother setting up my tarp. I knew there was a good chance that it would rain, but I was lazy. At least I had the foresight to put the tarp right next to me. Around midnight it started to rain. I just reached over and covered myself with the tarp. Luckily, it wasn’t a hard rain and it didn’t last long. I also learned a good lesson about cutting corners. The spot I chose to camp at was well sheltered and I stayed warm.
Today was another tough day with a major pass to climb over to start the day. I probably shouldn’t have skipped dinner last night. I was noticeably sluggish this morning. I felt like I was swimming through molasses making my way up Lake Ann Pass. It took me about 2.5 hours to go 4.5 miles. I also gained about 3,000ft of elevation. 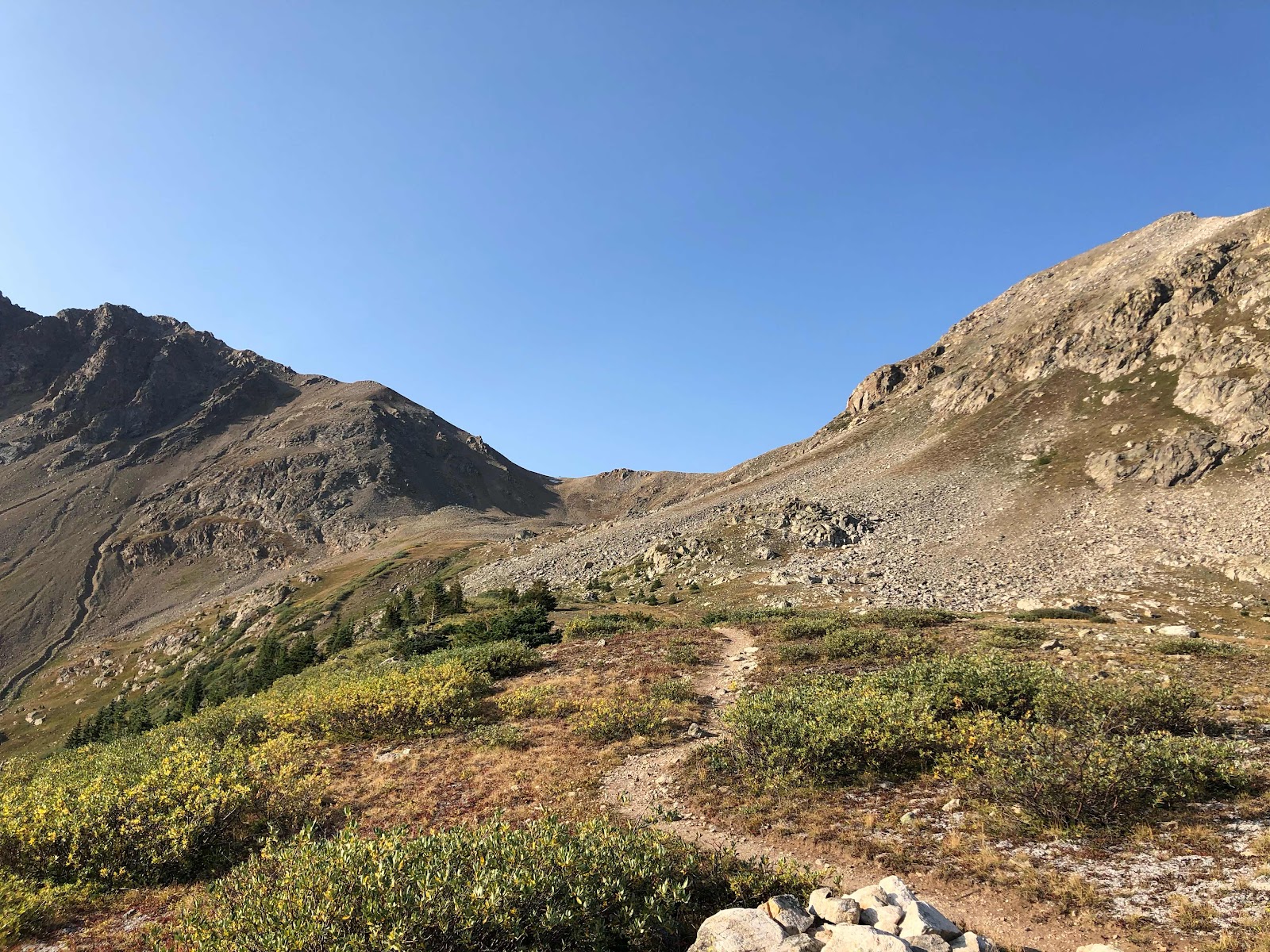 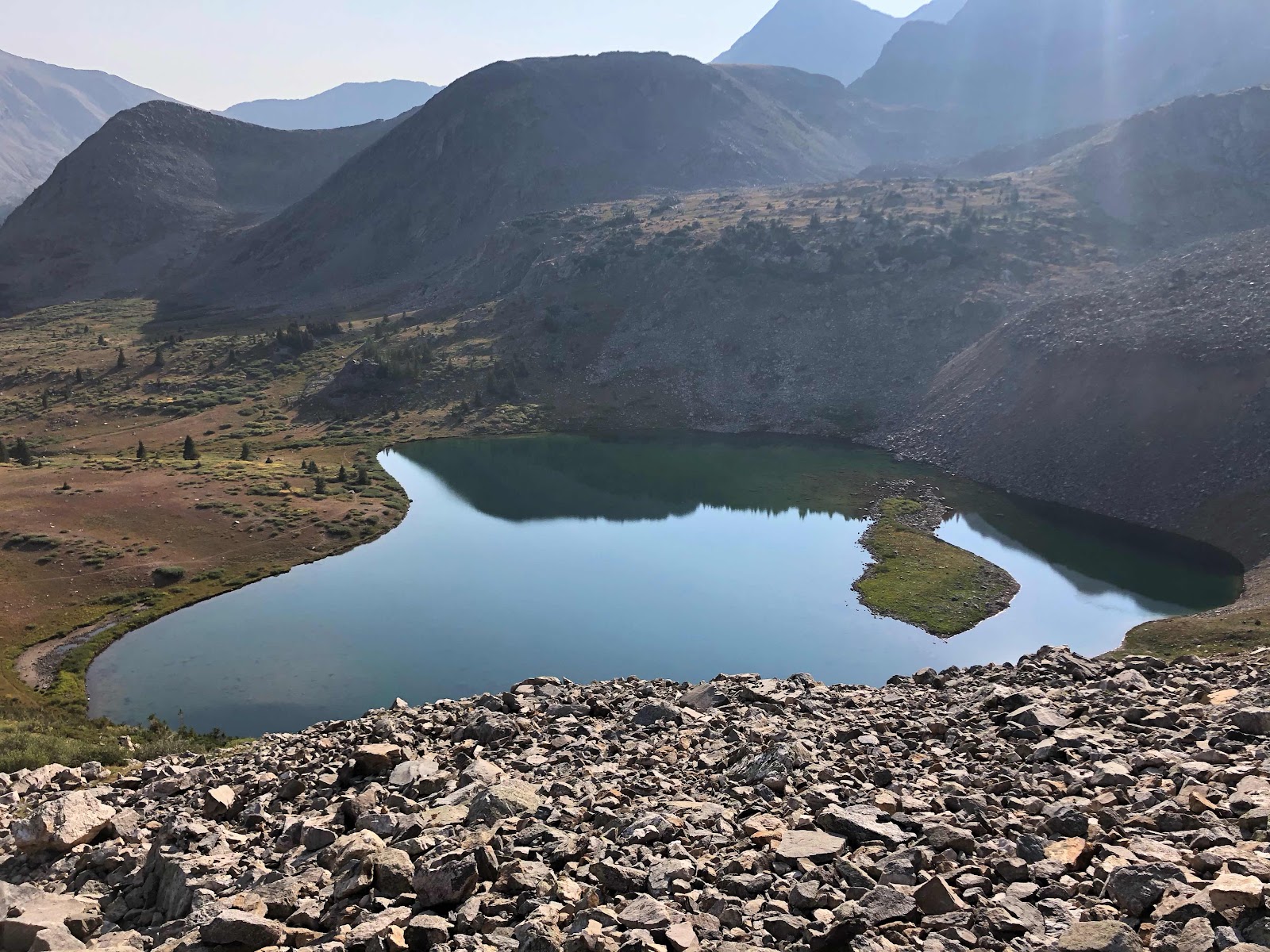 Lake Ann
At least this time of year the Pass didn’t have any snow. In 2018 it had a cornice I had to down climb that was super sketchy. When I finally made it to the top I was rewarded with a great view. I chatted with a mother and daughter who are hiking the Collegiate Loop. I asked them to keep an eye out for Flaming Hot. If they saw him I asked them to tell him I was at the top of the Pass at 9:30. This way he would know how close or far behind me he was. 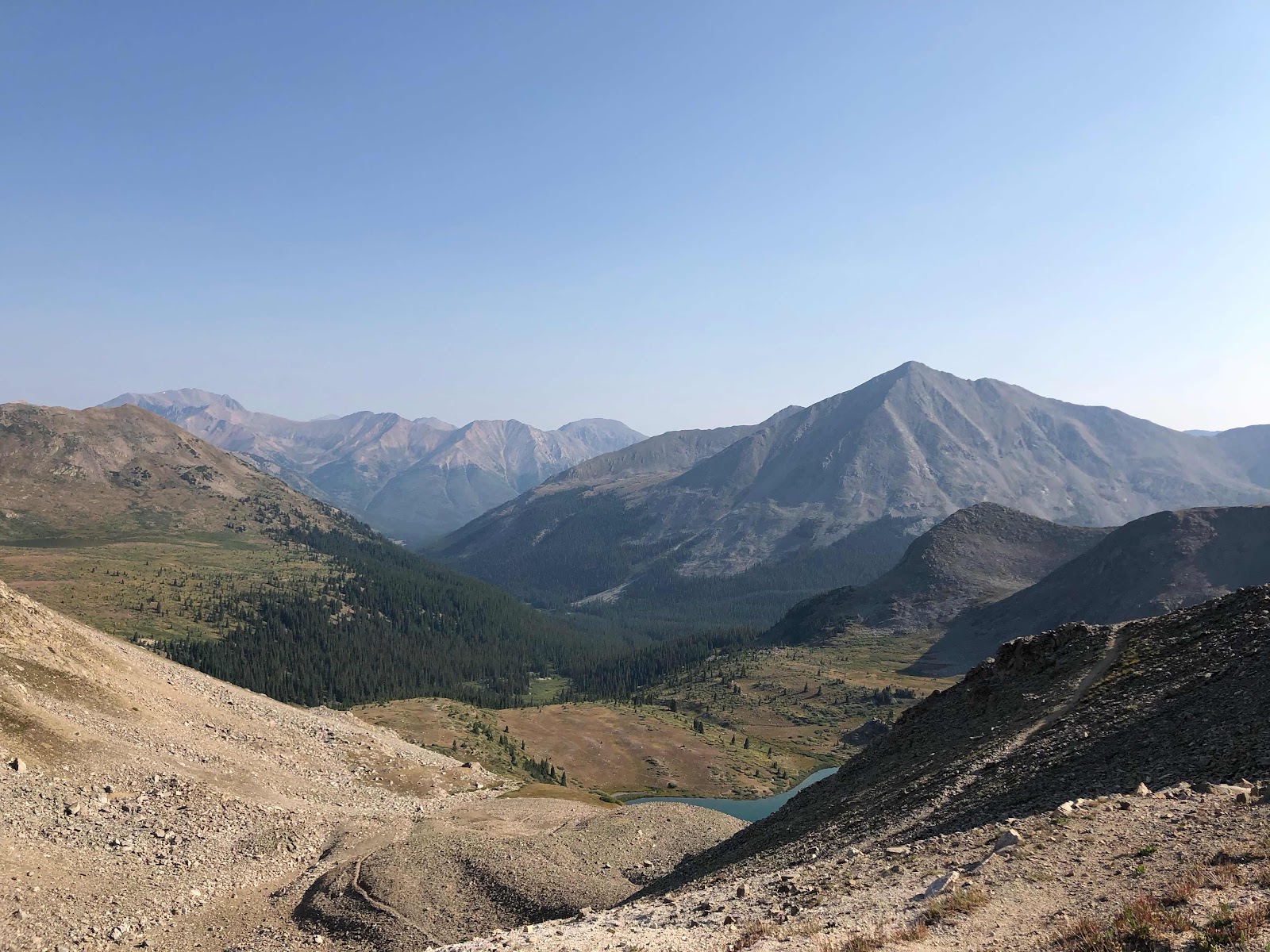 View from Lake Ann Pass
I spent the remainder of the day working my way downhill. Some of the descents were steep and rocky, others were so gradual it was hard to tell I was going down. Today probably would have been much more enjoyable if I didn’t have a major chafing issue. I just bought a new pair of Nike running shorts for this trail. After only washing them twice the inner compression liner has torn. The tears lead to weird rubbing today. After about 8 miles I was rubbed raw and had started to bleed. It became apparent that I need to stop and do something about it. I used the rest of the leukotape I was carrying and it worked well. I tried to use duct tape yesterday and I think that made it worse. Once I had that taken care of my day was much better and the miles came easier. This section of trail allows dirt bikes on it. I was hoping I wouldn’t have to deal with any, but I came across two guys halfway through my day. They were very nice and super considerate of the trail. It had started to rain and the trail was getting a little muddy. They seemed were being extra careful not to tear up the trail. They asked me how close they were to a trail junction and how steep it was to get there. I took the time to show them my map and the elevation gain. They decided it was best to turn around. I really didn’t like having to smell their exhaust fumes for the next 5 minutes. 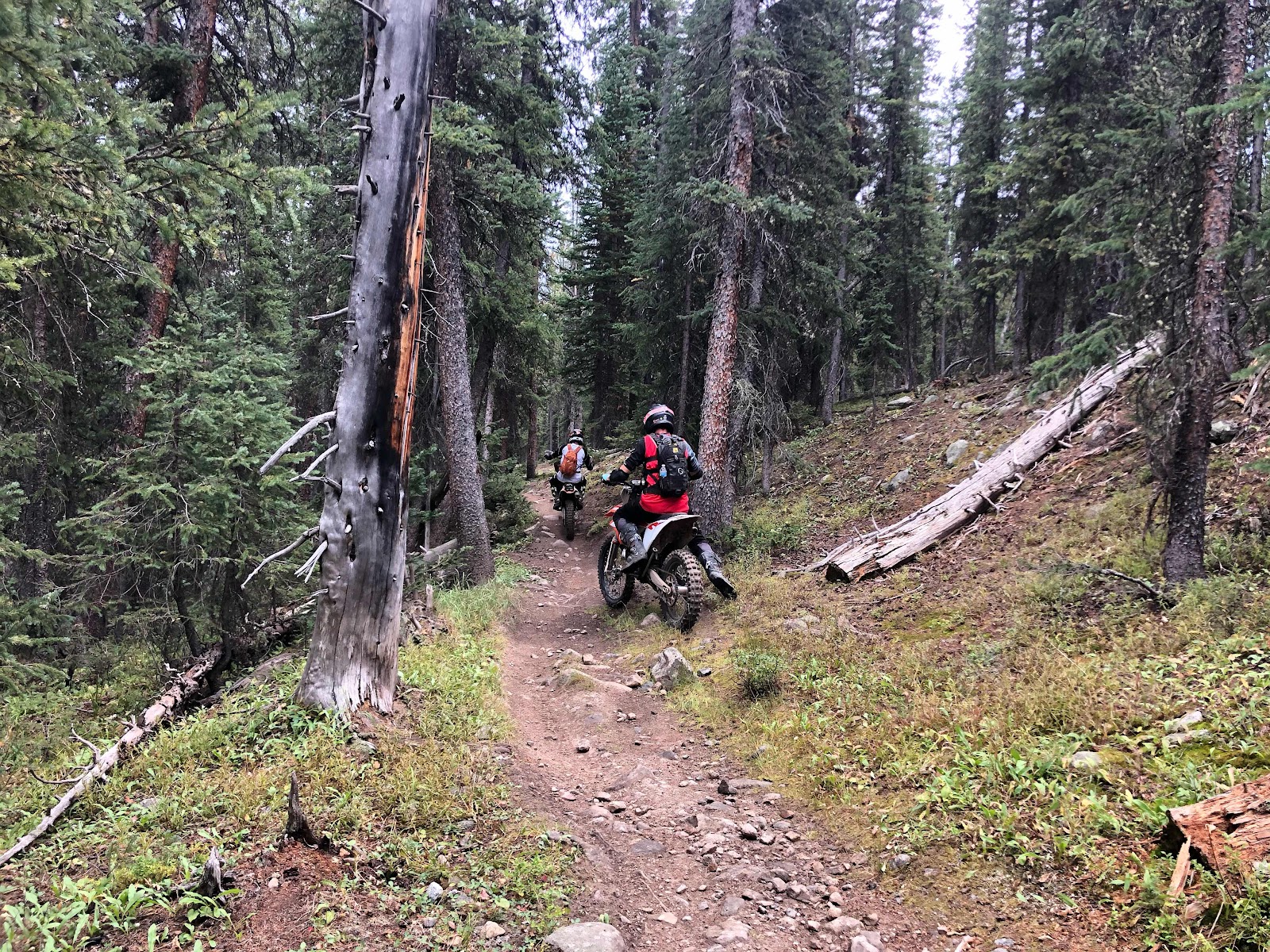 Not only did I have to deal with muddy trail, but I had quite a few stream crossings to contend with. I managed to find dry ways across them all. Three of them have small logs to use to get across. The rest had rocks that were perfectly spaced to help me across. 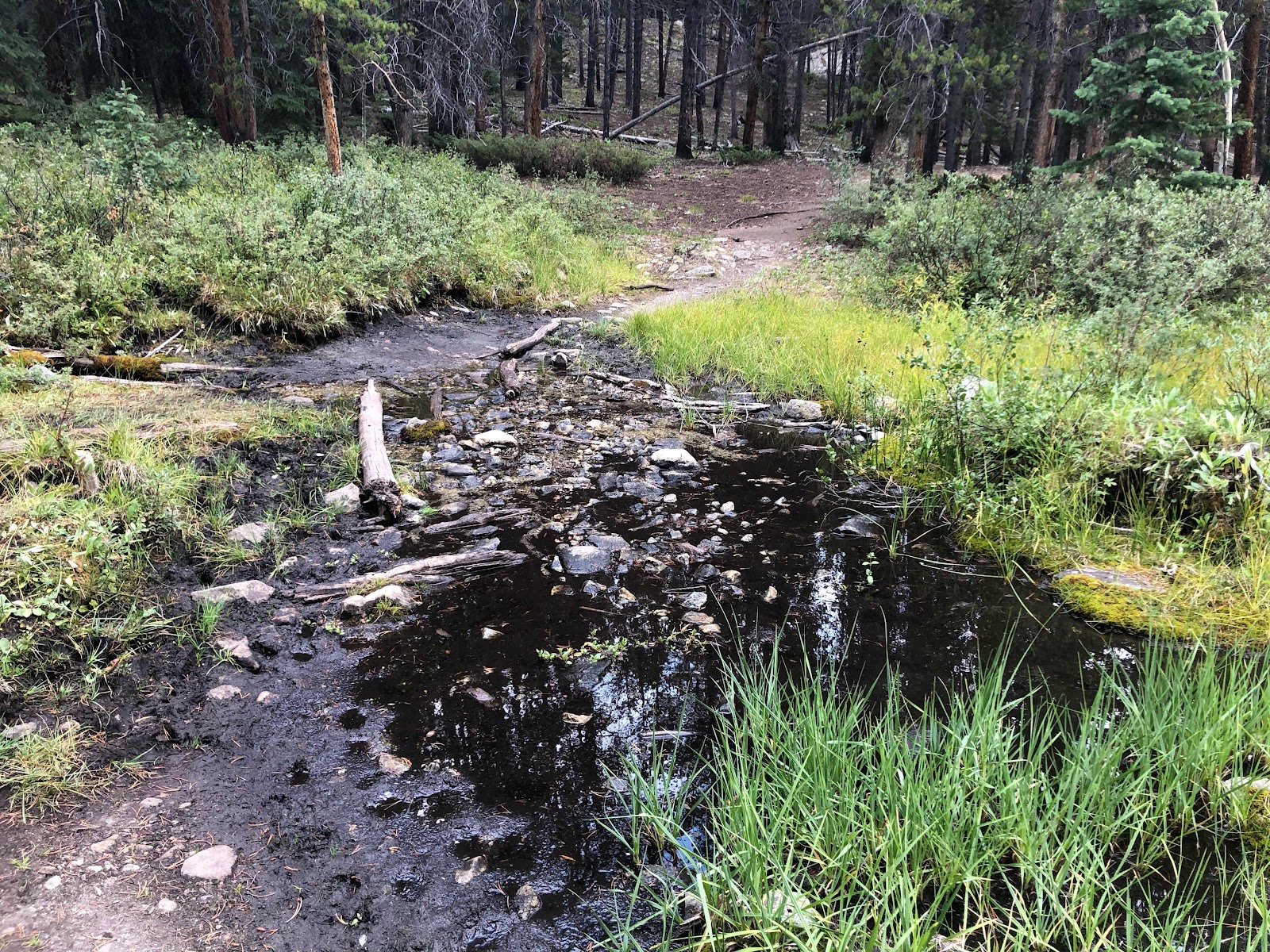 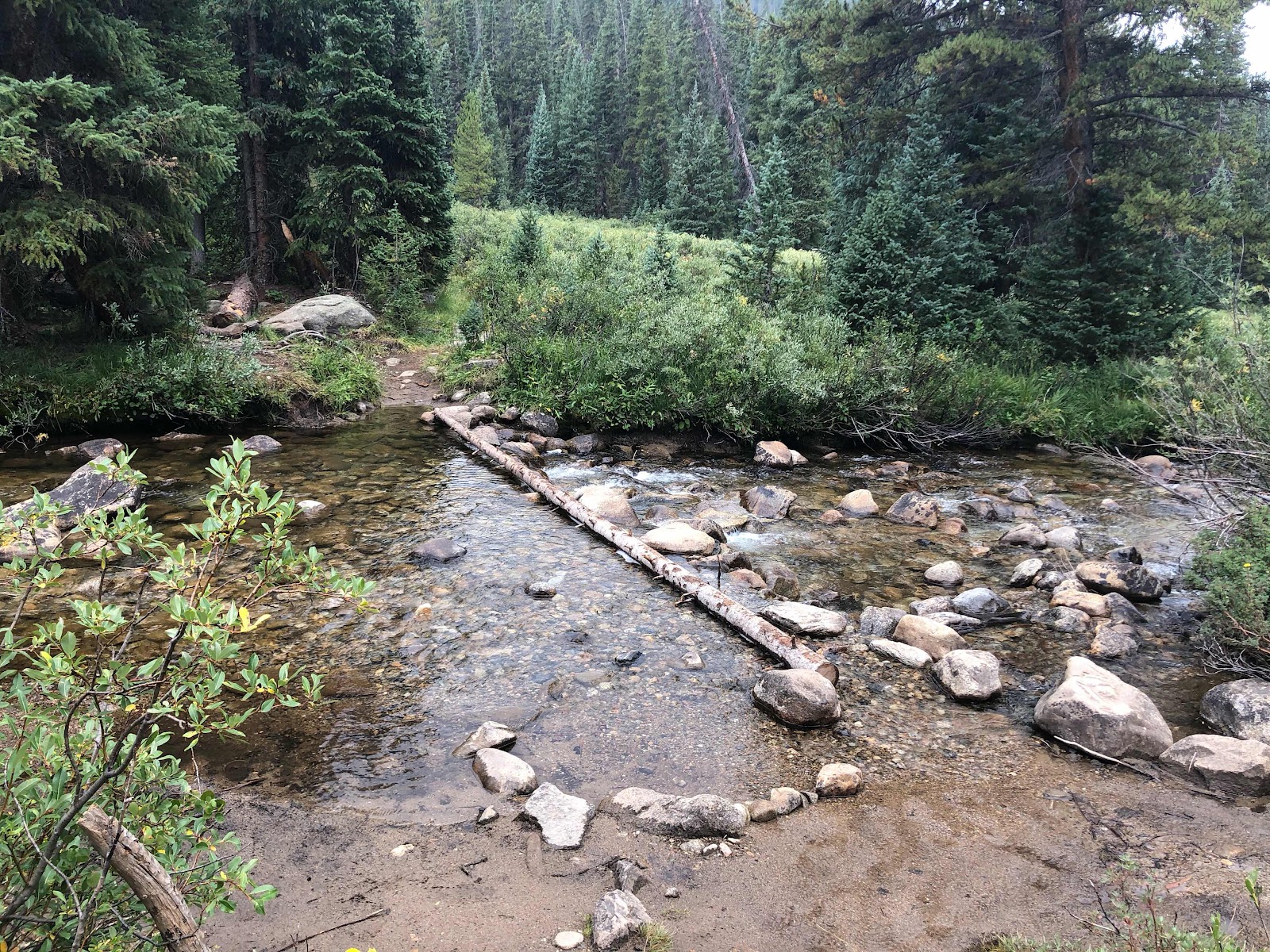 Nice log crossing
The real highlight of the day came in the last mile before making camp. I came across a huge willow patch. Moose love that kind of terrain. I turned off the music I was listening to because I just had a feeling I would see a moose. Within seconds I saw one way in the distance. It was so far away I couldn’t get a decent picture. A few minutes later I saw a giant bull moose wishing 15 feet of the trail. He was beautiful and could have cared less that I was there. He must be used to hikers walking past his spot all day. As I was watching him two more moose appeared. That was definitely a great way to end the day. 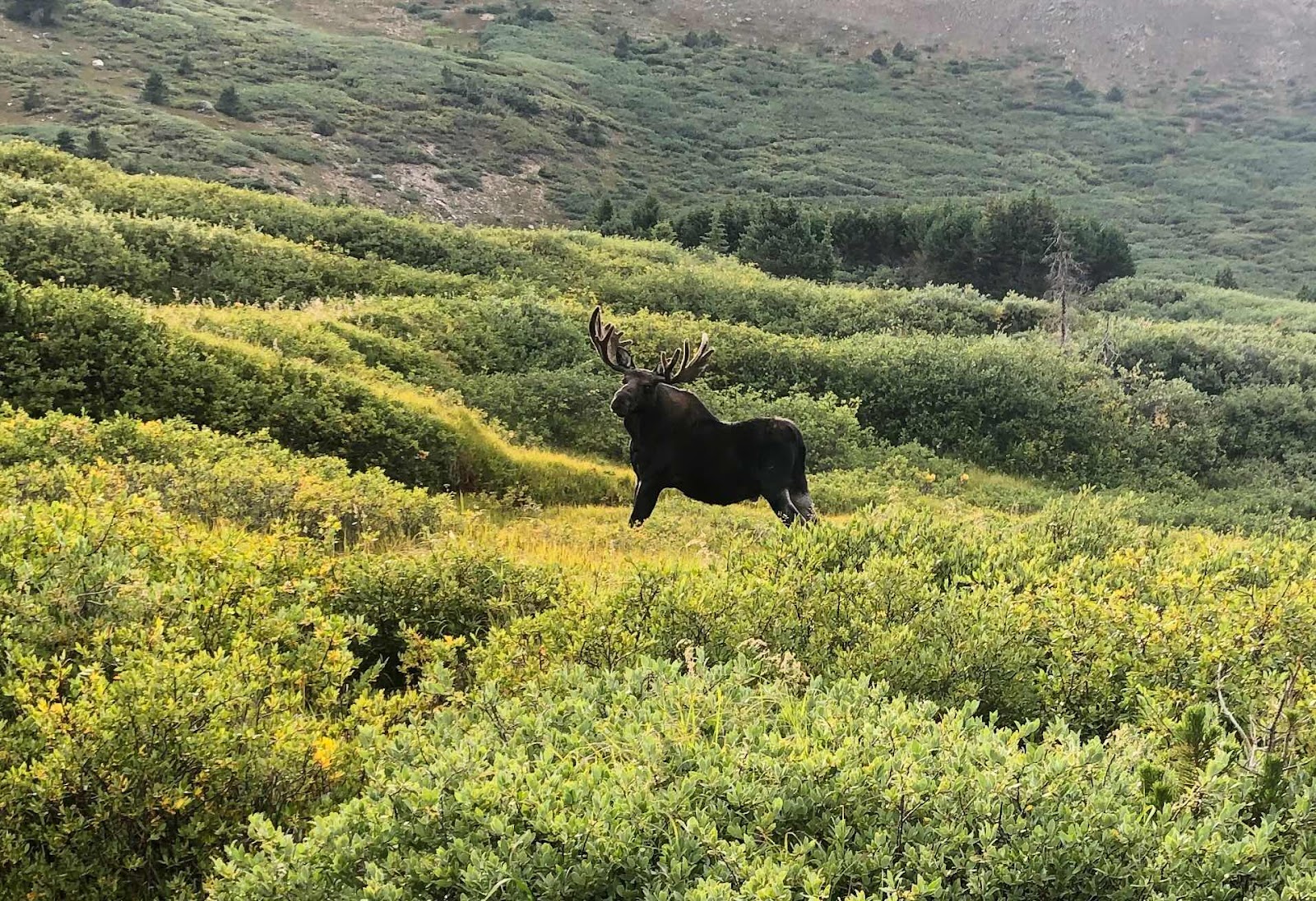 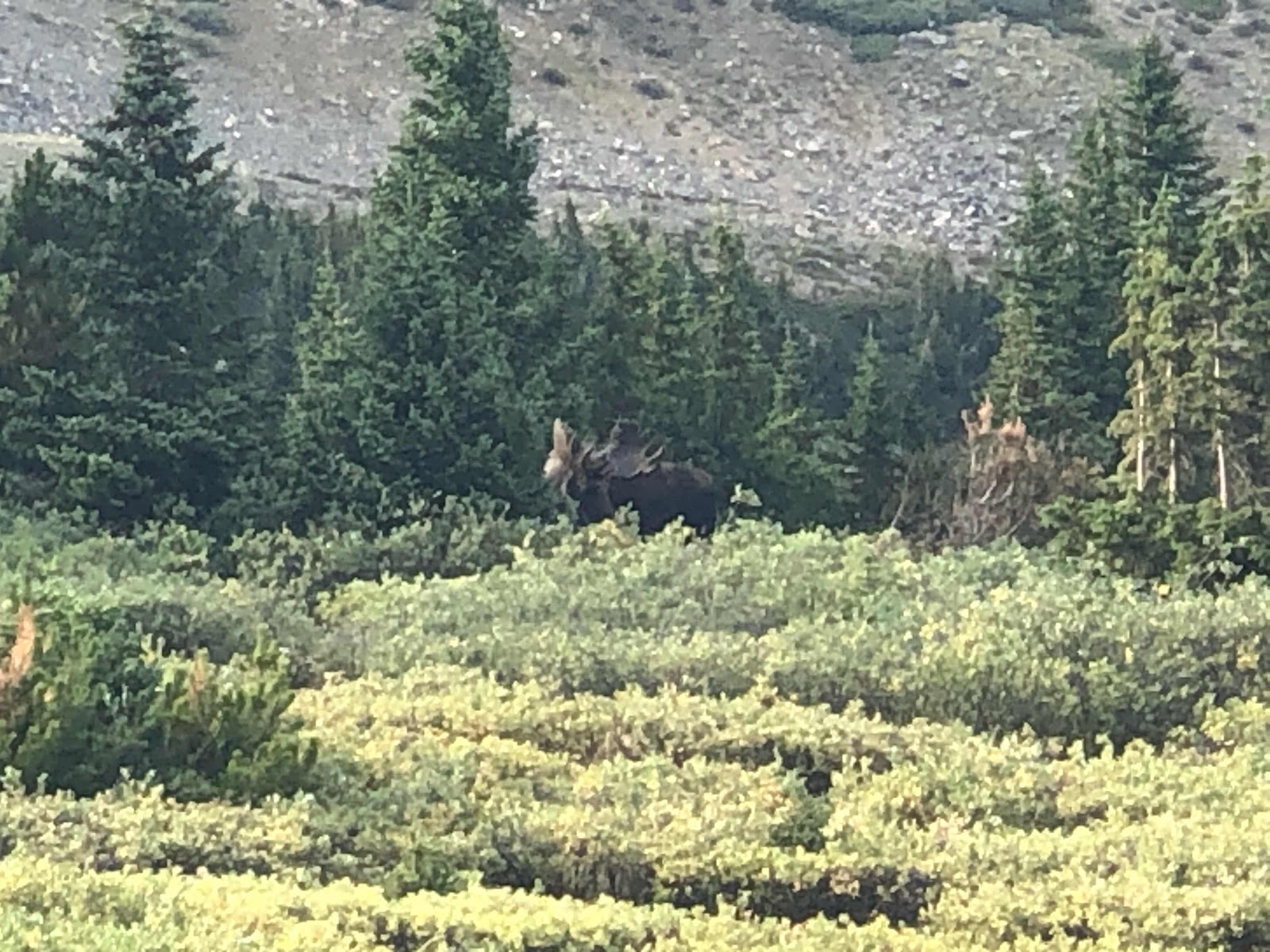 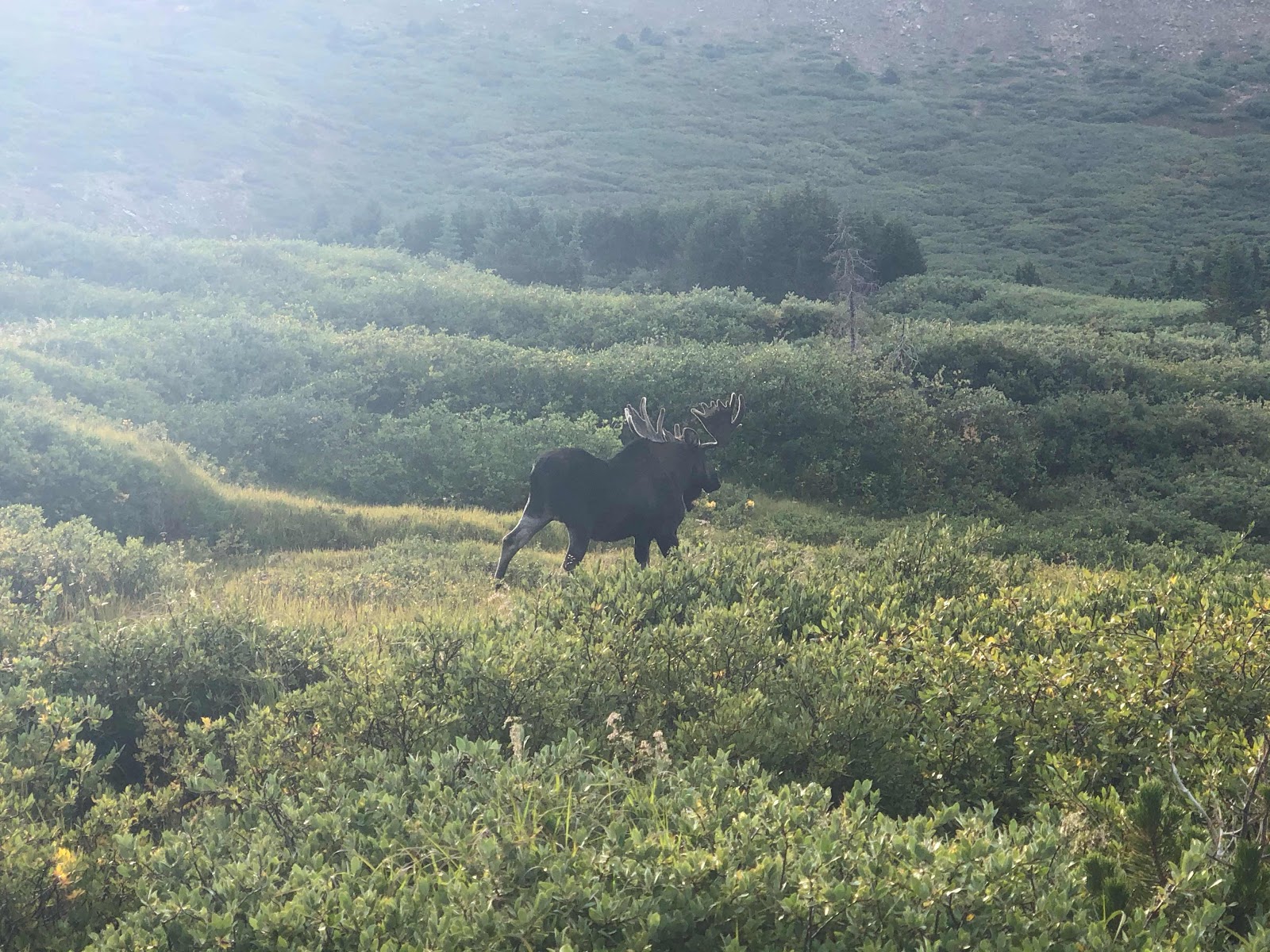 Moose #3
There was absolutely zero chance I wasn’t going to set up my tarp tonight. It had been raining off and on for the last two miles. I’m also camped just below 12,000ft and could use the extra little bit of warmth the tarp provides. I had just finished eating dinner when Flaming Hot came strolling into camp. I was beginning to get nervous that something had happened to him, but he was fine. I think we were camped within a quarter mile of each other last night and today he stayed about an hour behind me all day. Every person he came across today he asked if they had seen me. Apparently my solar panel on my pack makes me memorable. According to Flaming Hot everyone said I was moving along quickly. I think that is just because when I see other people I stand up straight and pick up the pace so that I look like a badass hiker. When no one is watching I’m back to swimming through molasses. 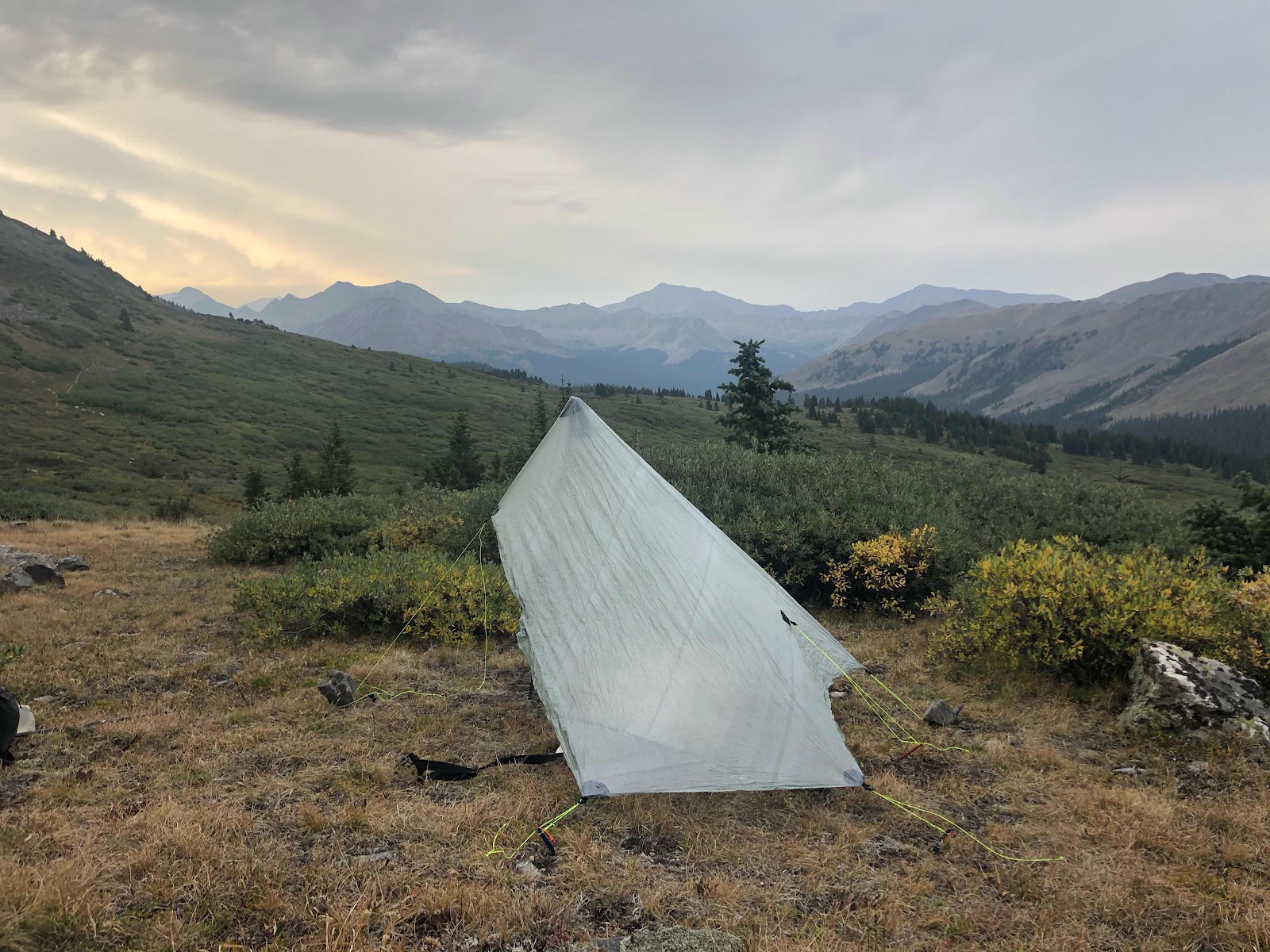