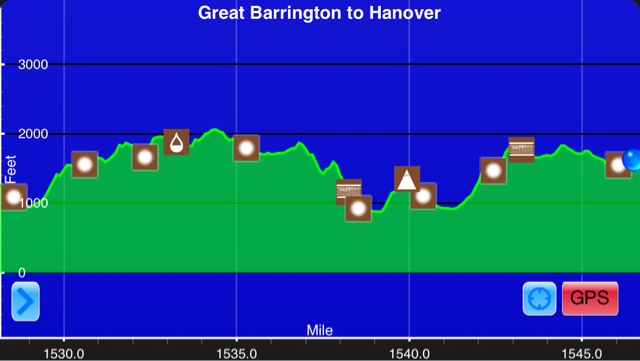 I've been saying for the last few days that I was going to slow down so I could start enjoying what Massachusetts has to offer. Well, today I had to speed up to enjoy myself. Upper Goose Pond Cabin, is a large red cabin that is maintained by the Appalachian Mountain Club(AMC) and National Park Service as a shelter and campsite for hikers in the area. The cabin has a bunkroom with room for fourteen. A volunteer caretaker is stationed there for the summer. The best part is it is located on Goose Island Pond. The lake has two parts, upper goose which is a protected area maintained by the National Park Service and lower goose, which is home to many residential houses. To be able to stay there, I had a long 21 mile day ahead of me.
I woke up to the sound of rain on my tarp at 4:30. When I woke up at 5:45 it had stopped raining. I ate a brownie for breakfast and washed it down with a Mt. Dew. My tarp was soaked from all of the rain, so I tried to pack it in a way that wouldn't get everything else wet in my pack. I was on the trail by 6:45. I was really dreading the first part of the day. It was downhill for two miles over slippery rocks. Now that I'm getting close to the end of my journey I find that I'm becoming extra cautious. I would hate to get hurt now and not be able to finish. I wasn't exactly reckless before, but now I treat every wet rock like its a block of ice. 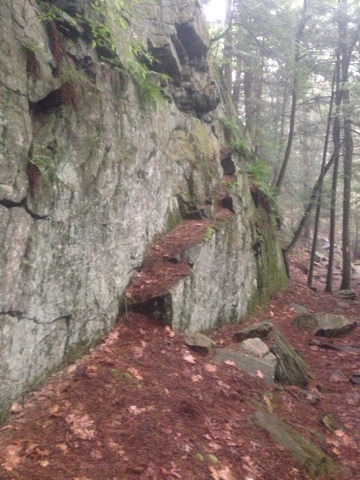 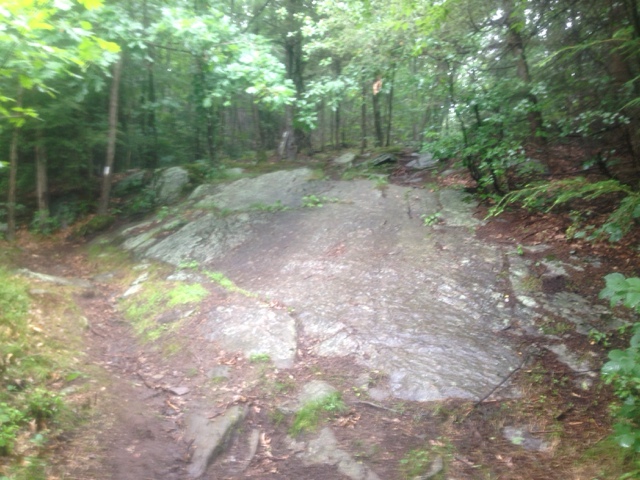 Slippery slab of rock
After carefully picking my way downhill for two miles, I had to climb my way back uphill. It's much easier to climb up slippery rocks than down them. The top of the climb had a ledge that should have given me a great view of Livermore Peak, Warner Mountain, and Mount Everett. 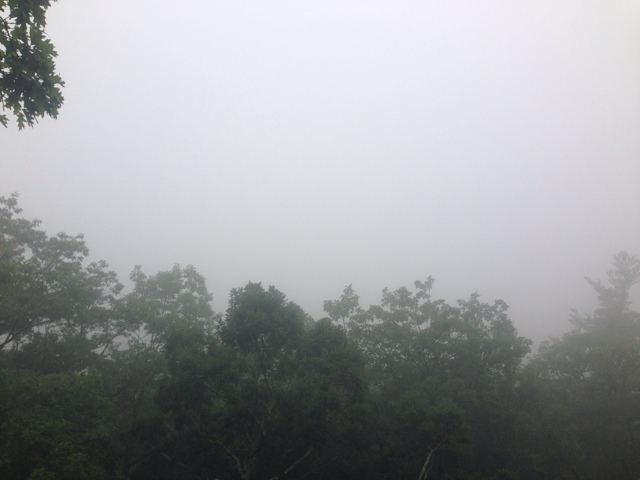 Notice how I said "should have"
I took a short break to enjoy the non-view before I had to go back downhill. I walked next to a beaver pond for a little while. I was hoping to see my first beaver, but the misty morning fouled any chance of that happening. 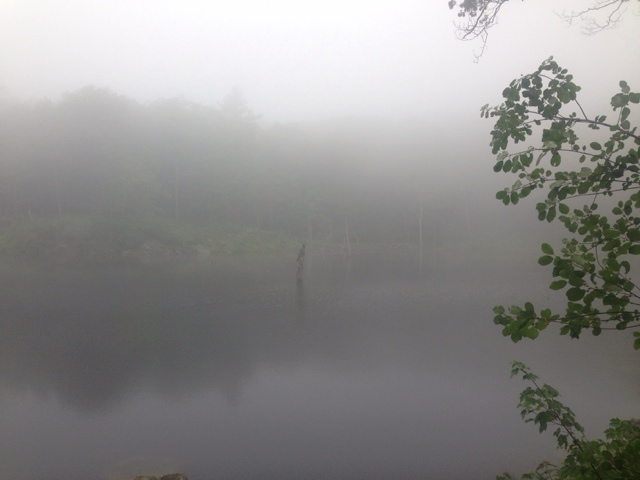 Beaver Pond
Just after leaving the fogged in beaver pond,  the predicted morning thunderstorm began. Just in time for me to go through a nice rocky section. You would think that with a steady down pour of rain the mosquitos would go away. If anything it just made them worse. These mosquitos in New England are crazy. Deet doesn't seem to deter them. Any time I stop, I'm instantly swarmed. It makes for pretty miserable hiking. They had me begging for mercy. I've never had so many mosquito bites in my whole life. I'm at my wits end with them.
Luckily, the rain didn't last very long. It stopped just in time for me to take my lunch break. Usually I find a nice spot with a view, but today I sat by the side of the road. The mosquitos aren't as bad outside of the woods. As I sat down to eat, there was a random cow wondering the road. He had escaped from a nearby farm. The entire scene was very surreal. 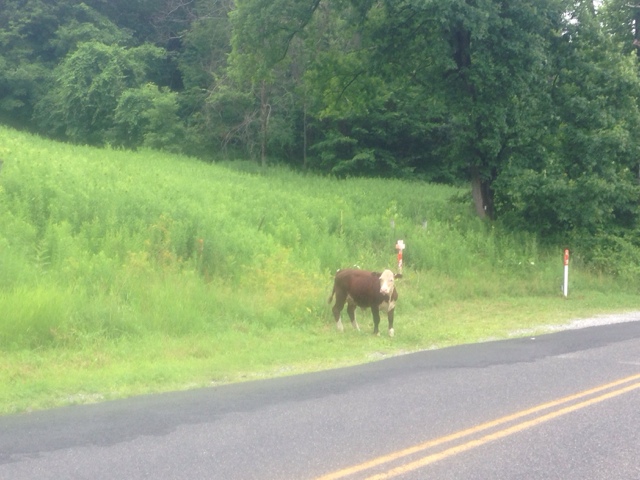 Escaped cow
I had been hearing about the next section of trail for a few days. There was an extended boardwalk I had to walk across and apparently one section had a swarm of angry bees lurking beneath. I was told the best thing to do was sprint across that section and hope for the best. Just as I was gearing myself up to run across, I saw a rattlesnake. Luckily it heard(felt) me coming and slithered away. I hit the bee section next, but they were nowhere in sight. I think the rain had caused them to hunker down. 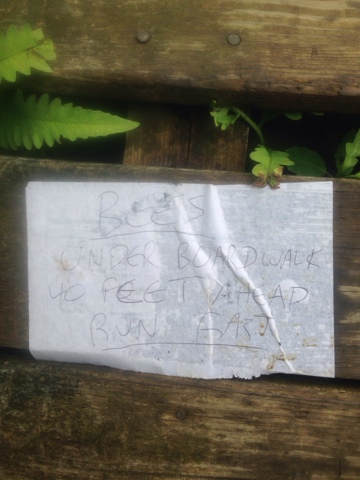 Positive product of the rain
By now I was nearing my stopping point, only seven miles to go. Over that seven miles I had two difficult uphills and a few minor ones. I put on some music and the time passed quickly. I eventually came to a historical marker that was my cue that I was close to my destination. 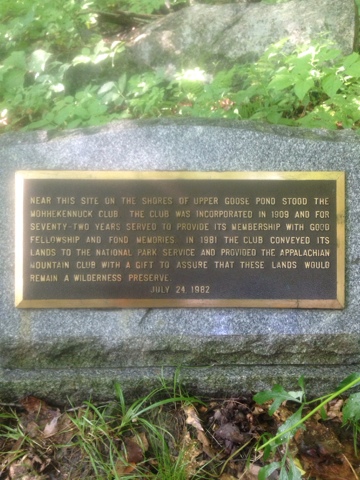 Historical Marker
The trail ran next to Upper Goose Pond for a little over a mile. I was super excited to make it to the cabin, but the muddy, rocky trail had me watching every step again. Eventually, I made it to the side trail that lead to the cabin. If a shelter is more than .25 off trail I'll usually skip it. Upper Goose Pond was half a mile off trail, but I was more than willing to hike that.
I arrived at the cabin at 5:00. There were already several hikers there, but I only recognized, Rocky Mountain High. I snagged a spot in the bunkhouse and then walked down to the lake. Just as I got down there a few locals cruised by in their boat. They swung by the dock to chat with me. They were very nice and even gave me a few beers. 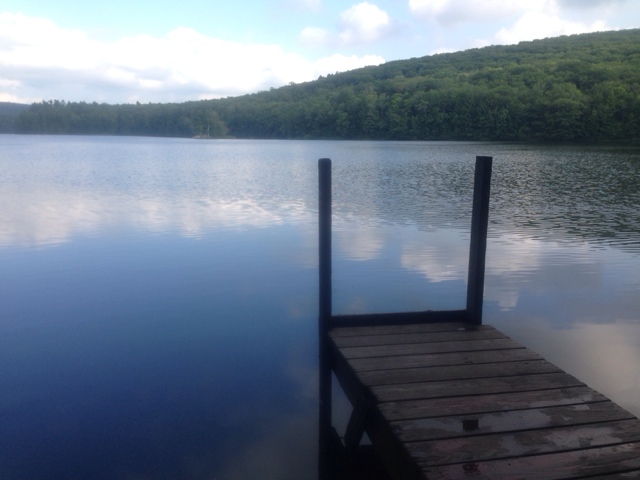 Life is good
I took a hobo shower and drank one of the beers. I saved the other for Rocky Mountain High(mainly so I didn't have to pack out both cans). I went back up to the cabin and cooked dinner, then went down to the beach to eat. 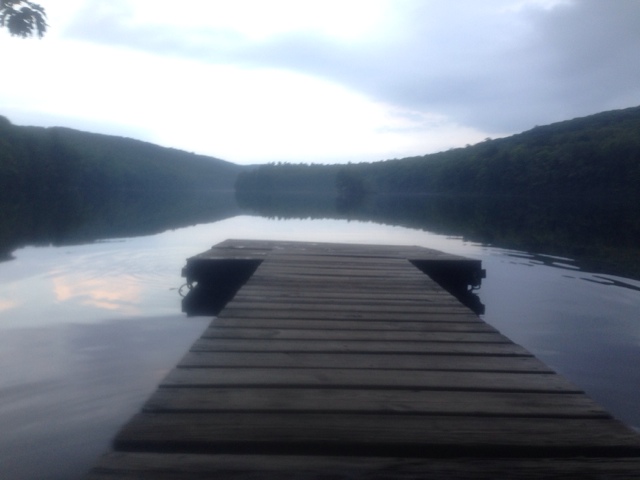 View from the beach
The caretakers let us take out the canoe for sunset. It was the perfect end to the day, except for the mosquitos. 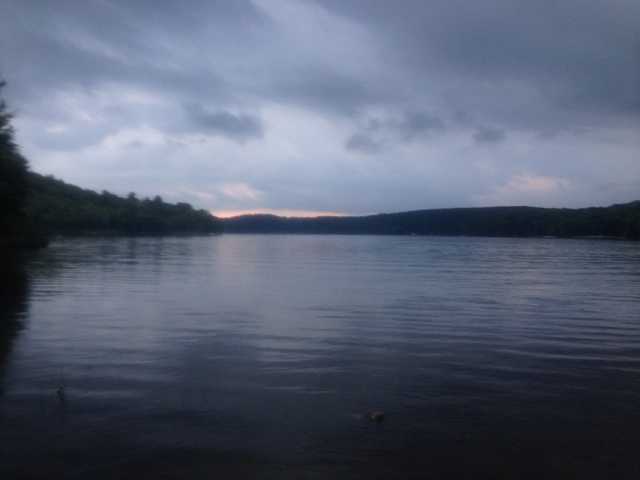 Sunset over Lower Goose Pond
I settled into my bunk to write my blog, but fell asleep before I finished the first paragraph. I woke up to the smell of fresh brewed coffee and homemade pancakes. This shelter was more of a hiker hostel than a shelter along the AT.
"I'm always astonished by a forest. It makes me realise that the fantasy of nature is much larger than my own fantasy. I still have things to learn." -Gunter Grass
Posted by Yoda at 6:15 AM