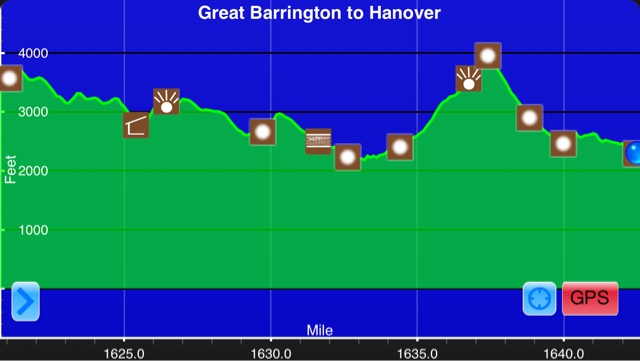 The last few days I was hitting the brakes, but today was all about pushing the pedal to the metal. I am absolutely exhausted! I think today was the hardest I've hiked this entire trip. We covered 21 miles in nine hours. That includes a half hour lunch break and six 5-10 minute snack breaks. I figure we averaged 2.8 mph all day long. I usually average 2.25 mph. The trail was super muddy and we had a few difficult climbs.
I was hoping to see the sunrise from on top of the fire tower this morning, but it was raining when I got up. I didn't even bother getting out of my hammock to see if I could get a view. I knew all I would see was a wall of white. I went back to bed and ended up sleeping until seven. By then the rain had stopped, so I began to pack my things. I chatted with Stink Jacket for a few minutes before heading out.
I started out really slow. I desperately need new insoles for my shoes. My feet are in constant pain. I tried everything to take my mind off of the pain, but nothing worked. It didn't take long for, Pacman and Stink Jacket to catch up to me. They hike much faster than me, so I let them pass by. I thought it would be a good distraction to try and keep up with them for a little while so I picked up my pace. We crushed out the first four miles very quickly. We stopped briefly to filter water and catch our breath. I hoped I could keep up with them for the next four miles. I was trying to get my early morning miles done as quick as I could because I've been slowing down so much in the afternoon.
We ended up hiking the first nine miles together in under four hours. We took a nice long lunch break at Story Spring Shelter. At that point I was pretty beat. I told them I couldn't keep up with them any longer and I'd meet up with them at the end of the day. Stink Jacket wasn't having it though. He said they usually slow down after lunch too. I decided to stick with them for a few more miles since we were having so much fun. 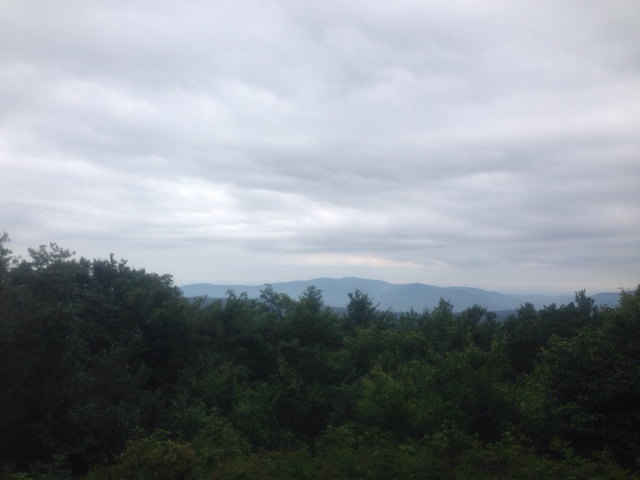 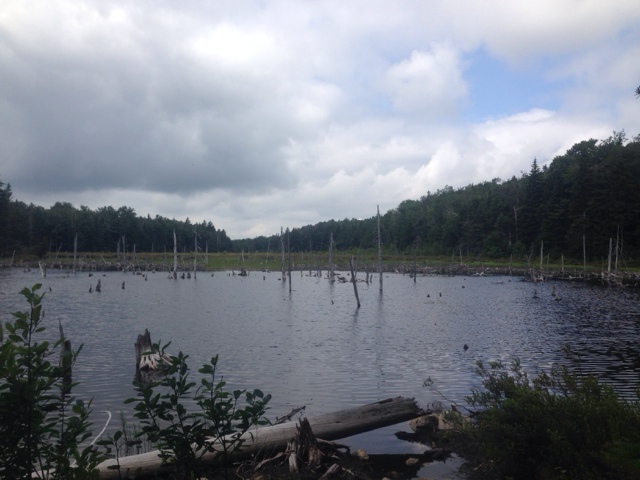 Beaver Pond
Their idea of slowing down differs immensely from mine. I think they actually picked up the pace. I'm a pretty fast hiker going uphill, but I struggle to keep the pace up over slick rocks and mud puddles. They fly right over those. Of the 21 miles hiked today, at least 10 miles was through the mud and over slick rocks. 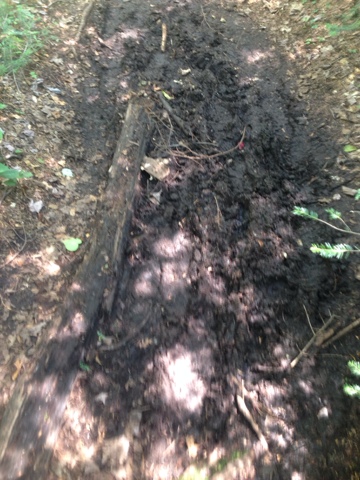 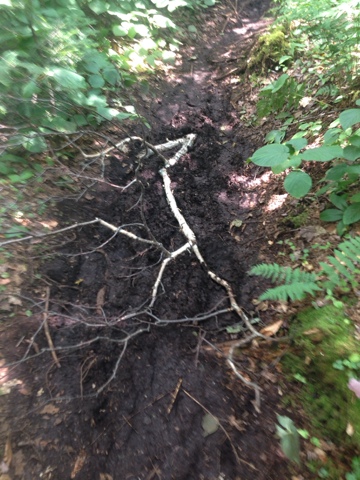 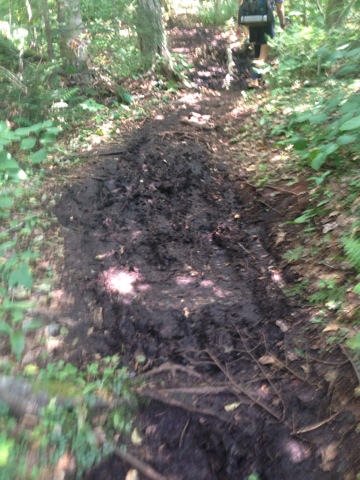 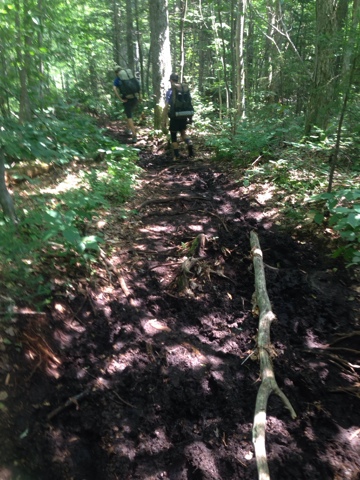 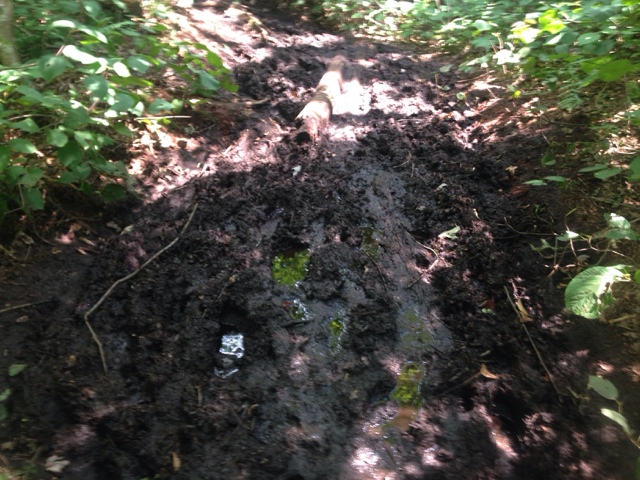 Get the point?
I somehow managed not to fall down today, but I had a lot of close calls. I planned on going my own way just before the big climb of the day, but once again Stink Jacket convinced me to stick with them. The climb up Stratton Mountain was a beast. We gained 1,800 feet of elevation by climbing uphill for 4 miles. I figured along the way they would leave me way behind, but somehow I managed to keep up. I had it in my head that it would take us 2.5 hours, but we did it in just under 1.5. I can't believe how hard we crushed it.
Stratton Mountain is the reason why there is an Appalachian Trail. The creator of the trail, Benton Mackaye, was so inspired by the views on the summit that he decided to create a continuos footpath along the appalachian mountain range. Today, however, the summit is covered by huge balsam fir trees. You can only see the view from atop a fire tower. 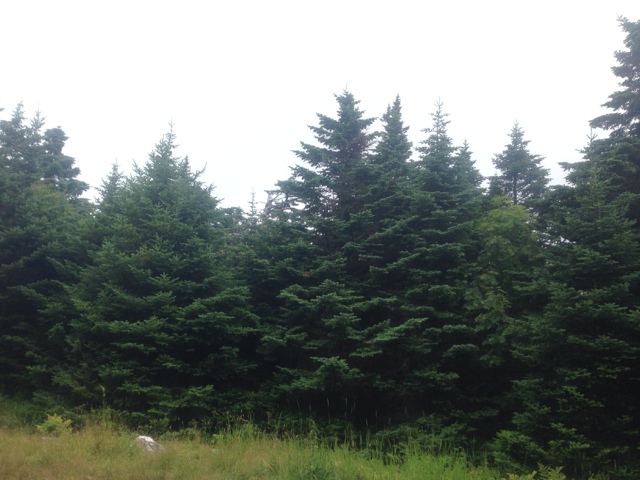 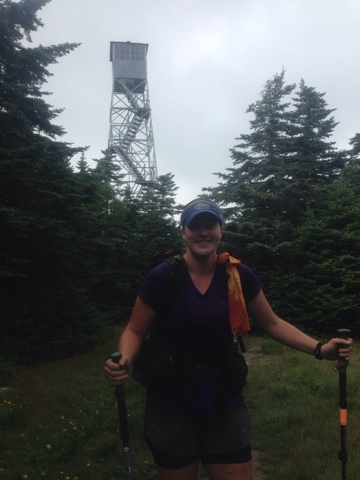 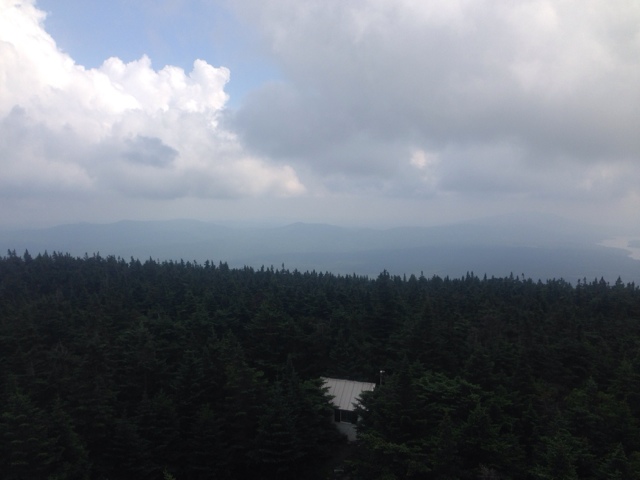 Really hazy out so not much of a view :-(
Stratton pond is visable here
Sitting on top of the summit was a caretakers cabin. The caretaker, Jean, came out to say hello. Her and her husband have been there since 1967. They manned the fire tower as lookouts until a few years ago when VT switched to aerial reconnaissance. She was a wealth of knowledge and I enjoyed talking to her. 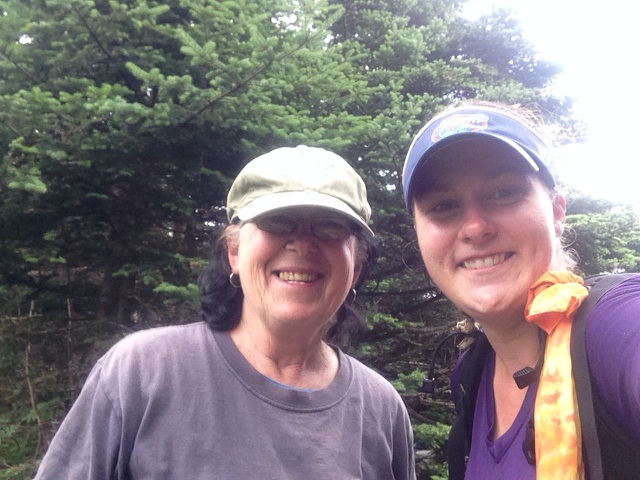 Jean
We didn't hang around the summit for very long. I was soaking wet from my sprint up the mountain and the wind was blowing pretty hard. I was very chilled and needed to start hiking again to warm up. The next shelter was only three miles away, but we weren't staying there because they charge $5 to stay. I camp for free everywhere else on this trail and I'm not about to pay $5 now. I understand the logic behind imposing an overnight fee, but I think thru-hikers should be exempt. Supposedly they charge the fee because of over usage in a few areas in Vermont. It was a shame because the tenting area looked awesome. 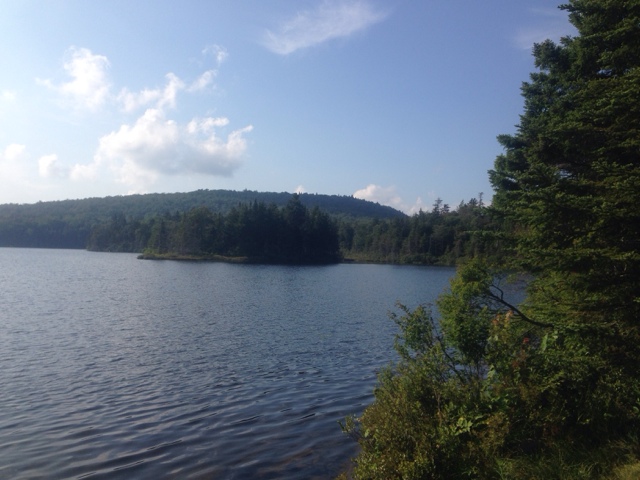 View of Stratton Pond from the tenting area
Since we refused to pay money to stay there we had to hike another two miles. By this point I was utterly exhausted and the final few miles felt like ten miles. I was so tired that I didn't even realize we had crossed a major milestone until later in the evening. We reached the 3/4 point of the trail. Just one quarter remains!!! I can't believe there wasn't a sign to mark the occasion.
Tent spots are very limited here. Pacman, Stink Jacket, and I are setup super close to one another. It's what Cherokee, Airlock, and I used to call Camp Cozy(or snuggly).
Tomorrow will be another town day. I'm hoping to get my hiking pole fixed, get new insoles, and a new pair of socks. It will be a very busy town stop.
"Never blame anyone in your life.
Good people give you happiness. Bad people give you experience. Worst people give you a lesson and the best people give you memories."
- couldn't reliably contribute this quote to anybody so I have to do the dreaded "unknown"
Posted by Yoda at 8:04 PM