May 15, 2016
Idyllwild, CA 0 Miles
It has been an über successful zero day. As usual I had planned to sleep in, but my body is on trail time. I was up at 5:15, but I stayed in bed until almost 6:30. Outro and I waited a respectable amount of time before venturing out for breakfast.  We decided on a local bakers that everyone was raving about. Outro got a cinnamon bun the size of a dinner plate. I couldn't stomach the thought of a sweet breakfast. While in the trail all I eat for breakfast is sweet stuff. After much deliberation I decided on another breakfast burrito. So far that has been my go to town food choice. Today's was delicious it had bacon, chorizo, hash browns, 3 kinds of cheese, peppers, onions, and fresh locally sourced eggs. I was so excited to eat it I forgot to take a picture. We hung out at the bakery for a good part of the morning catching up on our blogs and other things requiring wifi service.
Eventually we went back to the room to checkout and retrieve our packs. Then it was back to the outfitters to peruse their selection once again. I retried on some sun gloves, but I still can't make a decision. So far my hands haven't really gotten burnt, they just feel like they are burning everyday. I tried on some new shoes in case I need to buy something different farther down the trail. I am absolutely in love with the Altra brand of shoes and I will probably purchase a pair when my Solomons need replacing. I like the Solomons, but as my feet continue to swell and widen I don't know if they will continue to work for me. It is also nice to have a plan B.
Just as I was leaving the outfitters I ran into more AT friends!!! 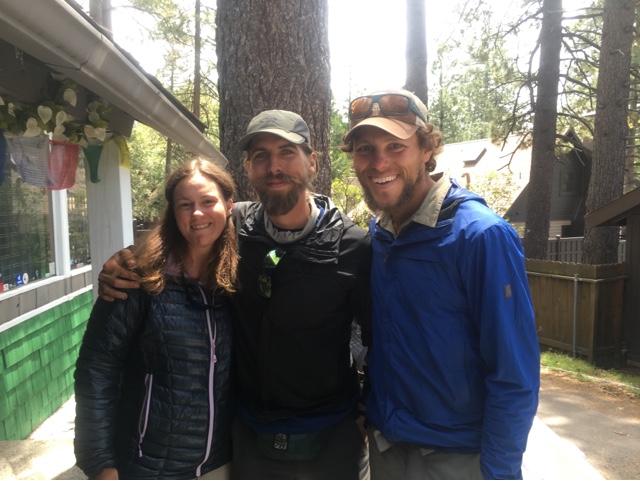 Yoda, Cap, and Spice: also known as The Packing it out crew. Check out their blog at packingout.blogspot.com
Last year they collected over 1,100 lbs of trash from the AT. This year they are continuing to pack out trash from the trail. It was great to see them and to catch up.
After my nonproductive trip to the outfitters it was time to check into our new lodgings. We found a cabin in the center of town for $100 and we are splitting it 6 ways. Hawkeye, Evac, Space Man, Warren, Outro, and I have had a great day hanging out. Everybody got their individual town chores accomplished and were in and out of the cabin all day. I helped Evac do a pack shakedown and we managed to get at least a pound out of her pack. I went back to the pizza place and got a small pizza to have for dinner and breakfast. I tried to go see the new Captain America movie, but the times posted were wrong. Instead I spent a few hours catching up on Game of Thrones. Thanks Kyle and Alie for letting me use your account.
We spent an absurd amount of time planning out the next few days. The major concern is the next fire closure. There are way too many rumors about this closure. It is a 50 mile closure with no alternate. The only way to get around it is to pay for a shuttle service or take a bus. The official stance on the trail is it is closed. The rumors say we can hike through with zero chance of getting a fine, but if they are wrong it is a $2,500 ticket. I have decided that since it is officially closed, I will not attempt to hike it. They have it closed for a reason and I'm sure it is a good one.
Zero days always go by so fast and are never as relaxing as I had hoped for. Maybe one of these days I'll learn how to be more efficient and have more time to relax. 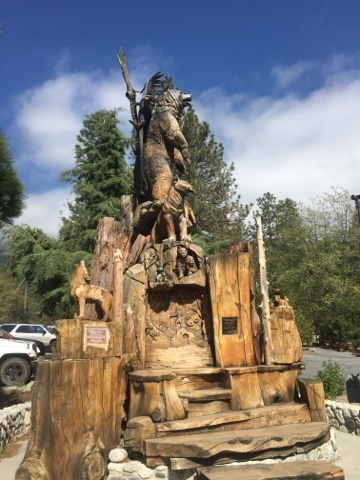 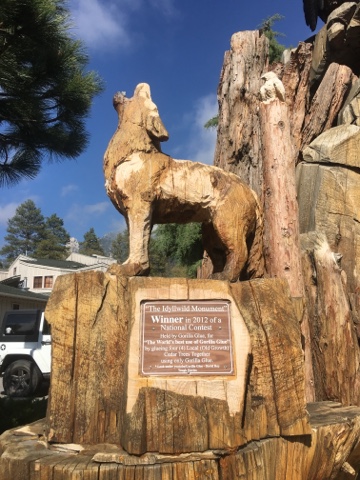