Day 15- Super Summit With A Side Of Sleet And Snow 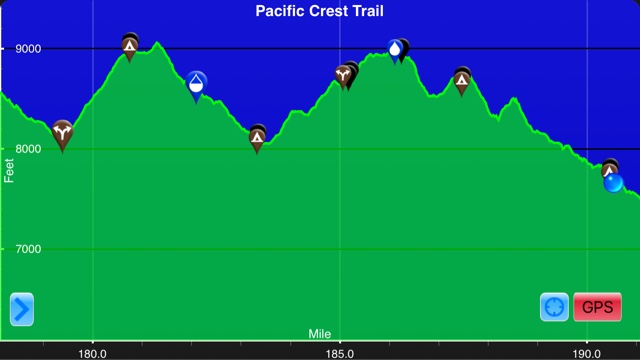 Oh man, what a day. This morning started off very cold. It was in the thirties when I woke up. Since nobody else was stirring in their sleeping bags I decided to go back to sleep. Finally around six we all got up. We had a beautiful view from above the clouds as we were breaking camp. 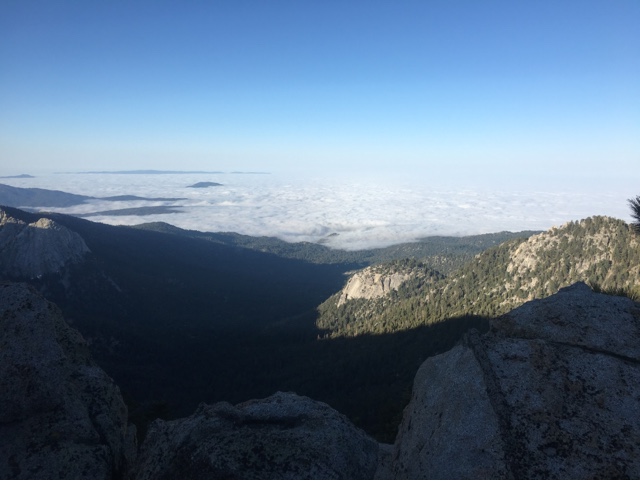 View from 1,800' below San Jacinto
The climb up to San Jacinto peak was just as brutal as I imagined. The first part of the climb didn't have very many switchbacks. The switchbacks there were had a lot of rocks and debris along the trail. It made for slow travel. Plus the higher we climbed the less oxygen we had at our disposal. I had to stop frequently to catch my breath. Usually my legs wear out before my lungs. I did spot 3 young doe on my way up. That is the biggest animal I've seen since we entered the desert. Today's terrain was made up of forest and alpine zones. It was very pretty to walk through and the temperature remained cool. Even on the climb up to the peak I never got overheated. 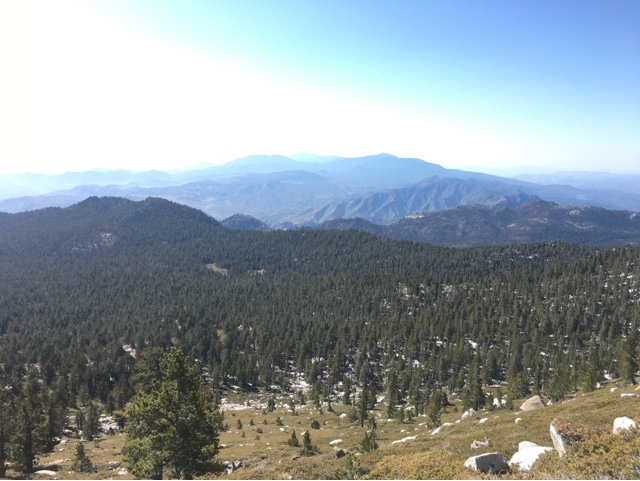 Different from the usual desert landscape
The mountain still has lots of snow on it. I was surprised to walk through it on the trail. Entire sides of the mountain were still covered in snow. It was a tiny taste of things to come in the Sierra. 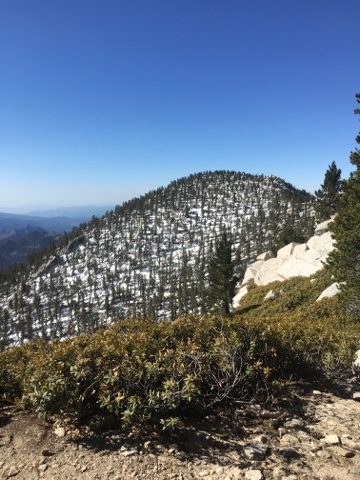 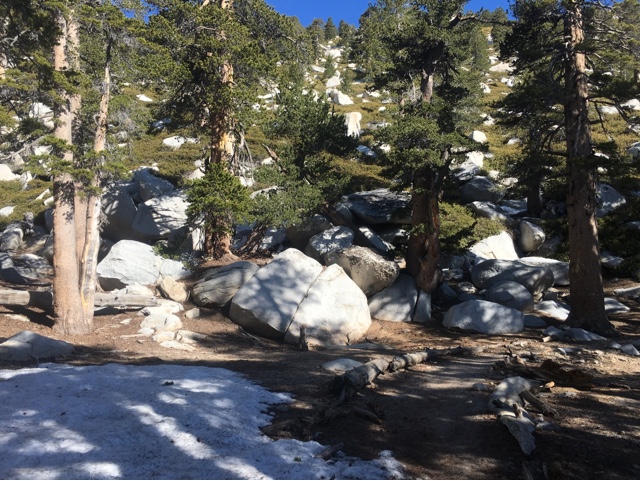 Walking through snow
Once we made it up to the summit we were greeted by a 1930's emergency cabin. I love the old 1930's era CCC buildings. 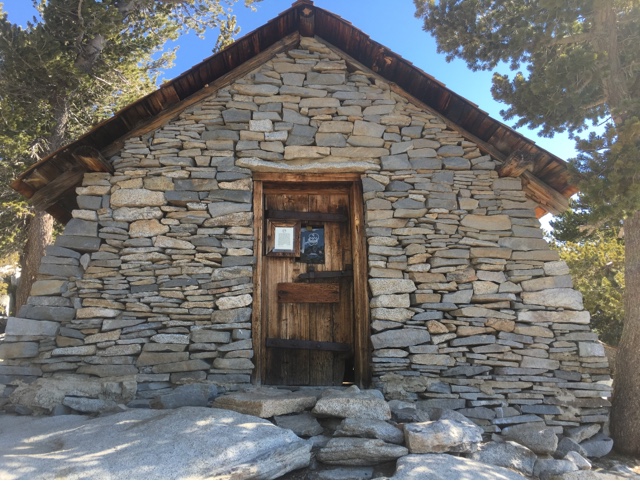 Emergency cabin
The official summit was still a few hundred feet above this point. We left our packs at the hut and made our way up. The view was absolutely stunning. You could see 360 degrees from there. We had a view down to the Palm Springs desert. It was pretty neat. You could just barely make out a large windmill farm. 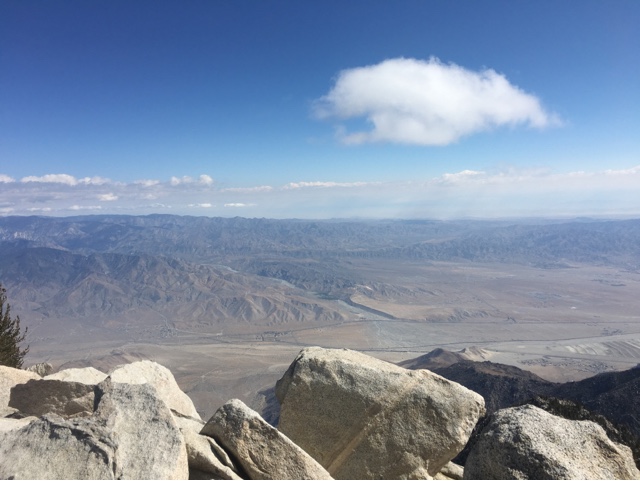 Desert Floor
We took turns taking pictures next to the summit sign, some were more creative than others. Outro jumped rope, I did my typical pose, and a few people chose to get naked. 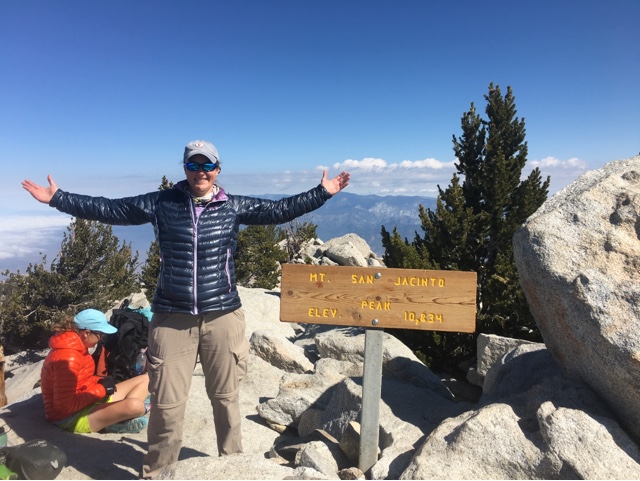 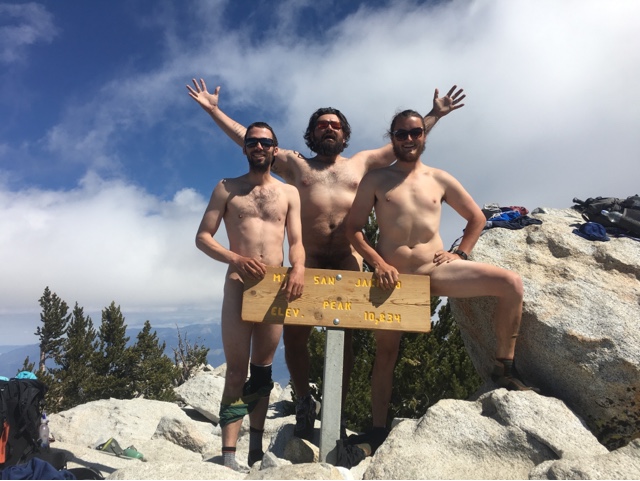 Hiker trash behavior
We probably spent a little too much time up there, but it was well worth it. This is one of the highest peaks I have ever climbed, 10,834 feet. I can't wait to hit the really big ones in the Sierra. For the next 26 miles we will rapidly drop down to the desert floor. As we began to wind our way off of the mountain we could see the bad weather rolling in. 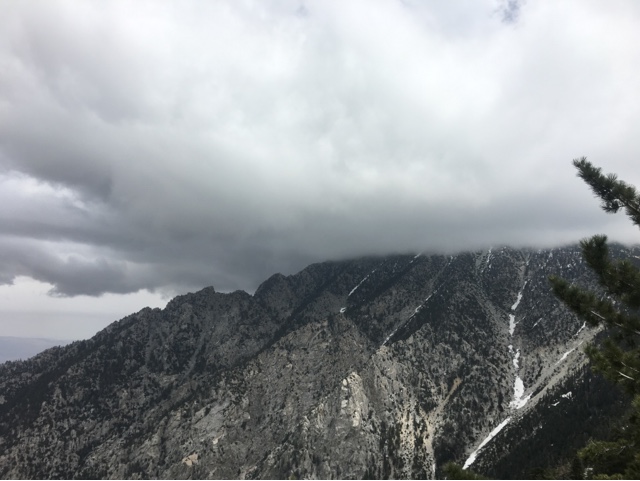 Ominous cloud
We barely made it to the campsite before the rain/sleet/snow began. We debated on whether we should seek shelter, setup our tents, or push on through the rain. In the end we decided to take shelter under s rock overhang to wait it out. We still wanted to get in another 4-5 miles for the day. 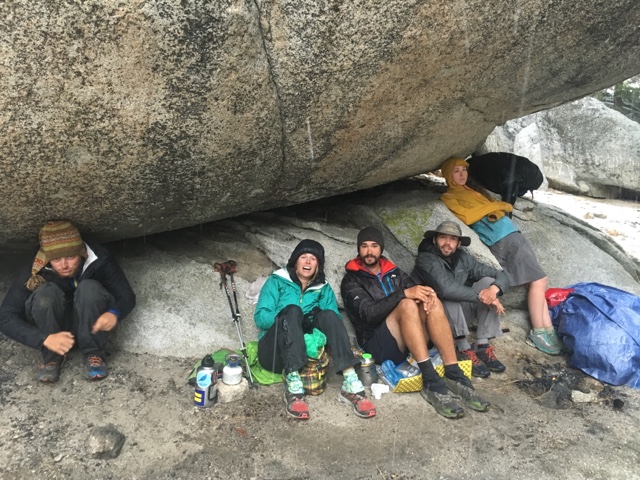 Should have set up our tents
After about 30 minutes the rain stopped and we decided to setup camp. This campground has a fire ring so we can legally have a campfire here. We quickly setup and as we were collecting firewood it began to sleet. For some reason instead of getting into our warm and dry tents, we went back to the rock overhang. We quickly became trapped there as it began to really dump hail/freezing rain/snow. It was crazy. 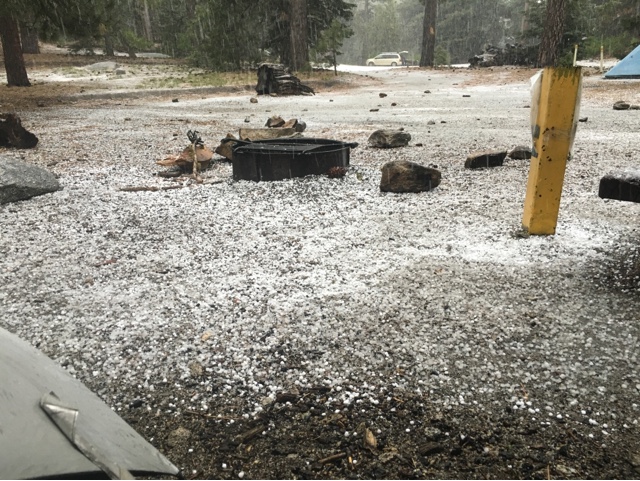 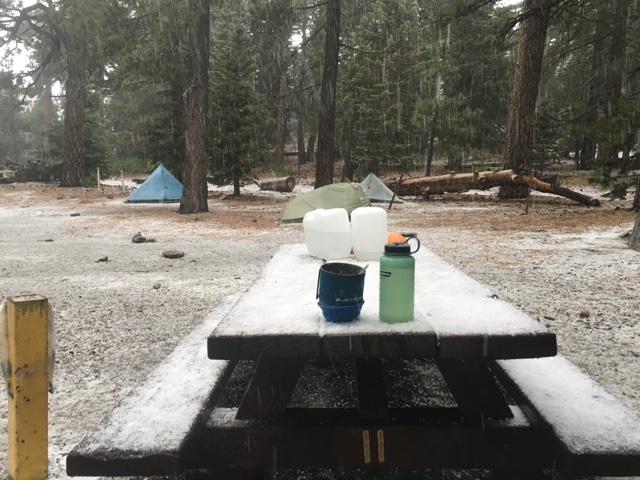 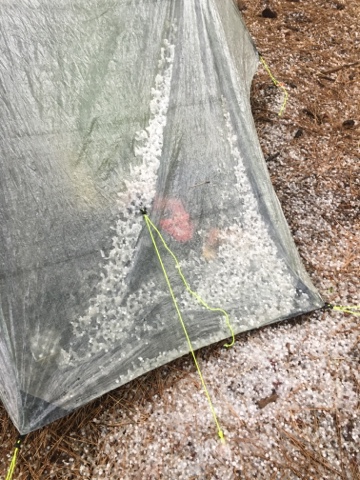 Snow and hail
When it finally letup I retired to my tent. I was absolutely freezing and shivering uncontrollably. It took a long time in my sleeping bag before I warmed up. I cooked dinner from inside my tent. Just before dark it stopped and the sun came out. The boys got the fire started and we all congregated around it for warmth. In the next 30 about 10-15 wet miserable hikers paraded in. They had all been caught on the exposed ridge and had to deal with lightning, thunder, heavy winds, and freezing sleet/snow. I guess it could have been worse for us.
Tomorrow we have 20 miles of downhill to hike. My knees are already screaming just thinking about it.
"The truer you are to yourself, the greater your gifts will manifest themselves."
Tiffany L. Jackson
Posted by Yoda at 10:29 AM