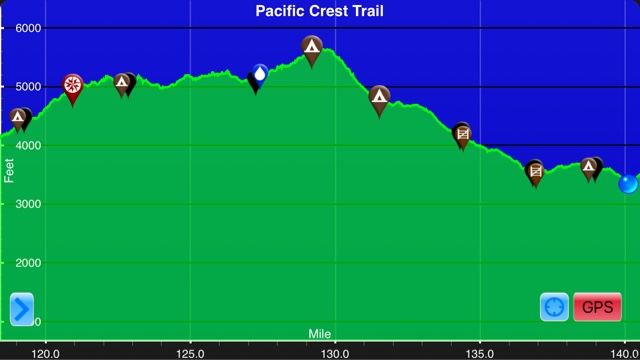 For some reason I found everything extremely amusing today. The smallest, most ordinary things had me chuckling. I woke up a little later than normal, but I
still managed to be on the trail by 6. I'm beginning to get a system down for packing up in the morning. I've definitely gotten more efficient. The nights are starting to warm up, it wasn't as chilly this morning. As I was walking away from camp I looked back to check that I hadn't forgotten anything and I was greeted with a great sunrise view. 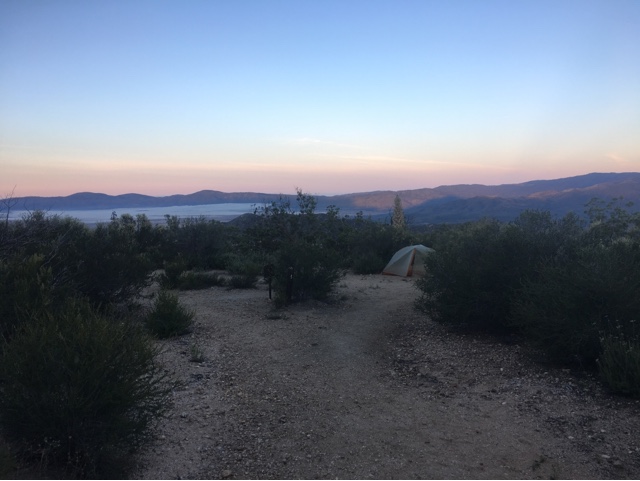 Early morning in S. Cali
I found it funny that I was so intent on packing up that I almost missed it. I was the first person out on the trail this morning. Nobody else from my campsite even stirred as I was packing up, which is surprising because all of my gear is extra crinkly sounding. Trust me when I say it is next to impossible to sleep through. I spent the first 3 hours of the morning climbing up hill. Sometimes the pct can be frustrating on how long it takes to get anywhere. Over 10 miles I gained 1,500 feet of elevation. It's like being on an extra slow elevator. I look at the same few mountains from different angles while I do switchback after switchback. 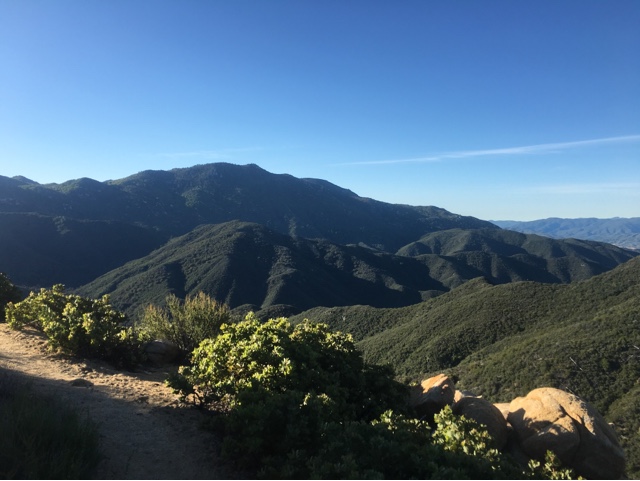 Who knew the desert could be so green
My destination for the morning was a water source listed simply as "water tank". I was pleasantly surprised upon arrival to learn that it was so much more. 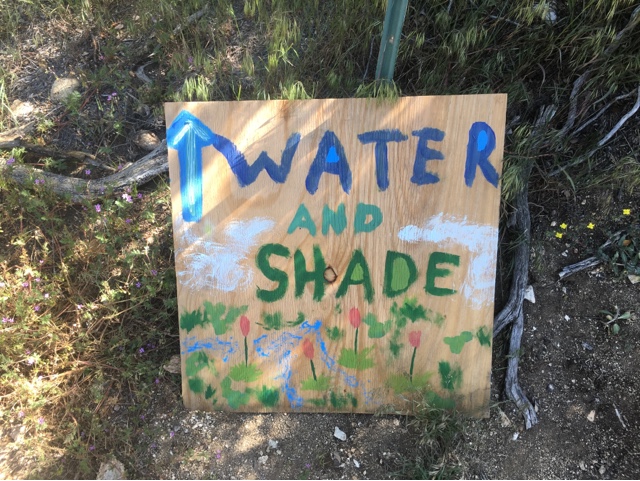 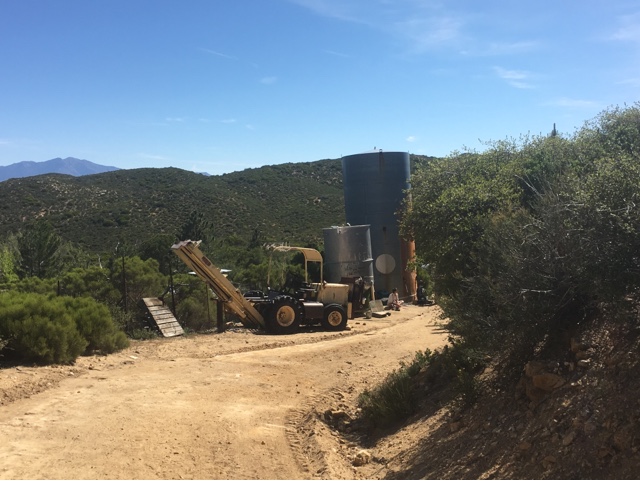 Water Tank
Mike is a caretaker for a local ranch. He provides shade, water, soda, beer, and sometime a warm meal. Mike wasn't there today, but Tom was. He cooked us chorizo breakfast burritos. I washed mine down with an ice cold Mt. Dew. I had only planned on topping off my water bottle, but I ended up losing an hour of early morning hiking. It was well worth it. The burrito was delicious. 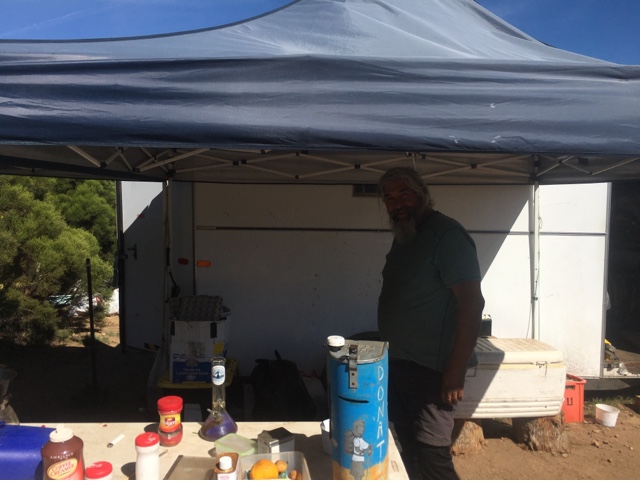 This is Tom. Anybody notice the giant bong sitting on the table?
Apparently coffee, tea, soda, burritos, and marijuana was on the menu today. I left a $5 donation, but passed on the giant bong. I did get a good laugh out of the absurdity of the situation. Fueled on by pure sugary Mt. Dew the next few miles passed by quickly. I stopped briefly to check out a cool boulder field. It reminded me of a scene from the old Star Trek series with William Shatner. 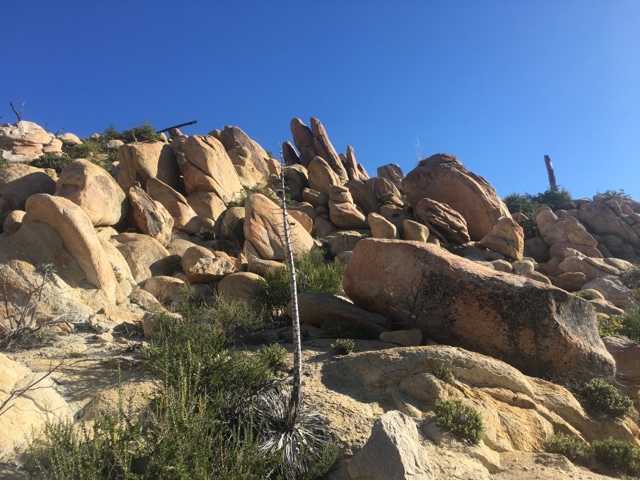 Not sure why I got the Star Trek vibe from this
The rest of the day passed slowly. I was really dragging butt this afternoon. It was hot as usual, but I seemed to struggle more than usual. I also drank double the amount of water than I usually drink. I stopped to take a snack break around 2 and actually thought about calling it a day and setting up camp. Then the most amazing thing ever happened. I found these in my food bag... 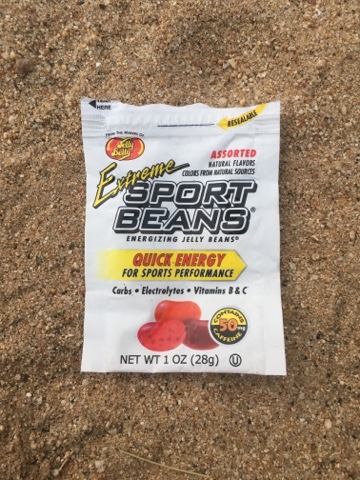 My new favorite snack item
After eating these I felt like I chugged a redbull, rolled around in amphetamines, and took a huge rail of pure uncut Columbian cocaine. I was like Wile Coyote with an Acme rocket strapped to my back. I picked up my pack and flew down the trail. I hiked 4 miles in 55 min!!!! Then I crashed spectacularly back down to earth. The next two hours of the day I plodded slowly down the trail wondering how I could get my next fix of Extreme Jelly Beans. If anybody has a hookup on these let me know. I am hooked for life. I might just live off of these for the entire hike. (I planned out this entire paragraph while plodding along. I told you I found everything amusing today) 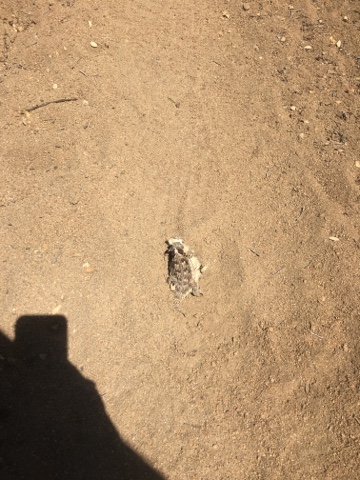 2 large Reptiles "wrestling"
It was just a funny kind of day. While I'm laying in my tent writing this there is some  kind of large insect buzzing my tent, but unfortunately for these large flying insects there are also bats buzzing my tent. The bats are feasting and I'm laying awake marveling at the animal kingdom. I think the heat might be getting to me. 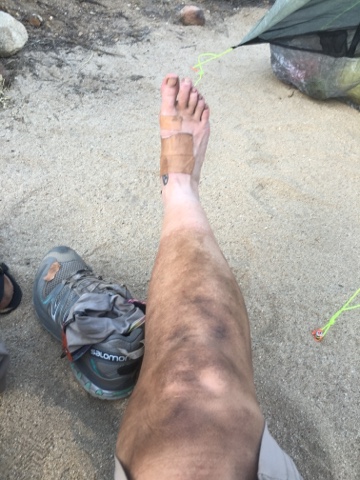 Or maybe it is how filthy I am at the end of the day. Just keep in mind that I hike in long pants. How is this even possible!?!
"I still have the problem of thinking I'm in control of things I'm not in control of. No matter what you thought your plans were, that's not how things are going to work out, and that's the only way you can really live successfully.  With karma too, it's like, 'what have I done to deserve this?' That's always the wrong question. It doesn't matter. The only right question is 'What do I do now?' That's it."
- Jason Isbell
Posted by Yoda at 11:56 AM