It was freaking cold last night! When I finally woke up this morning my sleeping bag was covered in frost. Everything was really wet. On the brightside it was totally worth cowboy camping. The sky was clear and I saw a bunch of meteors. I didn’t dilly dally around once I got up. I threw everything into my pack and started hiking. All of my thoughts were on getting warmed up. Piñata and Sour Straws left when I did. Enigma left about twenty minutes before us. We started off hiking on dirt roads through cattle country. This continued for close to eight miles. Eventually it warmed up enough to start taking layers off. At some point during the morning we talk about what our mileage goal for the day is going to be, today was no different. Everyone had looked at the elevation profile and we all thought a forty mile day would be possible. We knew it would be a long day, but it didn’t look too difficult. Almost immediately we realized that we had gotten off trail. We had missed a turn on the road and ended up hiking an extra half a mile. We took a different road to meet back up with the trail. 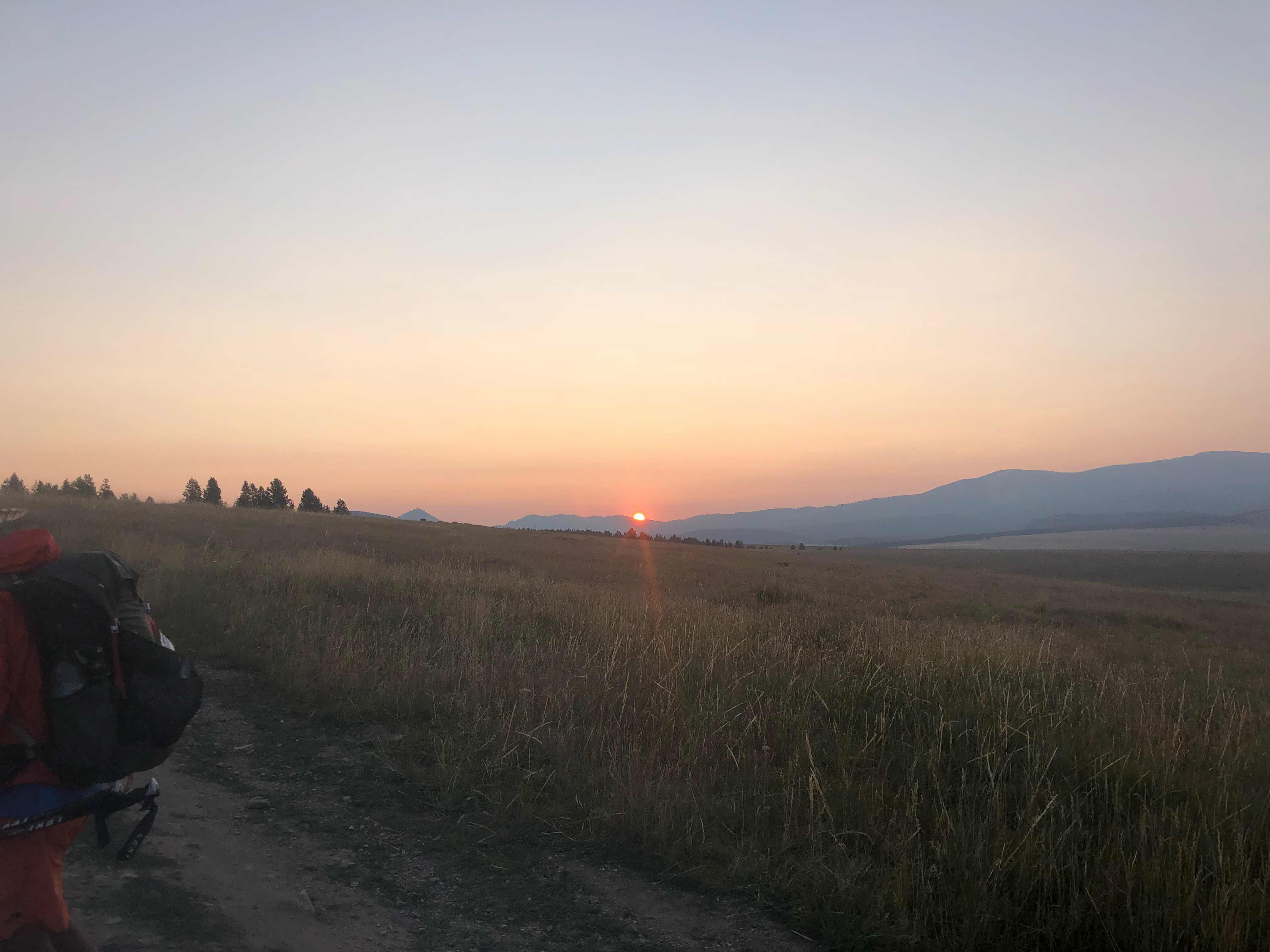 Sunrise
We met back up with Enigma at a water source. When we told him that we planned on going forty miles today, he said that was his plan as well. We took a little bit of a longer break getting water than we usually do. The trail became a little more difficult after the water source. We had a relatively small climb, but after yesterday we were all pretty beat. Nobody got much sleep last night due to the cold. We were also up late watching the meteor shower and we hiked an hour later than normal. The climb was much more difficult than it appeared on paper. It was really getting hot out and we walked through loose sand. Piñata started feeling shaky due to lack of calories so him and Straws stopped to eat. By the time I finished the climb I was overheated and also feeling shaky from lack of food. I stopped in a nice shady spot to cool down and to eat something. My legs were much more tired than I thought from the ups and downs of the day before. I quickly came to the conclusion that I couldn’t do a forty today. I looked at my map and decided a 32 mile day was probably all I could muster. When Straws and Piñata caught up the first thing out of their mouths was that they couldn’t do a forty either. Enigma joined us in the shade a little bit later. The first thing he said was that he couldn’t do a fort either. We all had a laugh about how quickly the plan had changed. Today was much more difficult than any of us had expected. We trudged through the remainder of the morning. 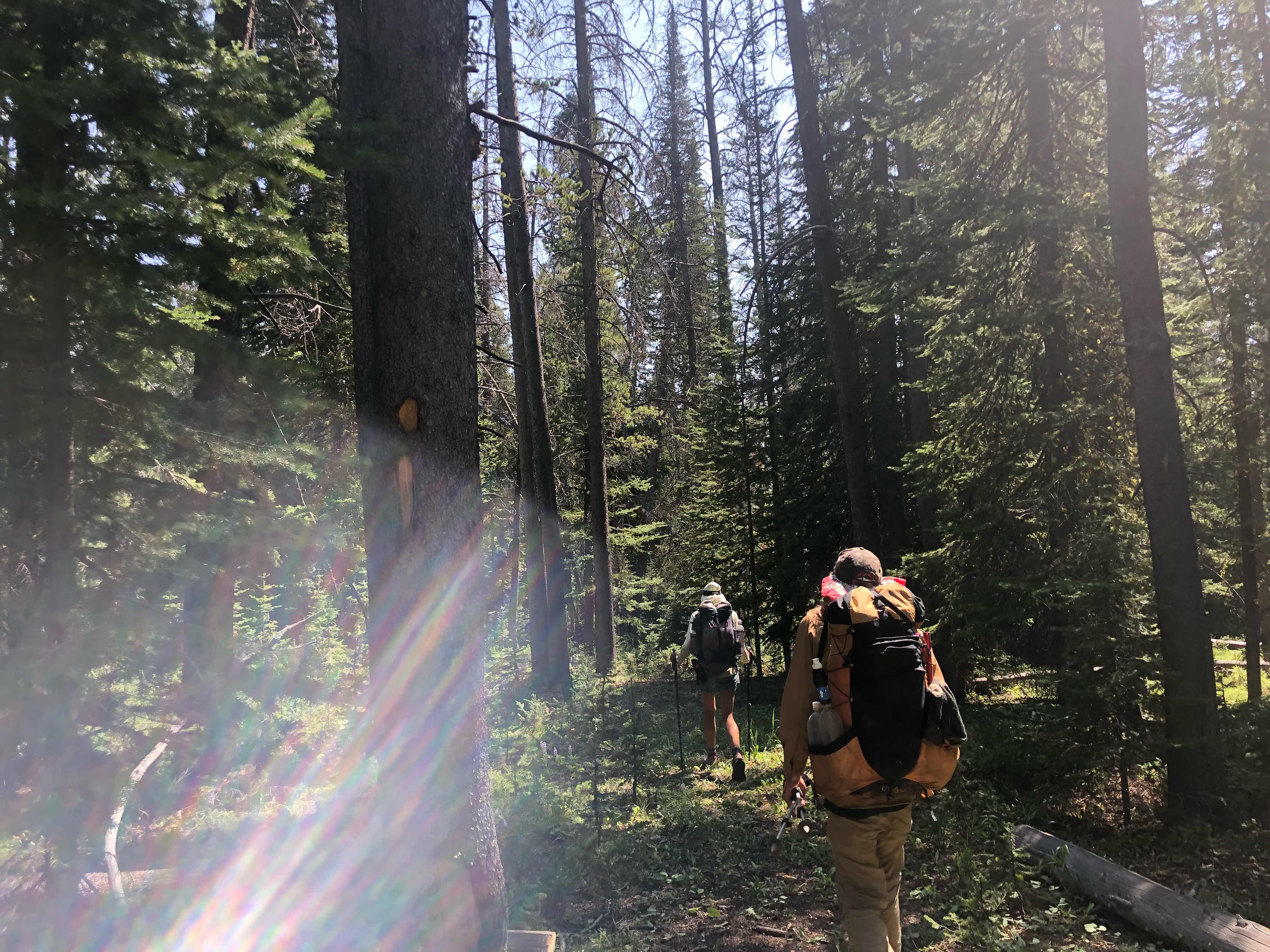 Route finding through nonexistent trail
I’ve been having a problem with the camera on my phone for the last few days. I think there must be some moisture between my phone and the case. My pictures today all came out pretty crappy. At some point I just stopped taking pictures all together.
The trail left the roads for a brief period of time. The trail was actually nonexistent for most of that time. We really had to pay attention to marks on trees and our gps. It made for a few slow miles. Once we cleared that hurdle we stopped for lunch. I took the opportunity to lay out all of my gear in the sun. By the time we had finished lunch all of my gear was dry again. After looking at our maps we saw that we were about to begin a fifteen mile dry stretch. I’ve been a little careless with my water lately so I carried a little more than I thought I would need. Once we started hiking again we had fifteen miles left in the day. The first eight miles flew by. Enigma and I hiked those miles together. We saw a couple hiking southbound. We talked with them briefly. They informed us of s fire over one hundred miles away that had the cdt closed for about twenty miles. Hopefully by the time I we get there the fire will be contained and the trail will reopen. At this point in time there is no alternate route. We will have to shuttle around the area. I’ve been very fortunate with trail closures so far, let’s hope I get lucky. 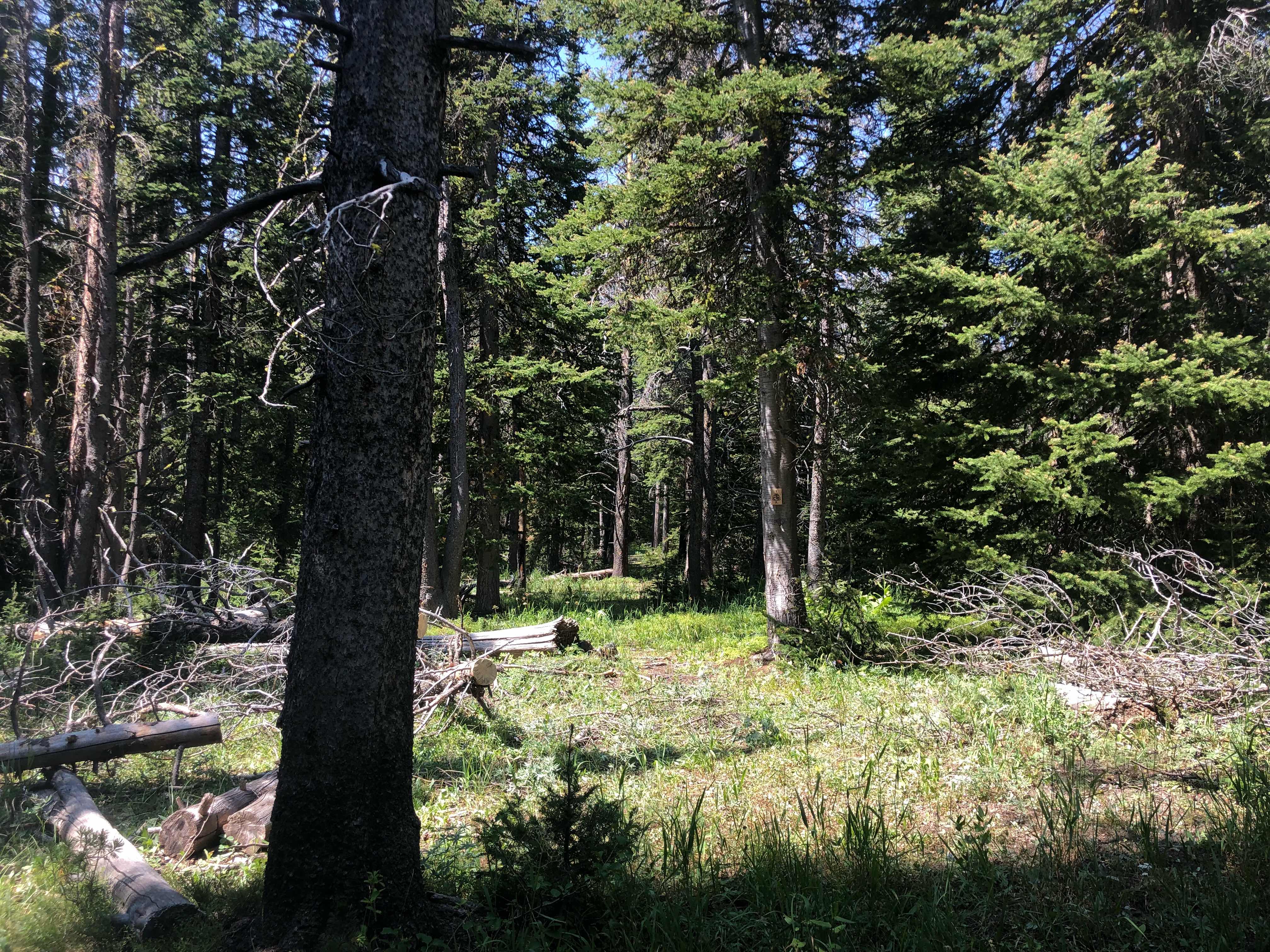 Terrain for most of the afternoon 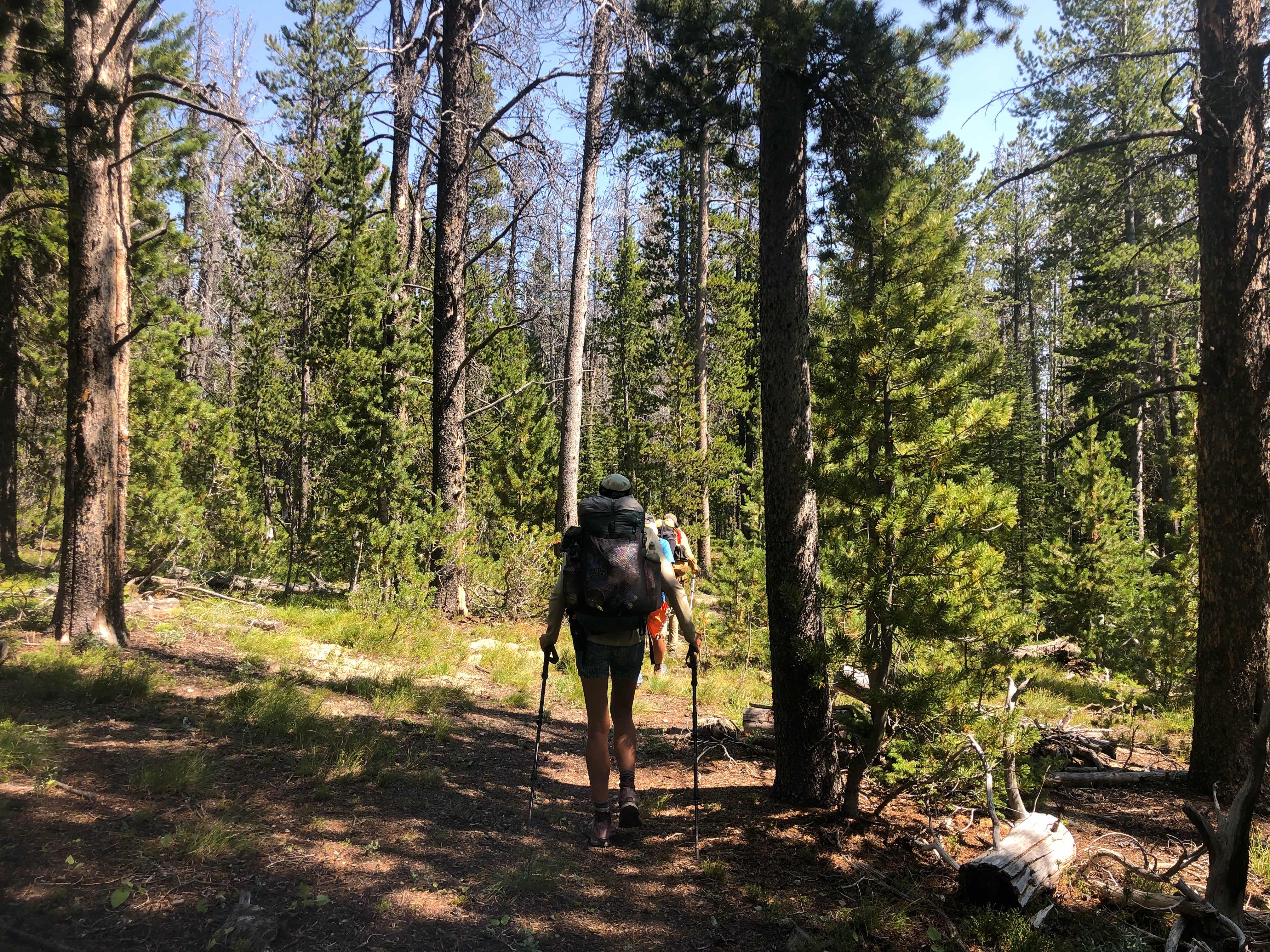 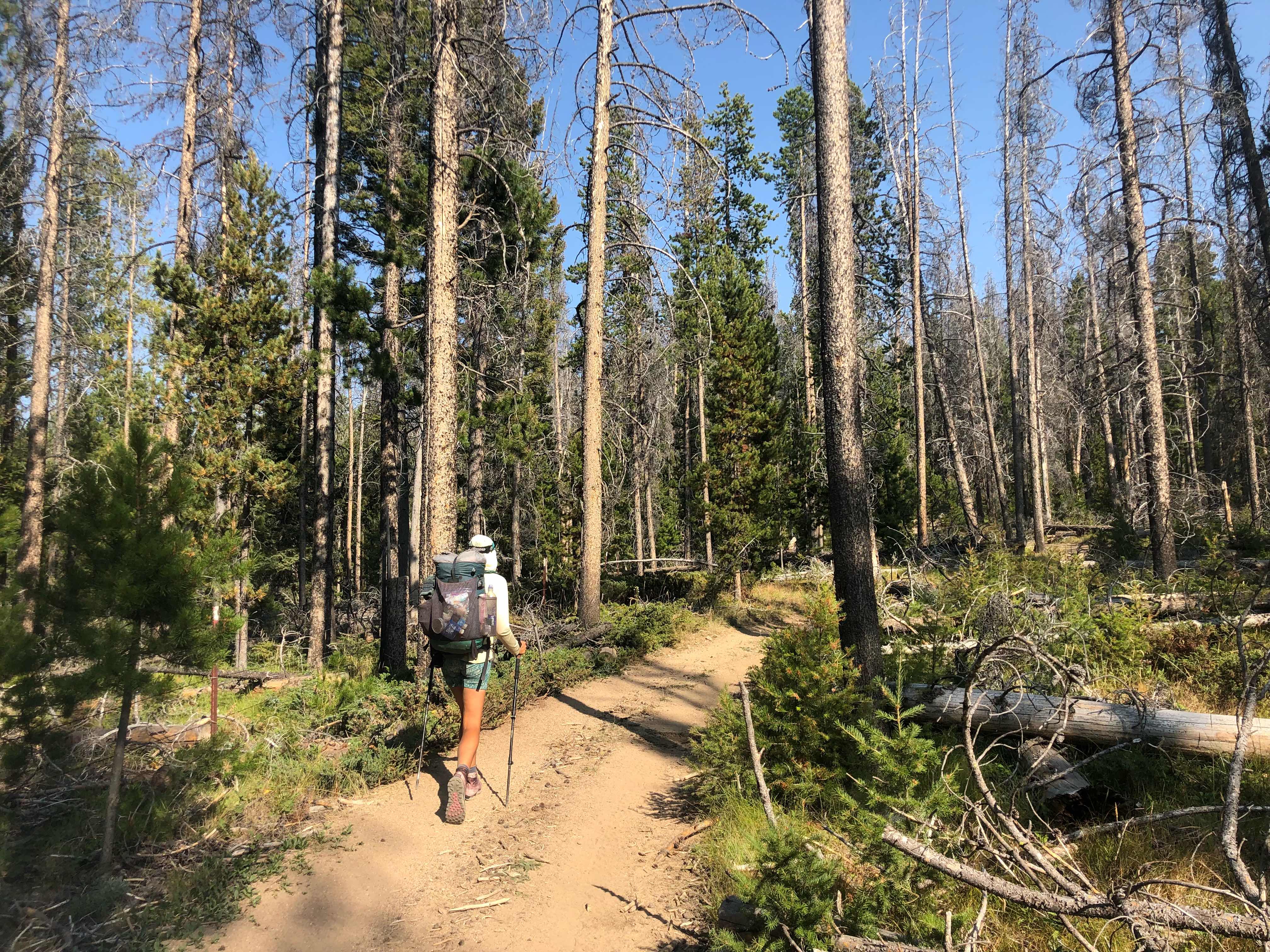 Sour Straws on the road/trail 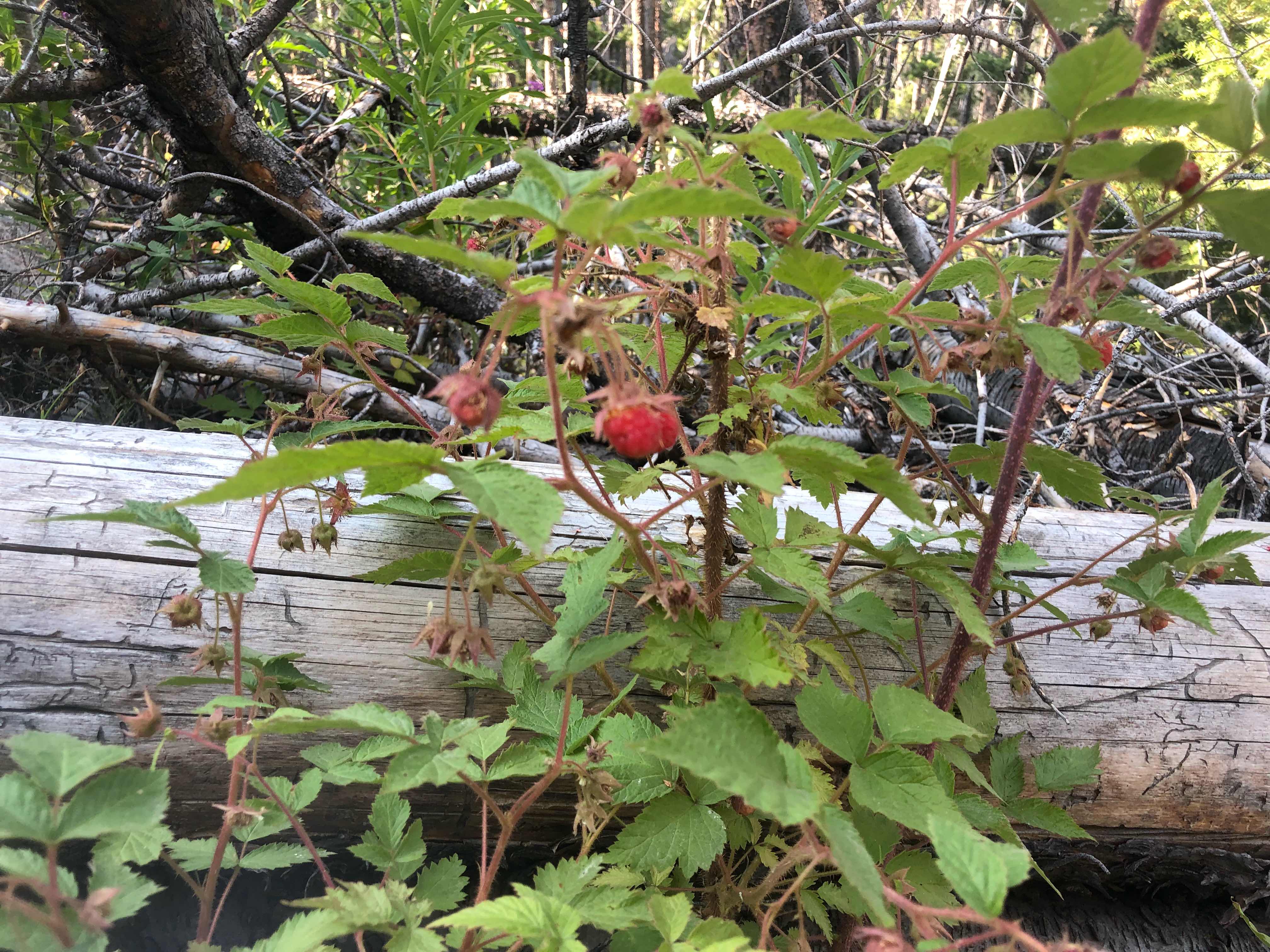 We came across raspberries, strawberries, and currants
Just when I was getting into the zone I came across a large area filled with raspberries. I took my time hiking past and picked a bunch to eat as I hiked. Finding fresh berries on the trail is one of my favorite things about hiking. Enigma has a vast knowledge of edibles and pointed out some black and red currants to me. The red currants I have been seeing quite frequently, but I thought they were a poisonous berry. It is nice to have someone with his skill set to hike with.
We made it to camp around seven o’clock. It has been awhile since we have stopped so early. I’m looking forward to getting a good nights sleep tonight. I’m really tired after the high miles we have been doing. Plus I’ve been staying up late star gazing. I’m sure rationing my food hasn’t helped with my energy levels either.
One thing I forgot to mention the other day is that we are officially in Montana. We are done hiking back and forth between Idaho and Montana. Unfortunately there was not a sign or a border for a photo op. I decided that my 2,200 mile marker should have something to do with officially being in Montana. Since Montana is known as the Big Sky state I thought I would use that somehow. Since I can’t rent a plane to write 2,200 miles in the sky, I had to improvise. 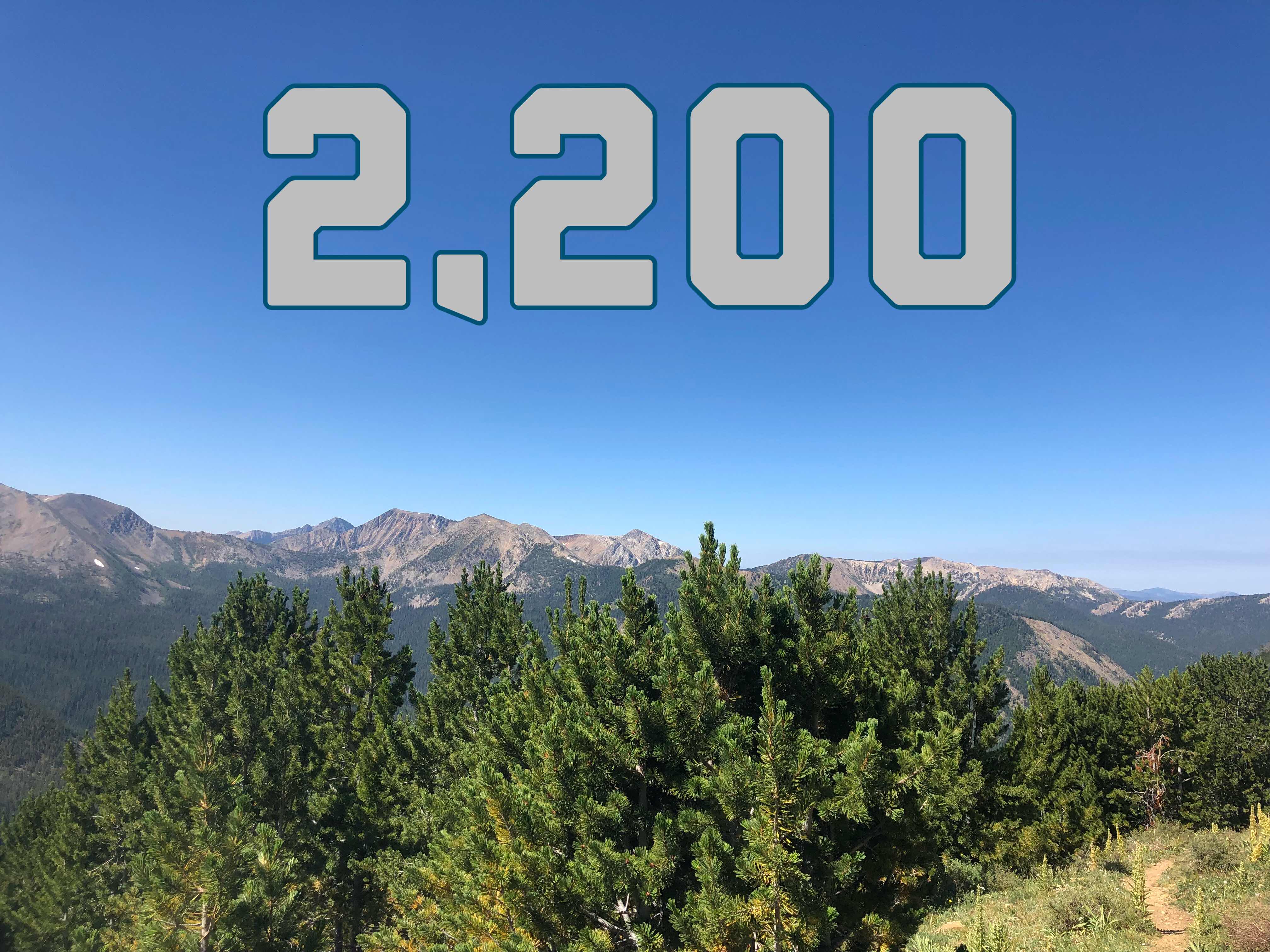 Got to love smart phone technology
500 miles to the border and about 100 miles left to clean up in Colorado!
“It seems to me that trying to live without friends is like milking a bear to get cream for your morning coffee. It is a whole lot of trouble, and then not worth much after you get it.”
- Zora Neale Hurston