We had a very early start this morning. We were camped in a valley last night and it was cold when I got up. I don’t really feel like I hiked through summer on this trail. I think we went straight from spring to fall. I only remember having a few warm nights in the last four months. We started hiking a little after six o’clock. The reason for the early start was that we wanted to hike forty miles today. By starting so early I know that we could have done it. By six thirty in the evening we had hiked thirty five miles. We fell short of our goal only because we took an alternate route at the end of the day.
The morning started off with a 1,300 foot climb. I had on my rain pants, two base layer tops, and my puffy. Halfway up the climb I was sweating something fierce. I was hesitant to take off any layers though. I fully expected the top of the ridge to be windy and cold. I was correct in my thinking. I was really happy with my decision to keep so many layers on. The early morning views o had were fantastic. The constant haziness that I have been hiking through played well with the early morning light. 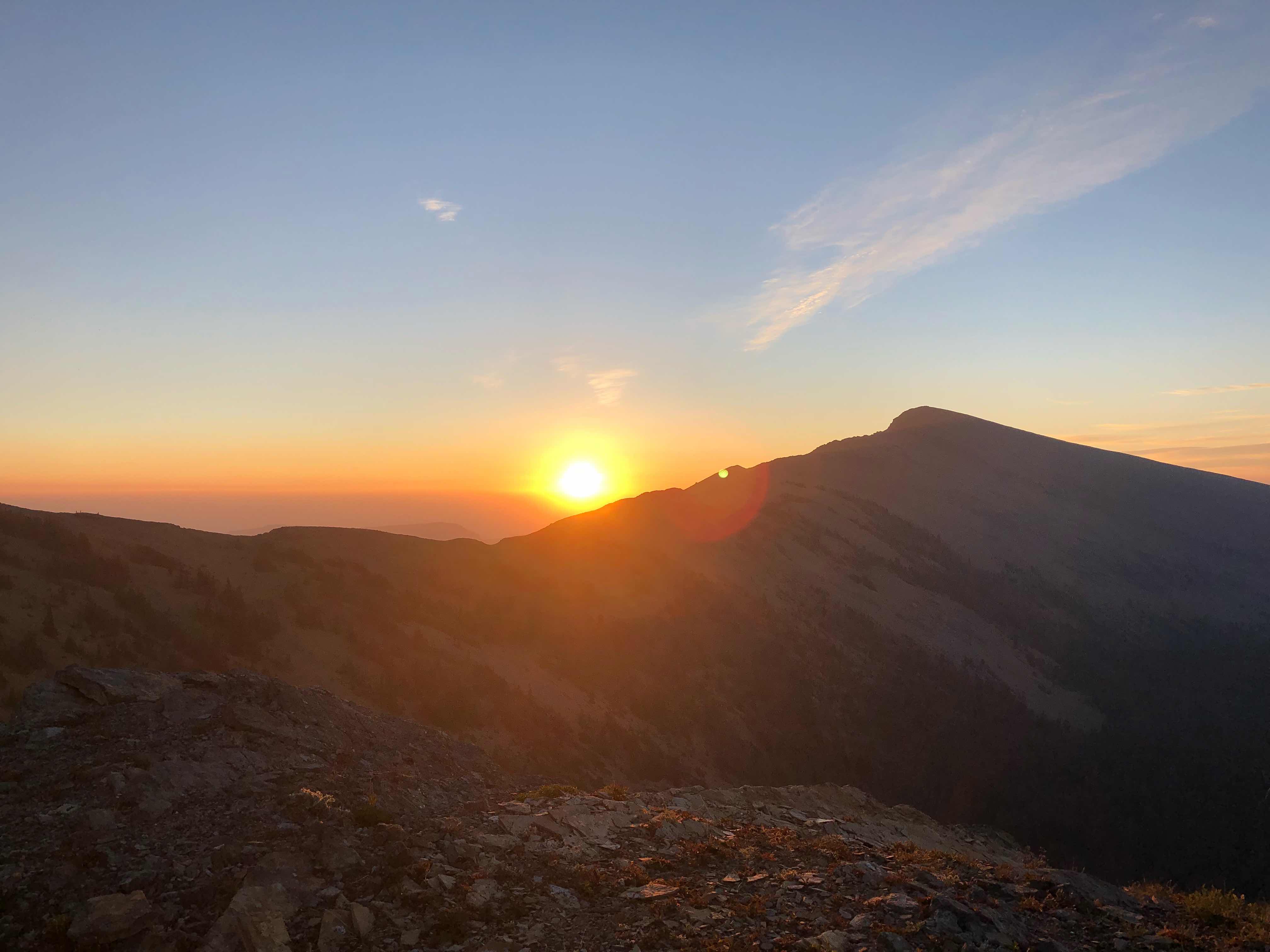 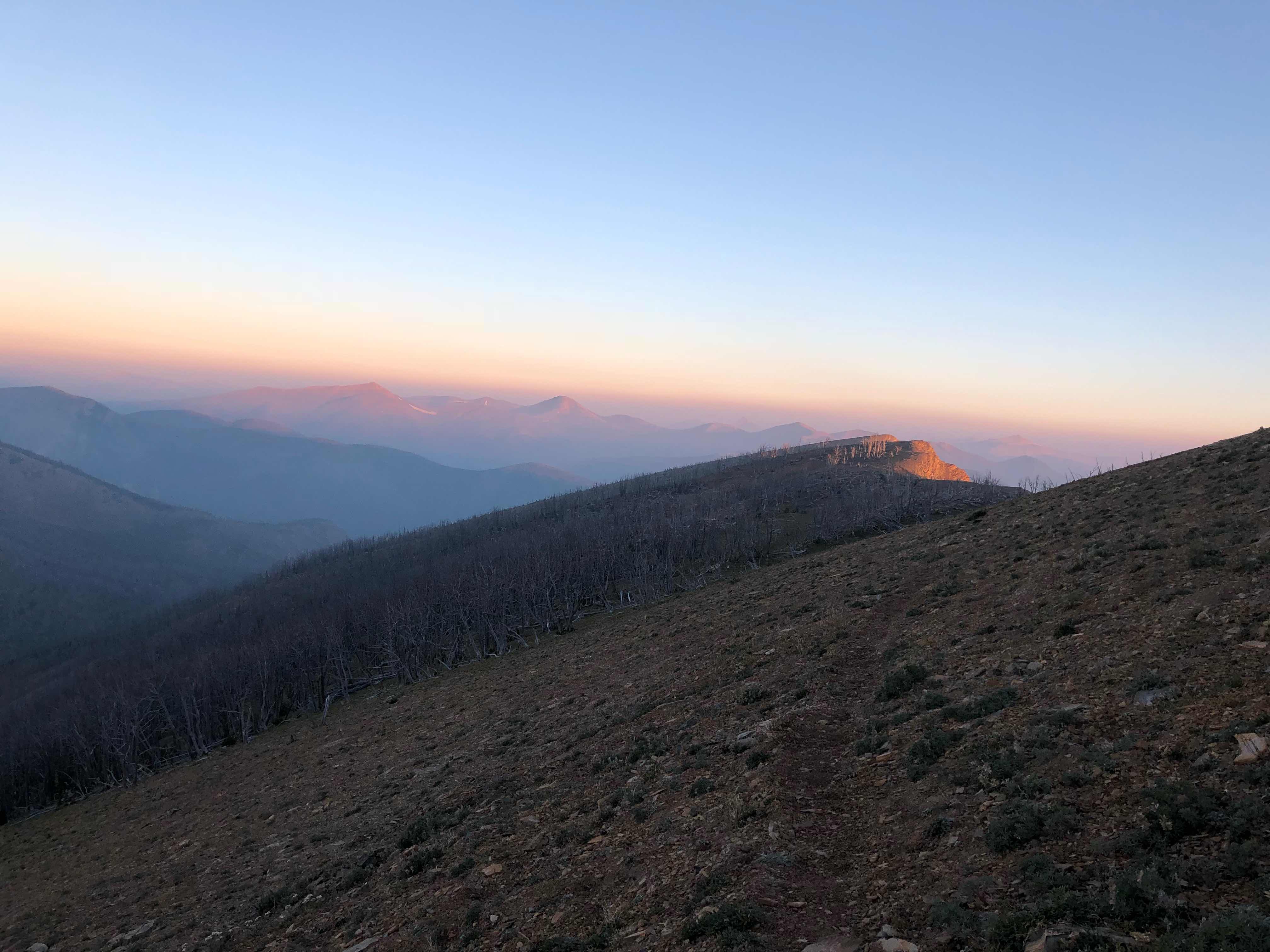 You can actually see the mountains in the distance 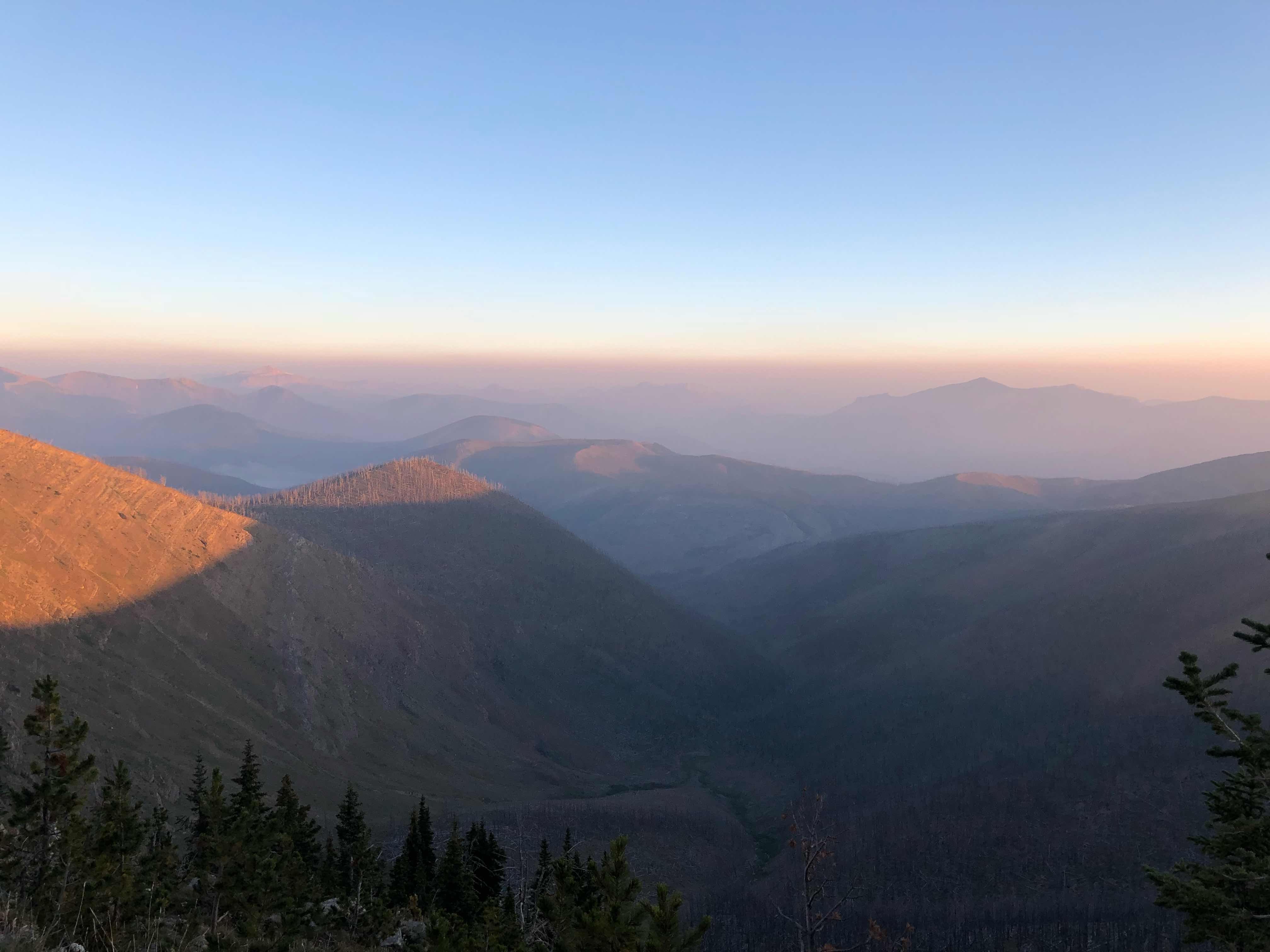 The smoke looks like thick clouds
I went ten miles before I finally stopped for a mini break. I had caught up with Z, which is no small task. He is a really fast hiker and doesn’t take very many breaks. I stopped mainly to take off my remaining layers. Shortly after I stopped Piñata and Straws caught up to me. While we were rearranging our packs, Z took off. We figured that we wouldn’t see him again until later in the day. He was going to hike another 25-30 miles before he took another break. Straws, Piñata, and I hiked out together. Within five minutes we spotted Z coming down the trail towards us. That could only mean one thing. We were off trail. This occurs so frequently on the cdt that none of us were upset or even surprised. We had to backtrack .3 miles. Almost immediately we had a wet stream crossing to contend with. It has been a very long time since I have had to do one of those. 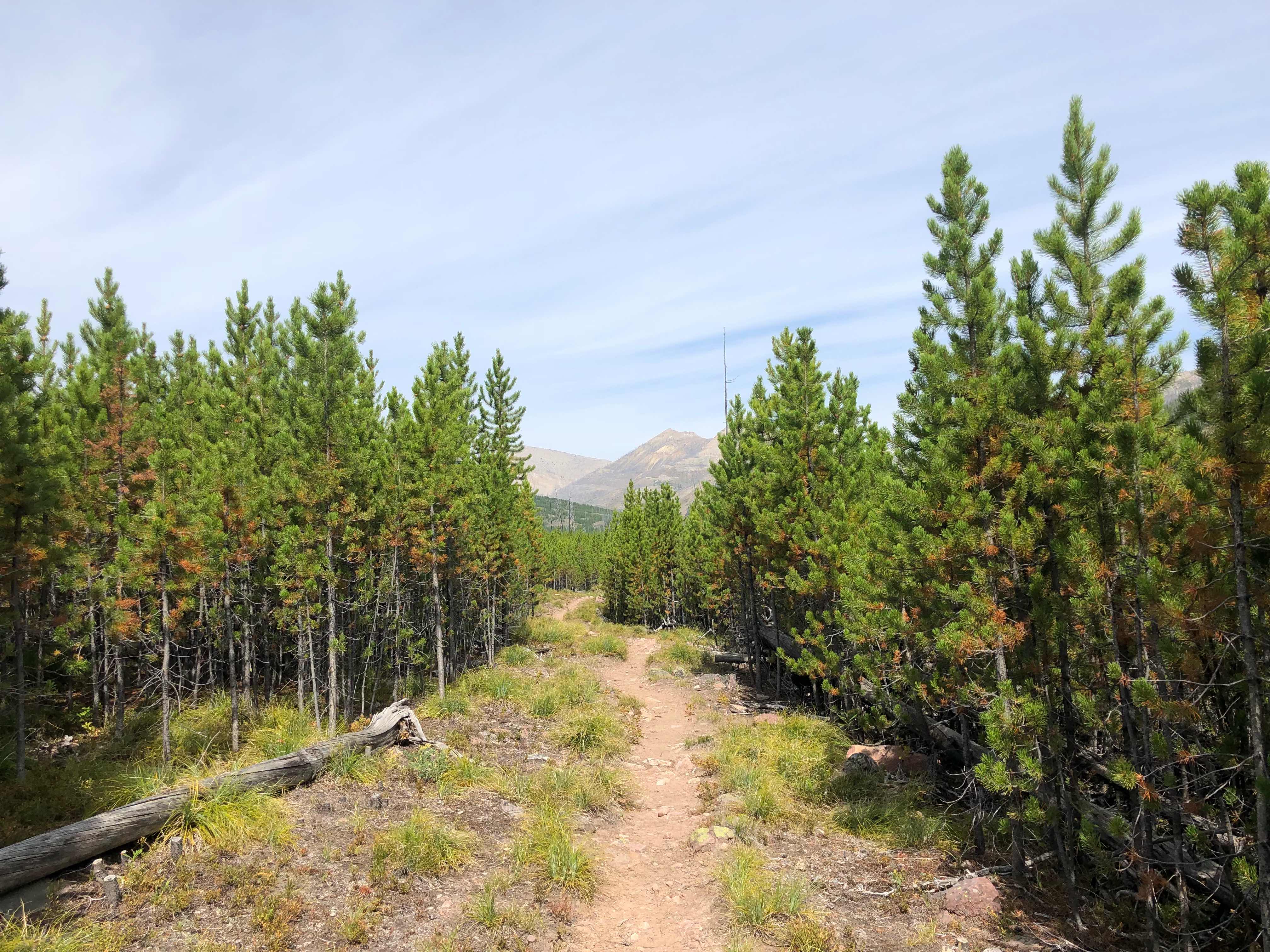 Nice easy trail through an old burn area
Z took off after the stream crossing. I did my best to keep up with him. I wanted to see if I could match his pace for a little bit. I couldn’t quite catch him, but I was able to stay in visual range. I was only planning to stick with him for an hour, but I did much better than that. I caught up to him after nine miles, which was just short of twenty miles for the day. He had stopped to read a forest service sign posted next to the trail. I slowed down to read it as well. It was a notice of a fire closure on the cdt. There wasn’t much information or a date listed. I was hoping that it was an old sign. It directed us to a ranger station close by for more info. When we got to the cabin Piñata and Z went to speak with the ranger. I took the opportunity to sit down and rest. When Z and Piñata came back they had bad news. We weren’t fast enough to outrun the latest fire. Sadly, we will not be able to hike the cdt through the Bob Marshal Wilderness. This really sucks because The Bob is a major highlight of the trail. We were all very disappointed. On the brightside there is an official alternate on a trail. We don’t have to skip a lot of miles or walk a road. The big downside is that this alternate skips the Chinese Wall. The Wall is a massive natural feature that is over 40 miles long. We will get more information on the alternate when we are in town tomorrow. 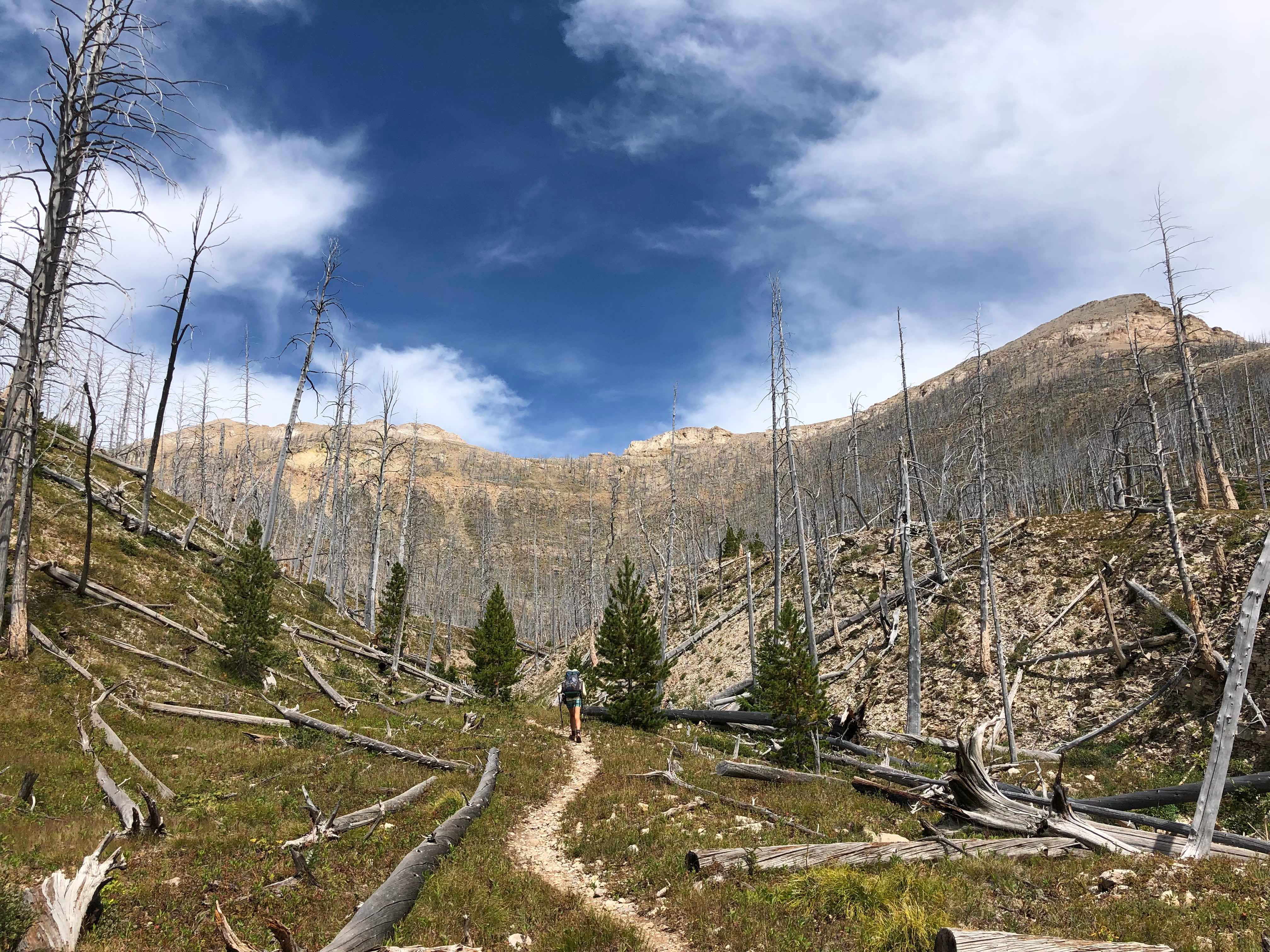 Cool bit of trail
Other than the two major climbs first thing this morning, today was easy hiking. Z commented on how every time he turned around I was right behind him. He said that was a great motivator to keep up the pace. I told him that trying to keep up with him was a great motivator for me. I love how we all push each other to accomplish big days. By four o’clock I had hiked close to thirty miles. Z had gotten just a little ahead of me and I lost sight of him. The area I was hiking through did not match the picture I had in my head. I thought I had to cross a river and steady going uphill again. Instead I was still next to the river and staying level. When I checked my map I was off trail again. I backtracked almost half a mile before I found the trail junction I missed. I crossed the river and began looking for the trail. I looked up and saw Z coming towards me. He had missed the turn as well. While looking at our maps we saw a better way to go, the trail we had been on by mistake was a better option than the cdt. While we walked back towards the alternate trail I spied Piñata and Straws on the alternate. They had missed the junction as well. We took a break to rest and make sure this trail took us to where we needed to be. 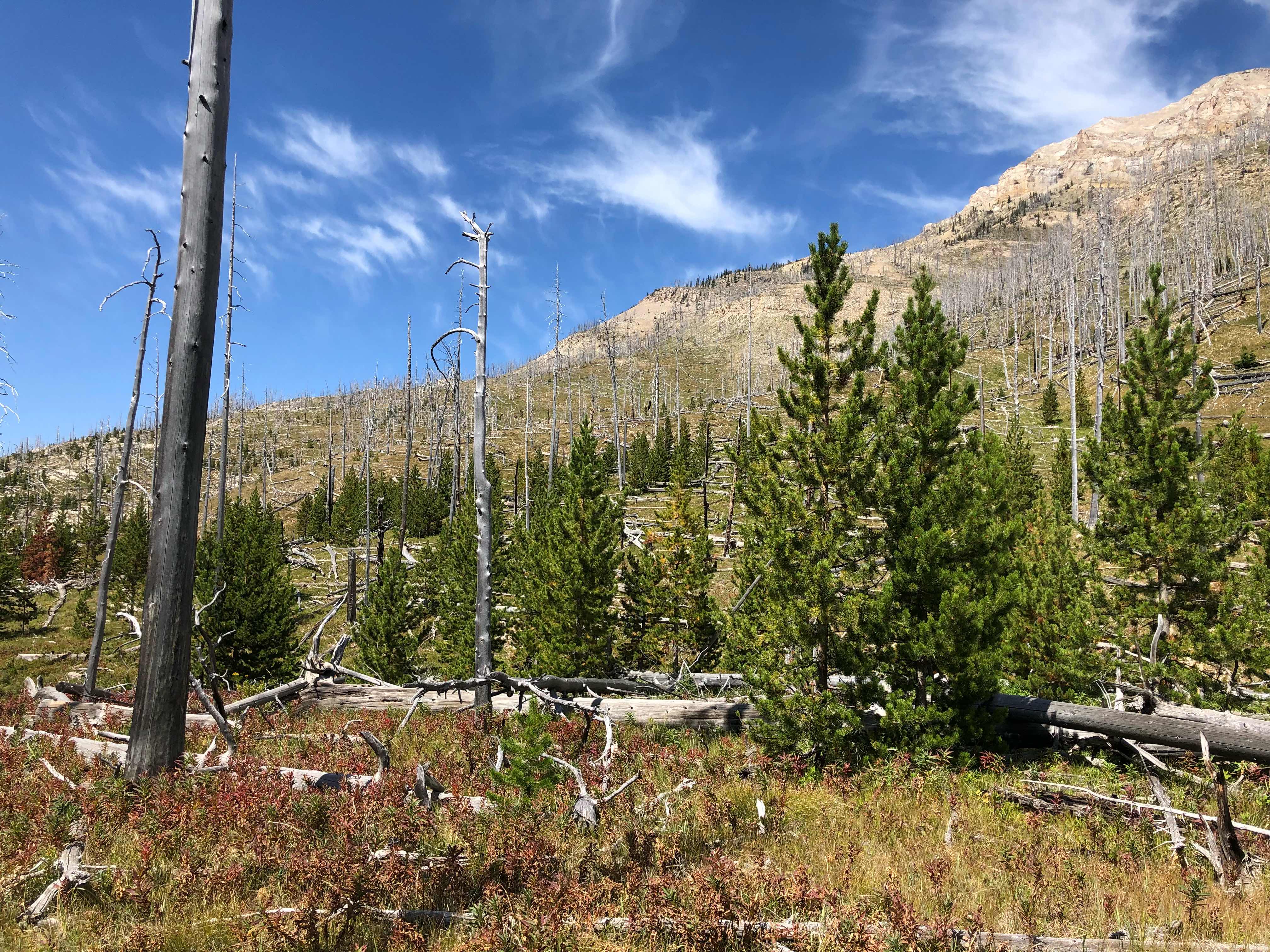 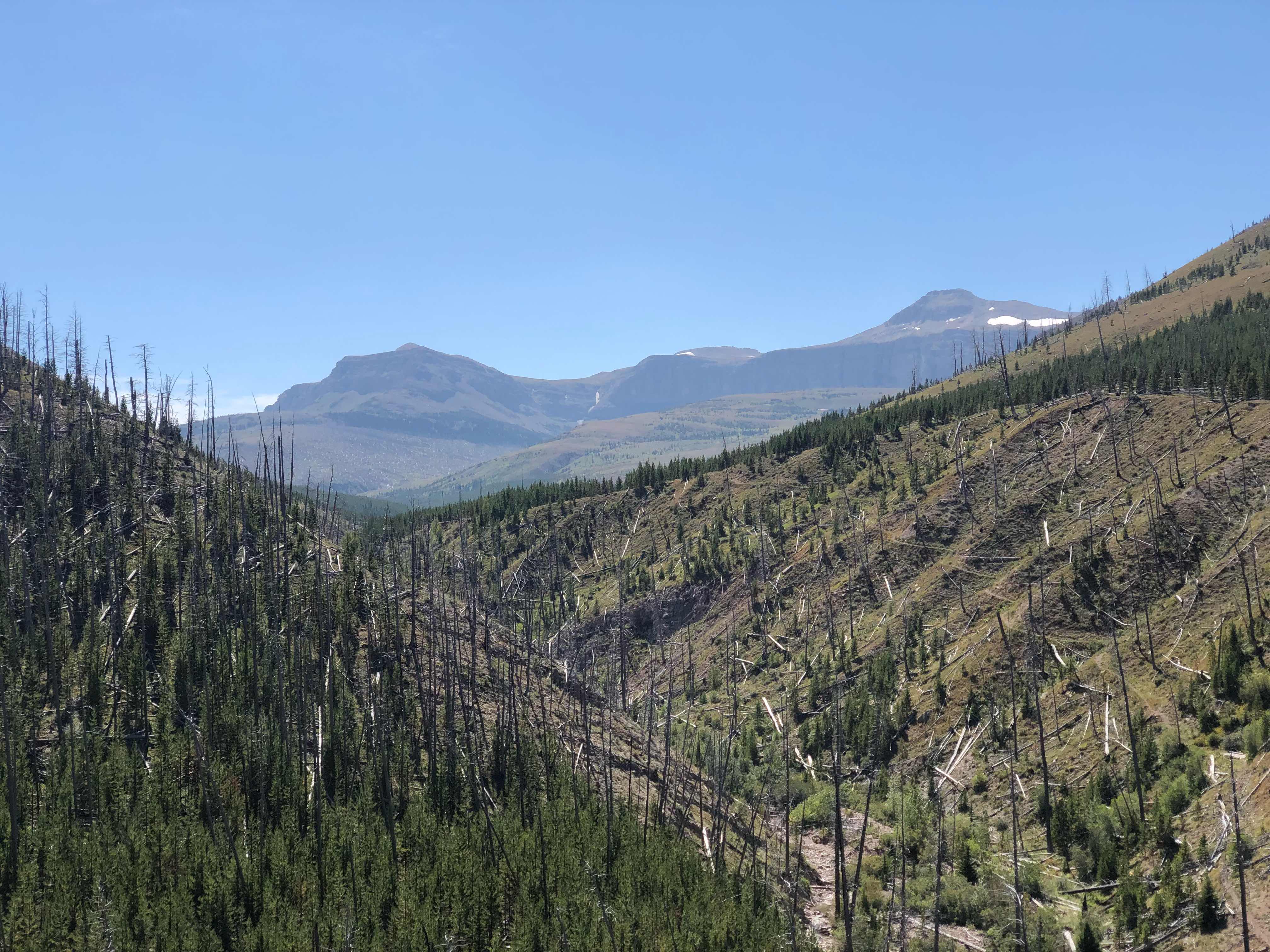 Southern end of The Chinese Wall
The alternate looked pretty easy and Z suggested we play the riddle game to help pass the miles. We are getting pretty good at the game. We answered 2 very quickly. I do t think the game lasted more than two miles. When we first started playing a single riddle would last us hours. The alternate was very easy and fast. I think our pace was close to 4 mph. The trail ended onto a dirt road. The entire area has a lot of dispersed camping sites. There seem to be a lot of horses in the area as well. I passed three horses and riders on the trail just before we got to a trailhead. We discussed trying to hitch into town tonight, but nobody wanted to get to town so late. We set up camp and began dinner. After eating we hung our bear bags. Since this area is commonly used for camping it seemed like a good idea to take some precautions. We were all planning on cowboy camping and had already set up to do so. Just before bed we noticed some dark clouds in the sky. I got a weather report using my Garmin InReach. The forecast called for a ten percent chance of rain. Anya time I see a 10% chance I just assume it will rain. I moved my cowboy camp setup and got out my tent. About twenty minutes after getting into my tent it began to rain. It didn’t last very long, but I felt vindicated. 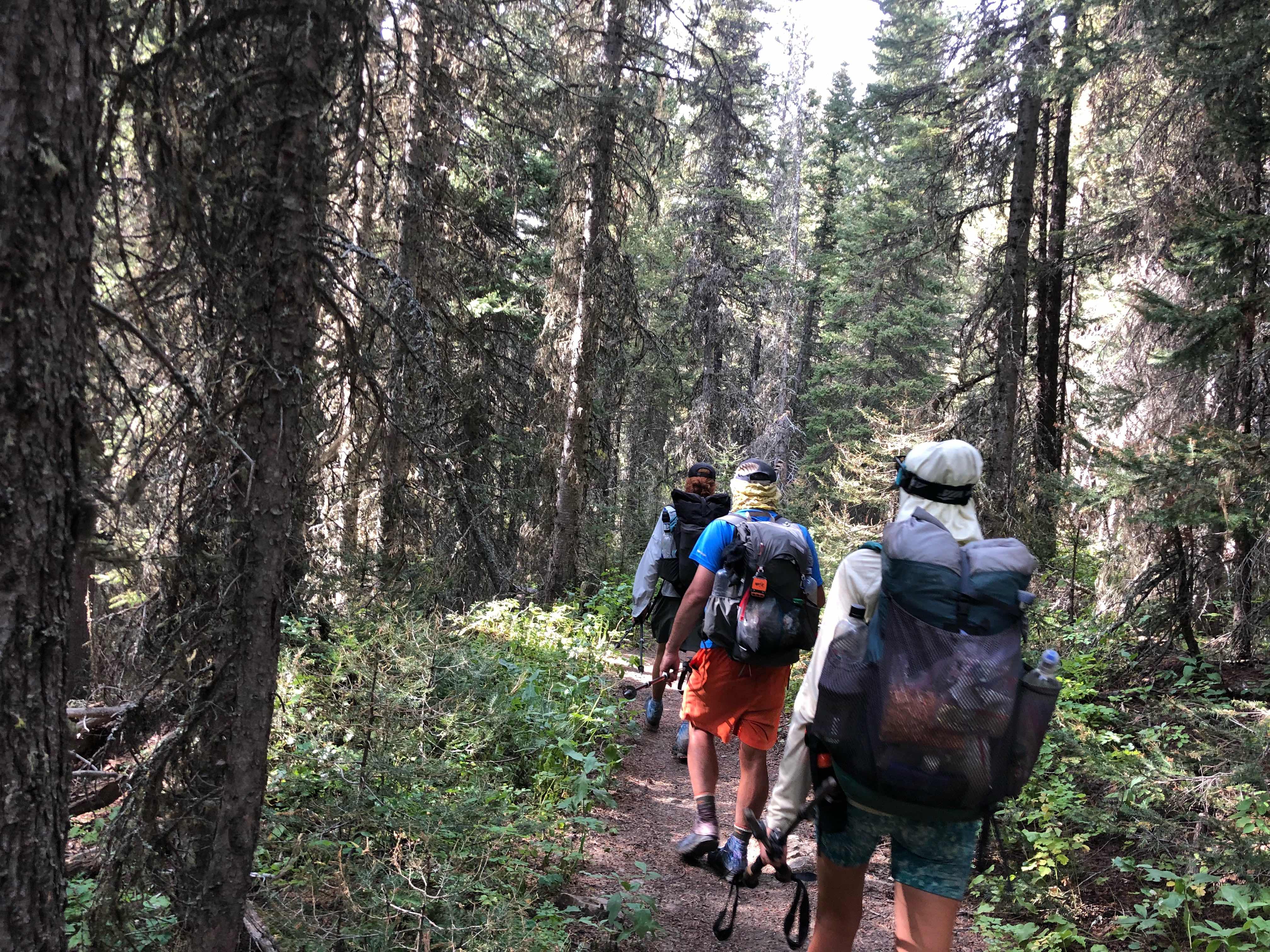 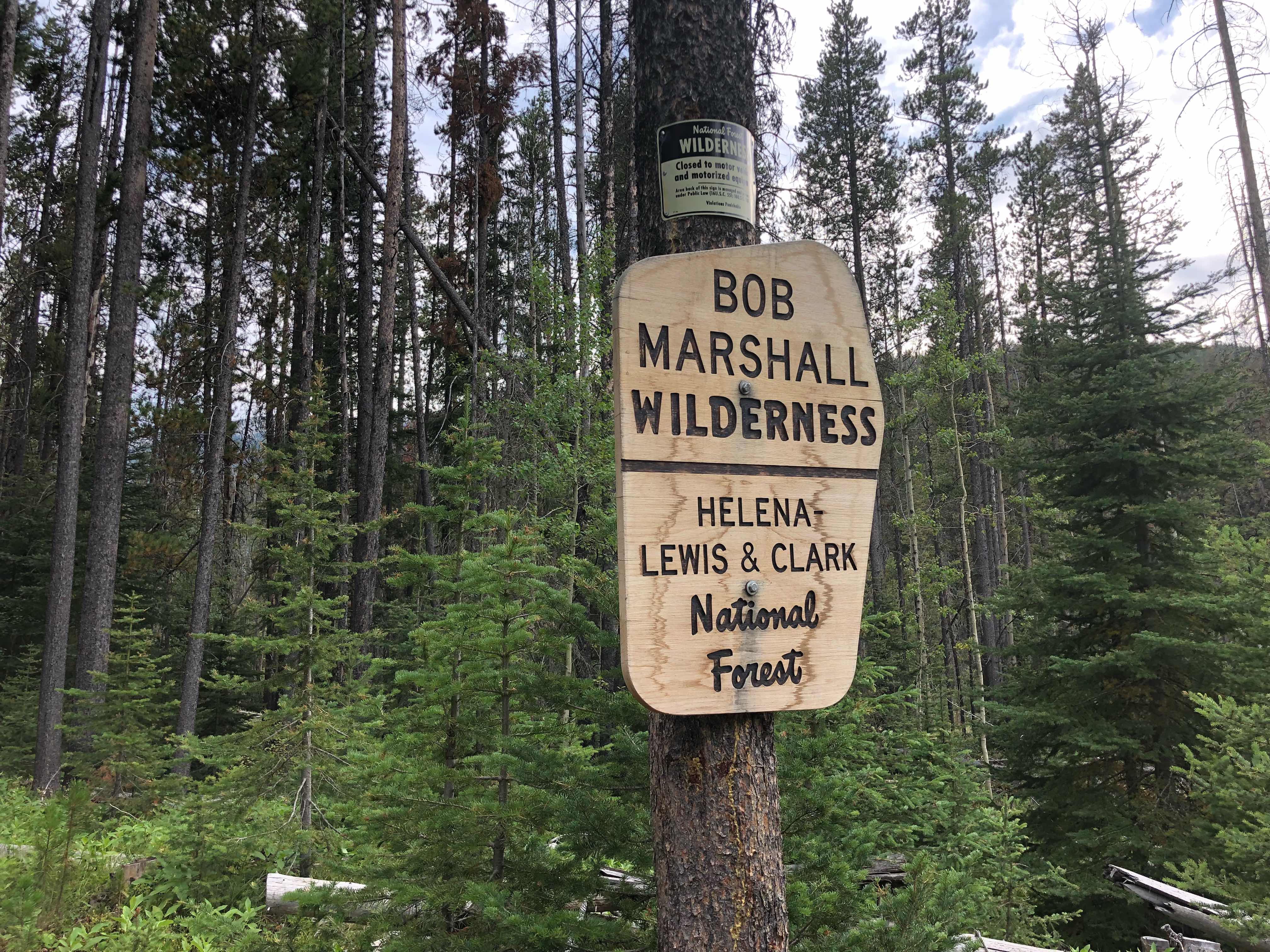 At least I was in The Bob for a little bit today
The fire closure will begin seven miles after we leave town tomorrow. It looks like the fire reroute is close to forty miles shorter than the official cdt. This means I will probably finish one to two days sooner than planned. I’ll keep you posted on the fire closure as soon as I have more info.
“There’s a lot of blood, sweat, and guts between dreams and success.”
- Paul “Bear” Bryant