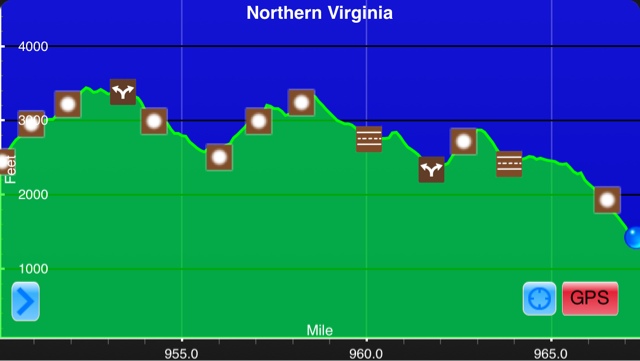 No sense of urgency would be the best way to describe how I felt today. Our goal was to hike until we got to Tom Floyd Shelter, which was only 15.6 miles away. I have a hard time hiking anything less than 18 now, unless there are places to stop(like waysides, restaurants, swimming holes). I was going to sleep in and take my time leaving camp, but I was still up at 6:00. I left earlier than usual, 6:45, because we were camped so close to the trail. I was going to stop and have a leisurely breakfast and make coffee at the first viewpoint I came across, but it wasn't very conducive to that. 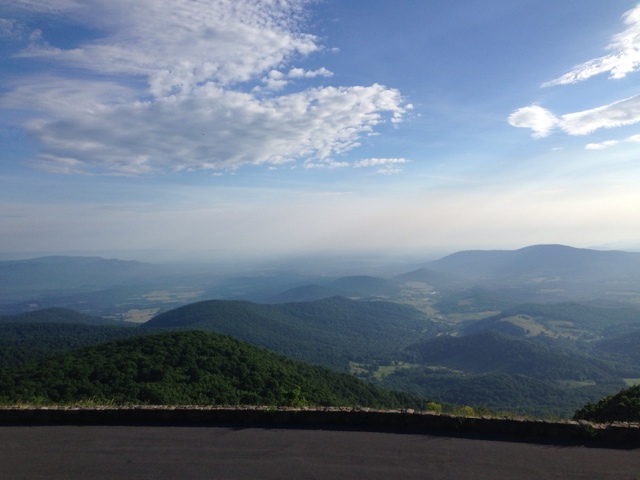 Awesome view, but too close to traffic
I tried to stop at the next viewpoint, but they park rangers had it closed off due to Peregrine falcon activity. By this point I had hiked over 3 miles and was starving. I settled on eating breakfast on the side of the trail and skipped the coffee again, it was too warm out to enjoy a hot cup of anything. I did discover that I finally had good cell phone reception, so I took some time to post my blog.
Even though I felt zero sense of urgency, I was hurrying through the miles. Airlock and I were chatting away and making a ton of noise, when we surprised a bear. Usually they run away as fast and as far as they can, but this bear only went 20 yards from us and stopped. We both grabbed our cameras and tried to get a picture. It was a little disconcerting that the bear wasn't fleeing. We each snapped a few pictures and then tried to shoo the bear away. It still didn't go very far, but far enough that we felt comfortable walking away. I think it was probably a momma bear and her cubs were somewhere close by. I have seen 8 bears while in SNP. This was my fifth bear in three days and I would see a momma bear with two cubs at the parks boundary line later in the day.

Not the best picture, but now I have photographic evidence to support my claims
Before I knew it we were at the next shelter, Gravel Springs Hut. We had already decided to linger around the hut to kill some time, but I was pleasantly surprised to see a sign for trail magic as we were approaching the hut. 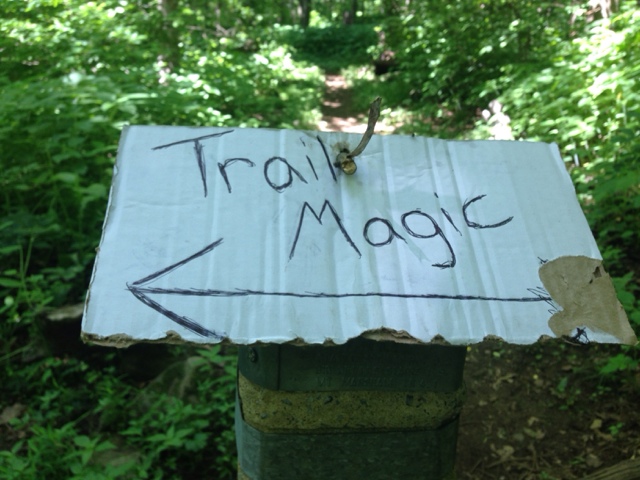 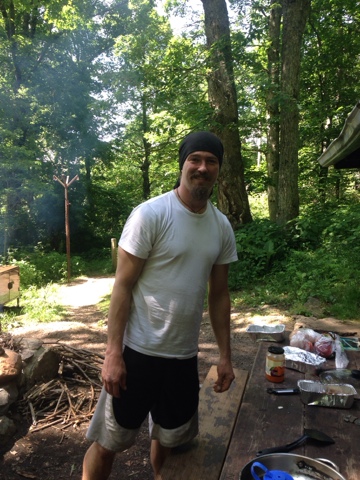 Previous thru-hiker, Jam Session
Jam Session and his dog, Bear Bait, successfully completed their thru-hike a few years ago. They fed us banana nut bread and offered us scrambled eggs and pancakes. Jam Session and two of his friends were going to be at the hut all day providing breakfast, lunch, and dinner. Thanks for the food and conversation. You guys rock!!!
As we were relaxing and killing time we got to watch six park rangers install a bear vault. I'm pretty sure it was only a 2-3 person job, but it was very entertaining to watch them work.

How many Rangers does it take to install a bear vault?
The next nine miles of the day seemed to take forever. I apparently need an insane goal to keep me motivated and happy. I was just going through the motions for the rest of the afternoon. The terrain was very easy, but it was very hot out today. I made it to our final destination, Tom Floyd Shelter at 3:45. As I was scouting out trees to hang my hammock I noticed the sky was getting awfully dark. I had great cell phone reception, so I checked the weather radar. A major storm was getting ready to hit. I abandoned my search for trees and prepared to hunker down in the shelter to wait out the storm. I was getting concerned about, Airlock, but she appeared from the woods as the rain began to fall. From my quick scout of our surroundings I wasn't too hopeful of finding a place for my hammock and I made, what would turn out to be, a very stupid decision. 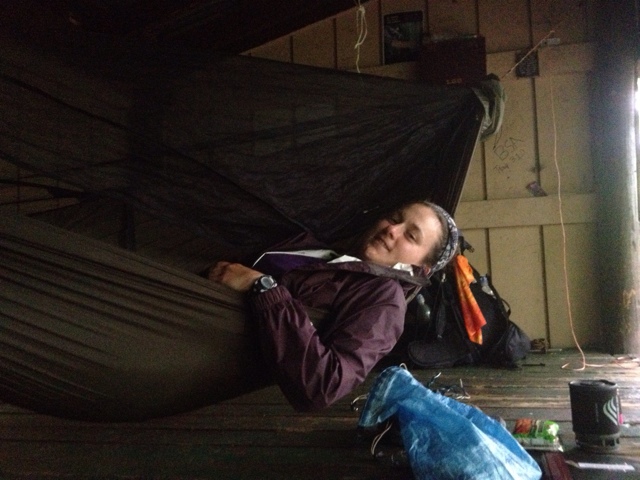 I hung my hammock in the shelter
Hanging your hammock or setting up your tent in the shelter isn't a very socially acceptable thing to do. It's only 3 more miles into town from here, so I thought nobody else would stay here. When the rain stopped I looked everywhere to find a good spot, but all of the usable trees were covered in poison ivy. I set about doing all of my other camp chores, but I didn't feel like walking .3 miles to get water. I had half a liter left after cooking dinner so I skipped getting water(another dumb move). As I was settling in to write my blog, I looked up to see a hiker approaching. I was praying that he didn't want to stay in the shelter and would be a nice hiker and setup his tent. I was quickly disappointed. He wanted in the shelter. I could have been a jerk and kept my hammock up, there was still room for one more person, but he said there were three others behind him. I did the respectable thing and took my hammock down. The way I saw it I had three options; 1. I sleep in the shelter(not a chance in hell) 2. I hang my tree straps in poison ivy(risky proposition) 3. I hike on hoping to find a stealth spot(only real choice)
Those were the circumstances that had me leaving a nice cozy spot at 7:45 pm. I quickly discovered that I no longer had enough water to have a comfortable night. I'm not going to die from dehydration, but I'm not very happy with myself for having to go to bed thirsty. I found a great stealth spot one mile further down the trail.
At least tomorrow morning I only have 2.1 miles to hike before the luxury begins. My nero at Airlock and Gary's house promises to be amazing. I'm also very pleased to report that I only have 51.6 miles left of Virginia!!!! I am very ready to be done with this state.
"For Attractive lips, speak words of kindness.
For lovely eyes, seek out the good in people.
For a slim figure, share your food with the hungry.
For beautiful hair, let a child run their fingers through it once a day.
For poise, walk with the knowledge that you never walk alone.
People, more than things, have to be restored, renewed, revived, reclaimed, and redeemed. Remember, if you ever need a helping hand, you will find one at the end of each of your arms.
As you grow older, you will discover that you have two hands, one for helping yourself and the other for helping others."
-Sam Levenson
Posted by Yoda at 8:37 PM