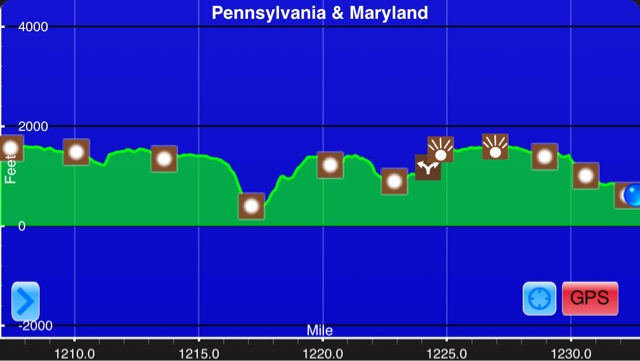 I had a pretty rough night last night. I felt something bump into my hammock and immediately I was wide awake. I thought maybe I dreamt it, but then I heard the sniffing sound. I wasn't sure what to do. There was definitely a large animal right outside of my hammock. I laid as still as I possibly could. Just as I was getting ready to call out to scare the bear away, I heard a jingling sound. It took a second for my brain to process the sound, it was the sound a dog collar makes. I immediately relaxed, but my heart was still racing. A family of five with three dogs had arrived at the shelter at 2:30 am. They proceeded to loudly set up camp directly behind my hammock. They weren't even trying to be quiet. After thinking I was going to be eaten by a bear, I couldn't go back to sleep. I tossed and turned until 6:30, when I finally gave up on sleep and got up.
Everyone in the shelter and tent sites was up pretty early as well. The big bear-dog was barking its head off and no one could sleep through that. I made coffee for the first time in a month. Partly because I needed the caffeine and partly because it was so cold out(low 50's). As I  prepared to pack up camp, I noticed the bear-dog was next to my hammock. As I approached, he went nuts. He started barking and lunged at me. I back pedaled and called out for help. He had me pinned against a tree, snarling and barking at me from less than three feet away. Finally the owner called him off. The guy never apologized or said anything to me. After I changed my shorts, I thought about saying something to him, but I decided that was a bad idea. I quickly packed my things up before Kujo could come back. I was on the trail by 7:30.
The first section of the day was relatively easy, except for the rocks. They have just become a part of life. I can hardly remember a time when my feet didn't ache from repeatedly being stabbed by the jagged bastards. After a pretty tough climb, I sat down to filter some water. As I was filtering two hikers approached. They, like most hikers these days, were new faces to me, Happy, from New Zealand, and Old Eagle Scout. We talked about the craziness with the bear-dog and about their owners showing up at the shelter so late. We ended up hiking and talking together for the next several miles. Eventually they got ahead of me when I stopped to look at a viewpoint. 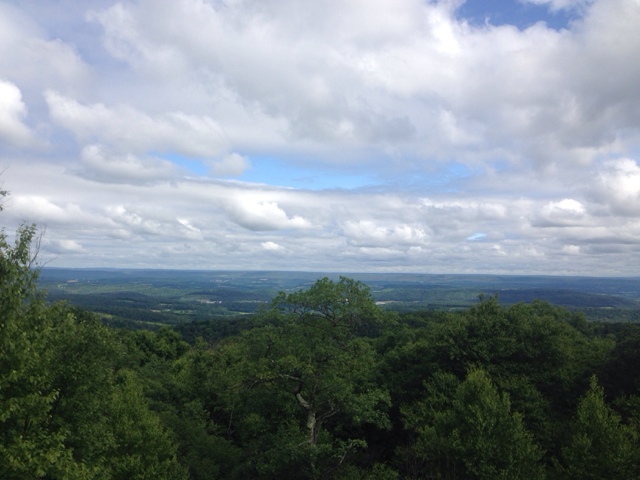 Dan's Viewpoint(not sure who Dan is)
When I got back on the trail, China Rock, was right behind me. We hiked into Port Clinton together. The downhill into town was supposed to be really tough, but I didn't think it was that bad. Port Clinton didn't have much to offer. There was no gas station, convenience store, or restaurant. There was, however, The Peanut Shop. They had all kinds of candy, chocolate, and cold sodas. I bought some chocolate covered bacon, fudge, and a Mt. Dew. The chocolate covered bacon was fantastic! I chilled outside with Happy, Old Eagle Scout, China Rock, Little Free Bird, South Paw, Adios, and Icarus. We all enjoyed our various goodies and basked in the sun. No one was looking forward to the climb out of town. 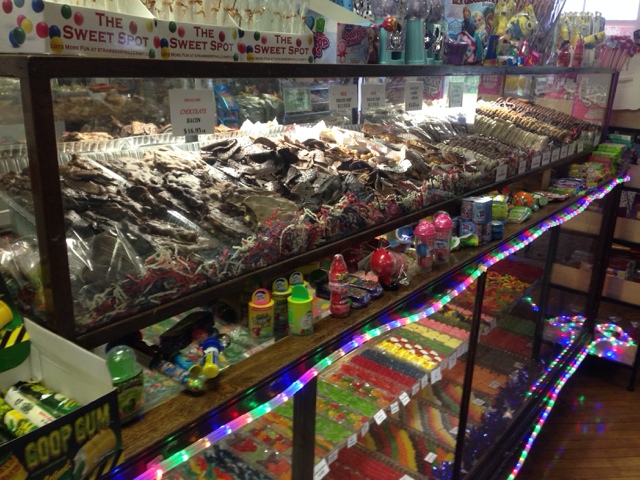 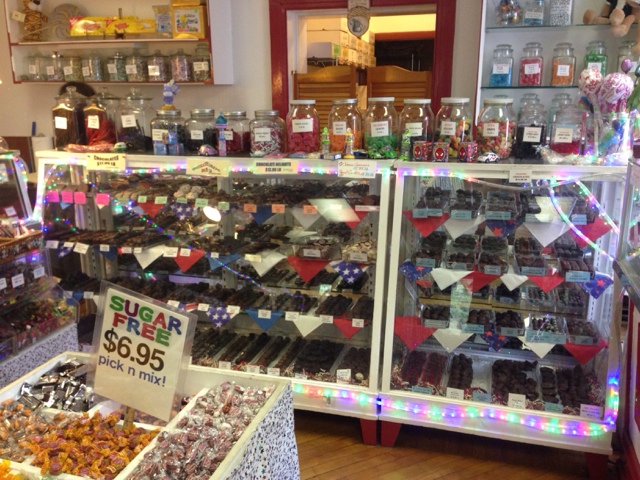 Yum Yum
I was the first one to head out. I wanted to get the climb over with before my sugar rush wore off. 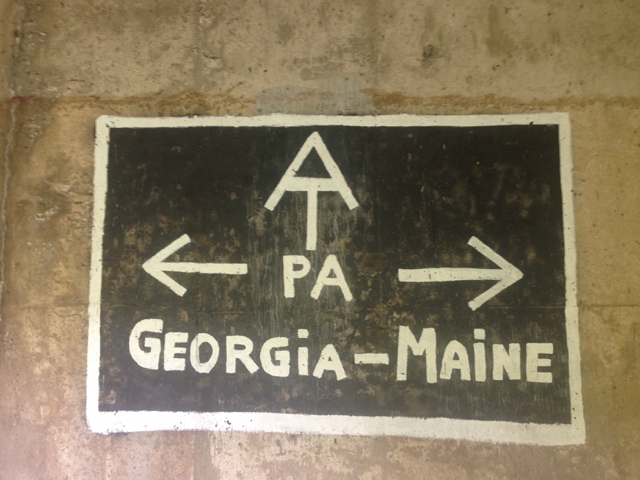 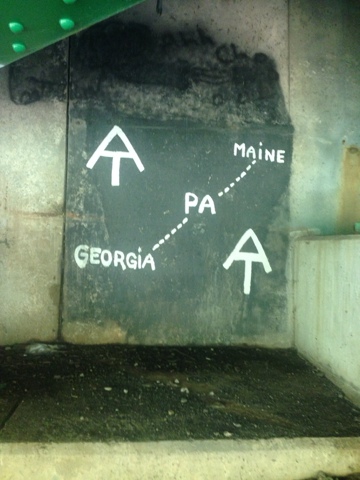 Simplified trail map graffiti
The climb uphill wasn't that bad. I made short work of it and pushed on. The flat terrain after was the challenge. It was very rocky, with medium sized boulders, that were just waiting to twist your ankle. I made it through the obstacle field with no problems. The flat terrain gave way to another uphill climb, this one didn't look too hard on paper, but it was steep and, you guessed it, filled with large boulders. At the end of it I was huffing and puffing, but excited for the view. Walking Rhythm posted a comment on my blog about Pulpit Rock and The Pinnacle, these were the views I had just worked so hard for. 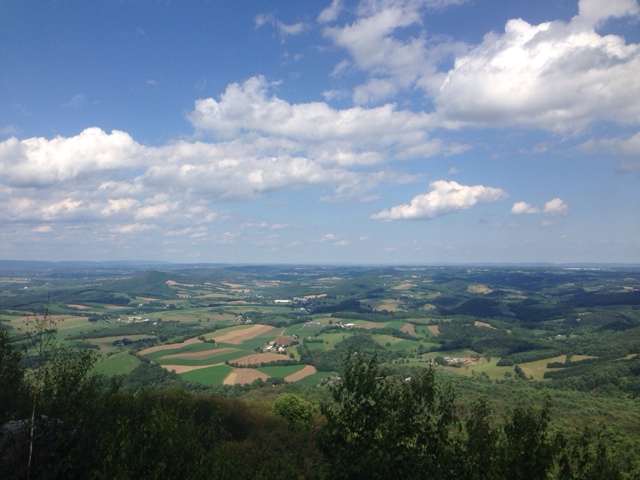 The Pinnacle
At Pulpit Rock I met, Moddo. He is a thru-hiker from S. Dakota. He told me about a phrase he had coined to refer to all of the rocks, Pennsylvania Flowers. I loved it and told him I was stealing it.
By the time I left, The Pinnacle viewpoint, my feet and legs were shot. The PA flowers had worn me out, both physically and mentally. I still had more than five miles left to hike and was not sure I could make it to the shelter. By some kind of miracle most of the next five miles followed a gravel road with very few PA flowers. I began to make up some lost time.
I had previously planned to meet, China Rock, at a stealth campsite before the shelter. I made it there with plenty of time left in the day. I decided to push farther and make it into the shelter. I left a note for China Rock and pushed on. 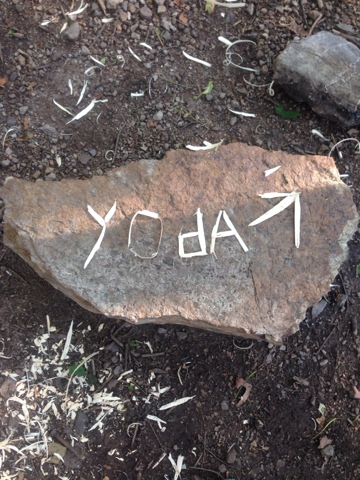 Trail message
The final two miles were both easy and difficult. The force was still with me and the trail remained flat and flower free. It was difficult because of how badly the soles of my feet hurt.
I made it to the shelter pretty quickly considering it was the end of a long day. The Eckville shelter is different in many ways. First of all, it is located on a road. Second, it has running water, including a flush toilet and a solar shower. Third, it is a bunkhouse behind a guys house. I'll get pictures for you tomorrow. The care taker also has property across the street for tenting and hammocking. I'm camped by, Rusty, Griffin, Old Eagle Scout, Moddo, and two other ladies I can't remember what their trail names are. I'm now in the heaviest section of Pennsylvania flowers and I can't wait until they are over, 35 miles north of New Jersey.
"Friends are as companions on a journey, who ought to aid each other to persevere in the road to a happier life." -Pythagoras
Posted by Yoda at 6:29 AM