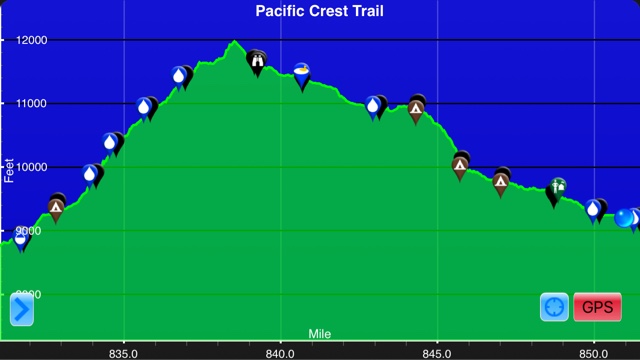 I was exhausted when I finally went to bed last night. It was no big surprise that when my alarm went off this morning I hit the snooze button. I rarely do that while I'm on trail, but this morning I needed a little more sleep. When I finally got out of my tent I didn't mess around. I packed up and ate as quickly as possible. The morning started off with a stream crossing within seconds of leaving camp. It is safe to say that from here on out I will have 15-30 of these a day. The first few were really easy. I either had rocks I could hop across or nice logs to walk across. 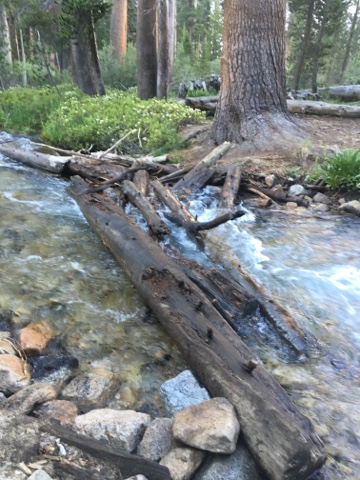 First thing this morning
I had about six miles to hike to make it to the top of Muir Pass, our final major pass of the Sierra. We still have passes to contend with, but the remaining ones are all under 11,000 feet. The first part of the hike up was quite lovely and very gradual. We walked past one of the coolest rock formations that I have seen on any trail. 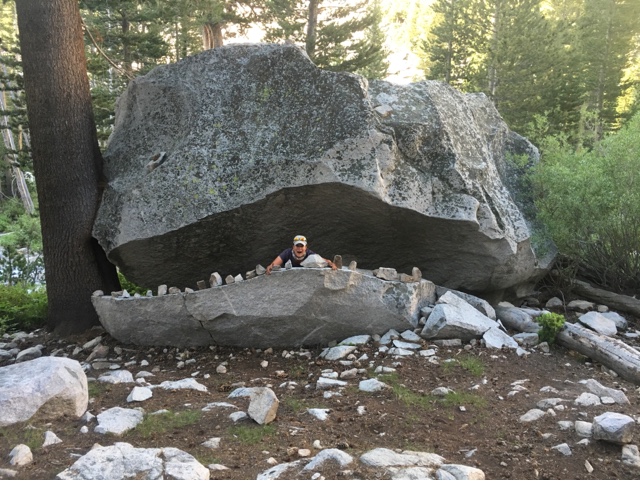 Rock monster
The second part was also lovely, but completely covered in snow. Prior to walking through snow field after snow field I had to deal with a major water crossing. There was no dry route across and the water was drainage from a half frozen lake. It was really cold. About half way through my feet and legs were completely numb. 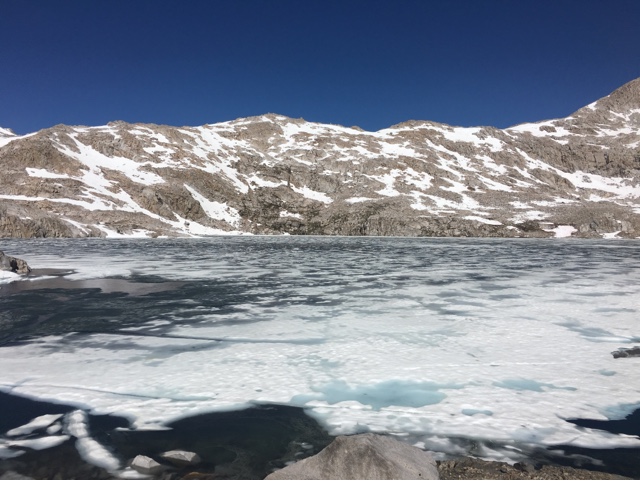 Yup! That water was COLD
Outro had already made it across and stayed close by to make sure I made it safely across as well. Once I made it through we waited for Zuul. We stuck together for the rest of the morning. Conditions were just difficult enough that we needed to spot for one another. Homegrown and Sprinkles are a little behind us. They did not make it as far as us yesterday. I'm sure they will catch up soon.
The hike up Muir Pass was more difficult than I thought it was going to be. Maneuvering through snow, ice, snow bridges, fields of talus, and running water is very time consuming. 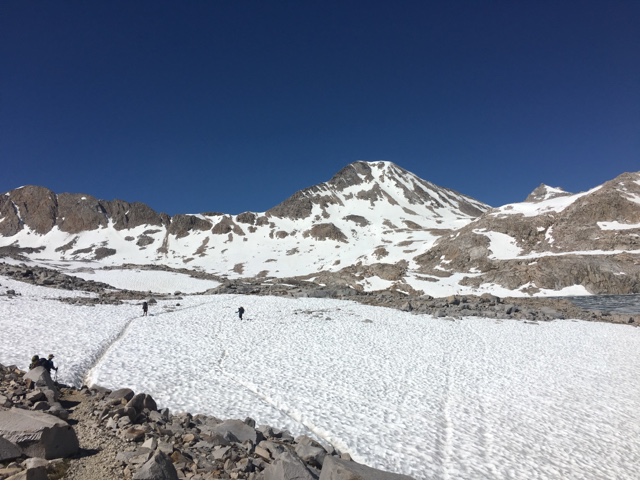 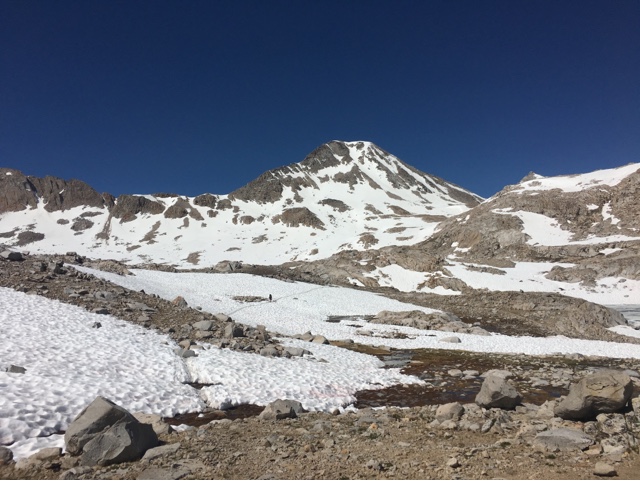 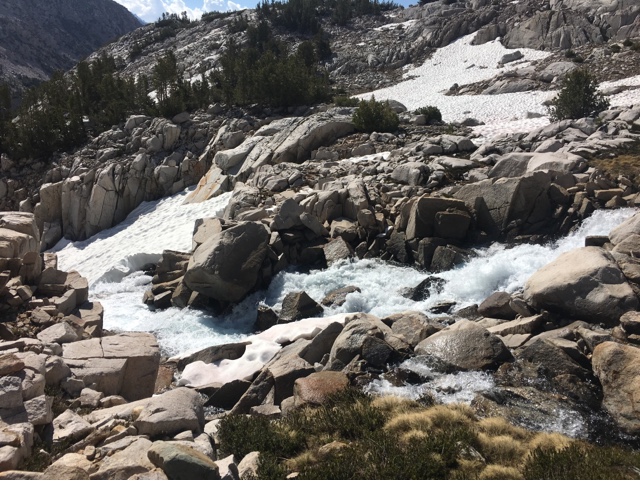 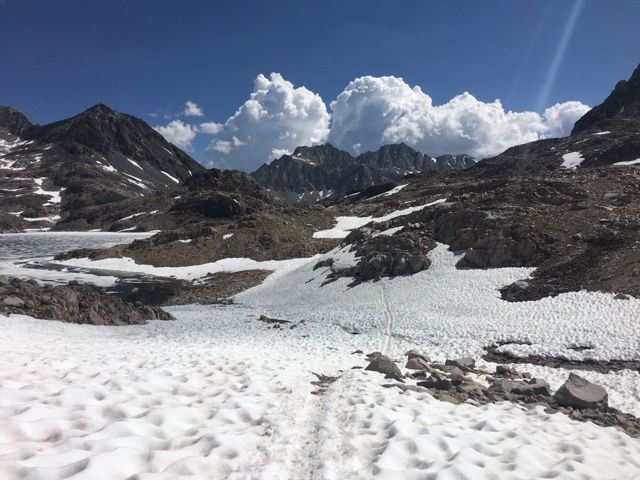 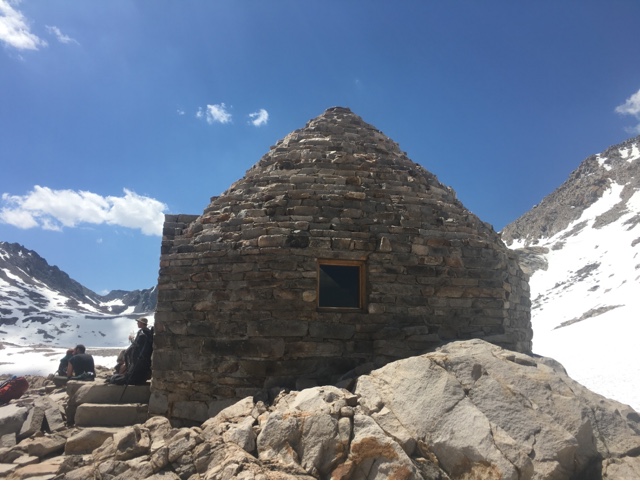 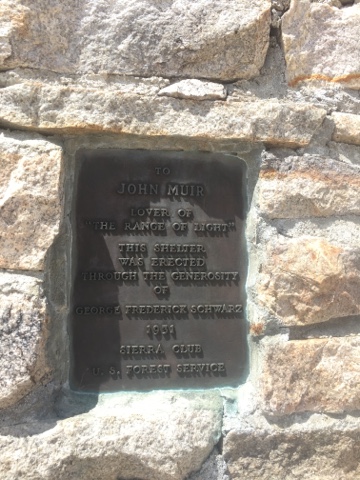 We stayed at the top for a long break. I took off my socks and shoes in hopes that they would dry before the trip down. They did dry, but I shouldn't have bothered. The trip down was through a lot more snow and the trail was more like a river than a pathway. 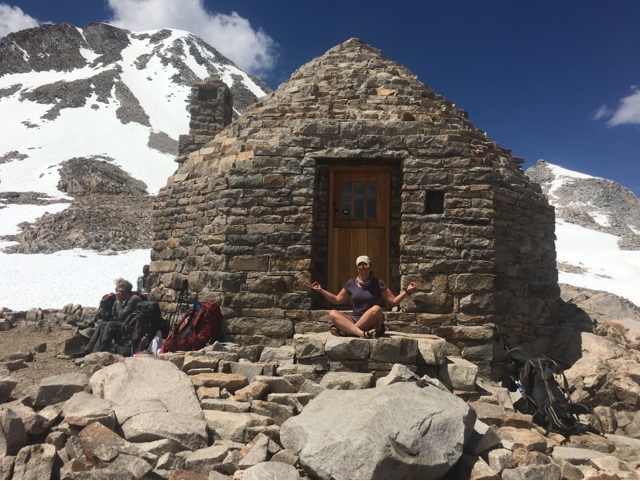 Great view of the frozen lakes
We hustled down from the summit as quick as we could. We could see storm clouds building and we wanted to make it down to a lower elevation. The terrain was very technical and took much longer to make miles than we are used to. Luckily, the storm clouds drifted away from us and danger was averted. 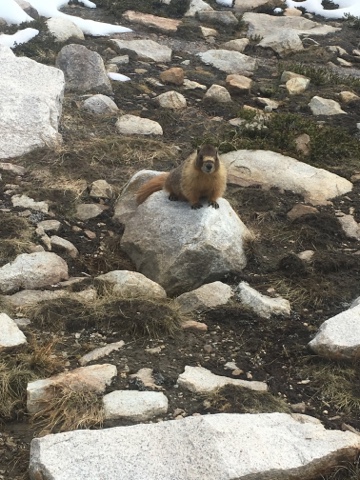 Marmots are everywhere out here 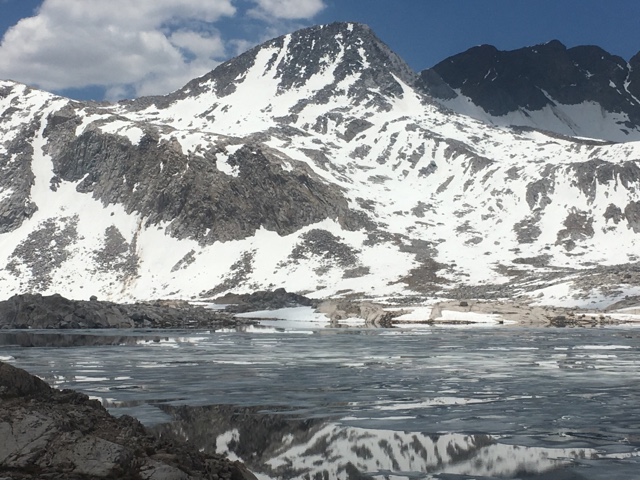 Great representation of my view for the day
Once we were sure that we had outrun the weather, we stopped for lunch on the banks of Evolution Lake. The sun was shining brilliantly and we once again tried to dry out our socks and shoes. After lunch we hiked by ourselves for the rest of the day. The dangerous section was done and I think everyone enjoys hiking by themselves, I know I do. The last eight miles went by quickly. I'm currently listening to Harry Potter and the Chamber of Secrets. I just love the guy who is narrating it. I was amused all afternoon long. 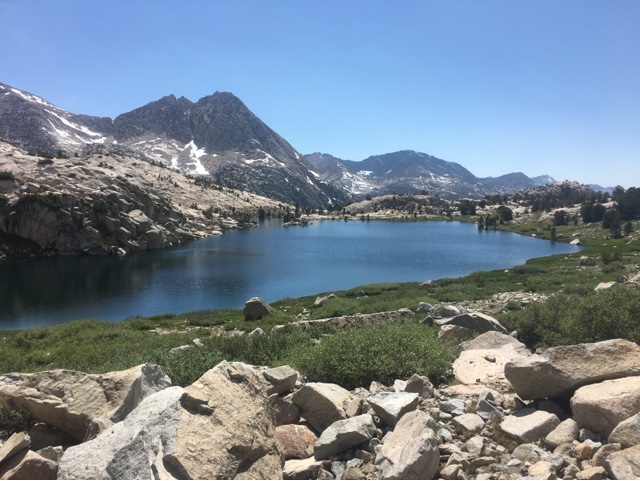 Second part of the day
Our plan for the evening was to camp just before the crossing of Evolution Creek. Evolution can be a really nasty and dangerous crossing. It is recommended to do it first thing in the morning when it is at its lowest and slowest. There is even an alternative route around it in case it isn't passable. When we got to our planned campsite it was already full of people. We thought that there might be camping on the banks of Evolution so we went a little farther. There was camping, but it was on the other side of the creek. Doh!!! It didn't look to dangerous to me, so I decided to test it out. If the water came up above my waist or the current was too strong I would turn around and we would find a different place to camp. The water was cold, but it wasn't moving extremely fast, nor was it extremely deep. It was definitely cross able, I just had to take my time and make sure my feet were secure. 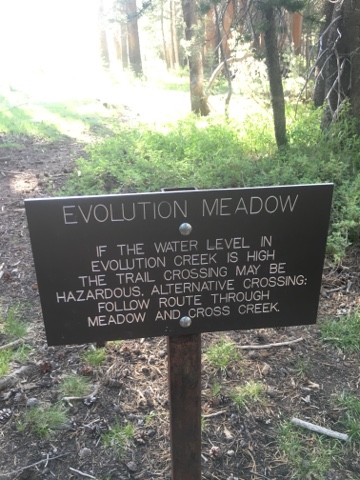 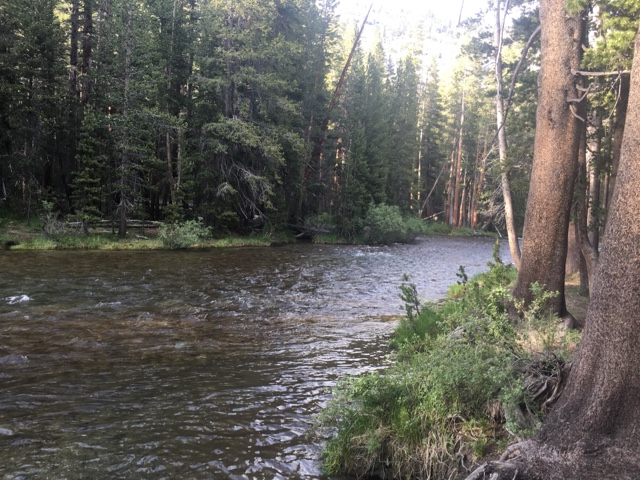 Evolution Creek
Since we got that out of the way tonight I'm going to celebrate and sleep in a little tomorrow. We might be done with all of the "major" passes, but that doesn't mean things will be any easier. As always I'm excited to see what tomorrow brings.
"Anyhow we never know where we must go, nor what guides we are to get---people,storms, guardian angels, or sheep...."
-John Muir
Posted by Yoda at 12:42 AM