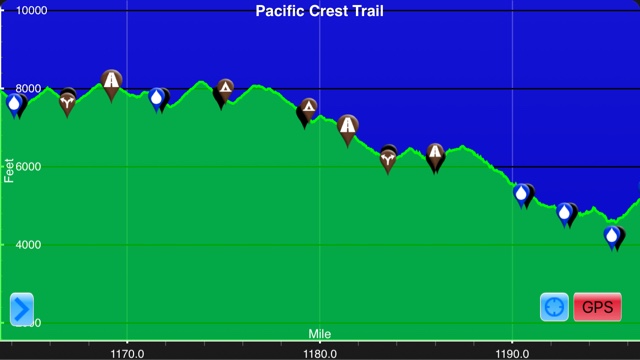 Total up/down: +3906/-6879
I woke up today and was on a mission. I really wanted to make it into Sierra City by the end of the day. I have two resupply boxes going to the country store there, one with food and the other has new shoes. I really, really need the shoes. My Solomons are completely shot, which is disappointing. I only got 500 miles out of them. My first pair made it 700 miles. I guess the Sierra took its toll on on them. I'm switching from Solomons to Altras. I'd say ninety percent of hikers are wearing the Altra Lone Peaks this hiking season. Everyone seems to love the big toe box and zero drop heel. They are significantly lighter than the Solomons. I really hope they work out. I needed to hike thirty one miles to make it in to town and I wasn't exactly sure when the store closes. I had information that said it closed anywhere from five to eight o'clock. My goal was to make it there by six o'clock. I've fallen short of my last few daily goals, so I figured why not go even bigger. I woke up later than I had planned on. It wasn't exactly a great way to start my day. I didn't start hiking until six thirty. So I had less than twelve hours to hike 31 miles. I needed to average 2.7 mph. Yikes, I usually average 2-2.5 mph with breaks. This was going to be a tough goal to meet. 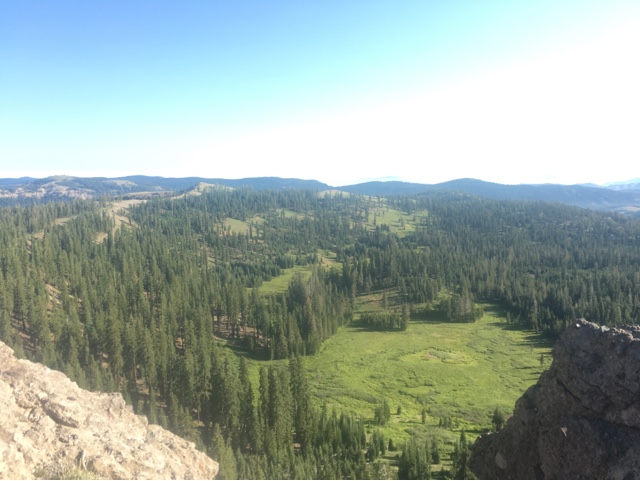 At first I thought this was a golf course, it was not
I was determined to hike for four hours without stopping to take a break. Over the first three hours I kept up a 3 mph pace. It was quickly warming up and I thought there was a water source at the ten mile mark. I decided to take my first break at the water source, but when I got there I discovered that I was wrong. The water was still 5.5 miles away. Doh! I really need to pay better attention to my water sources in the future. I only had three quarters of a liter left. I ended up hiking for five hours without a break and I kept up a 3 mph pace. I had hiked 15 miles in five hours, all before noon. I took a thirty minute break at the water. I was tired, but I still felt good.

Brief ridgeline walk
The terrain was perfect for a high mileage day. I didn't have any big climbs or descents for the first part of the day. When I was taking my break another hiker gave me some Gatorade powder and I felt really well hydrated. I was hopeful that I could make my goal. Over the next two and a half hours I managed to keep up a 3 mph pace. I'm still not sure how I did it. I wasn't listening to music or an audiobook. I just got lost in my thoughts. Eventually I started to get bored, but I didn't want to distract myself. I ended up turning the first novel of the Game of Thrones books into a fairytale. I did it from Sansa's perspective. It was a fun game to play and I was able to lose myself in the story. Around the twenty seven mile mark I was really starting to drag. My feet were absolutely killing me. My shoes have so many holes in them that they were letting in tiny rocks and tons of dirt. I had to stop twice to clean my feet and treat a few hot spots. The heat was also becoming unbearable. I dropped a few thousand feet of elevation and I was roasting as I descended. 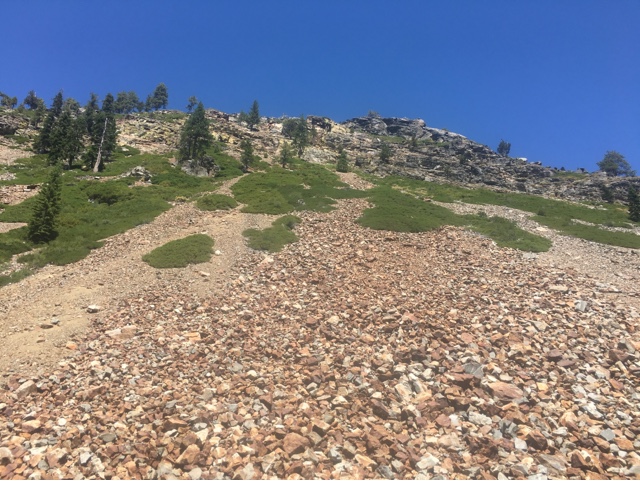 Very hot in the canyon
Every time I wanted to take a break I would look at my watch and decide that I couldn't afford to lose the time. With only four miles left I wasn't sure I could make it. Then I would remember that the store I sent my boxes to has milkshakes and hamburgers. If I could make it before they closed I would be in heaven. I squared my shoulders, lifted my chin, and pressed on. I stumbled out of the woods and onto the road at 6:15. I had done it! I had just hiked an ultramarathon. It was by far my highest mileage day on the pct. I only hiked 31 miles once on the AT and it was my third to last day on the trail.
Sierra City is located 1.5 miles away from the trail. There was no way that I was going to walk it. I decided to hitchhike. Just as I was walking across the road a car pulled over and let out a few hikers returning to the trail. I hopefully asked if they were returning to town. The said they were not and I thanked them and stuck my thumb out to hitch a ride. I must have looked pretty dejected because the next thing I knew they honked their horn at me and told me to hop in. It was only five minutes out of their way, but it would have taken me thirty minutes to walk it. Amazing!!! That might be the best trail magic I have ever gotten. They dropped me off at the store minutes before it closed for the evening. I picked up my package and got my hamburger and milkshake. The burger was half a pound of deliciousness and the milkshake was coffee and caramel heaven.
I had a few friends in town and I sat down with them to eat. They filled me in on what the town had to offer. It wasn't much, but it was exactly what I needed. The visitors center had a free shower, although it was ice cold(I mean like jumping into an Arctic lake kind of cold). The church next door allows hikers to camp on their property for free. The only thing that was missing was a place to do laundry. Even that worked out in the end. Wolf caught up to me just before dark. He came staggering into town looking very haggard. He had hiked a 37 mile day. He ended up staying at a resort which offered laundry. I was able to provide the detergent and he snuck my clothes in with his. Score!
I went to bed clean, full, and personally satisfied. I don't think I can do this everyday, but my self confidence has been restored. It is amazing what one can accomplish when you set your mind to it.
"There's strong data that, within companies, the No. 1 reason for ethical violations is the pressure to meet expectations, sometimes unrealistic expectations."
- Stephen Covey
Posted by Yoda at 8:21 AM