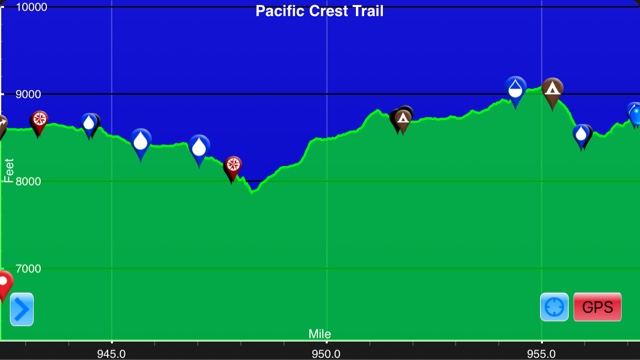 Since my knee has been misbehaving the last five days I had to make another difficult choice this morning. I chose to head off on my own, without The Wolfpack. It stinks because we were just reunited yesterday. When I left this morning I had zero confidence in my ability to make miles. Everyone else was taking a zero day and I figured I would only be able to hike between five to eight miles. My theory was that if I left before them and hiked a short day they would catch me within a day or two. As it turned out I hiked farther than I thought I could. I also started to run the numbers and if I want to make it into South Lake Tahoe for my birthday on July 22 I have to hike at least fifteen miles per day.
I was up really early this morning because three older gentleman decided to cook and eat breakfast less than five feet away from my tent at five o'clock this morning. I tried unsuccessfully to go back to sleep. It was cold out so I stayed in my sleeping bag until six thirty. Finally I couldn't sit still any longer. I packed up my things and spent awhile rearranging my food in my bear can. When I went to the bathroom I saw that Sprinkles nieces and nephews were up and running around. I figured the adults were probably up as well so I took all of my things down to where they were camped. Outro and U-Turn had already left to catch the bus into Yosemite Valley so I didn't get to say goodbye to them. I had breakfast with Sprinkles, Evac, and Trinka. Papa Sprinkles cooked chorizo burritos for us again and they were just as delicious as yesterday. Second Dinner and Tye Dye went to the camp store for coffee so I had them take my battery pack with them so I could fully charge it before I headed out. Half of Sprinkles family was leaving as well and since Outro and U-Turn were set up on their area, Evac and I had to pack up and move their stuff. I spent the rest of the morning playing with the kids and talking to Evac. Eventually it was time for me to say goodbye and get moving.
I walked down to the store to retrieve my battery pack and hit the trail shortly after eleven o'clock. The first two miles were very easy and there were a lot of day hikers around. The hike out had a few informational signs that I stopped to look at. There was some good info on how glaciers helped to shape Yosemite. 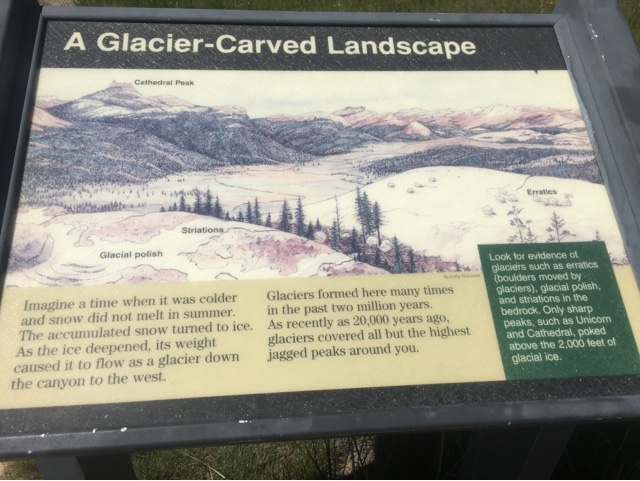 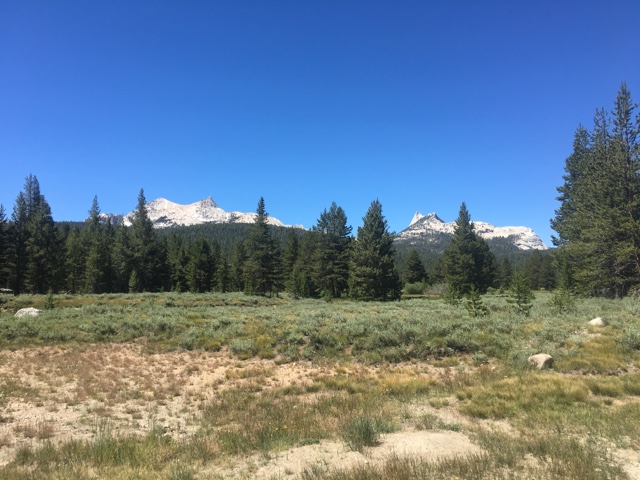 Unicorn Peak(Left) Cathedral Peak(right)
As I hiked I was surprised by how good my knee was feeling. It wasn't hurting at all. I continued to go slow so I wouldn't aggravate it further. The first five miles were relatively flat and I cruised right along. I was worried about the upcoming downhill section. My knee doesn't usually hurt while I'm going uphill. It would be the downhill portions of the day that would be the true test. 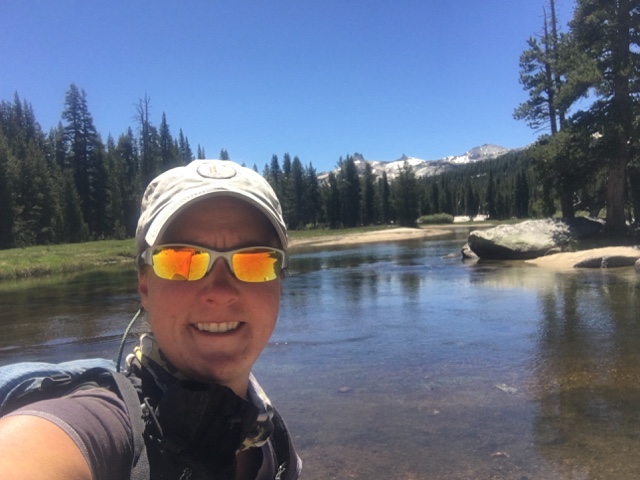 Delaney Creek with Cathedral Peak in the distance(Delaney Creek was named by John Muir for Pat Delaney who traveled with Muir to the Sierra in 1869)
The first part of the downhill section was tricky. It consisted of going down over a cobblestone like steep grade. For some unknown reason the trail maintainers are using small and large rocks to "pave" the trail. I'm sure there is a very good reason for this, but I have no idea what it is. I did see two trail crews working on it and it didn't occur to me to ask them. 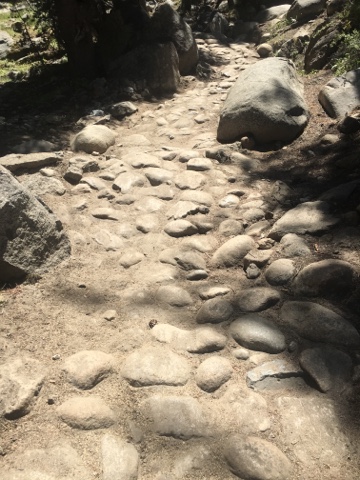 Rock cobblestone madness
I hiked past several horse/mule trains. There are several High Sierra camps in the area and I figure they must have been resupplying the camps. I always enjoy seeing the pack animals. It amazes me how sure-footed they are. 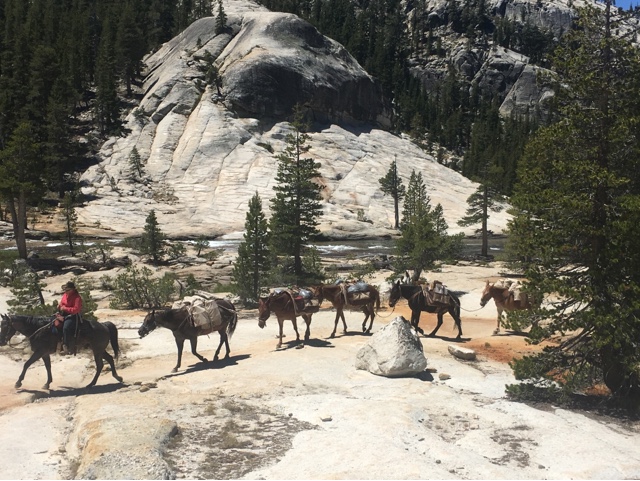 One of the bigger groups of pack animals
The downhill section didn't last long and I'm happy to report that my knee held up pretty well. It still hurt, but not as badly as I feared. I decided to hike as long as my body told me too. I had already surpassed my low goal of five miles for the day and I was almost at my high goal of eight miles.
I found an excellent place to stop and have lunch. I even got to soak my feet and knees while I ate. The Tuolumne River was really cool. There was a beautifully built bridge across it as well. 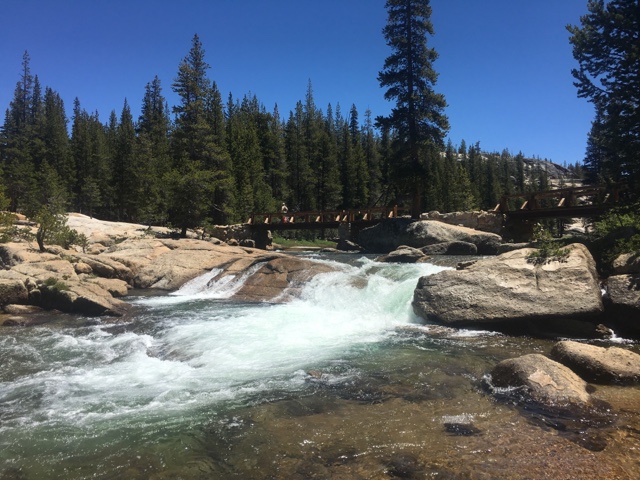 Tuolumne River
This is what I pictured when I imagined what Yosemite would look like. Shortly after my lunch spot the river spilled over a granite peak to form a breathtaking fifty foot waterfall. 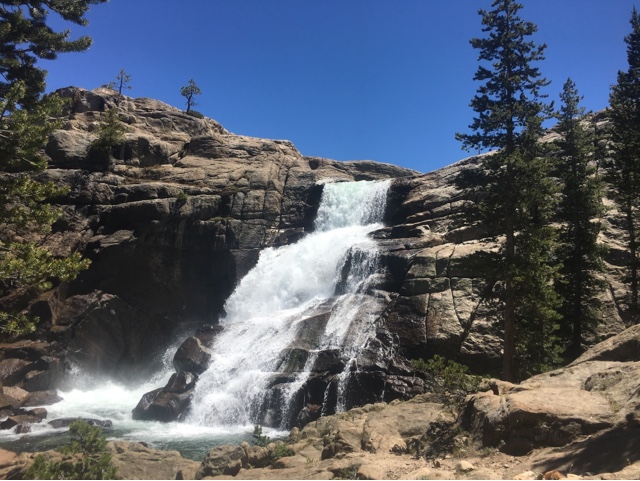 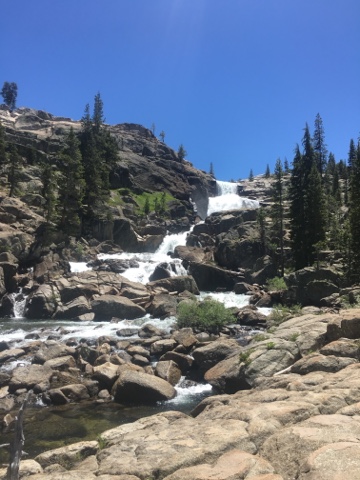 Complete view of the falls
I made it through roughly ten miles without my knee bothering me too much. Surprisingly it wasn't the downhill part of the day that got to me, it was the super flat section. I think I just pushed myself too hard. The trail went through a beautiful meadow and it was easy hiking, which lead to me hiking too fast. 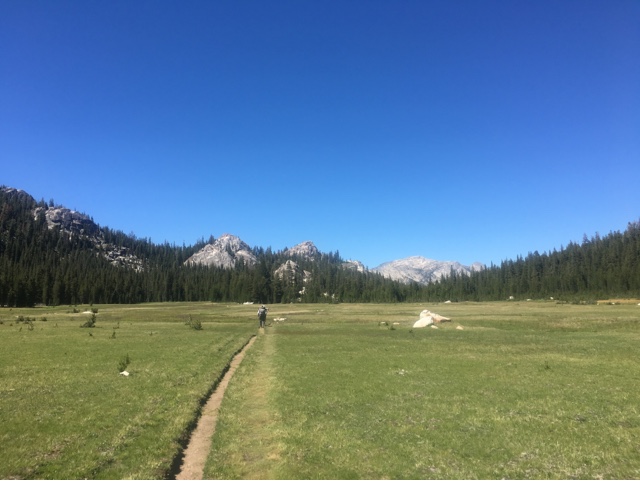 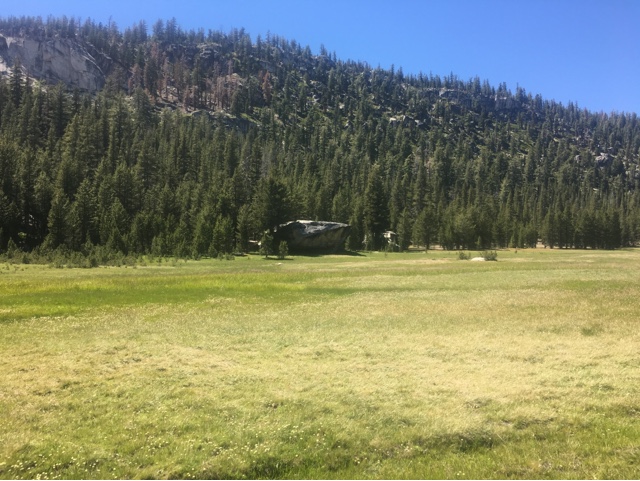 Large granite boulder deposited there millions of years ago by receding glacier
At the end of the meadow I had a short, but brutal down. By this point was knee was acting up again and I was looking forward to getting into camp. As it always happens, just before camp, I had a river crossing to do. Since there was no dry way across I had to take off my socks and shoes. Afterwards I decided to hike the final 1.1 miles in my Luna sandals. It was a great decision because I had another crossing to do immediately before camp. Even with the late start I made it into camp by five thirty. I am camping with ten thousand of my best friends, mosquitos. I hurriedly set up my tent, put on long sleeves and pants, and broke out my bug headnet. Tomorrow looks like a brutal day with a lot of elevation gain and loss. Hopefully my knee continues to behave.
"When one is alone at night in the depths of these woods, the stillness is at once awful and sublime. Every leaf seems to speak.“
- John of the Mountains: The Unpublished Journals of John Muir, 1938
Posted by Yoda at 1:50 PM