NOC(137.3) to Undesignated Camp Spot (151.4) 14.1
According to past thru-hikers, today's climb out of the NOC is one of the 7 hardest climbs of the entire trail. It absolutely lived up to legend. 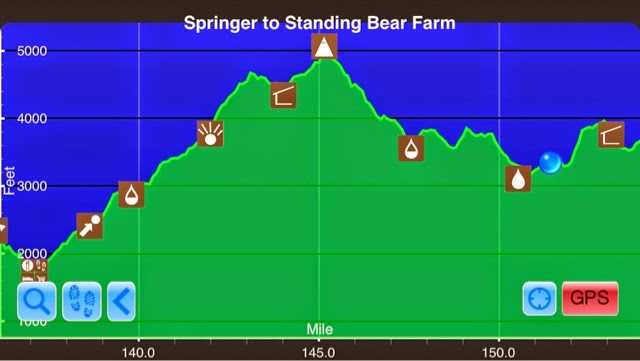 Started at bottom left, ended at blue dot
I was thinking of taking a zero day at the NOC, but with the forecasted rain I decided to push on. Supposedly it rained pretty hard over night, but I slept right through it. The only evidence of bad storms I saw, was flooding all around my hammock site. Just another reason I'm glad to be hanging in the trees. As I was getting ready to get up it started raining again, so I layed in my hammock and read some of my book. Around 9, it finally quit and as I was heading to the bathroom, Advil invited me to breakfast. I dined with, Advil, Harry Potter, Kansas(older lady from Carey,NC), Bee man(commercial bee keeper), and TMI(a girl around my age). It was a fun breakfast. I'm finally starting to get an appetite. I had 3 eggs over easy, sausage, home style fries, a biscuit, and French toast. I ate almost all of it. As I arrived back at my campsite I was told repeatedly that I couldn't camp there. I apologized and told the guy that someone gave me permission. He just kept telling me I couldn't be there. Since I was packing up I couldn't see the big deal.
I hit the trail around 10:30, which is really late for me. I wasn't really looking forward to the extended climb and it started raining again as I set out. The first part of the climb didn't feel so bad. I was all jacked up from my big breakfast and feeling good. Then the 100% humidity kicked in. You would think being from Florida would be an advantage, but I don't respond well to it.
Once again, my promised "epic" views were sub par due to the rain. 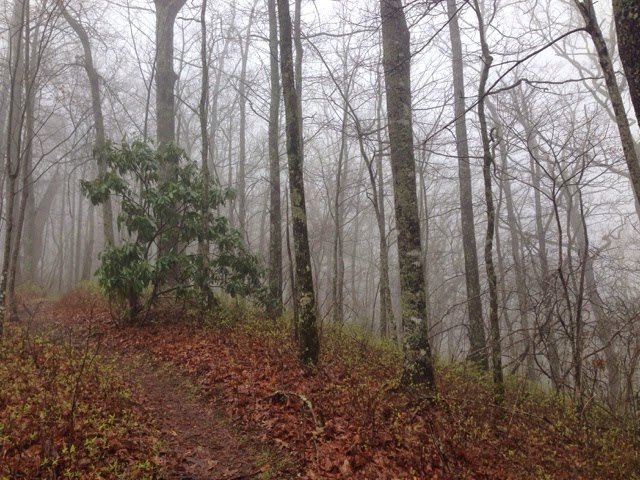 All I've seen for days
I did come across a pretty cool memorial in the middle of nowhere. It's been there since 1968. Hikers leave a little something behind to pay tribute. I've been carrying a nickle around since my 3rd day, so I left it. The memorial was for a man named Sutton. He was a forestry service member who died fighting a fire. 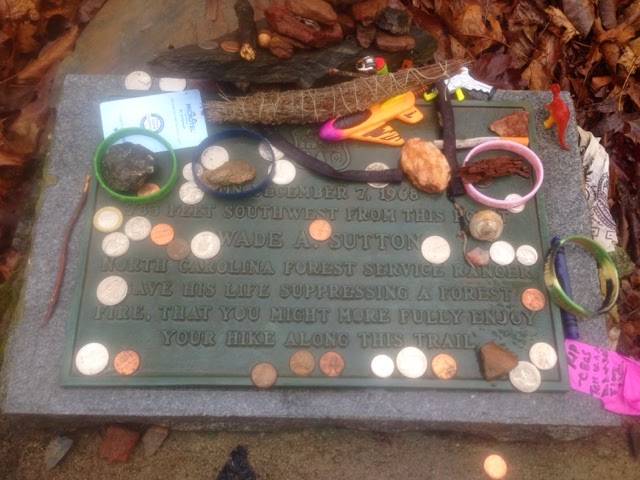 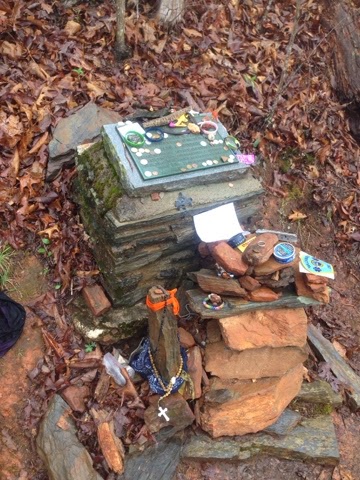 Not pictured is a can of PBR someone left. There was also a wawa gas card
If I wasn't climbing straight uphill, through the mud, I was going downhill across sketchy boulder fields. 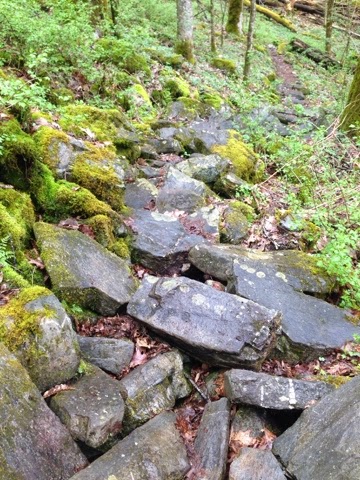 I was trying for a big mile day, to put me closer to Fontana Dam, but the deck seemed to be stacked against me. Between the really late start and the quad--busting climbs, I didn't think I would hit my daily goal. It was the first time on the trail that I wouldn't hit a goal I'd set out for. I switched from listening to my audio book and put music on. I cranked out a very difficult 3.8 miles and hit my goal, but I broke one of my rules to do so. I have this silly rule about always stopping with 2 hours of daylight left. I didn't stop today until 45 minutes before dark. I barely had enough time to setup camp and cook dinner.
I ended up camping with 2 people I just met, another thing I don't like to do, but I feel reasonably safe. Boots and Wannabe are a father and son from New Hampshire. I've heard of them before, but we haven't crossed paths. They started 1 day after me and seem to crank out miles. We enjoyed a nice dinner around a roaring campfire that Wannabe(the dad) got going. It's pretty rare that thru-hikers take the time to start campfires, but I really appreciated it with the darkness closing in and camp chores still needing to be done.
Tomorrow should be another tough day. I get to start off climbing, Jacobs Ladder. A really hellacious climb of 600 feet over .6 miles, with no switchbacks. Sometimes I think the AT route planners are sadistic. Lots of times, we climb mountains only to go back down .1 miles from a summit. Or we climb a 1,000 feet only to drop down 1,500 feet only to immediately climb and 1,700 feet. I'm sure there is a reason for their madness, but I don't see it. 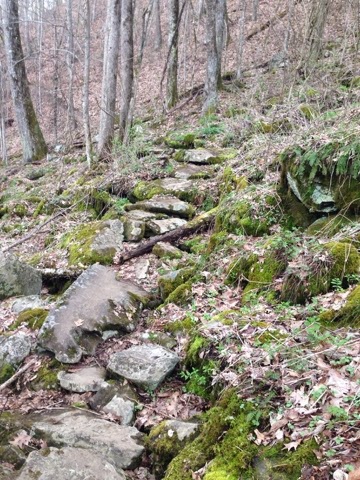 Boulder field I had to cross, perfectly good trail locations to the left and right
“I shall be telling this with a sigh, somewhere ages and ages hence,” Robert Frost
Posted by Yoda at 7:49 PM