Day 18- Momma Told Me There'd Be Days Like This

Double Springs Gap Shelter(196.5) Clingman's Dome Visitor Center(199.4) 3.1
An unexpected Nero in Cherokee, NC. Last night I spent a very wet night in a damp sleeping bag and hammock. We had pretty severe weather overnight and throughout the day. I had planned to hike 7.5 miles to the next shelter, but Mother Nature had other plans. I teamed up in the morning with HVAC and Lorax, a retired couple from Helena, Montana. We didn't leave the shelter until 10, because of lightning and thunder. The temperature hovered around 55 with 20-30 mph winds. Within minutes of setting out I was soaked from the waist down. I decided on hiking without rain pants, I'm not really sure why. The trail was more like a stream than a footpath. I decided on sure footing instead of hopping around in a fruitless attempt to keep my feet dry. Most of the walk was through a beautiful spruce forest, but I couldn't take any pictures because I didn't want to ruin my camera. About a quarter of the hike was on an exposed ridgeline that left me soaked to the bone and shivering. It took us 2 hours to walk the 3.1 miles to the Visitors Center. I usually hike that in a little over an hour. Like I said earlier, I had planned to hike on, but HVAC, a retired family practice doctor, didn't think that was a good idea. I was probably a little hypothermic, with little chance to warm up given the conditions. We called for a shuttle to Gaitlinburg, but nobody picked up. The best we could manage was a cab ride to Cherokee. As we waited for the cab we stood in a bathroom to stay out of the wind. I was shivering so bad, they sent me back to the visitors center to wait. Once the cab came, Lorax walked up to get me. It was nice to have such great people looking out for me.
We split the cab with another retired couple, Putt-Putt and Tumbles. Once we arrived in Cherokee we discovered only 1 hotel had vacancy, apparently the World Cup of Poker is in town. The motel we are at only had 2 rooms available. Lorax and HVAC were kind enough to allow me to share their room. We were able to take showers and the motel did our laundry for us. Then HVAC went on a beer run, the day was looking up already. All of us went for dinner at an all-you-can-eat(AYCE) Chinese buffet. I think I had 3 plates of food. Then we went to a grocery store to resupply. I had planned on making it through the Smokies without resupply, so I only bought a few snickers bars and fresh ziplock bags. I'm currently laying in a real bed, with a full tummy and dry clothes. The only way this day could be better is if this motel had HBO for Game of Thrones. It's funny how earlier today I was miserable and near tears, but now I'm full and happy. I only got 1 picture today, but it was perfect. 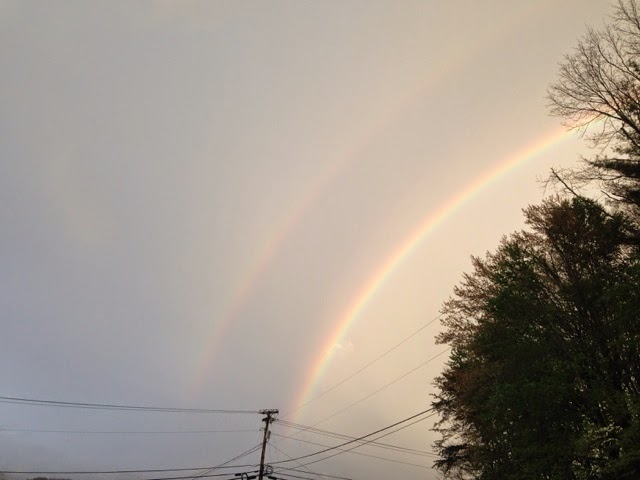 View from the motel
Hopefully tomorrow will be better, but more rain is forecasted. I'll be happy if it holds off until after Clingman's Dome. I'd really like to see the view.
"People often say that motivation doesn’t last. Well, neither does bathing.  That’s why we recommend it daily." Zig Ziglar
Posted by Yoda at 7:12 PM