Fontana Dam(164.7)
It was a dam good day, but I can't believe how fast it went by. Fontana village is a neat little tourist town. It is a resort that consists of a few restaurants, stores, cabins, camping and hotel rooms. You can definitely tell that it's their off-season. The guests are mainly hikers and car enthusiasts. There is a Volkswagon convention going on right now, with about 75 cars and drivers. There is a stretch of road called, Dragons Tooth, that they all come to drive.
My day was action packed as usual. There is always so much to get done and so little time. I slept in until 8:30, then started sorting my mail drop, which consisted of enough food to get me through Great Smoky Mountain National Park(GSMNP). I sent myself way too much food. I had originally planned on taking 7 days to get through, now it looks like I'll be done in 5. I took the extra food and mailed it to the next town I'll hit. I also had to send REI my old shoes, since they sent me replacements. I do not envy the person who has to open that package. After I finished up at the post office, I went to breakfast. It was delicious. I ordered the giant breakfast burrito with hash browns. The server informed me that the burrito had hash browns in it. I promptly replied, "I know that, I just like hash browns." After filling up, I went to the general store to get some pop tarts and cliff bars. I was looking forward to getting a milkshake, but the ice cream parlor hasn't opened for the season yet. Then I had a nice long conversation with my Aunt Liz. She had lots of questions about my journey and I was happy to chat about trail life with her, but I missed talking to my Uncle Tom. I look forward to chatting with him next time. They very generously paid for my hotel room for my entire stay at Fontana Dam. Thanks Aunt Liz and Uncle Tom. It's great to know that I have such great family supporting my trek. I spent the rest of the day going through food and gear. My hammock repair looks to be top notch and I'm anxious to see how it's going to hold up. 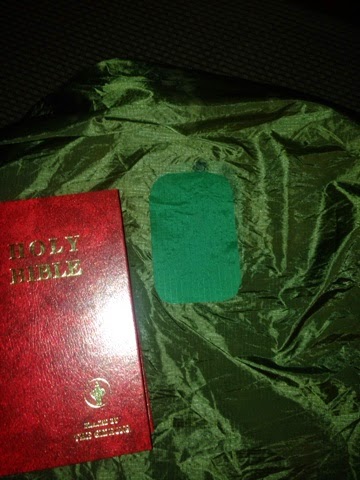 I used a bible to hold it until the glue set
Figured I could use all the help I can get
I was able to borrow a nice gentlemans laptop in the lobby to watch the new Star Wars trailer that was released today. I can't wait until Christmas to go see it. Thanks to Kyle and Alie, I was also able to watch the Game of Thrones premier. They let me use their HBO Go login. It was everything I hoped it would be. Alie just recently watched Star Wars for the first time. She included a nice card in my food drop she sent, with not only a Harry Potter quote, but also her own Yoda quote. It was a nice surprise to get a card from them, since I packed and sealed the food drop before I left. 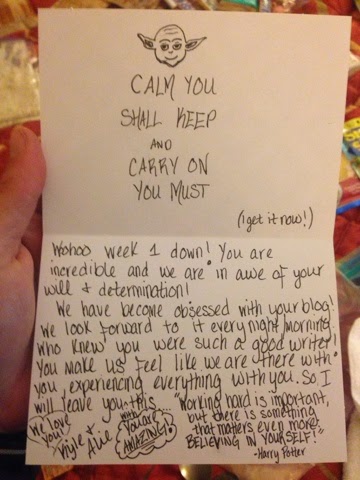 I really appreciate the little things out here. I've enjoyed meeting so many new people and I'm always around them, but at the end of the day I'm doing this on my own. Sometimes I feel very isolated, but it makes me appreciate my friends and family so much more. Keep all the great comments and emails up. They really make my day. I enjoy sharing this experience with each and every one of you. I still can't believe you all want to read this thing, but it's nice to know people are enjoying it.
I'm excited to be starting the Smokies tomorrow, I just wish the weather was better. It's going to rain off and on tomorrow and Saturday with heavy rain on Sunday. That is disappointing because Sunday I summit Clingman's Dome, which is the highest point of the entire trail. I might be mistaken, but I think it's the highest point on the east coast. I'm hoping the weather people have it wrong and I can get a view. 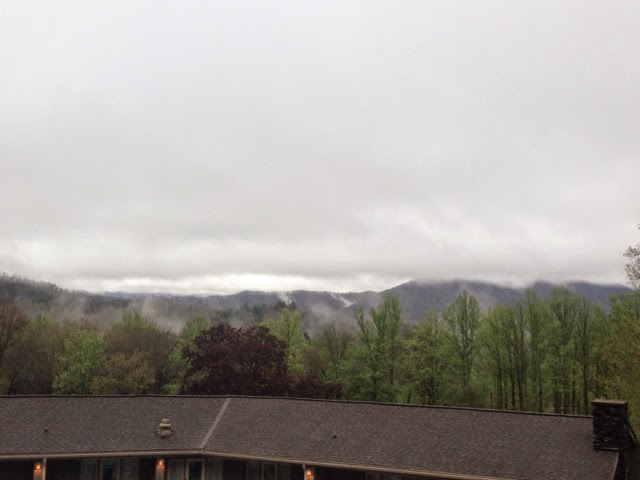 View of the Smokies from the lodge
I've been working on a slideshow of all of my pictures to date, but I can't get it to load on here. Hopefully I'll figure it out soon.
"There’s as much ascent (and, sadly, descent) on the AT in total (526,664 feet) as tackling 29,035′ Mount Everest over 18 times starting at sea level. To thru-hike the AT you therefore have to go up and down Mount Everest once every 8-9 days" Unknown
Posted by Yoda at 7:39 PM