June 04, 2016
Casa De Luna(478.4) to Upper Shake Campground(493.4) Detour miles 12.3 Miles
We finally broke free from the trail angel vortex this morning. The group consensus was to wait until after coffee and pancakes before heading back out to the trail. Breakfast wasn't served until 6:20 am so we had a later start than I would have liked. This was the last known fire detour of the trail. We might have others come up as we go along, but today's detour was from a fire in 2013. We spent almost the entire time road walking. For a road walk it wasn't too bad. There was a decent sized shoulder to walk on for most of the day. 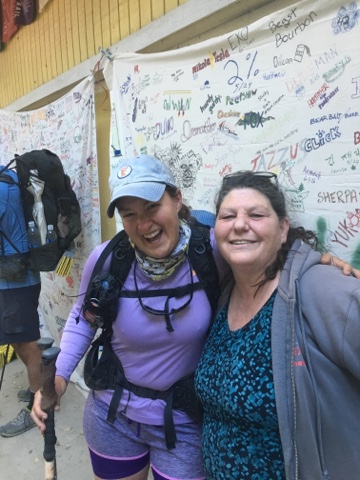 Terri grabbing my butt
Casa De Luna was two miles off of the trail so we walked down to the highway to hitch a ride. This proved to be troublesome because we had seven people in our group. It was Sprinkles, Homegrown, Evac, Uturn, Outro, Hot Tamale, and myself. For a moment it looked like we had gotten lucky when a Suburban pulled over. Unfortunately, it could only hold four of us. Homegrown, Sprinkles, and I decided to walk a little farther down the road and try our luck there. Within five minutes one of Terri's neighbors drove up and offered us a ride. Yesterday the same neighbor had brought over all of the leftovers from his daughters high school graduation party. We feasted on chocolate mousse cake, sandwhiches, potato salad, and chips.
Outro, Evac, Uturn and Hot Tamale had waited for us at the trailhead. We decided to group together for the road walk, safety in numbers. Our destination was a restaurant 5.8 miles away. We figured we could grab something to eat, get water, and wait out the heat of the day there. 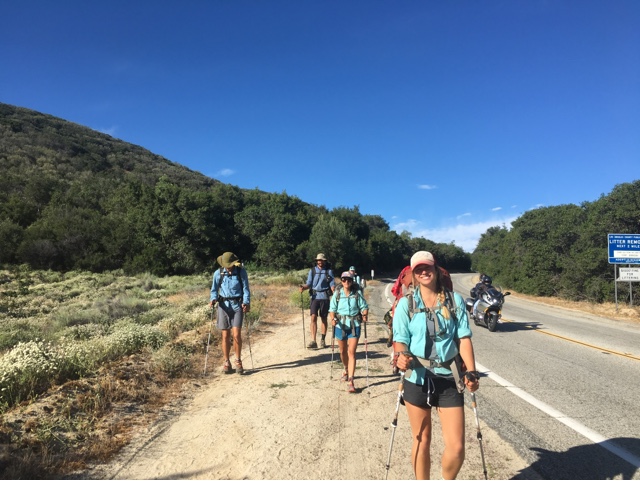 Evac, Sprinkles, Uturn, and Homegrown
We made it to the restaurant, without incident, in just under two hours. Everyone found a place on the patio to drop our packs before we rushed inside for food. Although they were only serving breakfast at that point, the server agreed to let us order off of the lunch menu as well. Evac and I had a Bloody Mary and split a few appetizers. 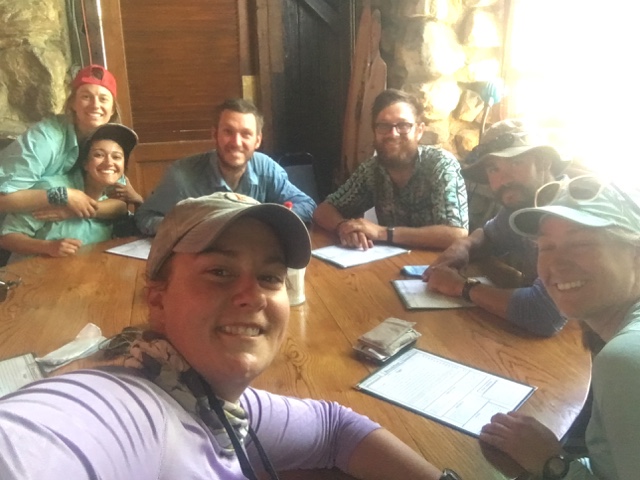 Me, Outro, Uturn, Wolf, Homegrown, Sprinkles, and Evac
We stayed at the restaurant until one o'clock. When they began to fill up for lunch we decided to go out and find a place in the shade so the server could have our table. I went to the convenience store and bought a Gatorade, Homegrown and Uturn bought a few beers, and we walked to an old RV park on the lake.
The lake dried up several years ago and the RV parks business rapidly declined. It all had a very eerie feel to it. We pushed a few picnic tables together and lounged in the shade. Eventually everyone tried to lay down and take a nap. I just can't seem to nap out here, it is just to hot. When I finally got too bored to just lay there I walked out onto the dried up lake. I thought it would be a smooth layer of sand, but it actually resembled the desert floor. 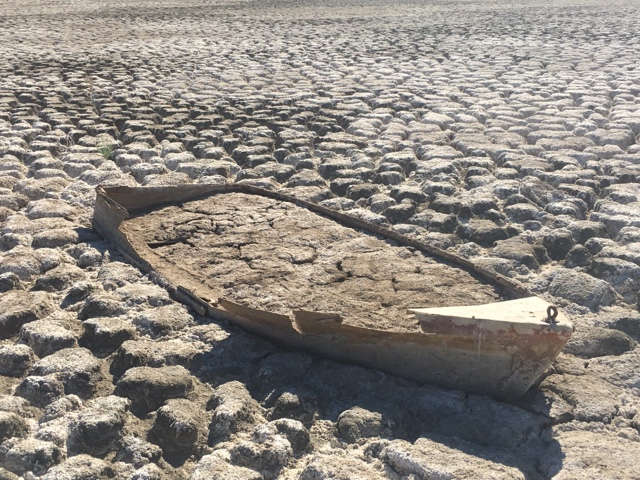 Crazy cool
We stayed at the lake until six o'clock. By then it had cooled down enough for us to finish up the road walk. We had about 4.5 miles of road left and then two miles of nonpct trail. We had hoped to hike a few more miles on top of that, but time ran out on us. We got to a campground where the pct starts back up after the closure, but it was getting late. By the time we had found the water source and filtered some it was after nine o'clock. Nobody felt like hiking late and getting up early for a twenty four mile day tomorrow. We decided to call it a night and camp there. It actuality it wasn't a true campground, it was an abandoned car camping campground. Talk about creepy!!! The ground was really hard and I broke another tent stakes. This caused me to have a minor meltdown. I was so upset because I had ordered a few more tent stakes from zpacks for this very reason. Unfortunately, Zpacks messed up my order and sent me a tent stake sack instead. The crisis was short lived because Evac had an extra stake I borrowed. We cooked and ate a quick dinner before crawling into our tents. Dinner was a pretty miserable affair because of the large army of mosquitos that descended upon us.
The plan is to be up and on the trail by 4:30. We have twenty four miles to hike tomorrow to get into Hiker Town, our next stop. Everyone has resupply boxes there. It is our last stop before we hit the real desert. We will be hiking in the Mojave desert for the next 60-100 miles. I think my strategy is to primarily night hike and make as many miles as possible. I'm excited for this new challenge and a change of scenery from the high desert. 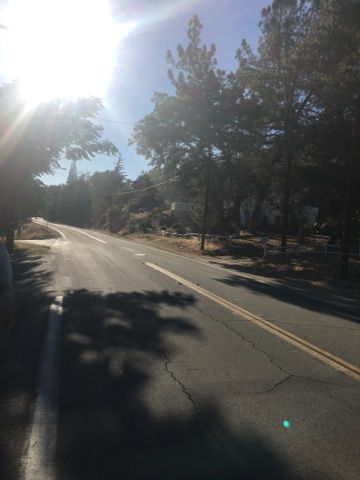 View from the road
"It isn’t the mountains ahead to climb that wear you out, it’s the pebble in your shoe.”
— Muhammad Ali
Posted by Yoda at 3:00 PM