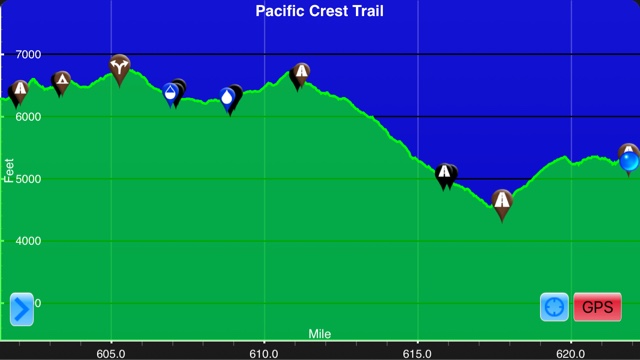 After crashing some miles yesterday I rewarded myself this morning by sleeping in. The fact that it was really cold also helped. It is harder to get going in the morning when it's cold outside. Just as I was leaving camp Evac, U-Turn, Amanda(now called Zuul), Homegrown, and Sprinkles all showed up. They had camped just short of me. As it turns out everyone had a record breaking day. The Wolf Pack crushed it. Outro and Wolf hit thirty miles and everyone else broke 25! 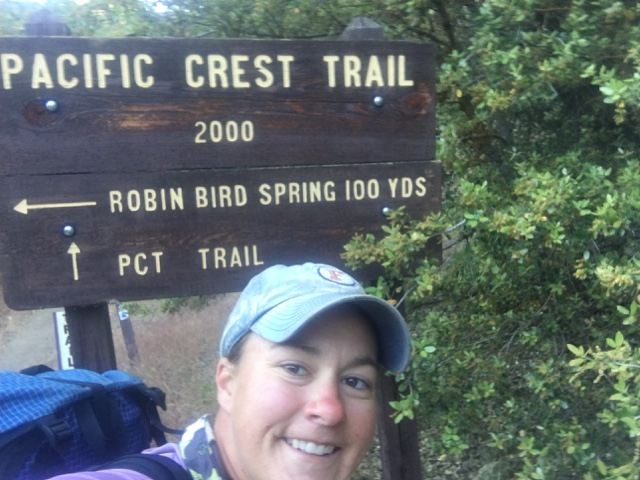 Only 2,060 miles to go
Today's hike was broken into short hikes between water sources. The last reliable source for 42 miles was seven miles from where I camped. I really enjoyed that section. It was nice rolling hills through a piney forest. It reminded me of Ocala National Forest in Florida. 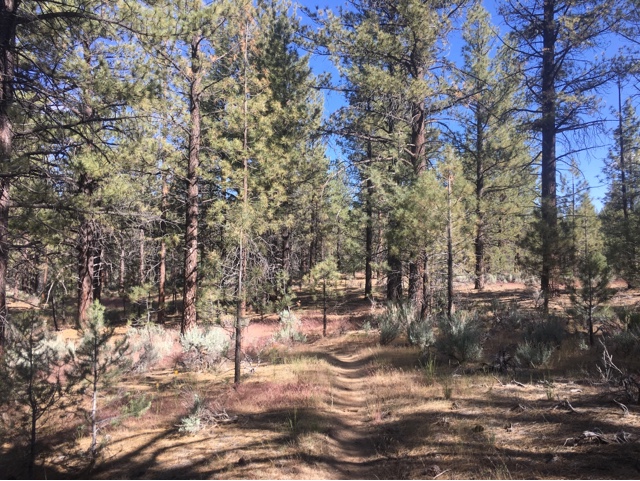 Pine tree forest
I was hoping the rest of the day would continue through this type of terrain, but I was in for a nasty surprise. At the water source I met two deputies from the Kerns County Sheriffs Department. They broke the news that I would be walking through the desert for the next twenty five miles. On a positive note they said there was a maintained water cache only six miles away. Unfortunately, those six miles felt like twenty. I was still worn out from yesterday and my feet were sore as well. 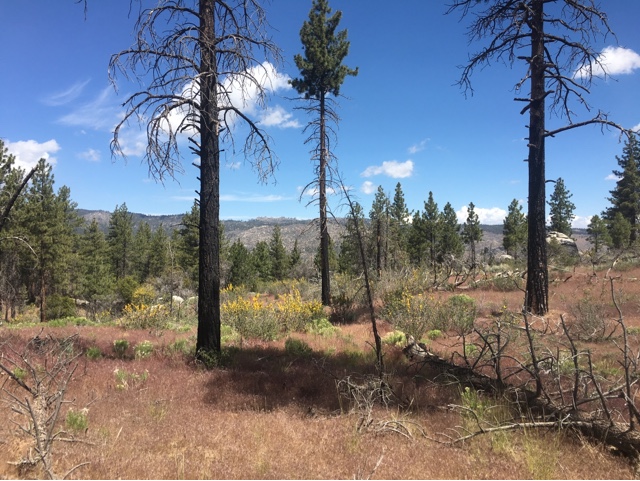 Terrain changing
As I got closer to the water cache I thought I could see Juicy and Hard Times, but this confused me because they are at least fifty miles ahead of me now. Sure enough when I got there it was them. They took a zero day and had access to a car so they came to bring me an ice cold soda! Hard Times and I have been texting back and forth about the water situation so he knew where I would be. It was crazy. I had just told Spooky that I hoped there would be trail magic at the water cache. Sorry, I forgot to get a picture. I hungout with them for awhile, but eventually they had to get back to town. I waited until four o'clock when it started to cool down before tackling the remaining miles to our water cache. 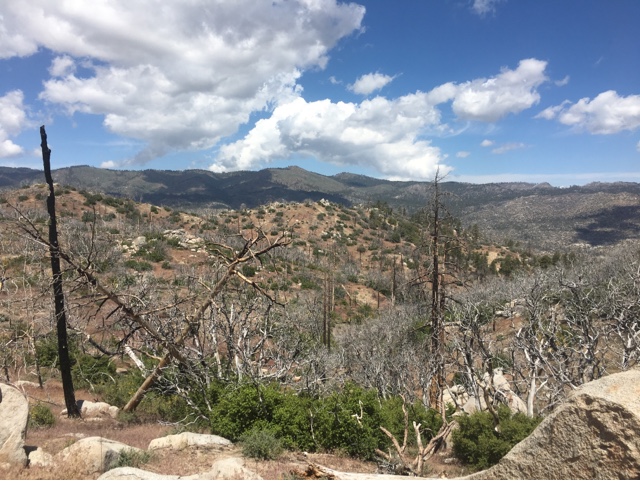 It just keeps getting bleaker and bleaker
I only had six more miles to hike before getting to the water cache Flamin Hot and Spaceman dropped for us. It was a lot of up and down through loose sand. I put on some music and kept my feet moving. The miles went by quickly and I was there by six o'clock. Outro and Wolf were ahead of me and easily found the cache right where it was supposed to be. The boys out did themselves. Not only did they leave us fifteen gallons of water, but they left candy, Powerades, and Flamin Hot Cheetos. Great job Flamin Hot and Spaceman! 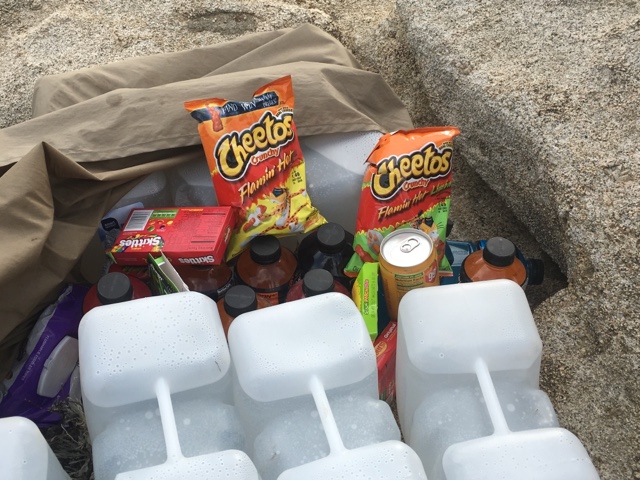 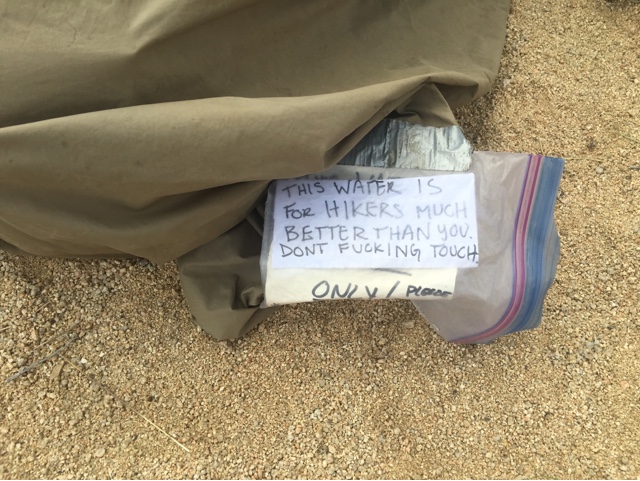 Sorry about the language, but it was too funny not to share 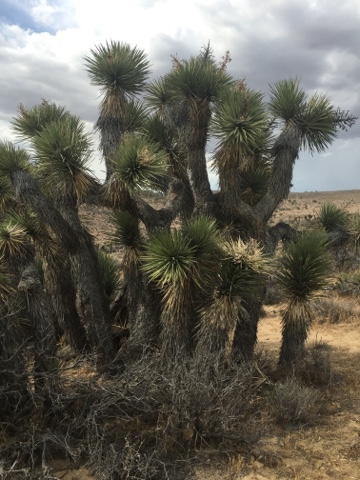 Joshua Trees
We found a great place to setup camp, there was even a picnic table. Anytime that I don't have to sit on the ground to cook dinner makes me extremely happy. We toasted Spaceman and Flamin Hot with our Powerades as we ate our dinner. I was so hungry that I cooked two dinners(it still wasn't enough). Since this area doesn't see a lot of cars we will have to pack out all of the empty water bottles and trash. Everyone doesn't mind the extra weight. It was nice coming across two water caches in the same day. It made for a much easier hike since we didn't have to carry a ton of water.
"I always have this image of a woman running across a desert carrying children, trying to find water and food, not knowing when they'll get that. And her feet are slashed up from the dry, hard earth... Even when I'm uncomfortable, sometimes in pain, or just cold... I think, 'Thank God for what I've got." Sue Townsend
Posted by Yoda at 2:54 PM