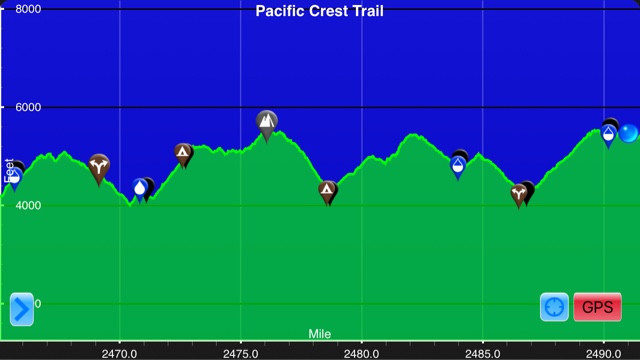 Total up/down: +6,102/-5,513 feet
I woke up to the sound of rain against the roof of my tent. Today promised to be another soggy day of hiking. I packed up as quickly as possible, but everything went into my pack slightly damp in the least and soaking wet at the worst. Shortly after leaving camp the rain stopped and the sun began to rise above the mountains. Maybe it would be a nice day after all. 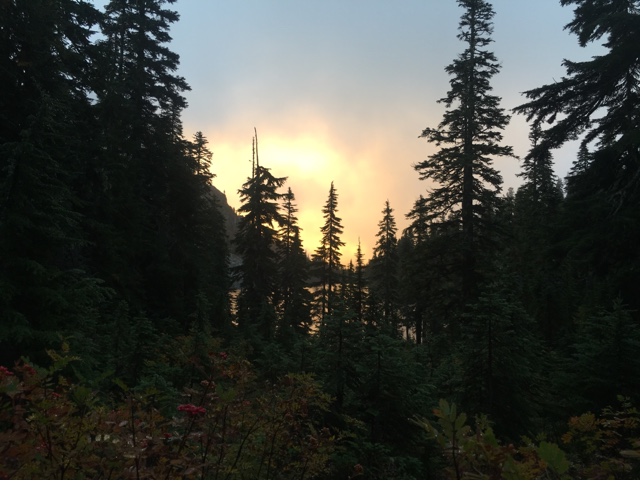 Sunrise over lake Valhalla
Even though it had momentarily quit raining hiking was very difficult. The trail was a sloppy wet mess and my shoes and legs were soon drenched. It was difficult to make good time in such conditions. I was slipping and sliding all over the trail. I had to focus on every step that I took. I was able to avoid the worst of the mud puddles. I could see other peoples tracks through the mud. Through careful observation I could tell where they had slipped and avoid stepping in the same place. I was hoping that once the rain stopped the sky would clear up, but it remained very foggy and misty throughout the morning. 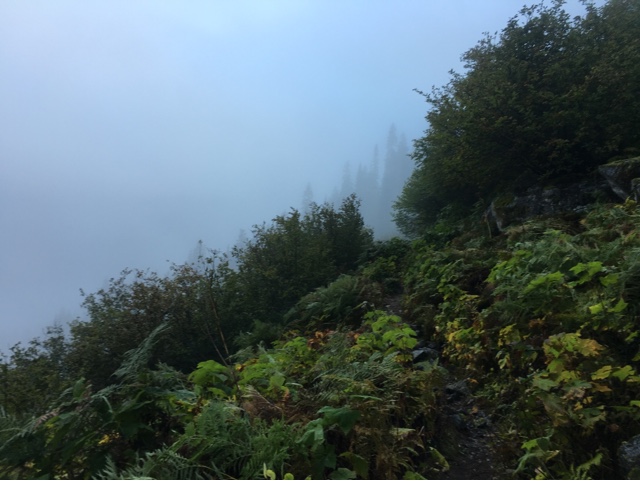 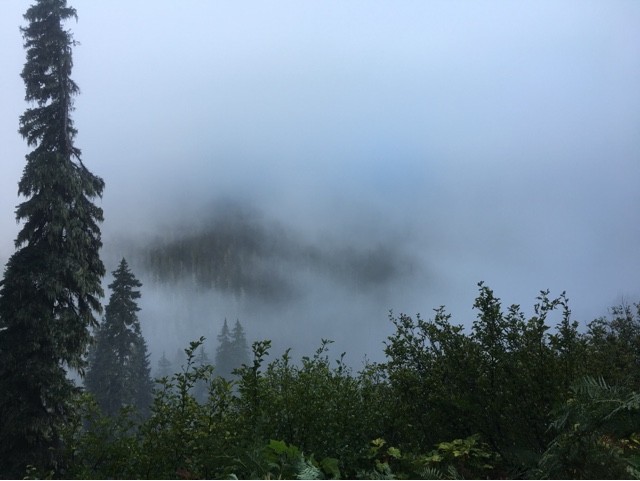 Not much to see
This section of trail is supposed to be spectacular. I was really hoping that the sun would start to shine and burn off the fog. I could barely see five feet in front of me. Plus hiking through the fog was cold and left me slightly wet. I had to deal with a few stream crossings and damp overgrown shrubs. It was not shaping up to be a great morning. 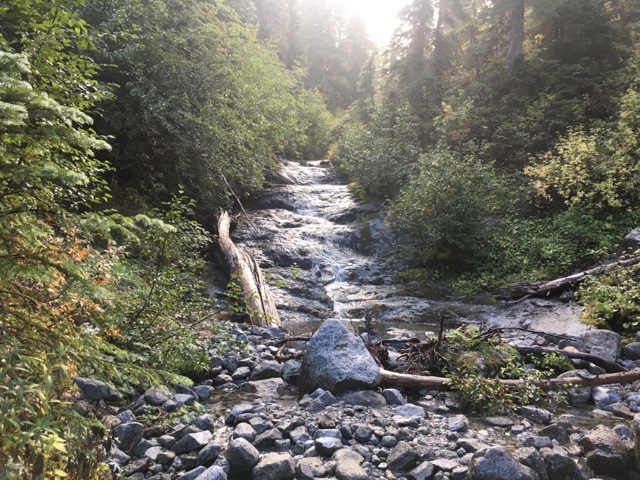 One of many stream crossings followed by dense brush
Around ten o'clock I got my wish, the sky began to clear. It was still chilly out, but at least I could see what was around me. This section of Washington is beautiful. It is vaguely reminiscent of the Sierra, but just barely. It has a certain uniqueness to it as well. 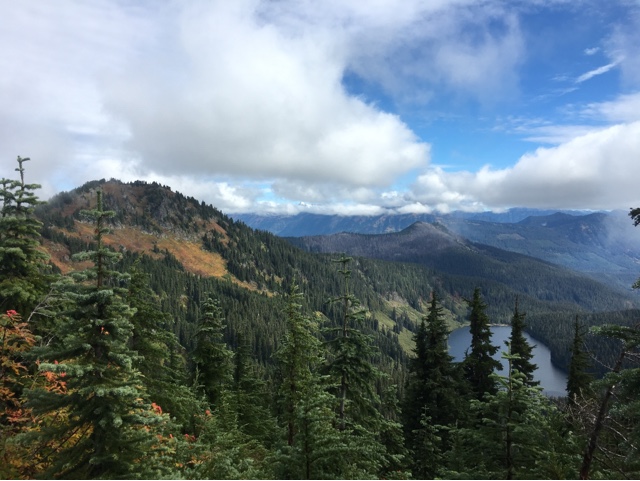 Partly cloudy, 100% beautiful
The terrain is definitely getting harder. The climbs are steeper and the downs are getting more difficult as well. I was exhausted after only hiking fifteen miles. Part of the problem is the hiking had become more technical. I spent a good portion of the day on wet rocks and narrow trail. I also had to contend with massive sections of downed trees. I tried to keep my spirits up, but it was hard. The sun was only out for brief moments. The rest of the time it was cold and windy. I didn't take any long breaks. It was just too cold for that. Instead I took a ton of short breaks. Stopping long enough to eat something or to process water. That made today seem more like a grind. I think I'm just mentally exhausted. I'm about ready for this hike to be over. In my opinion, this happens at some point on any long distance hike. I know once I finish I will wish to be back on the trail, but right at this moment I'm ready to be done. I hit this point last year with about two hundred miles remaining. No matter how difficult or easy a day is, the last mile is always a killer. My mind and body seem to realize that I'm on the last mile of this thruhike. The weather isn't helping much either. Maybe I would feel differently if it was warm and sunny. 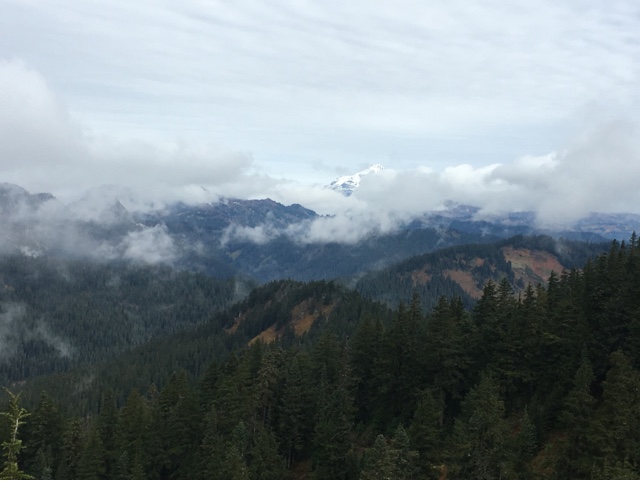 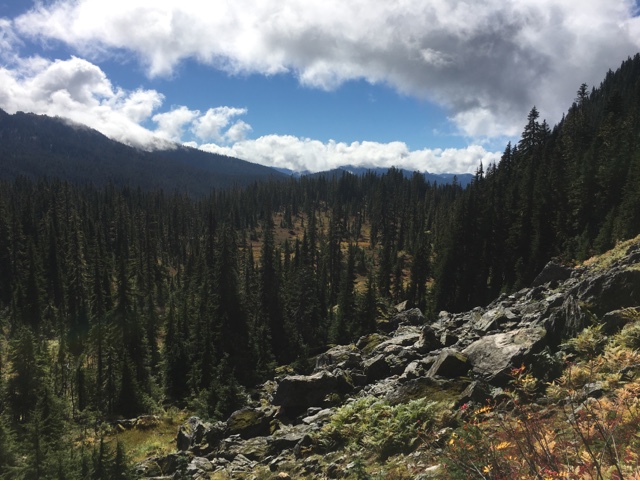 Twenty minutes later
The good news is that I'm finally starting to see some familiar faces. I've been hiking by myself or with complete strangers for the last few weeks. I was beginning to wonder what happened to everyone that I know. Today I caught up to Zippy and Sleepy Andy. I met Sleepy back at Hat Creek Rim, just outside of Burney Falls. I have been bouncing around Zippy since before Crater Lake. We hike about the same pace and mileage so I hope we continue to see one another.
Around midday the sun came out for a long time. It still didn't warm up, but at least I could dry out my fleece, gloves, and stuff sacks. I was really wanting to hike at least twenty five miles today, but that just wasn't going to happen. I was exhausted by three o'clock and I had one more long climb to make. I was just hoping to finish hiking before dark. 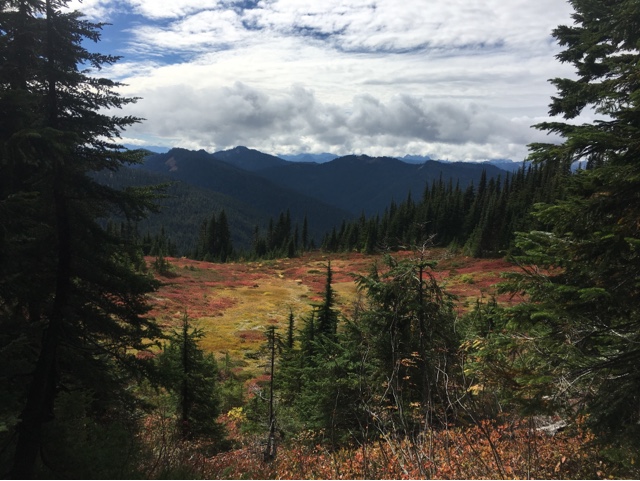 So many rich colors
I was about halfway through a two thousand foot climb when the storm clouds began to move in. I tried to go faster, but my legs were shot. I just didn't have anymore energy left in my body. I kept putting one foot in front of the other and I managed to stay ahead of the storm. 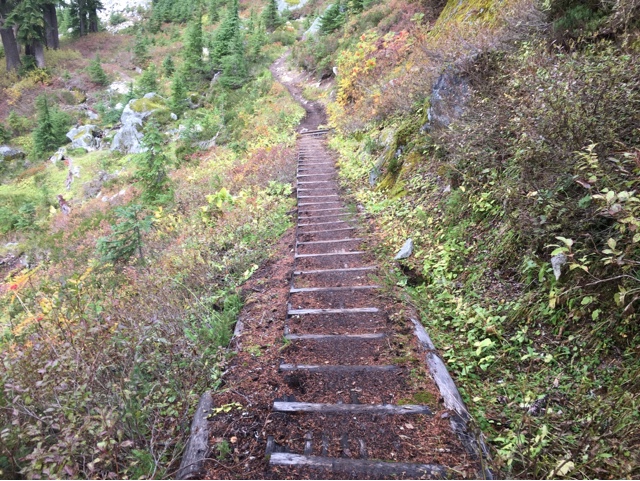 Tricky(wet logs aren't fun)
I made it to camp before dark and before the rain began. I was blown away by how pretty my campsite was. There were a lot of people already there when I arrived. Luckily there was enough space for everyone to camp. I found a quiet spot away from everyone. I was able to get setup and to cook dinner before the rain started. I ate my dinner inside of my tent as I watched it rain. It is going to be a cold night tonight. Even though the inside of my tent is slightly damp, I managed to keep my pj's and sleeping bag dry. I'm pretty confident that I'll stay warm. 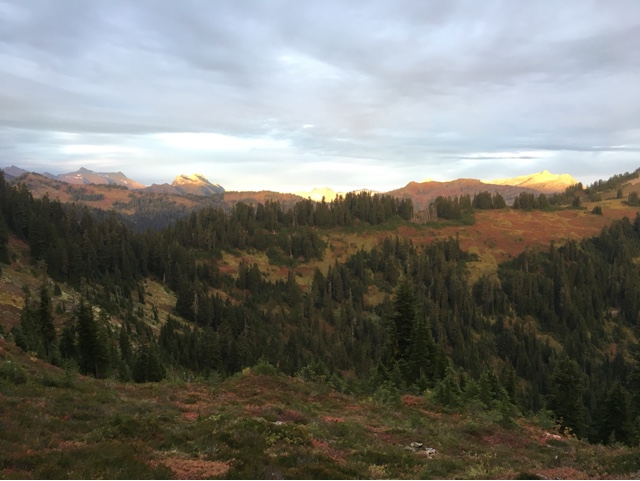 View from my tent 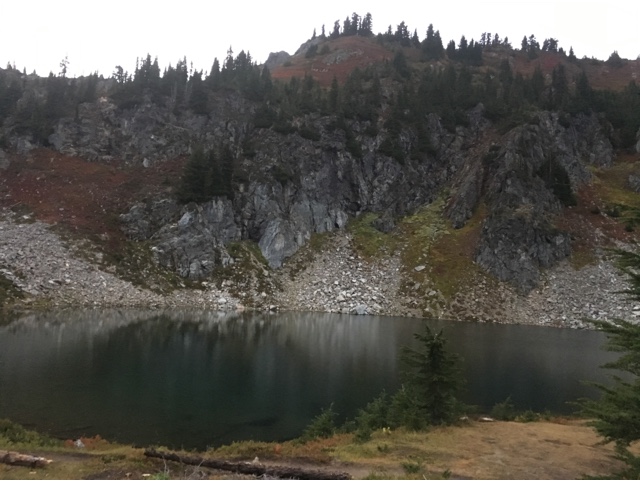 View as I cooked dinner
Tomorrows forecast calls for it to be sunny and pleasant. God, I really hope that is true. These dismal, dreary days are beginning to take there toll on me.
"As a single footstep will not make a path on the earth, so a single thought will not make a pathway in the mind. To make a deep physical path, we walk again and again. To make a deep mental path, we must think over and over the kind of thoughts we wish to dominate our dominate our lives."
- Henry David Thoreau
Posted by Yoda at 9:05 AM