Total up/down: +5,063/-4,270 feet
Every morning seems to be a little colder than the last. I was a little slow getting out of camp this morning, mostly because I had to go retrieve my food bag from where I had hung it. Luckily the bears and mice left it alone. I was really looking forward to the hike today. Last week I meet a weekend warrior who told me to be on the lookout for the larches around Rainy Pass. I wasn't exactly sure what a larch was, but I was told that I would know it when I saw it. I was also looking forward to reaching Rainy Pass, the last paved road of the trail, and Cutthroat Pass. Today was shaping up to be a beautiful and exciting day.
I started off climbing uphill and I would spend the majority of the day continuing to go uphill. Even though it was a sunny day it felt very brisk out. I was able to take most of my layers off early on in the hike. I never did manage to shed my pants though. After only 2.4 miles I exited the northern boundary of North Cascades National Park. I crossed through seven national parks during this trek; Sequoia, Kings Canyon, Yosemite, Lassen Volcanic, Crater Lake, Mt. Rainier, and North Cascades National Parks. The PCT has been very diverse! Either there wasn't a sign marking the border or I just didn't see it.
I did have to do a strange work-around to find away past a bridge that was out. There was no way I was going to attempt walking over this bridge. I'm not even sure how it was still being held up. 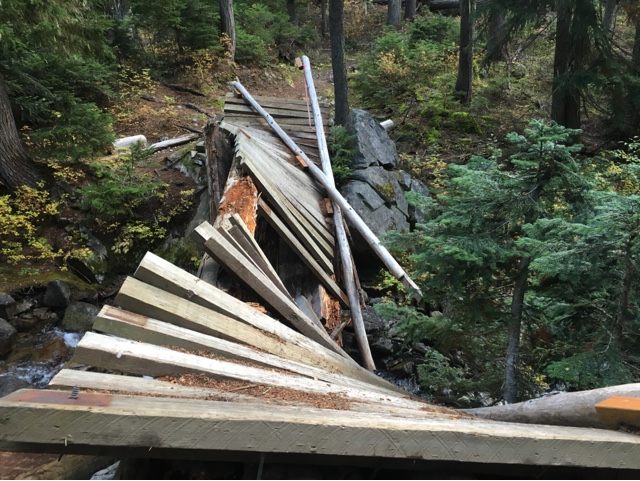 Nope, not going to try that
I found a safe and easy way across just upstream from the bridge. I had a few more stream crossings before I made my way to Rainy Pass. They were all very easy to navigate. This section of trail appears to be very loved by whoever is in charge of maintaining it. The crossings were all easy due to well placed logs. The logs were more like rudimentary bridges. The tops were all cut flat making them easy to get across even when they are wet. I really appreciated the attention to detail the trail maintainers showed throughout this section. I did have a scary moment when I took a very normal step and had my knee buckle under me. I was momentarily horrified that I had torn something in my bad knee, but after a few tenative steps everything seemed to be ok. 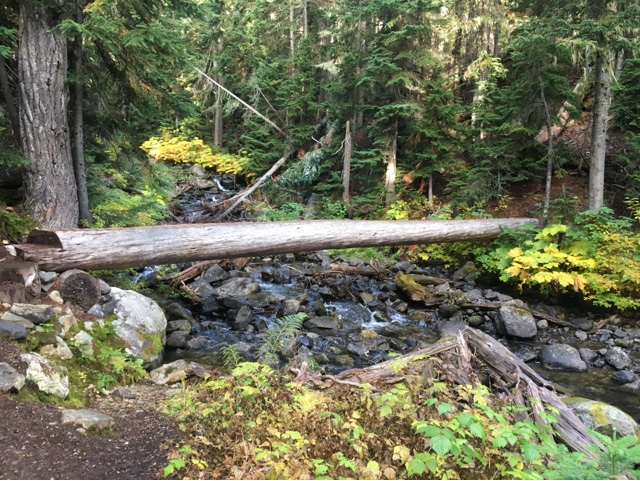 My kind of log
I made great time to the trailhead at Rainy Pass. Over six miles I only gained 1,700 feet of elevation. For a good portion of those miles I couldn't even tell that I was hiking uphill. The trailhead parking area had a pit toilet and a low wall that was perfect to sit on. I removed a few more layers and ate my last treat from the bakery in Stehekin. I chatted with a few day hikers while I was eating. They informed me that the weather forcast has improved. It looks like the snow will hold off until late tomorrow or early saturday. I really hope that is the case. As they headed towards Cutthroat Pass a National Forest service employee showed up to clean the bathrooms. He offered to take my trash. I love it when I can unexpectedly offload a few ounces of garbage along the trail! 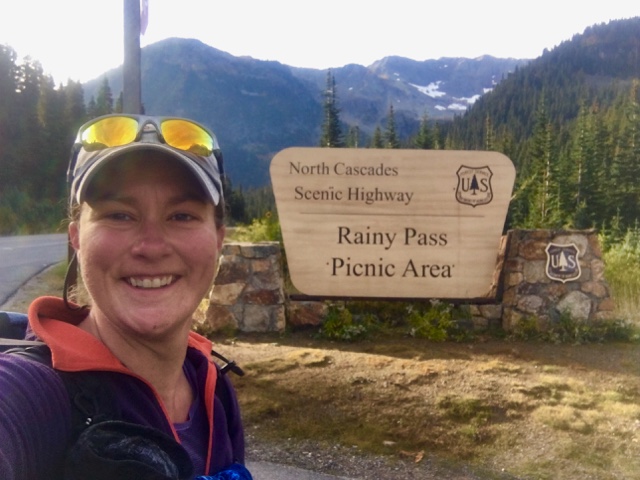 Last paved road for 70 miles
I was only five miles and 2,000 feet of elevation gain away from Cutthroat Pass. The hike up to the pass was fantastic. The larches were breathtaking. The weekend warrior at Mica Lake was spot on, I hit this section at the perfect time to see the larches. Larches are deciduous conifer trees. There are only two species of trees in Northern America that are both coniferous and deciduous, the larch is one off them. The western larch is unique. Instead of maintaining their needles throughout the winter as other conifers do, larches are deciduous and drop their foliage and grow new needles every year. When used as firewood larches are also called, tamarack. What all of this scientific babble means is that larches turn a brilliant gold color as winter approaches. When added to the yellow and red colors of maples and huckleberry bushes, I was in for quite a treat. I was surrounded by so many shades of red and yellow, that I felt like I was engulfed in flames. I have never seen anything like it. The mountains in the distance were a lush green interspersed with splashes of brilliant gold. 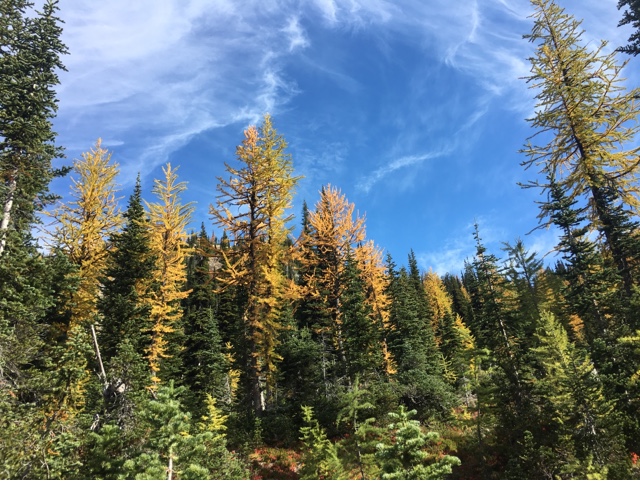 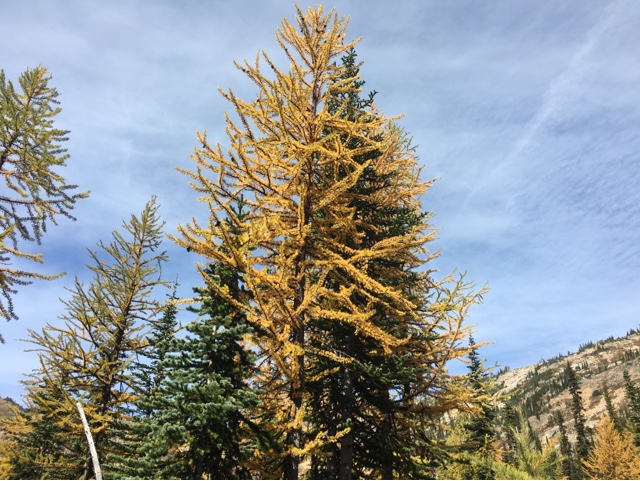 I am absolutely enthralled by these trees 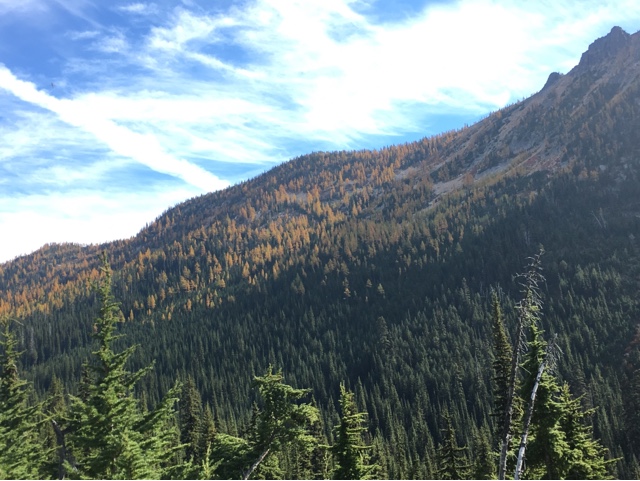 Splashes of gold across the way
The remainder of the miles up to Cutthroat Pass went by quickly. The sight of something new, completely foreign, and mesmerizing was better than a can of redbull. I was absolutely vibrating with renewed energy. The view from Cutthroat Pass was spectacular as well. I shook off my pack and sat down for a nice long break. The day hikers I met in the parking lot of Rainy Pass had waited for me at the top. They wanted to hear all about my hike. As we chatted I told them that my batteries for my headlamp had just died on me. The husband opened his pack and handed me three brand new batteries. Hikers are the nicest folks around. We are always looking out for one another. As we said our goodbyes I was greeted from behind by, MAGA. I haven't seen him since Oregon. He joined me for the remainder of my break and we would end up hiking together for the rest of the day. This was unfamiliar territory for me. I haven't actually hiked with anyone else for a very long time and I was glad to have the company. He is a very well spoken guy and always has something interesting to say. We hike around the same pace and the remainder of the miles just flew by. 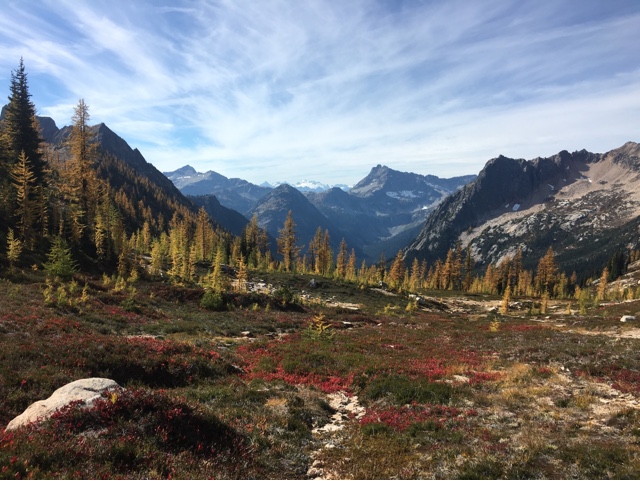 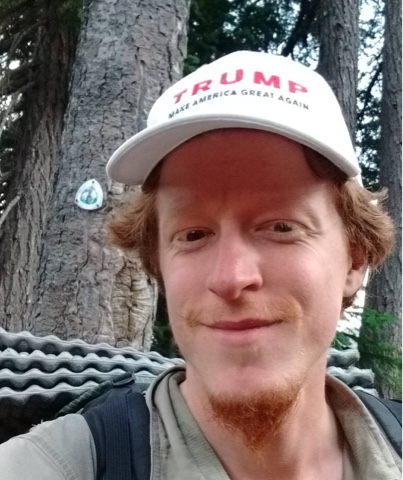 MAGA(MakeAmericaGreatAgain)
I took a much longer break than I usually allow myself. From where I am standing I only have 57 miles left until the border. I'm not sure what the weather will be like for the next two days and I'm not sure what the terrain will be like. For all I know this will be my last chance to take in these epic views and not have to worry about the possibility of snow. MAGA and I hiked the next six miles along a ridgeline. We could see the entire valley spread out before us. The mountainside was alive the change of seasons. 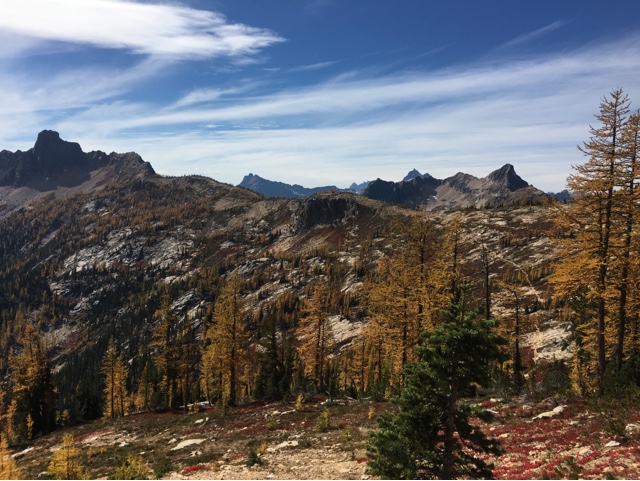 I'm so lucky to get to see stuff like this everyday 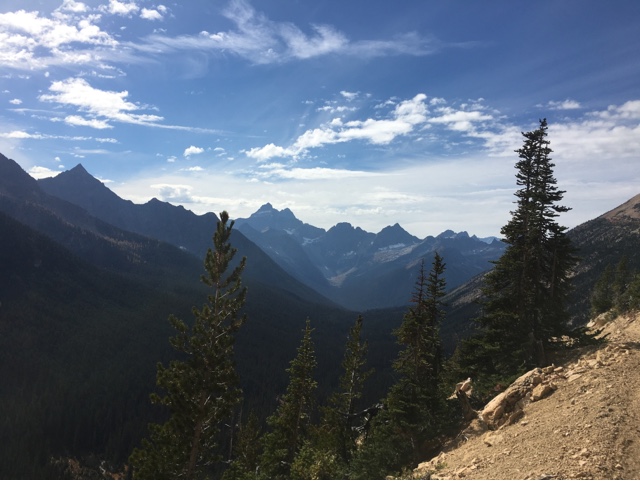 Canada is somewhere in that direction
MAGA and I where so deep in conversation that we almost missed the last trail mile marker. I barely saw it out of the corner of my eye as we were hiking through a section of switchbacks. 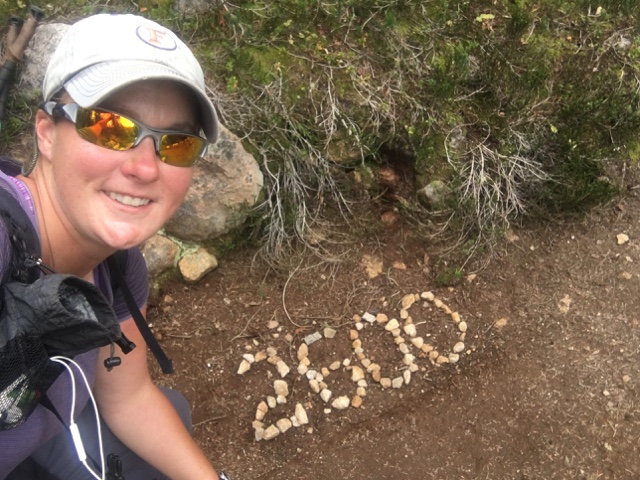 2,600 miles!!! Only 50.1 to the border
As the sun began to dip behind the mountaintops the temperature began to drop rapidly. I still had another six miles to hike before stopping to set up camp and I don't like it when I have to put on more clothing before the end of the day. No matter how careful I am, I always end up getting into camp with my back wet from sweat. I had to choose the lesser of two evils, stay in my short sleeve shirt, but get to camp chilled, or put on my fleece and get to camp wet. I chose to get to camp wet. I have more dry clothes I can put on under my fleece. I struggle with this every night, but I always come to the same conclusion and it always works out. I guess I just need something to fret over.
MAGA and I parted ways just before the end of the day. He needed to stop for a break and I wanted to hurry up and get to camp before the sun set and it got any colder out. He was going to hike another four or five miles past me anyway. He sleeps later than I do so I'll probably catch up to him in the morning. 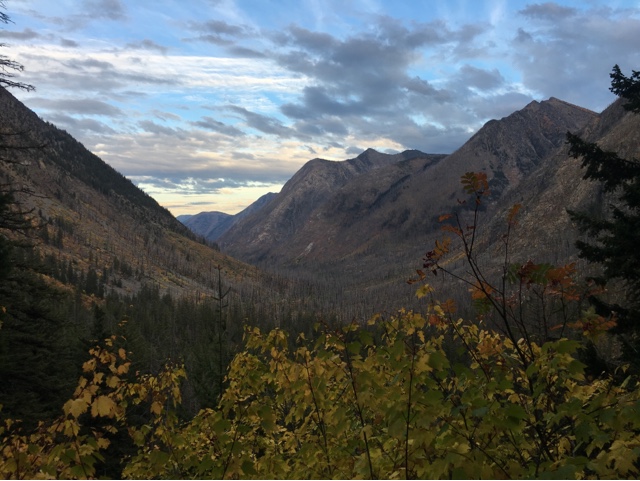 View from camp
As I was cooking dinner MAGA walked past and I bid him goodnight. Shortly after he left, Mountain Goat stopped to say hello. I haven't seen him for a few days and I thought he was ahead of me. He decided to camp in the same area as me and we chatted while doing our camp chores. It seems like we are on the same time schedule for finishing the trail. I am glad to finally have some familiar faces around as the trail comes to an end. I was beginning to think that I wouldn't know anybody around me when I got to the monument.
It is going to be really cold tonight. It wasn't even completely dark yet, but it was already colder than any other recent night. I ate dinner quickly and jumped into my sleeping bag as fast as I could. I'm not looking forward to getting up and out of my sleeping bag in the morning.
"To be nobody but yourself in a world that's doing its best to make you somebody else, is to fight the hardest battle you are ever going to fight. Never stop fighting."
- E. E. Cummings
Posted by Yoda at 9:35 AM