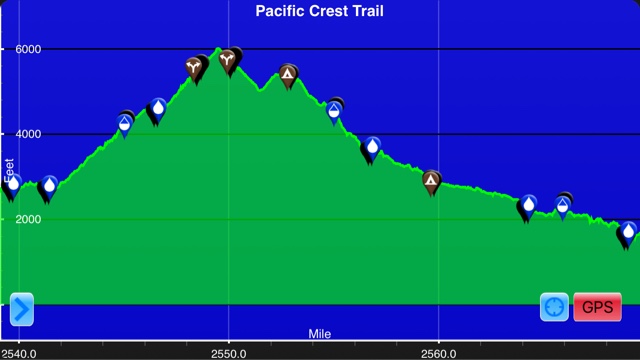 Total up/down: +5,739/-6,939 feet
I wish I could always camp at this elevation. I was so warm last night that I slept in a tshirt and shorts. That hasn't happened for a very long time. I was hoping to get an earlier start this morning. I had a lot of miles to cover and not a whole lot of time to do it in. The last shuttle into Stehekin leaves at 6:15 pm. That means I have to hike 29 miles in around eleven hours. I will have to average 2.6 mph for the entire day. That is almost out of range for me. I had hoped to start hiking around 6:40, but when I woke up it was raining. I didn't exactly fall back to sleep, but I didn't get up either. I stayed in my tent until 6:30. I couldn't wait it out any longer. I had to get moving. As I began to pack up camp the rain had almost stopped. There was just a very light drizzle that I have come to associate with the Pacific Northwest.
The hike today was a little bit easier than the last few days. I had one really big climb, but it was spread out over several miles. I actually prefer to start the day off with a big climb. It helps wake me up and get my blood pumping. I started off the day listening to music, which I don't normally do. It was nice to have new tunes to listen to as I worked my way up the climb. 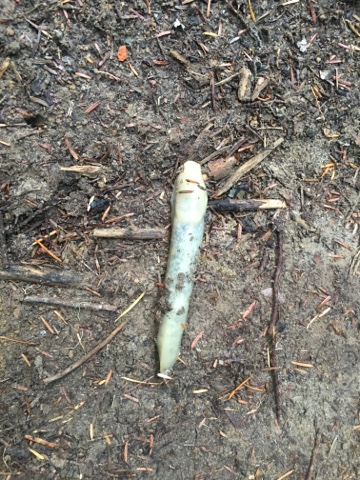 Crazy alien looking slug that I almost stepped on
After a wet start to my day the weather cleared up nicely. It was an absolutely beautiful day. There weren't many clouds in the sky and it was pleasant hiking temperature. I was enjoying myself so much during the climb that I forgot to pay attention to my water. I didn't have very much left and I still had several miles to hike before the next source. Luckily water has not been an issue at all lately. I can't remember the last time I actually looked at the water report. I haven't come across a source that wasn't flowing in a very long time. I guess that is one benefit to all of the rain lately. 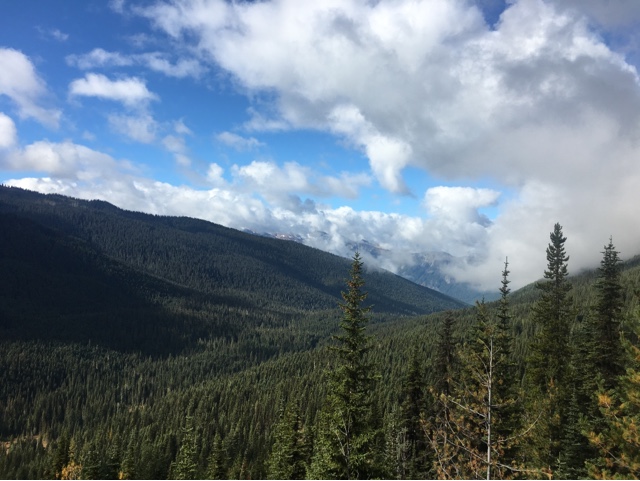 Looks like another great day
Towards the very top of the climb I had my pick of water sources. They were all crystal clear and ice cold snow melt fed streams. I was sorely tempted to drink straight from the source, but I never do that. I can't believe how pretty this section has been. Today was filled with wondrous views once again. I took a very long break next to a stream. I ate half of my food for the day. Due to the squirrel or chipmunk from last night, that wasn't very much food. I had a poptart and a snickers bar. 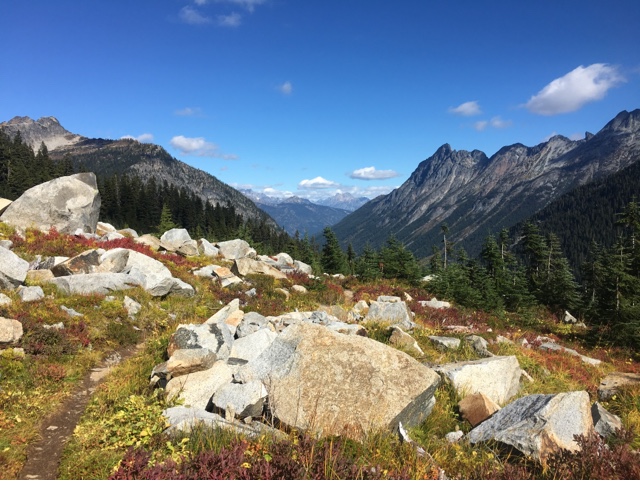 View from the top
I really didn't think that I was going to make it to Stehekin before the shuttle left. Every time I looked at my watch and ran the numbers it didn't look possible. It was never out of the realm of possibilities, just a long shot, so I kept hustling along. I cut out my normal breaks and I carried extra water so I didn't have to stop and process more. The thought of going hungry tonight was a great motivator to keep pushing. The first part of the hike was the hardest to keep up a quick pace. I was surrounded by incredible sights and I kept pausing to take pictures and to take in the views. Eventually I dropped back below treeline and I didn't have as many distractions. 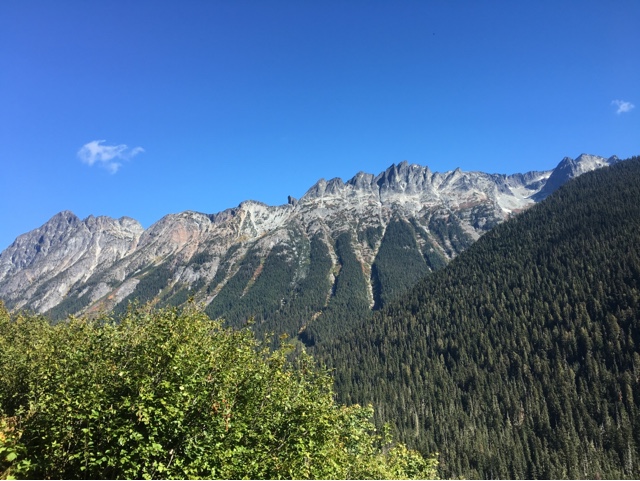 Couldn't help stopping to take pictures like this
Once I was back down in the trees I had a big water crossing to contend with. It took me forever to find a dry way across. I ended up having to go downstream a quarter of a mile to cross on a giant downed tree. This really slowed me down. I really didn't think that I could make it into town with the amount of time I had remaining. Once again it was just within the realm of possibility so I kept moving along. 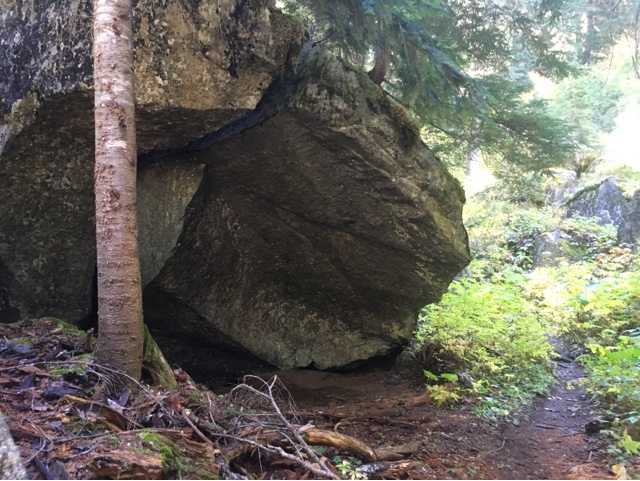 Cool rock outcropping. I bet lots of people have been taking shelter here lately
I had a few more stream crossings to contend with, but they all had log bridges  built to make crossing a breeze. I passed by another area with giant trees. I never did get to see the giant sequoias of Sequoia National Park, but the huge trees of the Northern Cascades have more than made up for that. I wish that someone had been around me when I hiked past these trees. It is hard to show the scale of them without having a frame of reference. Trust me, they were big. I think this one was twenty feet in diameter. 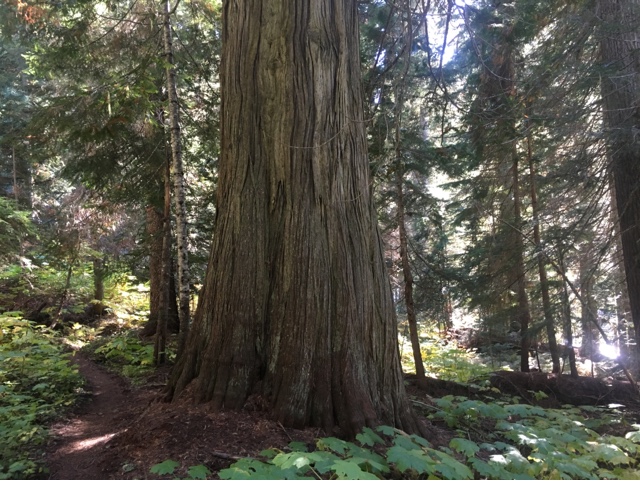 Giant tree
The last eight miles into Stehekin were all downhill. I was right on the edge of making it in time to catch the shuttle. What makes Stehekin such a unique town is that you can not drive to it. There are only three ways to get there, by seaplane, ferry, or to hike in. The town offers a shuttle four times per day from the trailhead into town. If I missed the shuttle I would have to wait until the morning or walk nine miles. I ended up running and walking for the last five miles. I covered four and a half miles in the last hour. Just before making it to the trailhead I crossed into my last National Park of the trip, North Cascades National Park. I took a quick picture and scoured the ground to find the perfect rock. I have collected a rock in every National Park I've entered along the trail. I have sent most of the rocks home along the way. There was no way I was going to carry those rocks the entire trail. I have been privileged to hike in Sequoia, Kings Canyon, Yosemite, Lassen Volcanic, Crater Lake, Rainier, and North Cascades National Parks. 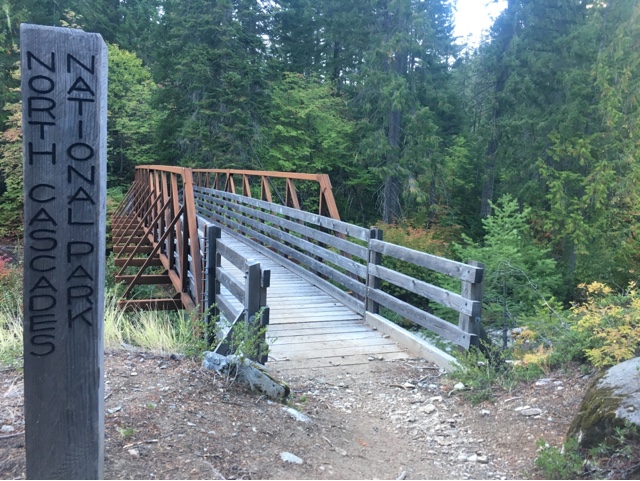 North Cascades National Park
Shortly after crossing the bridge pictured above I made it to the trailhead parking lot. I had cut it really close, it was 6:08 pm. I was worried that the shuttle was running early and had left without me, but within one minute of getting there the shuttle arrived. Whew, I still couldn't believe that I made it. I almost gave up several times throughout the day. Thankfully it was just always within reach. I could never fully rule out that I could make it in time.
The shuttle dropped me off in Stehekin around seven o'clock. The first thing I did was get some dinner. The only restaurant in town was very expensive, but I didn't care. I spent $35 for a hot chocolate and a giant portion of bacon wrapped meatloaf with mashed potatoes and fresh veggies. I'm not sure if it was because I was starving, but it was absolutely amazing. I made it disappear within minutes. Then I went to the camp store and bought a bag of chips, cookies, and an Arizona Iced Tea. Life was good! I setup camp in the free PCT hikers area and tried to get some sleep. Unfortunately, a group of boisterous hikers had other ideas. They decided to play music and drinking games ten feet away from my tent. I was not pleased, but I held my tongue. After an hour of this I was pretty irritated. It was well after eleven o'clock, which is like three a.m by hiker standards. When they decided to play capture the flag without headlamps is when I decided enough was enough. Imagine ten drunk hikers running around your tent in the dark. I kindly asked them to take it somewhere else. Instead of being gracious about it, they mocked me. Luckily the game was short lived. The ringleader tripped over the rocky ground and hurt his leg. Everyone went to bed shortly after. I don't plan on being very quiet when I get up in the morning.
“Happiness is when what you think, what you say, and what you do are in harmony.”
- Mahatma Gandhi
Posted by Yoda at 9:24 AM