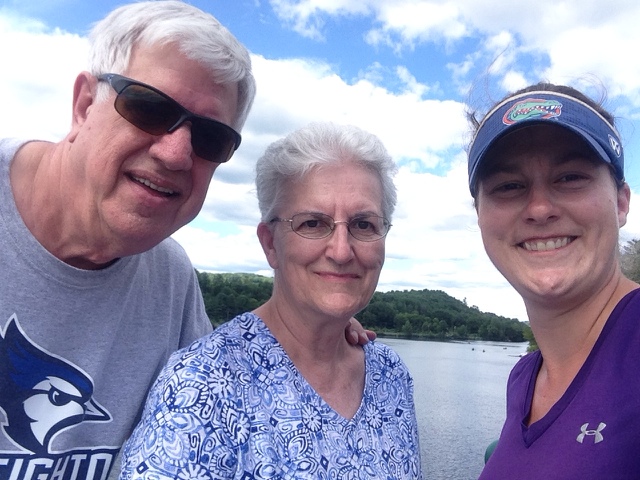 Uncle Tom, Aunt Liz, and Me
I am most definiety well rested now. I have taken five zero days in three weeks. I got to sleep in this morning and it was fantastic. I think this was the most comfortable hotel bed I have slept in the entire trip. Once I finally pulled myself out of bed, I met my Aunt and Uncle in the lobby for breakfast. My hiker hunger impressed them once again. I think I ate enough to feed three normal people.
We didn't really have plans for the day. It was nice to have a leisurely morning. Eventually we ventured out so that I could resupply. Lebanon had a coop grocery store. It was a little bit on the expensive side, but they had everything I needed. They were having a farmers market outside that was kind of neat. It featured all local products with free samples. I was able to try some local ice cream and candy. I do love free samples of food. There was also a local band with a fiddler, entertaining the shoppers. It made me think of, Fiddler on the Hoof, a thru-hiker I met early on in my hike.
Once the shopping was taken care of we headed back to the hotel. I sorted through my gear and repackaged my food. I'm not sure how easy resupplying will be once I get into the Whites. I'm trying not to stress about it though. Things have a way of working out on the trail. I've learned that it's not worth stressing about.
We decided to spend the afternoon walking around Hanover. I didn't get a chance to check out the Dartmouth College area while I was in town and I knew that Tom and Liz would enjoy seeing it. We had a quick lunch at Subway before heading over to the campus. I saw a few hikers in town that I knew. Two Bad Dogs, Tree Beard, Burl, and Rusty were all in town. I talked briefly with Rusty. It was good to see him again. I lost tracking him in New Jersey. 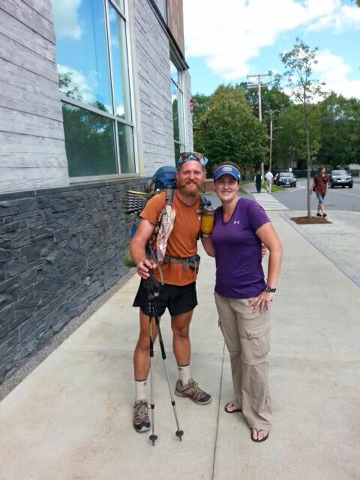 Rusty
Dartmouth was a really nice campus. Some of the buildings dated back to the 1700's. I learned that the main focus of the college is Liberal Arts.
After walking around for an hour we headed down to the Connecticut River. Liz and Tom wanted to recreate some pictures I had taken from the VT/NH border last week. 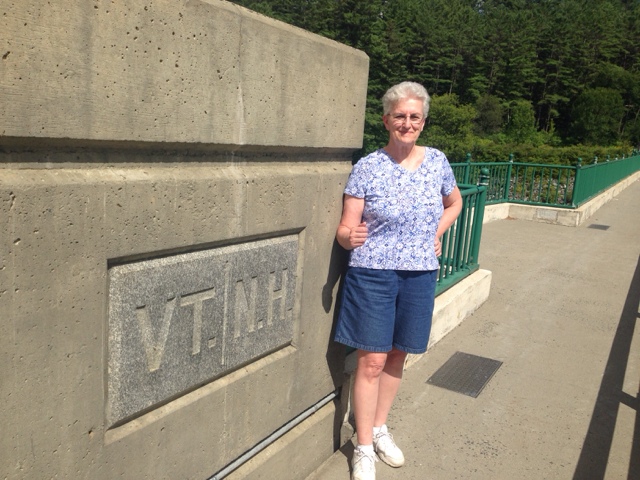 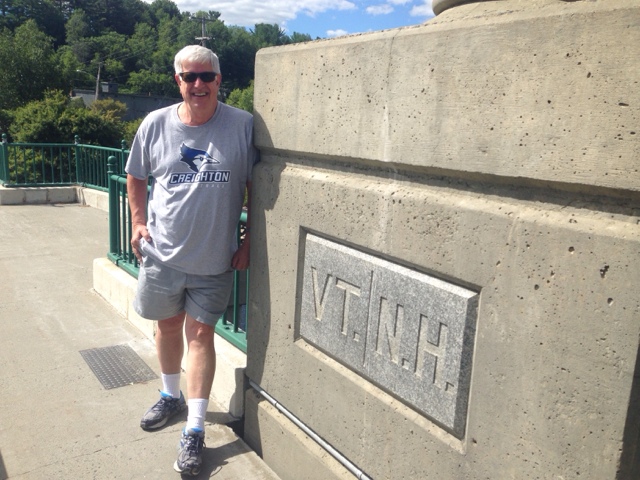 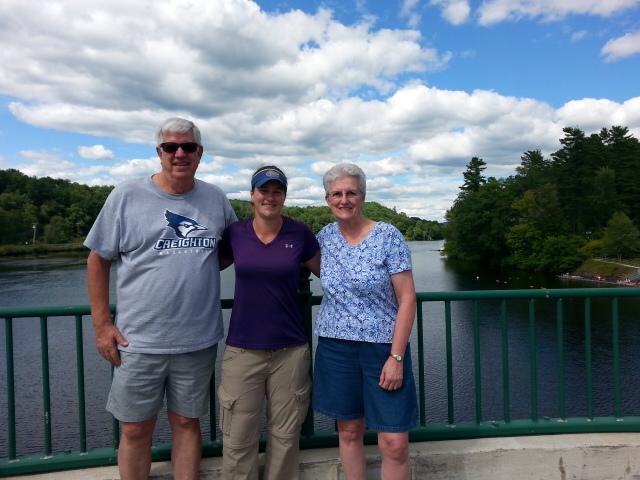 Bridge over the Connecticut River
Eventually it was time to head back to the hotel. They had a church service to attend at 4:30 and I needed time to get my blog done from the previous day.
While they were at church I called home, took care of some things on the computer, and attempted to write my blog. I got most of it done before they got back to the hotel, but still had a few paragraphs that needed some fine tuning. The hotel rooms included a full kitchen, so we decided to stay in and cook. Aunt Liz made dinner while we chatted in their room. Dinner was a tasty rice and sausage dish. After dinner I ate a pint of Ben and Jerry's ice cream. I surprised them with trail names while I polished off my pint. My Uncle Tom is one of the friendliest guys I've ever known. When my brother and I were little, he announced to a car full of grown ups that Uncle Tom was a BFG. The adults were on edge to find out what he meant by that. Anthony proudly announced, "You know, a BFG... Big Friendly Giant".
Everyone in the car had a collective sigh of relief. I proudly gave Tom the trail name BFG. Aunt Liz's trail name was a little more difficult to come up with. As the family historian, I thought about calling her, The Historian. That seemed too boring. I toyed around with, School House Rock, because she was a retired teacher. Also too boring. I finally settled on Broccoli Casserole. This name comes from an old family joke. At Christmas one year my mom had cooked broccoli casserole as a side dish. Liz is infamous for saying something silly or very obvious. When she asked my mom what goes into a broccoli casserole, my dad saw his opportunity to tease her. "Why Liz, I'm pretty sure broccoli casserole has broccoli in it", he said. It has been an inside joke ever since.
It was a very nice evening and I really enjoyed being able to spend quality time with family. I'm very lucky to have an Aunt and Uncle who were willing to drop everything they were doing and drive 1,500 miles to meet me.
Tomorrow should be another relaxing day. I like playing things by ear and not having every minute planned out. At some point in time they will return me to the trail, where I will start hiking in The White Mountain National Forest. Hopefully everything works out and I'll meet back up with my crew.
"Today is the beginning of a brand new day. You have been given this day to use as you will. You can waste it or use it for good. What you do today is important because you are exchanging a day of your life for it. When tomorrow comes, this day will be gone forever, in its place is something that you have left behind...let it be something good." -Given to Anthony Fleming by Tom Duggan
Posted by Yoda at 6:14 AM