Day 149- There Is Light At The End Of The Tunnel 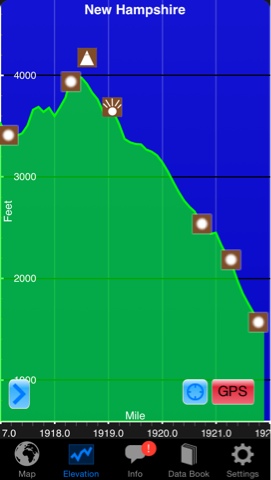 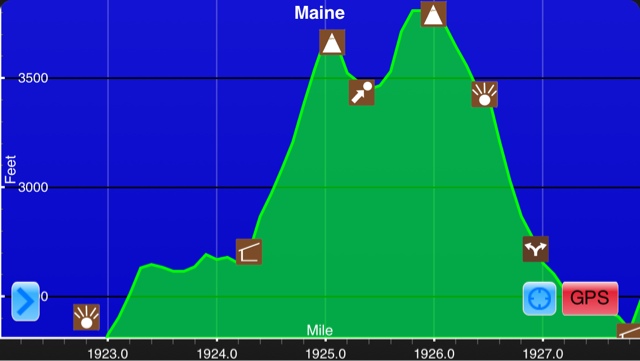 Today marks the last section of my Guthook trail guide app. I have used Guthook for all of my elevation profile pictures. It is a great app if you are thinking about thru-hiking the AT or the PCT.
Last night was cold! I felt like I was back in the Smokies, except I stayed warm last night thanks to my underquilt. This morning was a different story though. There is nothing worse than having to put on cold, wet clothes in the morning. It was about 50 degrees when I got up at 6:00. I'm not sure how cold it was with the windchill though, probably in the low 40's. I ate breakfast and made coffee, but it took me awhile before I forced myself to put on my wet clothes. I didn't actually leave camp until 7:30. I was dreading today. I was cold, wet, tired, and utterly demoralized. The terrain over the last three days has been miserable. It was much harder than anything I have done so far. After only a few minutes into this mornings hike I was honestly ready to quit. I considered slack packing, yellow blazing, or just quitting all together. We have all been pretty miserable the last three days. I was tired of feeling like I could die or be seriously injured with every step I took. This morning was no different. After leaving the shelter I only had to climb 600' over 1.1 miles. Sounds easy, right? Wrong!!! I had to climb up a crumbling trail, through the mud, and up wet rock slabs. The only  way to describe this challenge is for you to imagine a 15 foot stainless steel slide. Now picture that slide at a 60 degree angle, perched on the side of a dark, misty mountain. Before you try to climb up the slide, pour bacon grease mixed with mud down it. Now go ahead and climb up it. At the top will be a large muddy puddle with tree roots mixed in. Once you have your footing beneath you, look up, there is another slide to climb up. That is what I have been dealing with for the last twenty seven miles. Think that's bad? Try going down that. Today was even more fun because as I neared the top of the climb, I was above treeline. I had to contend with that madness, with 30-40 mph winds tossed into the mix. By the time I reached the top, I was at my wits end. I could not take another day of that type of terrain. My plan was to hike the 2.5 miles, all downhill, to Grafton Notch. From there I was going to hitch to the nearest town, get a nice hotel room, take a hot shower, and eat a lot of food. After that I would decide on how I would proceed. 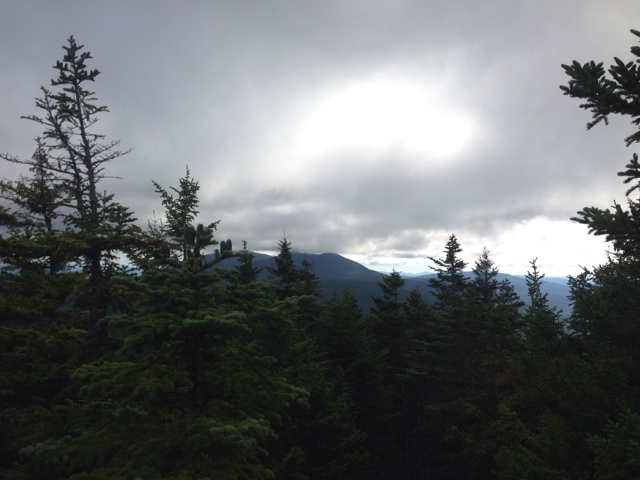 A break in the mist
As I turned the corner from the summit of Old Speck mountain, the craziest thing happened, I began to hike on actual trail. It was lovely! I kept expecting for it to go away and turn into something from ,Dante's Inferno, again. The farther I hiked, the nicer the trail became. I almost cried, I was so relieved. 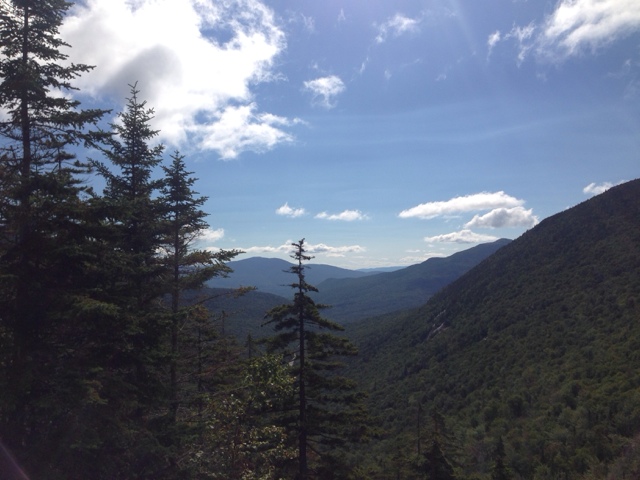 The sun even came out to play
I caught up to Airlock right around this time. We both agreed that our change in fortune came not a minute too soon. 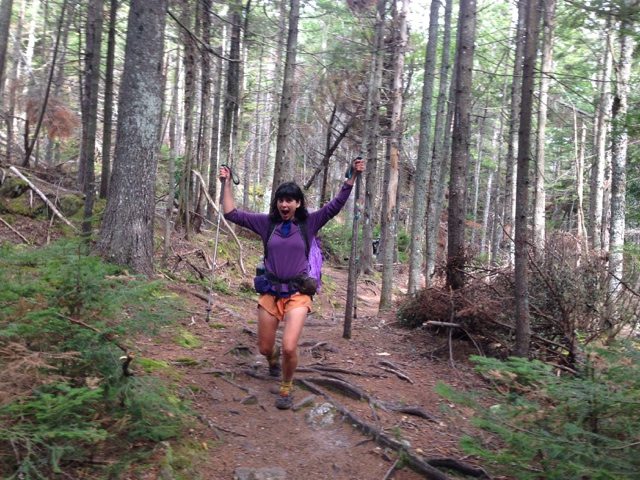 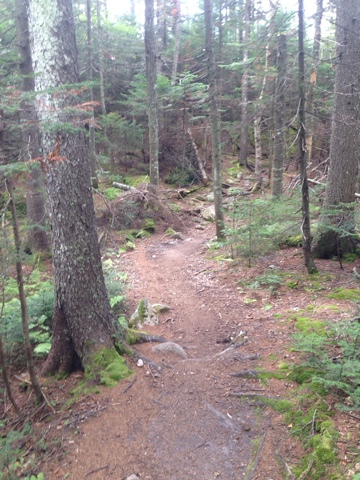 Actual, bygod trail
I had heard that the descent into Grafton Notch was really difficult. That couldn't have been further from the truth. It was a very enjoyable hike. To make things even better, the parking lot there even had a trash can and a privy. There was a trail maintainer that gave us clean filtered, non yellow water. I yogied(got food from a tourist without actually asking them for food. Like yogi bear) some almonds off of a day hiker. The sun was shining so bright that I was able to dryout all of my wet gear in a matter of minutes. It was amazing how quickly my entire world was changed. 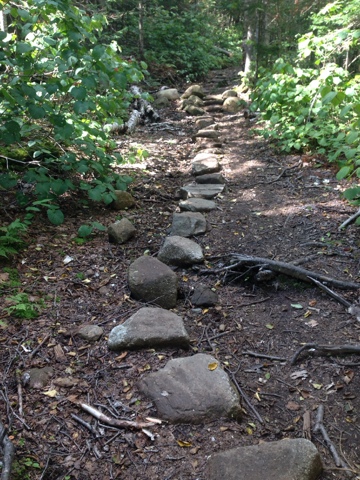 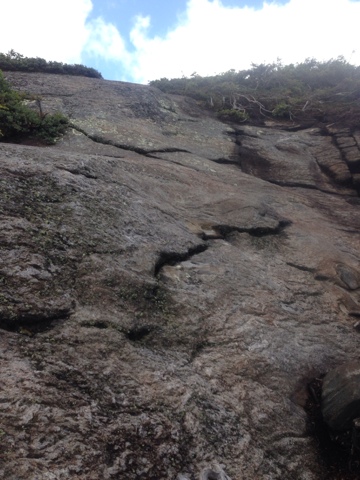 Evil trail
The day only got better from here on out. We climbed up Baldpate Mountain, and we were rewarded with amazing views for our effort. The climb was long, with a lot of elevation gain, but since it was over nice trail I couldn't have cared less. It felt great to stretch my legs out again. I actually hiked 2.6 mph for the first time in forever. My ankle still hurts, but even that seemed manageable. 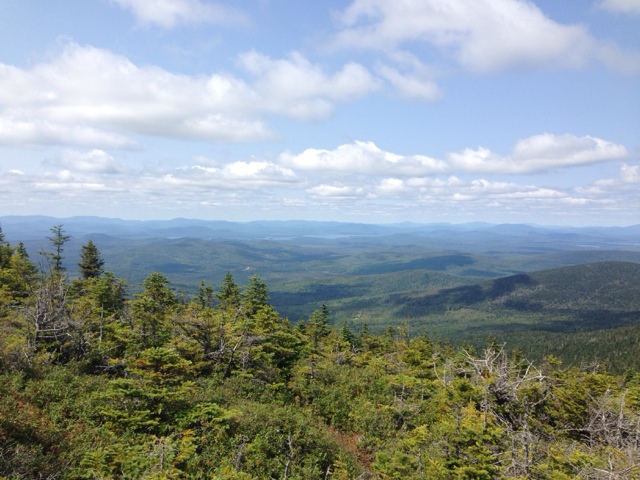 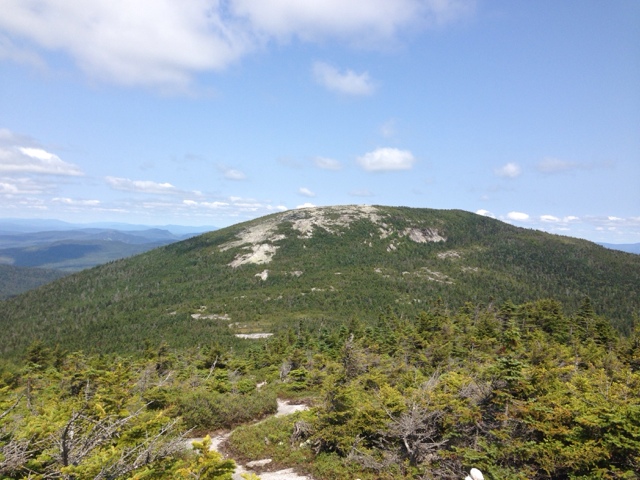 Looking at Baldpate East Peak
The hike up to the east peak was a blast. We went up the rock faces seen in the picture above. They were more like ledges that were fun to hike on. 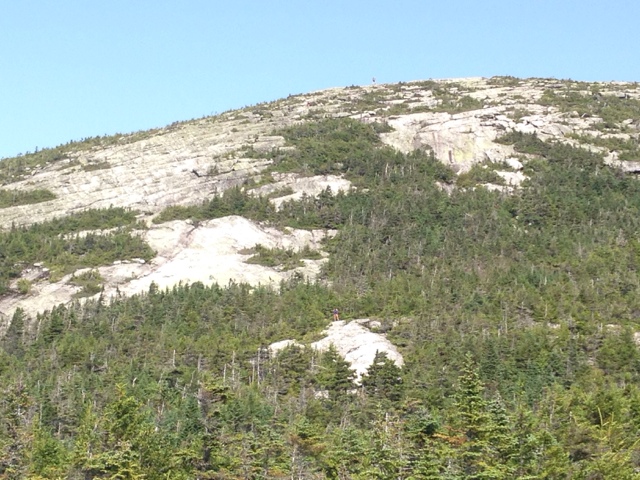 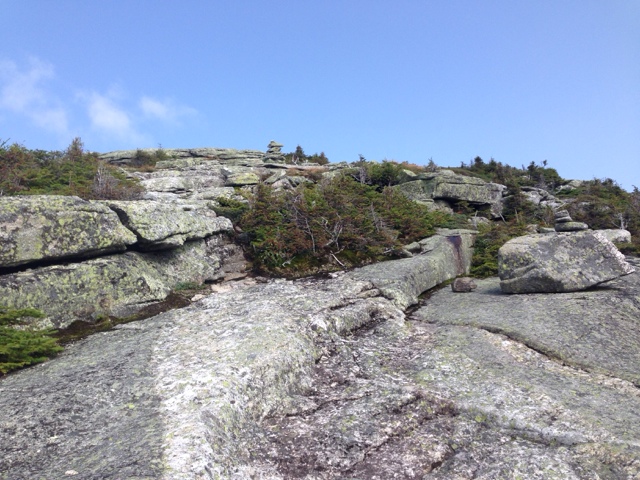 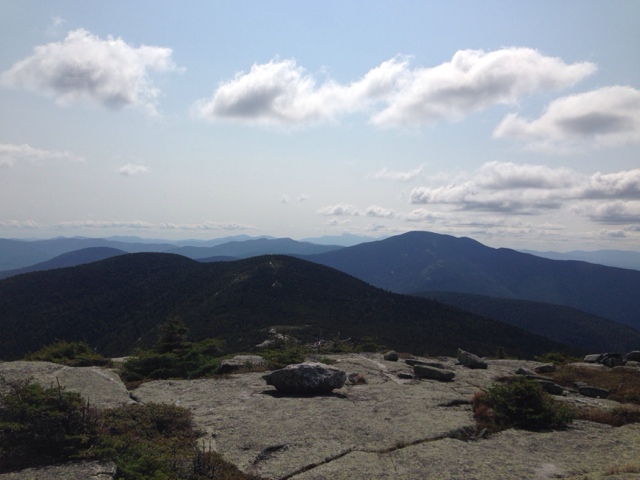 Mt. Washington and Jefferson barely visable in the distance 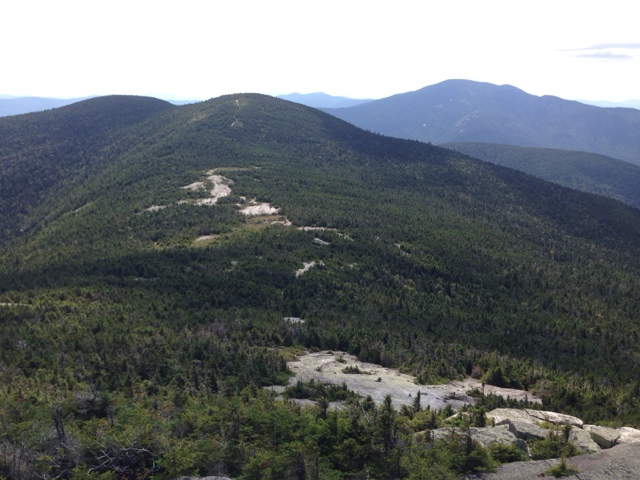 View back to Baldpate West Peak
The trail for the next mile returned to nasty, sketchy, unpleasant trail. We were a little frustrated by it, but somehow it didn't seem as horrible. I guess because we knew it wouldn't last. Hopefully from here on out, it will be hard climbs up tall mountains, but with nice trail conditions. I've heard that the nasty trail doesn't completely go away for the next 28 miles, but it is just in small sections. I was definitely taken to my breaking point the last few days. I honestly don't think I could have taken another full day of that crappy terrain. The AMC(known to thru-hikers as the Appalachian Money Club) should be ashamed of themselves. They charge us $8 to camp at shelters, they treated us poorly throughout The Whites, and they fail at even coming close to maintaining a safe, hikable trail. I'm not asking for easy, if it was easy everyone would do it. I'm just asking for a safe hiking trail. Ok, rant over with.... for now.
Tomorrow is a new day and I'm hopeful for what lies ahead. 256.4 miles left until I reach the base of Mt. Katahdin!!!!
"Today, you've got a decision to make. You're gonna get better or you're gonna get worse, but you're not gonna stay the same. Which will it be?" -Joe Paterno
Posted by Yoda at 6:06 AM