Day 135- The One With Franconia Ridge 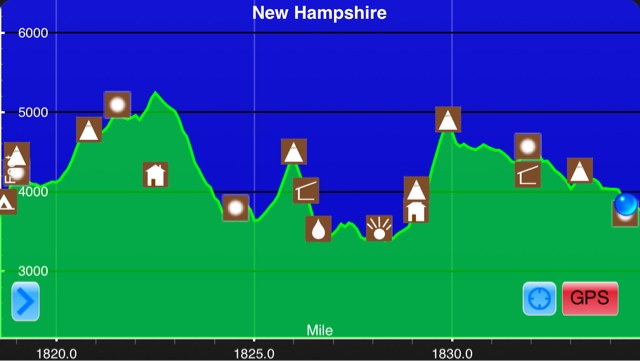 I've been looking forward to traversing Franconia Ridge since I started planning this trip, and it did not disappoint. We couldn't have asked for better weather. It was just cold enough that while we hiked we were comfortable. When we stopped to take a break it was a little chilly and we put on our puffy coats. The temperature really dropped last night, it was in the low 40's, but I stayed warm in my hammock.
The climb up Mt. Lincoln wasn't too bad, we did most of the work yesterday. We only had to go up about 800', but it was pretty tough. 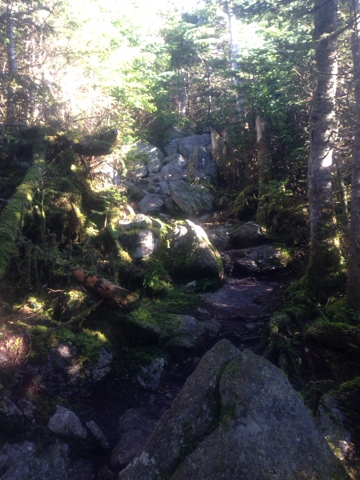 More rock climbing
Franconia Ridge is the ridgeline that connects Mt. Lincoln and Mt. Lafayette. What makes it so special is that it is completely above treeline. From the ridge you can see all of the Presidential mountain range, you also get 360 degree views of all of White Mountain National Forest. It was amazing!!! 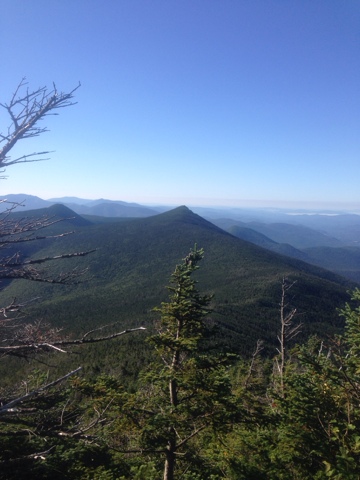 Looking back to Mt. Liberty 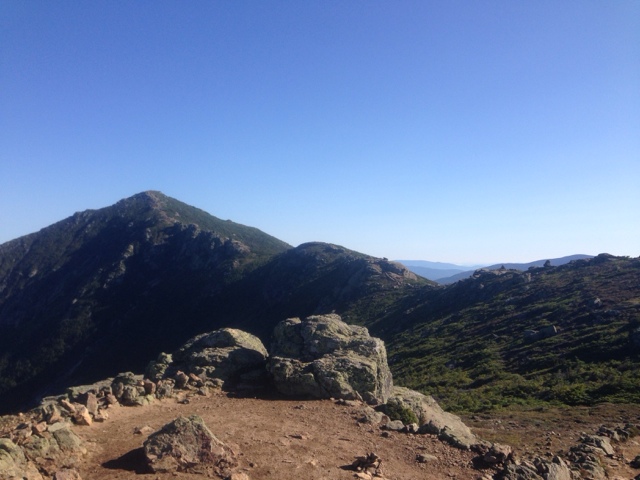 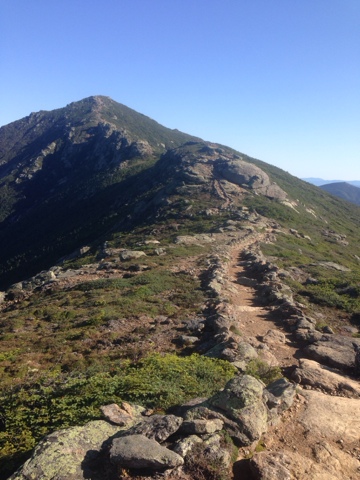 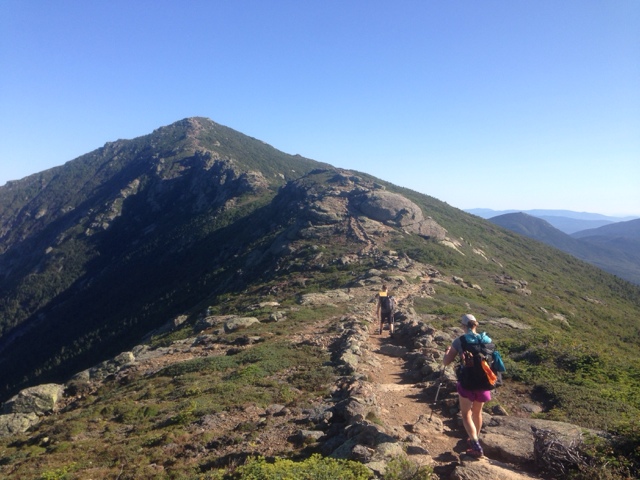 Adios and Outro help give the picture scale 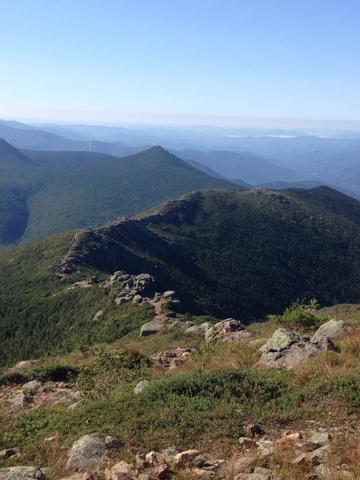 Looking back Mt. Liberty is the high peak in the center of the frame 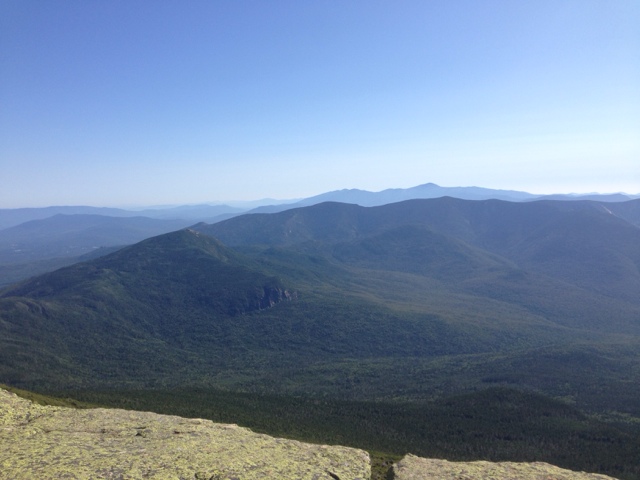 Looking forward: Mt Garfield is the small peak on the left, from there we will go across the mountains to the right. Mt. Washington is visable in the distance. Highest peak in the background.
We stayed on top of Mt. Lafayette and celebrated how far we have come. We took turns taking pictures. When I got to the top I was surprised to see China Rock was there. I hadn't seen her for a few days. She used her Gopro to take an epic picture of the five of us. 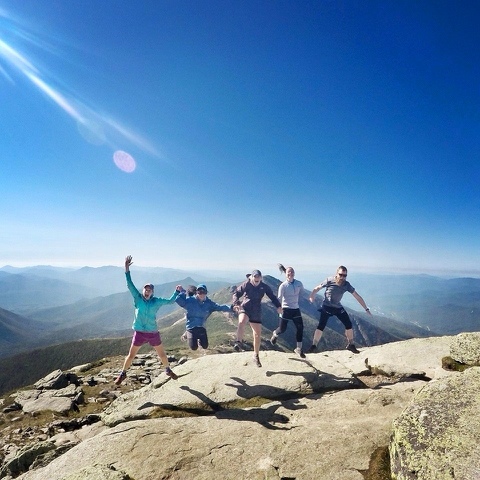 Outro, China Rock, Me(Yoda), South Paw, and Adios
Eventually it was time to head out. We still had three more mountains to climb. Climbing five mountains in the Whites was a very ambitious plan.
The climb up Mt. Garfield was very steep, I gained 500' in less than a half a mile. Right before the top I slipped on a wet rock and fell down. HARD. I banged my knee and twisted it at the same time. This was the first time I have cried since I started the trail. I laid there for a few minutes trying to figure out how bad it was. I heard something pop, which reminded me of when I tore my ACL, so I assumed the worst. I had a deep gash below my kneecap, that was already beginning to swell. I made myself get up and start walking. I could put weight on it, but it still hurt really badly. I did the only thing I could think of, I continued heading north. I made it to the summit of Mt. Garfield and paused to take a few pictures, then I had a very steep, difficult hike down Mt. Garfield. 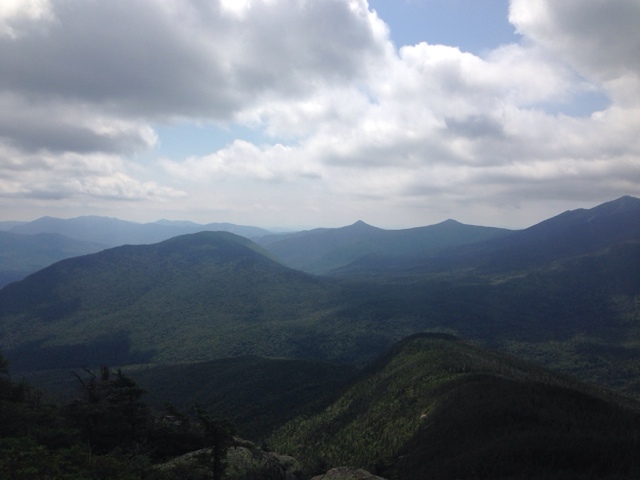 View from Mt. Garfield
As I slowly made my way down the mountain my knee was killing me and I was still crying(just a little). A nice couple out for a day hike stopped to see if I needed any help. I tried to downplay how I was feeling, but they insisted that I stop and let them help me. The man carried a first aid kit and washed my wound and wrapped my knee in an ace bandage. They offered to take my pack and help me down the mountain. I thanked them for helping me, but explained I could get myself down. I couldn't let them carry my pack, that would be slack packing, right?
It took me three hours to hike 3.1 miles to the Galehead Hut, where I was supposed to meet Adios, South Paw, and Outro for lunch. I didn't think they would wait for me and I was super surprised to find them there. As soon as I limped in, they were all concerned. They immediately jumped into action, discussing different plans to get me out of the woods and into a doctor. I quickly told them I was hiking on. By now I was pretty sure that it was nothing serious, just a bad bruise and a little cut. I ate my lunch and we hiked on. By now it was pretty late in the day, 4:00, and we still had six miles to go. I told them I wasn't sure I could make it into camp before dark and they should press on ahead of me. They wouldn't hear it. I felt bad about holding up the group, but they reassured me that it was ok. I had waited for them for 6 days, they didn't mind waiting for me for an hour.
We all made it to camp, but it was almost dark. We quickly ate dinner and went to bed. I was so exhausted that I didn't even write my blog post, I didn't have cell service to post it anyway. 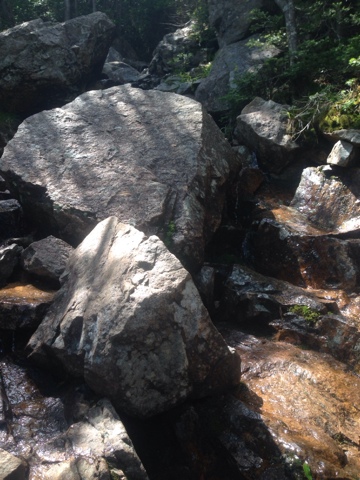 Terrain walking down Mt. Garfield on a bum knee
I have been really fortunate for the last 1,834 miles to not have an injury. I woke up this morning with a bad bruise and a swollen knee, but other than that I'm doing ok. The terrain through the Whites is no joke. I can't believe how much I've had to slow down. I thought my mileage would drop throughout the a Whites because I'd be too tired to do more, but it's because you go so slow. As a group we are barely averaging 1.5 miles per hour, which is just crazy.
We begin the Presidential mountain range in a few days and I'm hoping we will go a little faster through there.
"A keen sense of humor helps us to overlook the unbecoming, understand the unconventional, tolerate the unpleasant, overcome the unexpected, and outlast the unbearable." - Billy Graham
Posted by Yoda at 11:26 AM