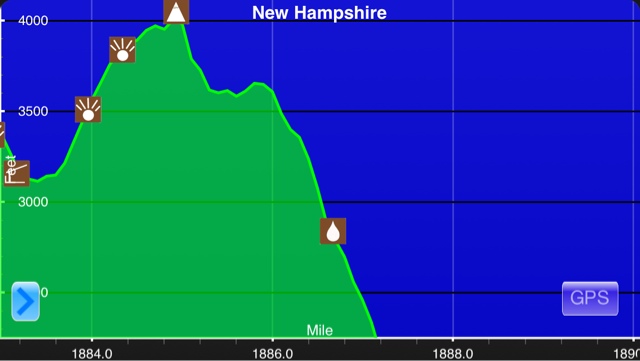 Outro and South Paw were up and hiking  before the sun was fully up. Sadly, I was not. I had to camp in a different area than them and I overslept. It probably had something to do with the loud and obnoxious group of college kids from Havard set up next to me. At 10:30, I politely asked them to quiet down. At 11:00, I told them to shut the hell up. At 11:30, I threatened to use my bear mace on them. They shut up after that. (I don't even carry bear mace) I woke up at 5:30, and was on the trail by 6:15. I made as much noise as possible before I left camp. Since I was running late, I made the poor decision to skip breakfast.
The Whites had one final climb in store for me this morning, Mt. Moriah. I left camp thinking that it would be easy-peasy, but I was sadly mistaken. I'm not sure if it was my sugar laden dinner last night, my lack of breakfast, or just the toll of the Whites on my body, but it was a hard climb for me. In retrospect it was probably all of the above. The climb its self was only 850' spread over 1.4 miles, so it should have been relatively easy. On the way up I got several good views of the Presidential Range and the Carter's. It was a great ending to White Mountain National Forest. 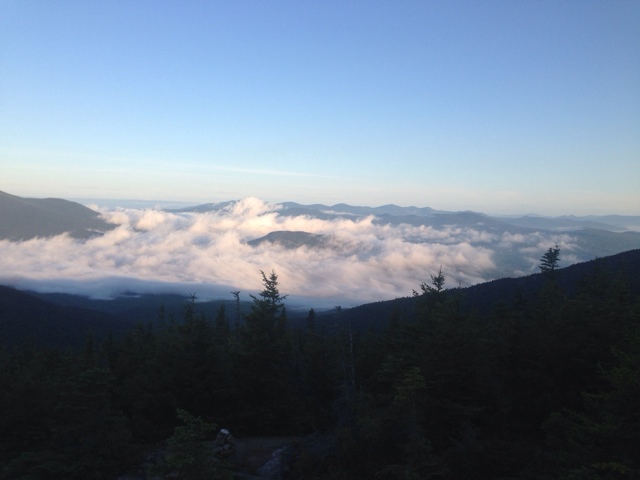 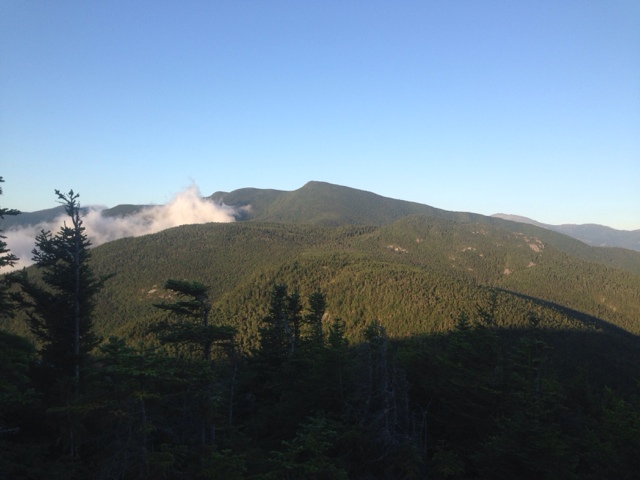 Beautiful morning
I took a few minutes to sit at the peak and eat some breakfast while enjoying my last look at The Whites. As I was sitting there a section hiker named, Camo came by. We chatted for a few minutes and before he walked away he said he always carries something extra in his pack for thru-hikers and gave me a snickers bar. Thanks, Camo. You sure know the way to a hikers heart. 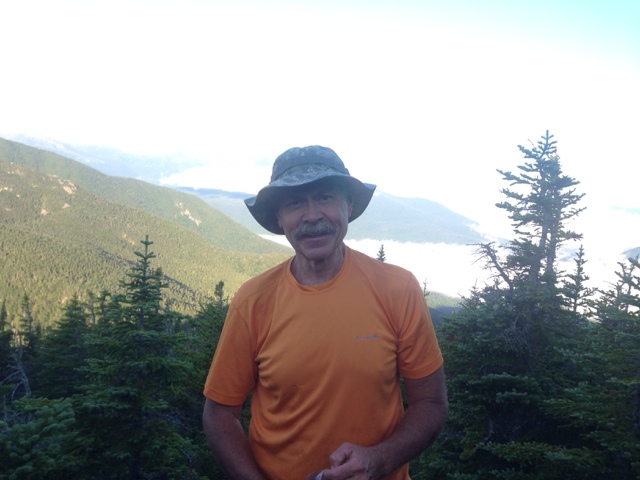 Camo
From this point, I heard the trail was a nice gradual downhill to US 2. I only had 2.5 hrs to make it another 6.6 miles, so I knew I would probably miss my ride back into town. The first part of the "gradual" descent was not very gradual, in fact it was pretty steep. I used my new downhill technique, of sitting down and lowering myself over the steep sketchy sections. After two miles I finally hit the gradual part. I had to cross over bog boards, which usually I don't mind. They are designed to keep my feet out of the mud and I appreciate the trail maintainers installing them. Alas, today the force was not with me. I stepped on a rotted bog board and my foot went straight through. At first I thought I had broken my ankle, but after disentangling myself from the board I discovered that I had just rolled it badly. I limped to the nearest rock and sat down for a few minutes. I gingerly rubbed it and after a little poking and prodding, I decided that I could walk on it. Luckily, the next four miles of trail was easy. I crossed over Rattle River three different times, passed by a shelter, and had some flat trail to hike on. I made really good time, all things considered.
As soon as I reached the trailhead I knew that I had missed the shuttle back to Lancaster. I decided to hitch into Gorham to pick up a few packages I had waiting at the PO. I didn't even have time to try hitching. Iron Lady's friends had come to meet her at the trailhead and they offered me a ride to the PO. Thanks ladies, you made my morning a little easier.
It was a quick trip to the PO, only four miles down the road. I picked up my packages and went outside to check out my goodies. I got my new Luna sandals, which I plan on using as camp shoes and for stream crossings. Thanks to Kassie, Tommy, Alex V, and Sara U, I used your gift cards/cash to buy them. I'm super excited to have proper camp shoes. My flip flops were ultralight, but not very good for being in the woods. 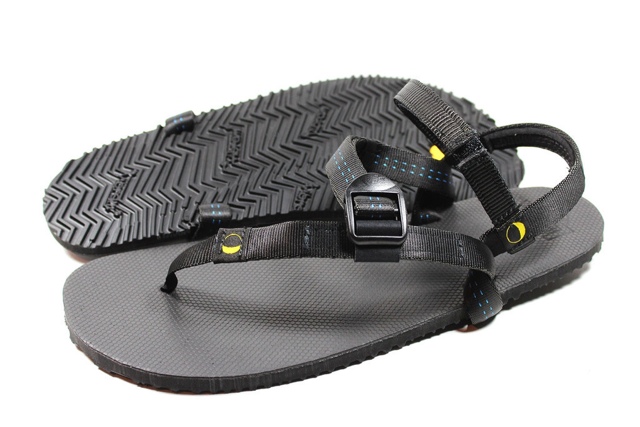 Luna Leadville Pacers
I also received two more packages. Thanks to, Buffalo, for the iTunes gift cards. I'm in the process of updating my music and book selection. You rock! Thanks to another trail angel, who wishes to remain anonymous, for the great selection of gift cards, cash, and food items. Your generosity brought tears to my eyes. I also received an electronic donation for an amazon gift card from, Red Cinema. Thanks, Red. Your real name wasn't included in the email I received, so I wasn't able to email you back personally to say thank you. I downloaded a few new audiobooks to add to my collection.
The tricky part of my morning was getting from Gorham to Lancaster, over twenty two miles away. I've only hitchhiked that far once before and ChampagneJam took care of it. I crossed the street, found a good spot, and stuck out my thumb. Within two minutes a car stopped. The woman driving was old enough to be my grandmother. In fact her grandson, Cheswick, who I met in Dalton, is hiking the trail. I asked her for a ride into Lancaster. She wasn't going that far, but said she could get me seven or eight miles closer. I hopped in, grateful for however far she would take me. We had a nice chat, but before long I found myself on the side of the road again. This time around it took me over ten minutes before a truck stopped. Aaron, was heading all the way to Vermont and agreed to drop me off in Lancaster on his way through. His roommates thru-hiked a few years ago, so he was familiar with picking up hikers. I'm always amazed with how easy it usually is to hitchhike. Before long I was reunited with my group at the Yellow Deli hostel. In fact, I almost beat them back. Their shuttle driver had to make several stops on the way back from the trail.
Everyone was already showered and ready to go eat lunch  I explained that I had messed up my ankle pretty badly and that they should go on without me. I took a nice long shower before I set out to resupply. I went to Subway for lunch, thanks Cynthia, for the subway gift card. Then I went to the grocery store. I didn't need very much and this is the first time that I bought exactly what was on my list, no more or no less. Then I went back to the hostel, wrapped my ankle in ice, and put my foot up. I didn't leave for the rest of the night, except to get pizza next door.
It is supposed to rain tomorrow so everyone is talking about zeroing again. With my badly sprained ankle, I'll take a zero regardless of the rain, but I'm hoping it pours so everyone else will zero too. 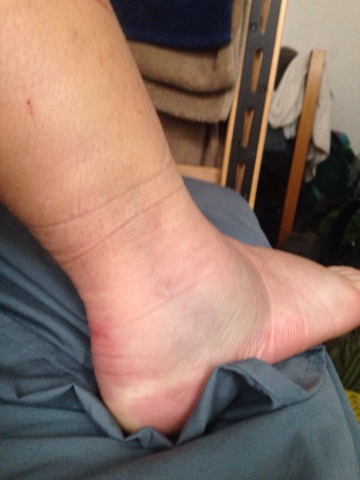 Not good
"Life is not easy for any of us. But what of that? We must have perseverance and above all confidence in ourselves. We must believe that we are gifted for something and that this thing must be attained." -Marie Curie
Posted by Yoda at 8:54 PM