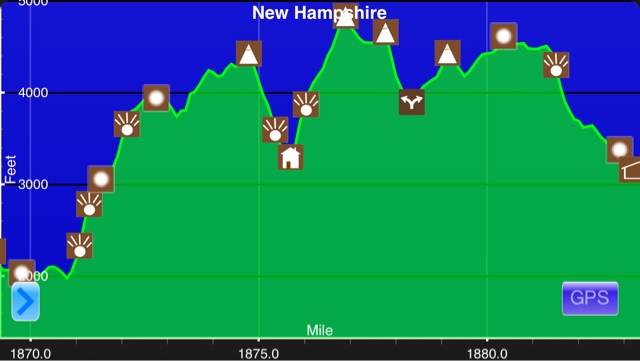 For the last two weeks all I've heard about is how difficult, The Wildcats, are. Every SOBO I've come across has lamented about them. I've read people's blogs ahead of me with the same results. To say we were a little apprehensive going into it would be an understatement. We were up and ready to go at seven, but after a late breakfast and a long drive back to the trailhead we didn't get started until ten o' clock. With such a late start I didn't have high hopes for getting very many miles in today. I looked at my trail guide and decided that I only had two options for camping. The first spot would put me at nine miles for the day, which seemed likely and the second spot would be a thirteen mile day, which seemed unlikely.
The Wildcats are one mountain with five summits, A, B, C, D, and E. Summits A and D are considered 4,000 footers. Peak D has an observation tower and a ski gondola, which is open year round allowing tourists an easy way up the mountain. Unfortunately for us thru-hikers there is never an easy way up the mountain. As soon as I started climbing up the mountain I knew I was in for a long day. It was already really hot and humid out and there wasn't very many water sources along the trail. The climb up to peak D was more of a boulder scramble with rock steps thrown in for fun. 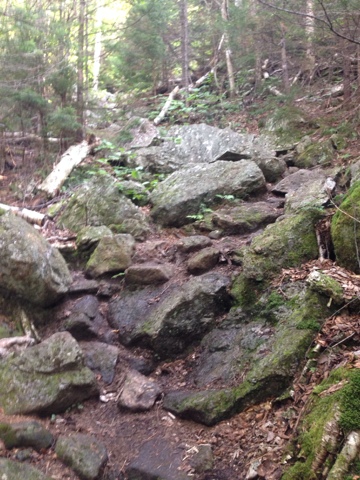 Slick wet rocks are my favorite
As I made my way to the top I kept waiting for the other shoe to drop. The climb was hard, but nothing that I hadn't done before. There was a lot of rock scrambles over exposed ledges. I used to find that disconcerting, but after the climb down Mt. Madison two days ago, my perception of danger has changed.  I took a quick snickers break at the top next to the gondola. There were tourists everywhere, kids screaming, crying and general mayhem. I didn't linger for very long. 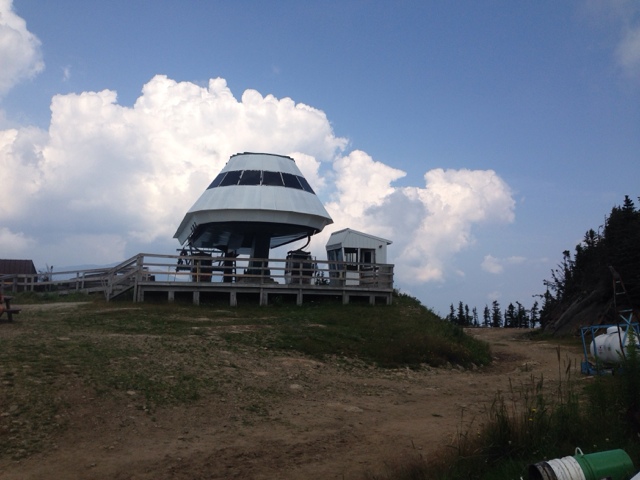 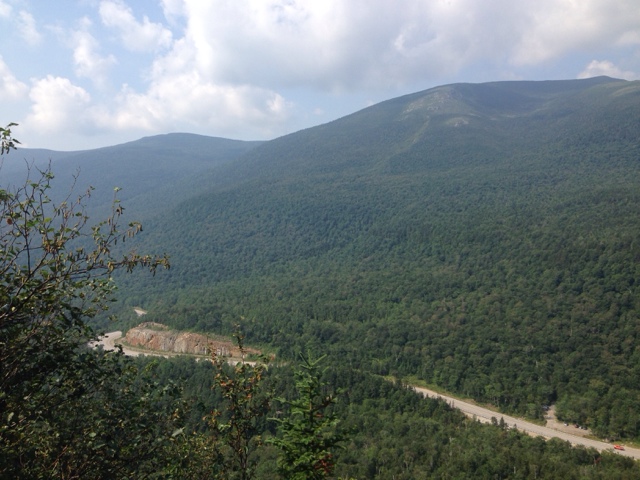 View back down to Pinkham Notch
The next section of trail was just below treeline. I like walking through the sub-alpine forests. There is something about that terrain that I find very calming. Before I knew it, I had climbed up peaks E, D, C, B, and A. The trail reports/horror stories, in my opinion, were way overstated.
The next section of the mountain, Carter Range, isn't technically part of the Wildcats, but it gets lumped into the description. From Wildcat peak A, I had a descent into hell, also known as Carter Notch. From the summit to the notch was only .8 miles, but a total loss of 1,200' of elevation. Once again I had heard horror stories from people ahead of me. One person had described it as, "the ATC walked up to a sheer cliff and decided to put a white blaze leading down". It was definitely a knee buster, but it wasn't as bad as I expected. In a few places I had to sit down and lower myself down so that I wouldn't fall on my face. 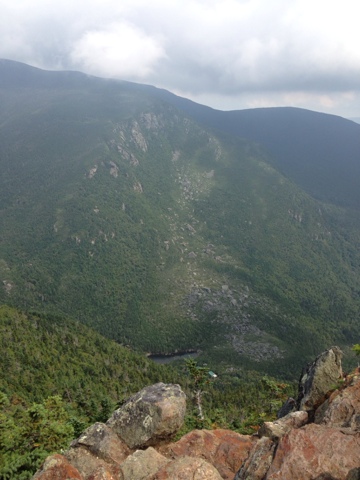 View down into Carter Notch, the green roofed building next to the lake was my destination 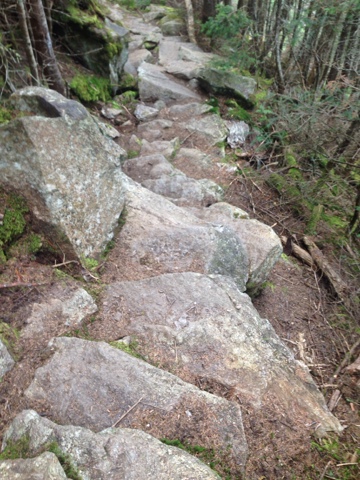 Terrain going down
It took me awhile to carefully make my way down, but I was making better time than I had expected. I had gone 5.9 miles in 4 hours, a far cry from my usual 2-2.5 mile/hour average, but for the Whites I was keeping a pretty good pace. I ate my Subway sandwich at the hut, filled up my water bottles, and prepared for the climb up Carter's Dome. This was definitely one of the steepest climbs I've had to do along the entire trail. I gained 1,500' of elevation over in just .8 miles. It was ridiculous, but the terrain wasn't too bad. There were a lot of rock steps mixed in with a few boulder scrambles. Other hikers made it sound like you need rock climbing gear to get up. I'm not sure why so many people over-hyped this section. Hiking in the Whites is difficult enough, there is no reason to overstate things. 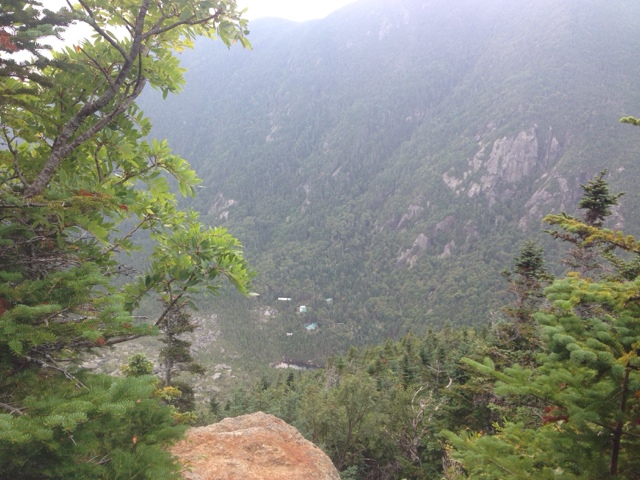 View looking back down to the hut from Carter's Dome
By the time I reached the top of Carter's Dome, I had drank almost all of my water. I wasn't to concerned because even though there wasn't water listed for another 6.5 miles, I had been told that Zeta Pass, only three miles away, had water. 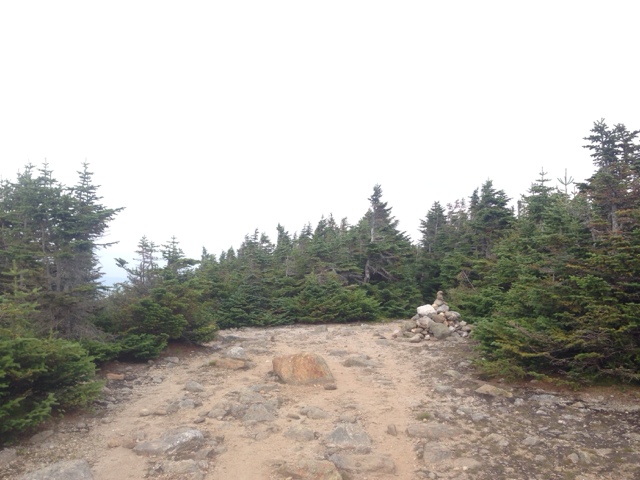 Bald spot on Carter's Dome
I had a tricky little climb down to Zeta Pass. I had to sit and lower myself down repeatedly, which I don't mind doing. It insures that I don't fall flat on my face and kill myself. When I finally made it to Zeta Pass, I discovered that the small stream was dry. I had been toying with the idea of camping there, it was the camp spot nine miles away from where I started the morning, but without water that wasn't going to happen. I was going to have to hike the 4.6 miles to Imp Campground, but time was running out. In normal terrain I would have plenty of time to make it there, but the Whites aren't exactly normal. I had two more peaks to climb and another tough downhill to make it to Imp before dark. I hurried as fast as I safely could. I caught up to, Iron Lady, who I haven't seen since Bear Mountain in New York. We chatted for a few minutes while climbing up, Middle Carter. I'm much faster than her on the uphills, but she would quickly catch me on the downhills. She was nice enough to point out that I used to be a hiking machine, but my gears must be broken because I'm so slow on the downs now. I laughed as she quickly pulled away from me. Oh well, maybe one day I'll get my confidence back and fly down the hill again. 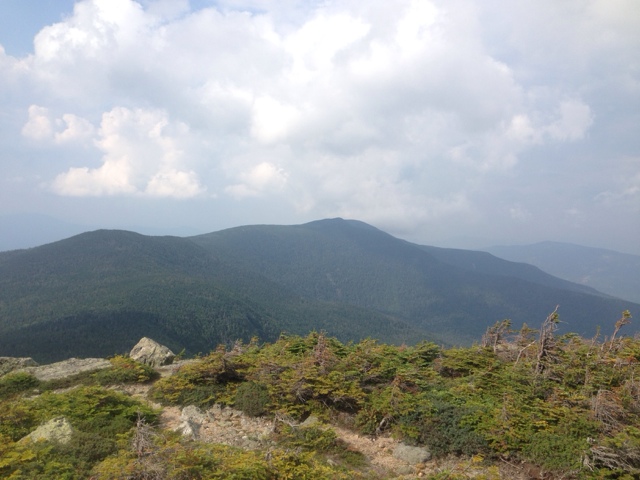 Hazy view from Middle Carter
I ended up making it to the camping area just before dark. I was surprised to see Outro and South Paw there. I thought they were going to hike a few miles farther so they could have an earlier day tomorrow. They had run out of water as well and decided they had had enough for the day. Adios made it to the next shelter, six miles away. I telling you, that kid is a hiking beast. Fiddler and Neemor ended up making through the entire 21 mile Wildcat section. They spent the night back at the hostel. I was impressed!
I ate a quick dinner, which consisted of two snickers bars, a bag of peanut m&m's, and two liters of water. Then I set up my hammock. I didn't hang my tarp because there was a zero percent chance of rain. From where I was hanging, I could see the stars. I set my alarm for 4:30, so that I would be out of camp by first light. I had eight miles to hike in the morning. If I wanted to catch a ride back to the hostel I had to be at the road by 9:30, which was a very tough goal for me.
The best part of the entire day was that I didn't fall down. I managed to stay on my feet for an entire day. That was the first time since I started hiking in the Whites that I had not fallen. To say I was pleased with myself doesn't quite capture the moment.
"There was never a night or a problem that could defeat sunrise or hope."
-Bernard Williams
Posted by Yoda at 2:39 PM