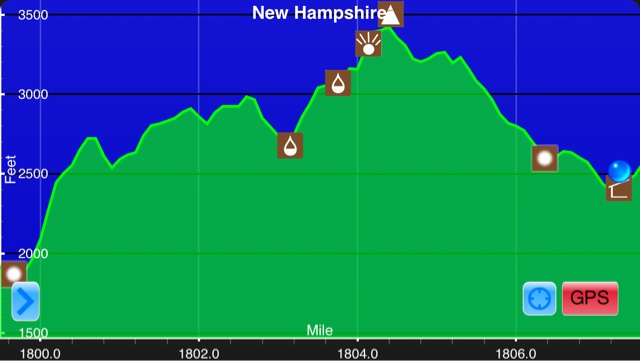 Before we all went to sleep last night, we decided to get up at 7:30. We wanted to get back to the trail at a decent time. Well, that did not happen! We got up around 8:30 instead. By the time we packed our bags and got breakfast it was 9:30. On our way to breakfast we saw, China Rock. She had stayed at the same motel as us. We all went to get breakfast together. As we ate our breakfast sandwiches, we caught up with  her on what she has been up to.
We walked to the edge of town to hitch hike back to the trail. Within minutes a truck pulled over and offered us a ride. We piled into the back. 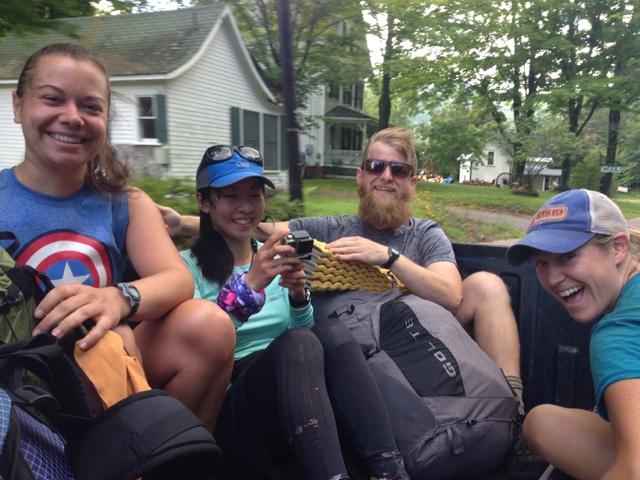 Excited to get an easy hitch
Unfortunately, the driver could only take us halfway. So once again we found ourselves on the side of the road with our thumbs out. Luckily, we didn't have to wait for long, another truck pulled over and took us the rest of the way. Despite our earlier plans to get an early start, we didn't start hiking until eleven o'clock.
Our first part of the hike was a difficult climb. We gained almost 1,000' of elevation in less than one mile. Yesterday's rain turned the trail into a muddy, slippery mess. We climbed for almost a quarter of a mile before we took a quick break. We had reached the 1,800 mile mark. Adios was surprised to find out that I was the person making all of the signs. Everybody was excited to pitch in and help make this one, it was a collaborative effort. 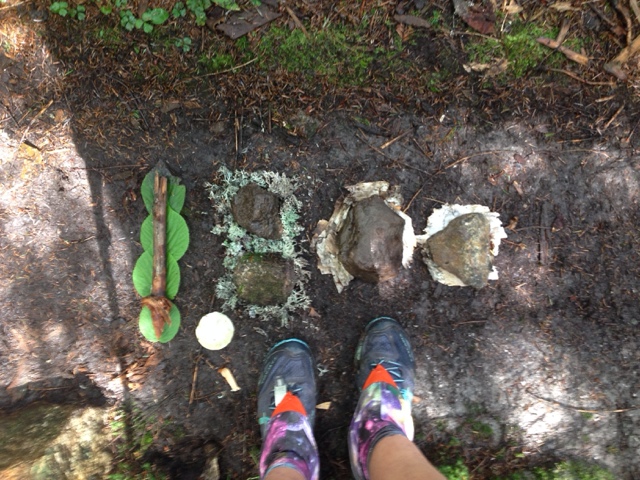 1,800 miles done, 389.2 to go
We didn't celebrate for long, we were way behind schedule and trail conditions were subpar to try to make up for lost time. We quickly spread out. I'm not used to being the slowest person in the group. As I fell farther and farther behind, I started to get irritated with myself. No matter how hard I tried to keep up, I just couldn't. I can hold my own going uphill, but I'm just too slow going downhill. I guess I'll have to start leaving before everyone else in the morning. I don't like feeling like I'm holding up the group.
Just before lunch, I crossed paths with a female SOBO thru-hiker. She looked very familiar to me, but I couldn't place her. I found out later in the day that it was, Ghost. She holds the record for the fastest unsupported thru-hike on the PCT. She got the name because she is like a ghost, you never really see her. She hikes from sun rise to past sunset, covering up to fifty miles per day! She had started today at Mt. Washington, which is over fifty miles from where I'm camped tonight. That is just crazy!!! The difference between her and Scott Jurek, is that she is unsupported. Which means she carries everything she needs just like me. Jurek had a support team that met him at road crossings to feed him. He had an RV to sleep in every night. She won't come close to breaking his record, but she might beat the unsupported record for the AT. In my opinion, she is way more impressive than Jurek.
My 7.5 miles hiked today, felt more like 20 miles. I only had two climbs today, but they were both steep and difficult. A few times I had to put my poles away and scramble up slick rocks. 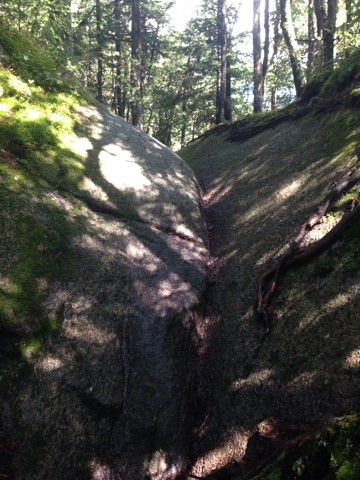 No good using hiking poles
After scrambling over rocks, I would inevitably have to dodge mud puddles until it was time to scramble over more boulders. 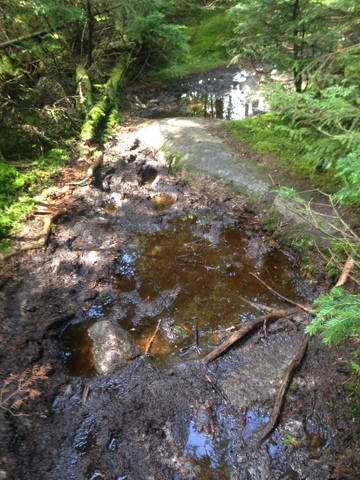 Muddy trail
It is so difficult to get into a rhythm when the trail is like this. It is also hard to stay focused for such an extended period of time. One wrong step means ankle deep mud. I did a pretty good job avoiding that, but by the end of the day my feet were soaked anyway. 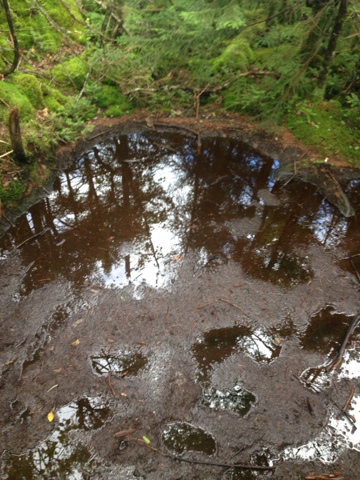 Impossible to keep your feet dry through this
On the way down, Wolf Mountain I had a pretty scary fall. My left foot caught a slippery rock and I started to go down. Just as I caught myself, my right foot got caught up in a root. I ended up falling hard on my right knee, and twisting my left knee. The right knee took most of the impact and I was left with a small gash on my kneecap. I was more concerned with the left knee though because it's my bad knee. I had surgery on it several years ago to repair a torn meniscus, acl, and mcl. It has given me problems ever since. I laid on the ground for a minute trying to assess the damage, other than the bloody right knee I seemed to be ok. I slowly got up and tried to walk, it was definitely sore, and I'll probably be bruised tomorrow, but I'll survive.
I only had a few more miles until the shelter so I slowed down, even more, and picked my way across the muddy trail. By the time I got to Eliza Brook shelter, I was limping pretty bad. Outro, Adios, and South Paw were already at the shelter when I arrived. Since I was limping, I couldn't hide the fact that I had fallen. Coincidentally, South Paw and a few other hikers fell down today too. I was starting to think that I was the only person out here that ever falls down.
Right before I made it to the shelter, it started to rain. The shelter was supposed to be a rally point for us. Just a place to meet up at before we headed back out, but because of the rain and the time, it was 4:00, we decided to call it a day. Everyone was tired, muddy, and wet. A hot meal and a good nights sleep was too hard to turn down. The rain didn't last long, so we were able to set up camp and cook dinner at a decent time.
Tomorrow is supposed to be a really hard day, but the views should be incredible. After sitting down and eating dinner my knees both feel better. Tomorrow is a new day and I'm excited for the epic views from Kinsman Mountain.
"Mother Nature comes up against reality, and the reality is that the system doesn't work."  -John Garamendi
Posted by Yoda at 6:45 AM