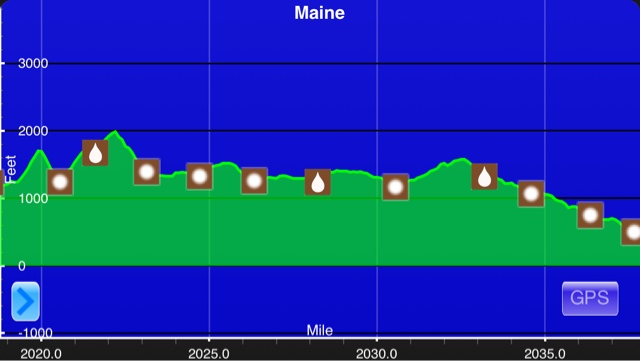 Today was just a lovely day. I woke up before my alarm and was pumped to get the day started. I had to hike 18.9 miles before four o'clock due to a ferry schedule. The trail crosses the, Kennebec River, which doesn't have a bridge. The official way across is a canoe ferry service and it's last scheduled run for the day is at four. I ate a quick breakfast, which consisted of a berry and cream cheese danish, and was hiking by 6:45. Crazy thing about that danish is that it was 500 calories. I can't imagine eating that in the real world. In fact, it was so sweet that I could only manage to get half of it down.
From looking at the elevation profile for the day I was pretty sure that I could make it to the river before the final ferry run. If you haven't figured it out yet, I'm always up for a good challenge. I was sad to leave my awesome camping spot on the lake. I could hear a mama moose calling to her babies, but the lake was enveloped in a deep fog and I couldn't see a thing. This 19 mile section of trail didn't have a single mountain for me to climb. I haven't had that happen since Pennsylvania. I had a few hills to go over, but nothing major.
It was another chilly night, which made for a cold start to my hike. It was 48 degrees when I started. I hiked as fast as I could just to stay warm. I ended up keeping that pace going all day. A few posts ago I mentioned that fall is beginning here. I'm starting to see more evidence of that everyday. It's still warm during the day, but the nights are getting progressively colder. The leaves are starting to turn, even at lower elevations. 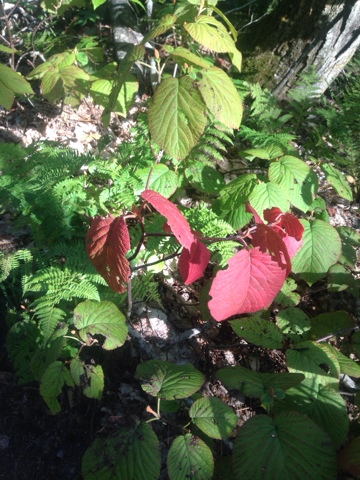 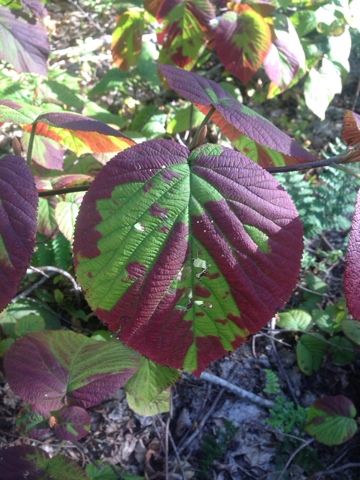 Pretty neat. In Florida we only have two seasons, green and not as green
For a majority of the morning, I hiked alongside the lake. It made for a nice start to the day. Eventually the trail turned away and I found myself wandering back through the woods. I walked through lowlands, bogs, and pine forests. I passed by several ponds, streams, and brooks. I was however, almost bored. I've gotten so used to the difficult terrain, that I found it hard to relax. Eventually, I settled into a nice pace and was able to enjoy the day. 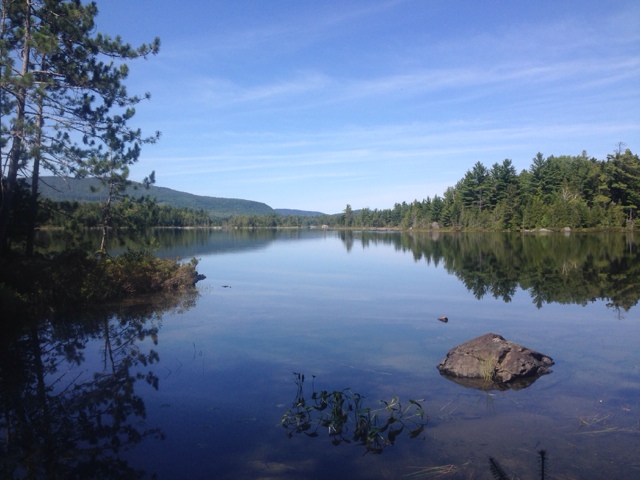 I think this was still Flagstaff Lake
For more information about the creation of Flagstaff Lake, check out the comment section from yesterday's blog. Michael Butler posted some great historical info. A little more history about this area for you; I hiked along an area called The Great Carrying Place. This section of trail is a remnant of the Revolutionary War. 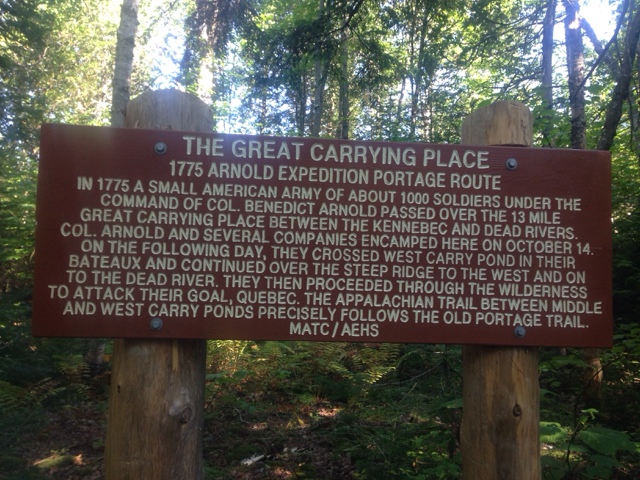 Dropping some knowledge on you
I honestly don't remember a lot of the details from today's hike. It was all kind of a blur. I hiked really fast, really far, over mainly flat terrain. There was a lot of muddy and rooty sections that would temporarily slow me down, but then it would go back to easy hiking. At one point the trail went so close to a pond, I though I was going to have to swim, but luckily there was a small dam to walk over. 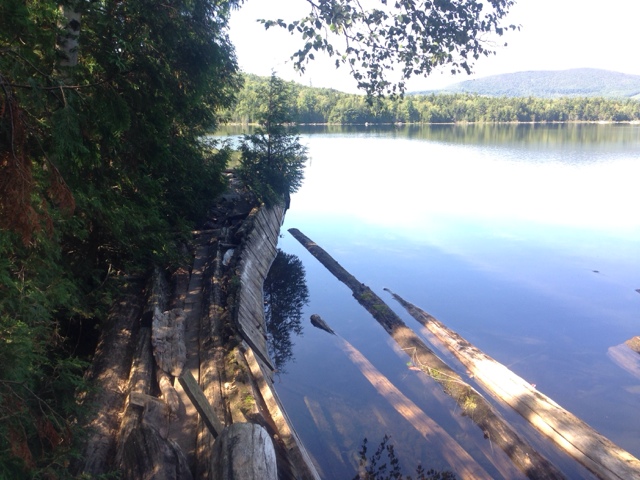 Tiny dam
I walked through a nice section of cascading streams, that included a sketchy log bridge crossing. 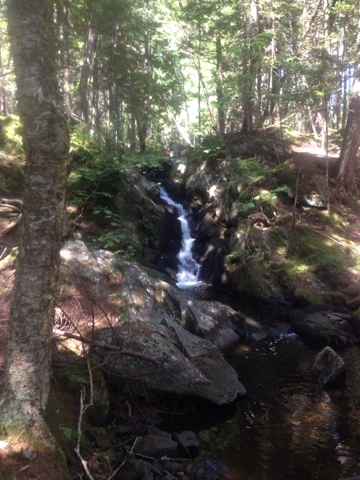 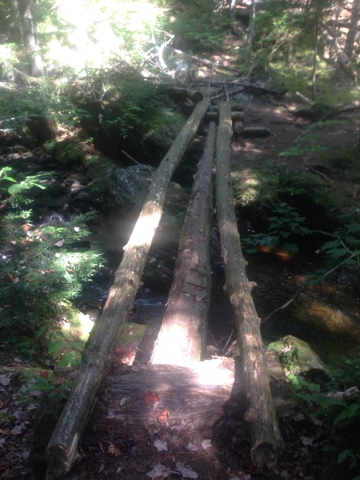 Sketchy log bridge
I didn't make it to the ferry crossing at four, I got there at two. That's right, I did 19.2 miles before two o'clock!!! I haven't don't that kind of mileage that quickly since Shenandoah National Park. 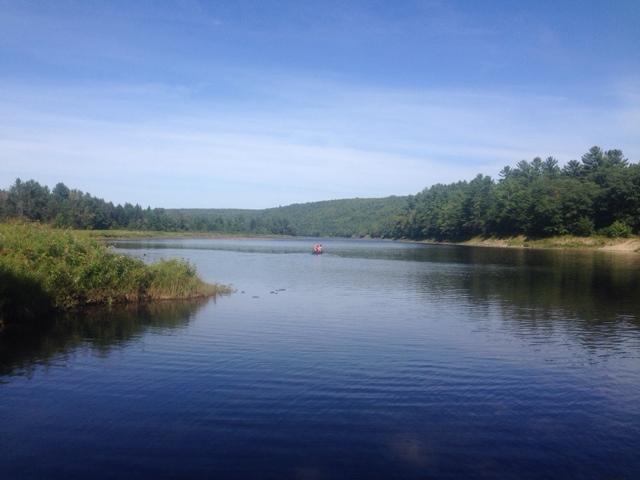 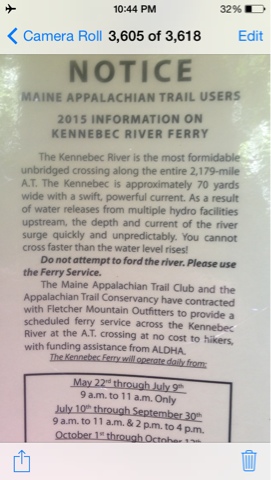 Info about the Kennebec River Ferry
Once I made it across the river it was a short walk to Caratunk. There is not much in this town. The walk down Main Street was like something out of a horror movie. Calling it creepy doesn't do it justice. I found my way to the post office, which was closed, but has a free phone to call the hostel for a pick up. They scooped me up in a matter of minutes. It was a short drive to, The Sterling Inn. After checking in, I went about doing my town chores as fast as I could. I went through my resupply box that my parents had sent. Thanks General and Hannibal. Then I showered and started my laundry. I was very surprised to see so many familiar faces here. Uncle D and Quahog are staying here, but the biggest surprise was seeing Pace Car. I thought she was three days ahead of me. We spent a few minutes catching up and made plans to have dinner together. I sorted through my food and came up with a plan for the next few days.
The owner of the hostel gave us a ride to the pub down the road. The service was slow, but the found came in huge portions. I created my own burger, lettuce, sautéed onions, cheddar, guacamole, chipotle aioli, and a fried egg. It was delicious. Pace Car had the fish and chips, which was also a big portion.
After the past six days of doing long mile, fast paced days, I'm extremely exhausted. I have an aggressive end date in sight and the plane tickets have already been purchased. It's go time!!!!
"To those who would see the Maine wilderness, tramp day by day through a succession of ever delightful forest, past lake and stream, and over mountains, we would say: Follow the Appalachian Trail across Maine. It cannot be followed on horse or awheel. Remote for detachment, narrow for chosen company, winding for leisure, lonely for contemplation, it beckons not merely north and south but upward to the body, mind and soul of man." –MYRON AVERY
Posted by Yoda at 9:10 PM