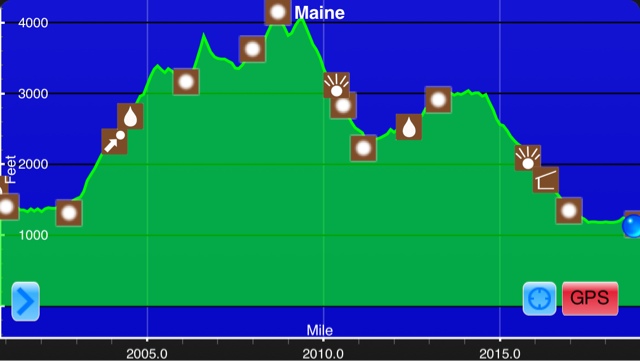 Maine reminds me of that crappy boyfriend you are about to dump. You're sick and tired of the way he treats you and you don't see any redeeming qualities in him. Just when you're getting ready to pull the trigger and breakup with him, he does the most amazing thing. You start to think that maybe you were too hasty and you decide to give him a second chance. From this point on he is on super secret probation. That is exactly how Maine has been for me. I thought this state was going to be great. I'd already put in the hard work and figured I could cruise through until the end. Then Maine decided to be an ass. It has treated me horribly. All these ups and downs, wet and slippery rocks, and not a single switchback to be had. Well today was Maine's way of trying to get me to not dump it. Yes, it was a brutally difficult day, but it was also an amazingly beautiful day. So from here on out, Maine, you're on super secret probation. I'll decide when this is all over if there was enough redeeming qualities for you to be a keeper.
I was up at 5:30 this morning, but since my roommates were still asleep I didn't get up right away. Uncle D, who I had never met, but knew about from Airlock, and Quahog, who I haven't seen since Mt. Rogers visitor center in VA, were staying in the same bunkroom as me. We stayed up way past hiker midnight. Uncle D was making arraignments for his wife to come meet him at the end of the trail,  Quahog was watching movies in the common room, and I was catching up on my blog. I finally got up at 6:00, I was anxious to get started on the trail today. South Paw told me about an amazing campsite and if I wanted to make it there I had to do an eighteen mile day over some really big mountains. I knew I'd need all of the day to make it there. 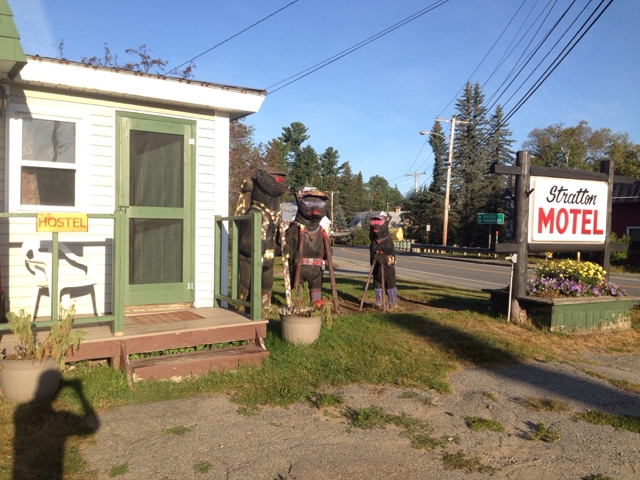 Stratton Motel Hostel
The shuttle back to the trail wasn't scheduled to leave until 8:00, so I decided to hitch back. The first car to stop was a van full of nine Hispanic men. There wasn't even a place for me to sit. They all agreed that I could just sit on someone's lap. Well, that's not creepy at all!!! I said, thanks but no thanks. A few minutes later an old school VW bus pulled over. The guy seemed familiar with picking up hikers, so I hopped in. The only thing wrong with him was his LSU hat. After only a few minutes he had me dropped off next to the trailhead. Another successful hitch!
The trail started off very easy. I cruised through the first two miles in less than an hour. Unfortunately, it didn't stay easy for very long. While I was still on the easy section I made a major mistake, I passed up two really good water sources. That would come back to bite me in the butt later in the morning. My trail guide showed that I had plenty of reliable water sources throughout the day, but it was wrong. The water sources I came across were all dry or had signs posted saying that hikers had reported getting sick from that area. The signs suggested filtering and using chemicals before drinking. I only have a filter now, I haven't used Aqua Mira drops since New Jersey, so I don't carry that anymore.
I had a ridiculous steep climb to Horns Pond Lean-to. By the time I got there I was really thirsty and had drank half of my water. I had planned on filling up there, but the spring was dry. There was a pond there were I could have gotten water, but it was off of the trail and I didn't want to take the time to get it. I thought there would be more water a little farther down. 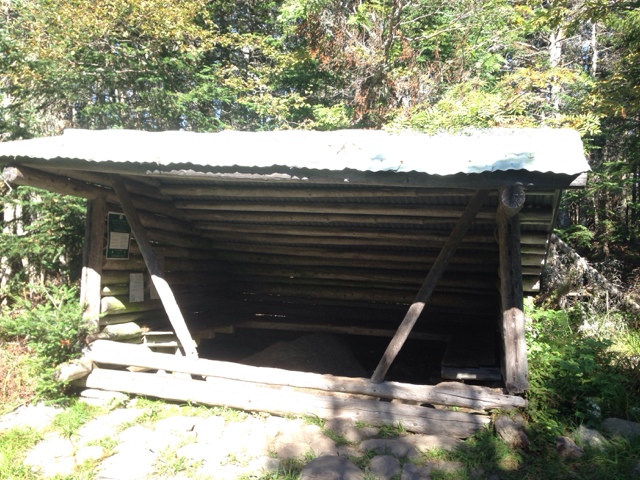 Original shelter built in 1937, not in use anymore 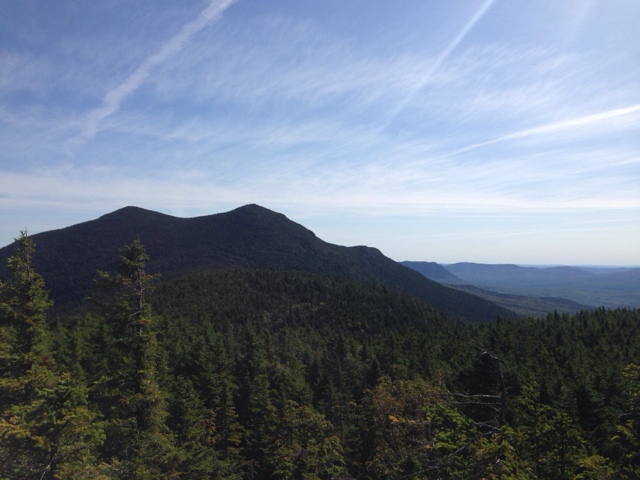 View of the next mountain I had to climb, North and South Horn
At this point I still wasn't too concerned about the water situation. I had over half of a liter and there were plenty of water sources listed in my guide. The climb up the Horns wasn't as bad as I expected, but that's not saying much. These days I always expect the trails to be steep and to include boulder scrambles. 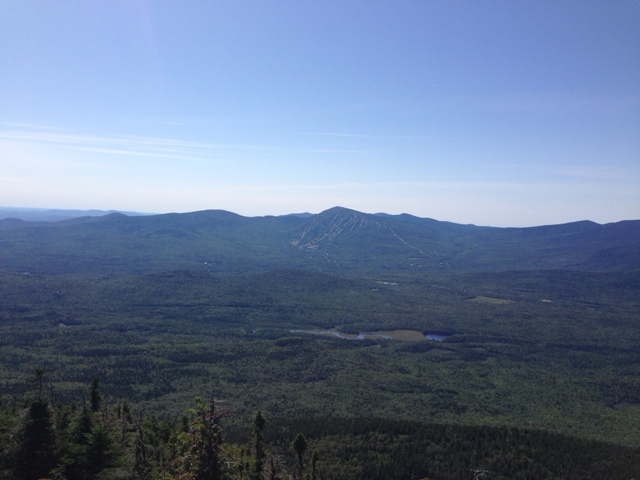 View from South Horn
After climbing up South Horn the trail went down a few hundred feet, only to go back up several hundred feet. I didn't really mind this climb. Everyone talks about how amazing the view is from the west peak of Bigelow Mountain and it lived up to the hype. The climb up to the west peak wasn't anything I haven't done before. It was steep and involved some rock scrambles, but it's been such nice weather lately the rock scrambles were actually fun. 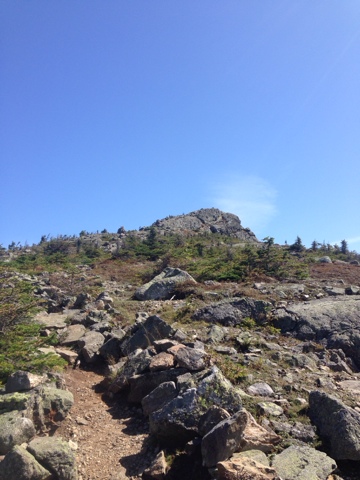 That moment you think you're at the summit, only to see you have further to go still 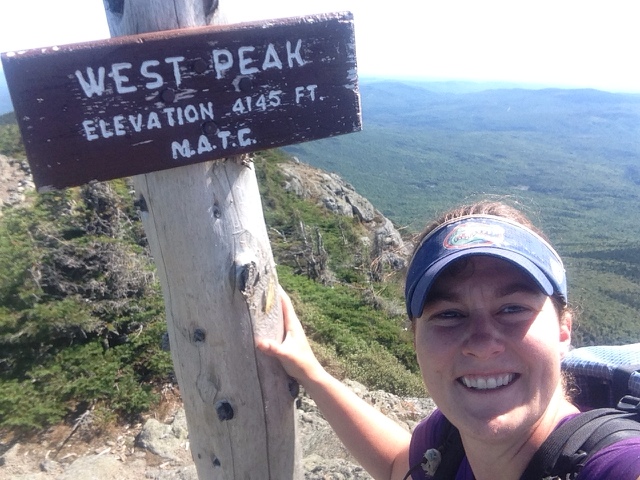 Finally at the top 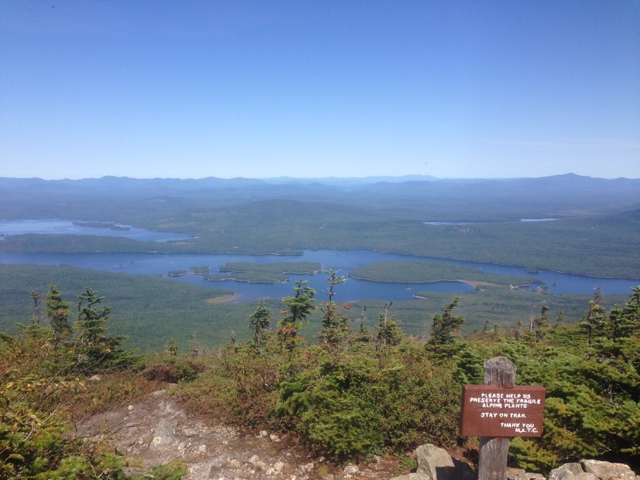 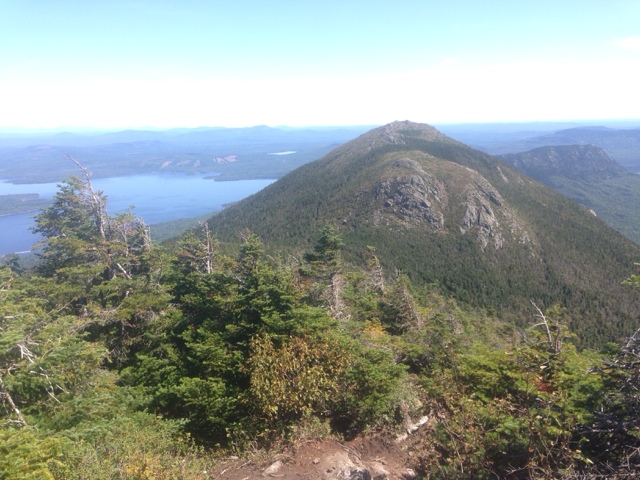 View of Avery Peak and Little Bigelow
The trail descended from West Peak, only to go right back up to Avery Peak. The climb up, Avery Peak, was also difficult and taxing, but once again I got great views. 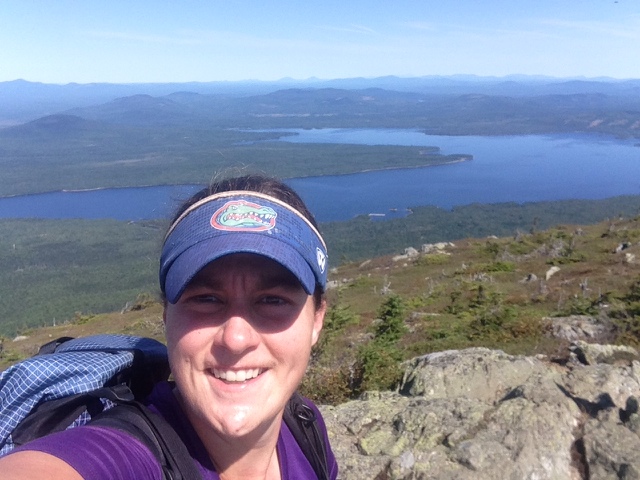 Top of Avery Peak
Avery Peak gets its name from, Myron Avery. Avery was one of the driving forces behind the creation of the AT. 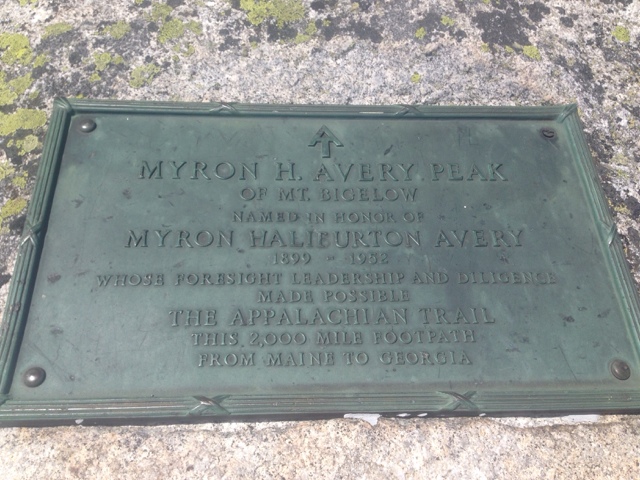 Plaque commemorating Avery
Avery Peak of the Bigelow Mountain Range marks the last time until Katahdin that the trail goes above 4,000 feet. Which means that I won't be above treeline again until I finish the trail.
Now the unfun part of my day began. I had a three mile descent from Bigelow Mountain. After the five mile descent yesterday my knees were still hurting. It wasn't long until they were on fire. I was also almost out of water. All of the sources I came across were dry. It was getting hotter out by the minute and I was quickly becoming dehydrated. By the time I reached the end of the downhill I was parched. My trail guide said I was one mile from a reliable water source, so I pushed myself hard to get there. When I arrived at the spring I knew I was in trouble, it was almost dry. It was really just a puddle. I didn't really have another option, I had to use it. This is the first time I have collected water from a source that wasn't flowing. I guess in 5-7 days I'll know if that was a mistake. 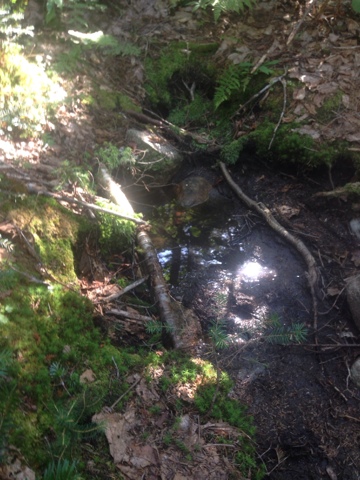 Stagnant water
The climb up to Little Bigelow Mountain was supposed to be a nice gradual uphill, but it sure didn't feel like that. Maybe it's because I let myself get dehydrated, or maybe it was my lack of calories, but that climb sucked. On paper it didn't look like much, but in reality it was a lot of steeps ups, followed by short downs. I was glad to finally make it to the top, even if it wasn't the greatest view. 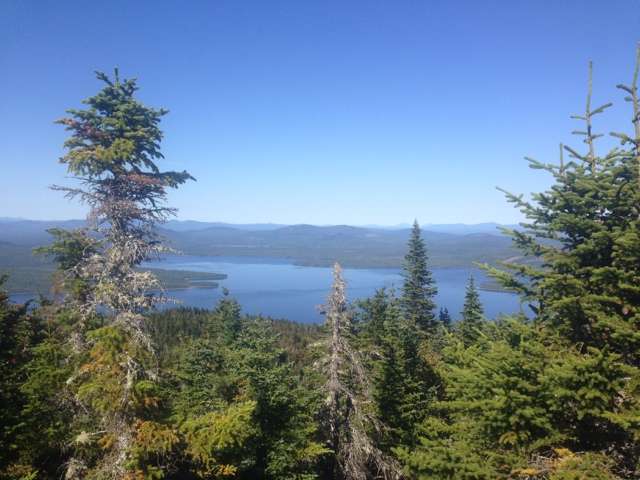 Little Bigelow Mountain
My day ended with another three mile downhill. At this point I was utterly drained and my knees and ankle were shot. I'm still not sure how I made it all the way down without falling.
I finally made it to the campsite that, South Paw, had told me about. I'm camped next to the shore of Flagstaff lake. I even have the place all to myself. With this being Labor Day weekend, I expected the lake to be packed. I guess I just have good timing. I quickly set up camp before heading down to the lake for dinner. This is my all time favorite camping spot. It was the perfect end to a hard, but beautiful day. 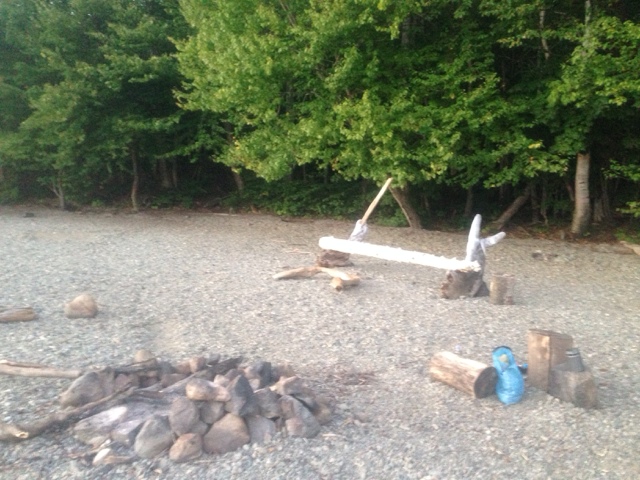 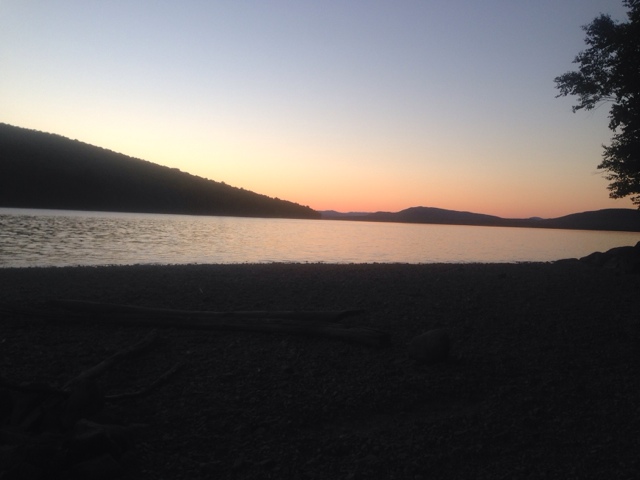 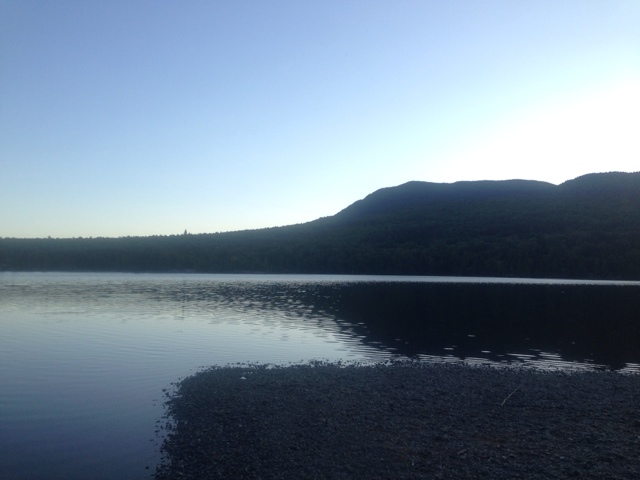 Little Bigelow as seen from the lake
"Things turn out best for people who make the best of the way things turn out." John Wooden
Posted by Yoda at 6:58 PM