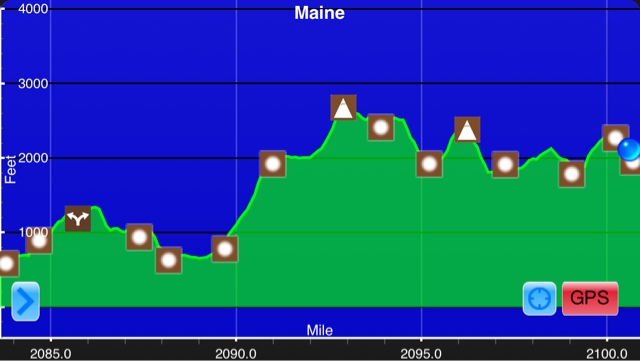 Have I mentioned before how much I dislike slippery, wet rocks? Let me set the record straight; I hate slippery, wet rocks. I've been really lucky with the weather lately. I can't remember the last time it rained. The consensus on the trail is that the beginning of the 100 mile wilderness is hard, but very manageable... unless it rains. Which, of course, it did last night. The first forty miles of the wilderness is over granite boulders, roots, and muddy bogs. The rain didn't make going over any of that easier.
Blade and I got up early today so that we could do an eighteen mile day. Almost as soon as we started hiking this morning one of his shoe laces decided it had had enough of hiking and broke. While he took the time to stop and repair it I hiked ahead. I made it to the Wilson Valley Lean-to shortly after. I met up with Laces and we hiked out together. Even though the trail conditions were less than ideal, we were making good time. When we reached Long Pond road we saw a sign for trail magic. Even though we were in a hurry today we took the time to checkout the trail magic. It was located a quarter of a mile off of the trail, but it was well worth the walk. We walked down the gravel road for a while, before coming to a cabin in the middle of the woods. We were offered beer and soda, so I drank an ice cold coke. While Laces, Blade, Smoke Break, and I enjoyed our drinks, Scout threw some hotdogs and hamburgers on the grill. While we ate our second breakfast, Moxie, a MTC ridge runner, gave us advice on the upcoming terrain, good stealth locations, and info on Baxter State Park. The hotdogs and hamburgers were delicious and the advice was much appreciated. Trail magic in Maine has been very infrequent, so this was fantastic. 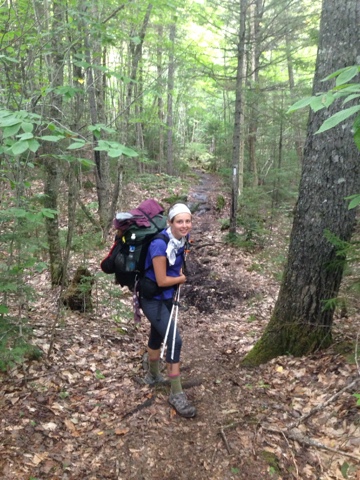 Laces
After fueling up at the trail magic we had a sketchy stream crossing. Laces and I managed to stay dry, but Blade slipped on a rock and fell in. Half of his pack got wet and he lost a croc. Luckily, Zen was able to grab it for him before it was washed away.
Once we were done fording the stream it was time for the climbing to begin. We had five mountains to climb today and all of them had difficult terrain. The first one on the list was, Barren Mountain. Barren had several different sections were we had to climb over granite slabs. It was steep and time consuming due to the wet conditions. Any section of dry rocks that we came across were more difficult to climb because of our wet and muddy shoes. The theme of the day was, walk through mud, slide over roots, and slip on rocks. 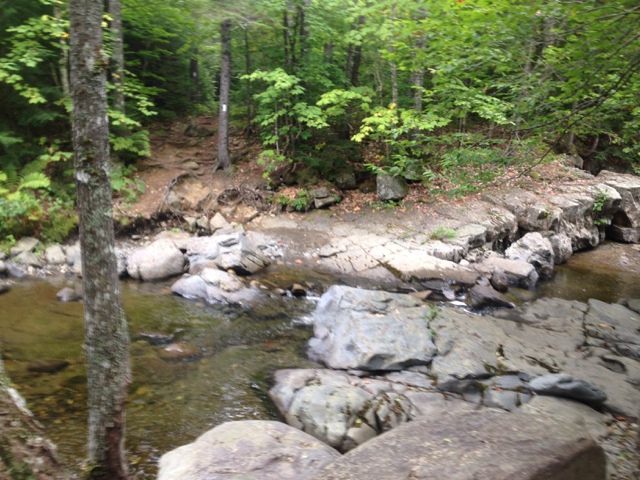 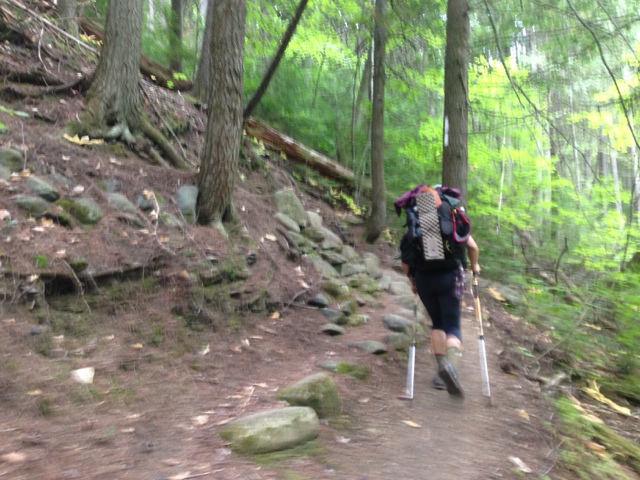 One of the few easy sections of trail 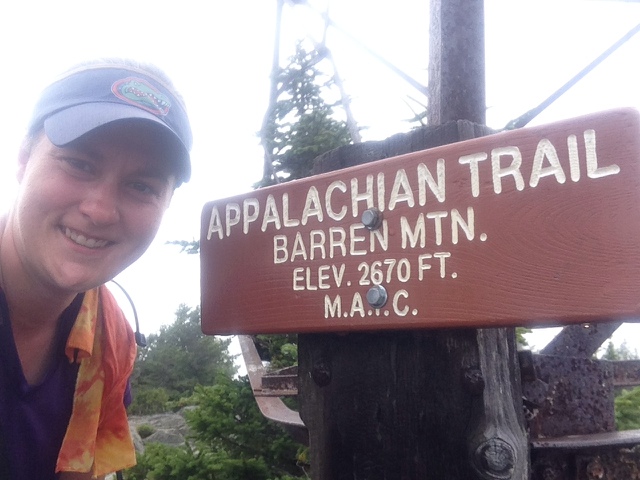 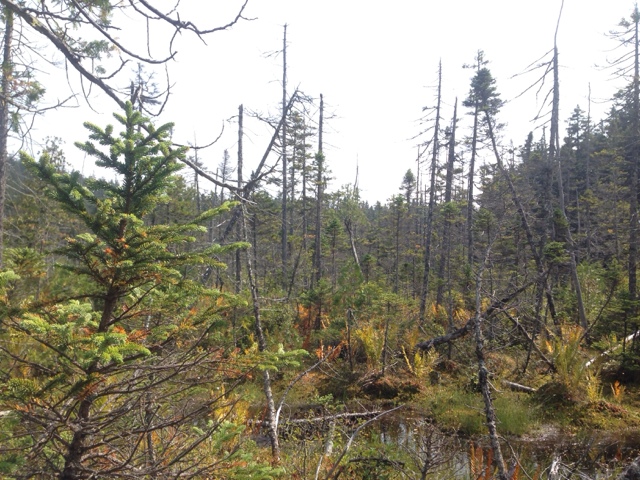 3rd Mountain
Just before the day ended, I crossed the 2,100 mile mark. It was a bittersweet moment. That was the last hundred mile mark of the journey. I got my wish, nobody else had made the sign yet, so I got to do the final one. I wanted to make it really grand, but just as I started to make it a storm rolled in. We could hear thunder really close by. I decided to go with a simple design so I could make it to camp before the storm. 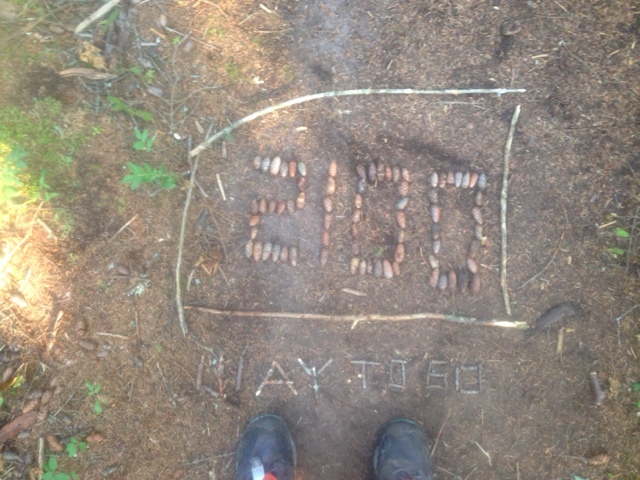 2,100 miles down, 189.2 to go
After each mountain the group would sit down and take a snack break. The constant ups and downs, with no views seemed to zap our energy. I'm around so many other hikers now that I feel like I'm back in Georgia. Every time I stop, I see a parade of thru-hikers go by. Every time one of them stops, I pass them by. I've been hiking around or with, Zen, Baltimore, Burn Out, Click, Pie, Cheesebeard, Smoke Break, Clarity, Oscar Mike, Forgetful Jones, and Laces.
It is a really fun way to go through the wilderness, but it makes it difficult to find a place to camp. Tonight the shelter area is packed. It's like a tent city. I found a less than ideal spot for my hammock a few hundred feet from the shelter, next to Blades tent. Just as I finish hanging up my tarp it began to pour. It was actually raining sideways and the lightning was right overhead. For the first time in 2,100 miles my hammock and underquilt got wet. I guess I've always been lucky that the rain has never blown in before. I couldn't even cook dinner without getting wet, so I settled for a few snacks out of my foodbag instead. By the time the rain let up enough to cook, it was late. I stayed up for a while talking with Clarity and Blade. Once I finally went back to my hammock I fell asleep almost immediately. This terrain is wiping me out.
Tomorrow promises to be more of the same. Lots of ups and downs over rocks, roots, and mud puddles. I can hardly wait to get started in the morning.
"Nothing in the world can take the place of persistence. Talent will not; nothing is more common than unsuccessful men with talent. Genius will not; unrewarded genius is almost a proverb. Education alone will not; the world is full of educated derelicts. Persistence and determination alone are omnipotent."
– CALVIN COOLIDGE
Posted by Yoda at 7:28 PM