Day 10- My Pain Gives Me Strength 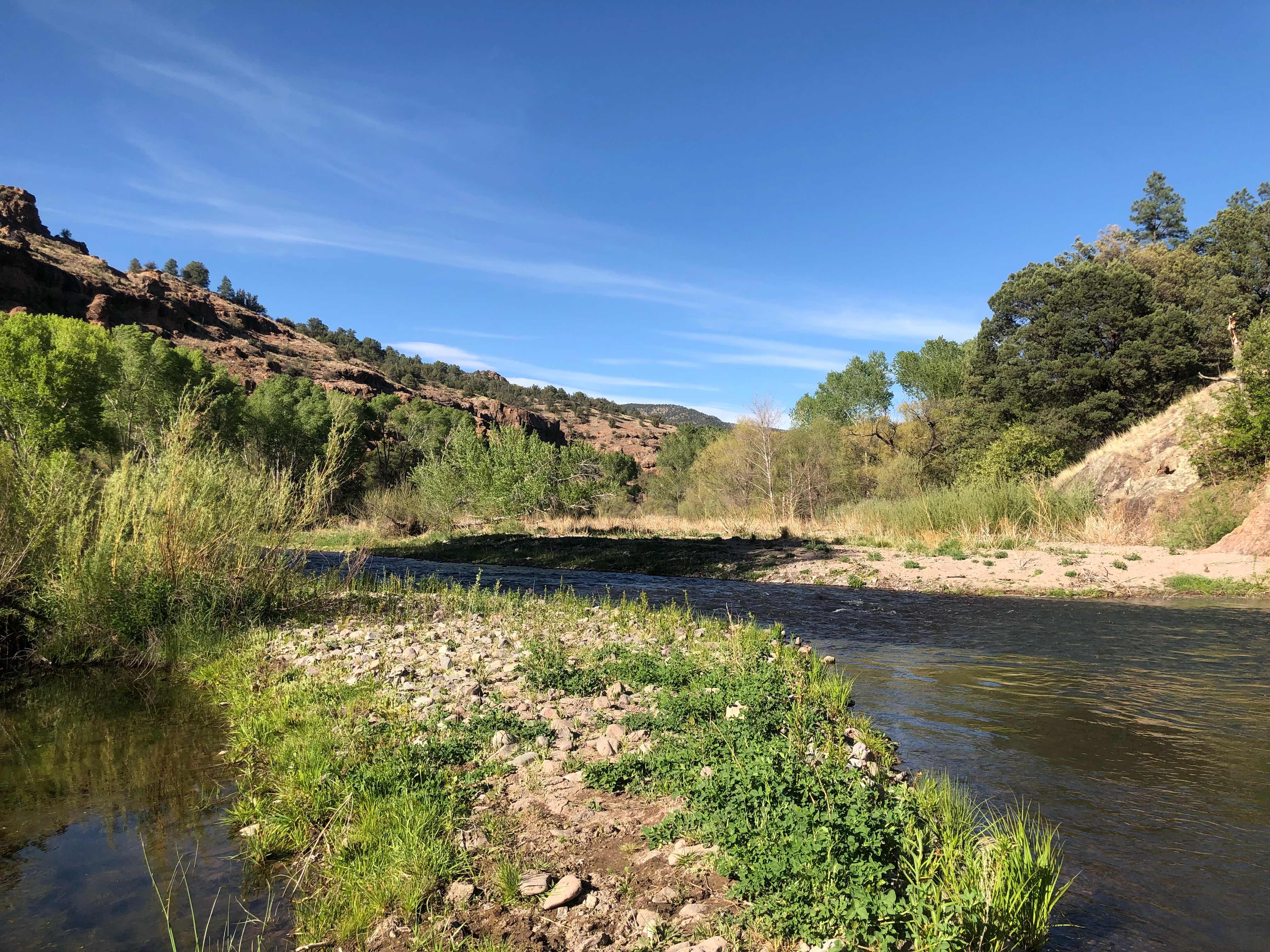 Gila River
Total miles hiked to date: 163
Sorry, but I have no data on my elevation change. Best estimate is around 4,000 ft gained and about 4,700 ft lost. Apparently whenever I take an alternate route Guthook doesn’t let me know the elevation profile.
The plan for today was to tale it easy so my ankle/foot could have a chance to heal. Well sometimes the trail provides, but today it did not. For most of the hike I was in Struggle City, population 1. Luckily, my ankle behaved for most of the day. The trail just decided to try and out do the Appalachian Trail I terms of steep climbs and long downs. My legs are not quite up to the task yet. The morning started out ok. It was cold last night and early this morning. That caused me to leave camp about twenty minutes later than normal. Then I had to stop on my way out for water. I was expecting a 16 mile dry stretch so I carried two liters out of camp. I was dumbfounded to find water almost every four miles today. I guess the silver lining was that I didn’t have to stop for any until much later in the day. Just before hitting a proper trail I passed my an old mining operation of some kind. Sites such as these are really common where I live. 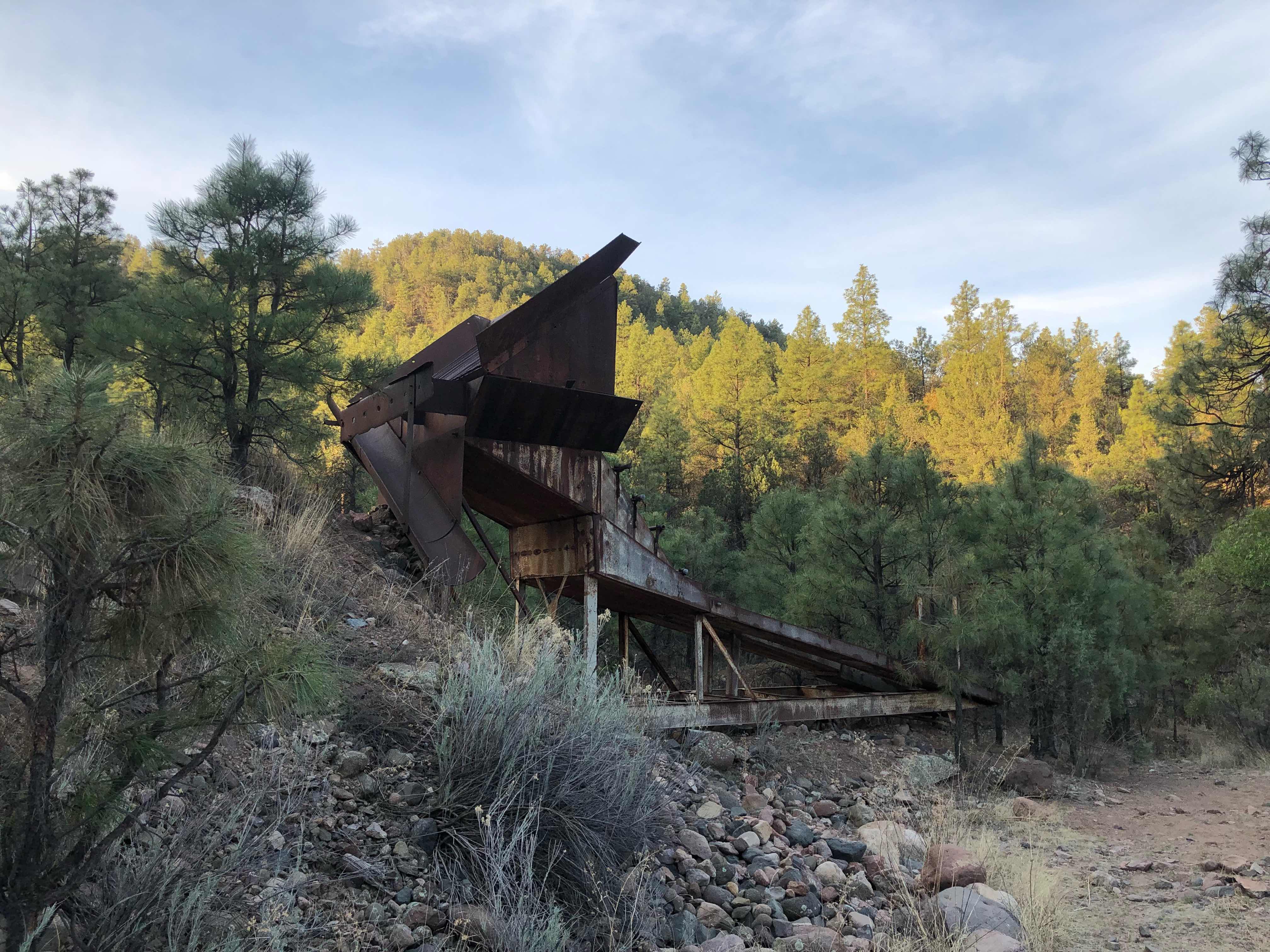 Perhaps a silver mine
My ankle began to ache after only a few easy miles. I was really beginning to think that I was in trouble. I had visions of only making it 10 miles and being in agony the entire hike. That was right about the time the trail started to climb. For some reason my ankle doesn’t hurt at all when I’m climbing. That leads me to believe that I have a problem with my hamstring and/or calf. I had 3 distinct climbs to tackle today. Each was harder than the one before. One of the reasons I enjoy thruhiking so much is for the physical challenge. Well today I got my money’s worth. 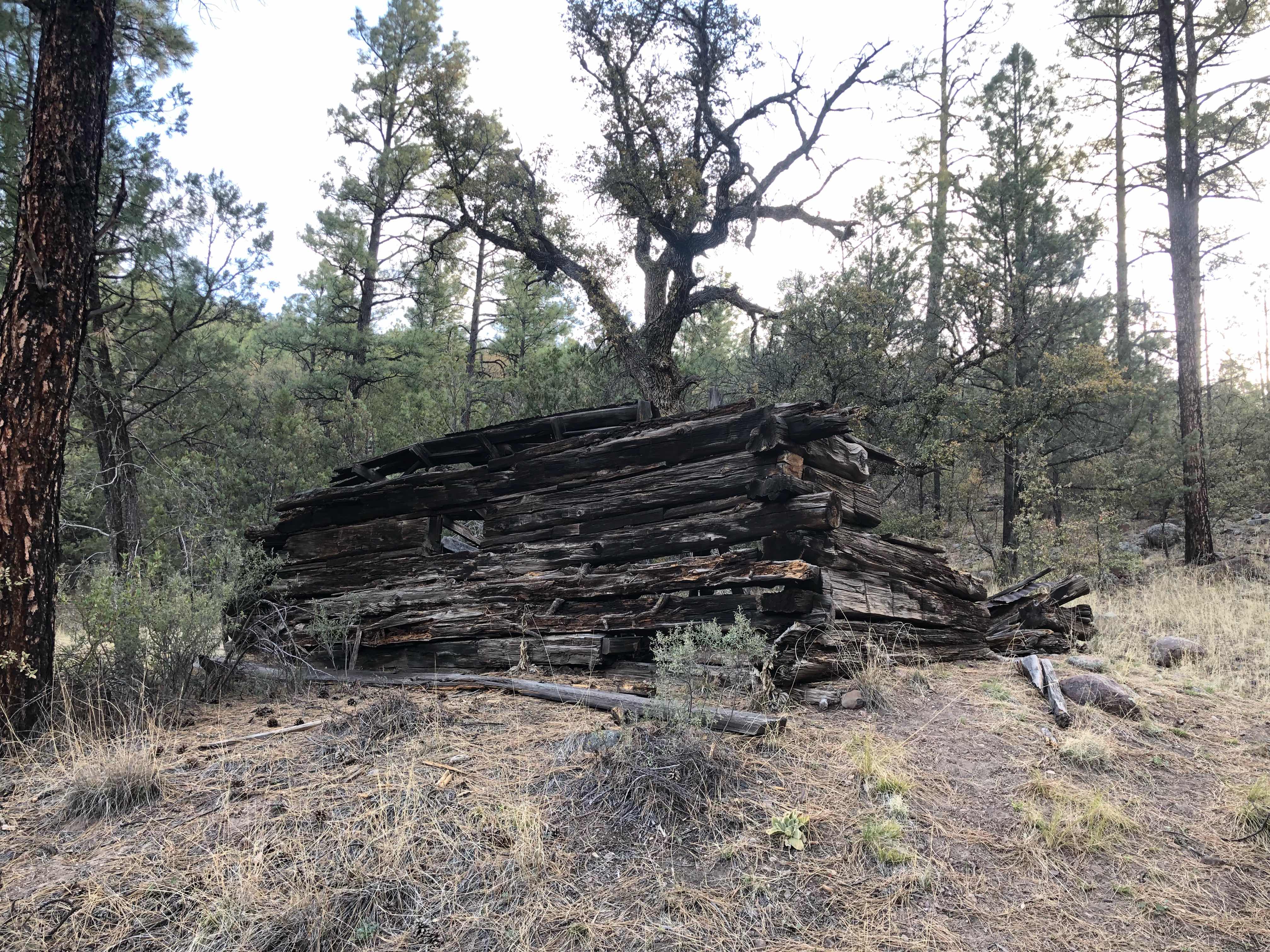 Old house I’m thinking about buying lol
The first climb was up a combination dirt road/very old undefined trail. Every time I got into a rhythm I had to stop and check my map to see if I was going the right way. Whenever you have to stop in the middle of a climb you lose all momentum. I gained close to a 1,000 feet over two miles. I was rewarded at the top with a nice view and more importantly, cell phone reception. I took a break to get my blog posted from yesterday and to stretch. I’ve been doing this long enough to realize that what goes up must come down. So far any loss of elevation really really hurts. Today was better than yesterday, but not by much. However, the force was with me and the trail didn’t descend too far. 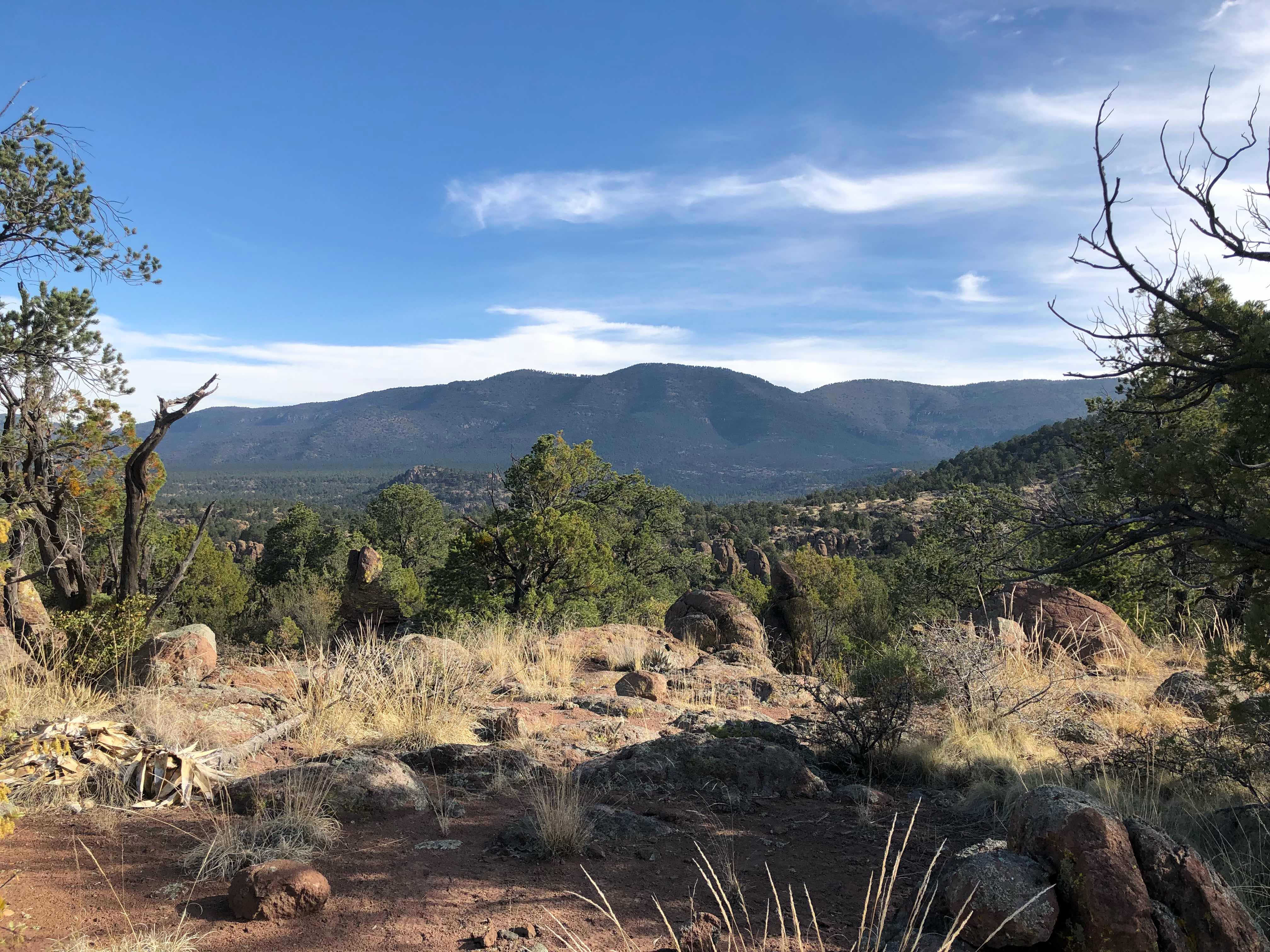 Nice view at the top
The next climb was a lot steeper and longer. By my calculations I gained 1,700 ft of elevation over 2.5 miles. This one was straight up, but very well marked. A lot of this portion was really reminiscent of the AT. I never had a climb like this on the Pct. There were sections that definitely were not graded for pack animals. My pace was very much affected. I was only averaging 2 mph and had to take frequent breaks. I hope I have more days like this. I needed all of the training I can get before Colorado. Once I reached the top I walked at tree line for awhile. The trail was almost over marked by cairns, very un-cdt like. 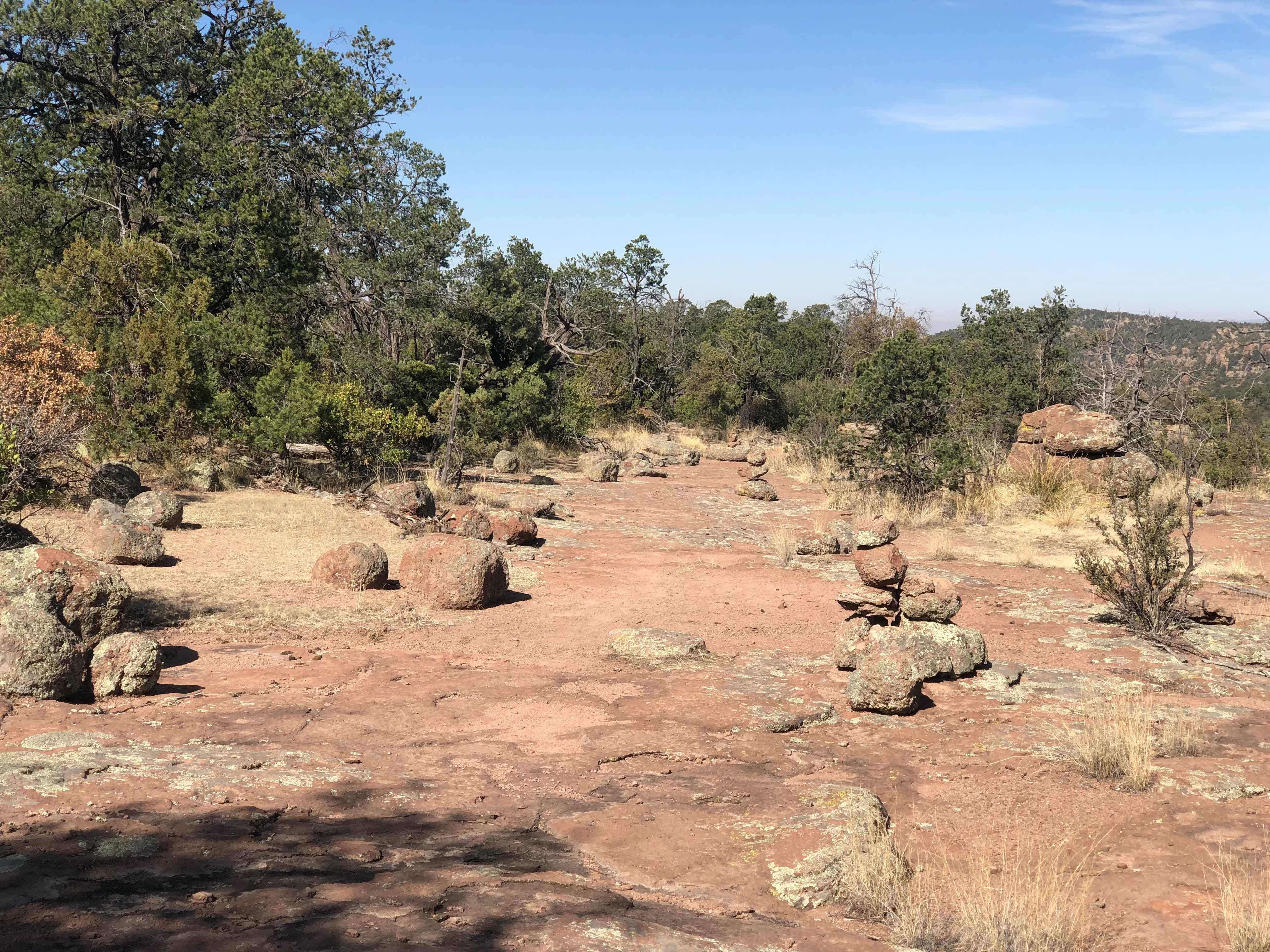 Cairns as far as the eye can see
There was also a trail register at the top. I was able to see how far ahead some of the people I know are. Baskets and Constantine are at least two days ahead of me. We started on the same day and road to the monument together. I was hoping I was getting closer to them, but they seem to really be pulling ahead. Mike P, who I met on day 4, is 3 days ahead. I really hope he can pull of a continuous year triple crown. I haven’t seen another hiker in 3 days now. Out of my original group that I started with, 3 people are ahead of me and everyone else is at least 1 day behind. I seem to be in my own little bubble. I was hoping to not be in a crowd on this hike, but I never really believed I wouldn’t have anyone else around. 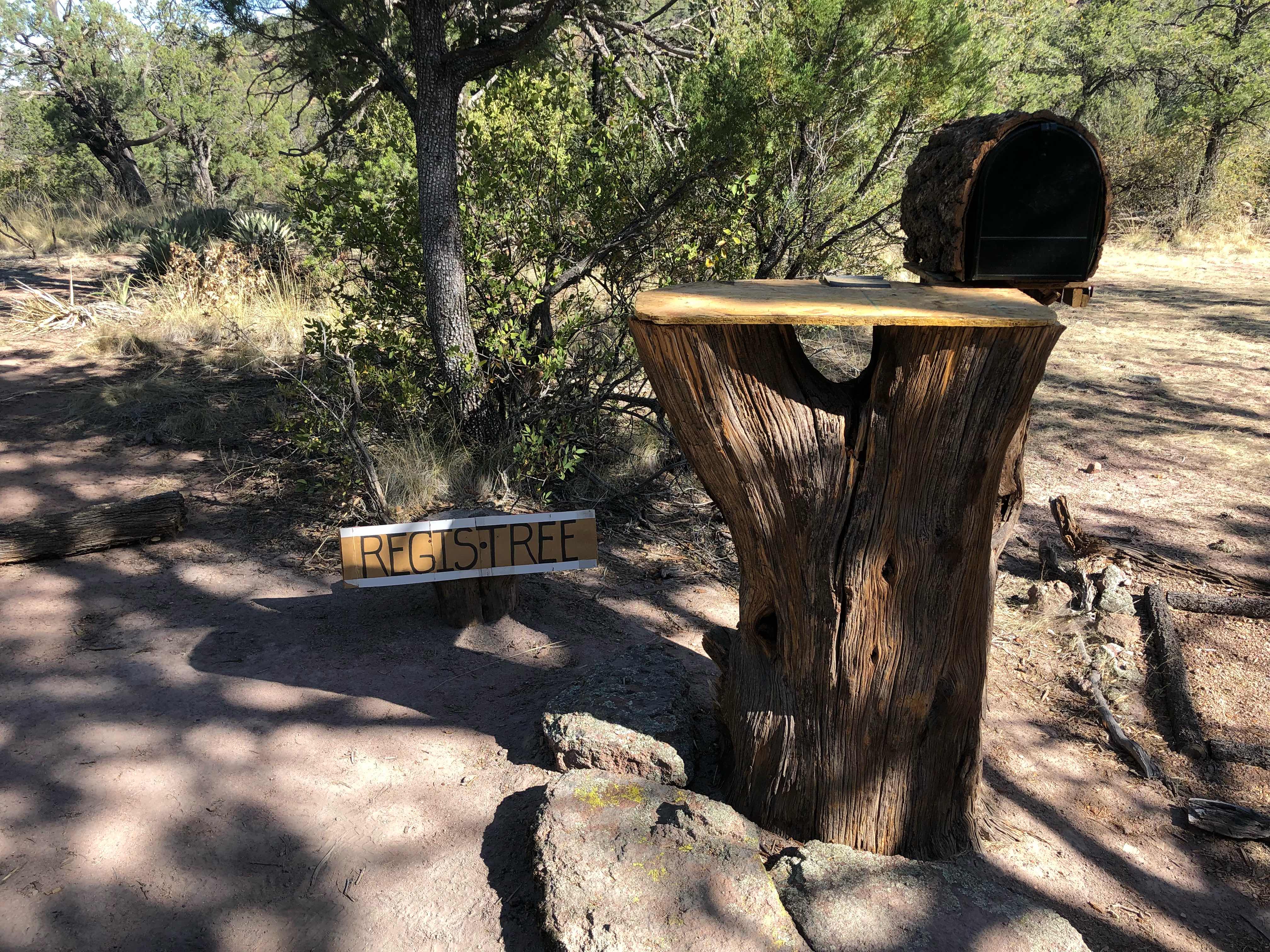 The regis-tree. The log was in an actual mailbox. So cool
I got a small reprieve from going uphill as the trail followed the contours of the mountain for several more miles. Most of this section was through a pine forest. Once again it was reminiscent of the AT. 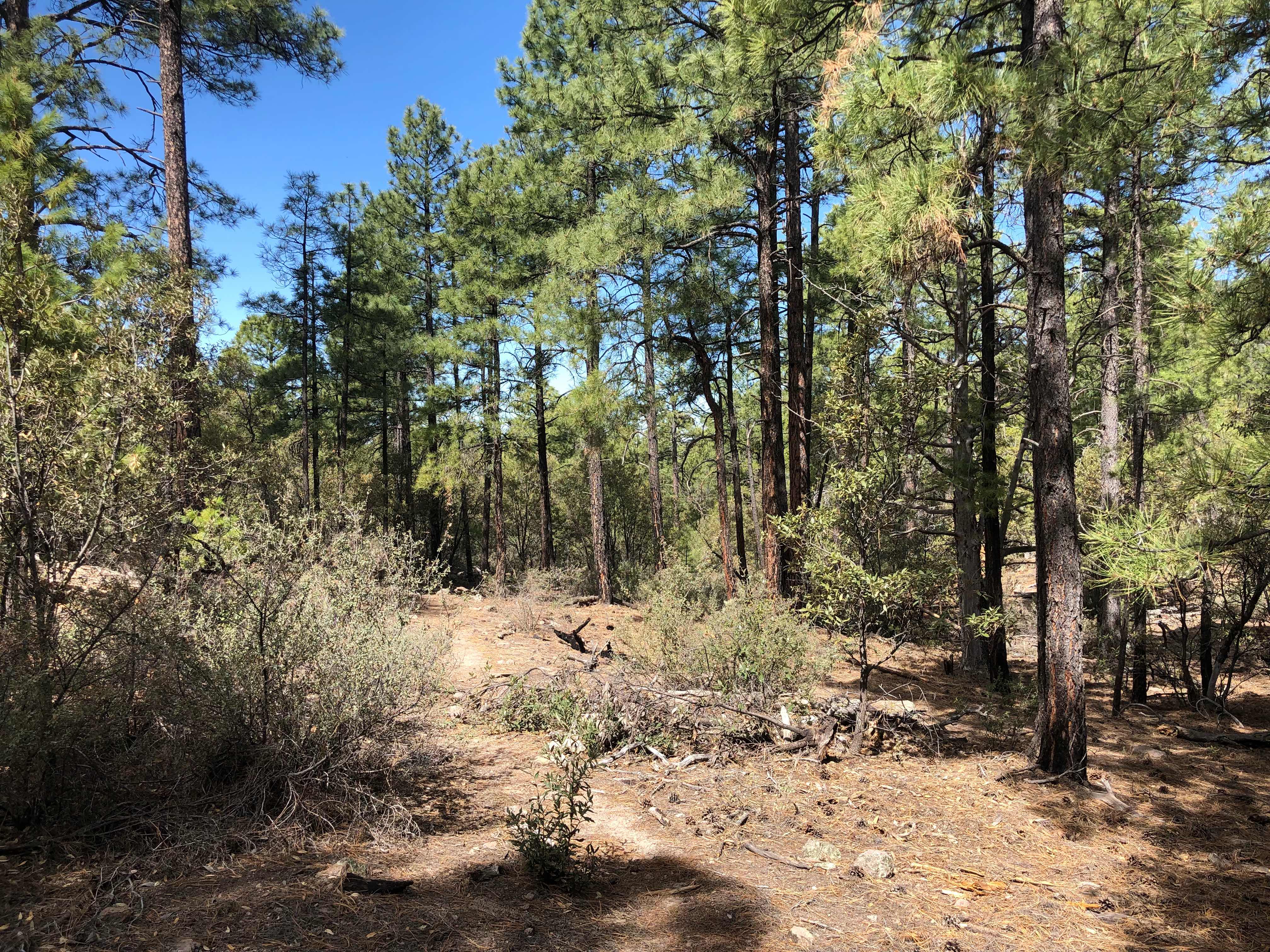 Pine trees
Now the fun part of the day began. By this time I was completely exhausted, but my spirits were still high. I had to cross over one more canyon before dropping down to the Gila River. This last bit was a bitch. It wasn’t particularly steep, but is was completely overgrown. Imagine climbing up the stairs in your house, except the stairway is full of stabby branches. This was my life for over an hour. I had to fight for every uphill step. Plus it was very exposed. The sun was really beating down on me. Whenever I have a difficult climb I listen to music to help see me through. When I’m particularly miserable I like to listen to Les Miserables. Don’t ask me why? I guess I find it uplifting. 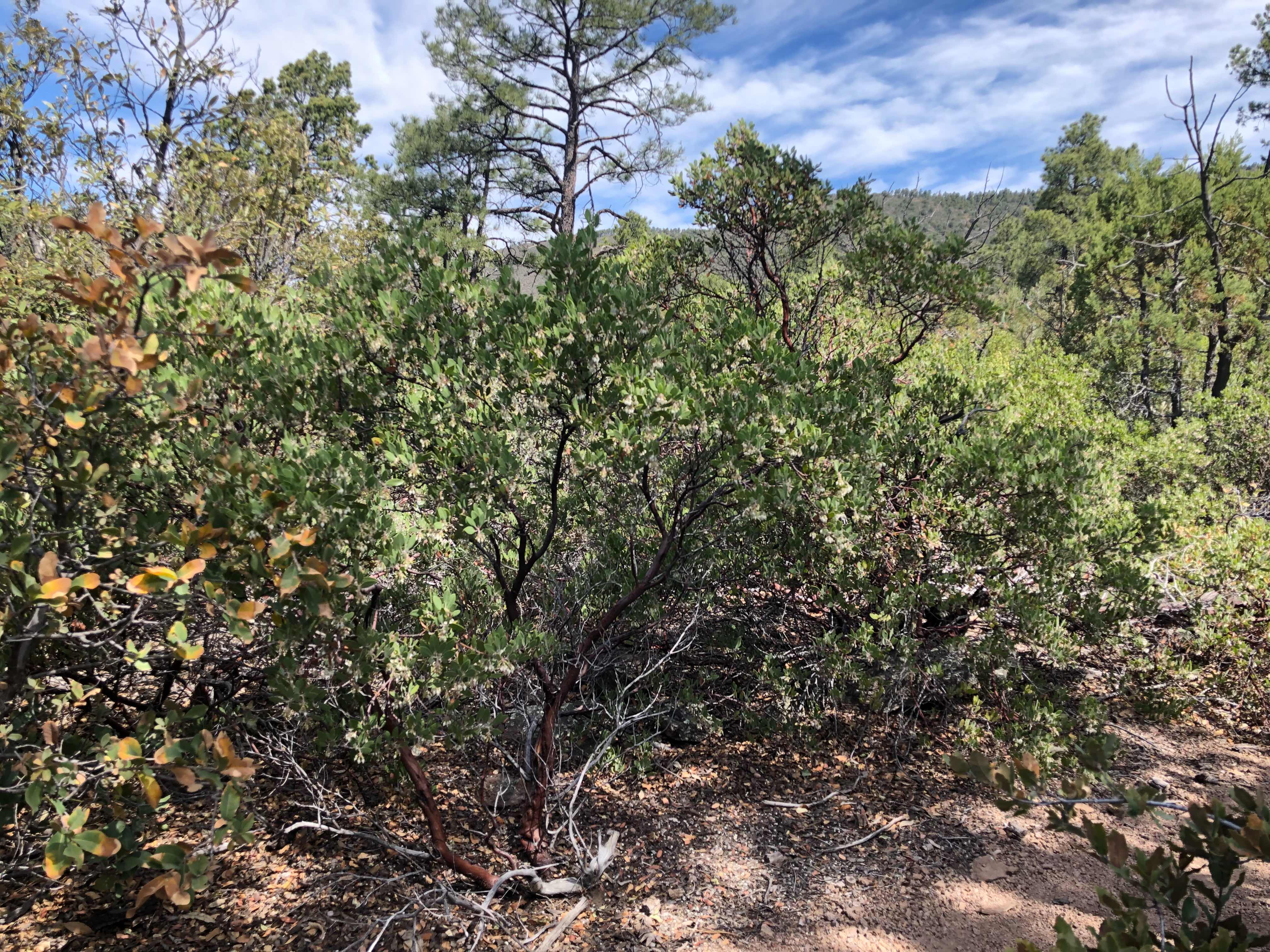 Trail through Manzanita
At first I became very excited to see manzanita on this trail. I have very many fond memories of it on the Pct. Casa da Luna had an entire camping area comprised of manzanita. I became distinctly less enthusiastic when inhad to hike trough it going uphill. Once I cleared this area my legs were pretty torn up and Les Miserables was over. I put my music on shuffle and pressed on. I knew that I had to drop down over 2,500 ft before I reached the Gila River. What I didn’t realize that it would be down a steep and rocky dirt Jeep road. Up until this point I had completely forgotten that my ankle was hurt. I was quickly reminded. The next 4 miles was difficult, slow, and excruciating. 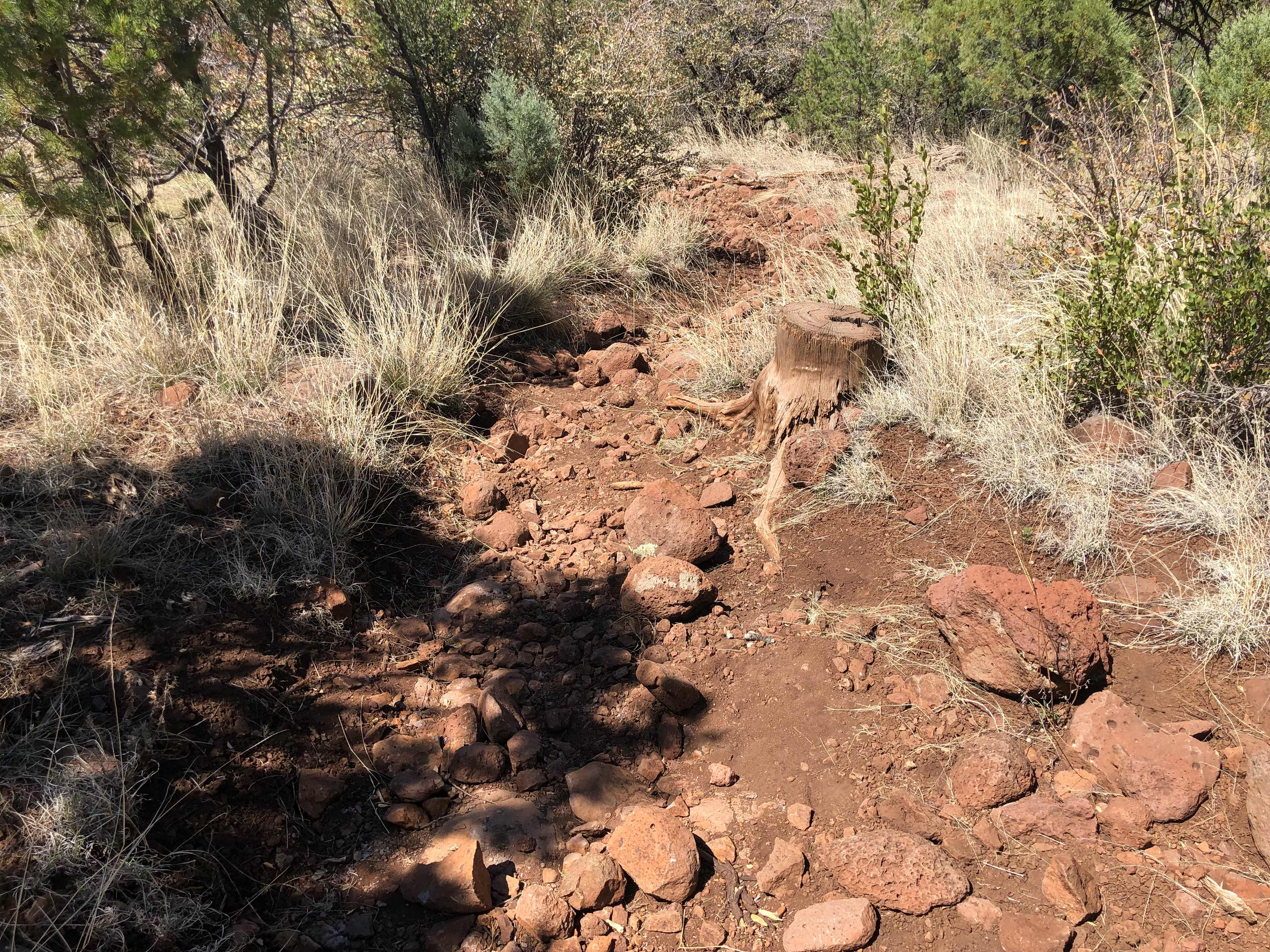 Four long miles of this
To be far, my ankle did much better today than yesterday. I think all of the uphill today helped to stretch out my calf and hamstrings. Whenever I took a break I did some more stretches and that seemed to temporarily solve the problem. By the time I got to the bottom of the canyon I was in desperate need of water and a break. Lucky for me I finally hit the Gila River. I will spend the next 60ish miles hiking along it. I cross the river over 85 times. Today I didn’t want to get my shoes wet so late in the day, so I put on my Luna sandals and hiked in those until I made camp. The ice cold water did miracles for my ankle. 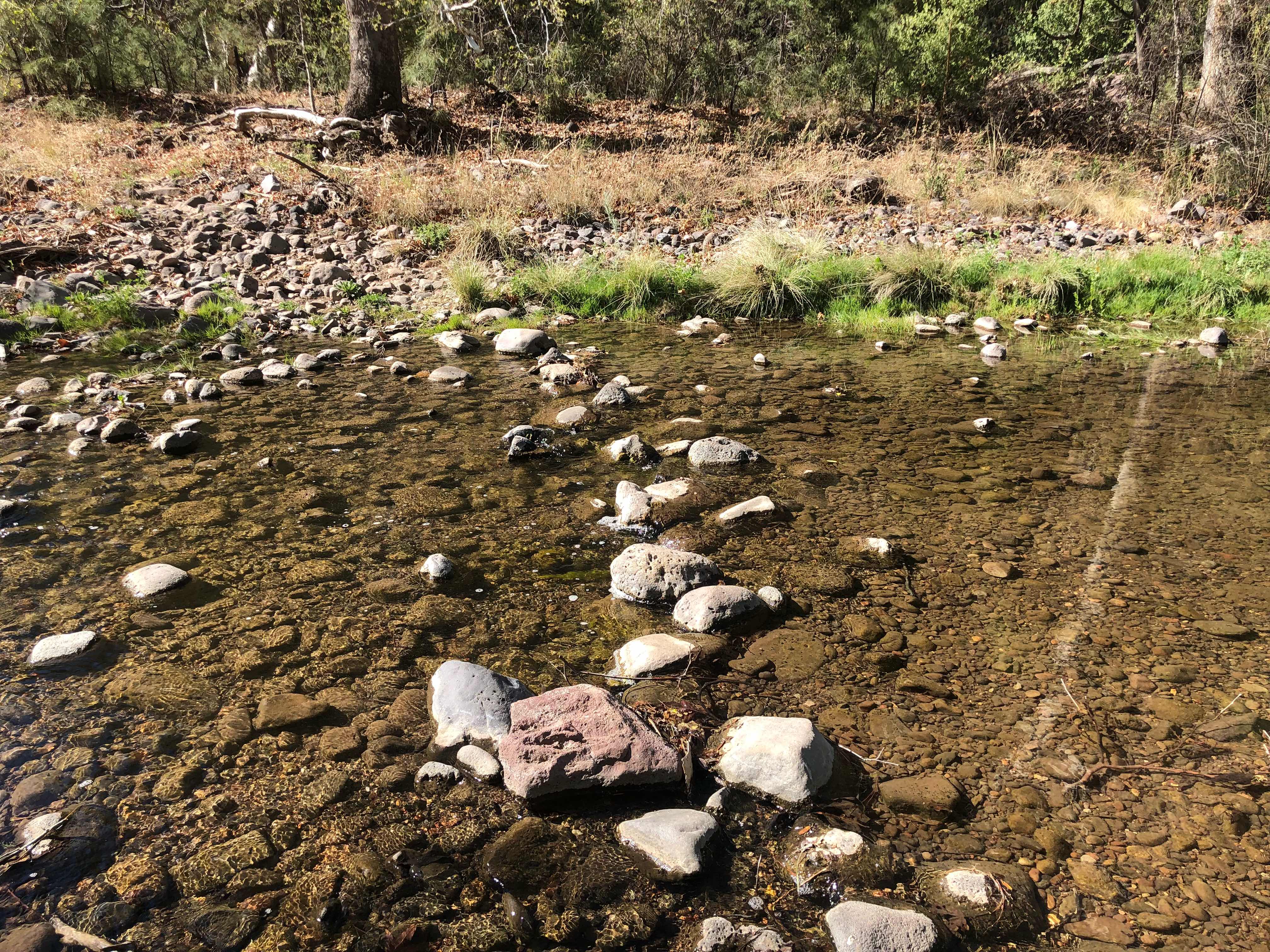 Started of with a nice easy dry crossing 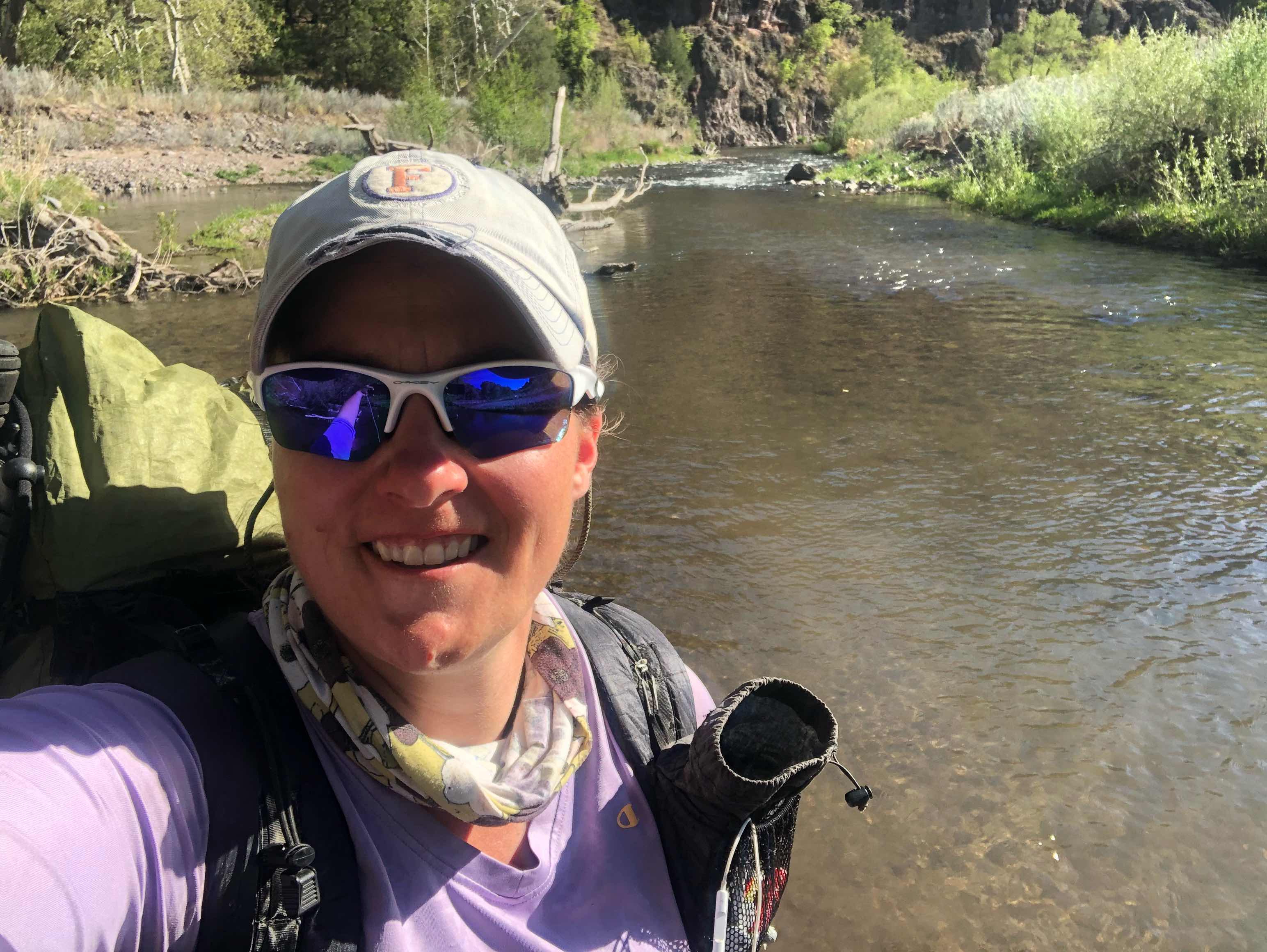 Too wide for a dry crossing. I just went for it and walked upstream for awhile 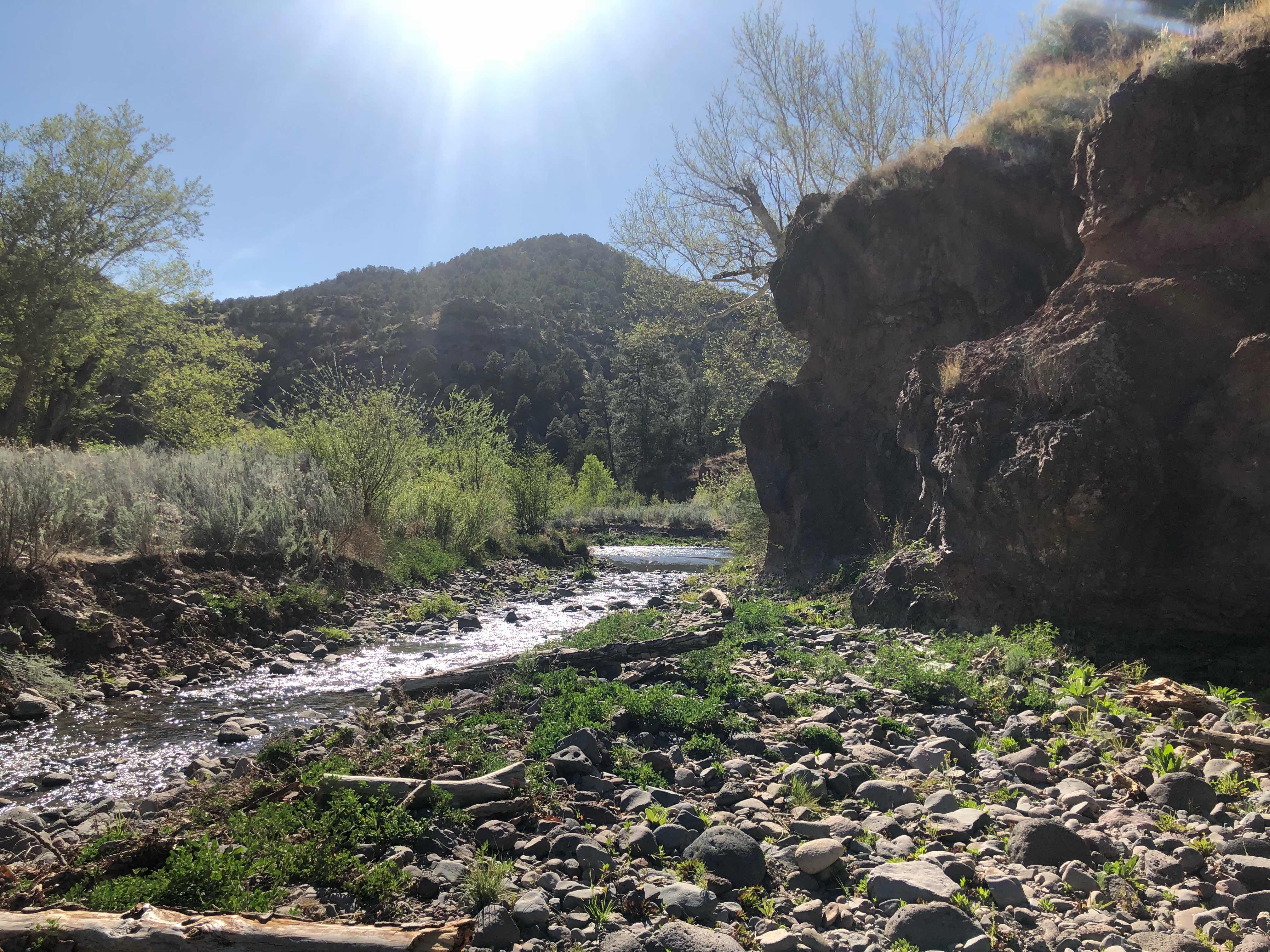 This area is going to be beautiful(and slow going)
I spent awhile trying to find an acceptable place to camp. Most places on the banks were marshy or giant anthills. After bushwhacking for over a mile I finally found a descent spot. I decided to set up my tent tonight. I thought it would be really cold with a ton of mosquitoes since I was so close to the river. So far I was wrong. I haven’t seen a single mosquito and it is pretty warm still. I’m hoping it doesn’t get too cold tonight. I’m not looking forward to being cold in the morning and then having to hike in and out of the river all day. My plan is to sleep in and let it warm up. I only have 15 miles before I get to Doc Campbell’s Outpost, my next resupply point. I forgot to mention that this area is filled with natural hot springs. Who knows, maybe I’ll get in one.
“Endurance is patience concentrated.”
- Thomas Carlyle