Daily up: 1,204.4 ft/ daily down: 1,521 ft
Total up: 4071.9 ft/ total down: 4025.3 ft
When I was hiking the PCT we used to strive to hike twelve miles by twelve o’clock. I routinely hike that goal. I thought it would be awhile before I achieved that on the CDT. I was wrong. I was actually trying to hike ten by ten, but I had to stop after four miles to filter water. After my dry camp last night I was pretty thirsty this morning. I was out of camp by 6:30, fifteen minutes faster than yesterday. I’m starting to get back into the thruhiking routine. This morning was the first time I’ve had to filter water. Every other source has been a water cache provided by the CDTC. I wasn’t quite sure what to expect. I’ve heard a lot of horror stories about water on this trail. This mornings source wasn’t too bad, if you ignored the dead cow 25 yards from the water trough. 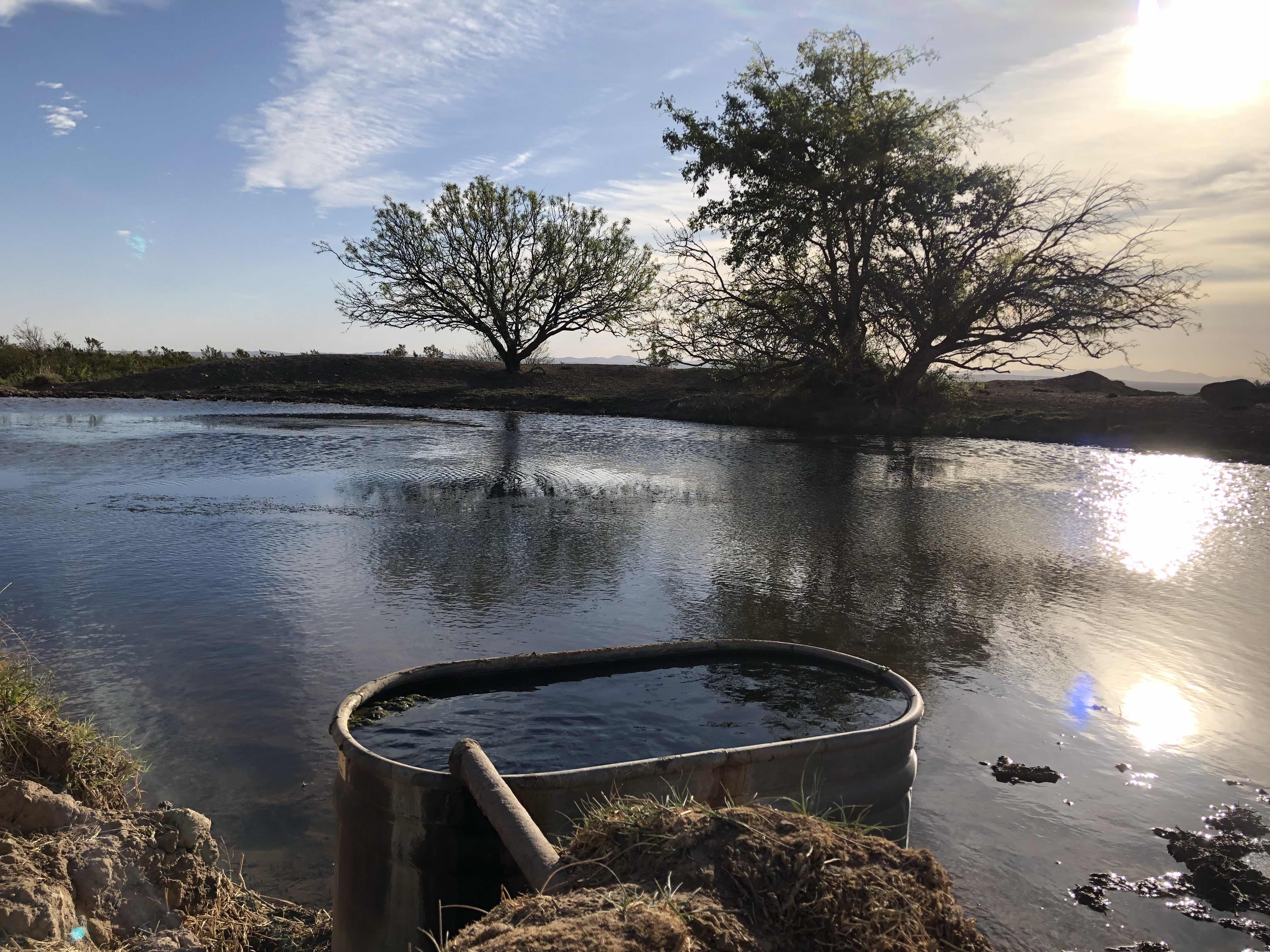 I managed to get a very idyllic picture
When I checked guthook it looked like my next source was eight miles away, so I decided to drink a liter at the source and carry two with me. After about 3 miles, I took a snack break. While I was eating I checked guthook again and saw that I missed a water cache. It was only a few more miles away. I dumped out most of the water I was carrying. There was no sense in carrying the extra weight. Today was very sunny and windy. The wind helped to keep me from getting over heated, but it was difficult to hike in. I decided that I’d rather deal with the constant wind, than with being miserably hot. I’ve done a good job applying sunscreen, but I’m starting to get pretty burnt on the backs of my hands and areas of my neck.
I really enjoyed the hike today. We finally started to see some elevation change and it really changed the tone of today’s hike. I could see farther in the distance and it was neat to see how far I have come in such a short time. Plus, I get bored without climbing up mountains(although today it was more like climbing tiny hills). 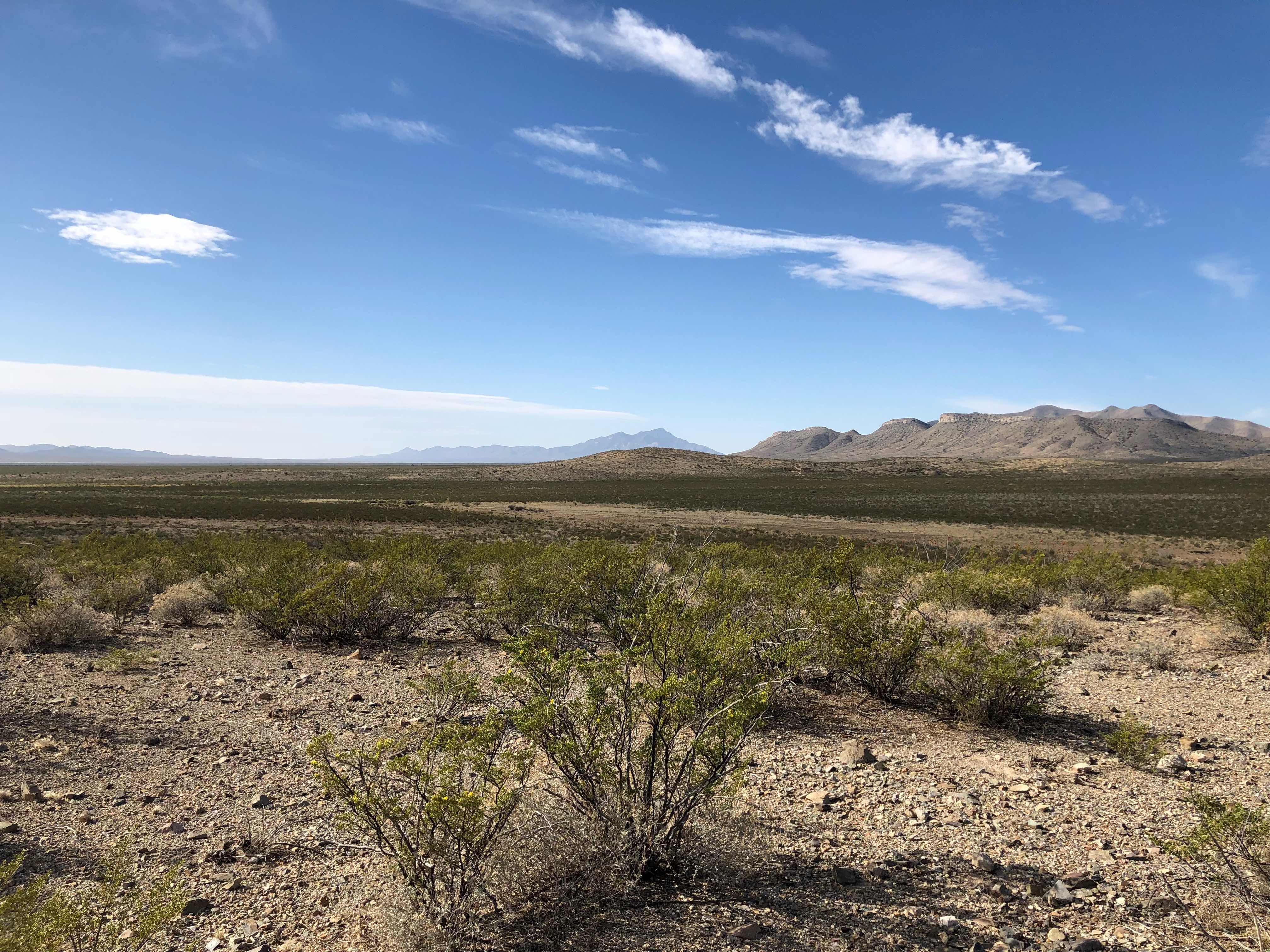 You can’t even see the place where I began, but it is close to the mountain range in the middle
Shortly after I arrived at the third water cache, Michael caught up with me. He had left camp an hour before and I somehow passed him on the trail. We talked about how our days were going and where we planned on camping. I told him that I really wanted to do at least 20 miles, but I was hoping for 22. He pointed out that if I camped at 20 or 22 I would have to dry camp again, but if I could do 23 I could camp at water. I was pretty doubtful about the prospects of hitting a 23 mile day so soon. The first day I struggled to do 14 and yesterday I thought the 20 was going to kill me.
Luckily I didn’t have to make a decision until around mile 15. That was my point of no return. Either I carried enough to dry camp or I went for the big day. The hike until then was pretty uneventful except for another dead cow that was almost completely decomposed. I also saw a jack rabbit that was completely ripped to shreds. The desert is unforgiving for not only hikers, but the wild life as well. 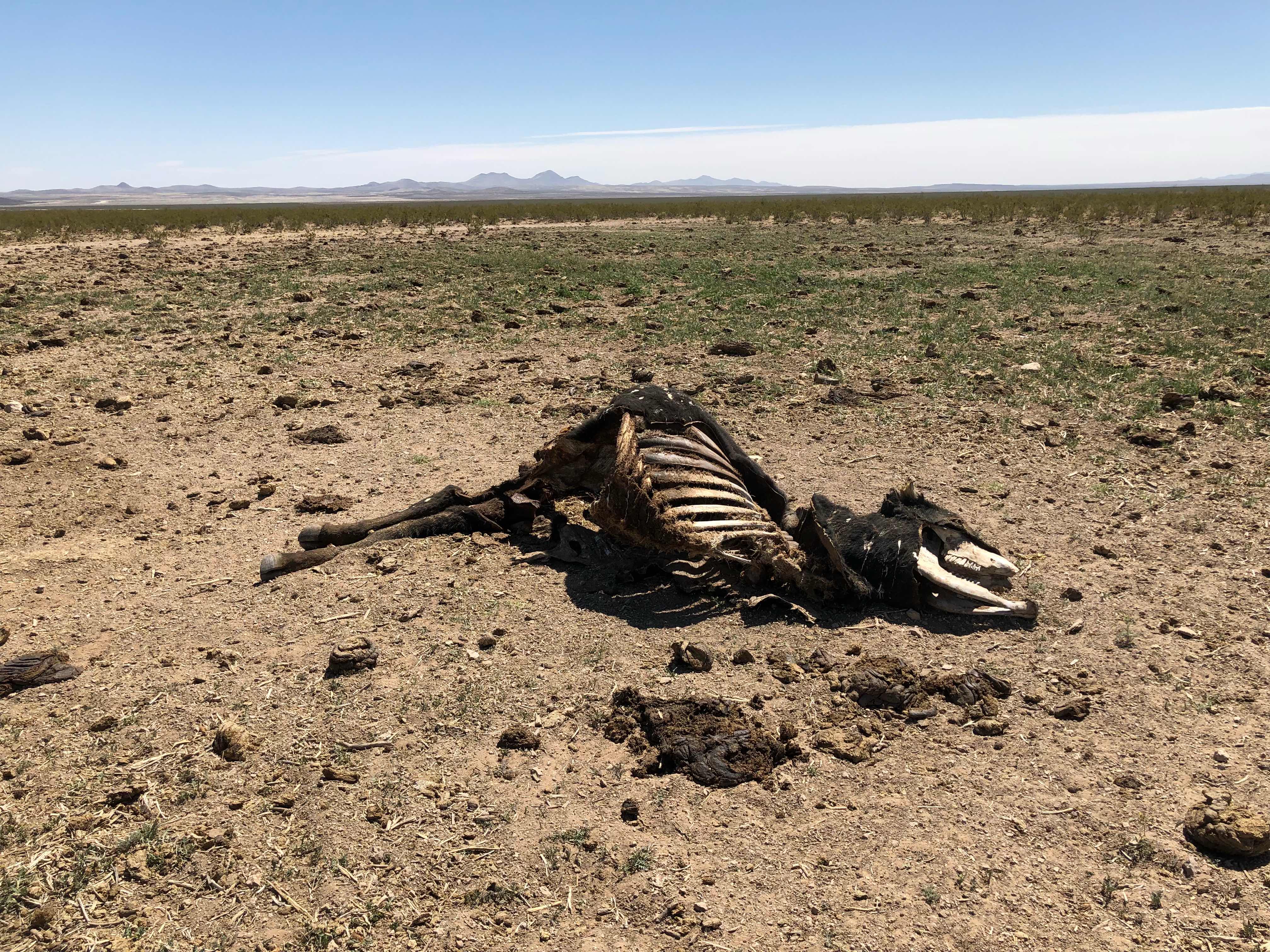 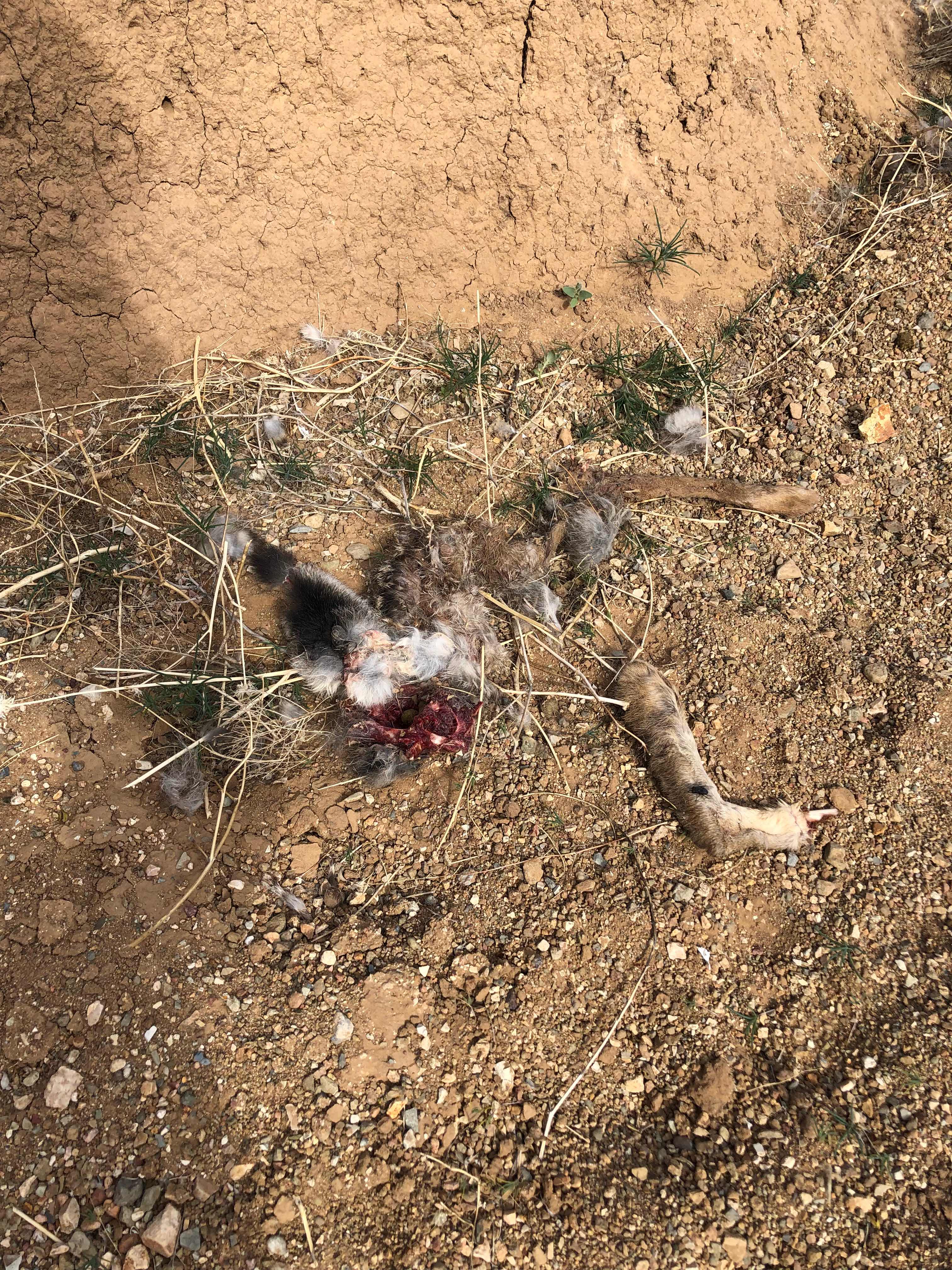 Eviserated jack rabbit
The water source at mile 50.5(15 for the day) was like a tiny oasis. There was shade, a perfect log to sit on, and the water was slightly chilly. I took a long break while I decided what to do. I really felt like I had another eight miles left in me, but then again I felt pretty good at the same time yesterday and within a few miles I completely broke down. I decided to carry enough water that if I couldn’t make it I could at least make it through the night, I would just be really thirsty again. I headed away from the oasis carrying 2.5 liters. If I really was going to dry camp I should have carried 3-3.5 liters. An hour into the remaining miles I felt great. I hiked 3.3 mph, which is very fast for me. I contribute that to hiking to music instead of a book. Thanks to my wonderful brother, Anthony, I have Apple Music and I was able to download a bunch of new music for free before I started the trail. With only 5 more miles to go and feeling pumped up, I decided to lighten my load and I dumped out almost a liter of water. 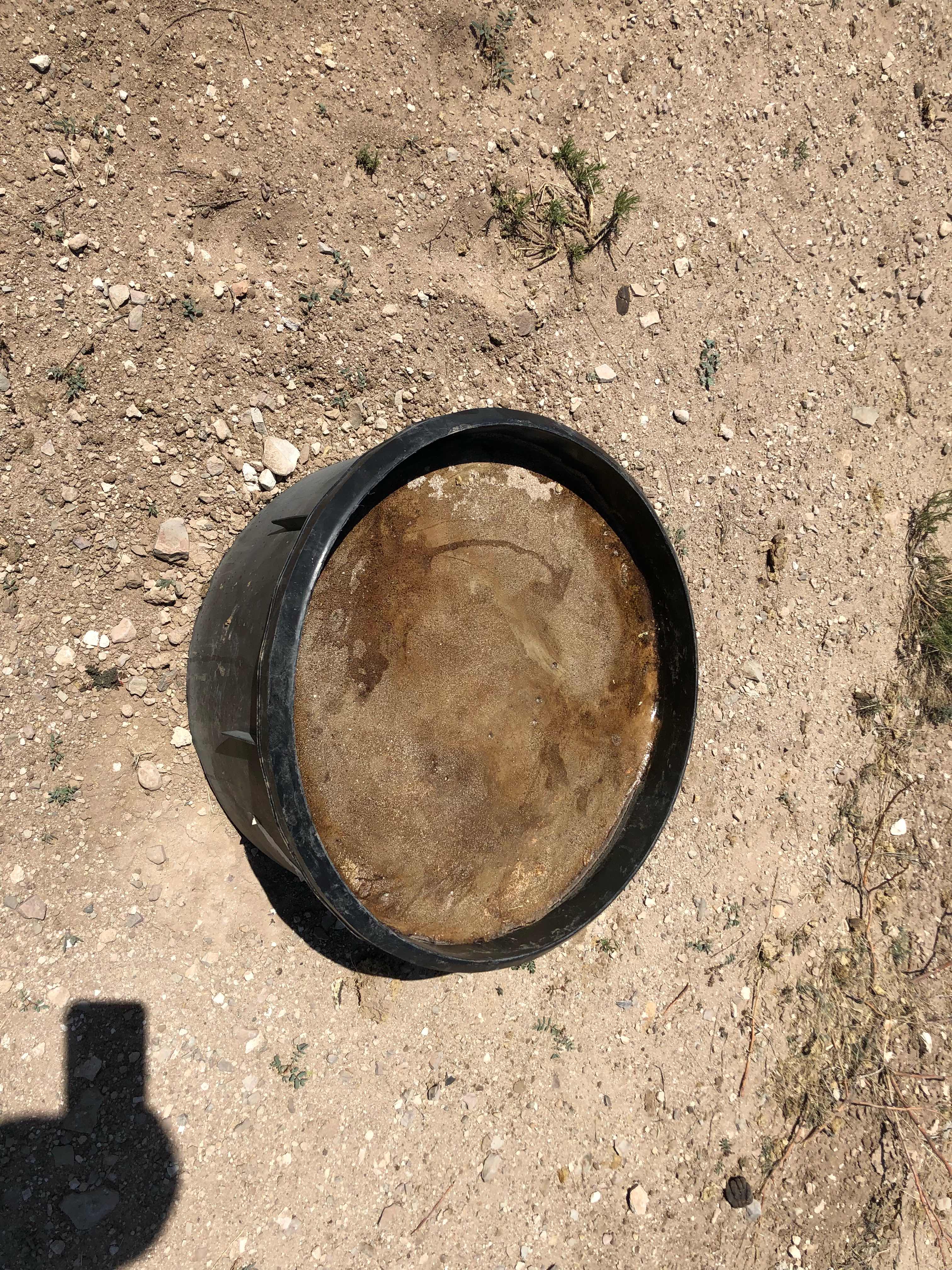 Super nasty water that I would never consider drinking 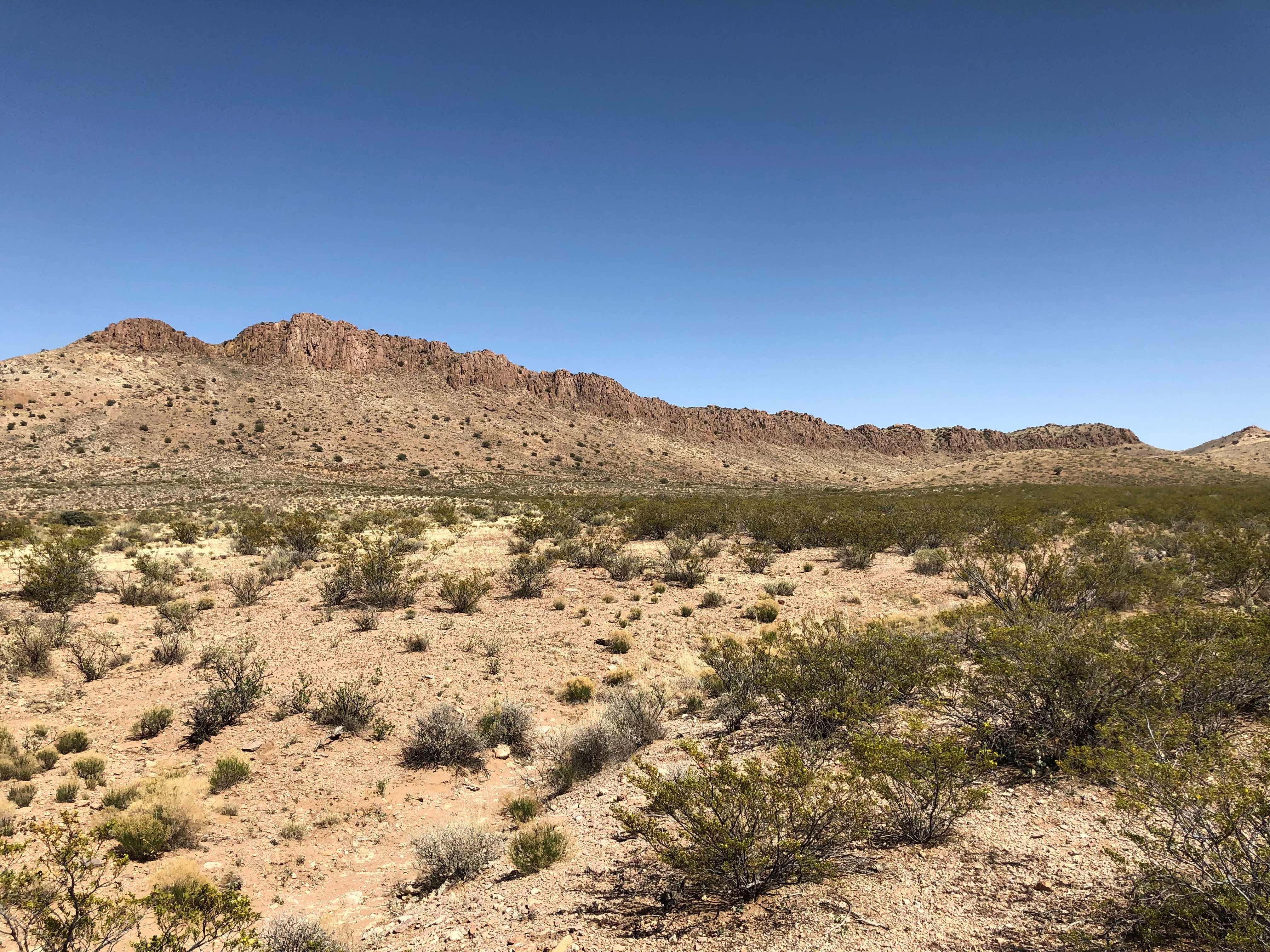 Beautiful scenery
I was really flying along the trail and the sun and wind were beginning to take there toll. I passed by a huge tree with a ton of shade, so I decided to take another break. When I checked my mileage I saw that I only had 2.3 miles left before I hit the water cache. At that point I ditched all but half a liter. 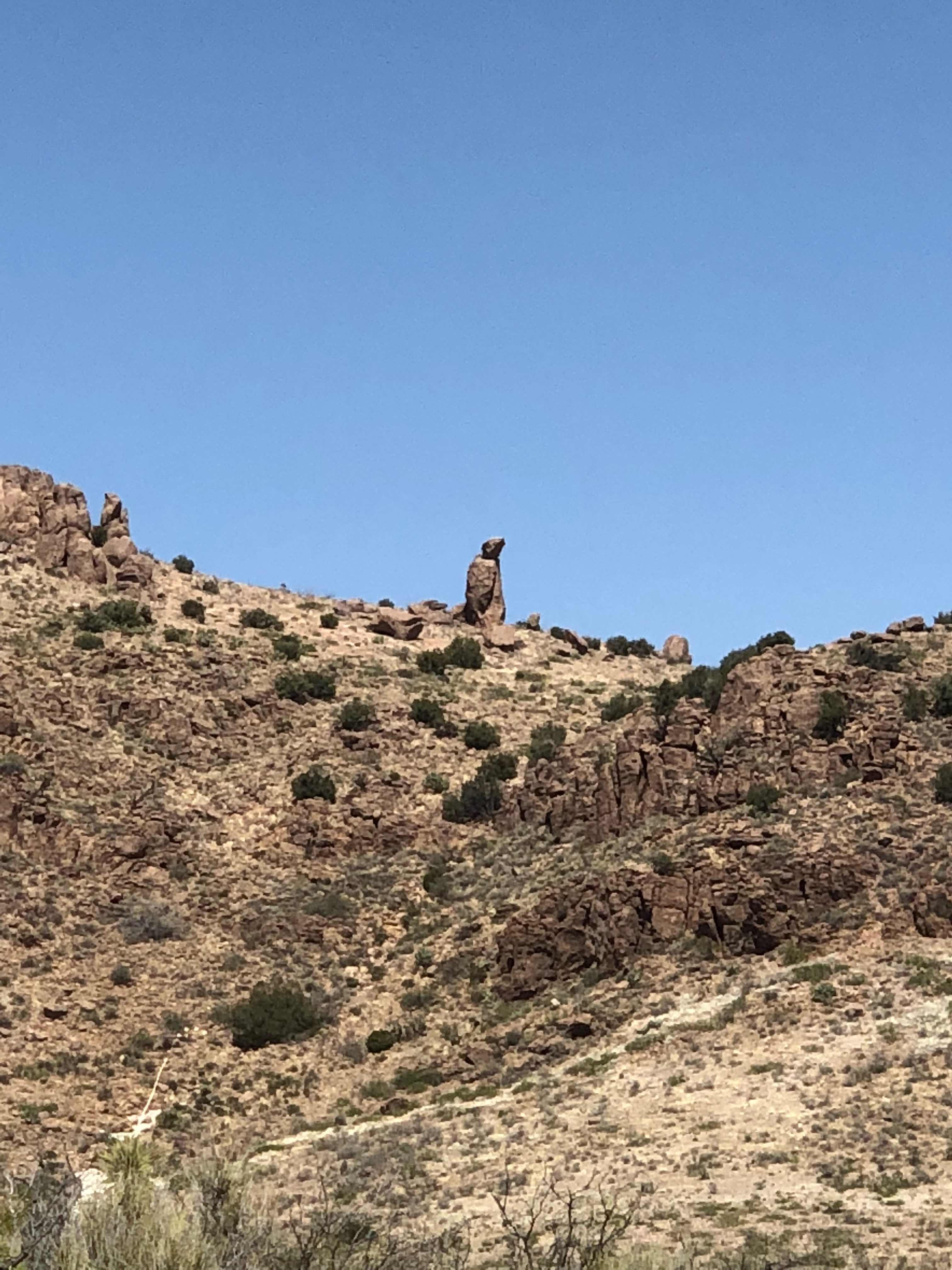 The PCT has an Eagle Rock, I’m calling this Pelican Point
Just before I hit the water cache I hit two barb wire fences. Usually there is a gate or still to get through, but these just had a section of wire removed. I had to remove my pack and slither through without tearing myself up. It was pretty annoying and it slowed me down. My legs were really starting to tighten up and I was not amused. 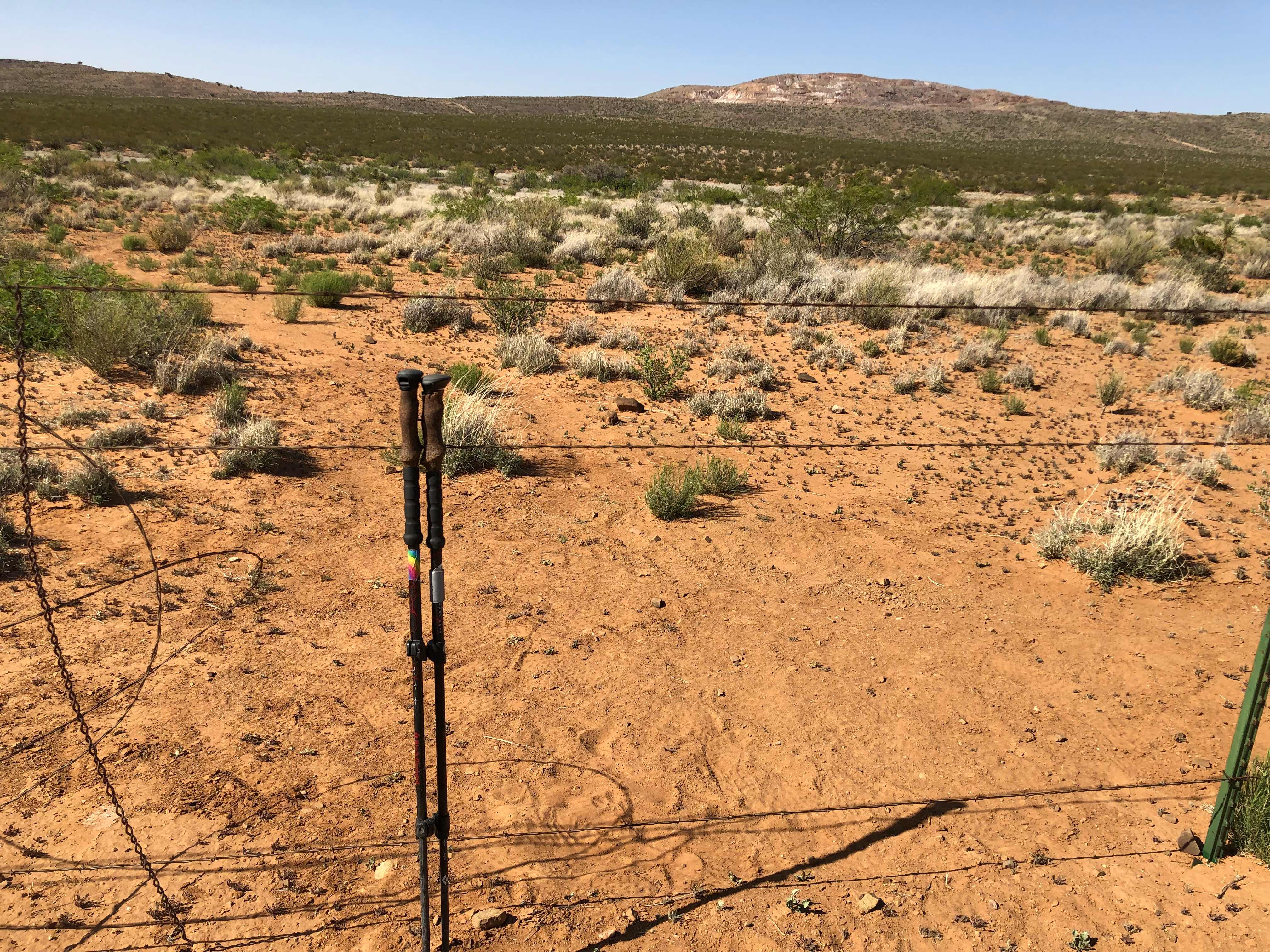 This one I probably could have kept my pack on, but there was no way I was risking putting a tear in a brand new $400 pack
I was thrilled to finally hit the water cache, but also disappointed. There was absolutely nowhere to camp that was out of the wind. I ended up setting up next to a high agave plant that is sort of acting as a wind break. Everyone else around me(no of them I know because they started the day before me) is setting up tents. I enjoy cowboy camping even in the wind. I would rather eat dirt in my sleep than listen to my tent flap around all night. 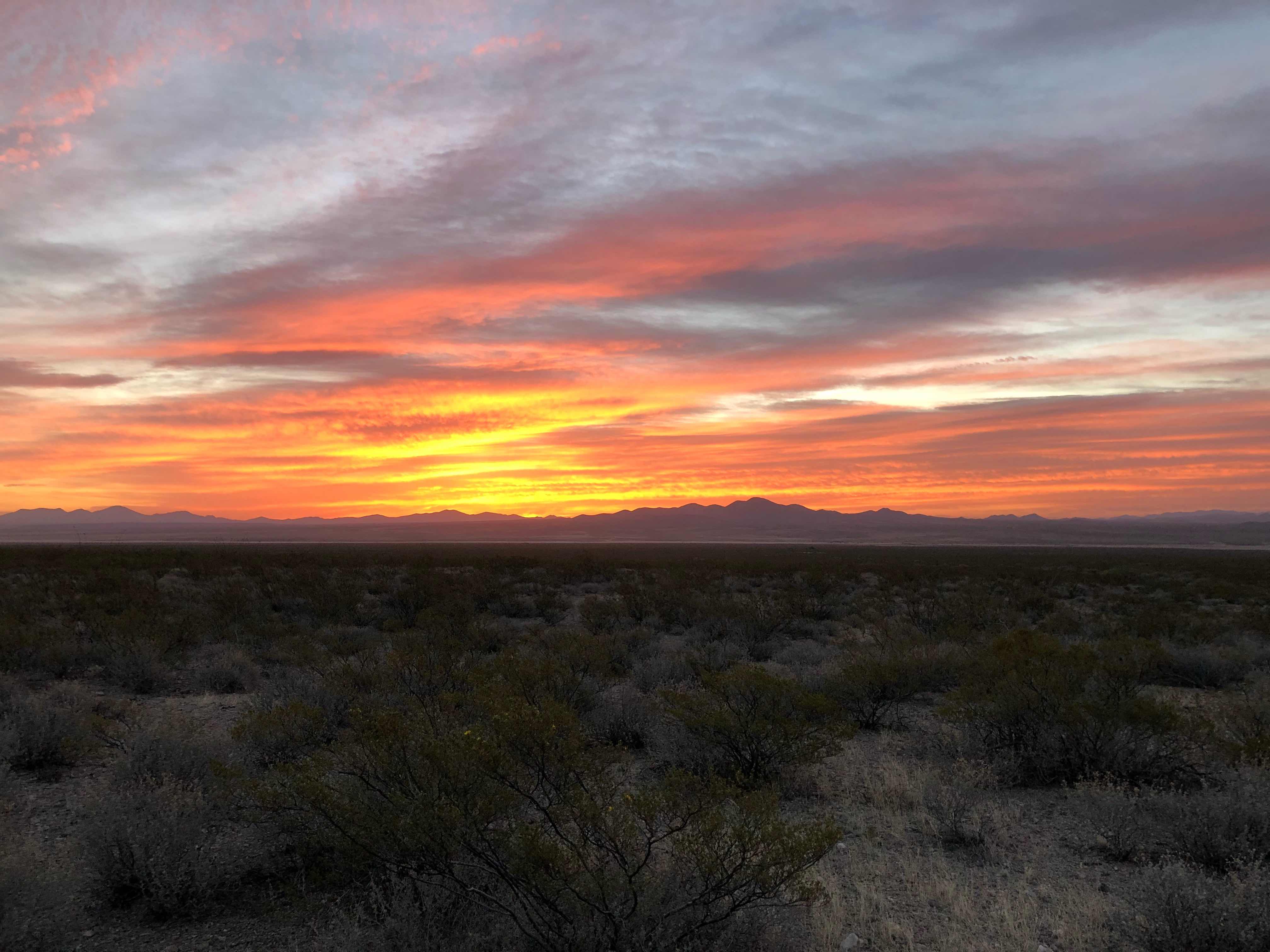 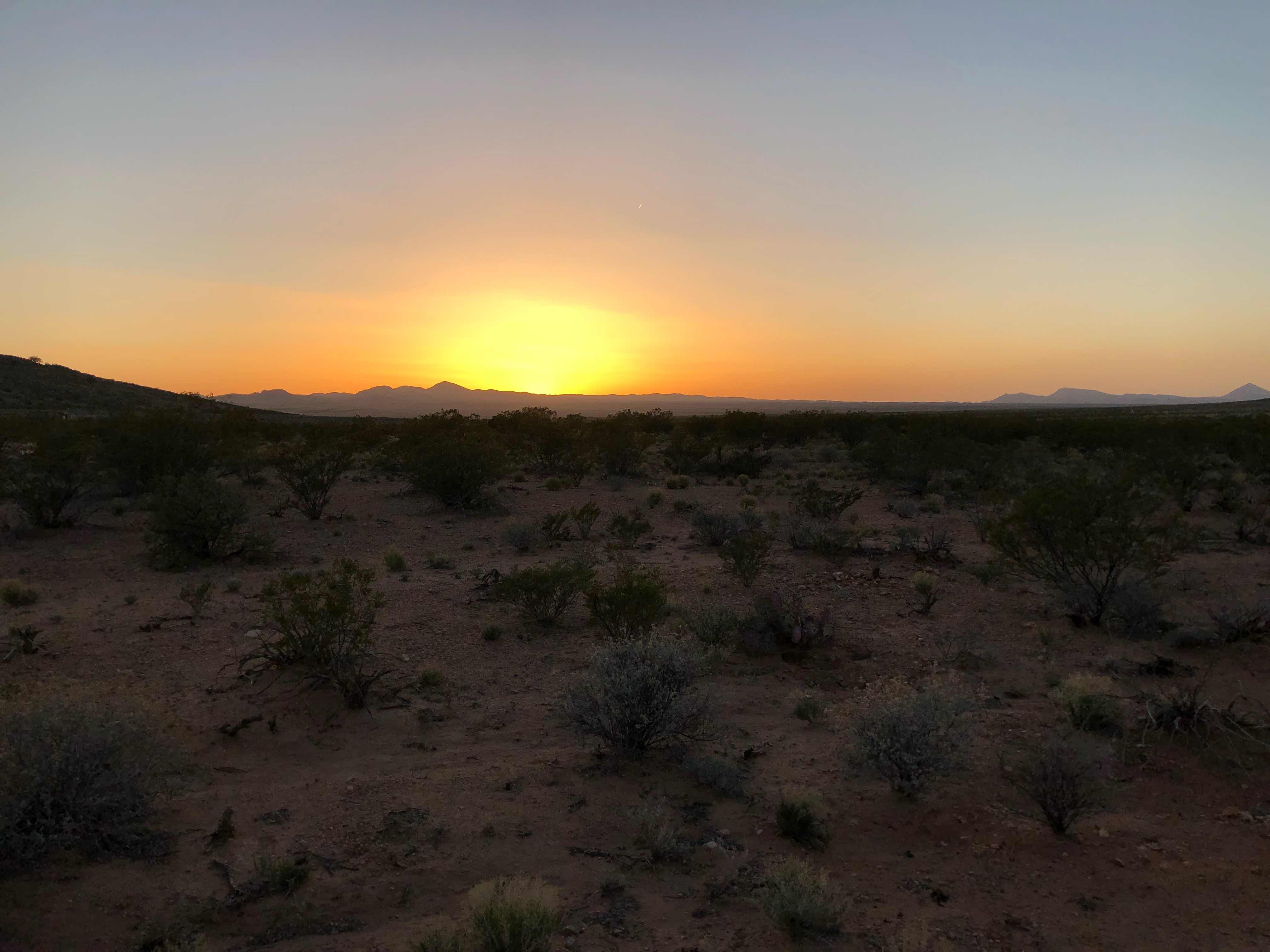 Sunset tonight
“Happiness cannot be traveled to, owned, earned, worn or consumed. Happiness is the spiritual experience of living every minute with love, grace, and gratitude.” - Denis Waitley