Day 7- I Put My Climbing Britches On

Daily up/down: +3,449.1 ft/ -3,100.7ft
Total up/down: +11,475.8ft/ -9,459.7 ft
I knew it was going to be cold last night so I prepared for it by setting up my tent, wearing my puffy jacket with my rain coat over it, and I put on my fleece buff. I stayed warm, but just barely. My strategy this morning was to sleep in a little and wait for the sun to come up before leaving camp. Once the sun was up it warmed up quickly. I started off hiking in my puffy, but was able to take it off within a couple of miles. When I was hiking the AT and PCT I would always check out the elevation profile for the day before starting out of camp. I haven’t been doing that so far on this trail. Everyday has been very flat. I had two main priorities for the first half of my day: get water and put on my hiking shorts at some point. I figured today would be a good day to introduce my pale winterized legs to some sun. I would be in and out of tree cover all day. 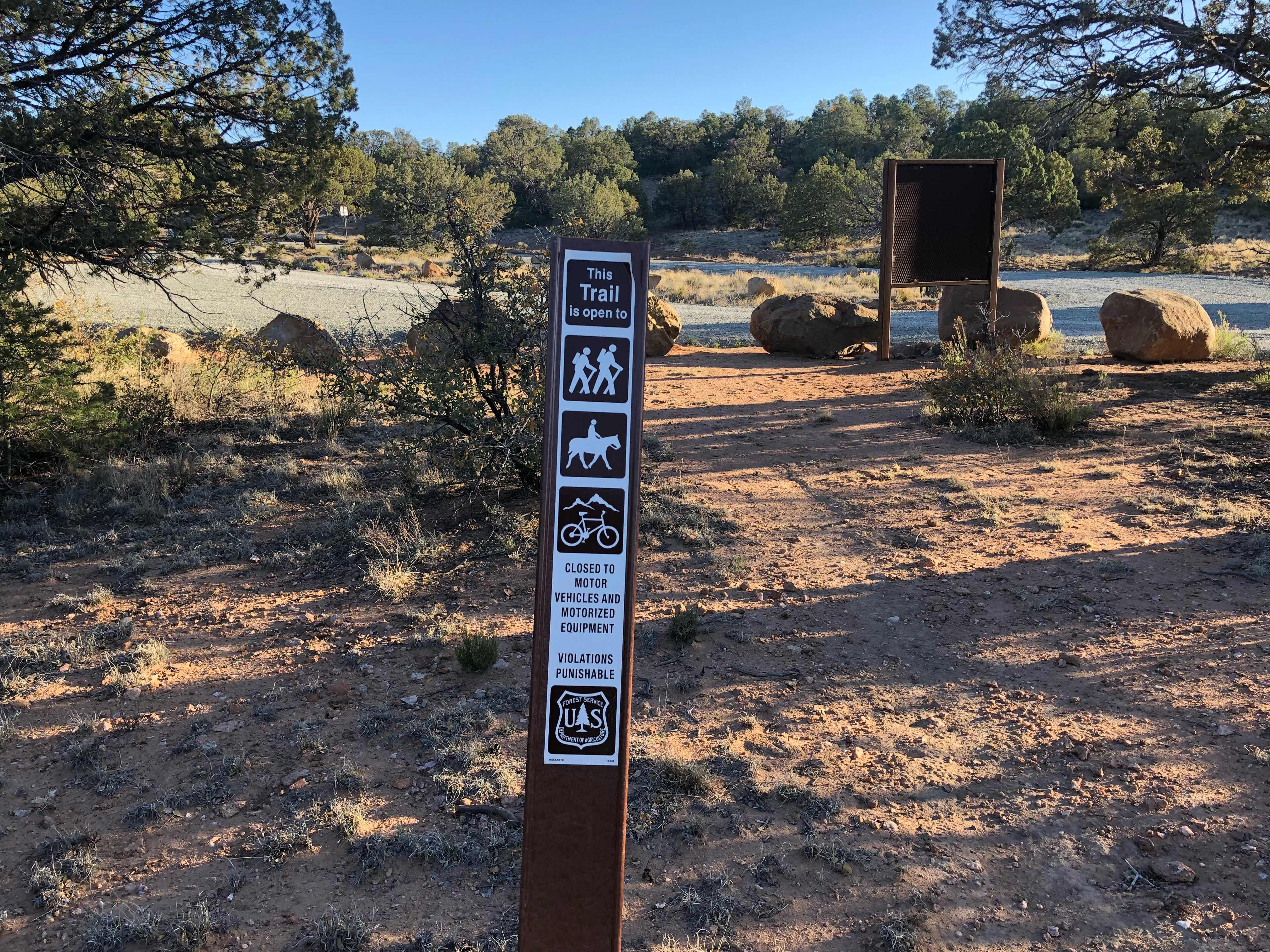 So nice seeing a sign that I was on NFS land
My first water source was 7.7 miles away. I carried more than enough from the windmill well yesterday so I had plenty of water to get there. The first part of the day was pretty easy. I hiked mostly on proper trail through a lot of tree cover. Except for the trees it was similar to the high deserts of California. I followed the contours of the mountain without going or losing much elevation. When I got close to the water I noticed that it was off trail and down a dirt road. As I started walking towards it I began to wonder if I really needed water. I still had over 2L left from yesterday. I sat down on the dirt road to think things over. That’s when I finally thought to check the elevation profile. I noticed that I had a climb over 2,000 feet over a few miles. On the AT that would have been standard. By PCT standards that was significant. At this current stage of the CDT I knew it was going to be difficult, but I was excited. Any climbing practice/training I get in now will be a big help in Colorado. I’m also glad that I live at 9,500 ft elevation. Climbing to over 8,000 feet shouldn’t be too hard on my lungs. I did feel bad for all of the sea level hikers. They are in for a tough climb. Seeing the elevation profile made my water decision much easier. There was no way I was carrying extra weight over that mountain. Once I finished the climb, water was only 3 miles away. Just as I was packing up to head back to the trail Scott(Safety Turtle) walked up. He had just gotten water. You might wonder why I always put his trail name in parentheses. It is because he is not a huge fan of trail names and prefers his true name. As we were chatting he decided he had way too much water. I was down to 1.5 liters. He decided I needed more water and gave me half a liter. He’s a nice guy, but I’m pretty sure his main goal was to shed 1.1 lbs of water weight. I let him hike ahead of me and drank most of the extra water he gave me. It’s easier to carry in my stomach than on my back. 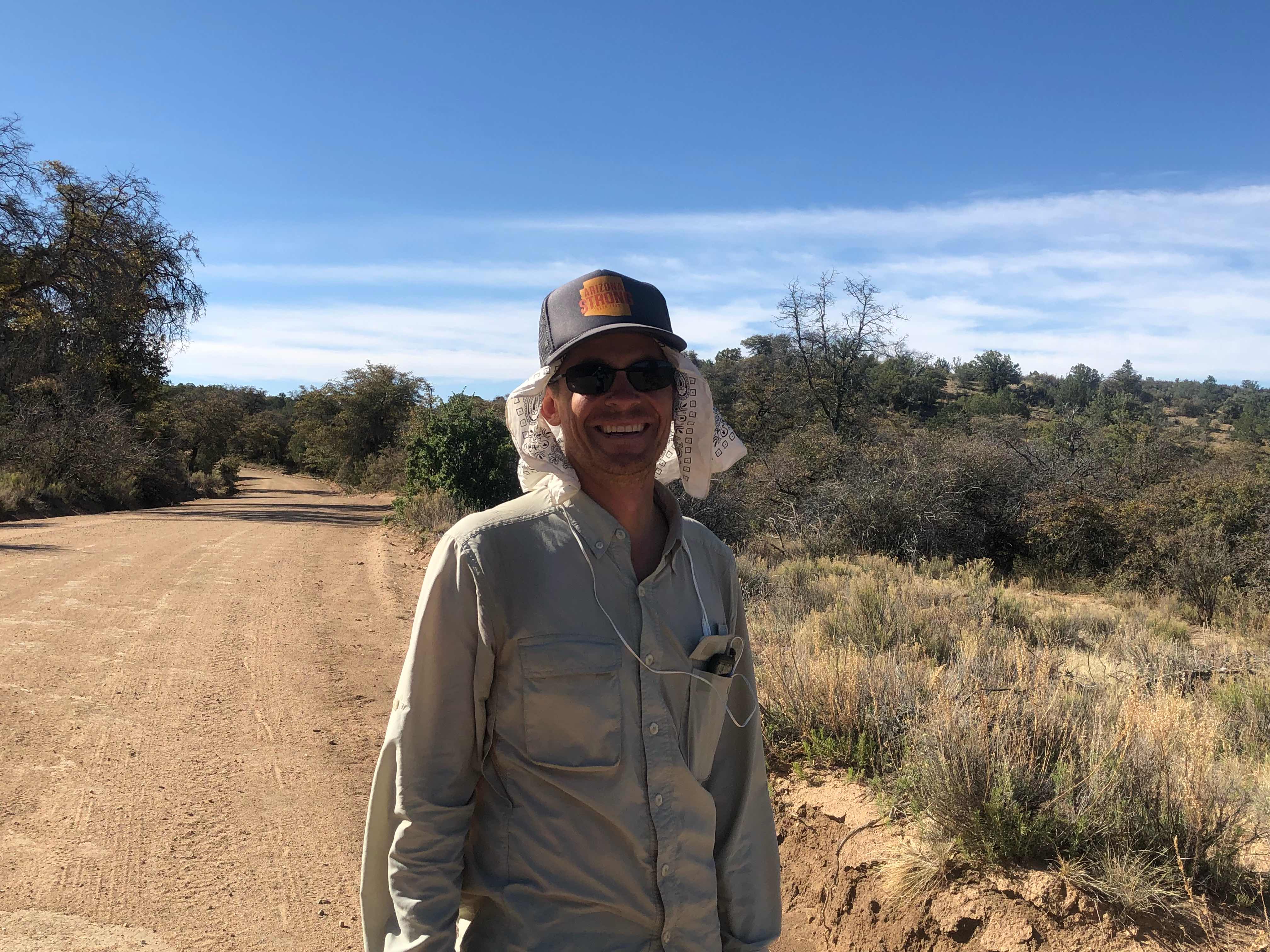 Safety Turtle(Scott)
I was eager to get the big climb over with so I set out with a pretty quick pace. I think I still had a few miles before the climb began. I quickly caught up to Scott and he let me pass him. 20 minutes later I walked up to a trailhead parking lot and noticed a sign announcing trail magic. I really didn’t expect to see much of that along this trail, much less in New Mexico. I was cautious not to get my hopes up. Several times on the PCT I saw signs for trail magic, but no actual magic. Once I got to the parking area I didn’t see anything. The sign said it was on a loop, so I took a chance and walked around the area for a bit. I was ecstatic when I found it. Turquoise and her boyfriend(sorry I can’t remember his trail name) both hiked the PCT individually and met on the AT. Now they live in Silver City and come out and do trail magic whenever they can. They were really nice and had a ton of info about the Gila River area. I hung out with them for an hour. I was so happy to have an ice cold soda, donut, and cupcake. Thanks guys! You rock. 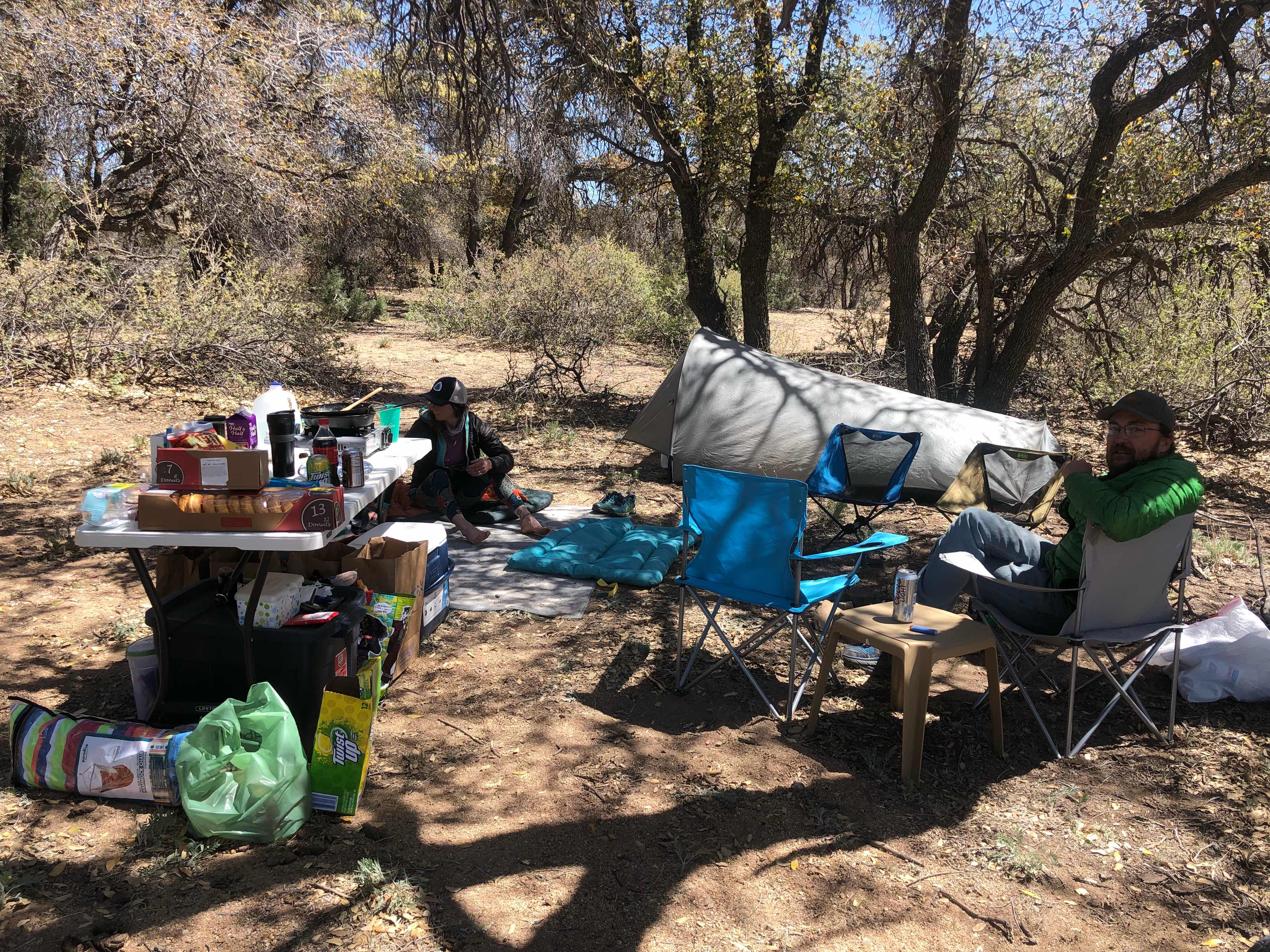 Trail magic
For the next six miles I got high, as in 8,000 feet high. I really thought it was going to be a gradual climb like the Californian high deserts. Boy was I wrong. There were two or three pretty steps pitches. I was definitely huffing and puffing. I was getting a little overconfident about the high mileage I have been hiking. Nothing like a little bit of elevation change to knock a girl down a peg or two. I still got my miles in today, but I hurt all over. I think every muscle in my body hurts right now. Pain is good though. My climbing muscles need to start getting their workouts. Colorado isn’t going to be flat. 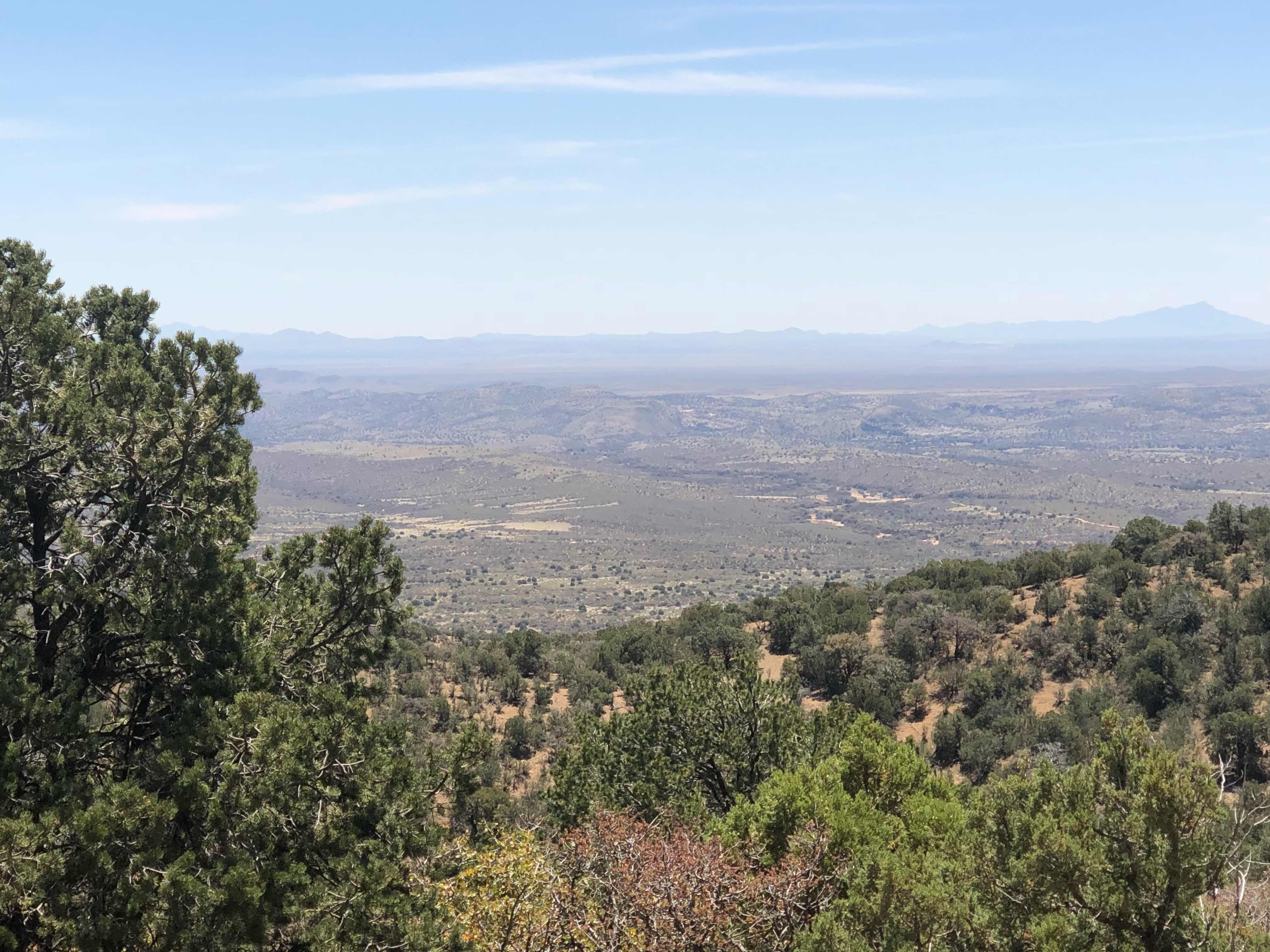 Mexico is back there somewhere 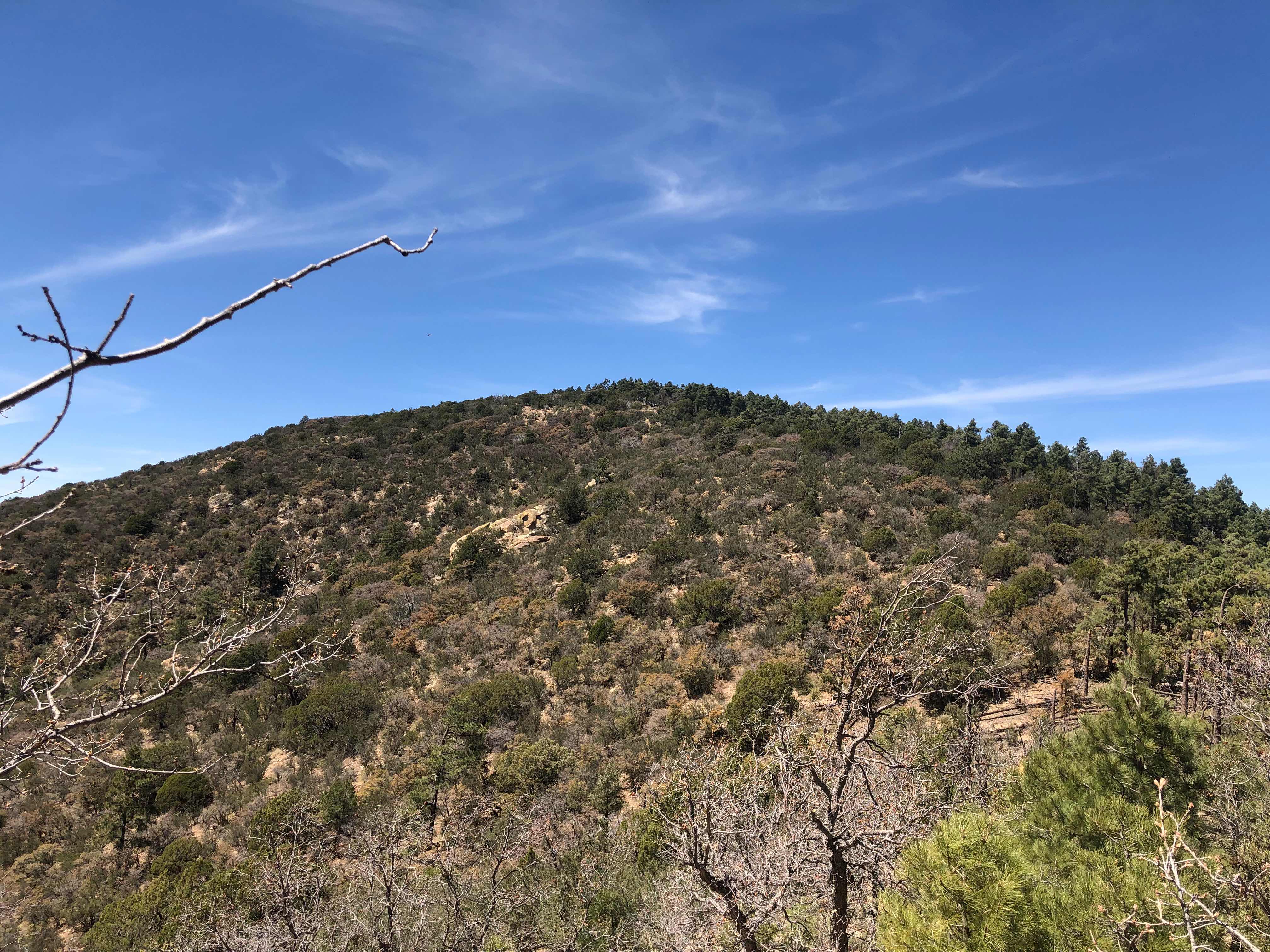 How much wind has to constantly blow through here for a tree to grow like that(hawk photobomb)
As excited as I was to finally be climbing mountains again, I was equally excited to be done. I did accomplish my second goal of the day. On the way up the mountain I had enough of hiking in pants, I stopped and finally let my legs see the sun. And yes mom, I put sunscreen on. The rest of the day was tough. My legs were like jello and the trail went downhill very steeply. At one point I stopped to take a break and managed to sit down on an anthill. All of a sudden hiking in shorts didn’t seem like such a good idea.

View from the top
On the way down I had to check my position constantly. Unlike the AT, water sources aren’t marked along the trail. If you’re not paying attention you can walk right past. I still had plenty of water, but tonight is another dry camp. This water source, mud spring, is also the start of an alternate that I’m taking. It is a long and complicated reason why I’m taking it and I don’t have the energy to lay it all out tonight, maybe tomorrow I’ll get into my reasons. The short of it is I’m hiking a route that was the official CDT up until 2 years ago. It was supposed to be easy to follow even though there are no cdt trail markers. That was definitely the case. I had no problems finding my way. 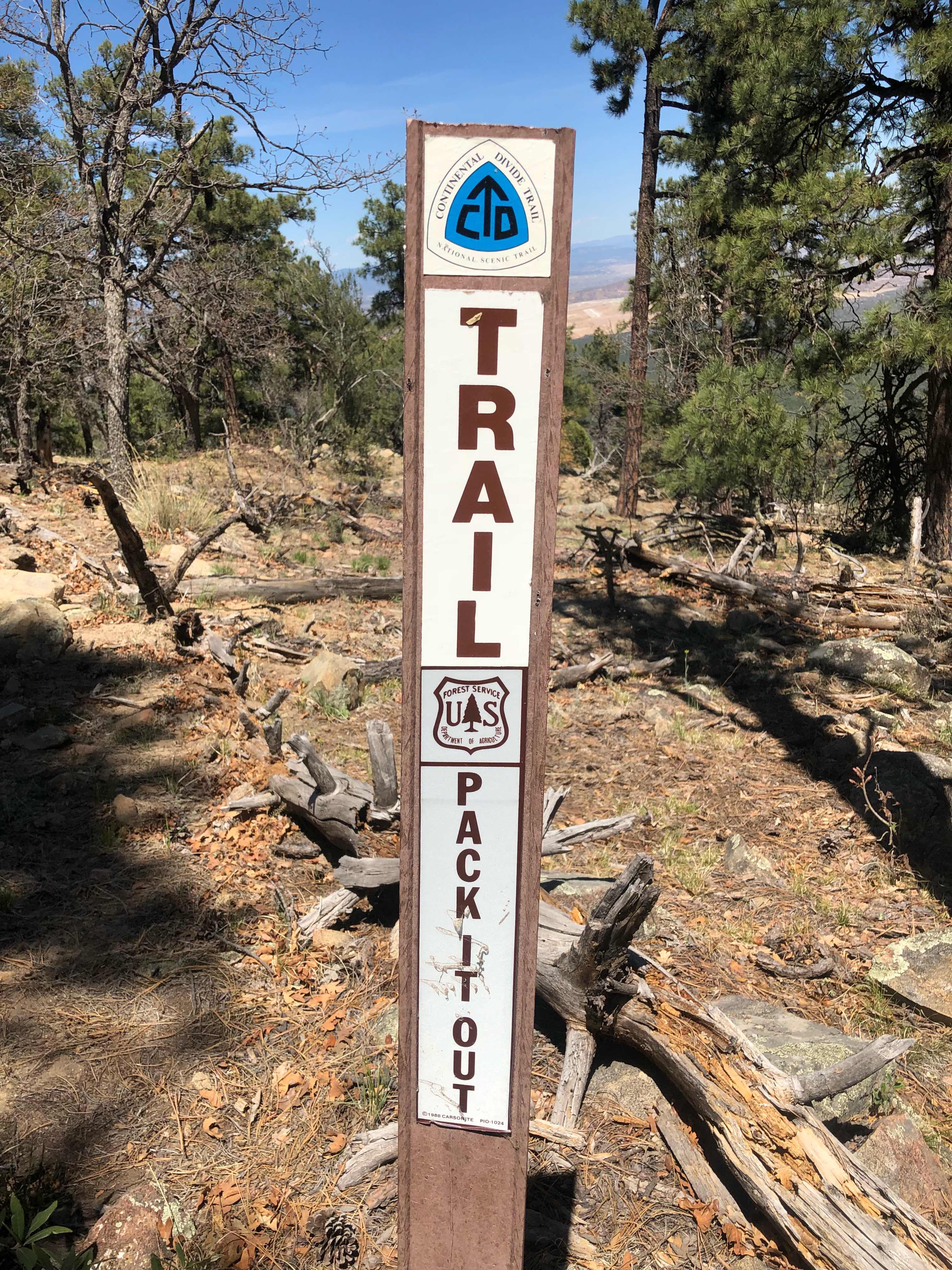 Sign right before my detour. Made me wonder what the Packing It Out Guys are up to this season
Tomorrow is going to suck! There I said it. I have a 16.2 mile road walk to contend with. Of those miles, 4 are on a hard packed dirt road and the other 12.2 on Highway 90. The only good thing is it is another town day. I hope to finish the highway before it gets too hot out. I’m also hoping for very light traffic.
"God has given us two hands - one to receive with and the other to give with. We are not cisterns made for hoarding; we are channels made for sharing." - Billy Graham