Incomplete Data: Daily up/down: +1,594.2ft/-975.1ft
Incomplete Data: Gila Alt elevation unknown
+1,3070/-10,434.8
The remainder of last night and a good part of this morning was spent contemplating what to do about my ankle/foot. Due to the high miles I’ve been pushing and my pack weight being heavier than I would like because of long food and water carries, I think I have an overuse injury. My body probably could have used a day lounging around in town, but I wasn’t convinced. Part of me believed that a day not hiking would be bad for my body, because I would stiffen up.  Another consideration was budget. Town days are expensive. Ultimately I decided to leave town late and to hike slow and break often. Check out time for my hotel was 11 am. I decided to grab a latte at Javalina coffee. The owner and staff were very nice to me yesterday and the latte was on point. I slept in until 7am and then headed over. Javalina was only 1.5 blocks away and my ankle felt ok walking there. I scored a nice comfy seat on one of their many couches and enjoyed a double vanilla caramel latte while I finished reading my book. The owner came by to chat with me for a little bit. After our conversation yesterday she decided to go and buy a notebook so hikers could sign in. I had told her that was one of the ways we connected with one another. I was the first one to sign it. How cool is that? 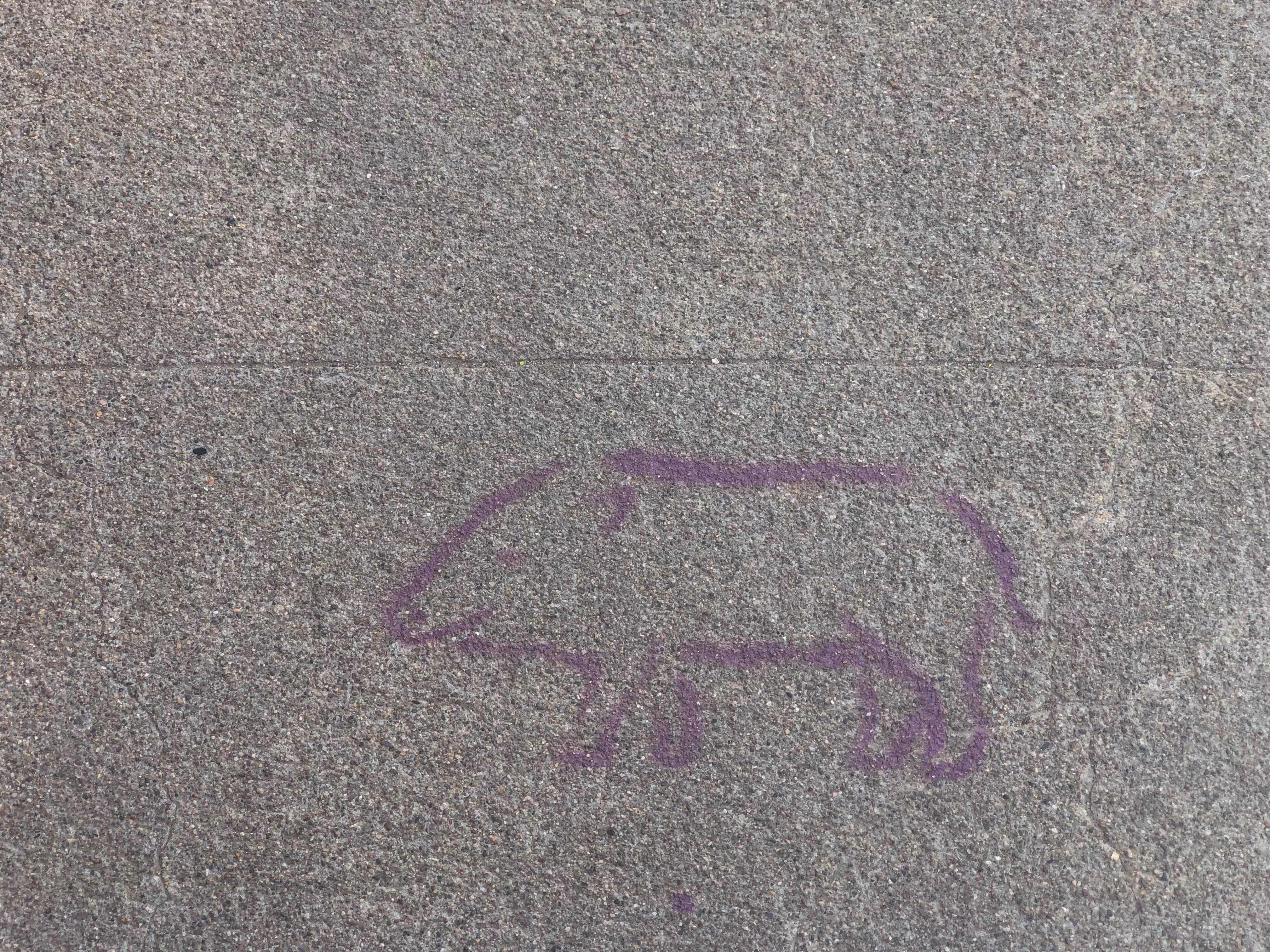 Javelina chalk art outside the coffee shop
It wasn’t until I headed back to my hotel room that I realized I had forgotten to eat breakfast. I guess I haven’t really hit the full blown hiker hunger stage yet. While I was packing up my stuff and tidying up my room a little I finally decided that I would go ahead and leave town. I just didn’t feel like taking a zero. Other than my ankle I feel good and I’m happy with the progress I’m making so far. I really don’t have a date that I have to finish by, but it would be nice to be done at the end of August. That would give me enough time to work for 4 or 5 weeks before summer season ends. I have allowed for only 8 zero days in my schedule. That is a fraction of what I took on the AT and PCT. I think it will be easier to stick to that schedule since I don’t plan on hiking in a group. You know what they say about best laid plans and all?
Once I made my decision I was eager to get hiking. I had a lot of road miles I had to hike and wasn’t looking forward to them. I thought about getting something to eat on my way out of town, but I’m already carrying more than enough for the miles I have to hike before the next resupply. Plus I didn’t want to spend the money or time. As I was walking down Main Street I passed not one, but two yarn stores. Hey Airlock, I think you would like this town. 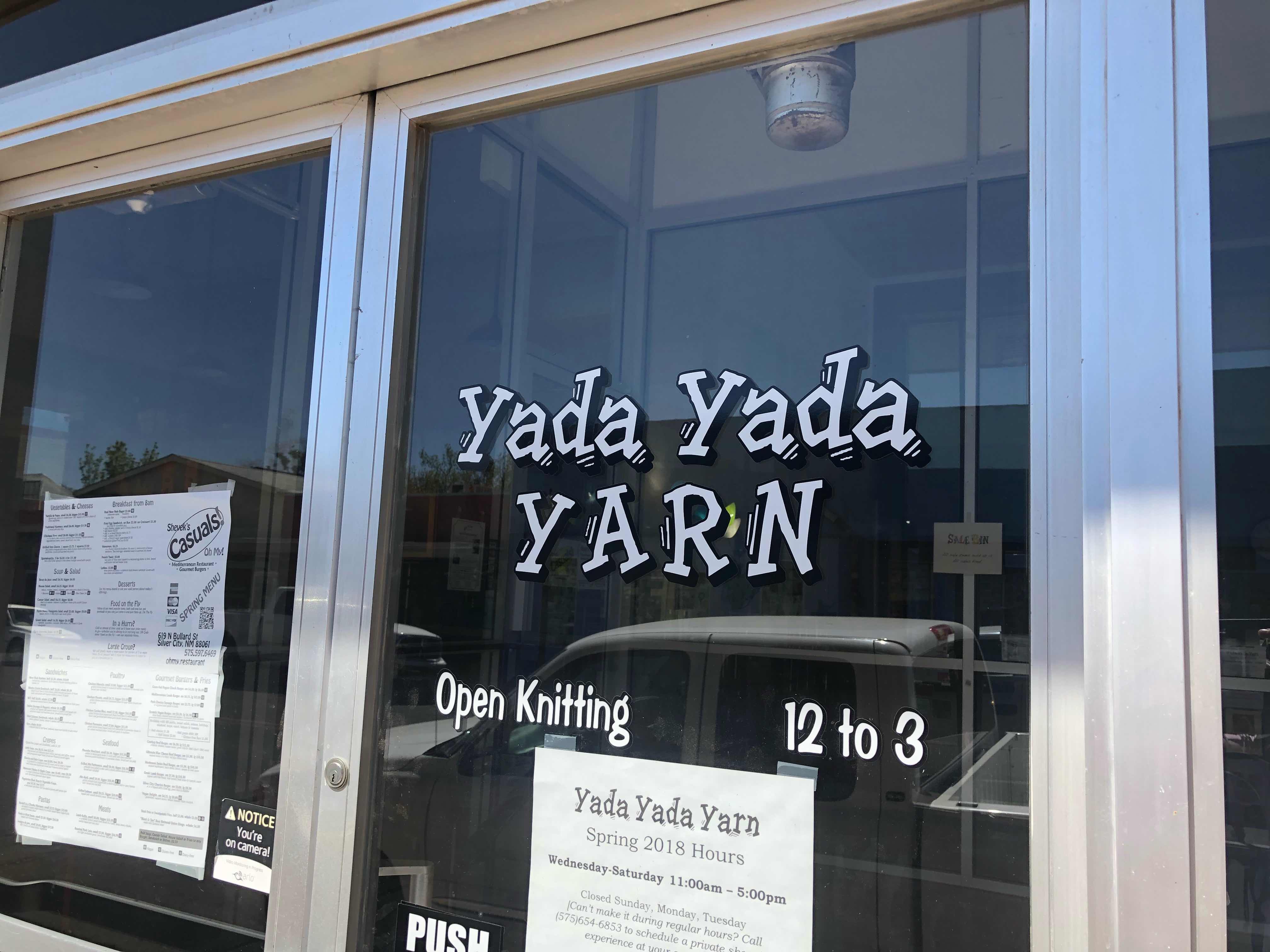 A reason for Airlock to hike the trail?
To get back to the trail I had to hike nearly a mile. During that time I passed by a few of the locals I met yesterday. They all wanted to know if I wanted a ride to the trailhead. Since it was only a mile away I declined. One lady looked at me like I was crazy. She said it was almost thirteen miles away. It was my turn to look at her like she was crazy. I got out my phone and showed her where I was going. Turns out she was asking to give me a ride past all of the road walking, directly into Gila National Forest. I was sorely tempted, but turned her down. I might not have an exact trail to follow, but I’m staying “ true to the thru”. Meaning I want to have continuous footsteps from Mexico to Canada. If a road walk is considered trail miles I’ll walk it. It didn’t take very long to regret my decision. Within a few miles my ankle was screaming, I was limping more than walking, and second guessing my decision to leave town. Another local named Jay, who I met right before the trail magic the other day, made this sign. He even pulled his truck over when he drove pass me today. We talked briefly. It took me a minute to place where I had seen him before
I stopped every few miles along the road to stretch. When I finish stretching my ankle feels fine for a little while then it will tighten up and start to hurt again. I’ll wait until it is almost unbearable then take another break to stretch again. I must have been a funny sight sitting on the side of the road doing stretches. I had more than a few cars honk at me and a few people slow down to yell out encouragement. At one point I was sitting down in the shade of a tree and saw movement out of the corner of my eye. I saw another hiker coming towards me, but something didn’t look right. He had on long cargo shorts, the kind that no self respecting thruhiker would wear. That was about the time I realized that his pack was moving around. Turns out that it was a local taking his kid for a walk. The toddler was in a kiddie carrier. 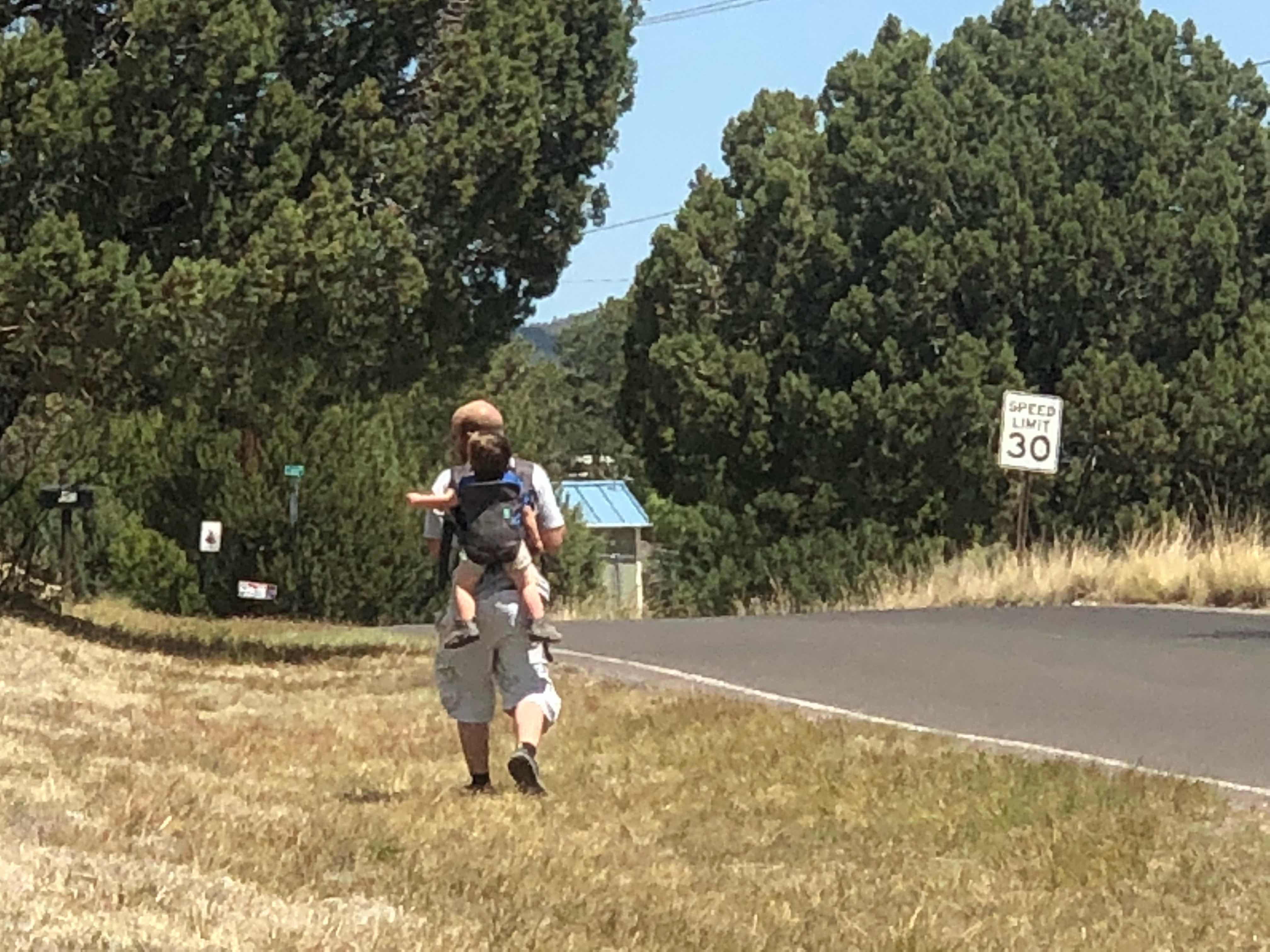 Future hiker?
After almost 6 miles of paved road, I had the enjoyment of walking on dirt roads. That is how the remainder of the day stayed. The brief period of time I spent hiking on actual trail my ankle held up for longer. I must change my gait on hard packed surfaces and that is giving my hip flexor, quads, and calf muscles kittens. 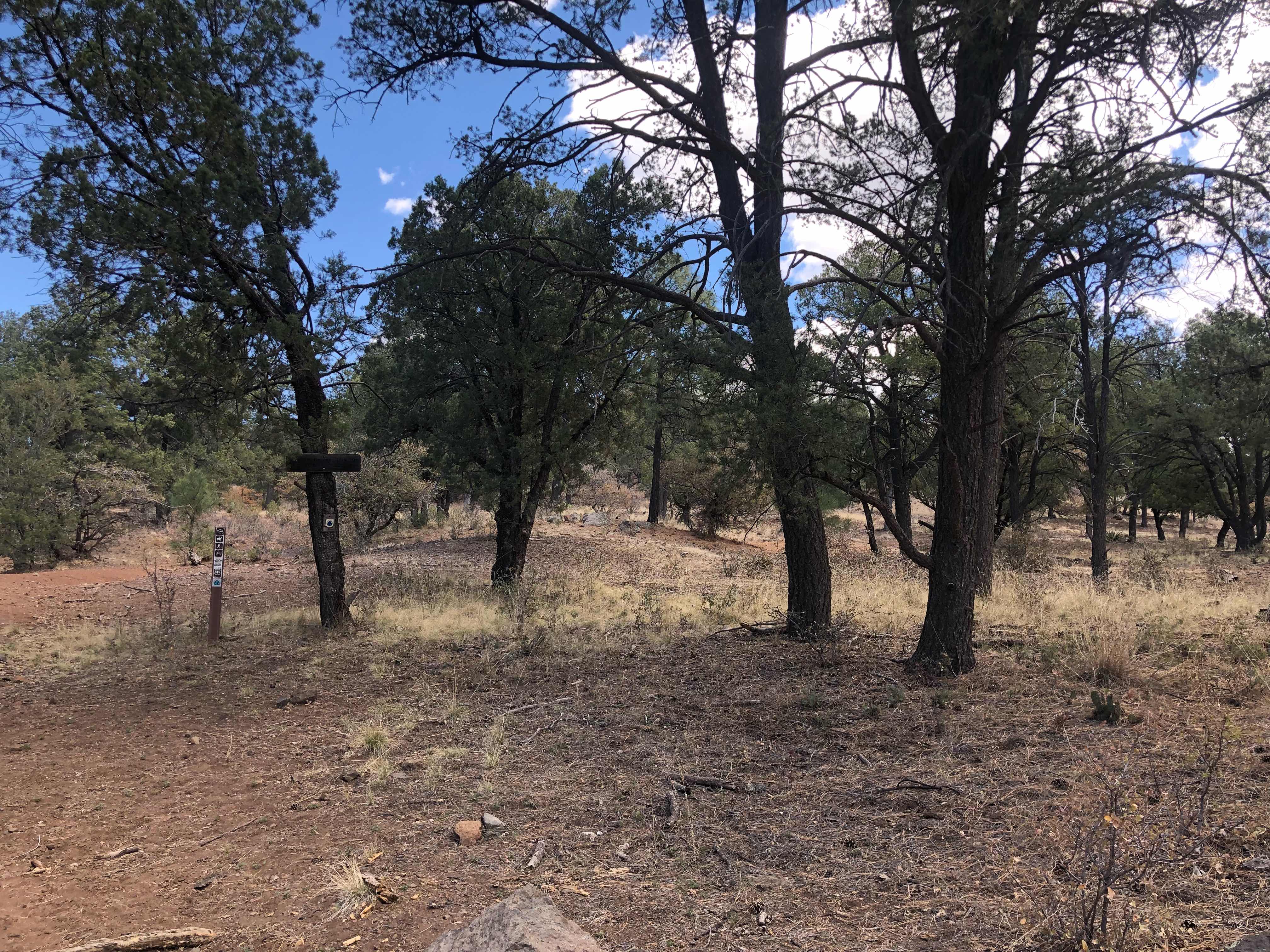 One of the easier dirt roads 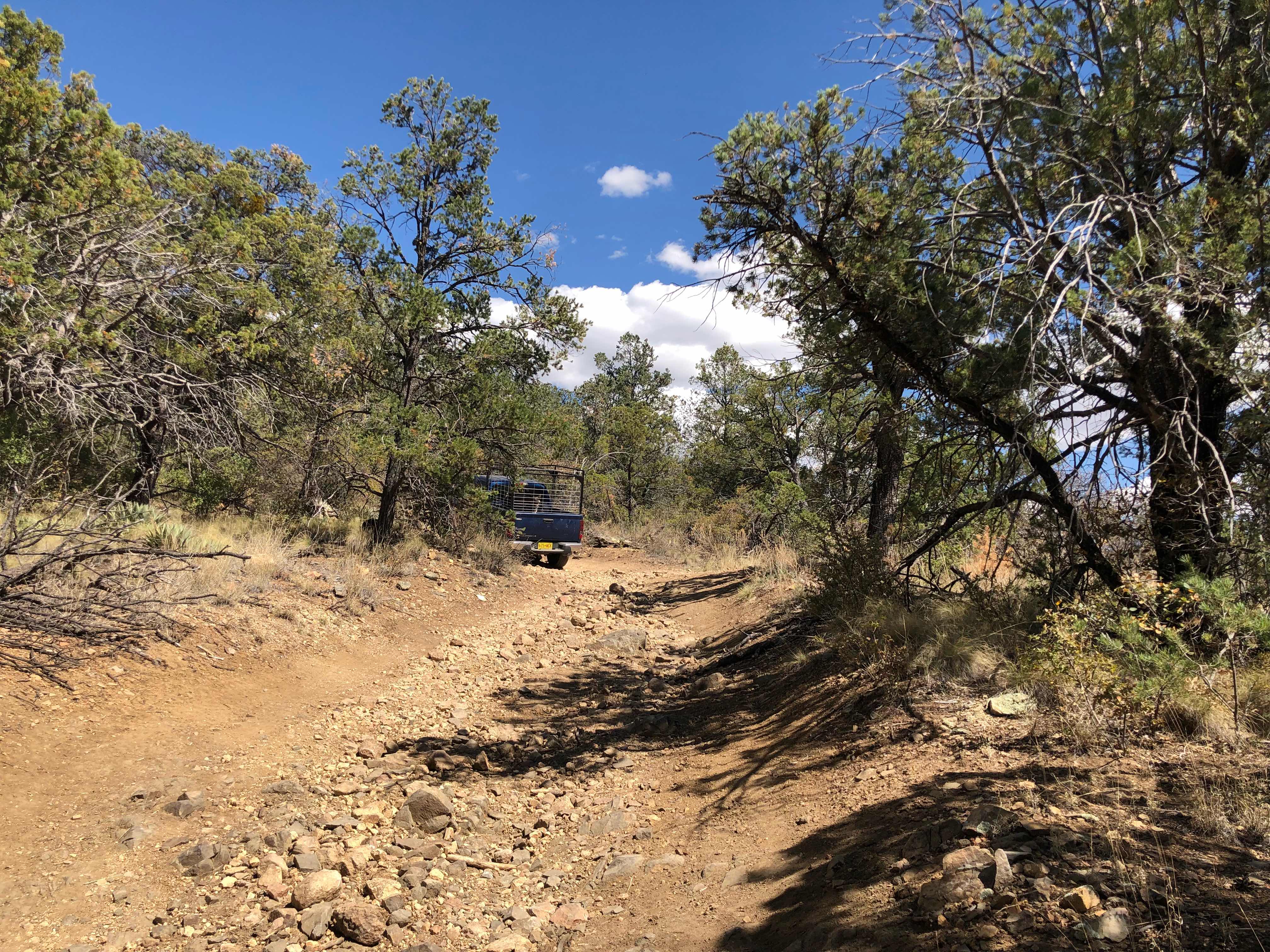 4x4 road. These were the worst
The exciting part of the day was also the end of my day. I hit my first natural water source today, Bear Creek. Although it wasn’t really flowing it was nice to have a normal water source instead of sharing a trough with cattle. There was also a nice established backcountry camping area. It had several fire rings and nice flat tenting spots covered in pine needles. My favorite feature were the sitting logs. I decided to cowboy camp again tonight. Although I forgot how much mosquitos also love to hang around water sources. I’m hoping that once the temperature drops they will leave me alone. 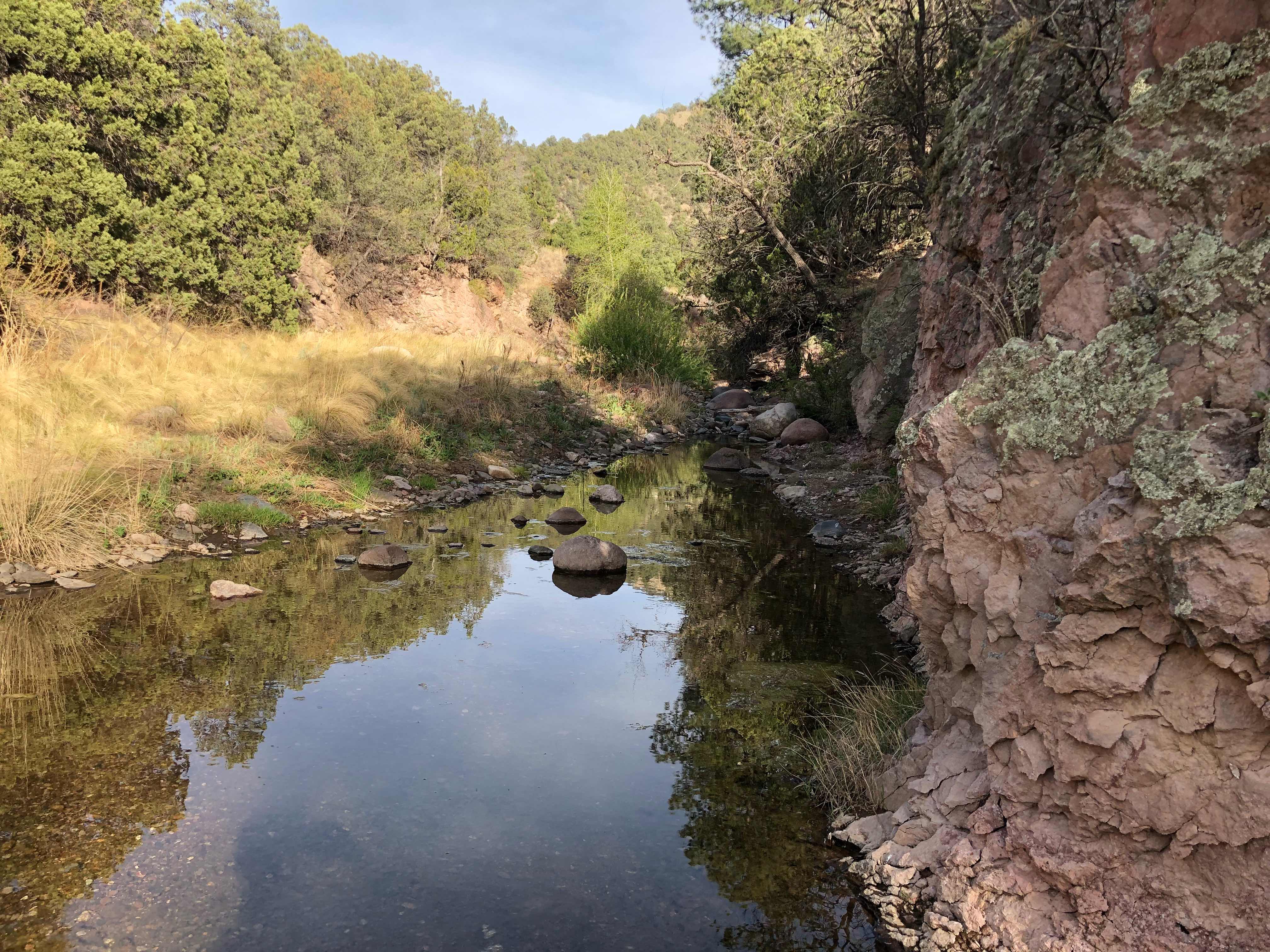 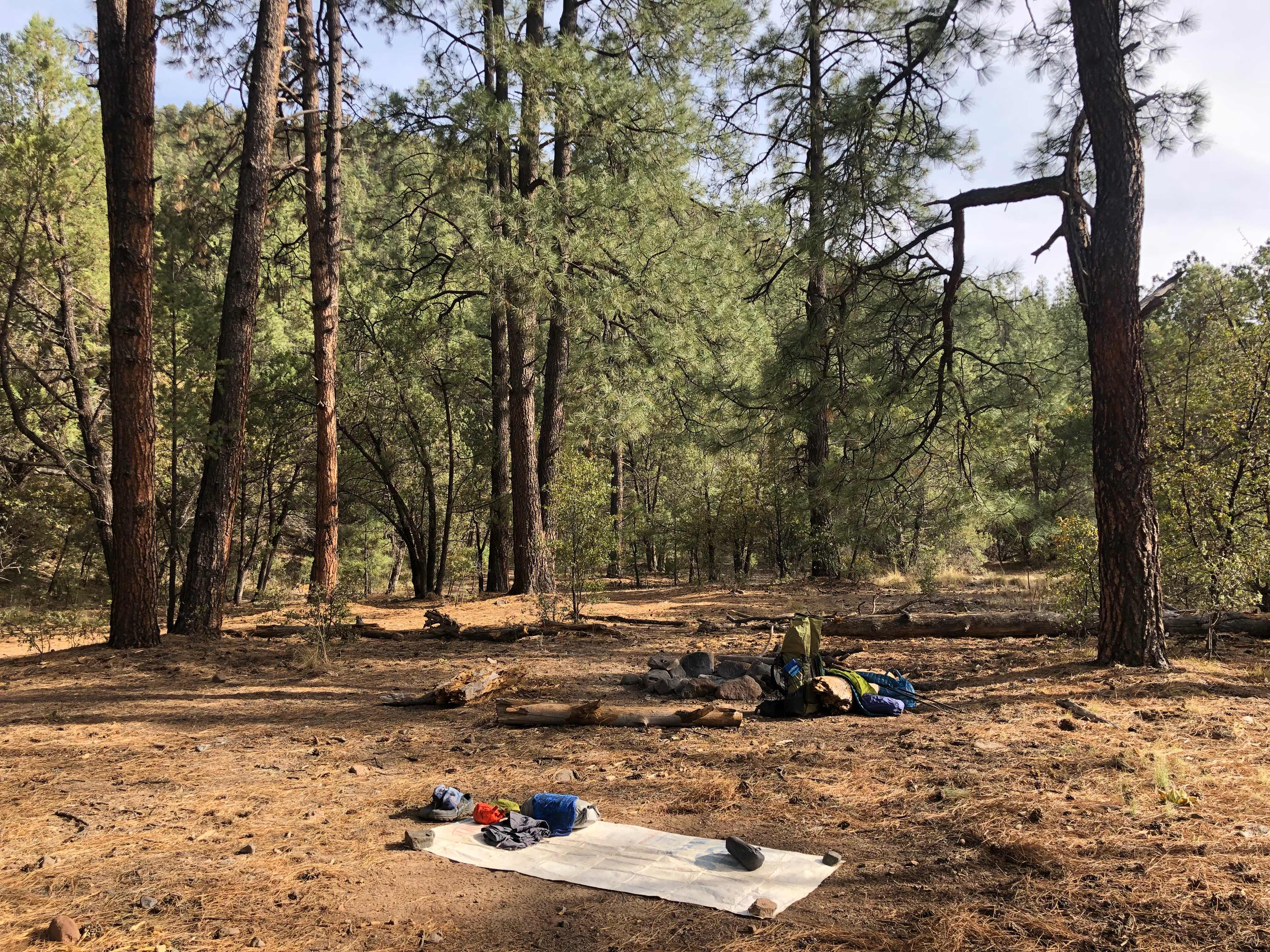 Home for the night
As I walk around doing my camp chores my ankle/foot feels fine. I hoping I made the right decision by not taking a zero today. Every time I had to stop and stretch today I second guessed myself. At one point I could barely even take another step. As I sat down to stretch once again I thought I had really screwed up. The pain was getting a lot worse every time and I was having to stop more frequently. Then I realized that I’m a badass hiker and sometimes you have to push through the pain. I also realized that the pain was only that severe because I was going downhill over steep and rocky terrain. Going uphill doesn’t seem to hurt at all, nor does hiking on proper trail. Let’s hope that tomorrow I get much better and the trail conditions improve. I know that in about 20 miles I’ll have better trail, but I’m not exactly sure what comes before that. Slow and steady with a lot of breaks seems to be my temporary new hiking style.
“I’m a slow walker, but I never walk back.” - Abraham Lincoln