Day 31- This Little Piggie Went To The Market 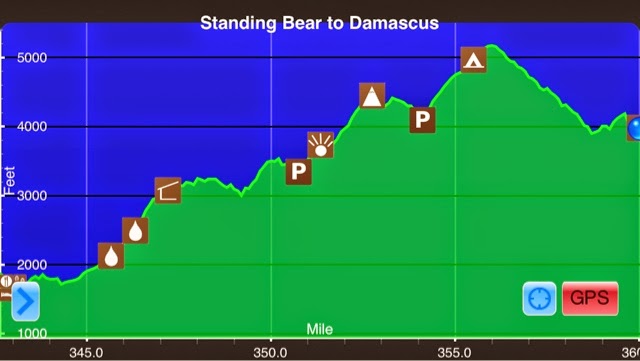 So much for a nice easy day. I had planned on only hiking 10-12 miles today, but that plan was thrown out the window bright and early this morning. I was up early and had my bag repacked with way too much food. When I got down to the lobby, I discovered it was full of hikers. It seems like every person I have met recently was there. 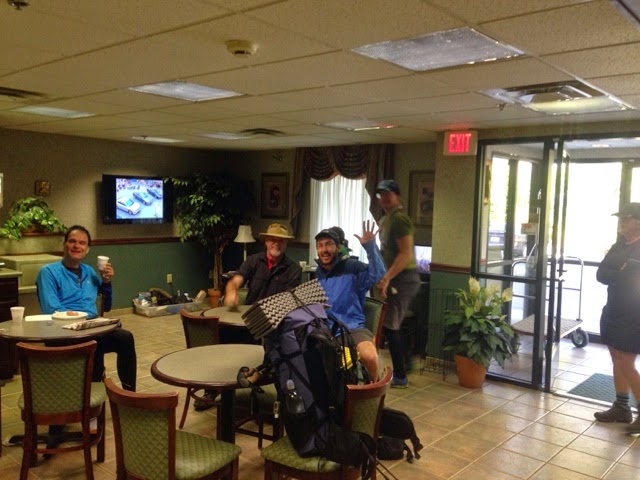 Spock, Big Mountie, Pysch, Dino, and Seashell(not pictured;Lorax, Silva, Bon Bon, Anchor, Gadget Man, and Stripes)
We caught a shuttle back to Uncle Johnny's hostel where the AT crosses through the edge of town. Even more hikers were there getting ready to start the day. I think I've caught up to the large "bubble" of hikers that left Springer Mountain before me. I started the day with Big Mountie, Pysch, ChampagneJam, Dino, Seashell, Bon Bon, and Anchor. Mountie, Pysch, and Champagne are the guys I met on Wednesday that hike 20-26 mile days. I really get along with them and they guilted me into hiking further than I'd planned on. As most of my family and friends know, I can't turn down a challenge. With such a large group starting at the same time we quickly spread out along the trail. Nobody hikes at exactly the same pace. I was somewhere in the middle of the group. Today didn't have very many views, but it definitely had a good amount of uphill climb. The first climb of the day did have a pretty good view back into Erwin. 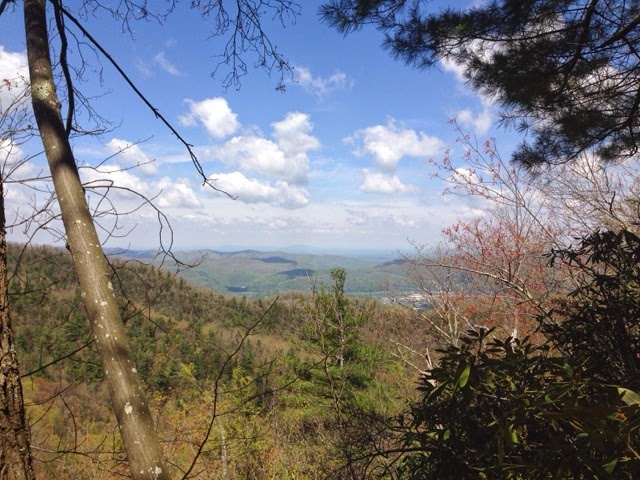 Erwin, TN
Just after the first climb of the day a few of us stopped in at a shelter to have lunch. After being in town everyone's food bags are very heavy. Most of us end up eating a big lunch to try to cut weight down. At the shelter we were told there was trail magic four miles down the trail. Everyone packed up their bags pretty quickly to try and hit it.
By the time we got there it was winding down. All the drinks and fruit were gone. I had a brownie and some banana nut bread followed by some great conversation and a lawn chair to sit in. Thanks to BT for taking care of so many hikers(he said he had fed 40+ hikers today) 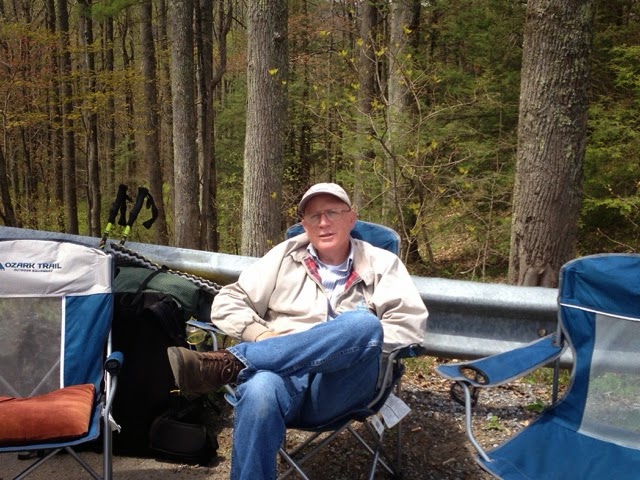 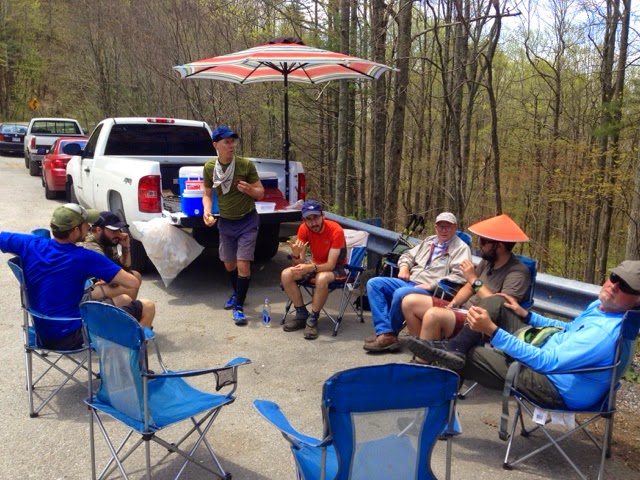 ?, Dino, Pysch, BT, Raydin, and Beans
I didn't stay for very long since I still had almost 10 more miles to go. Anytime we come to a road or gap such as this, you have to climb back uphill. This was no exception. The climb up wasn't as strenuous as I thought it would be. The spot we were hiking to was called, Beauty Spot Gap. It really lived up to its name. Hiking up to a bald is great because you know you're going to get a great view. 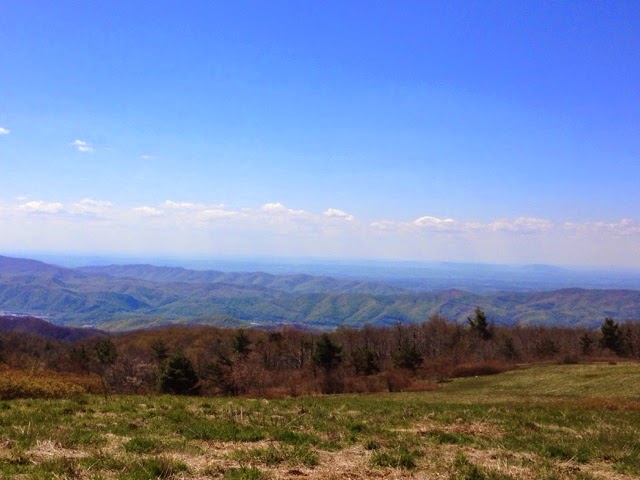 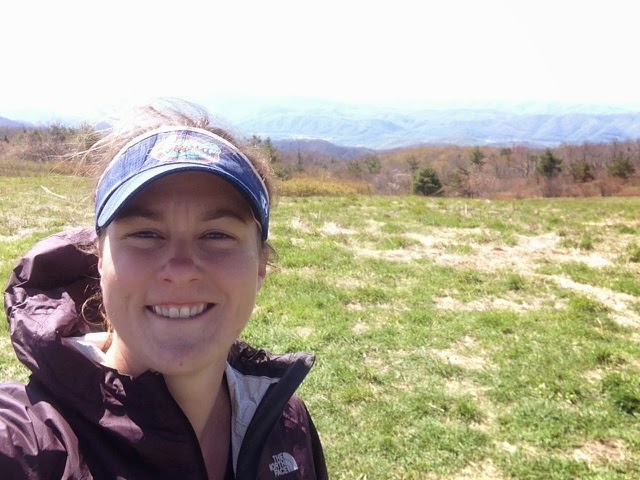 Beauty Spot Gap was accessible by a gravel road with a parking lot close by. A very nice guy brought an ice chest with beers and fruit up for thru-hikers. I declined the beer, but enjoyed an orange. Once again I didn't stay very long. I still had 7 miles to go, with one very long rocky uphill left. Today was a preview of what's to come this summer. It was only in the 70's, but being exposed with very little forest cover, it was hot. I had to stop and filter water way more often than usual. After the extended uphill rocky climb, I entered what the guidebook described as, "dense spruce forest".  It was really cool. It felt like something out of a movie. 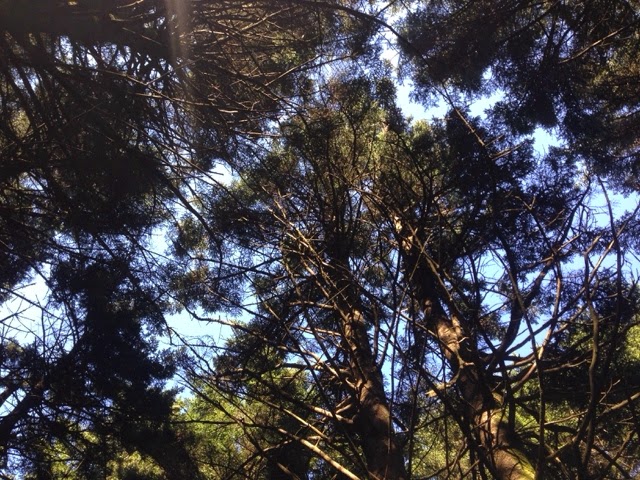 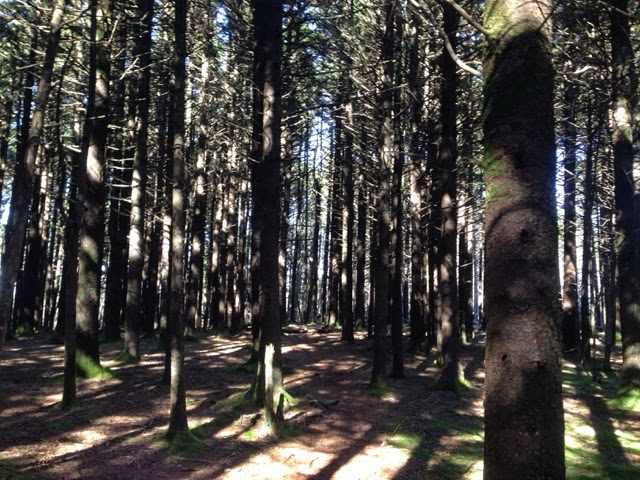 Only 4 miles to go
Right around this spot I met a lady who was out for a day hike. She was a little odd, to say the least. She was telling hikers that a pig lived in the forest. She said it was domesticated and liked to be petted. The pigs name was, Truffle. I honestly thought she was joking or mentally ill. I continued through the forest and never saw her mystical pig.
As I neared my goal of cherry gap shelter Input on a podcast to listen to. I needed something to take my mind off of how exhausted I was. As I listened to NPR, I was not really paying attention to my surroundings. I only had time to register something was odd before I nearly tripped over something on the side of the trail. 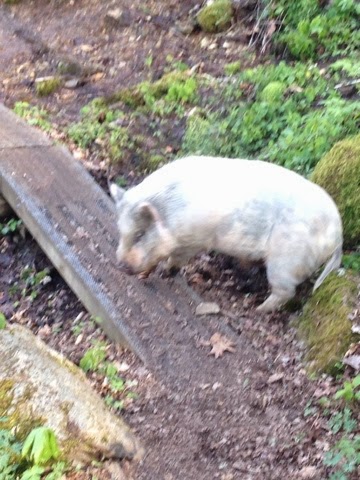 I Found Truffle
The crazy pig lady, was no longer crazy, there was indeed a domesticated pig on the AT. Truffle followed me the next half mile to the shelter. Just when you think you've seen it all, boom, a pig follows you home. I'm guessing thru-hikers feed her pretty regularly, so she shows up at the shelter around dinner time. She hung around with us until dark and then disappeared. The shelter was packed tonight. There's probably 30 people camped here tonight. A lot of familiar faces and a lot of people I've heard of, but never met.
Tomorrow will be another long day. I'm planning on hiking another 17 mile day. It's going to be warm, with lots of uphill again. I stayed up way too late last night(2:30) and I'm looking forward to a good nights sleep tonight.
"You can keep going and you're legs might hurt for a week or you can quit and you're mind will hurt for a lifetime"
-- Mark Allen 6 time Ironman Champion
Posted by Yoda at 7:14 AM