Day 40- Just One Of Those Days 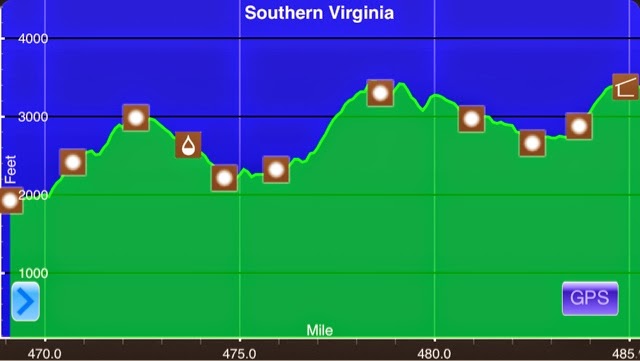 First off I'd like to give a great big thank you to Mrs. Cherokee for hosting me this weekend. She got up at 5 am to get ready to drive us back to Damascus. She spent a few hours driving us around town so we could get things done faster. I really appreciated it. The Cherokee's went above and beyond to help us out.
We got to Damascus around 9, and then it was a mad dash to get things done as quick as possible so we could start hiking at a reasonable time. I couldn't call Salomon until 9 to try and get my shoe issue resolved. Once I talked to them it became apparent that it would not be a quick fix as I had hoped. I had to contact their warranty department, send in a form, take pictures, and then wait for approval before I could get a different pair of shoes. I just did not have the time. I decided to buy a different brand of shoe. I sent the Salomon's to my brother's house in Northern Virginia. He agreed to deal with the paperwork, so hopefully when I get to his house next month I'll  have a new pair of shoes waiting for me. After I decided on a pair of Merrell hiking shoes we went to the post office. Airlock and I both had unwanted items that we were sending home. Then it was a quick stop at another outfitters to pick up a few more odds and ends. We then headed to Cowboys, a breakfast restaurant inside of a gas station. They serve an amazing biscuit. I bought two, one to eat immediately and one for on the trail. Then we repacked our packs and finally set out.
We didn't get started until almost 11:30 and we were planning on hiking 14-16 miles. It was a very ambitious goal. My pack was probably the heaviest it's ever been. I, as usual, have way too much food.
After the initial climb out of town the terrain wasn't too bad. We played a game where we took turns quizzing each other on the state capitols. Airlock was pretty good at it and I was pretty bad at it.
The first part of the day went by pretty quickly. We made it to the first shelter by 3:30, so we stopped there to eat our biscuits. This shelter was .25 miles off the trail and a long walk to water as well. Later in the day I wished that I had skipped going there.
After lunch we all spread out along the trail. It was only 6.3 miles to the next shelter and we planned to meet there at 6:30. We planned to stay there or hike another few miles and camp at an undesignated camp spot, it depended on how we felt and what time it was.
Shortly after lunch I began to really struggle. The terrain wasn't too bad, but with 6 days of food (way too much) and new shoes I was really hurting. My blisters are healing nicely, but they still hurt. I've also developed a new, but small blister on my right foot. So far I like the new shoes, but time will tell. 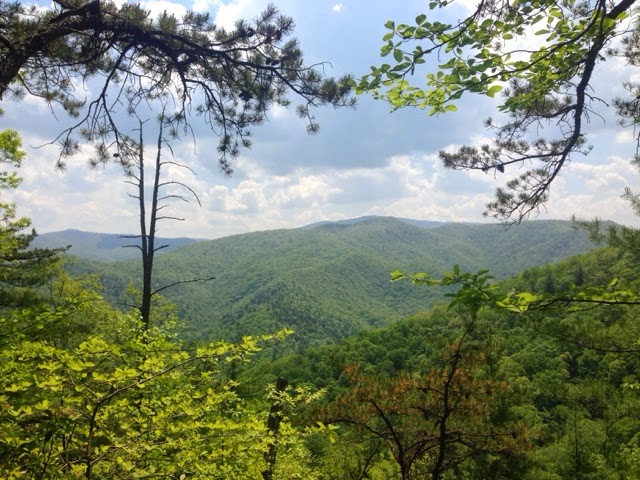 Almost walked right past without noticing the view
The one positive thing about today was the water sources, they were everywhere. That was really important because today was hot. I'm pretty sure it got up to the mid 80's. One would think that being from Florida, I would be used to the heat, but I just don't do well with it.
The trail out of Damascus is interesting because it follows a rail--to-trails bike path called the Virginia Creeper Trail. It looks like a fun course to ride. It follows a river on a nice wide gravel path. I'm not sure how long it runs, but one day I'd like to come back and check it out. It is a big draw for tourists to come to this area. Bike rentals are available throughout the city. 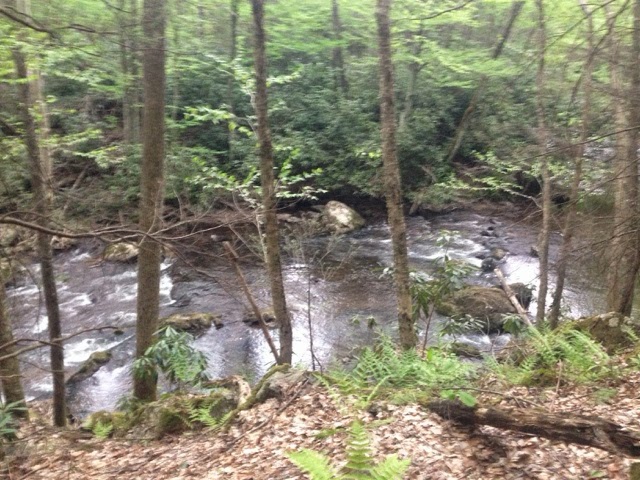 River that the trail follows 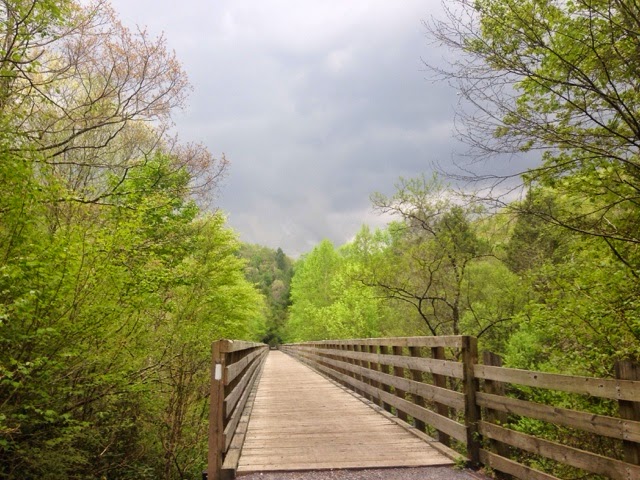 Bridge in the Creeper Trail over the river
Notice the clouds in the background? They sure got my attention. At this point I was only 2 miles from the shelter and I thought I had a chance of making it there before the rain started. I thought about taking a break under the bridge and waiting out the rain there, but I didn't want to get stuck in case it rained all night. I pushed on and picked up the pace, but it was a futile effort. The wind picked up and it started to lightning and thunder. It finally started to pour down rain half a mile before I got to the shelter. At first, it felt good because it was so hot out, but after a few minutes I was soaked. I wasn't too concerned though, it has been kind of warm at night and I had dry clothes to put on once I made it to camp. I got there at exactly 6:30, but Airlock and Cherokee had not arrived yet.
The shelter was pretty full when I arrived, but I only knew Tumbles and Putt-Putt. Tumbles and I talked for a little bit while I waited for Airlock. I figured with the rain and all, we would stay there, but I wanted to make sure we were on the same page before I got my stuff set up.
I didn't have to wait too long, Airlock showed up shortly after me, all smiles as usual. We agreed to camp there and began the process of setting up in the rain. I just set up my tarp and waited under it for a while. Once the rain let up a little I finished putting up my hammock and changed into my dry clothes. I was really glad that, unlike in the Smokies, it wasn't too cold out yet. Cherokee arrived shortly after, all smiles as well. I swear, nothing ever seems to phase them. After we were all setup we had a community dinner. It was more like appetizers than a proper dinner. It was getting dark quickly and nobody felt like cooking. As a result my food bag is still ridiculously heavy. I guess I'll just have to have a big breakfast and lunch tomorrow. 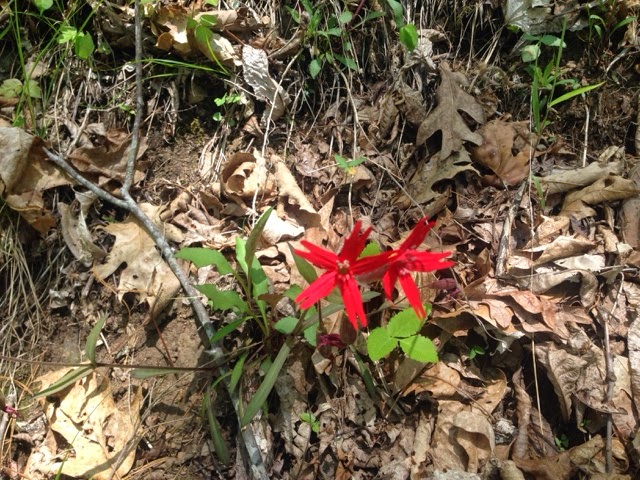 New flowers I haven't seen in the trail yet
Tomorrow is going to be a great day. We will cross the 500 mile mark and enter into the Grayson Highlands. I can't wait to see the ponies!!!
"Every person needs to take one day away.  A day in which one consciously separates the past from the future.  Jobs, family, employers, and friends can exist one day without any one of us, and if our egos permit us to confess, they could exist eternally in our absence.  Each person deserves a day away in which no problems are confronted, no solutions searched for.  Each of us needs to withdraw from the cares which will not withdraw from us."- Maya Angelou, Wouldn't Take Nothing for My Journey Now
Posted by Yoda at 6:28 AM