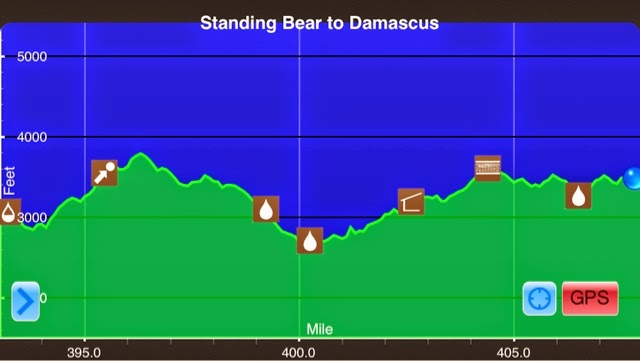 Thanks for bearing with my Yoda-speak yesterday. Once again, I'm sorry for the short post. The day started off great. The hostel I stayed at last night is well known for its amazing breakfast and it did not disappoint. The hostel also runs a bed and breakfast, but they manage to keep the smelly hikers in a different area. After we all took showers we were allowed in the B&B for breakfast at 8. The owners put out an amazing spread of food. The best French toast I've ever had with locally made honey and pralines, 3 different kinds of egg dishes, one had perogies in it, two different kinds of potatoe dishes, fruit, muffins, and a coffee bar. My only regret was I couldn't eat more than one plate. 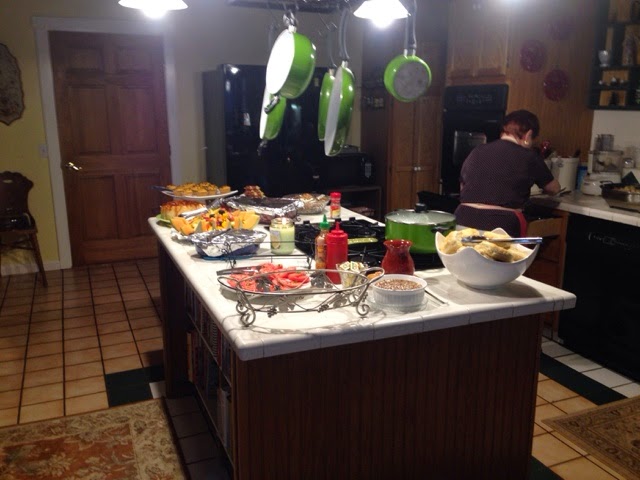 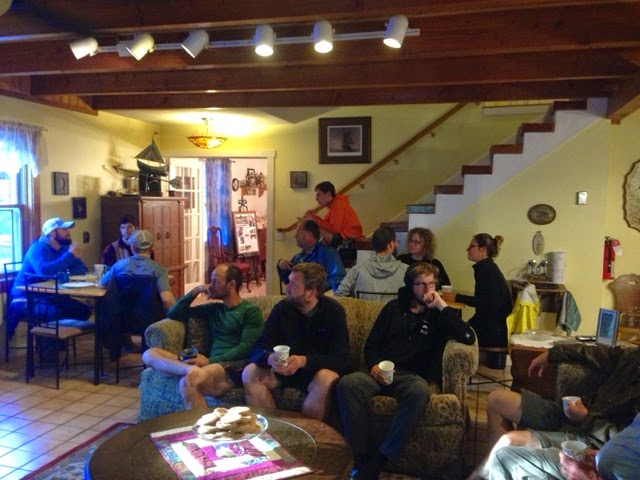 Over 20 hikers
I've had a few lingering problems physically the last few days, one of which is hot spots on the bottom of my heels. I'm hoping for the best, but they only seem to be getting worse. I'll be in Damascus, VA by Saturday and I really hope I don't have to buy new shoes again. The other problem has been really low energy. I wasn't sure what was going on, I thought maybe not enough calories or dehydration, but I figured it out last night. (Men and children might not want to keep reading) I just started my period, that always zaps my energy for a few days. Between my feet hurting and my low energy level today was more difficult than it should have been. With such easy terrain I thought maybe I could hit 20 miles, by 1:00, I knew I'd be lucky to do 10.
Today was also warm and humid, it almost felt like home(Tampa). I left the hostel around 9:30 and everything seemed to be going well, but I think that was the fried French toast high I was on. 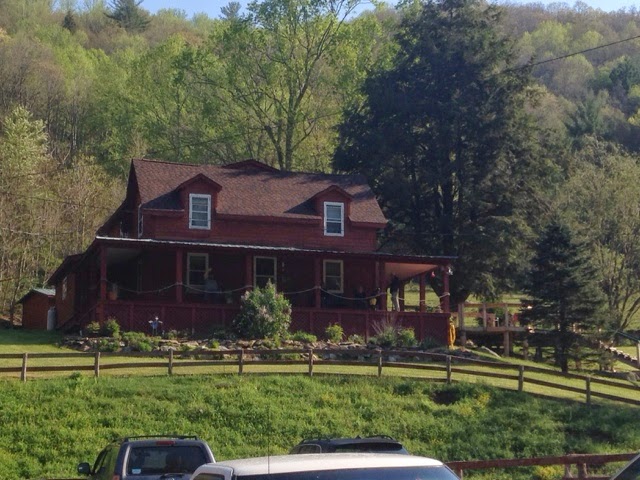 Big House of the B&B 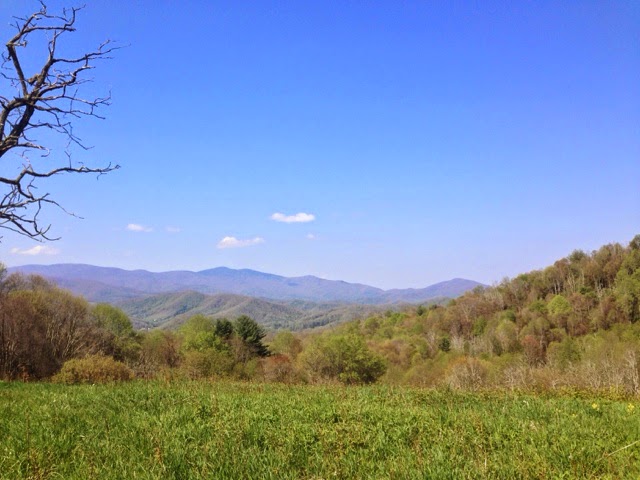 Early Afternoon View
Shortly after 11, I met back up with Airlock. She was planning on going to another hostel for pizza and ice cream. I told her I couldn't stop that early in the day and we hiked together for a little while longer. We were still together when we crossed the 400 mile marker. It's satisfying to be knocking out 100 mile intervals so quickly now. 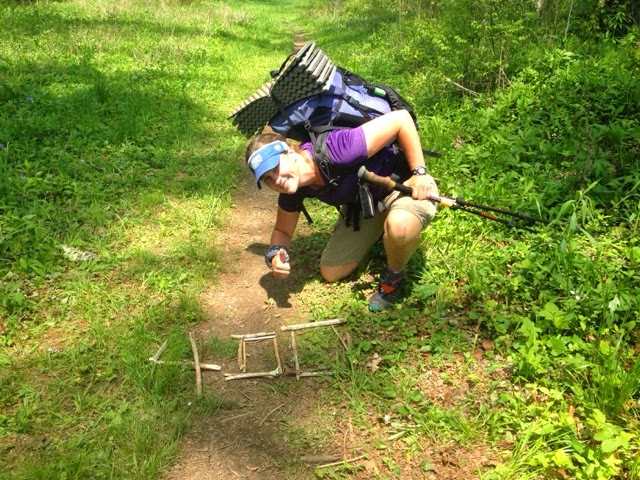 400 Miles
We parted ways at a shelter when I stopped for lunch. Shortly after I met up with Cherokee, he also invited me to the hostel for pizza and ice cream. I once again declined, my feet hurt, but I was still hanging in there. I had another 8 miles to go to hit my goal for the day, but I was definitely fading fast. A mile or two before the hostel more hikers(6'12" and Girl Scout) invited me to the hostel once again. This time I seriously considered it before I declined. A mile later I had to sit down and take a break. My energy was gone and my foot was killing me. I looked at my guidebook and once again decided to push on, I only had 5 miles to go.
I stopped a half mile later to snap a picture of a cool view and it started to sprinkle. Cool View
6'12" and Girl Scout caught up again and tried to sweet talk me with mention of Ben and Jerry's ice cream, but I said no for the hundredth time. A few hundred feet later was a sign for Springer Mt(the start of the AT), I thought it was cool so I took a picture. 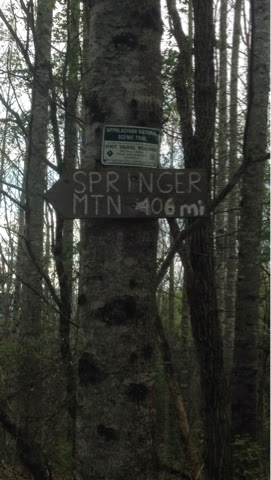 At this point it started raining a little harder and Cherokee had caught up. He pointed out the side trail to the hostel was right there and mentioned pizza and ice cream again. Feeling tired, sore, and defeated I couldn't say no again. With the prospect of pizza and ice cream I walked a little faster to the hostel. Cyborg, Stealth Bomber, and Airlock were already there. We each got a pint of B&J ice cream and ate it all. We were also able to charge our phones and relax while the pizza cooked. Cyborg and Bomber headed out for another 6 miles, while Airlock, Cherokee, and I ate pizza. After consuming almost 2,000 calories, we decided we could push on for another couple of miles. It was getting late, but all we had to do was filter water and set up camp. It was a good decision for me to stop. I was able to get off of my feet for an hour and a half, and I only fell a little short of my 17 mile goal for the day.
Tomorrow I'll stop in Hampton, TN for a quick resupply. I should be back on the trail after an hour, so I should still get some decent miles in. Hopefully my foot and energy level will cooperate until Damascus. I'll probably take a zero there, if not I'll take a decent Nero, like I did in Erwin.
Damascus has three really good outfitters, so I'm hoping to figure out this shoe problem for good. I also need to get new socks, but Darn Tough should replace them for free.
Tonight is the warmest night I've had while on the trail. I'm still in shorts and lying on top of my sleeping bag. Usually I have on my thermals, puffy jacket, rain coat, head buff, and thermal cap. I guess this is a small taste of what's to come this summer. I still can't believe my luck with the weather lately. After the Smokies(or as we call them:The Soakies), I got used to walking in the rain and mud. Yesterday, I had rain for 30 minutes and today for 10 minutes. I hope I don't get too spoiled by the nice weather.
"The only way of finding the limits of the possible is by going beyond them into the impossible." -Arthur C. Clarke
Posted by Yoda at 7:17 PM