Ok, ok, I'll finally admit it; I have two huge blisters. I've been calling them hot spots because I've been in denial (and maybe wishful thinking), but I can't deny it any longer. This is my second longest day of hiking and most of it was agony. I've got 26 miles until we get to Damascus and I dread taking one more step since my feet hurt so much. As long as I keep moving it's not so bad, but once I stop and try to get going again it's pretty bad. I'm tired of talking about my feet and I'm sure you're sick of hearing me talk about my feet, so I'll move on.
I broke my record this morning. I was up by six and out of camp at 6:55. It's amazing how many miles I can knock out by getting started so early. I'll admit that I had a little bit of help. I told Cherokee and Airlock they could get me up in the morning, so I woke up to Cherokee gently shaking my hammock. I'll try to get myself up tomorrow morning, but those of you who know me, know there is a small chance of success of that. 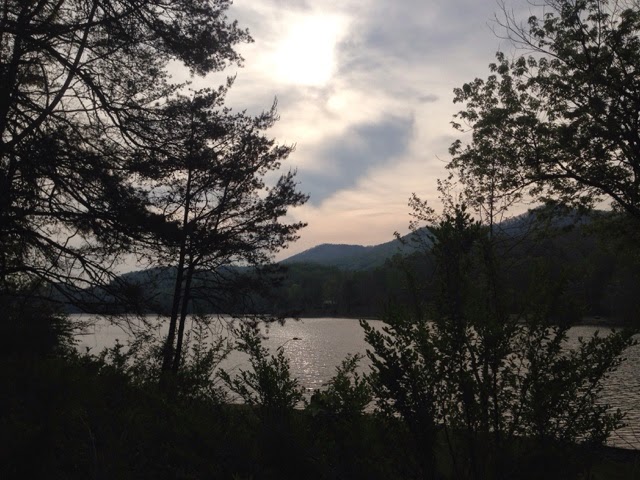 Early Morning View of Watauga Lake
After hiking only a few miles I arrived at Watauga Lake. The trail kept us really close to the perimeter of the lake. We walked alongside of it for a few miles. It would have been a spectacular place to camp, but the area is closed to hikers for camping due to bear activity. 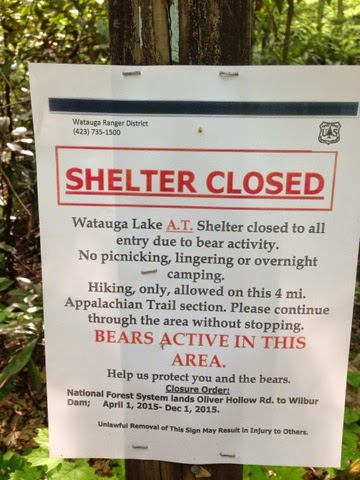 Didn't Even See A Single Sign Of Bear
It was a very pleasant hike through that area. We walked over the dam, but it wasn't a very impressive dam. Then it was a long, poorly marked, road walk for over half a mile. View From the Dam
I started the morning on one of the mountains shown above. It was neat seeing the lake from so many different angles and ridgelines. 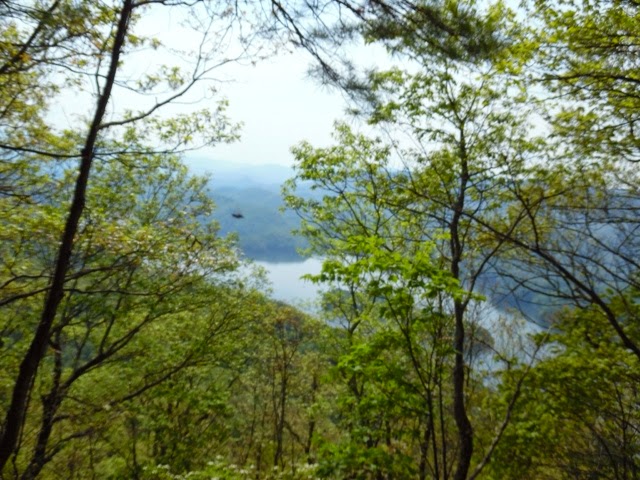 Same Lake Different Mountain
After leaving the road and reentering the woods, it was mostly uphill walking for a while. The temperature and humidity was rising as well. I'm beginning to have to carry more water since it's getting so warm out. I probably drank 5 liters of water this afternoon. Since we haven't had much significant rain fall lately (not complaining about that) our water sources have become difficult. They are still there, but not flowing very strongly, that makes it more time consuming to filter it.
By 12:30, we had already hiked 12 miles. We were all feeling really good and decided to change our plans for camping tonight. Instead of doing 16 miles, we decided to shoot for 19.3. I had plenty of time to make it there and my mom and dad were finally within cell phone range. I took a long break and called them. We talked briefly the other day, but it was nice to chat again today. After that the rest of the hike was dodging small amounts of rain and trying to focus on something other than my feet. I played an audiobook for the first time in weeks. It was a great distraction. Before I knew it I had arrived at the shelter. There are about 14 other people camped here tonight. For some reason, Tennessee, doesn't have privys or bear cables at their shelters, so it's unusual for so many people to camp next to one. I'm hoping for a quieter night tonight. My blog is done early and I'm pretty tired. Looking forward to a good day tomorrow. I'm going to wake up and my feet are going to be 1,000,000 times better (a girl can dream right).
If you're interested in another perspective you can check out Airlock's trail journal at http://www.trailjournals.com/entry.cfm?id=492659 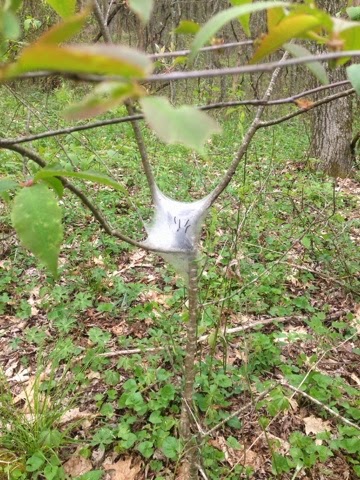 Cool looking Spider Web Cocoon thing
"If you set a goal for yourself and are able to achieve it, you have won your race. Your goal can be to come in first, to improve your performance, or just finish the race. It's up to you"
Dave Scott - Six Time Ironman World Champion
Posted by Yoda at 6:40 PM