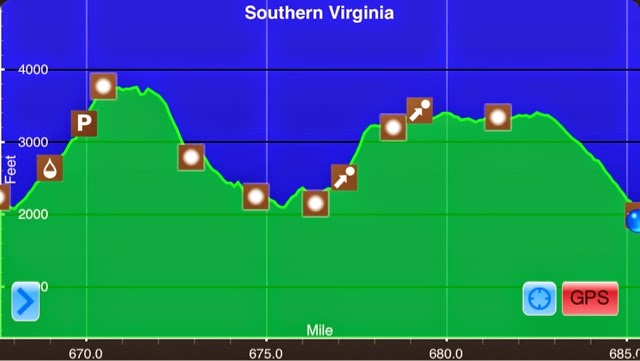 Today was a very physically demanding day!  Once again I didn't get much sleep. It was warmer than the night before, but still cold. I was slow getting out of bed this morning and didn't leave camp until almost 8:00. We had a very tough, long climb to start the morning so at least I warmed up quickly. Not only was the first uphill long and steep, but it was also very rocky. At least we got a view after putting in so much effort. 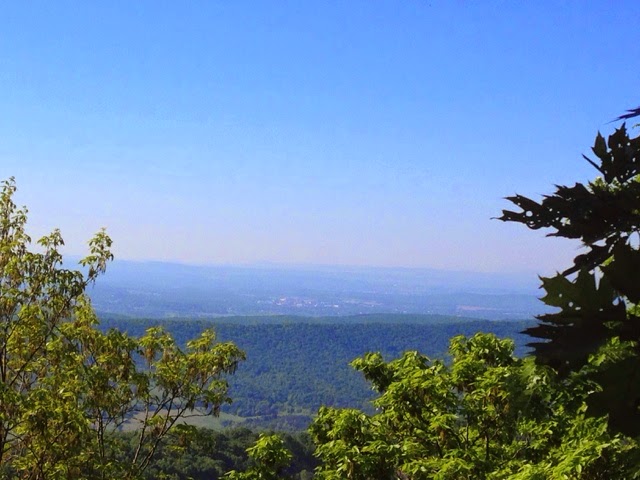 Kelly Knob with a view into Blacksburg where Virginia Tech is located.
With it being Memorial Day weekend we saw a lot of day hikers today. I think a lot of them were college students from Virginia Tech.
After Kelly Knob the trail went straight down over rocks. It is never fun going down over the rocks, but it was over quickly. I stopped in at the shelter to sign the register and to eat a snickers bar then I was off again.
The next section of trail took us through farm lands. Lots of open pastures with some pretty nice views. After such a cold night, the day was very warm with very few water sources. 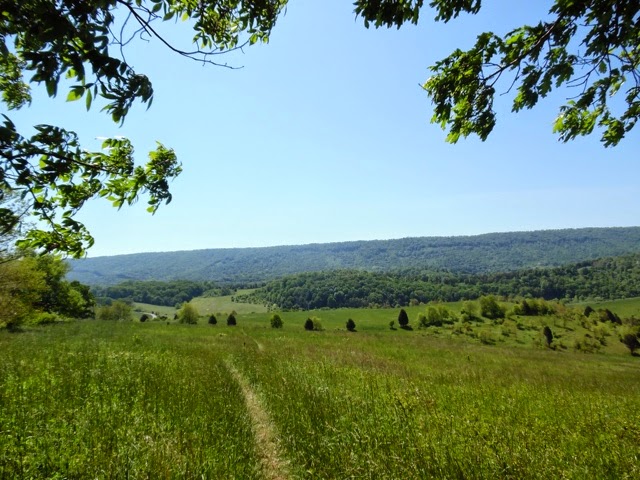 View from the pasture. I would climb over the mountain in the background in a few miles.
After crossing through the pastures we came upon Keffer Oak. The second oldest oak tree on the AT. It's over 18' around and over 300 years old. I was worried that I would miss seeing it, but it is so much larger than everything else around there was little chance of that happening. 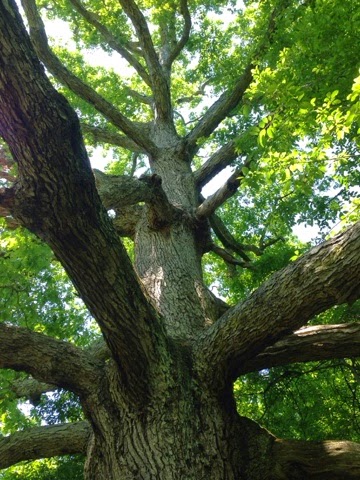 Keffer Oak
Airlock and I had planned on eating lunch here, but that didn't work out. There were cow patties all around and a dead deer within 50 yards. We pushed on a little further and found a nice spot in the shade to eat our lunch.
After lunch we had one more steep uphill climb. It was only half a mile long, but it was very steep and difficult. My energy level was starting to rapidly decrease so I had a snack and put on my headphones. Shortly after that the guidebook said I would have a view, it was very understated. The "ledges" were magnificent. A boulder lined ledge offered views across the appalachian mountain range. 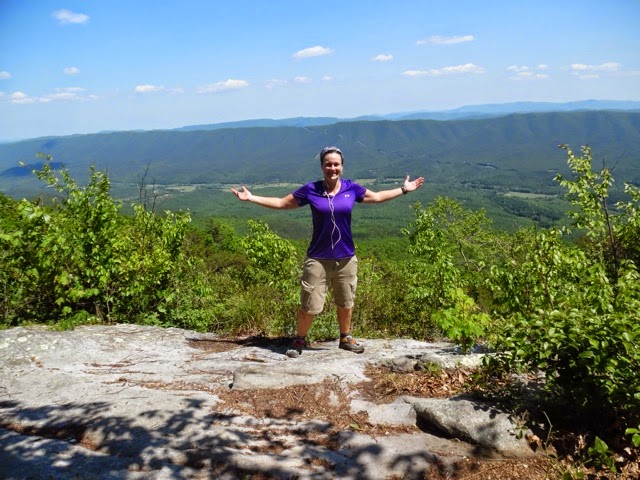 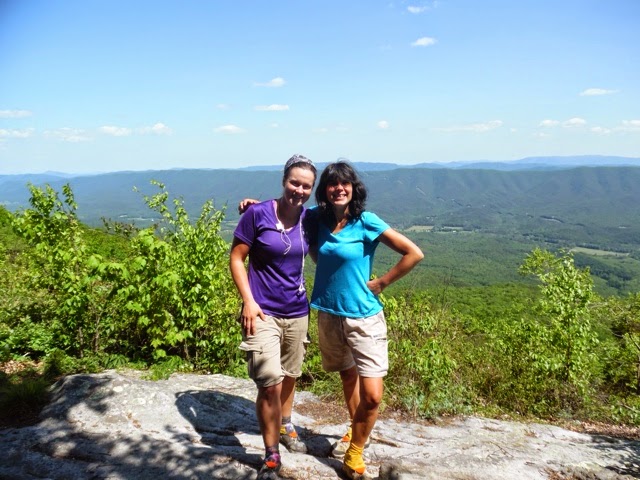 Me and Airlock
We sat here for a long time and enjoyed the view. Eventually Shimmy joined us. The next section of trail followed the ledges for almost a mile. The trail was difficult, but with such great views I didn't mind. 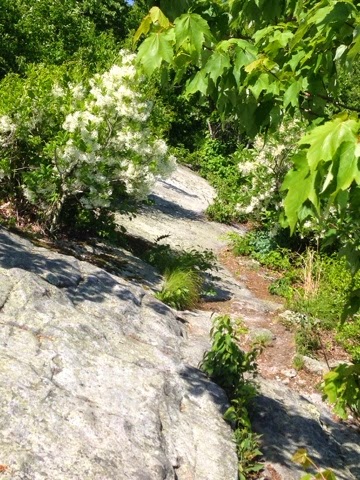 Steep rocks along side of a mountain made up the trail through here. One wrong step and you could tumble off the cliff. 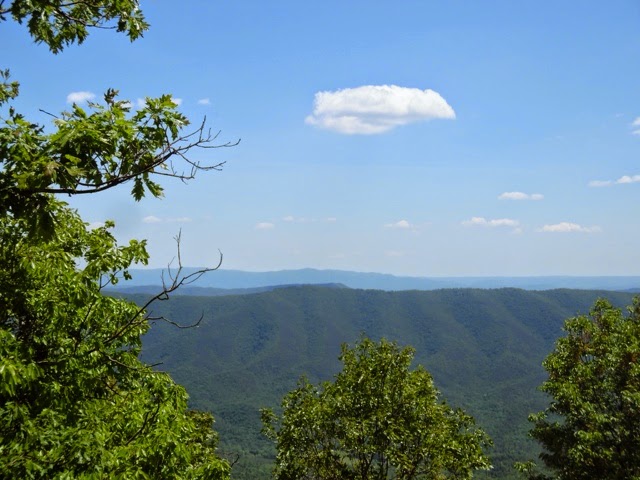 One last look at the view
After walking along the ledge I eventually came to the sign for the Eastern Continental Divide. It marks where the waters on the west side of Sinking Creek Mt. flow into the Mississippi River then into the Gulf of Mexico, while the east side flow into the James River and the Atlantic Ocean. 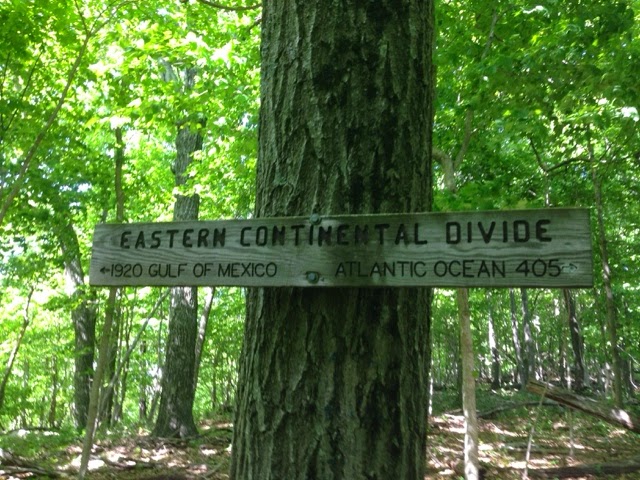 Eastern Continential Divide
The rest of the hike was a very tough 2.5 mile decent over, you guessed it, more rocks. By the time I made it to the shelter my feet and legs were on fire. The shelter quickly filled up and looks like a tent city. I saved a spot for Airlock and I. I then set about doing my camp chores. Somehow it has gotten really late(10:00) and tomorrow is going to be a really long day. If our plan works out we will see Dragon's Tooth and break the 700 mile mark. The weather is warming up again and I should be able to stay warm tonight.
"As long as I retain my feeling and my passion for Nature, I can partly soften or subdue my other passions and resist or endure those of others." -Lord Byron
Posted by Yoda at 8:04 AM