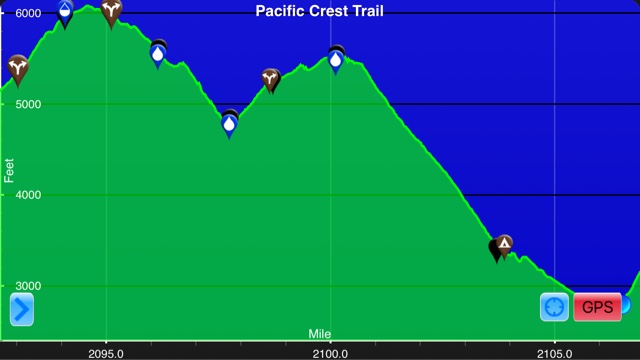 Total up/down: +1,187/-4,372 feet
I have never been so grateful to sleep indoors. The rain continued for most of the night and with the windchill it was below freezing. I, however, was warm and toasty in the worlds softest bed. The only problem was that the bed was too soft. I guess I'm finally getting used to sleeping on the ground. It only took 2,100 miles. I still miss my hammock each and every day. It was also a little strange sleeping in such a tiny room with five other people. I haven't shared a room with so many people since Cajon Pass, when Evac, U-Turn, Hawkeye, Spaceman, and I shared a room. That seems like forever ago. In an unspoken agreement everyone slept in this morning. Or maybe they were all up early. I seem to be one of the early risers on this trail. On a daily basis I pass people still asleep in their tents after nine o'clock. Regardless if they slept in or were up early, I slept in. I was up at six thirty, but stayed quiet until everyone began to stir around seven. The sky cleared, momentarily, and we could see Mt. Jefferson peeking above the clouds. We piled our dirty laundry together and Mozart took it to the laundry room. I was told that there would be free coffee in the second floor lobby, so I went in search of that.
As I poured myself a cup I looked out the window and could clearly see Mt. Hood. It is a very impressive mountain. I took my coffee outside, found a comfy chair, and enjoyed the cool(freezing) morning air. 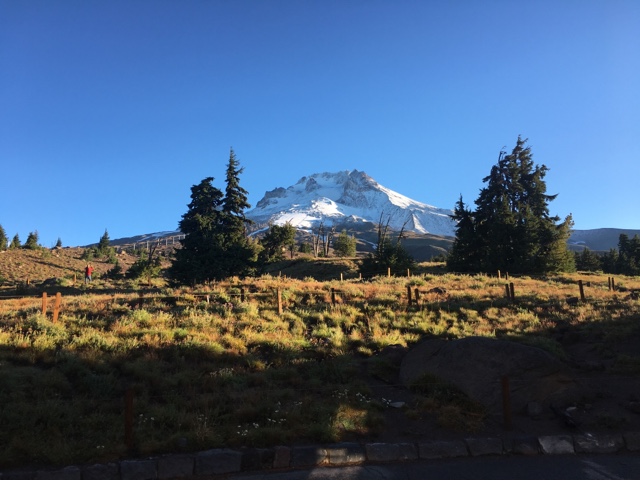 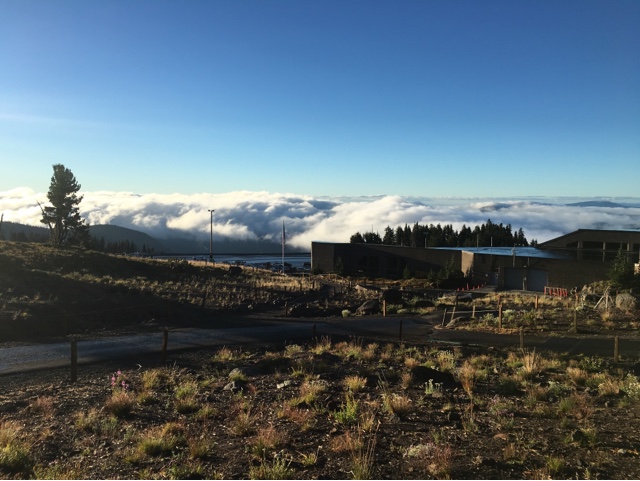 Impressive cloud/fog coverage of Mt. Jefferson
I was really hopeful for better weather today, but within twenty minutes the clouds rolled in and conditions worsened. I had already decided to only hike a half day. I'm only fifty miles from Cascade Locks and I don't want to get there over Labor Day weekend. I'm actually going to take my time getting there. The plan is to hike ten miles today, twenty five tomorrow, and fifteen on Monday. I'm going to take a zero day on Tuesday. Cascade Locks marks the end of Oregon and the beginning of the end, Washington.
Timberline Lodge is well known amongst the hiking community for their breakfast buffet. Once I was too cold to sit outside any longer I went inside to feast. I learned my lesson about overeating and them hiking after the Big Lake Youth Camp fiasco. I tried really hard to restrain myself. I had scrambled eggs, biscuits and gravy, sausage links, apple fritter pancakes, ham, croissants, fruit, and yogurt. I skipped the Belgian waffles. When I see it written out, that sounds like a lot of food. I was full, but not stuffed.
After breakfast I went back to the room to pack up. Starburst and Hamburglar had already left. With only four people left in the room it was easier to move around in the tiny space. Once I had finished packing I went back to the lobby. I had several things I needed to get done. I downloaded a new audiobook, I paid a few bills, and I filled out some paperwork for my job in Telluride. By the time I accomplished all of my chores it was almost two o'clock. I had planned on leaving by one. 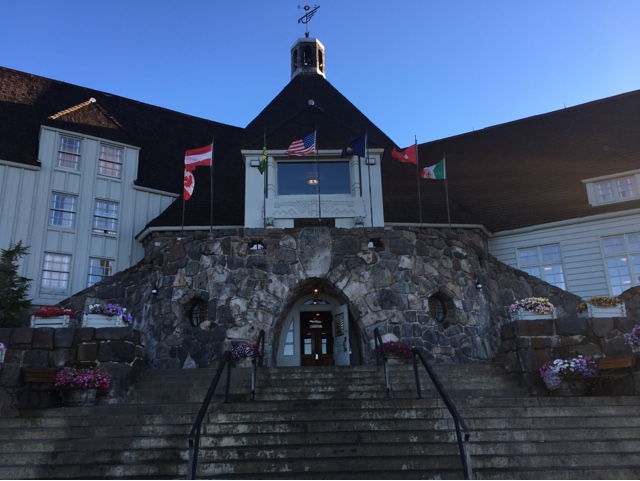 Timberline Lodge. They used the exterior of the Lodge in the movie, The Shining
By the time I was finally ready to leave the weather had gotten worse. The temperature dropped to forty degrees, it started raining again, and a wet fog had rolled in. You could no longer see Mt. Hood. I was surprised to see that the ski lifts were running. People were skiing and snowboarding. The resort still had four or five runs operating. I asked one of the skiers about it and they said that the lifts run all summer long. That is pretty cool. 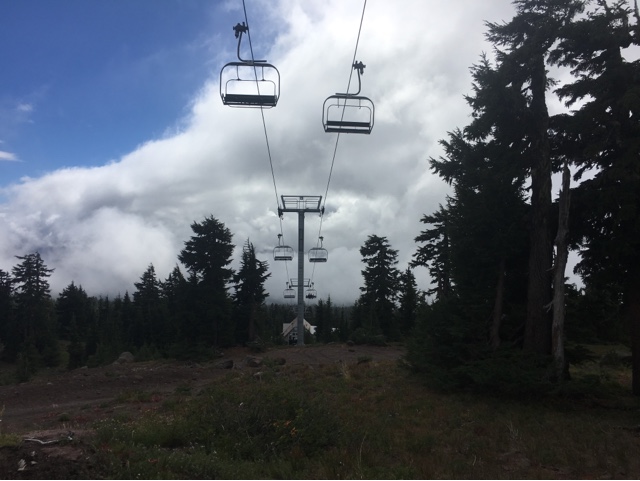 Small amount of clear sky
The hike out of the lodge was pretty easy and there were a lot of day hikers out and about. I was pleasantly surprised to see so many people braving the elements. 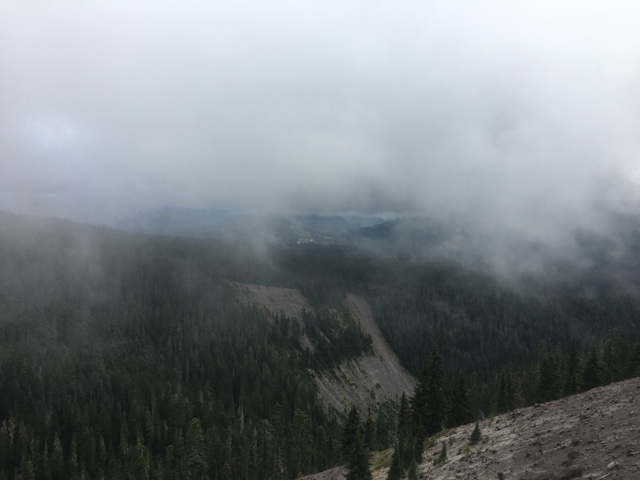 Mt. Hood
I couldn't decide if it was better to hike in my rain jacket or leave it off. It wasn't pouring, there was just a light drizzle. The trail kept going up and down, which made my decision harder. I was overheating on the ups and chilled on the downs. I decided that it was better to try to stay dry, so I hiked in my rain jacket. In no time at all I crossed the 2,100 mile marker. It was very unimpressive. The rain had temporarily stopped so I took the time to make a better 2,100 sign. 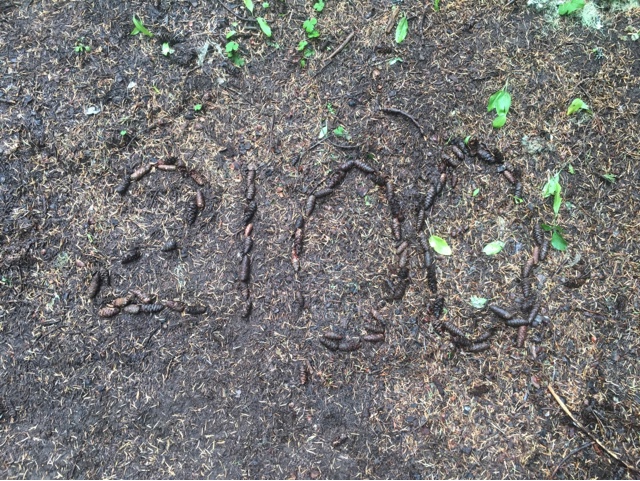 I'm not trying to be arrogant, but I think mine is better
Over the next several miles the trail dropped a few thousand feet of elevation and I was able to warm up. It is amazing how much of a temperature difference a few thousand feet can make. This section of trail is how I imagined Oregon to look. It was very green with tons of moss. The world seemed like it got much quieter the farther down I dropped. 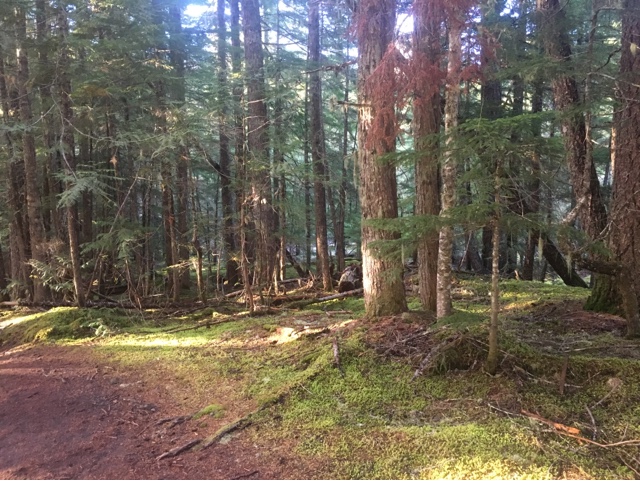 How I imagined Oregon to look
Since I'm not in a hurry for this section I had time for a side trip to Ramona Falls. It was only half a mile off of the trail and it was well worth the effort. Ramona Falls reminded me of a tiny version of Amicicola State Park in Georgia. 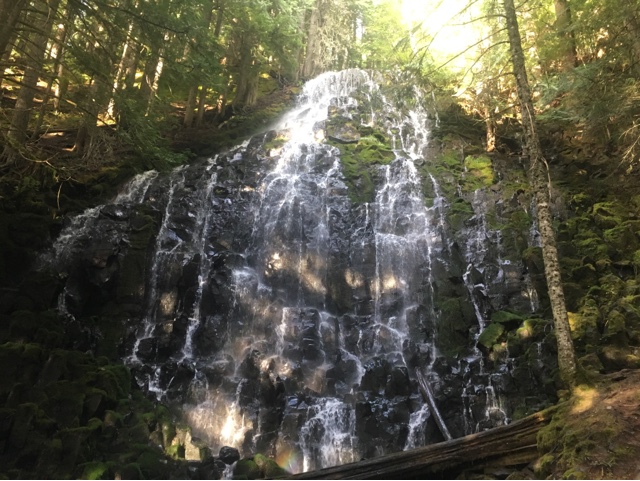 Ramona Falls
I backtracked to the pct instead of taking a side trail. The side trail rejoined the pct 2 miles from where I left it. I don't miss trail miles, even though it would have made things easier. I don't say this because I think I'm better than other hikers, or because I'm arrogant, or because I have too much pride. I am just pointing out that there is more than one way to skin a cat. The two trail miles that I could have skipped very really cool. Maybe the side trail was better, but I like hiking the pct. 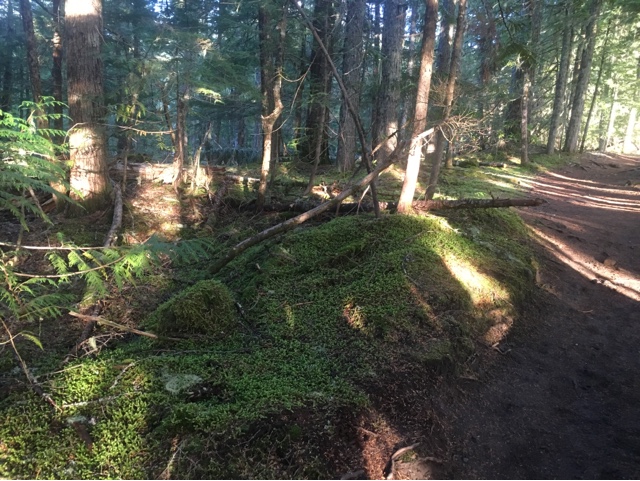 More mossy trail
I only had one more obstacle to clear before making it into camp. I definitely didn't expect to have so many large stream crossings in Oregon. I thought that only happened in the Sierra. At least this was an easy one. 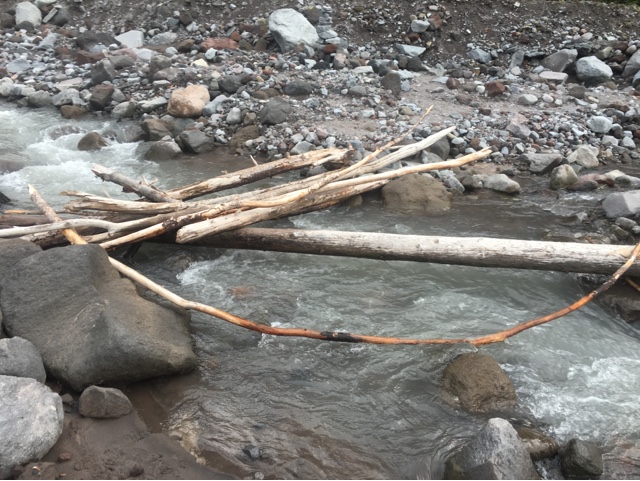 Glacier runoff from Mt. Hood
I stopped to set up camp before seven o'clock. It was nice to have a lazy day. I decided to camp at a lower elevation. Just after where I stopped the trail went up almost two thousand feet. It wasn't exactly warm where I was at, but it would be warmer down there. If I remember correctly, for every 1,000 feet of elevation gained the temperature goes down by three degrees(or is it seven degrees?).
"You must not lose faith in humanity. Humanity is an ocean; if a few drops of the ocean are dirty, the ocean does not become dirty."
- Mahatma Gandhi
Posted by Yoda at 10:02 AM