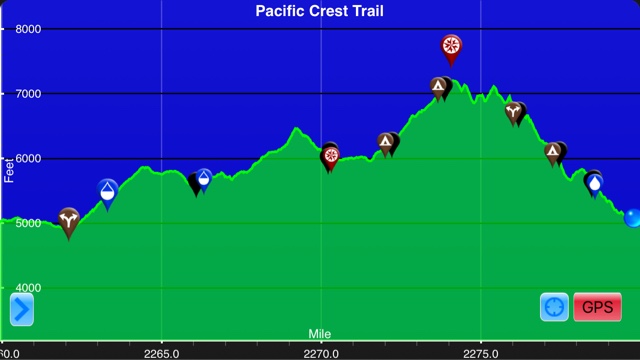 Total up/down: +4,178/-4,137
I was completely unprepared for what today had in store for me. I have gotten so used to walking in the woods that I forgot how different the PCT is from the AT. Today was a stark reminder of how different the two trails are. Once again it was really cold when I woke up. I packed up as quickly as I could. I just wanted to get moving so that I could warm up. My gloves are completely worthless. They are so tight that they cut off blood flow to my fingers causing them to be even colder. I quickly decided that I would be better off not wearing them. When I began hiking I knew that I would hike across something called The Knifes Edge today. I was hoping that it would be as cool as the Knifes Edge of Mt. Katahdin and I was not disappointed.
The first couple of miles today were more of the same, I hiked through the forest with zero views. The only difference between the last few days was the wind had increased significantly. I hiked as fast as I could hoping to make it out of the shade and into the sun. 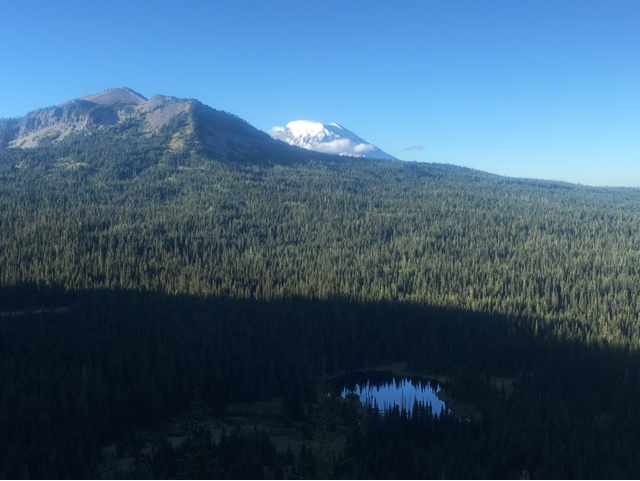 I'm in the shade, Mt. Adams is bathed by the sun
It took several hours before I made it into the sun, but to my dismay it wasn't much warmer. Once I was out into the open I lost the natural windbreak of the trees. I found that I didn't mind the cold as much as I should have. When I popped out from the trees it was like I had magically been transported back to the Sierra. Goat Rocks Wilderness is amazing. I had wide open views of the Cascades. I knew that today was going to be slow going. For once I could care less about making miles. I was looking forward to meandering along the trail. 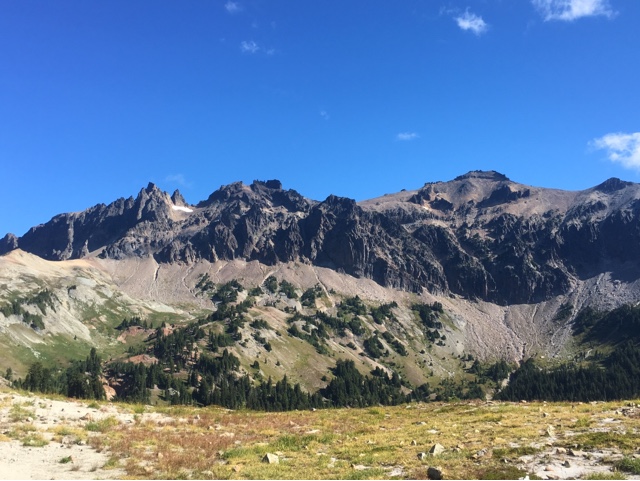 Beginning of epicness
I spent a few miles walking through Yakima tribal land. It was clearly marked territory. I walked along a ridge for a few miles. The wind was brutal and punishing. I spent a lot of that time stopping to put on layers, only to have to stop to take them off again when I began to sweat. Usually this irritates me, but today I welcomed the brief breaks. It gave me a chance to appreciate the beauty surrounding me. 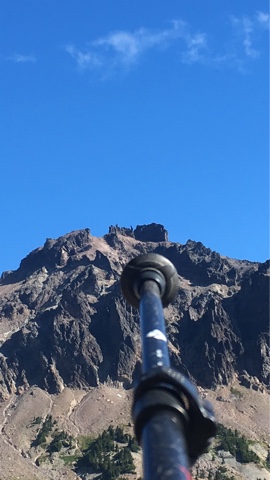 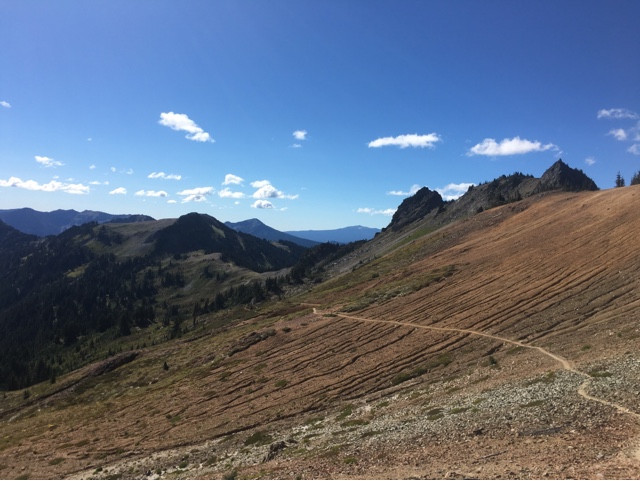 Exposed windy section through tribal lands
I kept expecting to drop back into the viewless forest at any moment. I was pleasantly surprised when that never happened. I was hoping to find a nice spot in the sun, but out of the wind so I could eat second breakfast. I finally found a suitable spot next to a cascading mountain stream. As the day progressed I really felt like I was back in the Sierras. The day kept getting better and better. 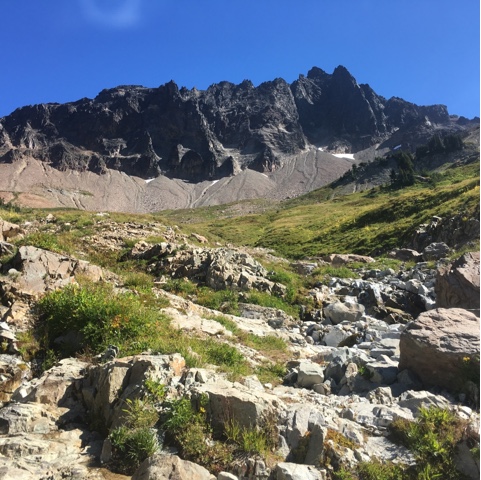 Pure snowmelt fed stream
After I had second breakfast the trail gradually climbed up to almost 7,500' of elevation. It was spread out over five miles and it took me forever to make it to the top. Every time I looked up I was blown away by the scenery. The higher I climbed the colder it became. The wind was also more pronounced. I must have taken twenty pictures on my way up. I kept getting views of Mt. Adams, Saint Helens, and Mt. Rainier. Today might have even been better than the Sierras. These peaks stand alone which allowed for a greater contrast. The high Sierra ranges that I hiked through had high peak after high peak. 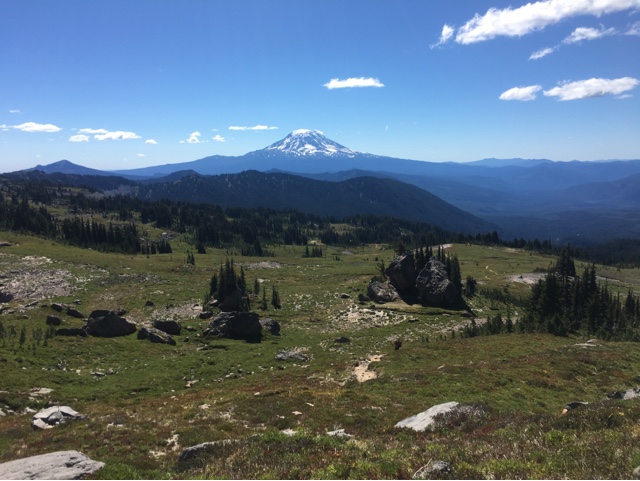 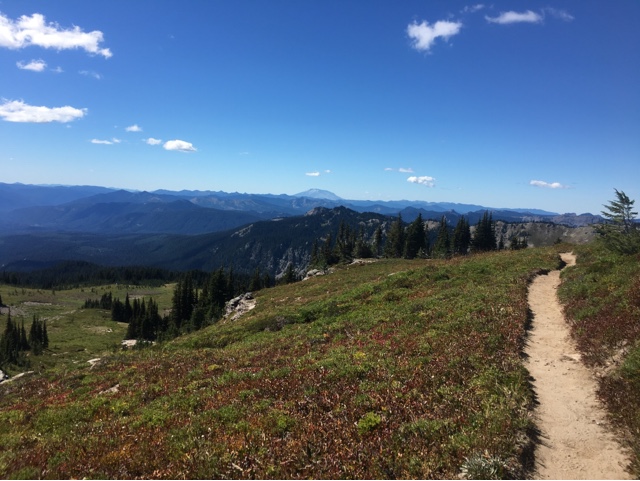 Mount Rainier
The climb that allowed me these great views was slowly taking me to the summit of Old Snowy Mountain. To bag the peak of Old Snowy involved an alternate trail. This alternate eventually rejoined the pct along the Knifes Edge. This is one of the rare cases where there is a hiker pct route vs. an equestrian route. I followed the hiker route up to Old Snowy, then I did the summit trail, before rejoin the pct. Old Snowy was around 7,600 feet of elevation. I haven't been this high up since N. California. The view was incredible. 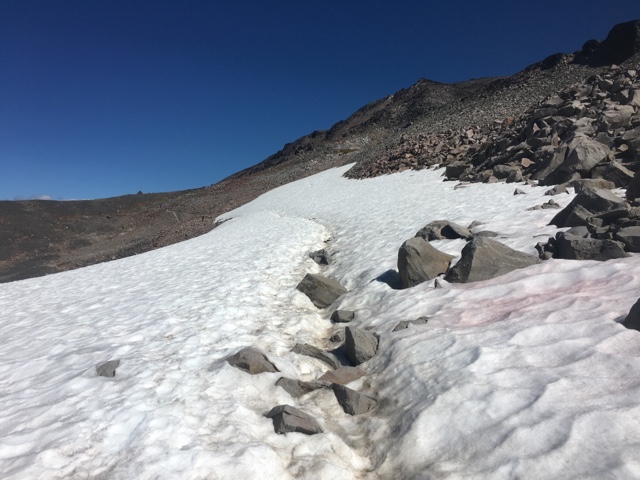 Snowfield on the way up to the peak 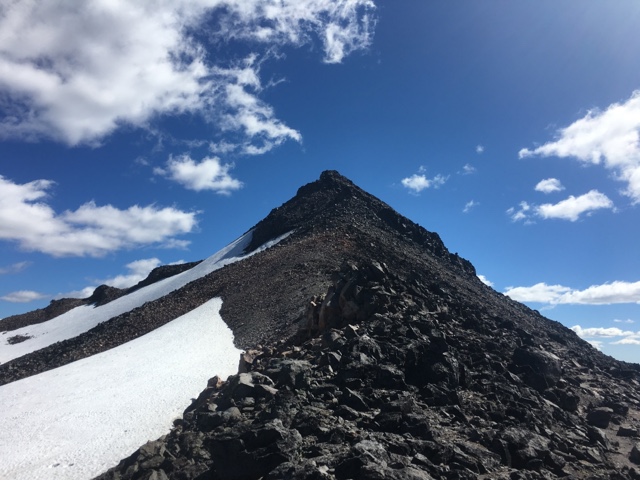 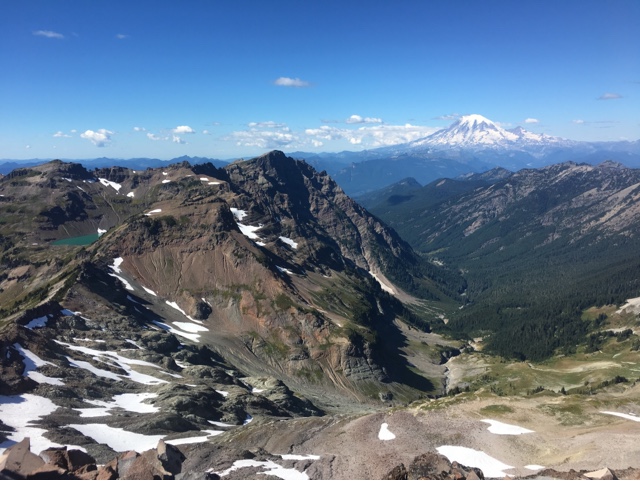 Pure adrenaline view. Rainier and alpine lake in the distance
The trail down from Old Snowy marks the beginning of the Knifes Edge. Before I began this trek I would have been absolutely terrified of hiking this section. I can't even describe how terrified I would have been. Probably crapping in my pants terrified. Today I was as cool as a cucumber. I wasn't nervous at all. I marveled over how far I have come on this trail. The sides of the path were crumbling away underneath my feet and I wasn't bothered at all. Even the twenty miles per hour winds didn't make me nervous. 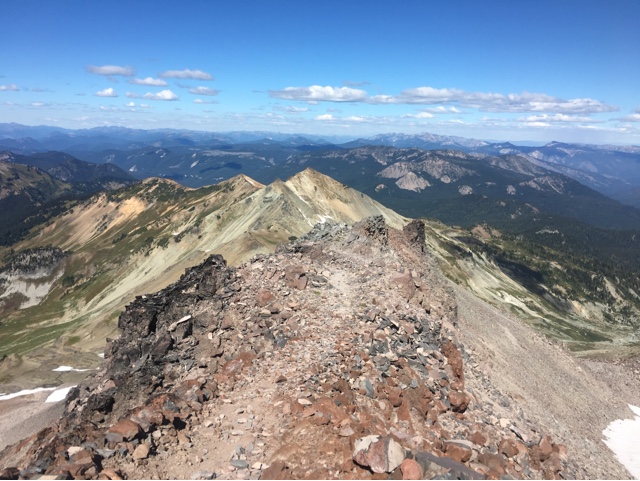 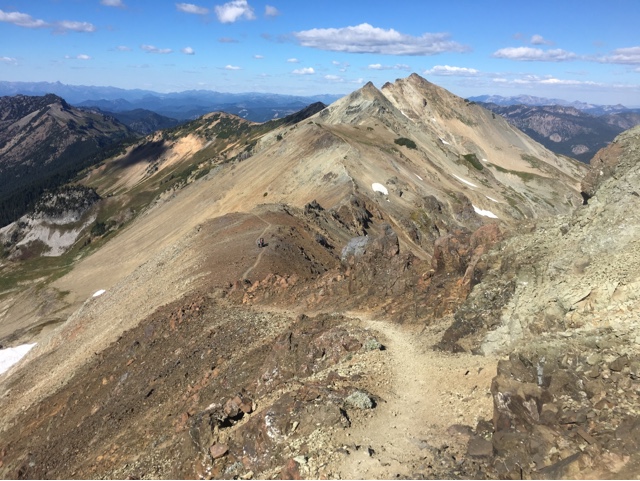 If you look closely you can see the trail 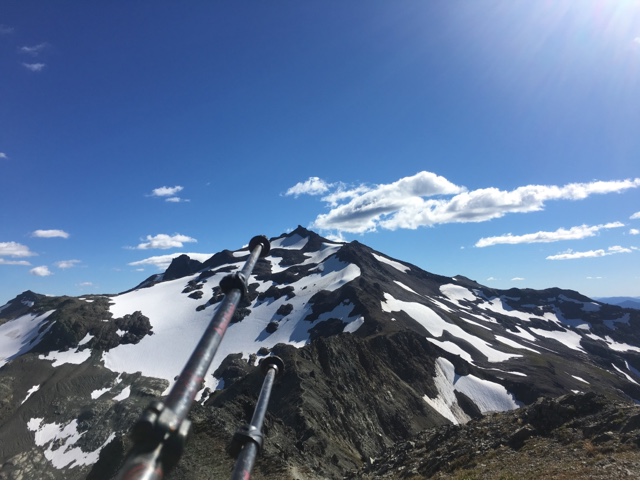 Pointing out where I started from 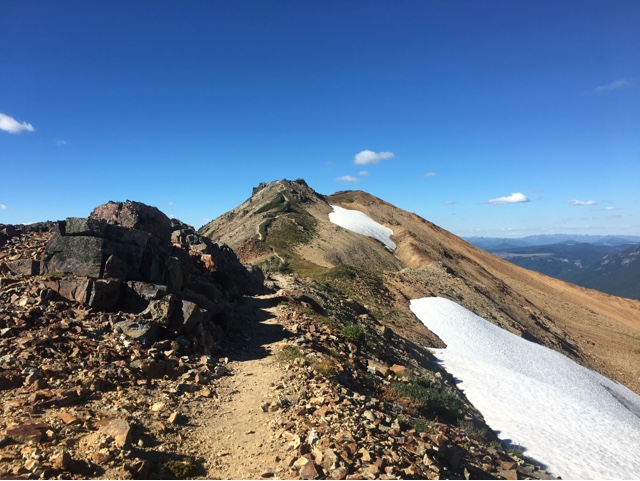 Can you see where the trail goes 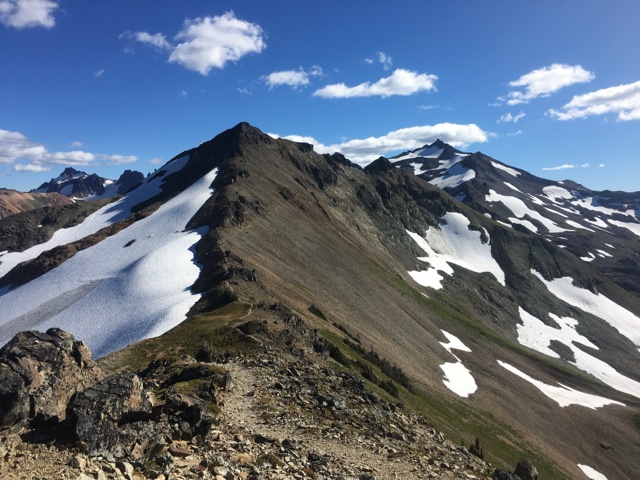 I walked the peaks of this range
It took me all day to hike nineteen miles. I barely made it to camp before dark. I am completely exhausted, but one hundred percent exhilarated. I spent most of the day being blown around by the wind on top of a razors edge with sheer drop offs on both sides of me. I was freezing cold and totally in my element. I still can't believe that I never had a freak out moment. Yay for personal growth! 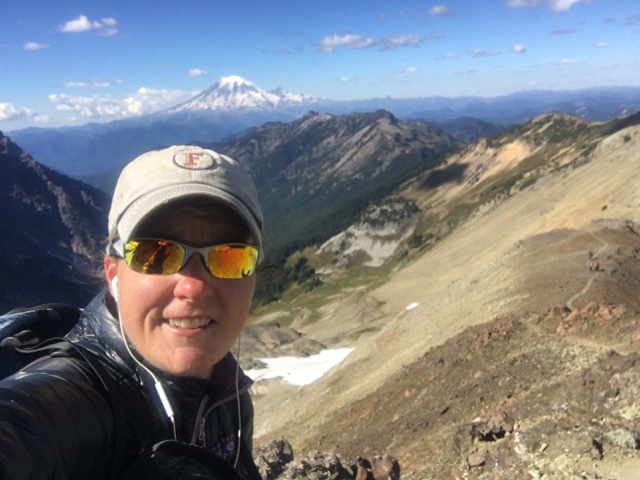 I think Rainier is more impressive that Mt. Whitney
The coming and going of the seasons give us more than the springtimes, summers, autumns, and winters of our lives. It reflects the coming and going of the circumstances of our lives like the glassy surface of a pond that shows our faces radiant with joy or contorted with pain.
- Gary Zukav
Posted by Yoda at 11:00 AM