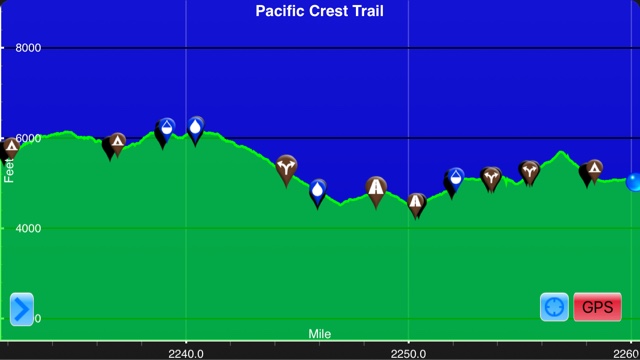 Total up/down: +3,097/-3,696 feet
It is amazing to me how quickly the temperature drops. As I was eating dinner last night I couldn't help but think that is was going to be a warmer evening. By the time I feel asleep it was close to freezing. Needless to say, but I was not too happy getting out of my sleeping bag this morning. I woke up on time, but I was slow getting ready to leave. My new gloves are horrible. They are way too small. I thought that I could make them work, but I was wrong. I think my hands were colder with them on, than without them. They were cutting off my circulation. Next time I get cell phone service I'll order a new pair and worry about returning these later. Even with the slow start I only left camp a few minutes late. I had a nice short climb to get my blood flowing and to help me warm up. The only problem was that I kept stopping to take pictures. I hiked around the west side of Mt. Adams. I was impressed by how much of its surface was covered by glaciers. 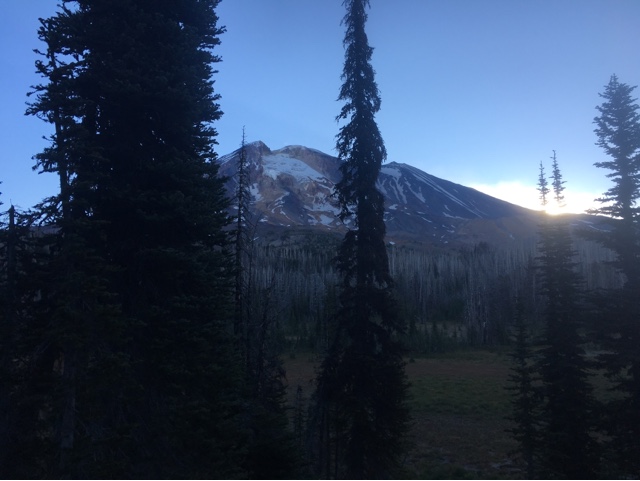 Sun starting to peak over Mt. Adams
For the first half of the day I had almost a constant view of the mountain. I think what I find most impressive about it, is the width. Mt. Adams doesn't have a large prominence, or peak, but it is very wide. The scope of it is very awe inspiring. As I hiked around the mountain  the fog began to roll in. I was at a high enough elevation that I felt like I was above the clouds. It made for a dramatic landscape. Most of the fog was concentrated to the west of me. I could just barely make out a mountain peaking above the fog. I was stoked, when upon closer inspection, I noticed that it was Mount Saint Helens. Then I looked to the right and I saw Mount Rainier for the first time. 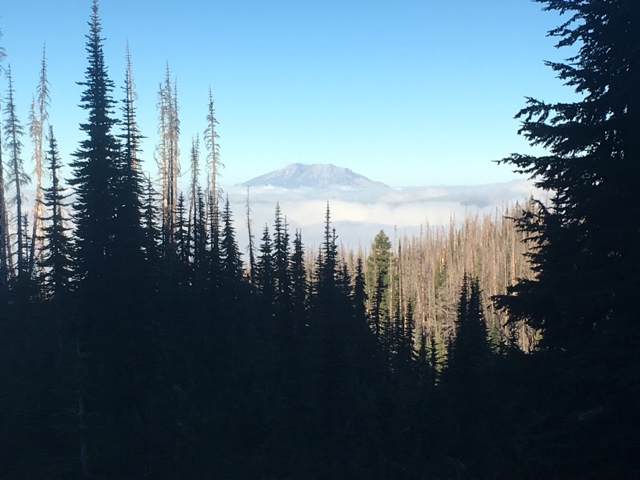 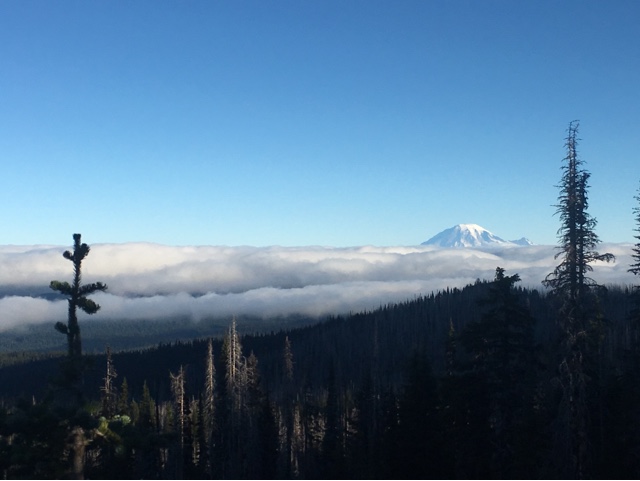 Helens on the left...Rainier on the right
At the same time I could see Mt. Saint Helens and Mt. Rainier, I could also see the glaciers of Mt. Adams. I decided that this would be a good place to stop for second breakfast. 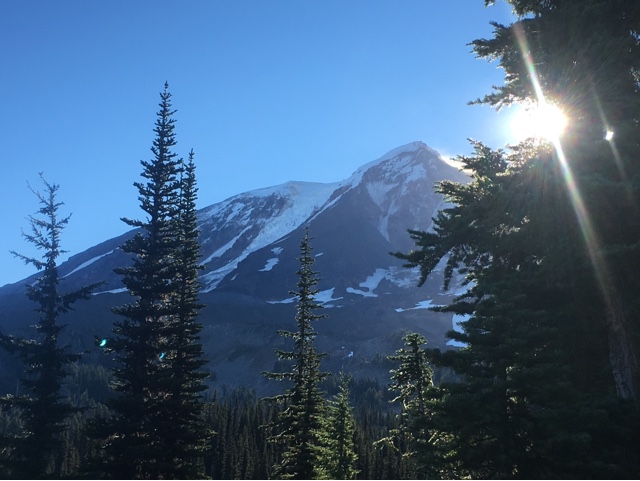 Small glacier on Adams
I would have liked to take a longer break, but I was beginning to cool down too much. The temperature dictated much of my day. It was supposed to be in the eighties today, but with the elevation and the fact that I spent most of the day in the shade, it never felt that warm. Every time I thought about stopping to take my pants off I would get chilly. I ended up hiking in my pants all day long.
I was surrounded by streams and lakes all day today. It was nice not having to worry about water. I could have gotten away without not carrying any and just gone source to source, but I prefer to always carry some. It has more to do with not wanting to constantly stop. I fill up a liter and when that runs out then I stop. Some of the sources were glacier fed and I have discovered that glacier fed streams are very silty. The water tastes ok, but has a milky white appearance. 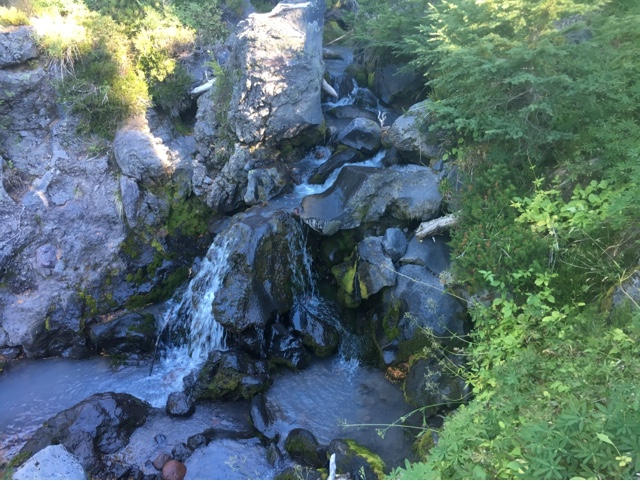 Notice the milky color
I had one major stream crossing today, but because of a well placed log it was easy to get across. I bet during the summer it was much more difficult to get across. 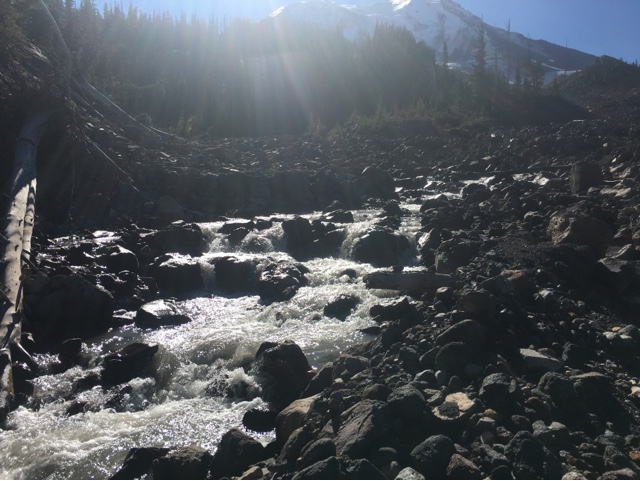 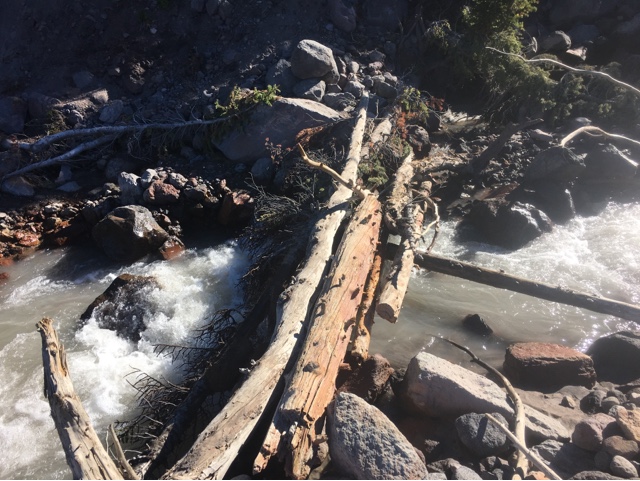 Well placed log
Shortly after crossing the stream I had my last view of Mt. Adams for the day. I spent the rest of the afternoon hiking through the forest. There really wasn't a whole lot to look at. 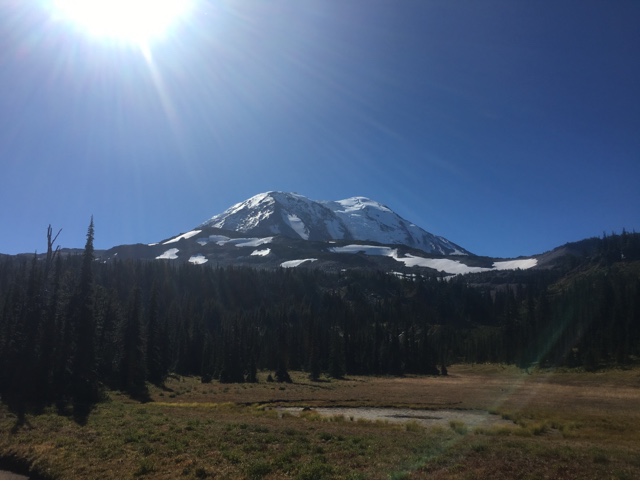 Last view of Adams
The most notable thing I noticed today was the change of seasons. It has happened so fast. Just last week I was uncomfortably hot, now the days are becoming cooler. The change of color in the foliage surrounding me has changed just as quickly. I'm noticing a lot more reds and purples in the shrubs covering the ground. It seems to have changed overnight, but I think it is just because I've been at a higher elevation for the last few days. 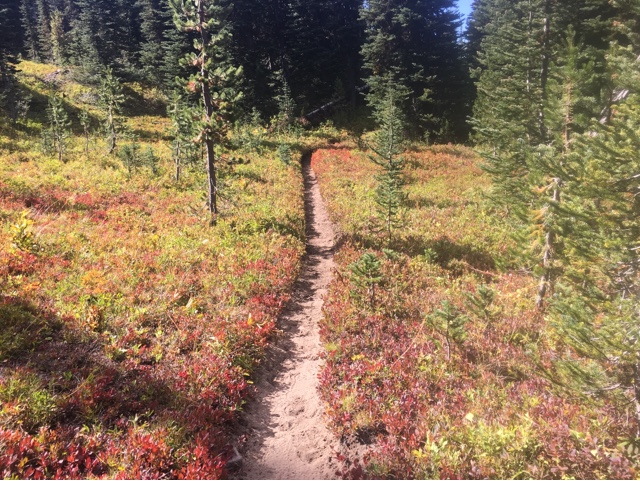 Fall is upon me
Up until today these little shrubs were full of ripe huckleberries, now they are bare or full of shriveled berries. I am reminded of the words of House Stark, "Winter is coming". I guess it will be a race to see if I can finish before winter sets in. Everyone I meet along the trail keeps telling me that the 15 day forcast calls for great weather. I just hope that extends to 20 days and I'll be all set.
I made it to my planned campsite at five o'clock. I just couldn't justify stopping so early in the day. Plus since it was next to a lake it was pretty cold. I decided to fill up on water and hike until six o'clock. There weren't any campsites listed on any of my maps for at least five miles, but on the PCT you can usually find something. Within twenty minutes I passed two other really appealing looking spots, but I kept going. Finally a little after six o'clock I found a flat spot in the middle of the woods. There was even a dead tree that was the perfect height to sit on while I cooked dinner. After flat ground the next thing I look for in a campsite is a good sitting log or rock. Tomorrow is going to be a great day. I get to hike over the Knifes Edge in Goat Rocks Wilderness. I didn't get a chance to hike the Knifes Edge of Mt. Katahdin, which I deeply regret. I'm hoping that this Knifes Edge is just as cool.
"The three great elemental sounds in nature are the sound of rain, the sound of wind in a primeval wood, and the sound of outer ocean on a beach."
- Henry Beston
Posted by Yoda at 11:06 AM