Day 126- More Waterfalls and Some R&R 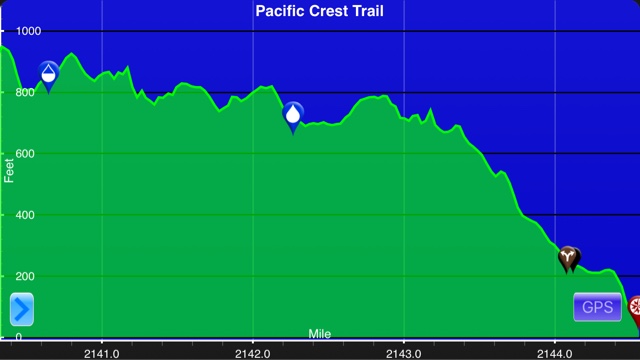 Total up/down: no idea
Today was a nice and easy day. I woke up and hit the trail by six-thirty, it was the earliest I have started in awhile. I was motivated to make it into Cascade Locks by ten o'clock. I didn't have to contend with much elevation change and it wasn't raining. All in all a great improvement over my last few mornings. I hiked over 4 Mile bridge, which was not 4 miles long. I naively thought it would be four miles, but it is just four miles from the start of the trailhead. 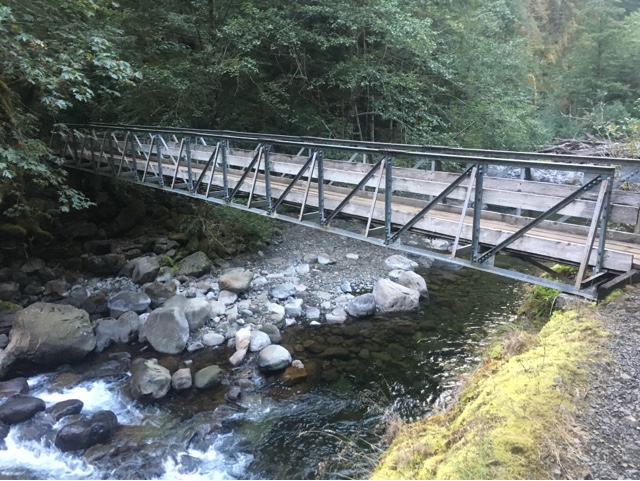 Misleading name
My next point of interest was Punchbowl Falls. When I arrived there it was blocked off by an iron cable. I could just barely see the falls. I decided to hop over the cable and scramble down so I could get a better picture. I think they have it roped off to keep people from cliff jumping. 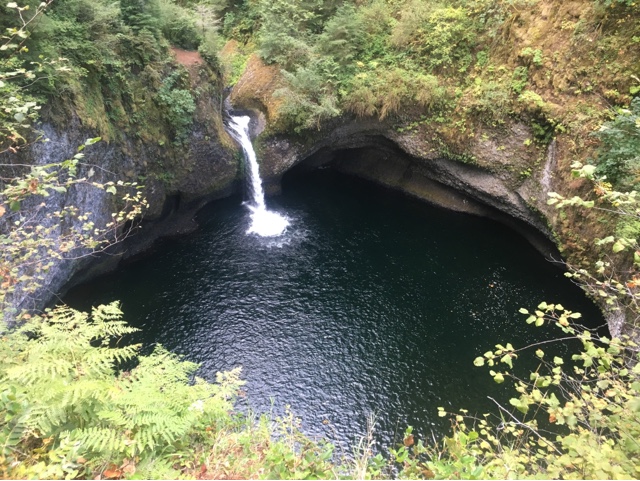 Punchbowl Falls
Just before reaching Punchbowl I came across a very damaged bridge. There was an easy way to cross a tiny stream so the bridge was not necessary. I thought it strange that they felt the need to post a sign warning hikers not to use the bridge. It was obviously a death trap. I can't imagine needing to warn people not to use it. 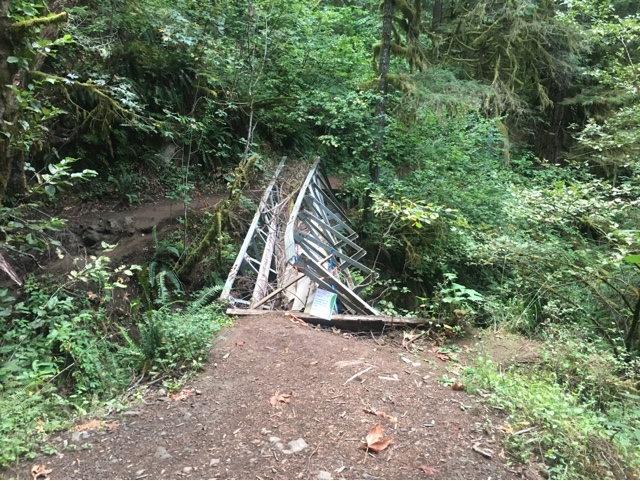 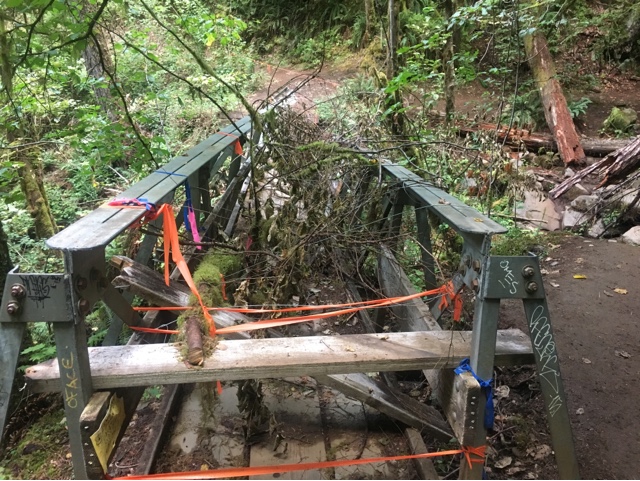 Not even tempted to use this bridge
There were a few more waterfalls located just off of the Eagle Creek trail. I felt like I had seen enough so I didn't take any of the side trails. There becomes a point where one waterfall looks like the next. I guess I have become a little jaded.
The last three miles of my day were spent walking on a road. Usually I dislike road walks, but this was different. Before I-84 was constructed, The Columbia Highway, was the main road around this region. Over the years it had fallen into disrepair, but now it is being rejuvenated as a hiking, cycling, and jogging destination. 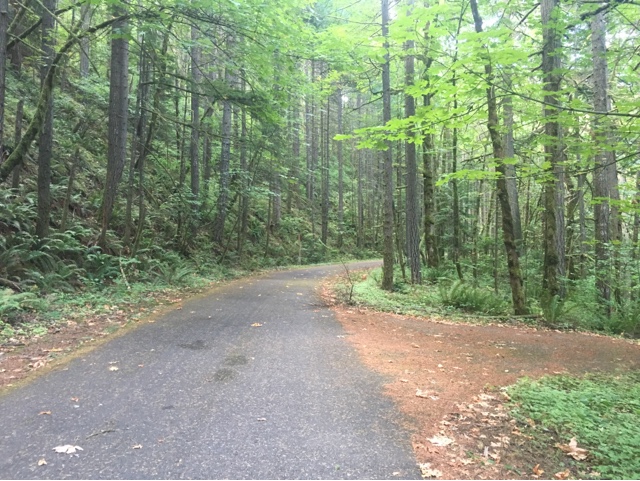 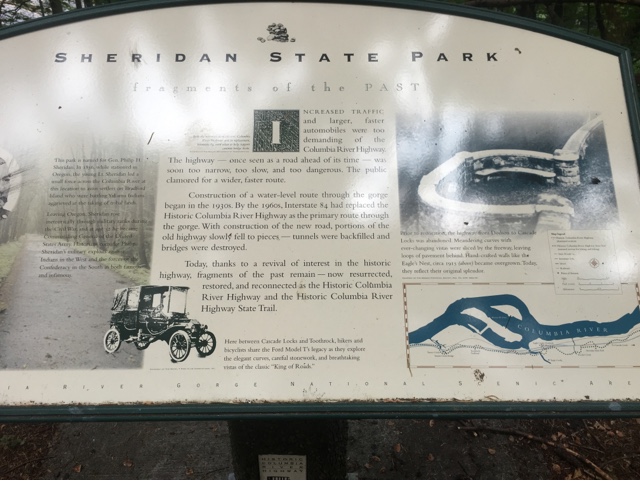 Historical Info
The historical scenic highway trail took me back to the official pct and the pct took my right through Cascade Locks. In fact it took me right to The Bridge of The Gods. It was an exciting moment, the end of Oregon and the start of Washington. I was tempted to walk across the bridge today so that I could officially start Washington, but the bridge doesn't have a pedestrian walkway. I only want to do that walk once.
I walked over to the grocery store instead and bought a quart of chocolate milk. Then I went to the hotel to see if I could check in early. I was in luck, my room was already cleaned and available. This was a stroke of luck because check in wasn't supposed to be until four o'clock. Getting into the room so early allowed me to accomplish my town chores much more efficiently. 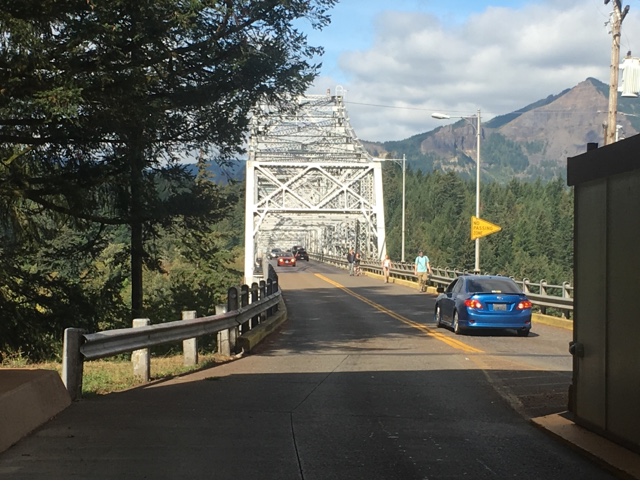 Bridge of the Gods
I made a grocery list, took a shower, went to lunch, and did my grocery shopping. I picked a very popular touristy place to have lunch. It was really just a shack, but the line was outrageously long. I took that as a good sign that the food would be good. 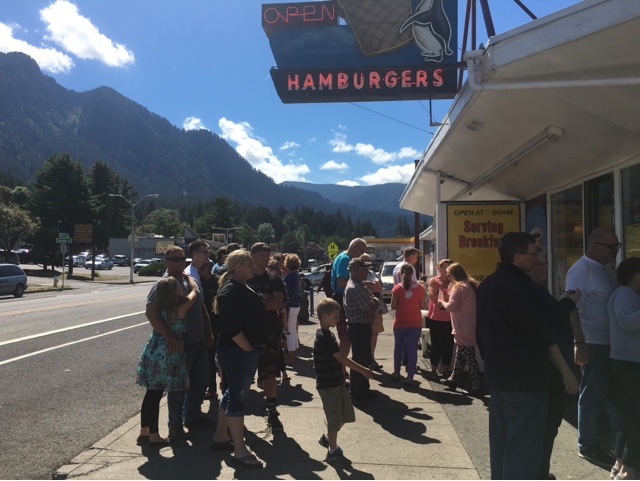 East Wind drive in
The food was good, but this was more of an ice cream paradise. I have never seen a soft serve ice cream cone piled so high. I got a double bacon cheeseburger, curly fries, and a milkshake. I chose peanut butter and butterscotch. It was a delightful combination. It tasted like a butterfingers candy bar. I took my lunch down to the river and enjoyed the afternoon. The sky was overcast, but it wasn't raining. 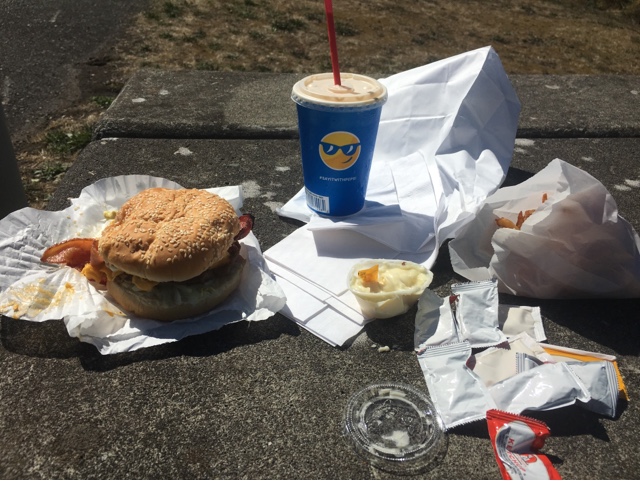 Lunch
I was absolutely stuffed after lunch, which meant that it was the perfect time to go to the market to resupply. I was able to find almost everything I needed. Unfortunately, they were out of the one thing that I desperately needed, canister fuel. I went back to the hotel to start my laundry, but I discovered that they had a hot tub. I enjoyed an ice cold beer while I soaked my sore muscles. It was perfect. Once laundry was done I took care of a few other chores and relaxed for a little bit. Eventually it was time for dinner. I went to Cascade Locks Ale House because rumor has it there is an amazing trail angel who works there. The pizza was really good and they had a great selection of local craft beers. Jules, the trail angel, offered to take me into the neighboring town of, Stevenson, tomorrow so I could pick up some fuel for my stove. What a generous person. While we were talking another hiker said he had an extra canister that was full and I could have it. Jackpot! Cascade Locks has been really hiker friendly and it was a great place to rest and relax before the final push.
"For it is up to you and me to take solace in nostalgia's arms
and our ability to create the everlasting from fleeting moments."
- Sanober Khan
Posted by Yoda at 10:07 PM