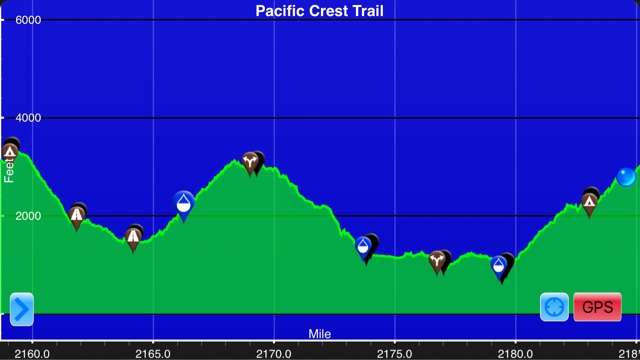 Total up/down: +5,519/-5,990 feet
I prefer to start my day by climbing uphill, but today I had a long gradual downhill. I was slow getting out of camp this morning. It was cold last night and I forgot to turn on my wristwatch alarm. I usually turn it off when I go into town. I didn't wake up until 6:30 and it was almost 7:30 before I left camp. With the days getting shorter I really can't afford such late starts. Halfway down the mounatin I turned off the airplane mode on my phone and discovered that I had cell reception. When I checked my email I found that I had an email from my boss that required my immediate attention. I lost even more time taking care of that.
At the bottom of the mounatin I came across a great water source. I treated a few liters of water and ate second breakfast. At this point I expected that today would be a low mileage day. Usually by this time I have already knocked out seven or eight miles, but today I had barely done four. 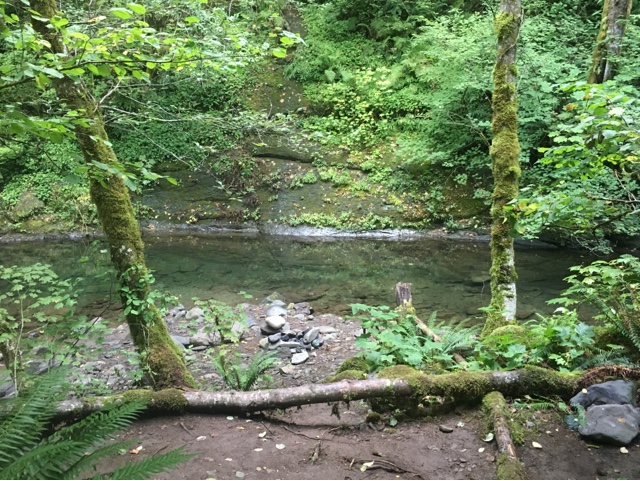 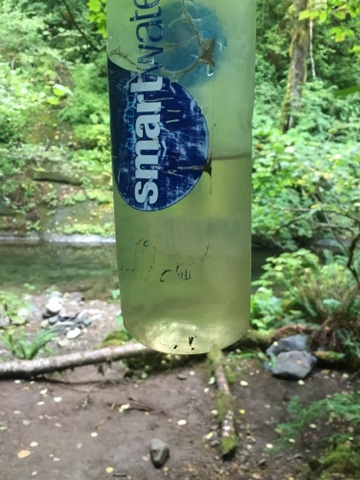 Brownish water from last night
After working so hard to gain elevation yesterday, I lost most of it this morning. After the good water source I began to gain back all of the elevation that I had just lost. The trail was typical pct grade, which meant that it wasn't very steep, but I struggled nontheless. It is a very strange thing, my mind knows that these climbs aren't very difficult. I have done much harder climbs on the AT, but my muscles have forgotten what that is like. Physically, I'm not as strong as I was last year. I think that I'm probably mentally stronger, but that is little comfort to my body. I would spend the next five miles climbing back uphill, regaining all of the elevation that I lost this morning. At the top of this climb I went back downhill losing even more elevation. 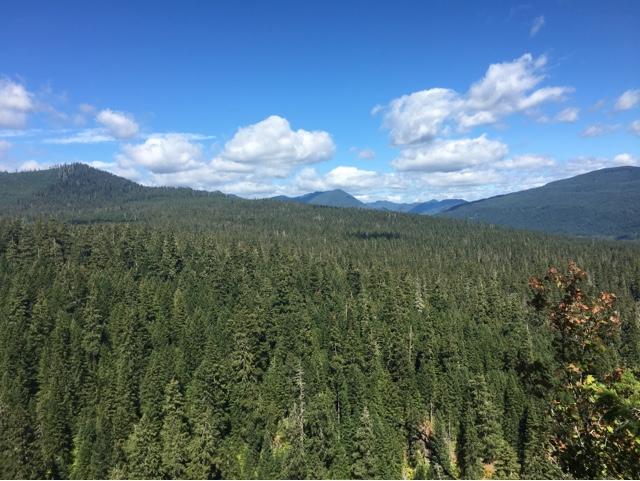 Good view from the top
I just started a new audiobook today, Red Rising. I am really enjoying it. The narrator really brings the story alive. Before I knew it I had finished my second long downhill of the day. I had one more giant climb left, but before I tackled this one I took a long lunch break next to a river. I usually don't eat a proper lunch, instead I just snack all day long. I took advantage of my last grocery store resupply. From here on out all of my resupplies will be via mail drops. I bought a block of pepper jack cheese, salami, and everything bagels. It was nice having such a calorie dense lunch. I washed my sandwhich down with Gatorade and watched some birds swoop around the river. It was all very civilized and relaxing. 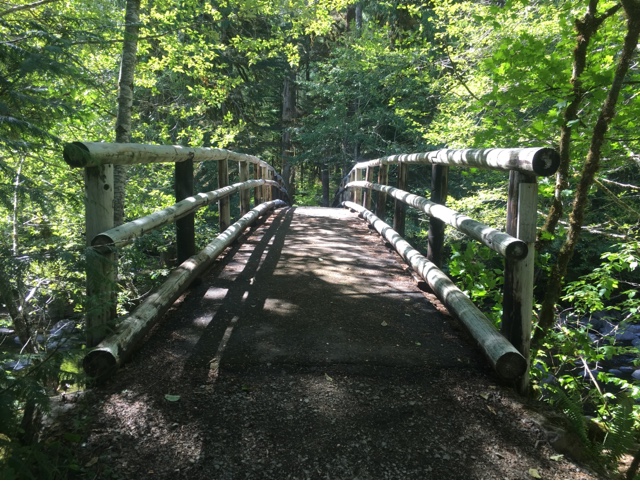 Actual paved bridge across the river
I forgot what it is like to hike through very humid conditions. California and most of Oregon were extremely dry. Since starting Washington it is like somebody flipped a switch. The humidity reminds me of the Appalachian Trail. I stayed soaking wet all day. I'm not looking forward to this new challenge. As a result of the humidity it will feel colder at night and my gear will stay slightly damp all of the time. Plus there will be a whole new level of stink. I am not looking forward to that at all.
I made it through the first section of the climb without a problem. It only became difficult after I had to stop for water. I will be dry camping again tonight, so I had to fill up 3 liters to carry up 2,600 feet of elevation. That means an extra 6.6 lbs at the end of an already long day. It is a good thing that I'm enjoying this audiobook so much. I was distracted through most of the climb and I wasn't weighed down too much by the extra water weight. In fact I made it to my planned campsite way earlier than expected. I was there by six o'clock. I considered hiking for another couple of miles, but with the terrain I was hiking through campsites were few and far between. I didn't want to take the risk of passing by a good campsite and not finding another for a long while. 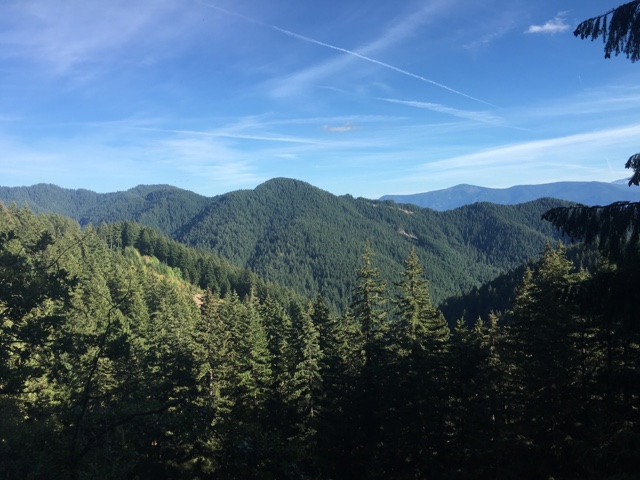 Clear skies
I am camped close to a forest service road. I managed to find a spot in the woods so I'm not actually on the road. As I was setting up a car came driving past on the road. A little while later a southbound hiker joined me. He began to set up on the road. I told him that one car had already driven past, but he did not seem too concerned by this info. After I had eaten dinner and gotten into my tent(it was dark by now), I heard a truck in the distance. It didn't take long before you could see its headlights. The SOBO had to jump out of his tent and flag the driver down before he got run over. He is now in the process of trying to move his tent and find another place to camp. I tried to warn him. It took everything in me not to shout out, "Hey, I told you so."
Mayor and Cat-Fox are camped with me as well. I had some extra salami left over from lunch and with Mayor's permission I gave it to Cat-Fox. Guess who my new best friend is?
I think/hope that tomorrow will be an easier day. Hiking through Oregon has left me soft. I was so hard coming out of N. California. It is just a matter of time until my body and mind readjust to their new reality. I just have to embrace the long uphills followed immediately by long downhills. I also have to remember that things could be a lot worse. I could be back in S. Maine. 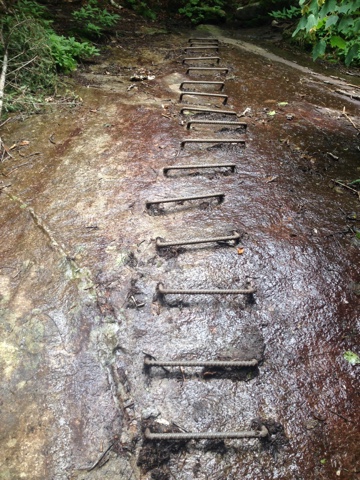 Rebar ladder on the AT 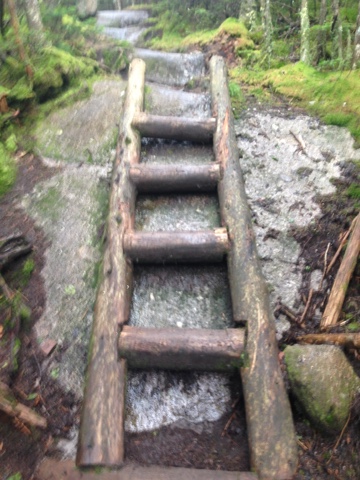 Somewhere in the Whites: Things could always be worse
"Perpetual optimism is a force multiplier."
— Colin Powell
Posted by Yoda at 9:29 AM