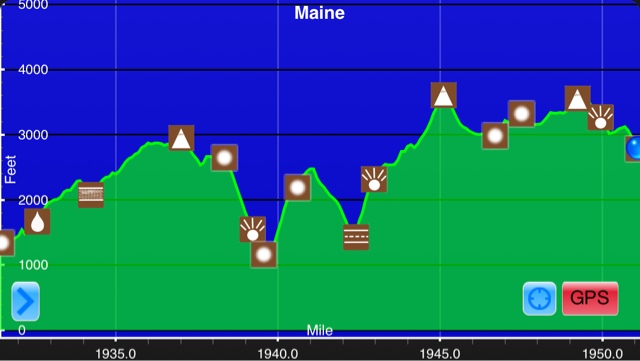 I think the first forty miles of Maine completely traumatized us. Our plan for the day only had us hiking ten miles. Those ten miles didn't look too intimidating on the elevation profile, but neither did the first forty miles in Maine. We got so used to only going one mile per hour that we forgot what it was like to spread our wings and fly.
We managed to get an early start this morning, that almost never happens coming out of town. I was all jacked up on redbull and practically flew down the trail for the first five miles. I stopped briefly at Hall Mountain Lean-to(for some reason the shelters in Maine are called Lean-tos) to filter some water and eat a snack. It had only taken me two hours to go five miles. After leaving the lean-to I went steeply downhill, only to go up an extremely steep uphill. The climb up Moody Mountain is one of the steepest climbs to date. I gained 1,000' of elevation over .4 miles. It wasn't as bad as I thought it would be, but it still sucked. I was thrilled to see that the MATC, Maine Appalachian Trail Club, unlike the AMC, Appalachian Mountain Club, knew how to properly maintain a trail. They installed several things to help improve hiker safety. I really appreciated it. It made a difficult climb marginally easier and a lot safer. 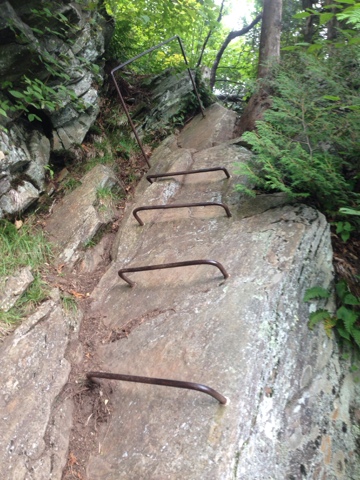 A nice ladder to help scramble up the rocks
The view from Moody Mountain wasn't all that great. It was very hazy out. 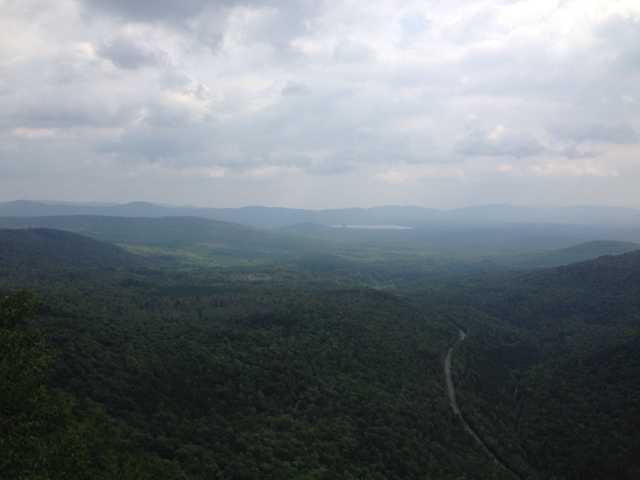 Moody Mountain
The climb down Moody Mountain was very well behaved. It was a gradual decline over semi-decent terrain. Where the soil was eroding the trail maintainers installed rock steps to reduce the erosion and to make the trail safer. After making it  down Moody Mountain I came to South Arm Rd. That was where we had planned on camping for the night. The only problem was that it was noon, I had hiked ten miles in four and a half hours. There was no way I was stopping so early in the day, but everyone else was way behind me. I sat down and had a leisurely lunch by a lovely stream and waited to see if anyone would show up. By the time I finished eating I still hadn't seen anyone else from the group. I left a note for Airlock and told her where I planned on camping for the night, then I pressed on. I had one more big climb for the day, Old Blue Mountain.
Old Blue was almost as steep as Moody and it was 1,200' taller. There were a few difficult sections going up, but nothing too bad. By the time I made it to the top my legs were like jello. I was pretty spent after two tall and steep climbs, but it was still too early in the day to call it quits. 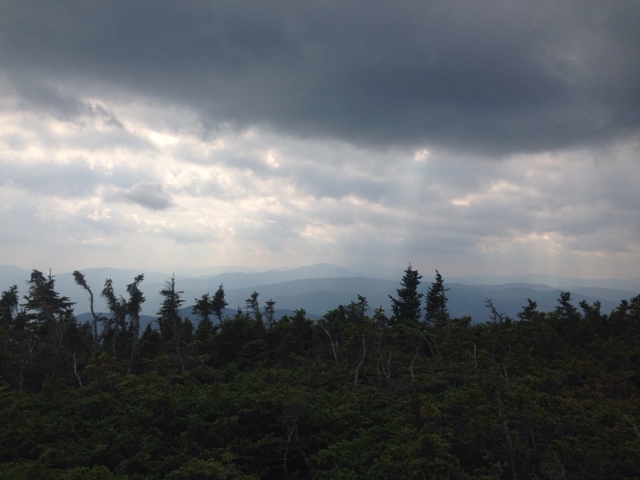 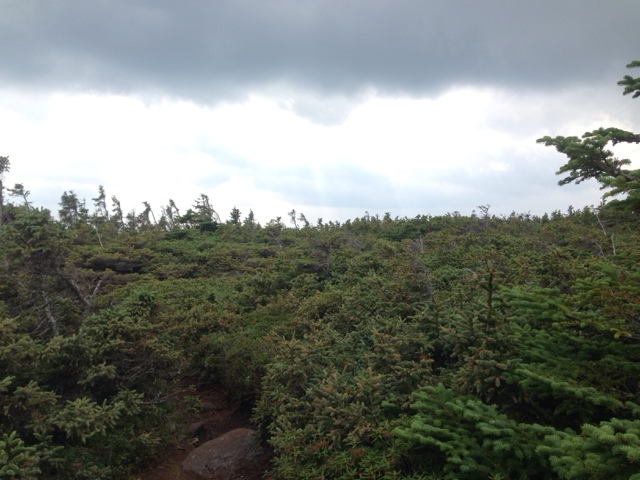 Treeline
The wind was really starting to pick up and since I was just above treeline it wasn't very pleasant to linger at the top. Plus it was too hazy out for a good view. You're my boy, blue!!!!
I was really tired by this point and continued hiking on autopilot for the next few miles. Eventually I came to the spot where I told Airlock that I was planning on camping at, but it was still too early for me to stop. I made a snap decision to push on for the Bemis Mountain Lean-to. Unfortunately, the tail decided to become more difficult shorty after that decision. I'm not sure if it was actually hard, or just hard because I was tired. As I was getting ready to take a snack break, I found a lovely viewpoint with a bench perfectly positioned to take in said viewpoint. 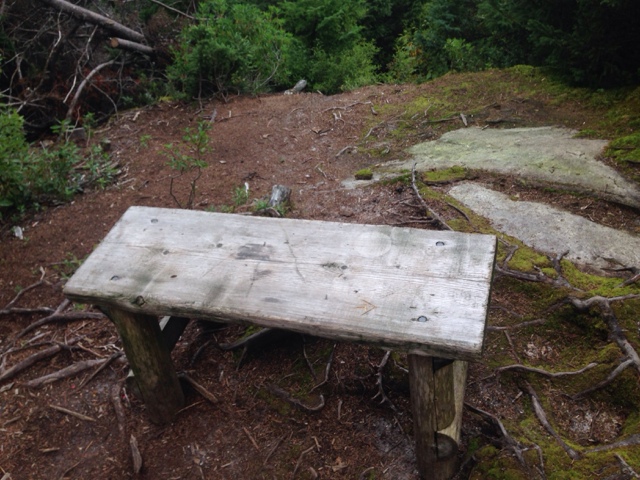 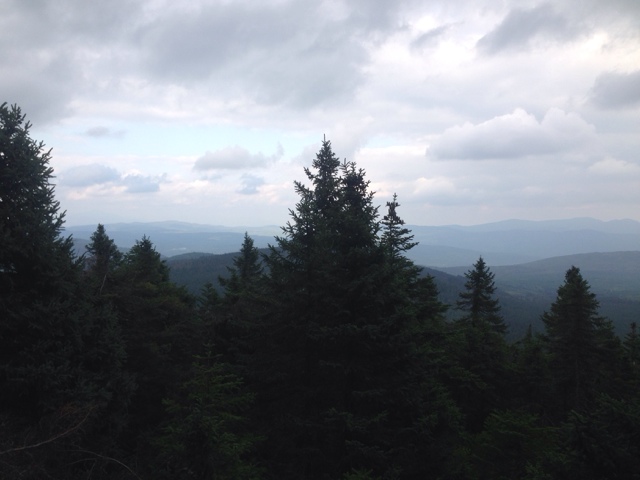 View
It looked like I would make it to the shelter with just enough time to spare before it got dark. What I didn't plan on though, was the top of Bemis Mountain being covered with blueberries. I spent way too long picking and eating as I went. In the end I made it to the shelter with only thirty minutes of daylight remaining. I had just enough time to setup camp and collect water before it got too dark out. I skipped cooking dinner, instead opting to eat some of my lunch food. These days my lunch is comprised of pepperoni, pepper jack cheese, and ritz crackers. I also ate chips and cookies.
After such a long day of hiking, with two steep mountains tossed in, I was asleep soon after getting into my hammock. Airlock ended up camping about four miles short of me. I hope she catches up to me tomorrow. I'm hoping the trail stays nice for me tomorrow. I've heard from, South Paw, that things start getting easier shortly before Rangly. I'm hoping to make it into Rangly tomorrow night so I can resupply, but I don't think that is very likely. That would be another very long day.
"Take a course in good water and air; and in the eternal youth of Nature you may renew your own. Go quietly, alone; no harm will befall you." -John Muir
Posted by Yoda at 8:01 AM