I was not prepared for how cold it got last night. I never put on my base layers and as a result I was cold most of the night. It also didn't help that I fell asleep while writing my blog. I woke up at 12:45 because I was shivering. I hadn't gotten into my sleeping bag before falling asleep.
Laces and I had dreams of doing a 22 mile day. We made plans last night before going to bed. I got up a 5:45 so I could be ready to go around 6:30. It was still really dark out when I woke up,  I stayed in my hammock until it lightened up enough to see what I was doing. We started the morning off by climbing up Chairback mountain. It was very nicely behaved. Most of the hike up was up stone steps. The tricky part of Chairback was the giant boulder field on the way down. It was really sketchy because of last nights rain. We finally made it back to level ground, but we were off of our projected mph. We kicked it into high gear and cranked out the next four miles pretty quickly. The semi level ground helped, but it was also really sloppy trail. We each fell down a few times, but nothing too bad. Laces said my fall was one of the most graceful see had ever seen. By the time we made it to the river crossing I considered just keeping my shoes on, my feet were soaking wet anyway from stepping in so many muddy puddles. I decided to go ahead and put my sandals on. The river rocks were very slippery and I didn't want to take the chance of falling in. The West Branch of the Pleasant River was a pretty easy crossing for a wide river. Even with last nights rain it was only shin deep. 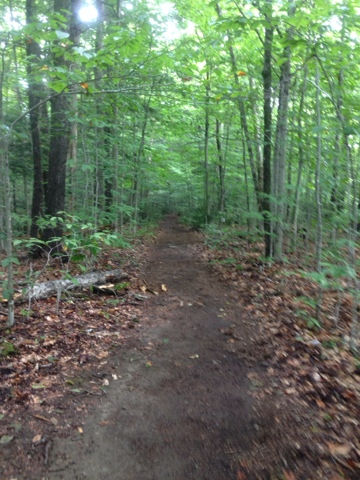 Nice trail for a change
After crossing the river it became obvious that we wouldn't make it 22 miles. We reassessed our plan and decided to aim for a more manageable 17 mile day. Just before our first real climb of the day, Gulf Hagas Mountain, we came across a sign with the remaining miles to Katahdin. It was the first sign like that in hundreds of miles. 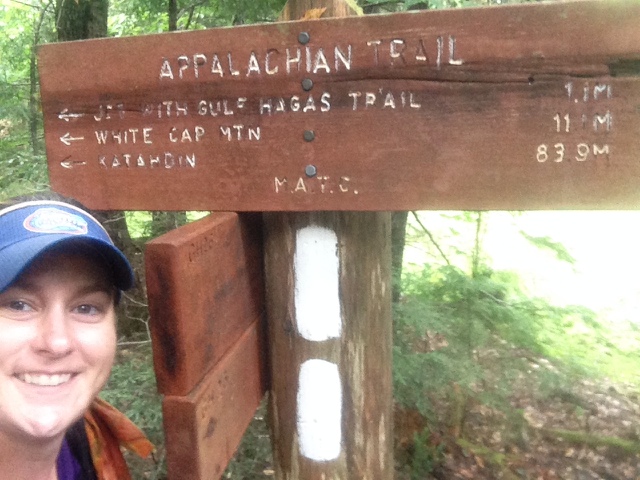 It was actually 82.1 miles away
We had Katahdin on our minds all day. It is all anyone can talk about. Later in the day we would get our first view of it, we were all stoked and I think that's what kept us going most of the day. The climb up Gulf Hagas was pretty difficult. Once again, rocks, roots, and mud were to blame. They should change the state motto to, Rocks, Roots, and Mud. 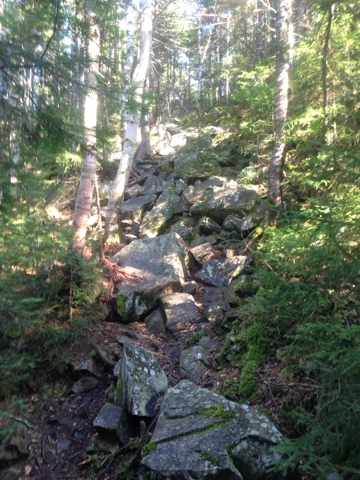 My favorite
The climbs up West Peak and Hay Mountains weren't as tough, but they quickly zapped the strength from our legs. I hiked most of the day with Blade. He is a lot faster than me, but anytime that he got too far a head of me, he would wait for me to catch up. 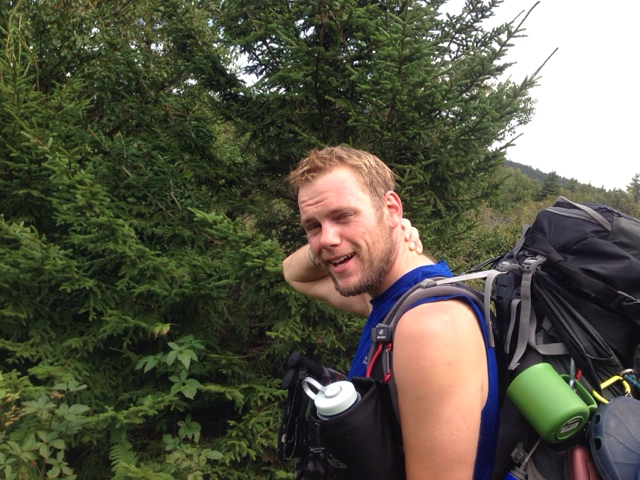 Blade
Our last real mountain until, Katahdin, was White Cap Mountain. After this we only have two more mountains left before the end and they are both under 1,500 feet. The north side of, White Cap, has the view of Katahdin, so I practically flew up the mountain. This was the moment I had been waiting for all week long, the first glimpse of my final destination. The sky was party cloudy and more than a little hazy, but I could still see her in the distance, like a beacon guiding me home. 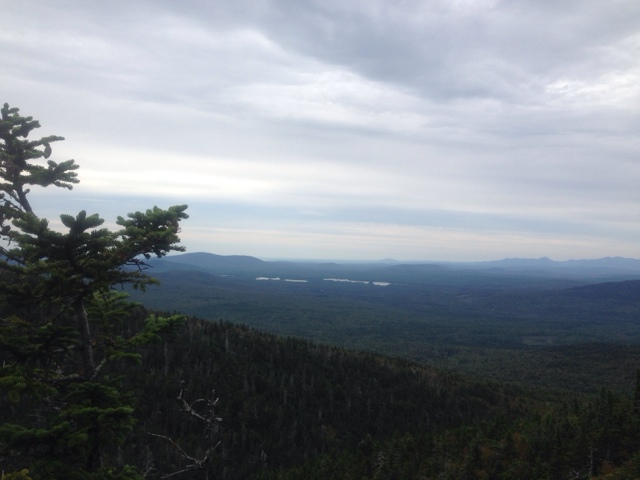 Far peak in the distance, barely visable
I took my afternoon snickers break staring out in the distance. It was hard to tear my eyes away. My end goal is literally within sight. Finally I had to start moving. There was a one hundred percent chance of rain tonight and I wanted to get setup before it began. The shelter area is filled way past capacity again tonight. Blade, Click, Pie, Cheese Beard, and Clarity all have a food drop being delivered early tomorrow afternoon. Poet from, Shaw's hostel, is dropping off their food resupply at one of the few forest road crossings. Laces and I elected to carry all of our food for the wilderness instead of relying on a drop. We are shooting for a 23 mile day. From here on out it should be easy hiking, except for the roots, rocks, and mud. The elevation profile looks ridiculously flat from here on out. Since it's going to rain all morning and be cold, we won't be taking any breaks. I feel like we can hit this goal.
"After more than two thousand miles on the [Appalachian] trail, you can expect to undergo some personality changes. A heightened affinity for nature infiltrates your life. Greater inner peace. Enhanced self-esteem. A quiet confidence that if I could do that, I can do and should do whatever I really want to do. More appreciation for what you have and less desire to acquire what you don’t. A childlike zest for living life to the fullest. A refusal to be embarrassed about having fun. A renewed faith in the essential goodness of humankind. And a determination to repay others for the many kindnesses you have received."
–LARRY LUXENBERG
Posted by Yoda at 4:06 AM