Once again it didn’t get as cold last night as I thought it would. I did have trouble sleeping though. My legs were extremely achy, but that was only half the problem. I was camped relatively close to a trailhead and a couple showed up after dark. I could hear them arguing from .3mi away. Eventually they decided to take a stroll down the trail towards me and they were arguing and cussing at each other the whole way. It was very disconcerting. They walked right past my tent and that put me on edge. Last year on the AT a man was stabbed to death and a women severely injured. I would be lying if I said that wasn’t on my mind listening to a domestic disturbance feet away. There was also a farther and adult daughter camped 100 yards from me, so that made me feel a little safer than if I had been alone. Eventually they walked back to their car and drove away and I finally fell asleep. It took me a little bit longer to get going this morning because I was tired. I really wasn’t looking forward to hiking today. I thought about walking the road into Silverton, eleven miles away and the hitching to Molas Pass. I’m so close to finishing that I didn’t want to miss the miles or a section I haven’t seen before. Now that the section has been done I can honestly say I made the wrong decision. This section was fifteen miles of pure misery. 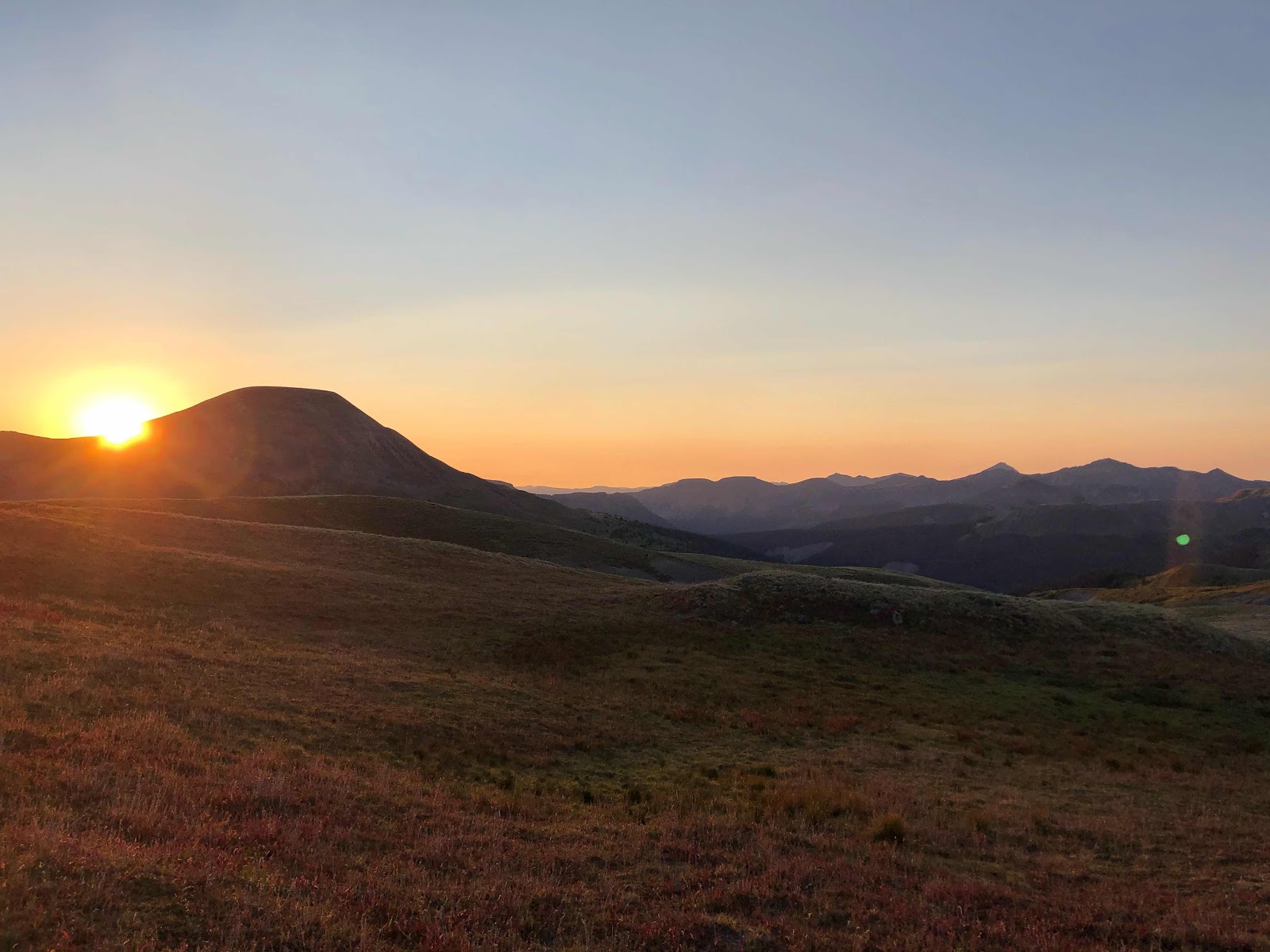 Sunrise
The day started off well. I hiked up a few saddles and dropped back down into a few basins. It felt like yesterday and the views were breathtaking. The comments on my hiking app, GutHook Guides mentioned a large herd of sheep in the area. I came across them after about four miles. Sheep herding dogs can be very aggressive, but the sheep were on a distant ridge so I didn’t have to worry. Just as I saw the sheep I came across what looked like a stray dog. It had on a collar, but no tags. He was very friendly, but he was so skinny he looked like a bag of bones. I had just decided he wasn’t a herding dog, but a stray. I wasn’t sure what to do. He followed me for a little while, but I couldn’t get him to climb the hill I was going up. I thought about getting him to follow me back to Stony Pass Rd and seeing if I could get a hitch to town with him. Then I thought maybe he was a herding dog after all. I finally decided to hike on. Just as I got to the top of the climb I came across another hiker going the opposite direction. She had come across some sketchy trail and decided to turn around. I told her about the dog and she confirmed that it wasn’t a stray. She saw it herding the sheep yesterday. Sure enough the longer we talked I watched him rejoin the herd and start herding the sheep. We couldn’t get over how skinny he was for a working dog. She told me a little of the sketchy trail coming up and tried to get me to turn around with her. She was also a triple crowner(so SHR was an experienced hiker) and in retrospect I should have listened. I just wanted to see a new part of trail I hadn’t done before. 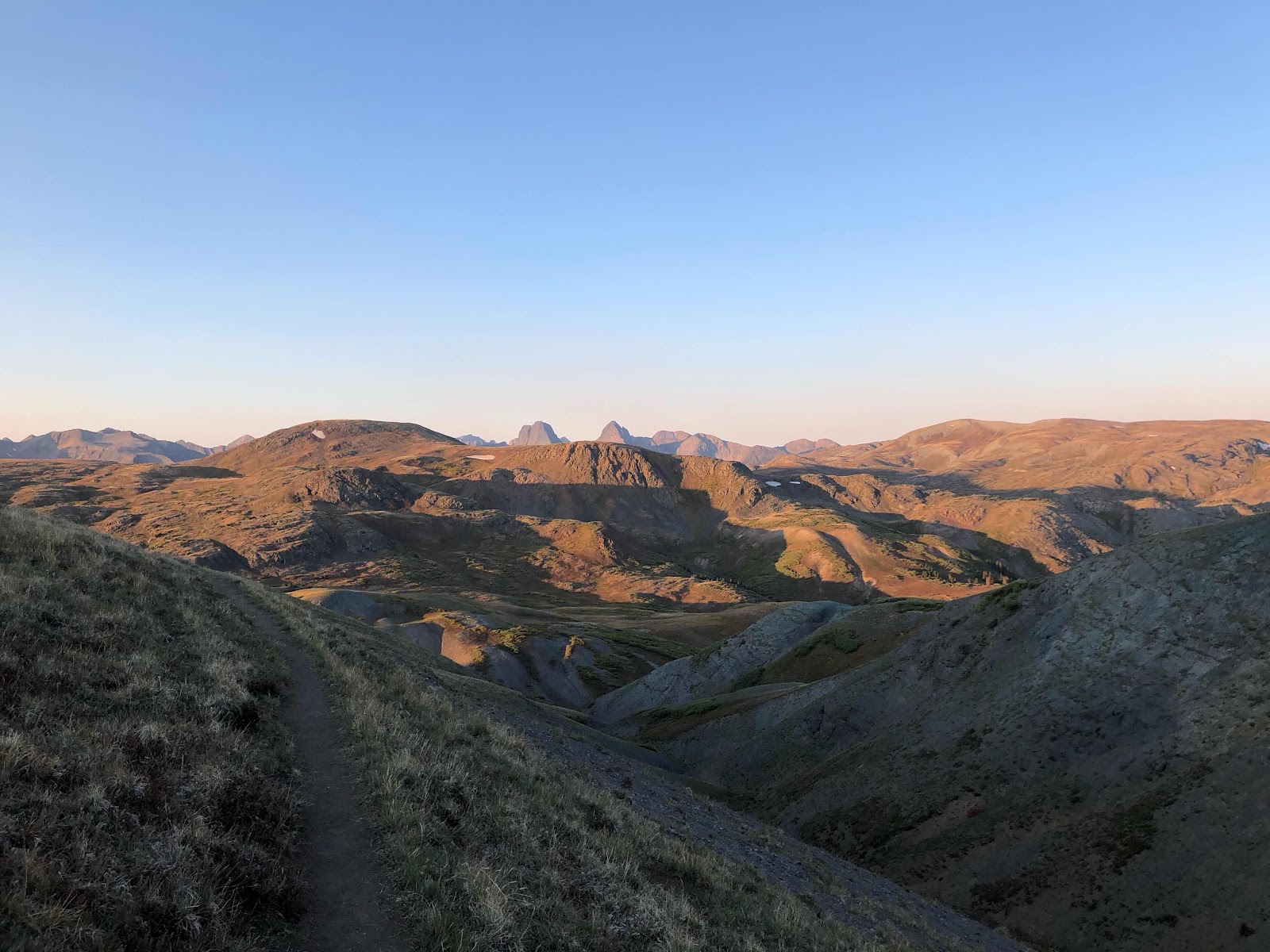 Good start to the day 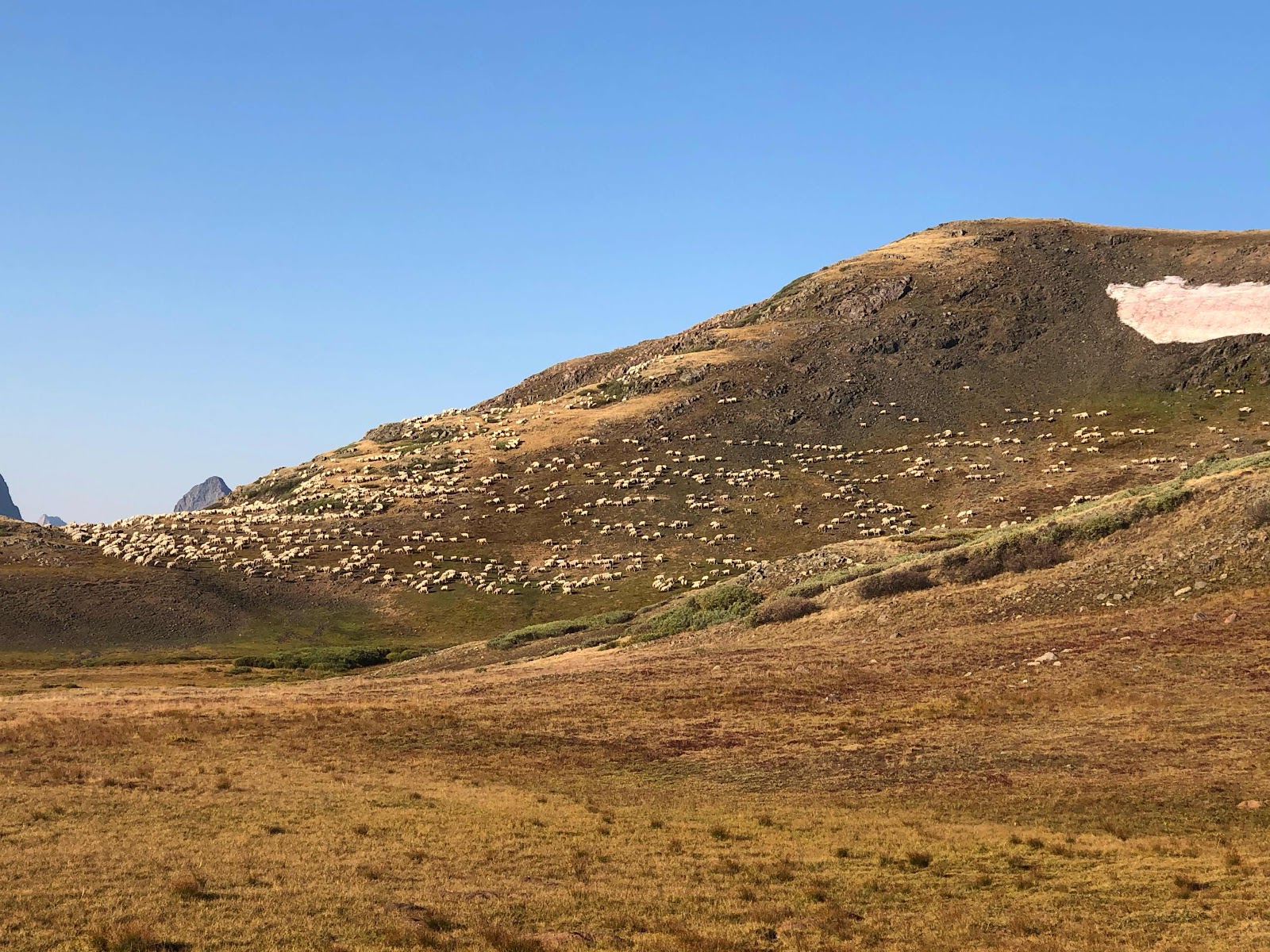 All of those white dots are sheep 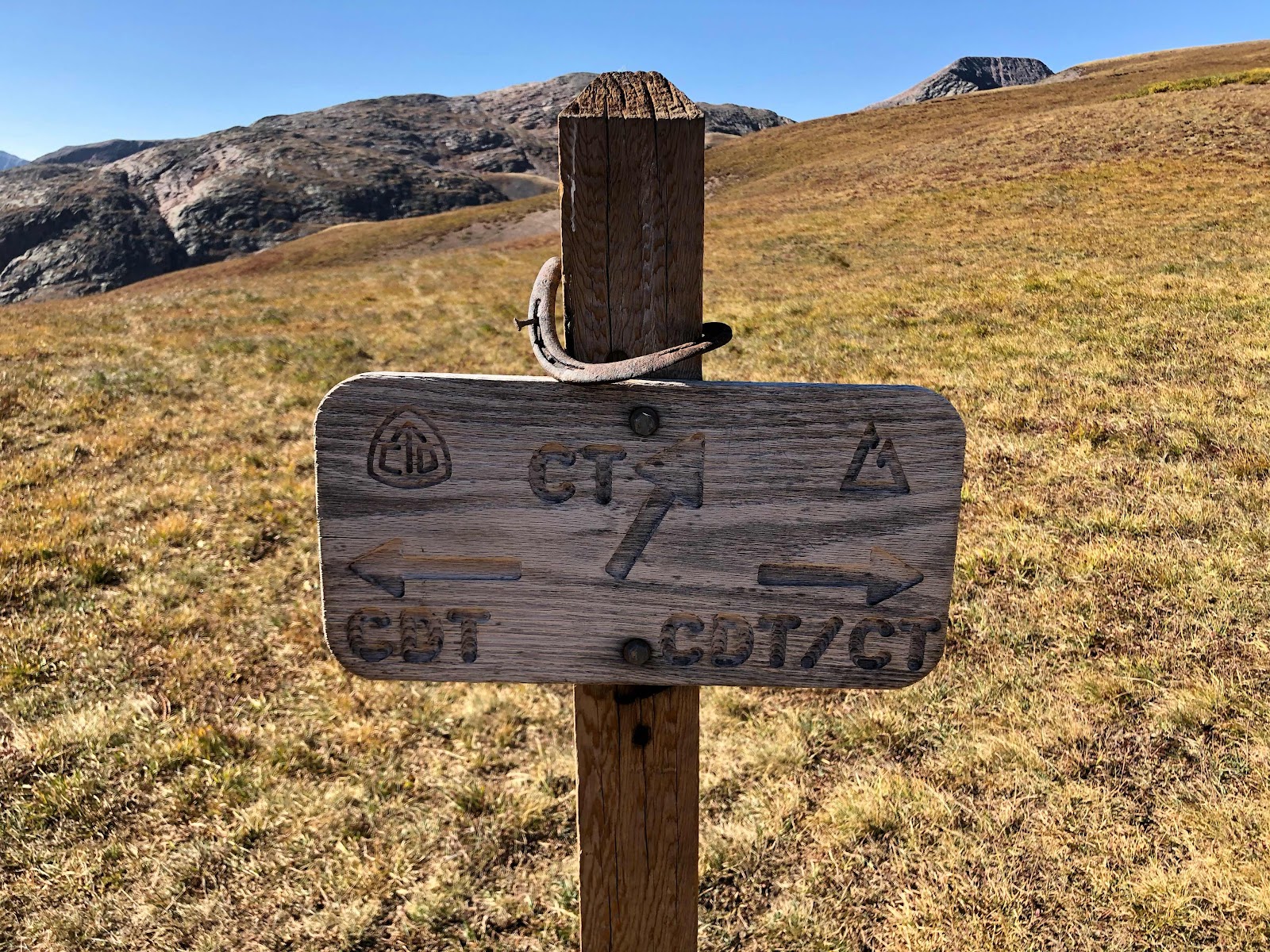 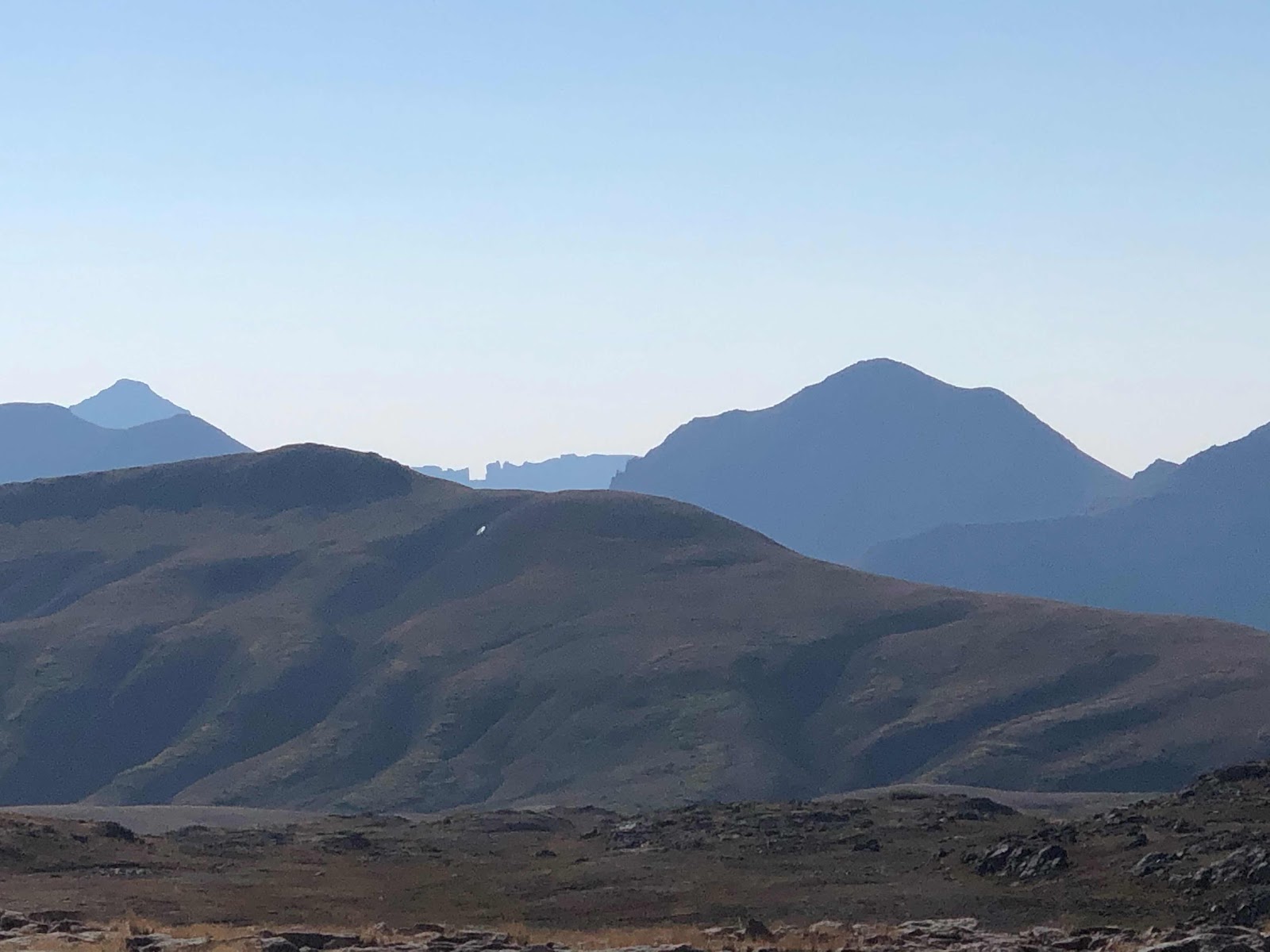 Distant ridge has a feature called the window. I was obsessed with this on the cdt
Shortly after splitting away from the CDT my day went to shit. I knew I was going to drop a massive amount of elevation, but I didn’t expect it to be so steep and on crumbling rock. For miles I tiptoed down crumbling rock with a very steep drop off. For a few sections I was doing less than one mile per hour. The lower I dropped in elevation the hotter it became. It felt like ninety degrees in that canyon. 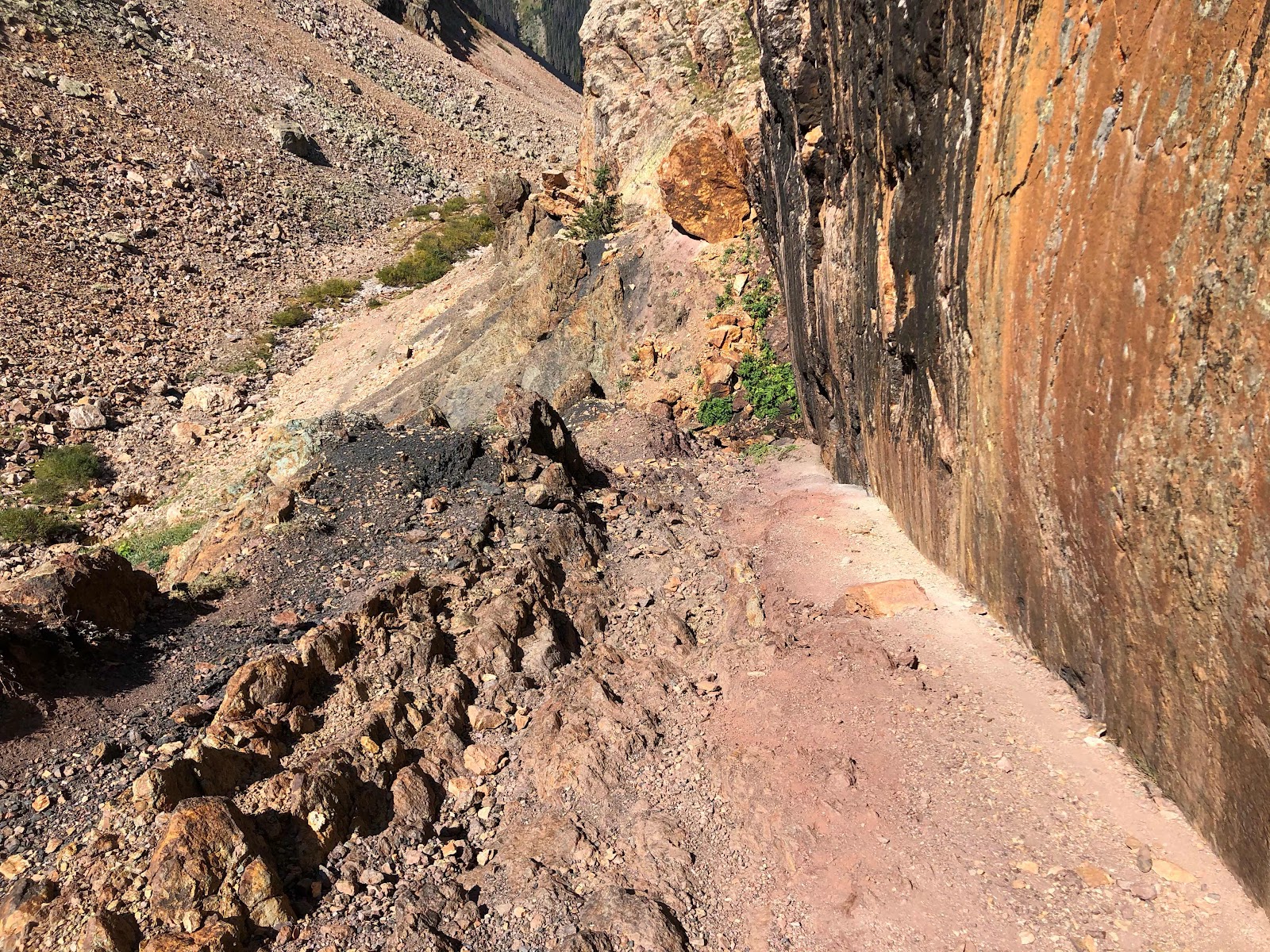 Hours of going down terrain like this
After several hours of this I almost turned around and went back to Stony Pass. I’m still not sure why I didn’t. I guess I just don’t like to lose/quit. It took me about three hours to go three miles. Every step I could have fallen down and some of those falls could have ended badly. I managed to stay on my feet, but I had a few close calls. I finally hit solid ground and starting making good progress, for about a quarter mile. Then I hit the path of an avalanche from a few winters ago. I spent the next five miles or so alternating between avalanche debris and steep crumbling rock. 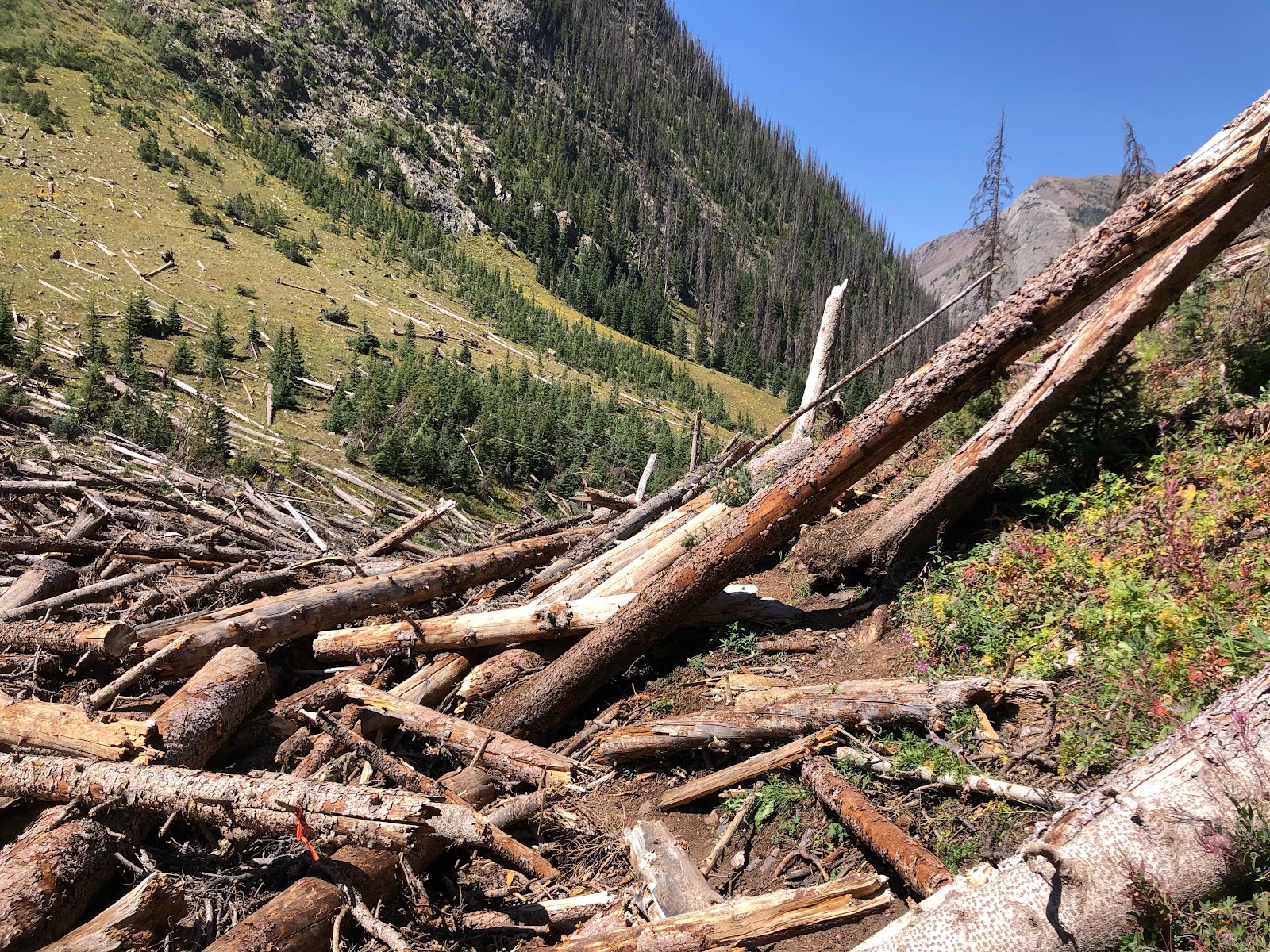 This field was only 300 yards 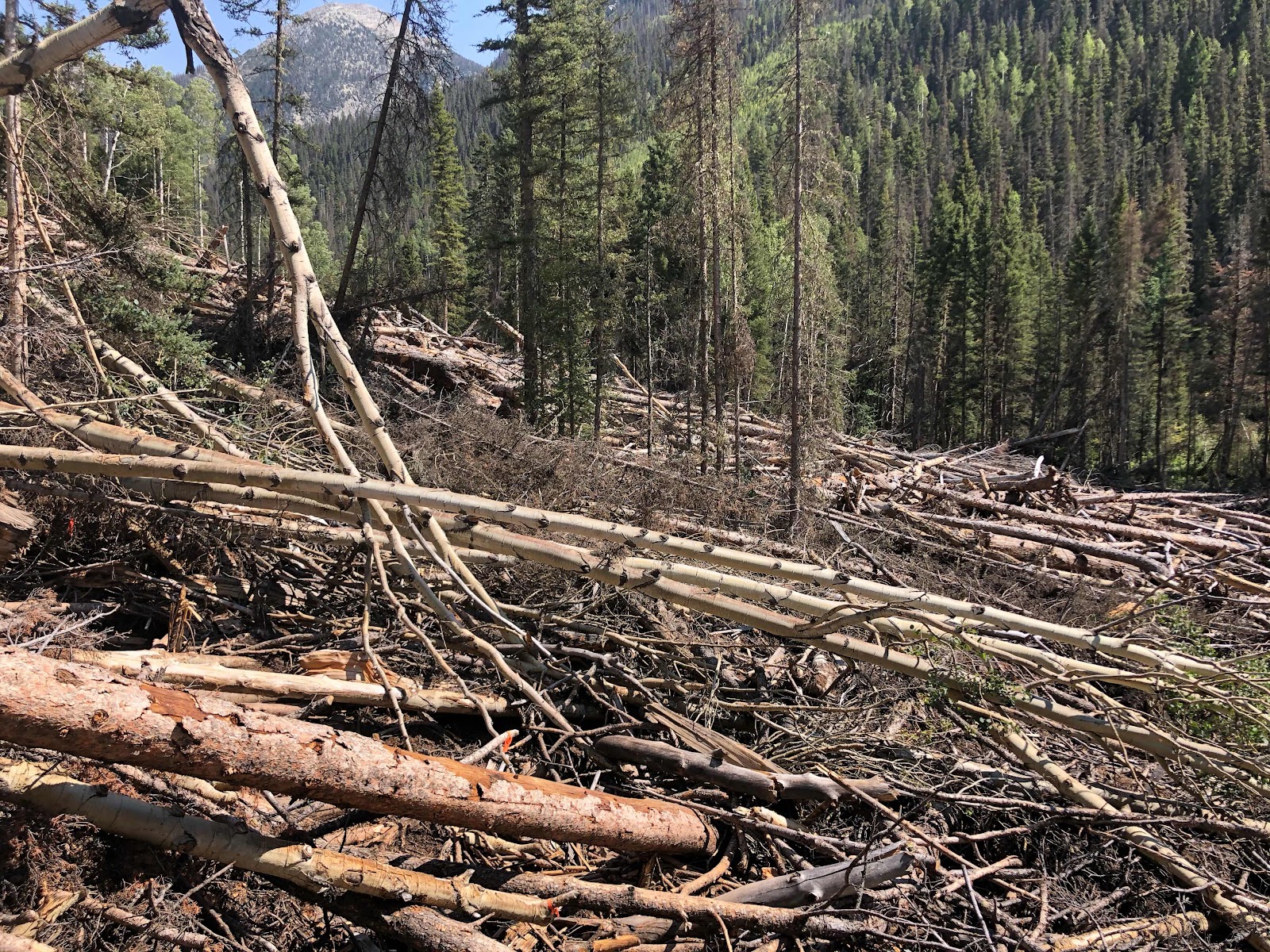 About half a mile 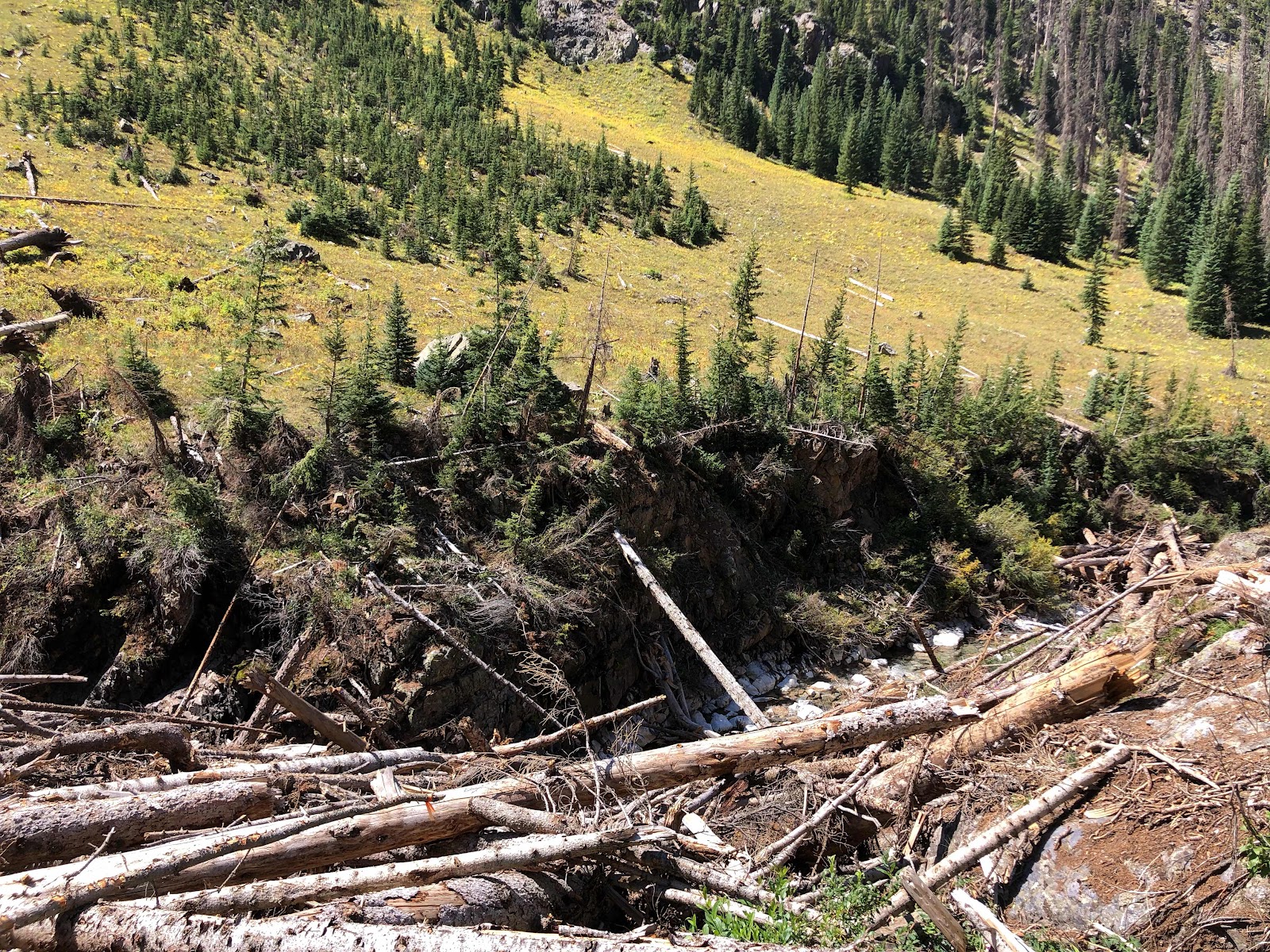 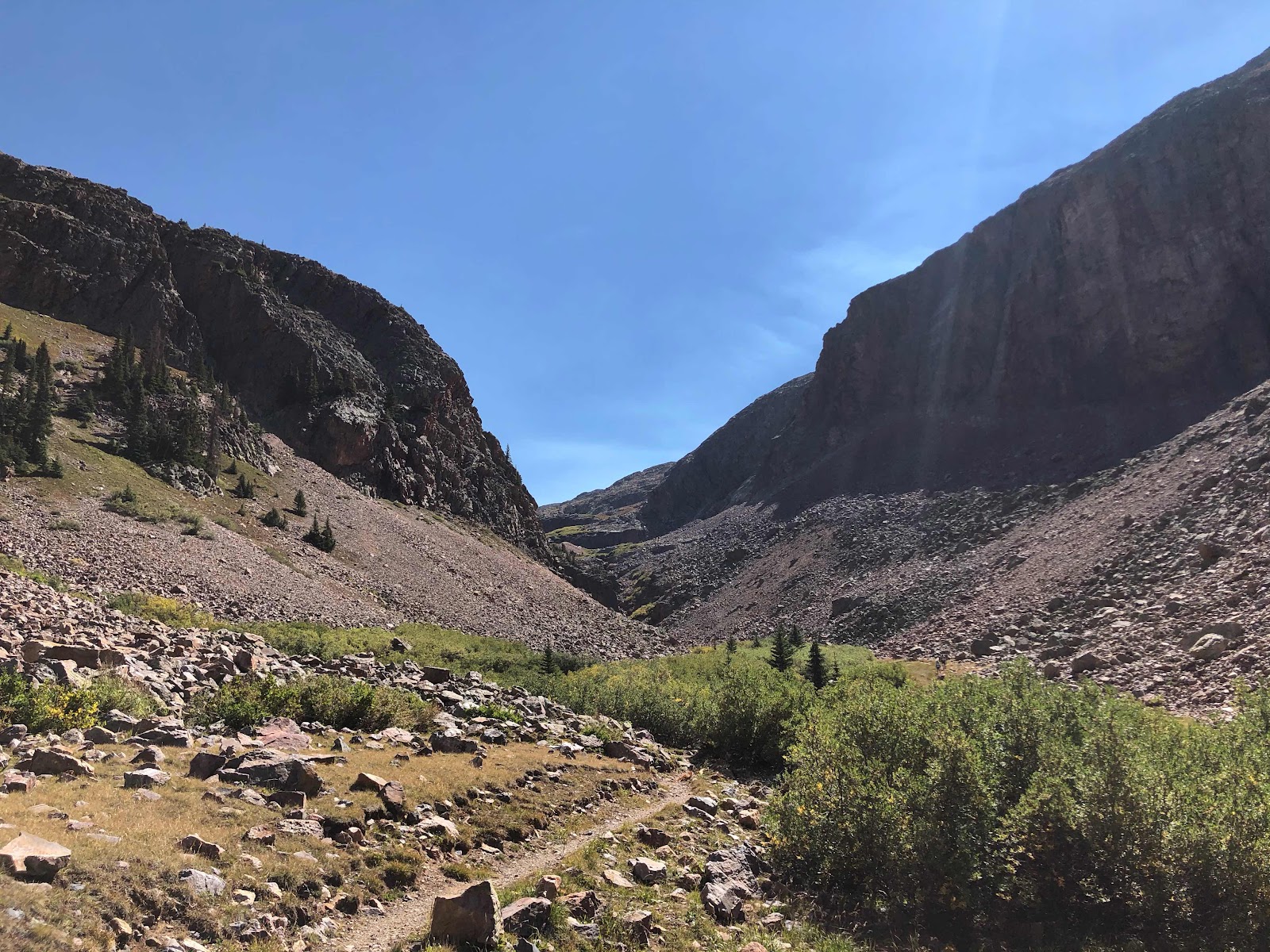 View back at where I started. All that rock is scree 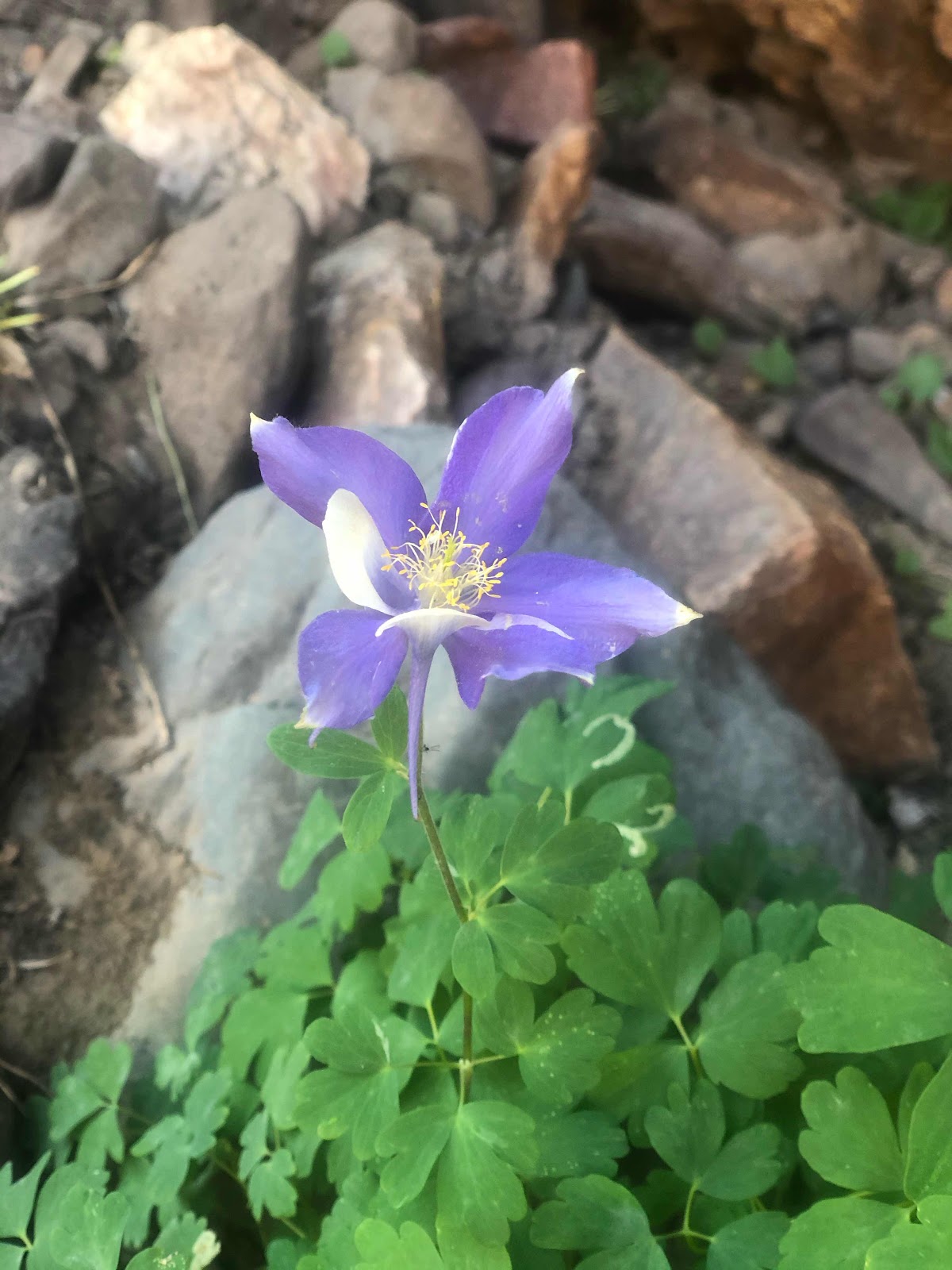 Lonely Colorado Columbine on my way down
I followed a creek the entire way down from 12,500ft to 8,900ft. I really thought it would be scenic, but I was just frustrated all day. After almost ten horrible miles I finally bottomed out. If it wasn’t for the avalanche damage I would have had the option of jumping on a train to take me into Silverton. Unfortunately, the train isn’t running this year because of damage to the tracks. On a normal year hikers can flag down the train and go into Silverton or Durango. After a long, hot, miserable morning and afternoon, an evening in town would have been delightful. Instead I got to the train tracks at 4:30pm and had a 2,000ft climb to take me out of the canyon. At the end of the climb I had the option of hiking .7mi off trail to get to a major lake with a campground. I thought that would make a nice end of the day. I was even willing to pay $20 for camping. I made the decision to hike the extra 1.4mi round trip. What I didn’t count on was this is Labor Day weekend. The campground was completely full. They had no room for a smelly, dirty, exhausted hiker. The rude lady at the camp store wouldn’t even sell me an ice cold beverage. I left utterly defeated. There was no camping for the next mile and a half, so I did the only thing possible, I kept going. The trail crossed a major highway, US 550 at Molas Pass, before hitting a dispersed camping area. Little Molas Lake dispersed camping area is a place I have car camped at before. I actually hiked a 10mi segment of the CT last year. From the highway to the camping area is .7mi on trail. Since I had hiked an extra 1.4mi to get to Molas Lake campground I did not feel bad about hitching the .7mi into Little Molas Lake. I realized after the fact that by hitching I missed my water source for the night. Usually I would play it cool and yogi water from a car camper. I was not in the mood to play games. I just walked right up to a large group and asked for water. They were really nice and gave me not only water, but an ice cold Coke. All of the camp spots were taken, so I’m camped on a slant next to the privy. At least I have a Coke! If any hikers out there are reading this, I highly recommend skipping segment 24 of the Colorado Trail. There are plenty of other trails from Stony Pass that you can take instead. 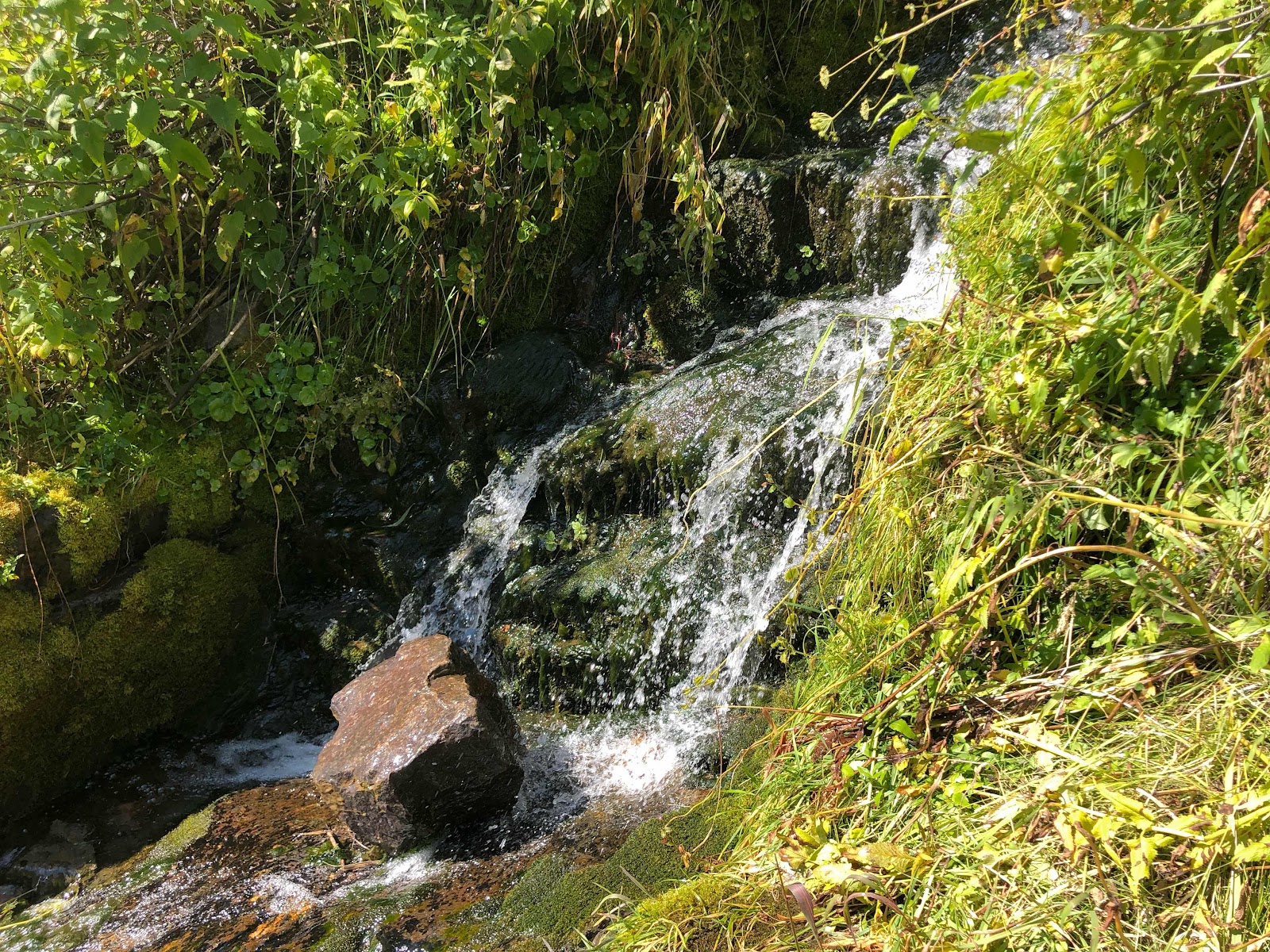 At least water was ice cold and easy to collect today 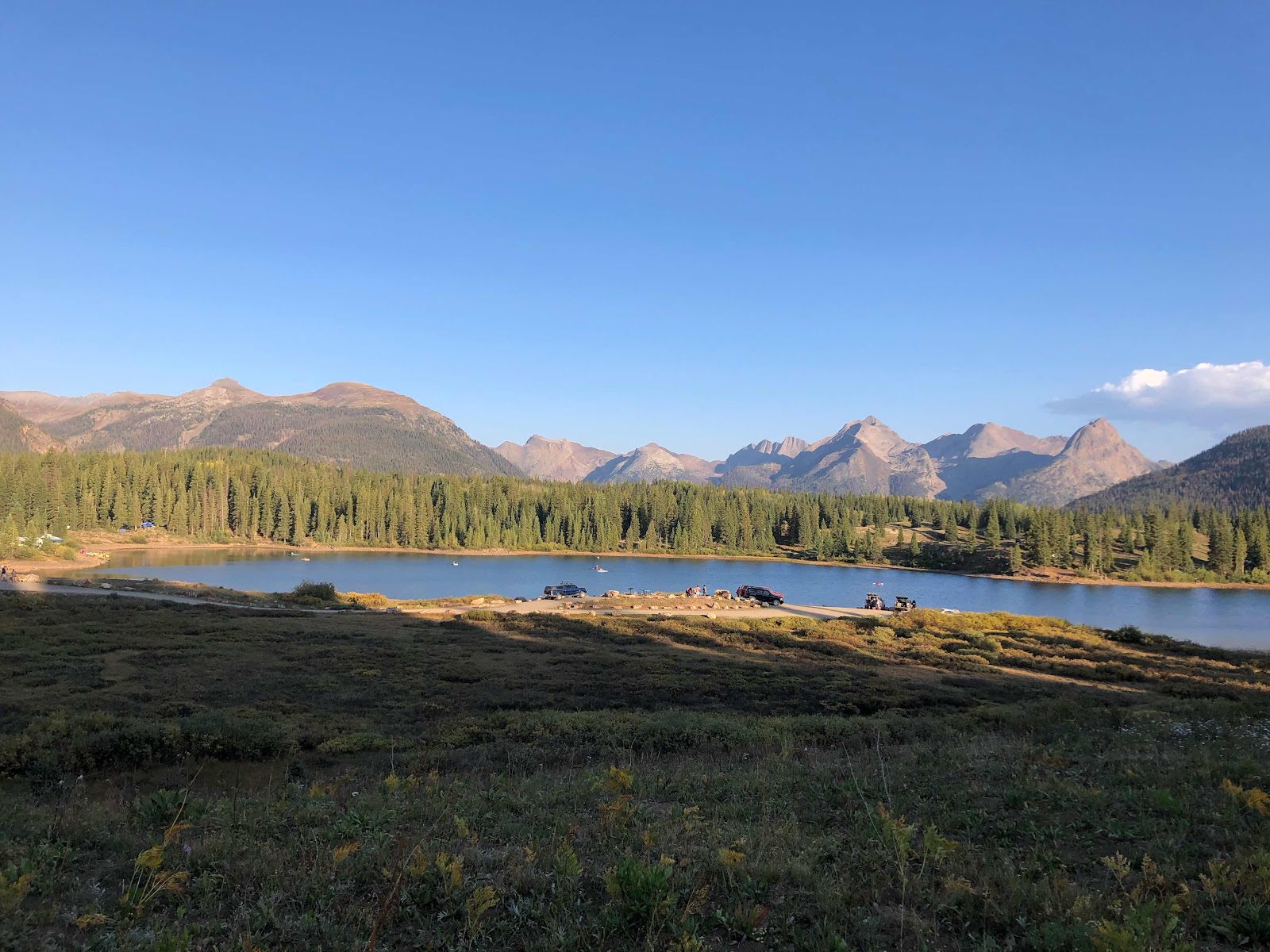 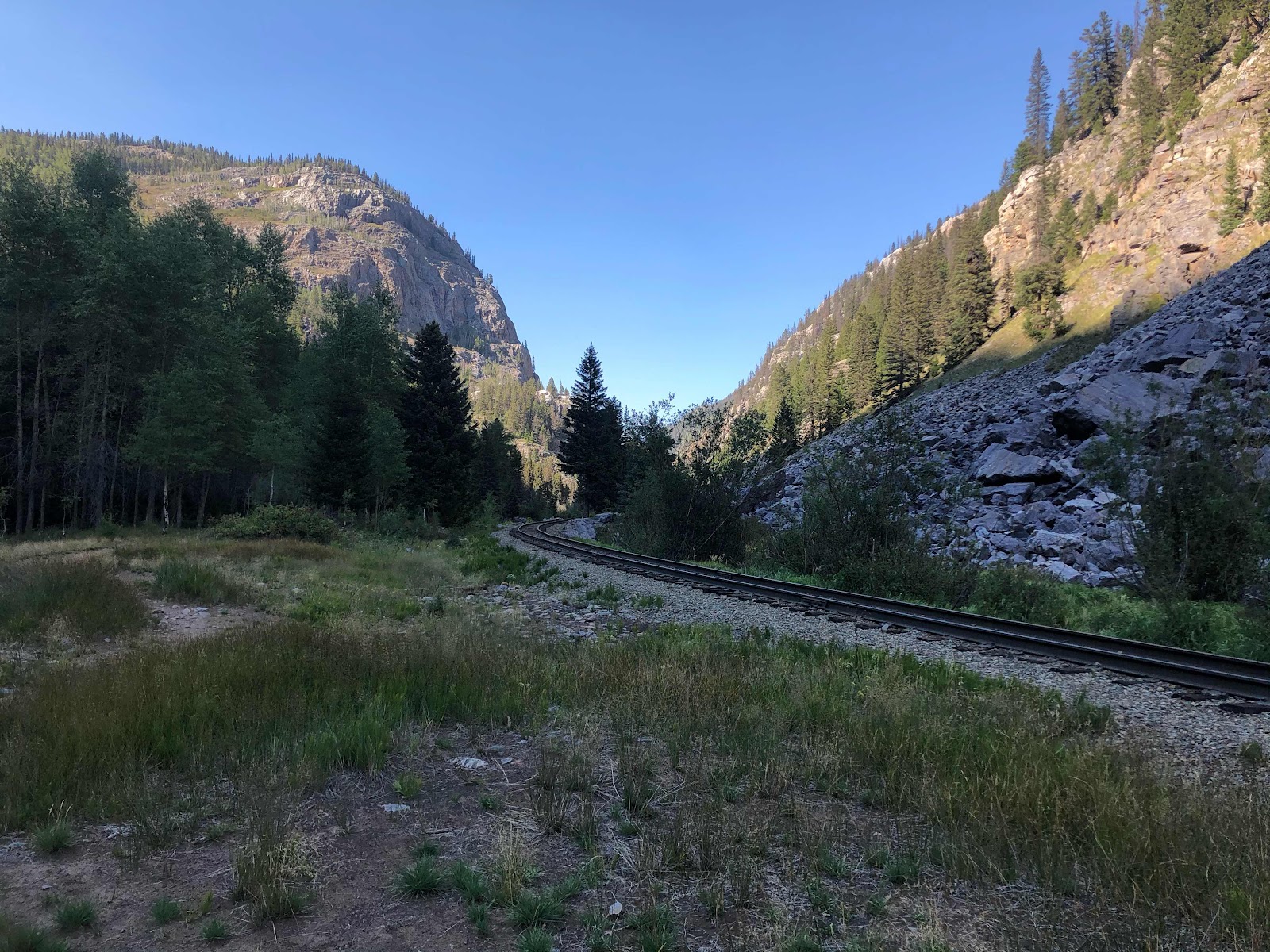 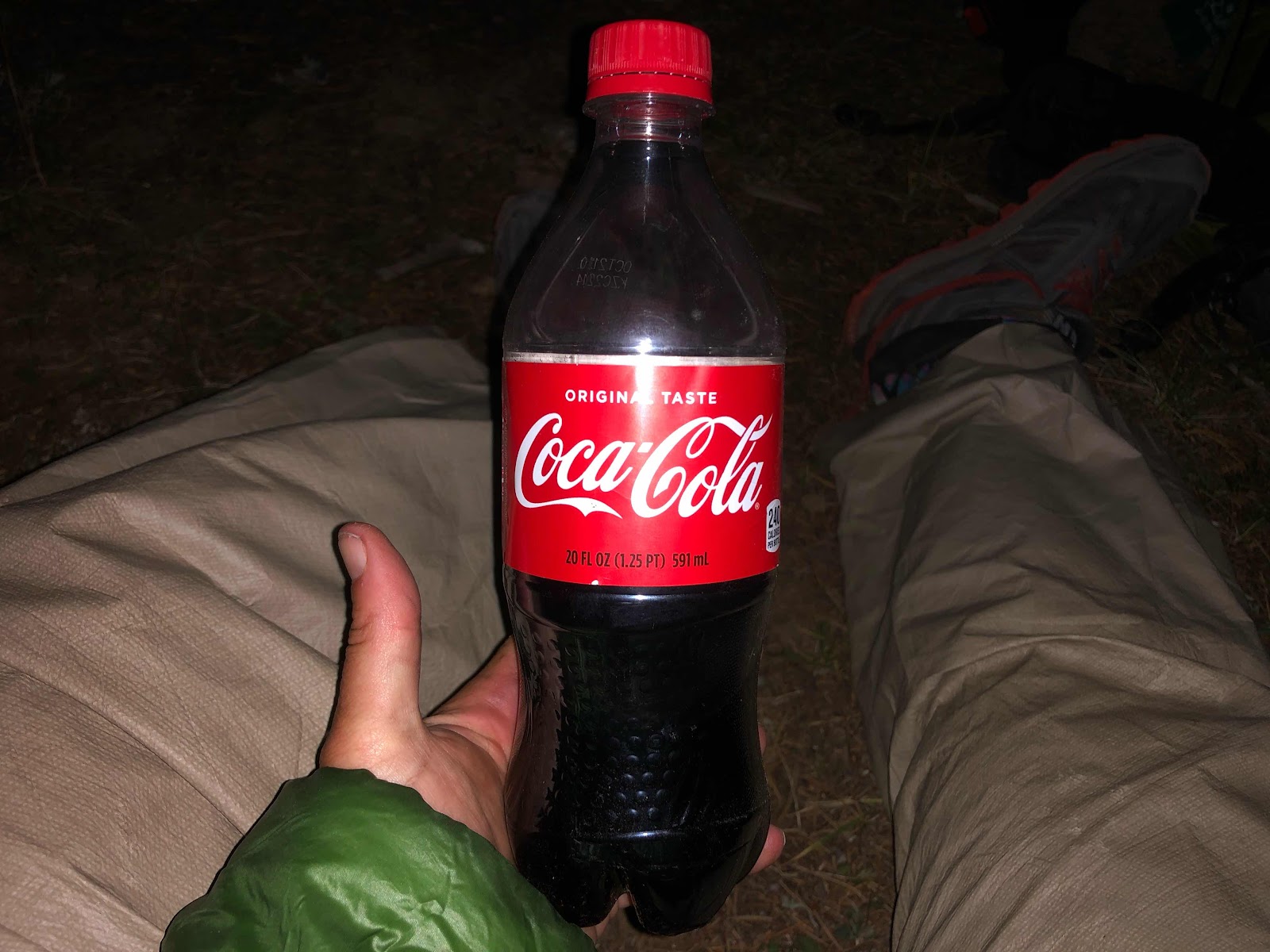 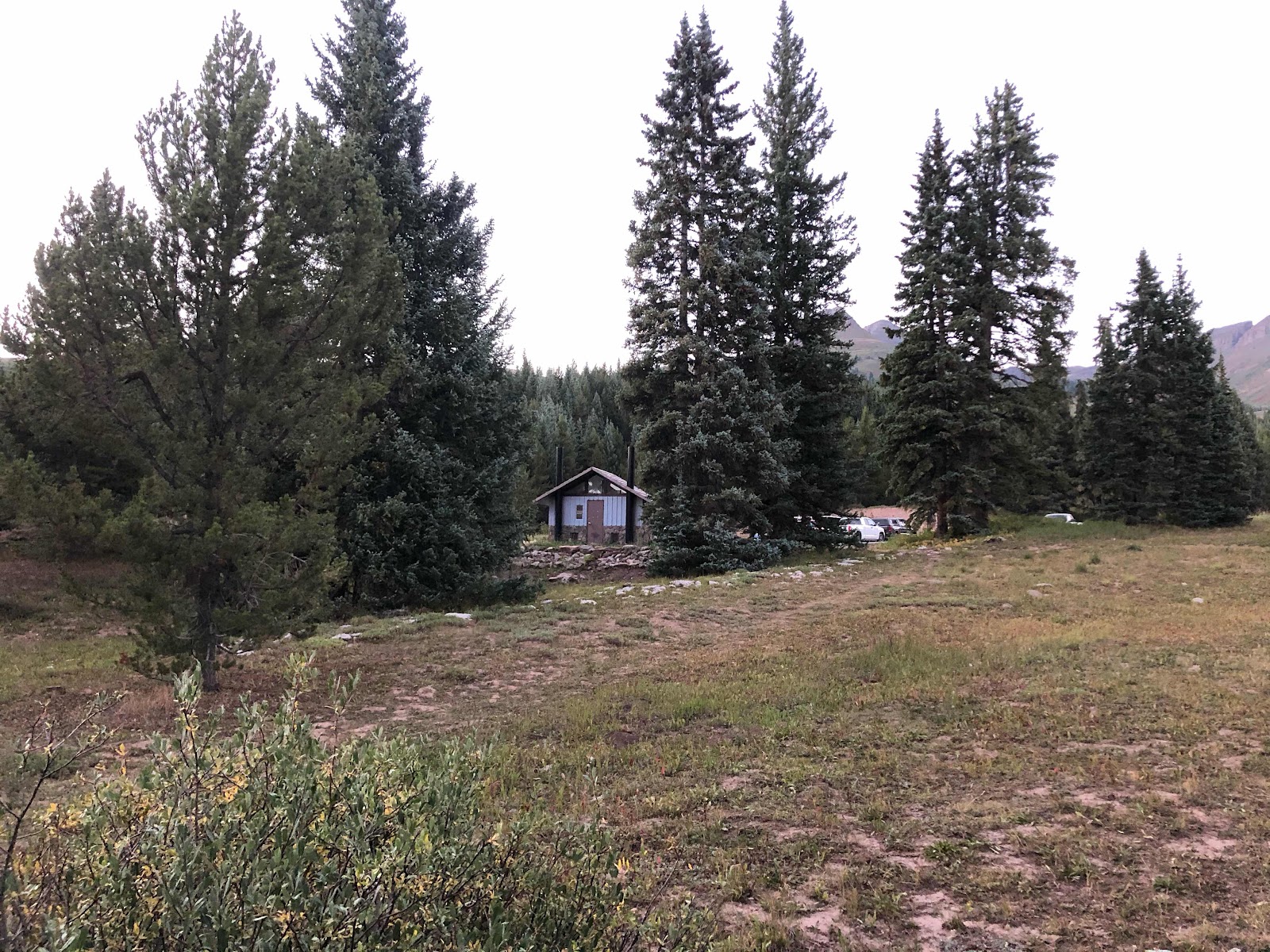 Camped behind the privy

“We may stumble and fall but shall rise again; it should be enough if we did not run away from the battle."
- Mahatma Gandhi